After my first day in Copenhagen was spent mostly indoors, nicer weather on my second day meant that I could spend it wandering around the city.

After another massive hotel breakfast, I headed to Rundetaarn, a round tower located just a couple of blocks from my hotel, Hotel Skt. Petri. 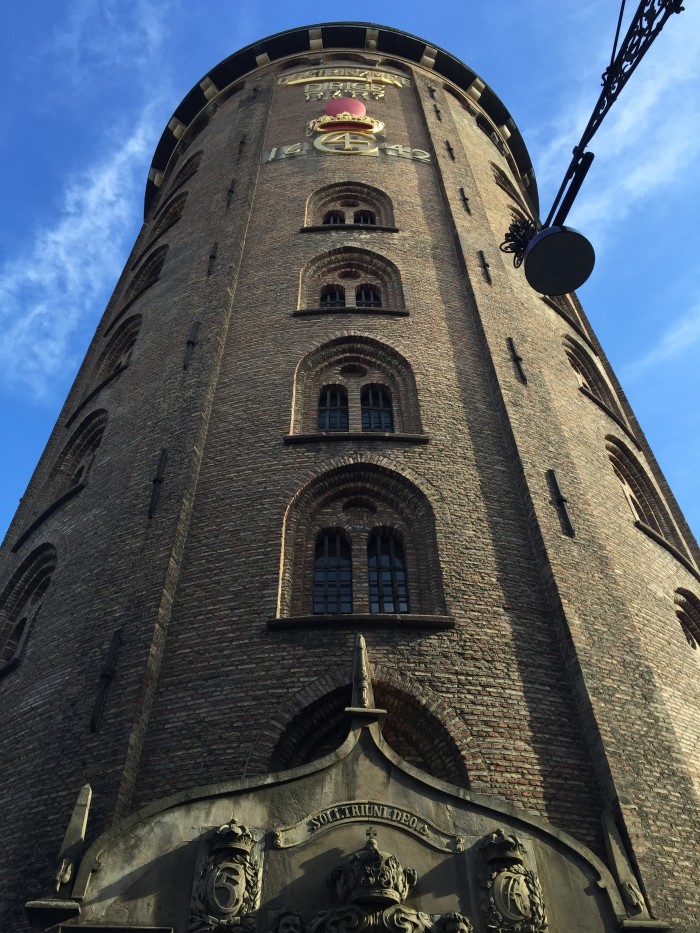 The tower is accessed via a somewhat gently-sloped ramp. As gentle as it is, I still wouldn’t recommend it in a wheelchair, though I did see one person attempting it. I hope that the person with them made sure they were under control on the way down. 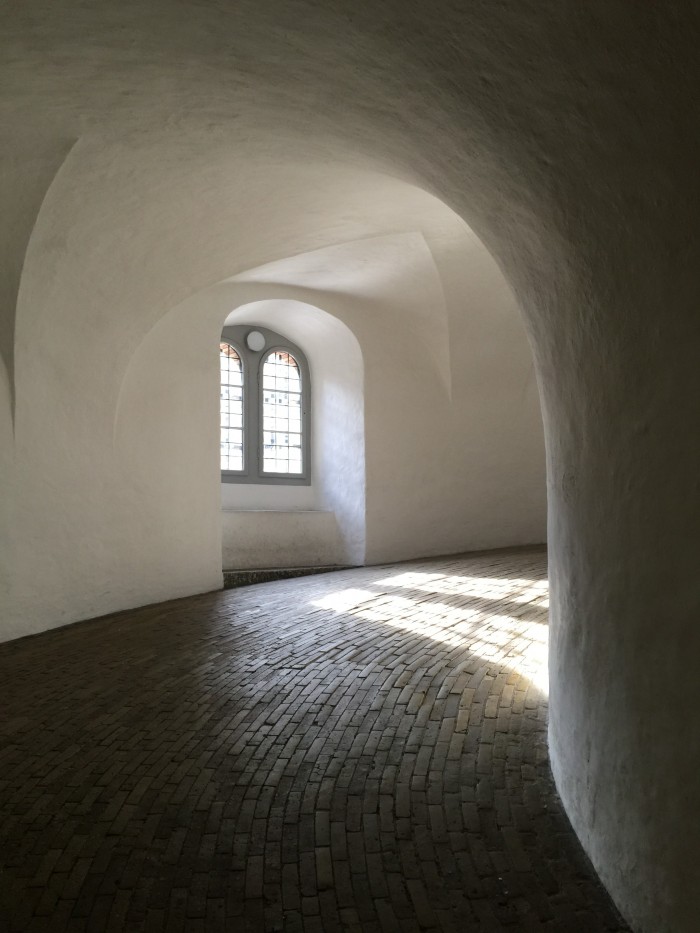 The Rundetaarn is attached to a church. There are some other exhibits inside as well, though nothing that is particularly memorable. There is a telescope inside, but I can’t imagine it works all that well with all of the city lights surrounding the building. 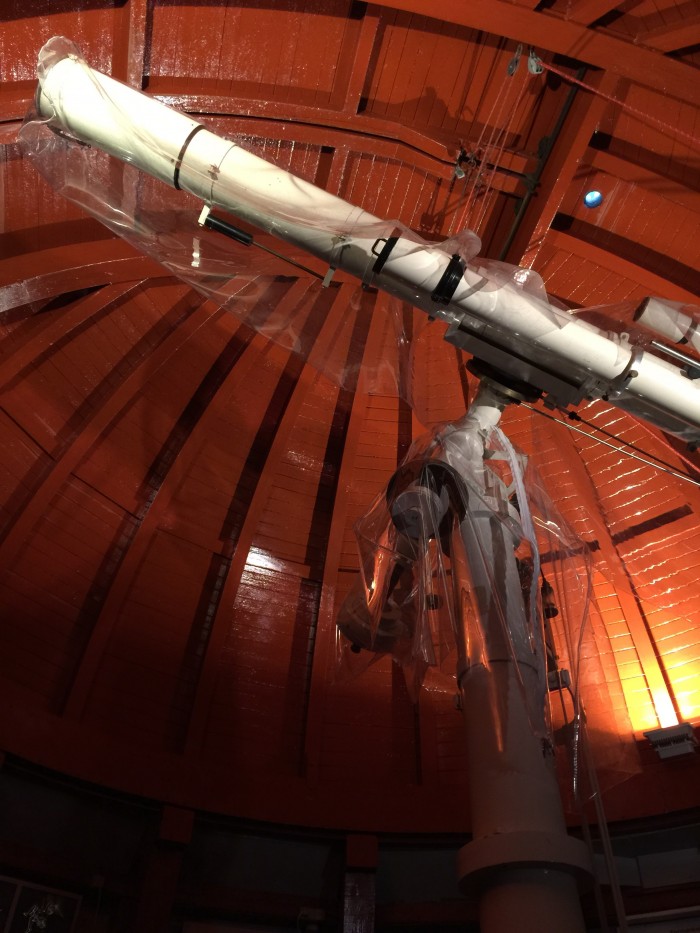 The view from the top of the tower is one of the best in Copenhagen, as it’s right in the center of the city. 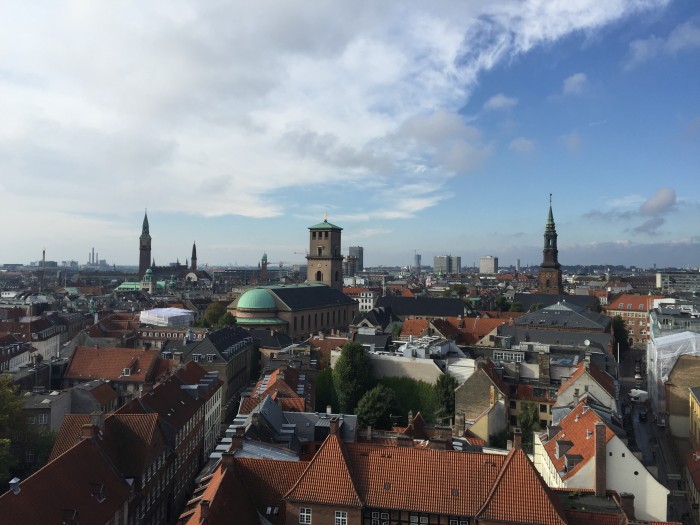 After seeing the Rundetaarn, I set off toward picturesque Nyhavn. If you’ve ever seen photographs of Copenhagen, chances are you’ve seen Nyhavn. 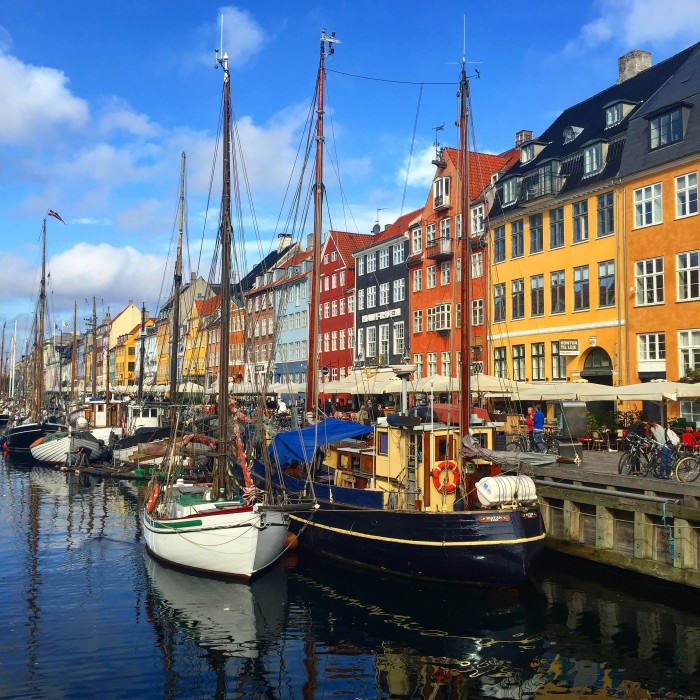 It’s just a small inlet, but with multicolored pastel buildings & rows of boats, it’s an obvious cliche backdrop. This is one of those situations where as touristy as it feels to be there, you can’t not go. Nyhavn feels like a movie set, right down to the grizzly fishermen and their dog. 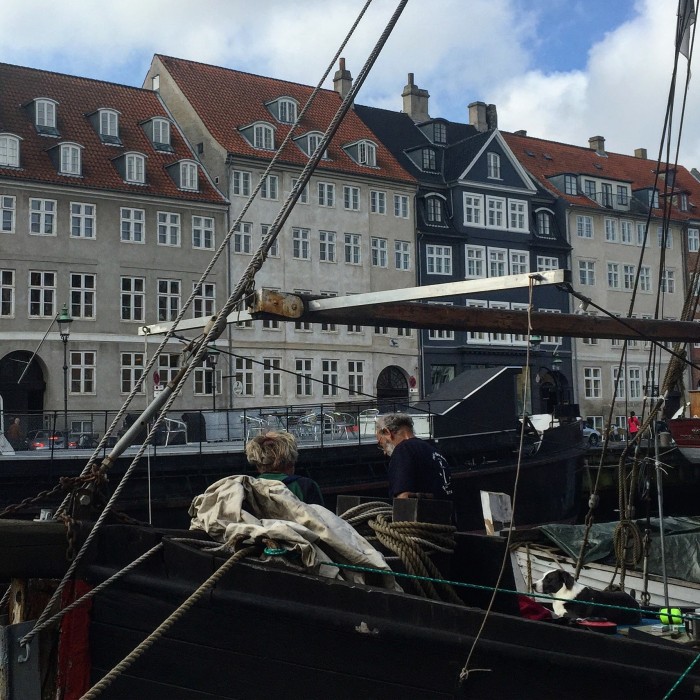 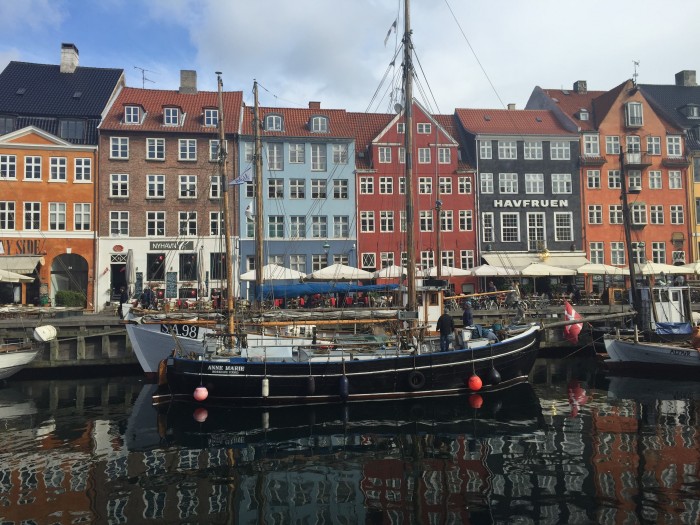 When I visited, the sky was mostly cloudy, but the sun did peek through for a few minutes to illuminate the bright buildings. 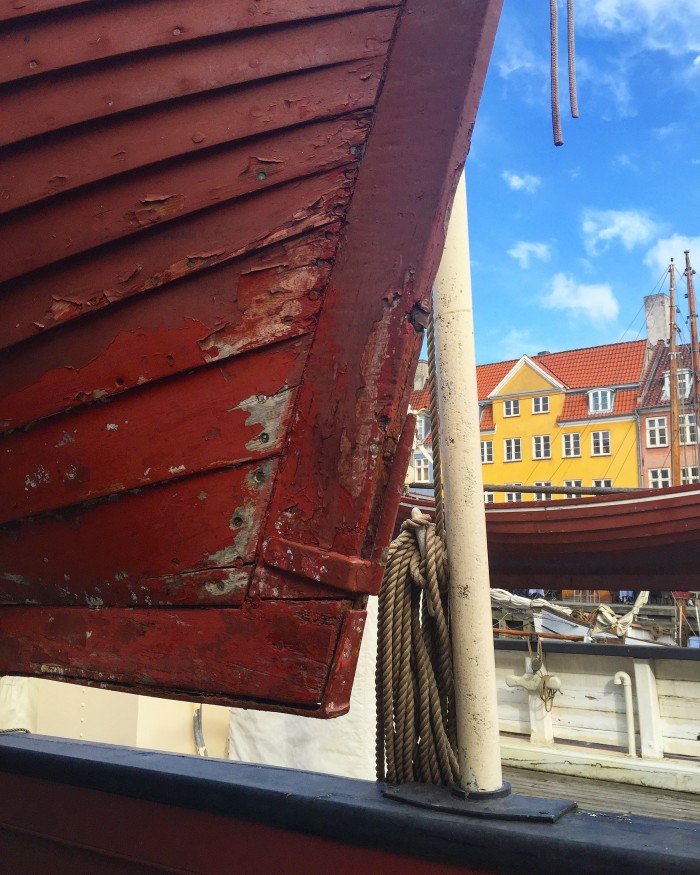 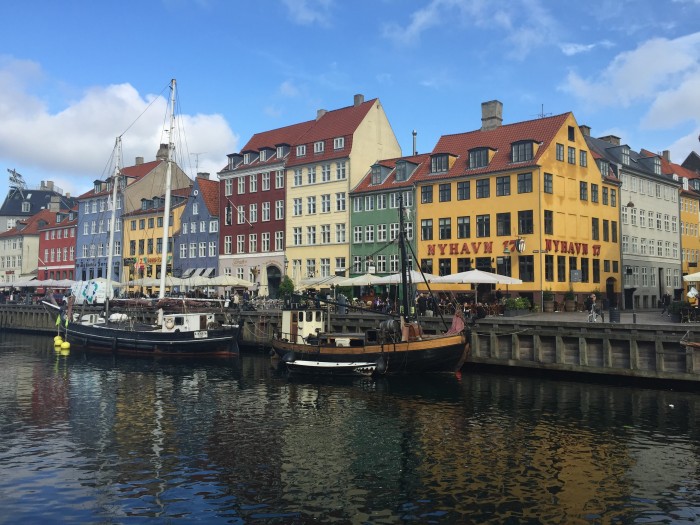 From Nyhaven, I ventured south toward Christianshavn. Copenhagen is working on building a new bridge between the areas, but it wasn’t quite finished yet when I was there, so I had to back track a bit. It was no big deal, and as a result of the walk, I found a unique feature I’ve never seen anywhere else in the world: street trampolines. I hadn’t noticed them until a guy went over, did a couple of flips to impress some girls, and then walked off. It all happened so quickly that I couldn’t take any photos or videos of him in action, but here are the trampolines. 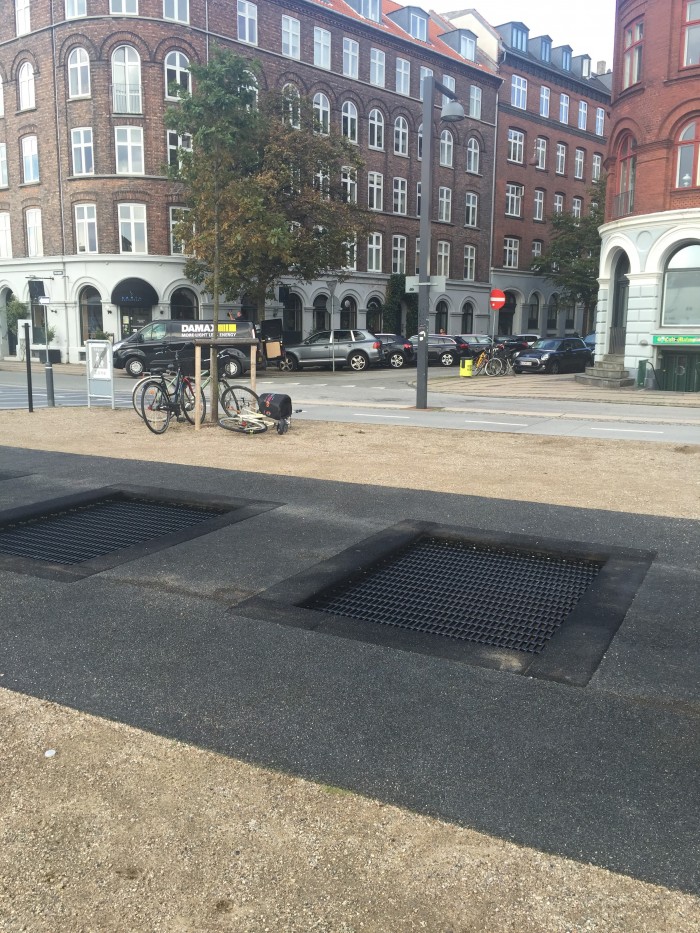 My first destination in Christianshavn was Church of Our Savior, a towering church with a golden spire at the top. The unique feature of the last part of the tower is that the staircase is on the outside of the building. The view is amazing, but as someone who hates heights, it’s an intimidating climb. Here’s the Church of Our Savior from Rundetaarn. In the background is the bridge to Sweden, plus a plane landing at nearby Copenhagen airport. 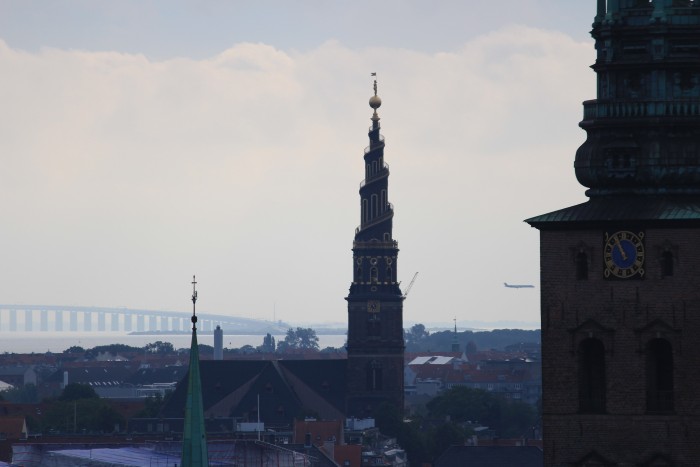 I had arrived at the Church of Our Savior at the same time as a large group of teenagers, but they were just hanging around outside, so I took my chances, paid my 40 DKK, and headed up. Had they been going in right away, I would have skipped going to the top, since teenagers inevitably mean screwing around and horseplay, which I would have had no tolerance for at those exposed heights. /end old man rant 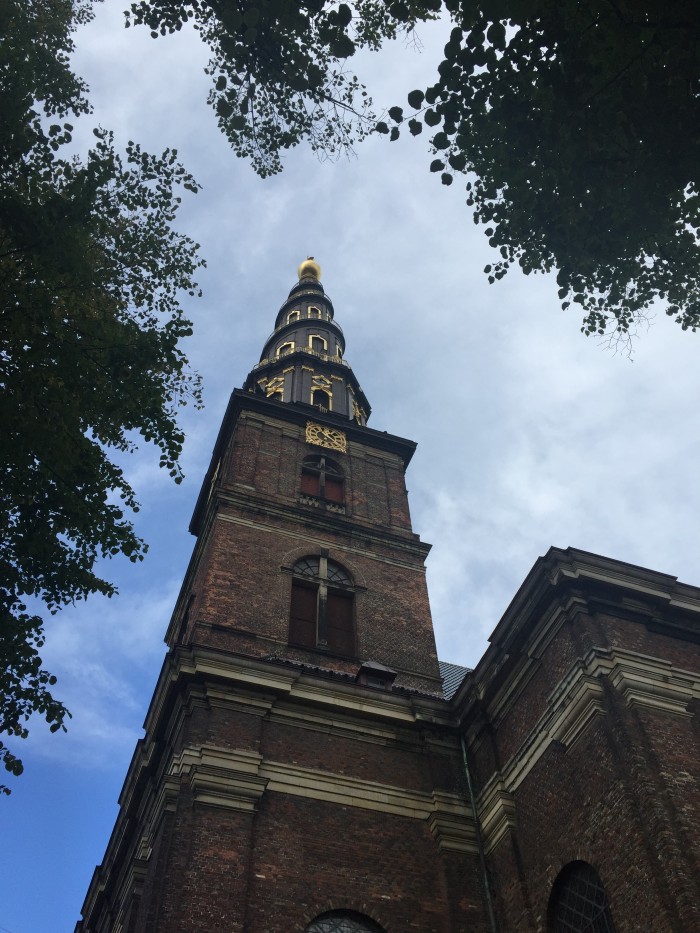 The inside part of the climb up the tower was just fine, though there were some narrow steep staircases that were almost like ladders.

The first part of the outside spiral was scary, but not too bad. It soon became clear though that there was going to be an issue. 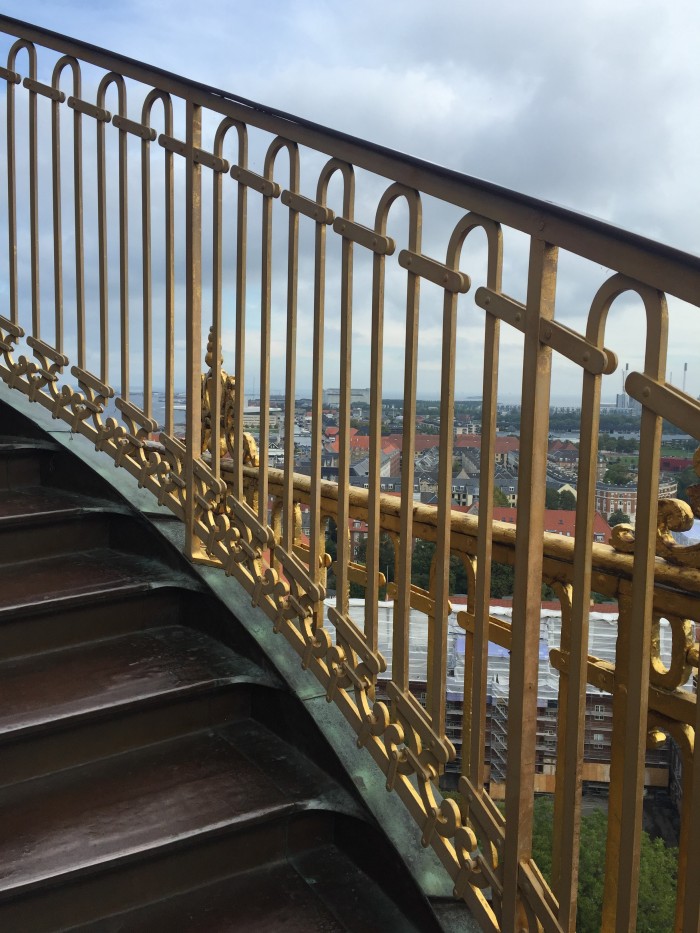 The tower of Church of Our Savior narrows as you approach the top, with the very peak only having room for a few people. As a result, you have to wait your turn if there are already people up there. This was where I found the experience to be disappointing.

Some of the kids had started the climb a few minutes behind me, so as I was waiting, they arrived there as well. Instead of waiting like everyone else, they pushed their way past everyone, and at that point I was done. I was already apprehensive about the height, and the wind was adding to my apprehension, so I wasn’t going to extend that experience any longer than I needed to just to get a few feet higher. The view from the point I got to was still nice. 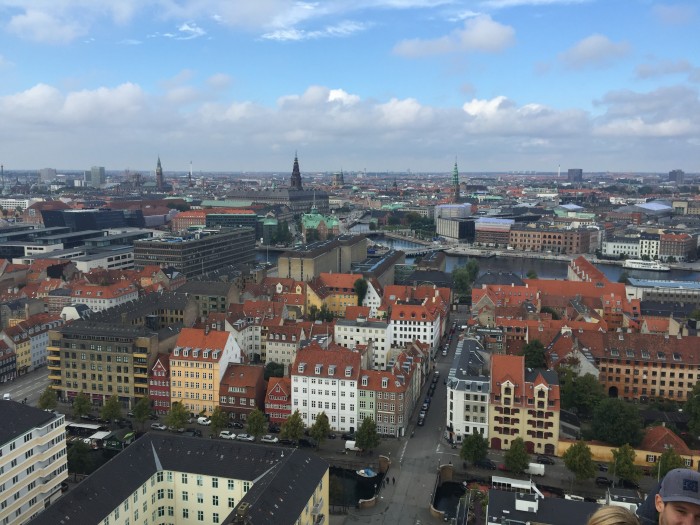 Ultimately, I was disappointed with my visit to the church. The entry is poorly managed. I can only imagine how bad it must be during the summer. Perhaps there is more control over the crowds then, I don’t know, but if you’re apprehensive about heights, I would only attempt to go to the top if you can tell that the place is empty. The view from the top is great, but there are other nice views of Copenhagen as well. Perhaps this a unique complaint, but it’s only fair that you understand this going in if you’re similar to me.

Back down on the ground, I went for a more peaceful walk to a quieter area of the city called Christiania. 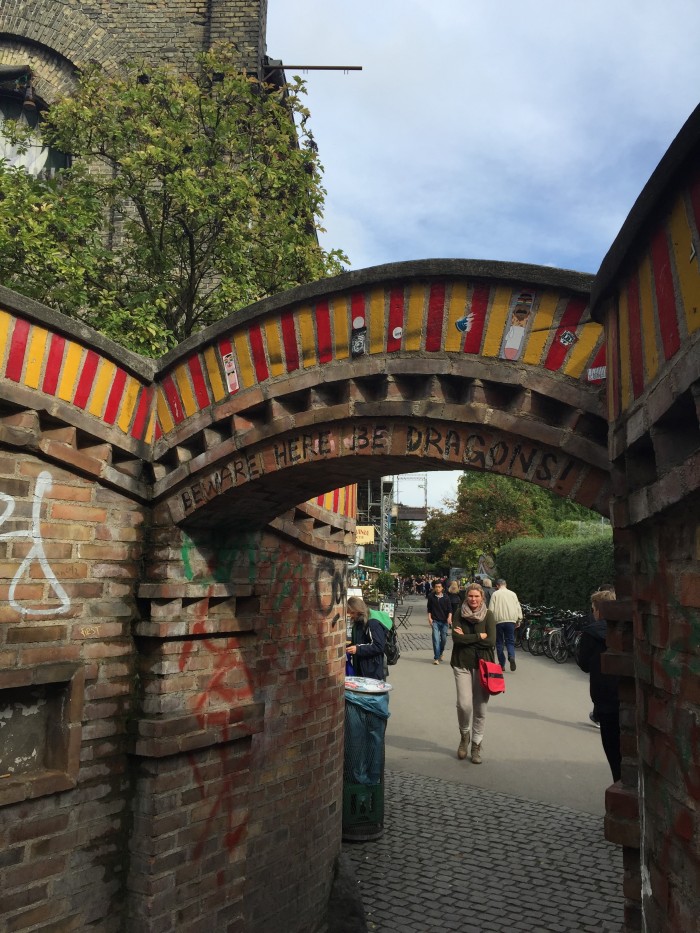 Christiania is a unique autonomous portion of Copenhagen that sits in a former military site. The site was taken over by squatters in the 1970s, who built their free community on the land. The history of Christiania is interesting & worth a read for more background. Yes, it’s known for drug trade, but that’s not what I was there for. I just wanted to see some of the shops & bars such as Cafe Nemoland, as well as see the homes people had built & have a nice walk through what is a lovely green area on the water. 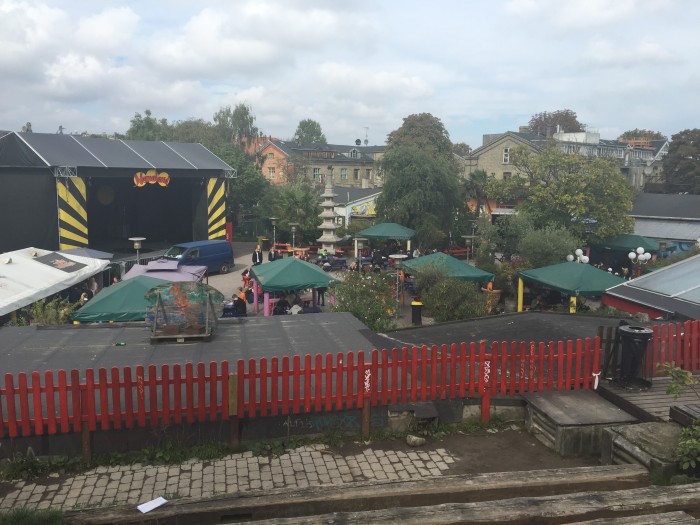 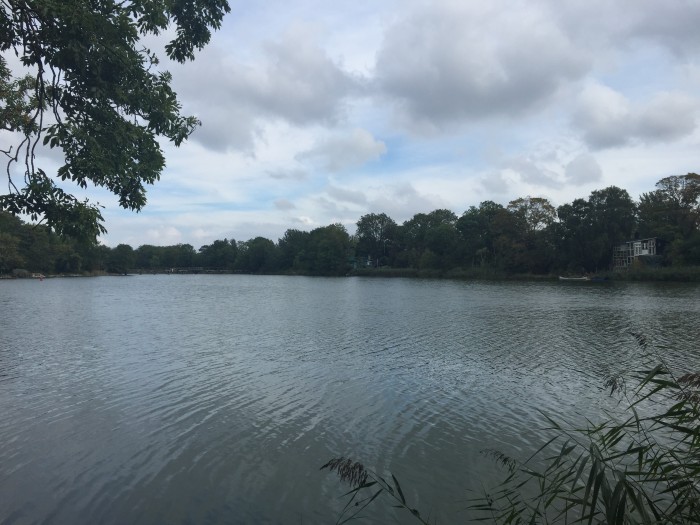 One thing I had read about Christiania is that photography is not allowed. This only seems to be true in certain areas. The “green light district” is where the drug trade is done, so understandably everyone who works there does not want or trust anyone snapping photos. The green zone is clearly marked with signs reminding you of the “no photography” rule, so it was no big deal to not take photos here. I was still able to take some photos in other areas.

Christiania is a friendly place where everyone is welcome. There’s of course a hippie vibe to it, but despite the crowds that visit, it still feels laid-back & authentic. The further you head back into Christiania, the quieter it becomes. You can see what attracted people to live in a place like this. It’s somewhat off the grid in a way, but still close to the vibrance of the city, resulting in a unique mix of greenery & artistic spirit. 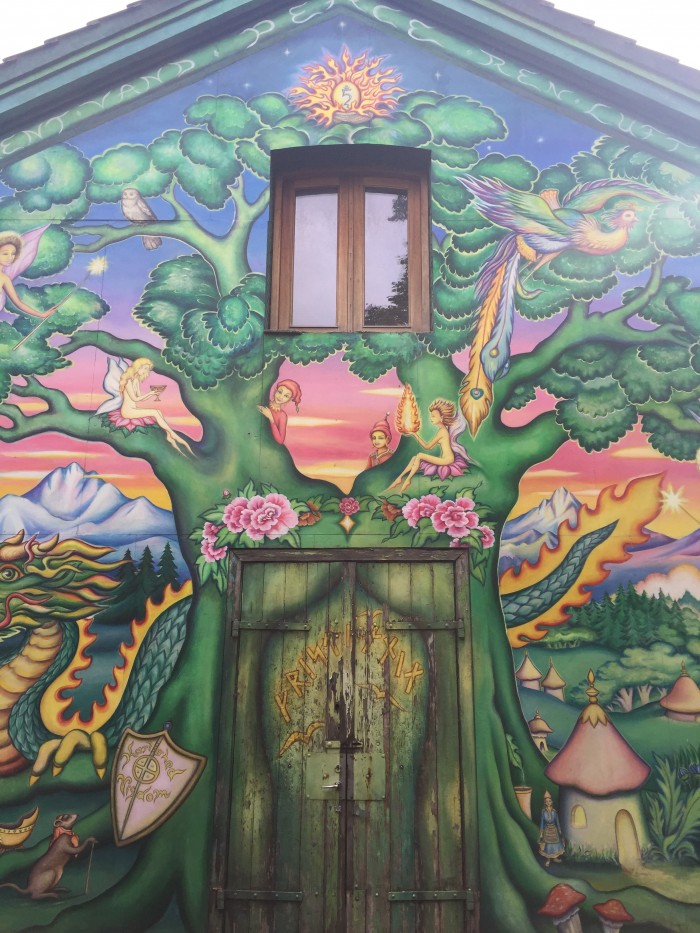 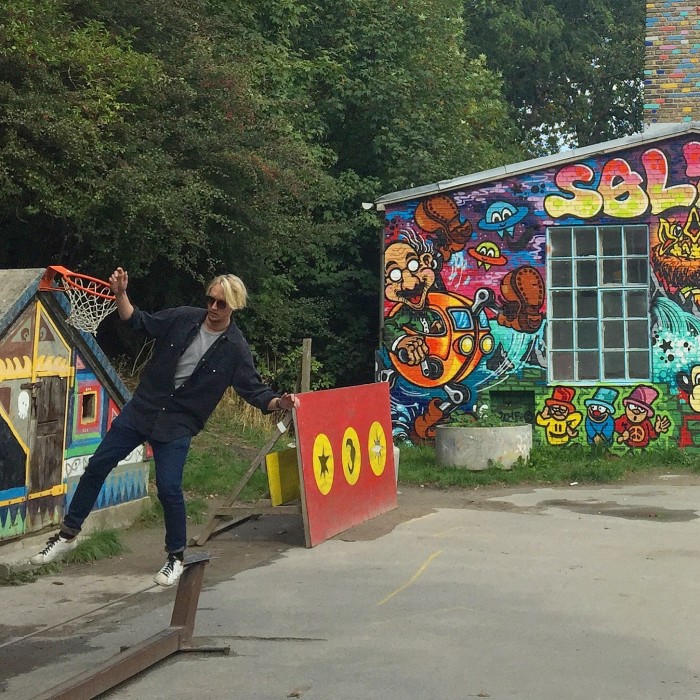 Circling back toward the north, it was time to eat. I’d done some research beforehand and learned there’s a new street food market called Copenhagen Street Food just north of Christiania and south east of Nyhavn. 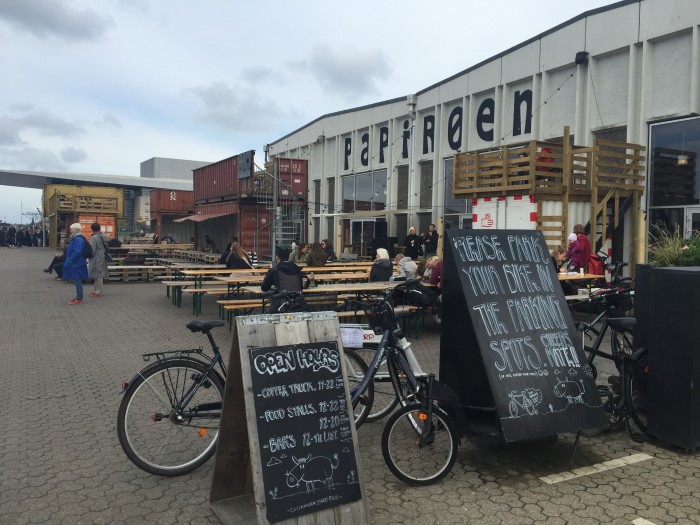 I went inside for some food and beer. For my lunch, I wanted to go local, so I went to a street food stand called Handmade that sold smørrebrød, which are Danish open-faced sandwiches. I had one with smoked salmon, and one with roast beef & crispy onions. They were delicious. 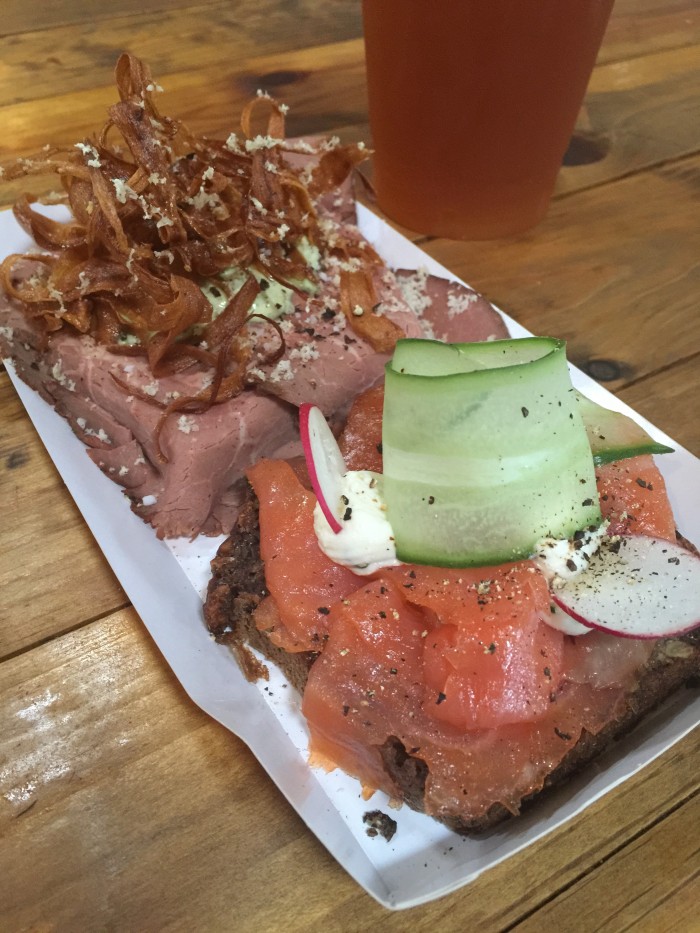 To wash it down, I had local Danish beer from bar called Stormly that has set up shop inside the complex. 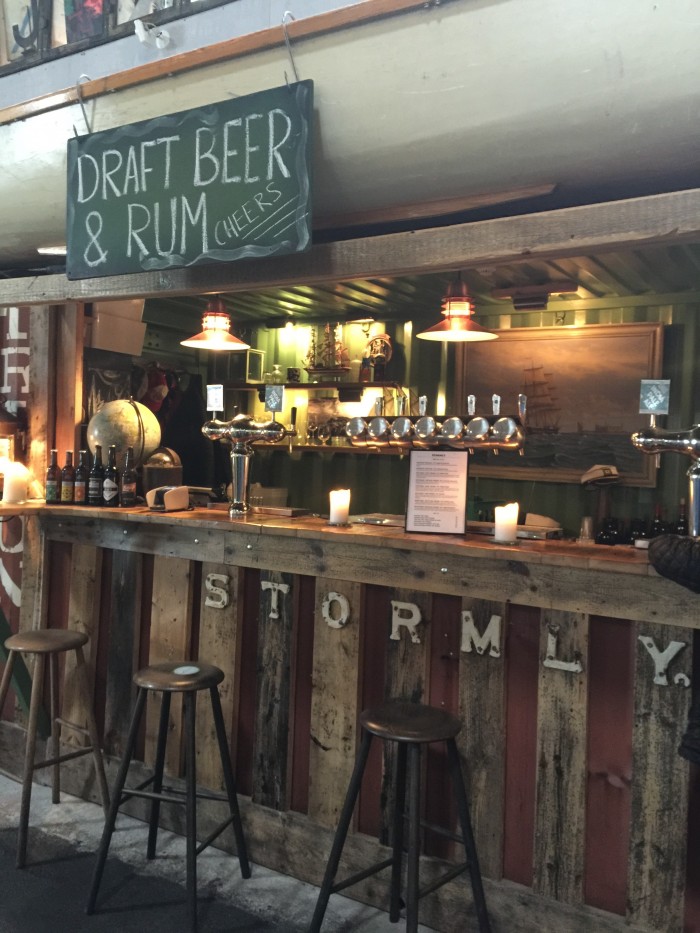 With the new bridges being built in the area, Copenhagen Street Food will be much easier to access. I expect it to become even more popular. Even at mid-afternoon on a weekday, the 35-stall market was fairly busy. Although it was cold, there were many people sitting outside drinking. There are tons of food options from all over the world, plus lots of communal seating tables, so they are more than ready for the crowds. 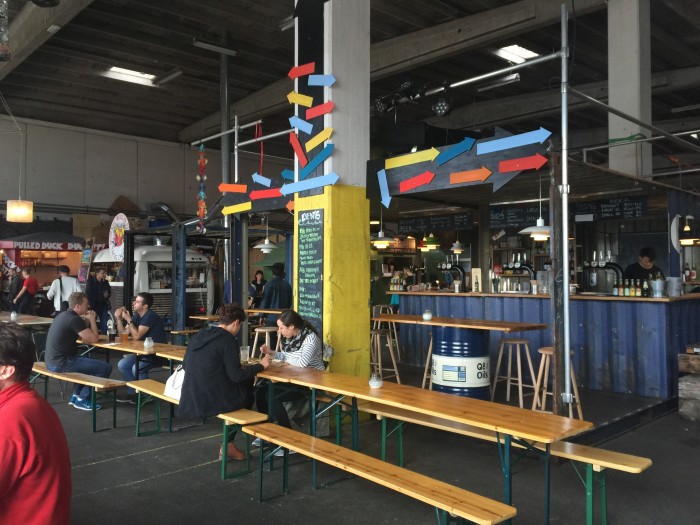 After my late lunch, it was time to wander through more of Christianshavn on my way to the Metro, which I then took back to my hotel so I could relax a bit before going out in the evening. I had plans to visit more Mikkeller bars that night. 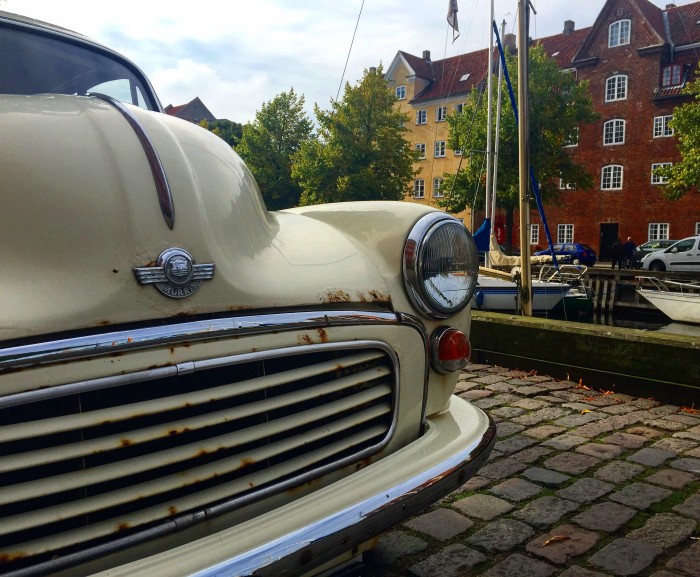