I had finally arrived in New Zealand. Long near the top of my list of “must see” countries, I was absolutely ecstatic. However, I still had one more flight to take, as I had decided to start my journey through New Zealand on the South Island in Queenstown, then work my way back north to Auckland for my departing flight two weeks later.

I had a couple of hours in Auckland after my Malaysia Airlines flight arrived, so I walked to the domestic terminal. There are buses in between the international and domestic terminals at AKL, but it was nice out, and I’d just spent 10 hours on a plane, so I enjoyed the walk. 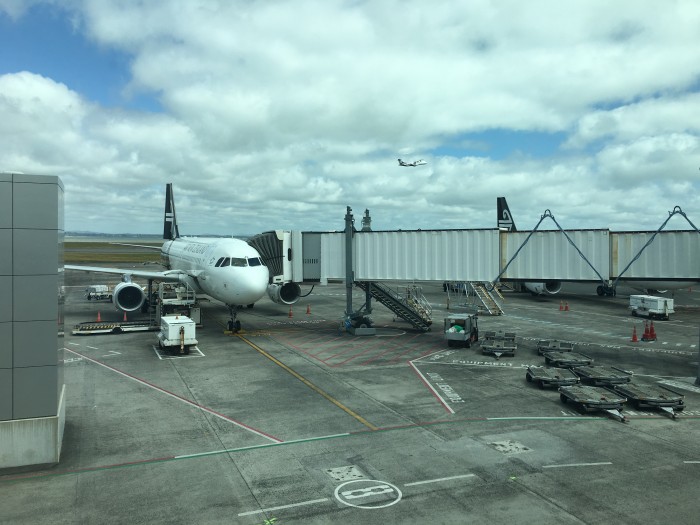 The domestic terminal was small & crowded. I decided to have a snack, so I had a steak & cheese pie. I love savory pies, so it was nice to see that they are ever-present in New Zealand. I would have many of them during my time there. 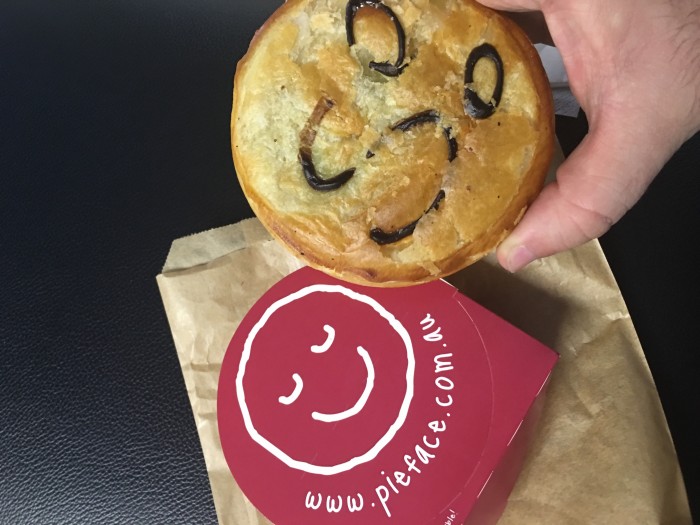 Finally, it was time for my flight to Queenstown. I was in economy class on an Airbus A320 with Air New Zealand. Since I’d just been on another long flight, I sprung for a seat assignment and ended up getting in an exit row for $10 or so. The exit row wasn’t particularly wide, but I wasn’t expecting luxury. My seat was originally the aisle seat, but nobody else was in the row, so I shifted over to the window in order to admire New Zealand’s gorgeous scenery from above. 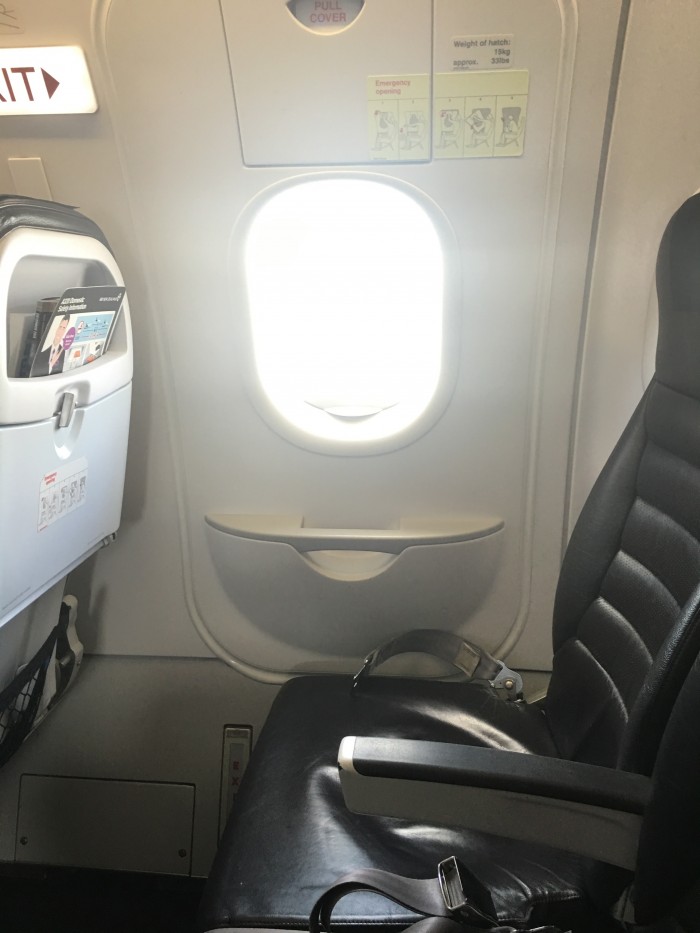 Air New Zealand is known for their cool inflight safety videos, so the nerd in me was excited to get to watch one while on a flight. It was this surfing video I had posted about a few months prior.

Most of the flight was uneventful. The mountains we flew over once we reached the land of the South Island were indeed beautiful. 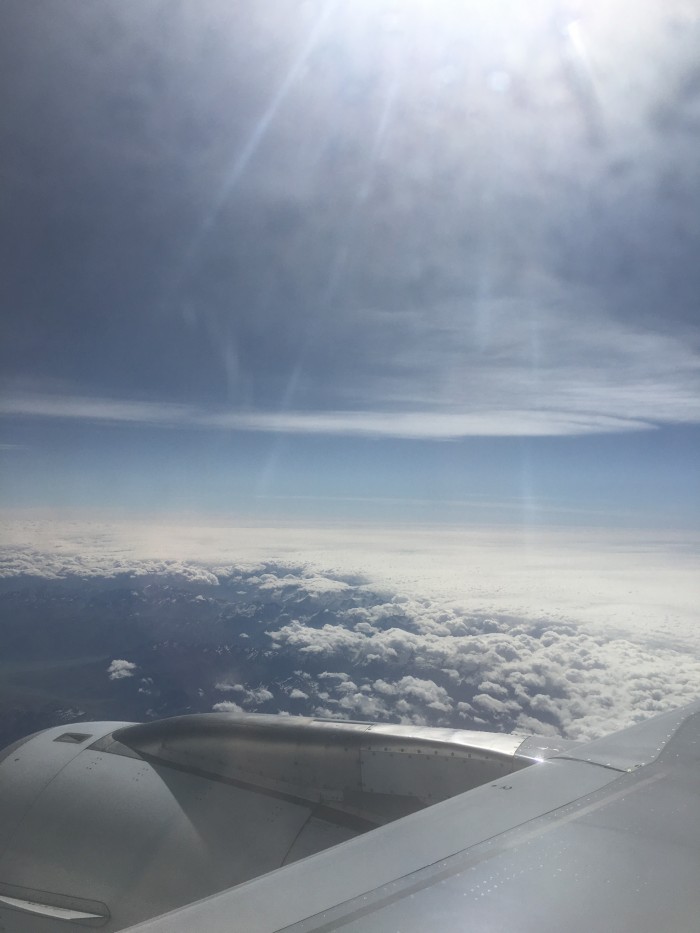 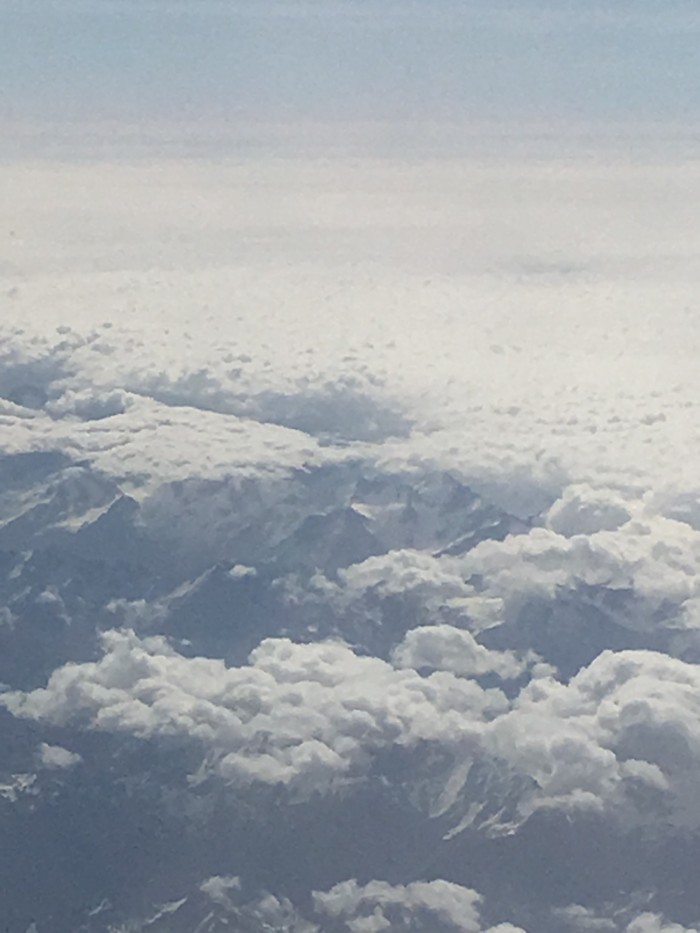 We were given a small snack of a cookie, plus a hard candy closer to landing. That’s a nice little touch since it helps open your ears. 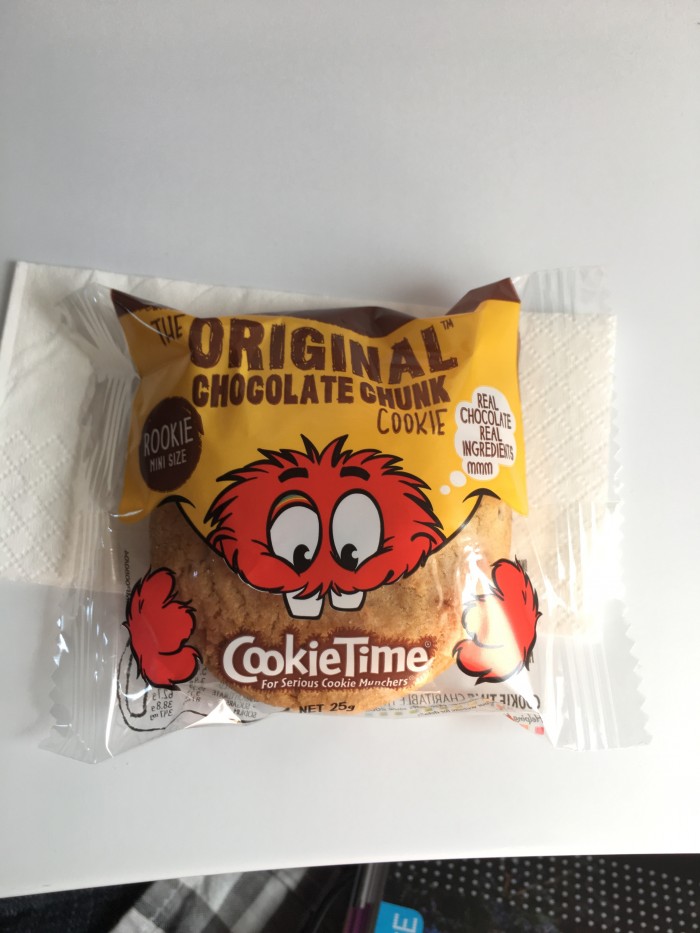 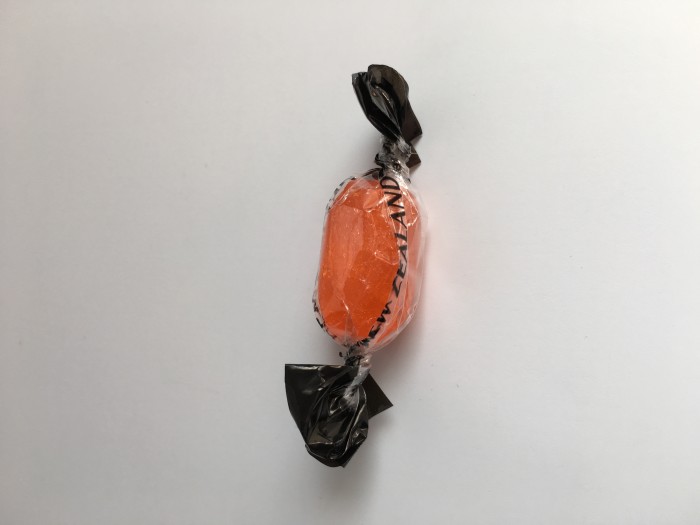 While 90% of the flight was uneventful, things took a dramatic turn as we began our descent into Queenstown. I’d been paying some attention to where we were, and based on the GPS on my phone, I knew we were starting to get close. I spotted what looked like a small airport off to our right, and wondered if that could be Queenstown. 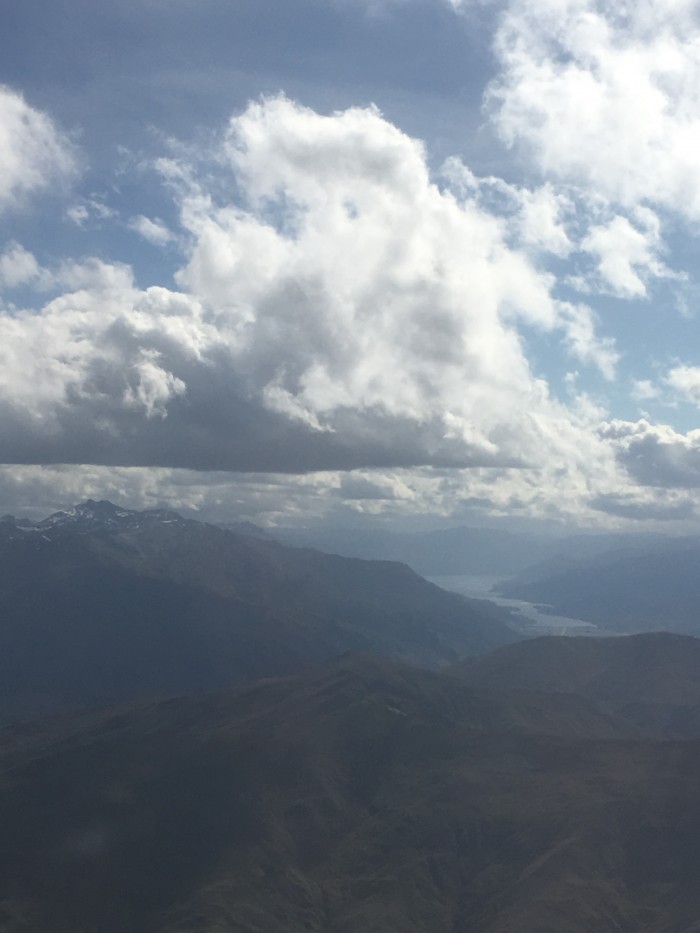 Suddenly, the aircraft banked to the right, and we started to descend sharply. Hearing the engine noise get quieter as the plane begins to drop like that is an interesting experience. A woman behind me started shrieking. I was admittedly a bit scared myself, but two things kept me sane. First, I was glad I’d been at the window so I could see that we were indeed approaching the airport, then, I noticed the strong New Zealander guys across the aisle weren’t reacting at all. I figured they’d done the trip many times before, so they were used to this approach to the Queenstown airport.

During the flight, I had been listening to the wonderful debut album from Julien Baker, “Sprained Ankle”, which had topped my list of top albums of 2015. Somehow, it all fit together with the scenery and the flight. I would end up listening to it a lot throughout my trip to New Zealand. Here’s one of my favorite songs from the album, “Something”.

The descent was thrilling, from the standpoint of the feeling of falling out of the sky, coupled with the scenic mountains we were now getting closer to. For the last miles of the flight, we were actually in a valley, passing lower than the summits of the mountains on both sides. 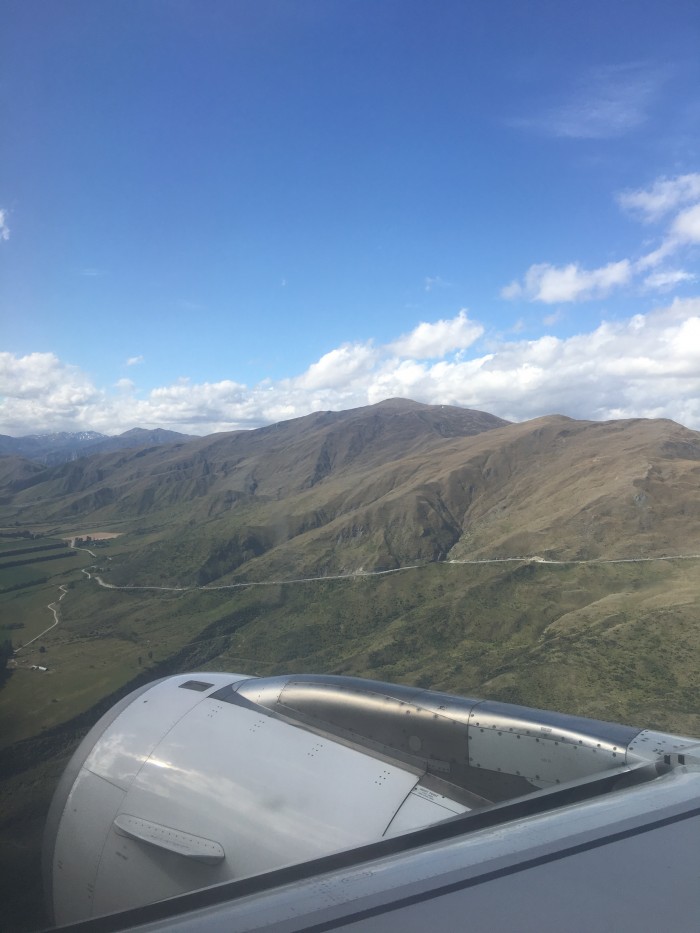 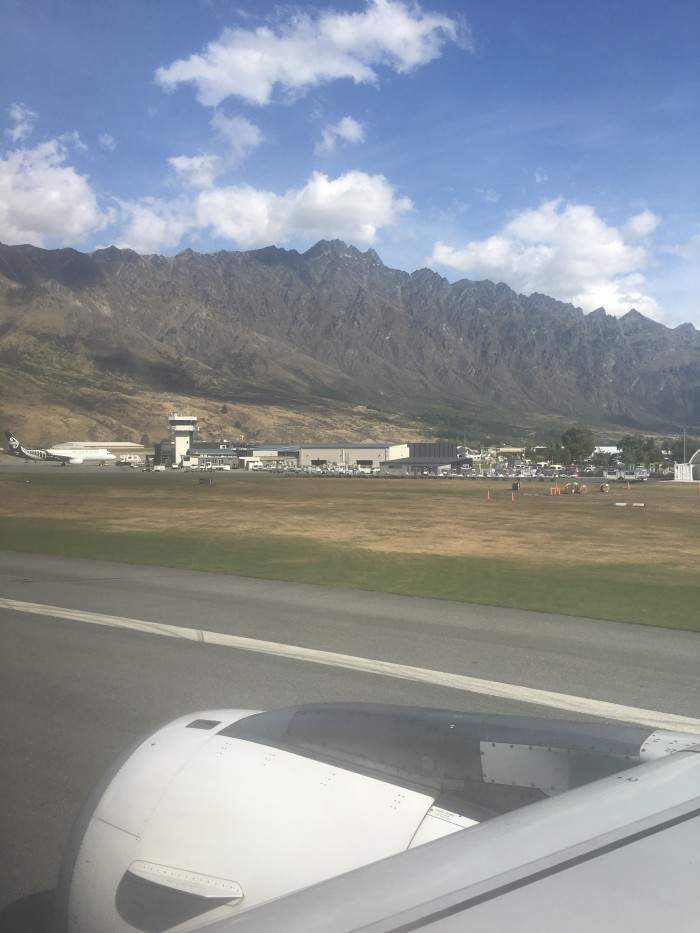 There was a bit of turbulence, but nothing that the Air New Zealand pilots couldn’t handle. It’s certainly one of the scarier flight experiences I’ve had, but it’s nothing out of the ordinary. Still, I was glad that I was going to be on the ground for the next couple of weeks. I had arrived in Queenstown, New Zealand, one of the most beautiful places on Earth. 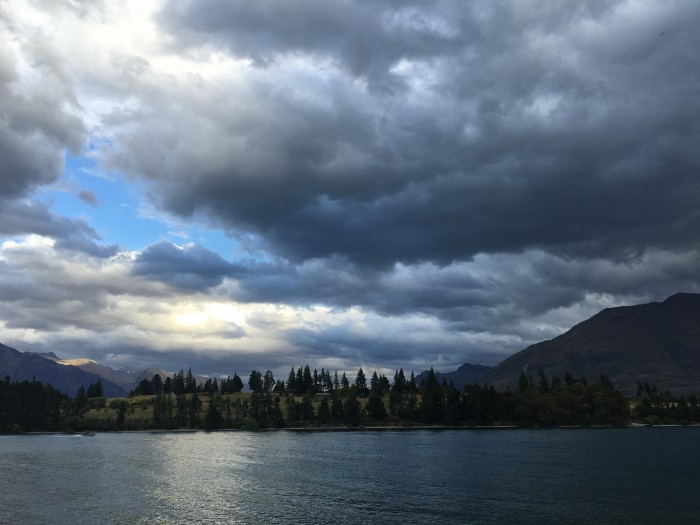