Pilsen, Czech Republic is best known as the birthplace of the pilsner style of beer. The Pilsner Urquell brewery is the obvious main draw for beer drinkers in the city, with the smell of freshly brewing beer permeating the air. However, if you’ve come to Pilsen for beer, you’d be missing out on a lot if you didn’t also check out the local craft beer bars. The city center of Pilsen has several bars & breweries that are all located in close proximity to each other. Here are my favorite places to drink craft beer in Pilsen.

The best craft beer in Pilsen

Pivotečka located just northeast of Náměstí Republiky, Pilsen’s town square. It was the liveliest of the craft beer bars we visited in Pilsen. It also had the largest beer selection. 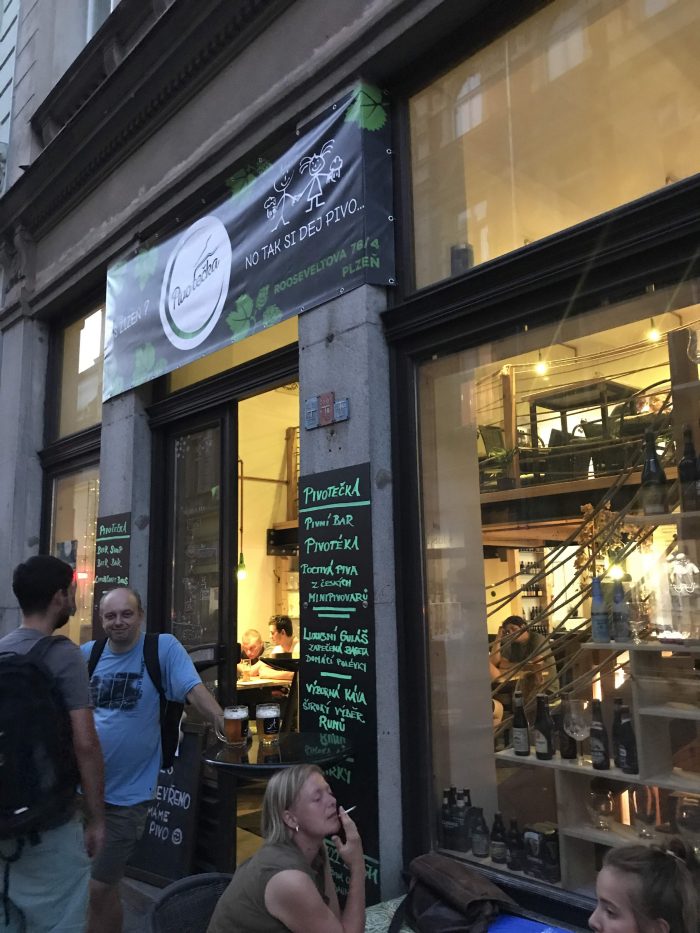 The bar has 11 taps of Czech craft beer, one of which is a house beer. The remainder all frequently rotate, plus there is a selection of around 100 local & European bottles to choose from. The bartender was happy to help us find the right beer. 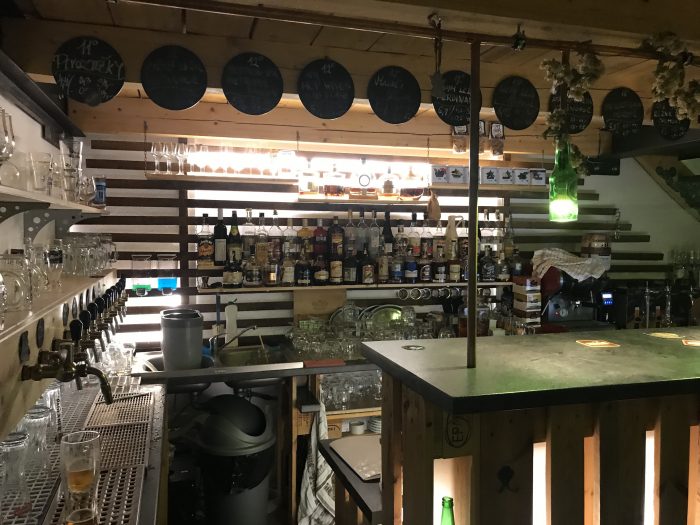 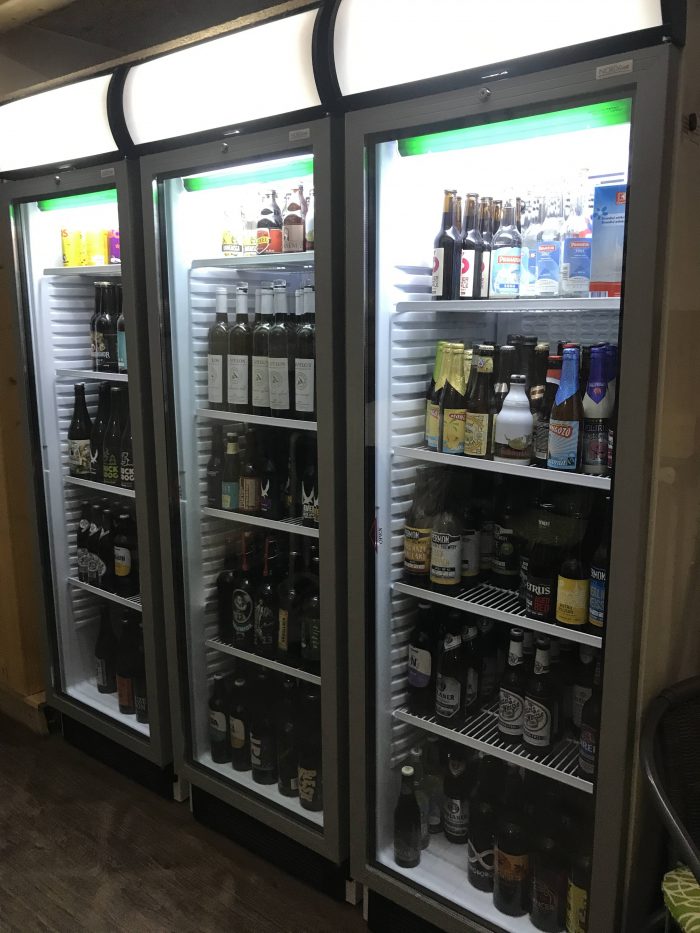 Head inside past the crowded outside tables on a warm summer evening, and you’ll find quieter dining tables both in the back & upstairs.

Francis Beer Cafe can be found on the north side of Náměstí Republiky. It’s easy to miss, however, as it’s actually down an alleyway off the square. 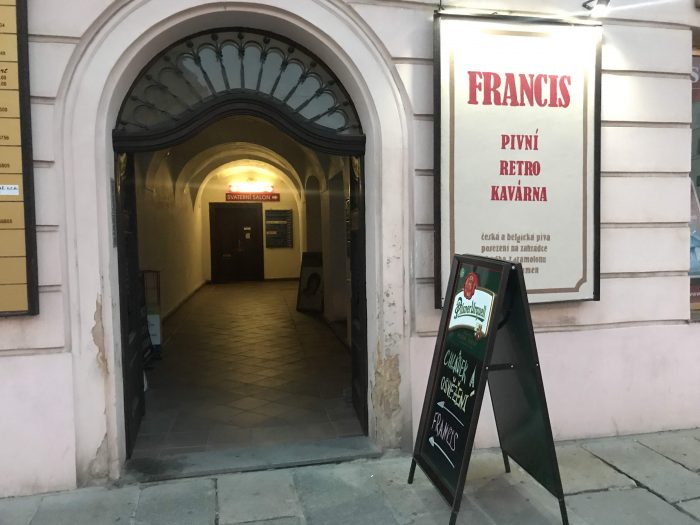 Once you’ve spotted the alley, follow it as it winds back toward a smaller courtyard. Depending on the time of day & season, you’ll find tables outside the bar. 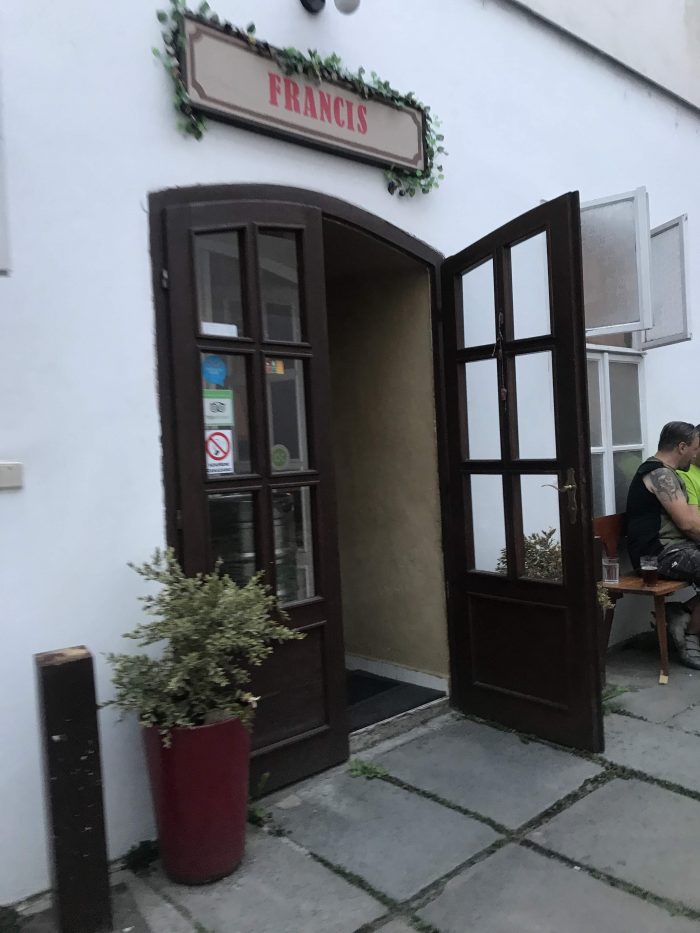 Francis isn’t the biggest bar (it only has 4 taps, plus a small bottle selection), but what it lacks in size, it makes up in intimacy. The bar was originally a Belgian bar, but now it features local Czech craft beers. 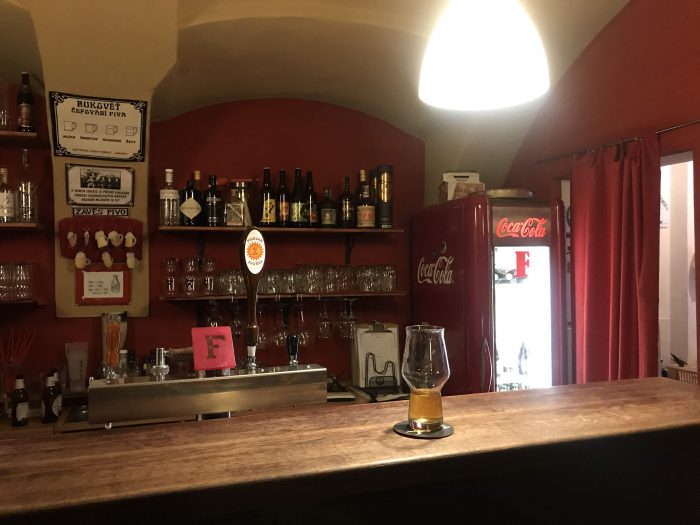 Francis has been open for 6 years, but when we visited, a new owner had taken over a few months prior. We chatted with him for a while & eventually found out that he’s also a movie stuntman, & he would be heading to Prague for work early in the morning. 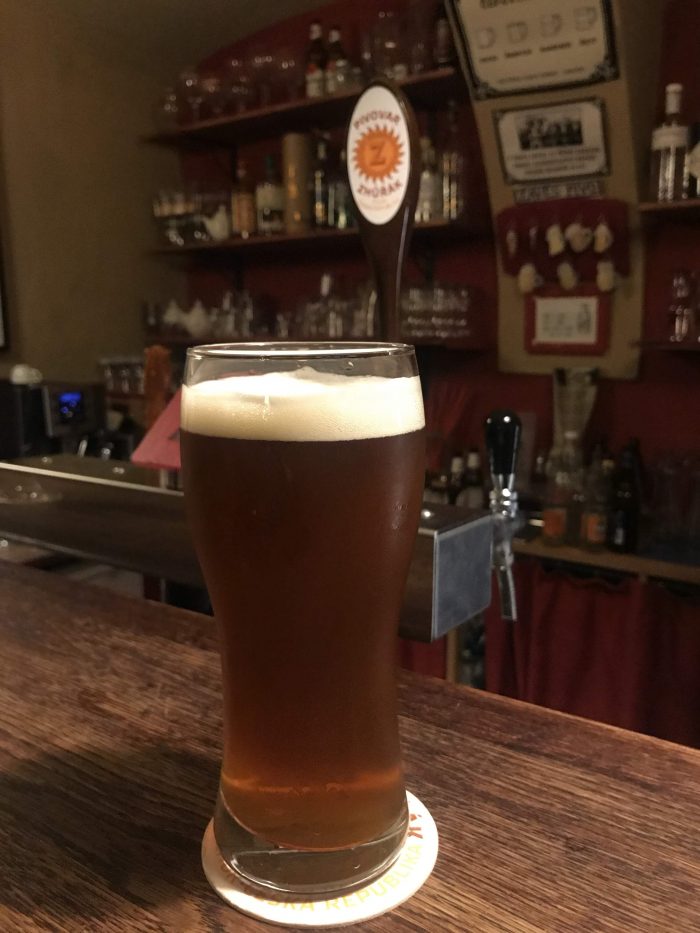 Just like your parents advised: always wander down strange alleyways! You never know what interesting bars you might find.

Pivstro can be found in the southwestern part of the Pilsen city center. 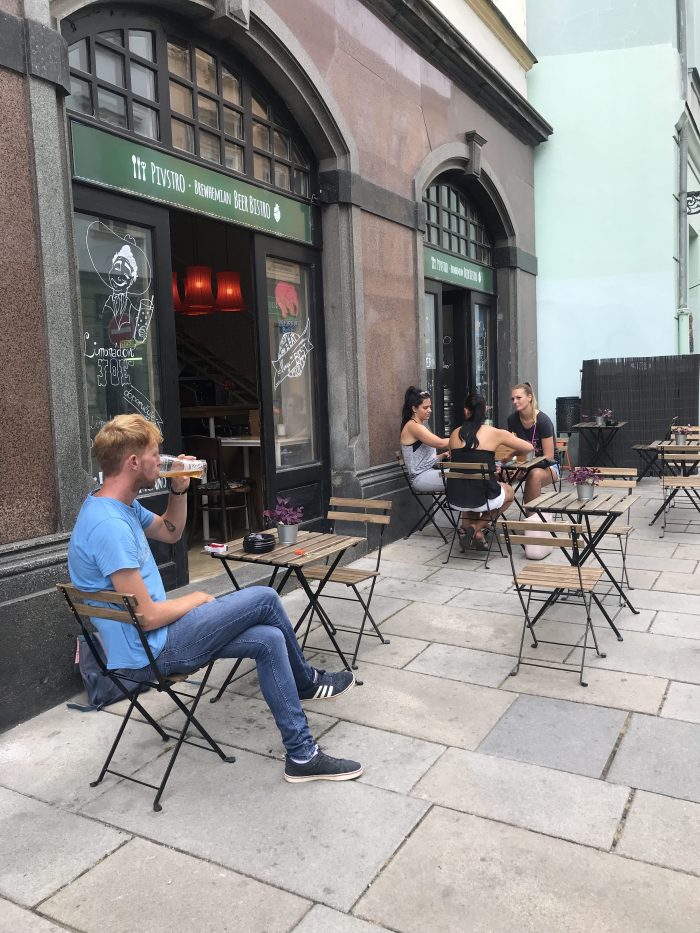 The bar has 10 taps of Czech beer, along with a bottle selection. Pivstro also has a full menu of pub food. 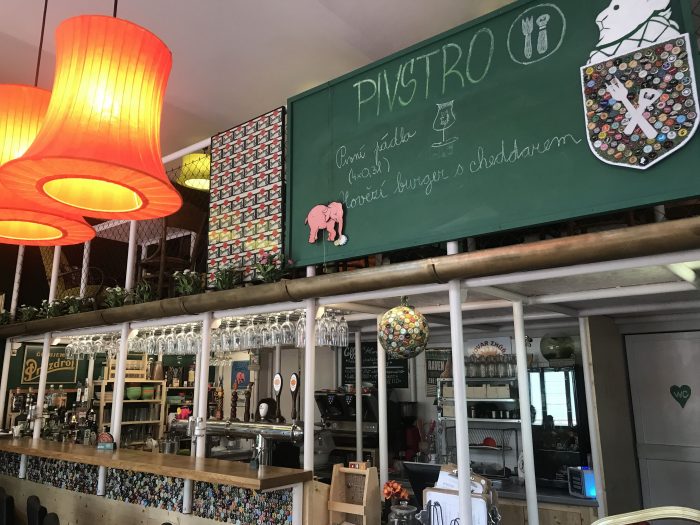 There is a nice outside patio, which is a plus during the summer. 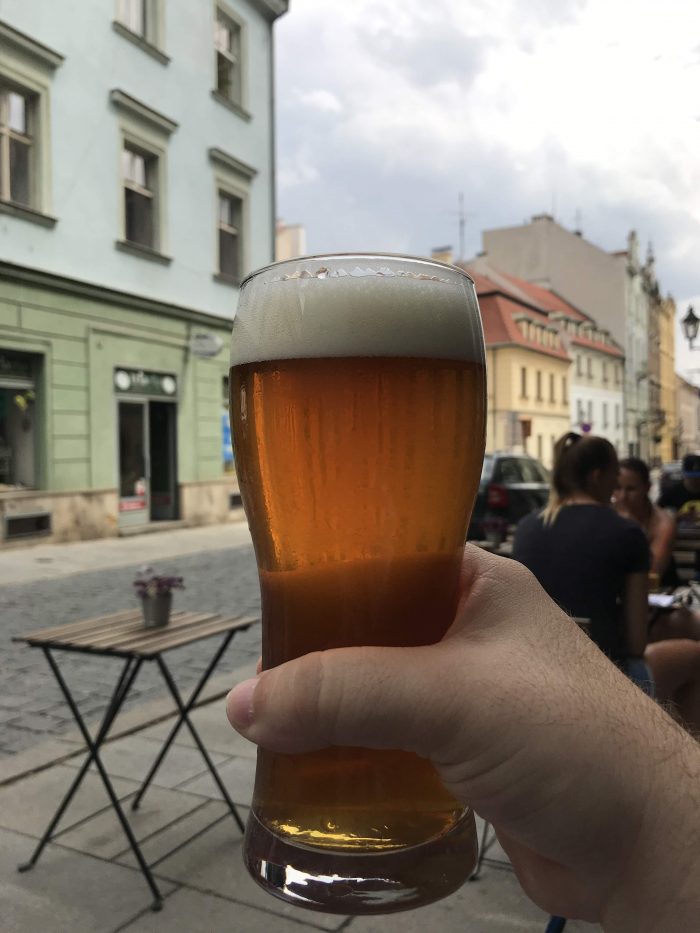 Beer Factory is the only craft brewery in Pilsen’s city center, though there are a few other breweries just outside it. 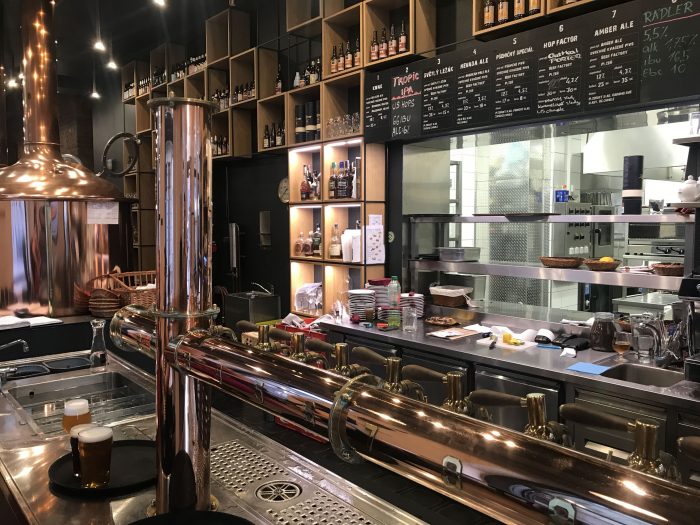 The brewery has 12 taps, a couple of which are devoted to non-beer beverages. When we visited, 7 of the taps were their own beer, along with a couple of guests. Bottles were also available. 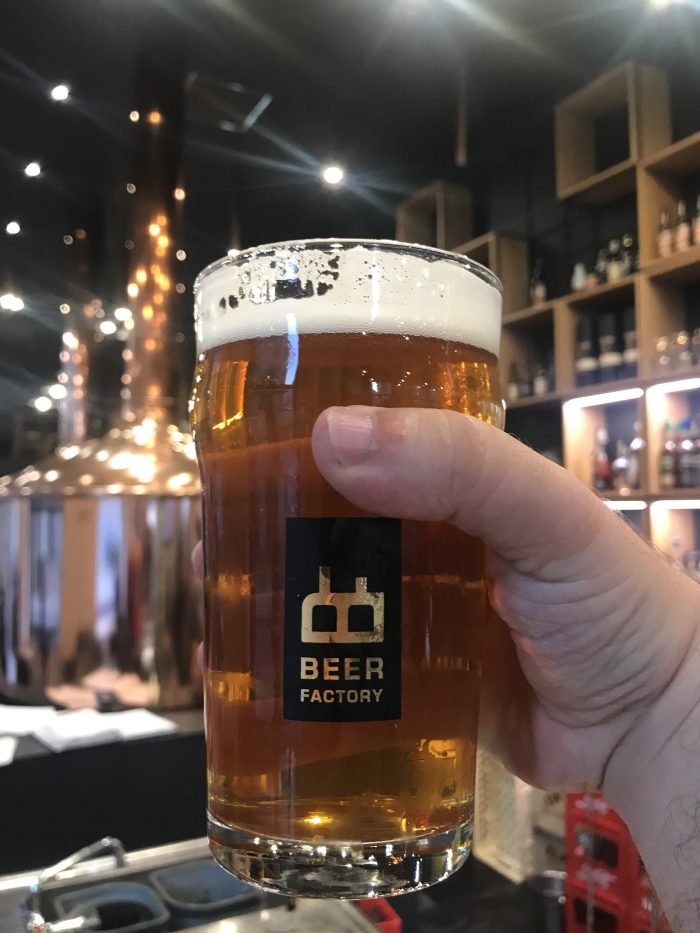 The brewery also features a meat-heavy menu with dishes such as roasted pork knuckle, leg of fallow deer, and beef goulash in black beer sauce. They too have a large outside patio to drink on.

In addition to these bars & breweries, there are a few other craft beer spots located around the Pilsen area. On the north side of the city, you’ll find Raven Pub Plzeň & Pivovar Raven. You can also find their beers at some of the other bars on this list. Purkmistr is located south of Pilsen, and in addition to being a brewery, also has a beer spa on site. Beer spas are certainly an interesting experience. I was able to visit one at the Svachkova resort in South Bohemia. Pivovar Zhůřák, which opened in 2013, is located even further south of Pilsen, about 25 kilometers away. Their beers can also be found in the craft beer bars in Pilsen’s city center.

The Czech Republic runs on beer, and nowhere is this more the case than in Pilsen. While Pilsner Urquell brings visitors to town, the craft beer bars & breweries that are popping up will ensure that the city’s ongoing beer future is bright. 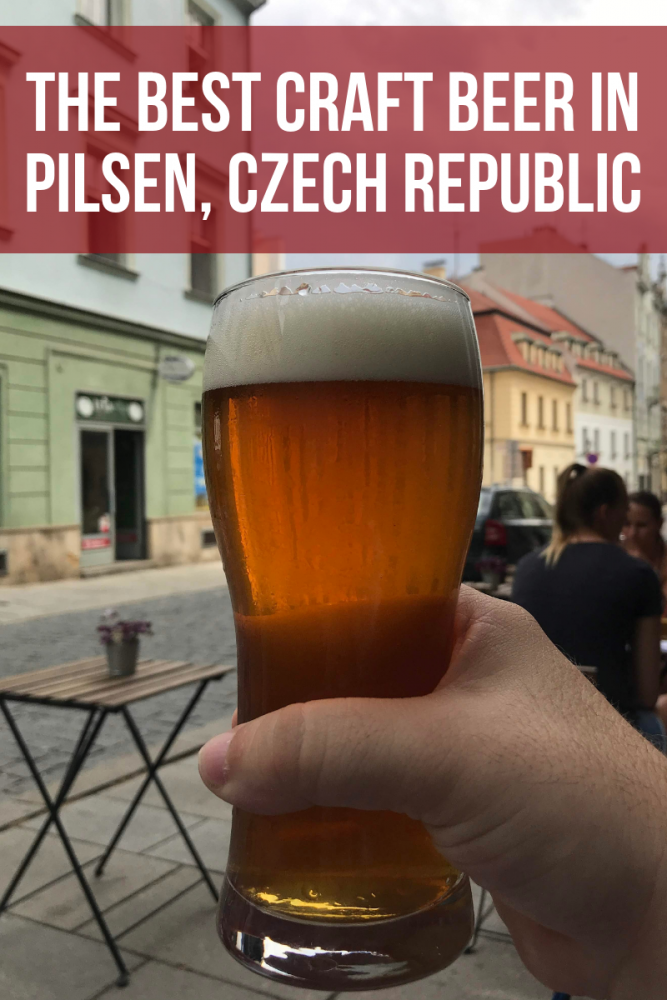