In April, I traveled from San Francisco to Istanbul. I flew on Turkish Airlines in business class on a Boeing 777-300ER. It was nice to be able to fly directly to Istanbul from SFO, and the ticket was just 63,500 Avianca LifeMiles each way, some of which I had earned with their credit card, and others from Citi ThankYou points that I transferred to Avianca to then use on Turkish Airlines, which is also in the Star Alliance. That’s not bad at all for about 13 hours in business class from SFO to IST.

After an easy check-in at the Turkish Airlines desk, I headed to the United Polaris lounge, which is also the business class lounge for Turkish Airlines at SFO. I had a couple of travel-themed cocktails with a nice meal in the dining room. It’s quite a nice lounge. 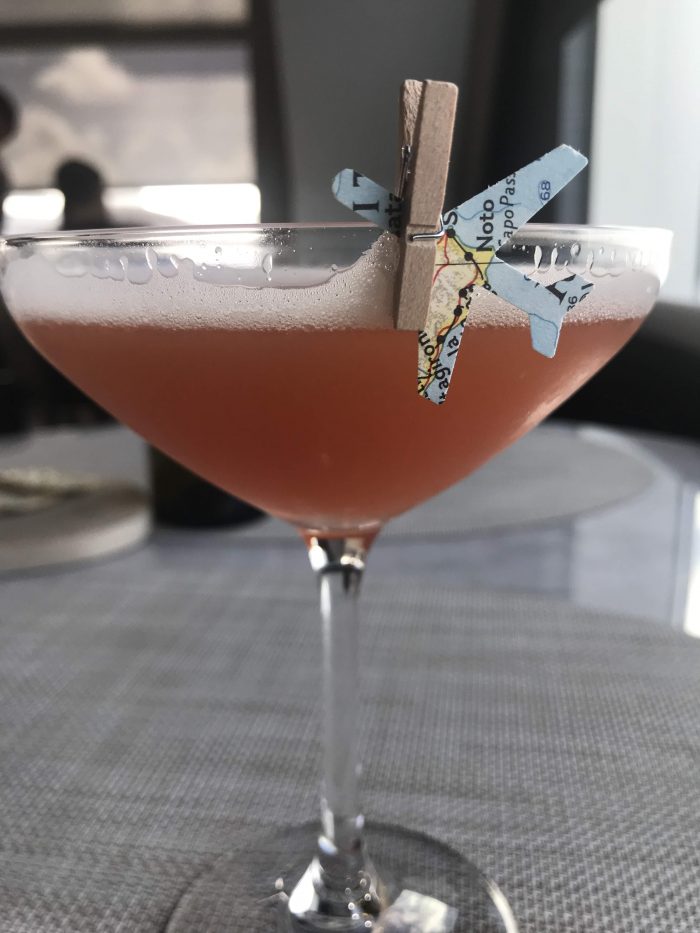 I was also sure to leave plenty of time to check out the new outdoor observation deck at the International G Terminal. It’s a nice space, with plenty of panoramic views for planespotting. 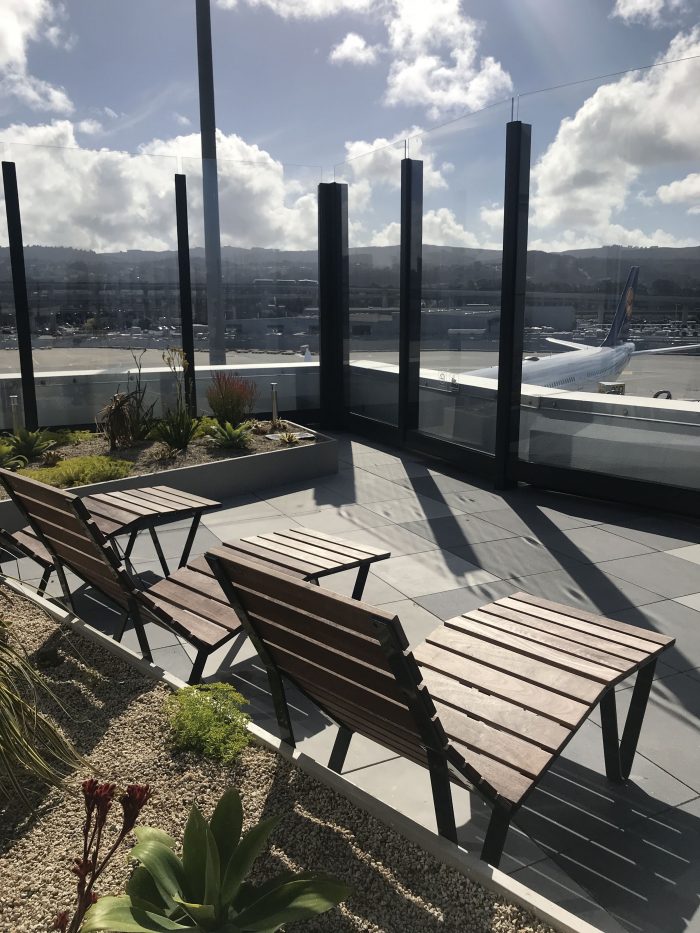 I could also see the Turkish Airlines Boeing 777-300ER I would be flying on. 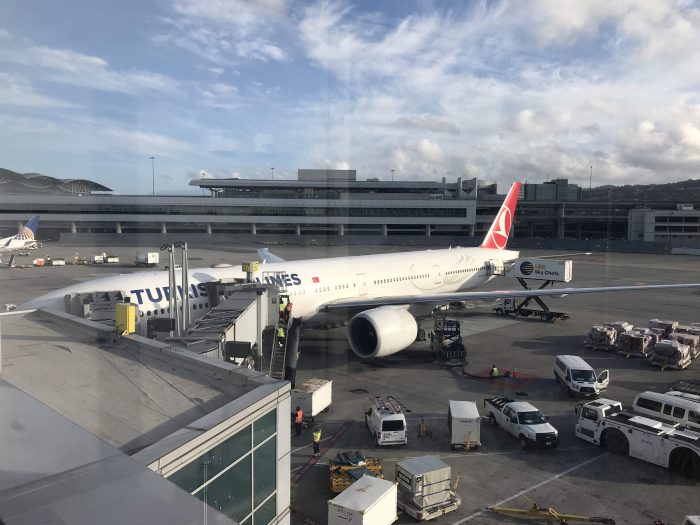 Finally, it was time for the flight. Boarding was straightforward, & started roughly on time. Turkish Airlines’ business class seating on the Boeing 777-300ER is arranged in a 2-3-2 layout. This isn’t ideal, but the soft product is the appealing part of flying on Turkish Airlines. Their business class seats aren’t as comfortable or as private as some of those on other airlines, but they’re still lie flat, and still a comfortable enough to spend the long journey between San Francisco & Istanbul. The cabin was mostly full. 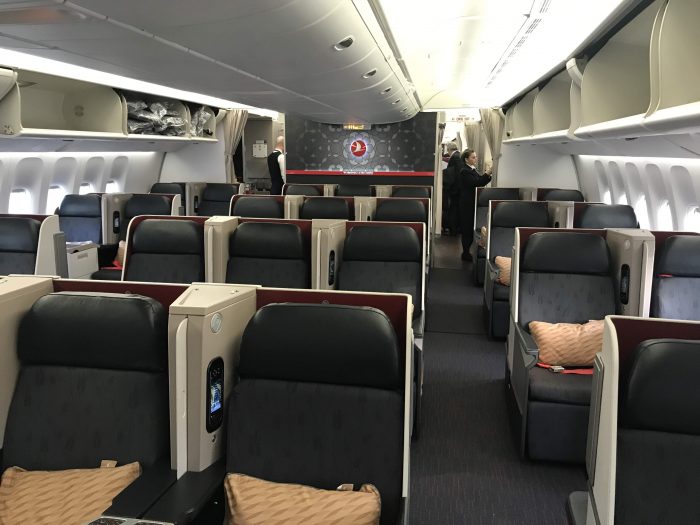 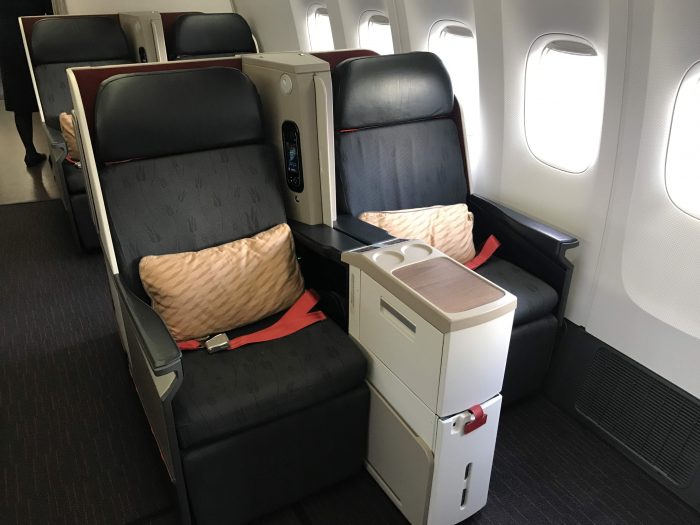 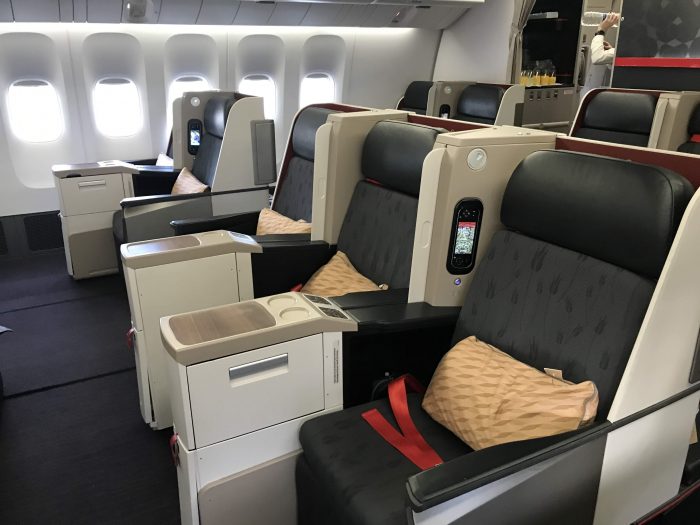 I had seat 3A, so at least I was not stuck in the middle section or with anyone potentially climbing over me. There is a bit of a divider that slides out to give some privacy between the seats, and I had no problems stepping over the guy next to me when I needed to get up. The seats do seem a bit dated, but they are otherwise fine. 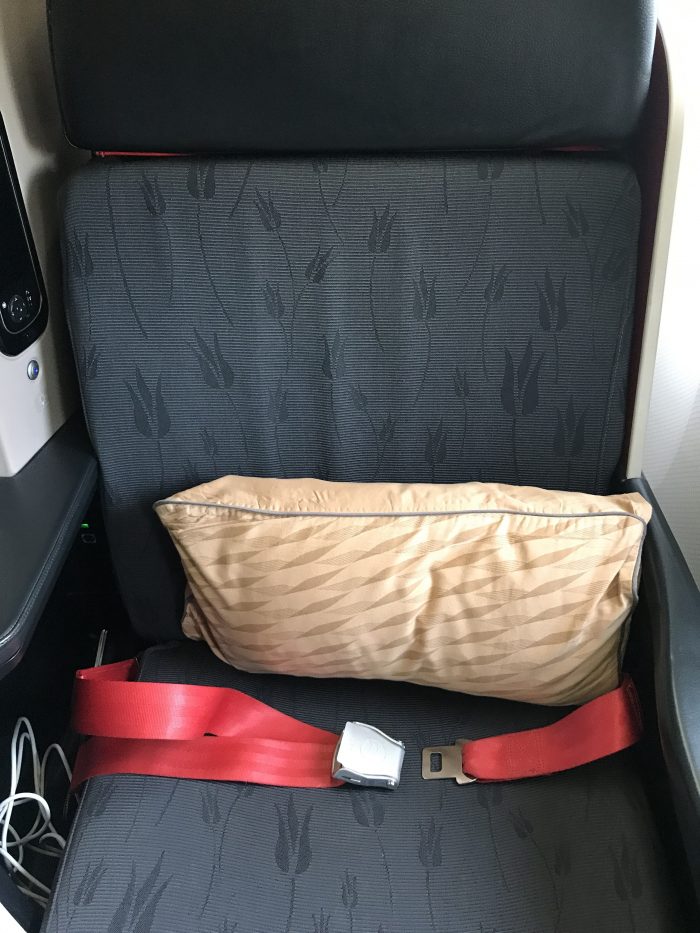 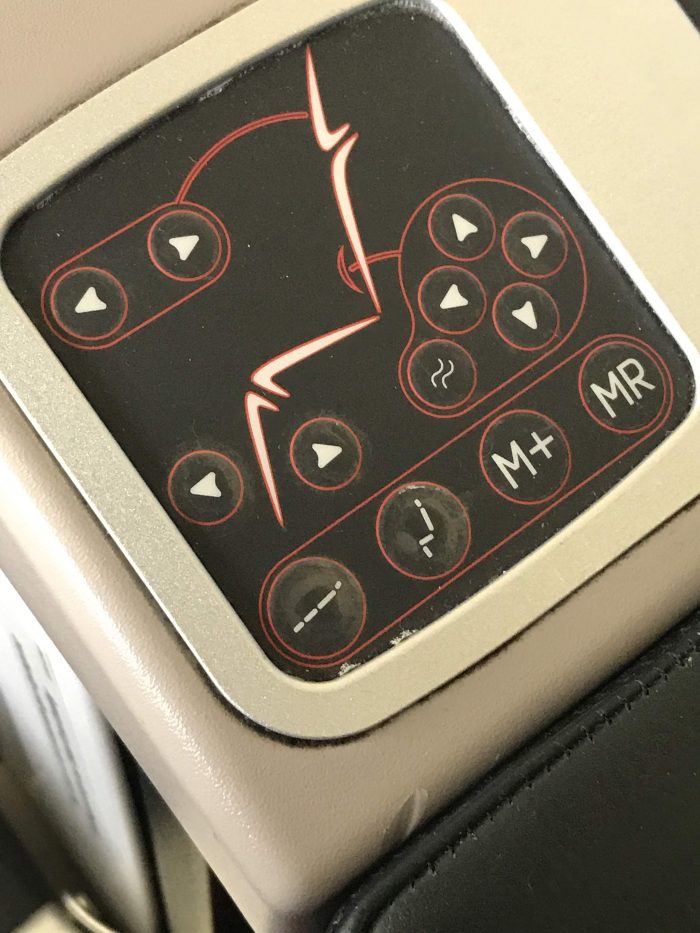 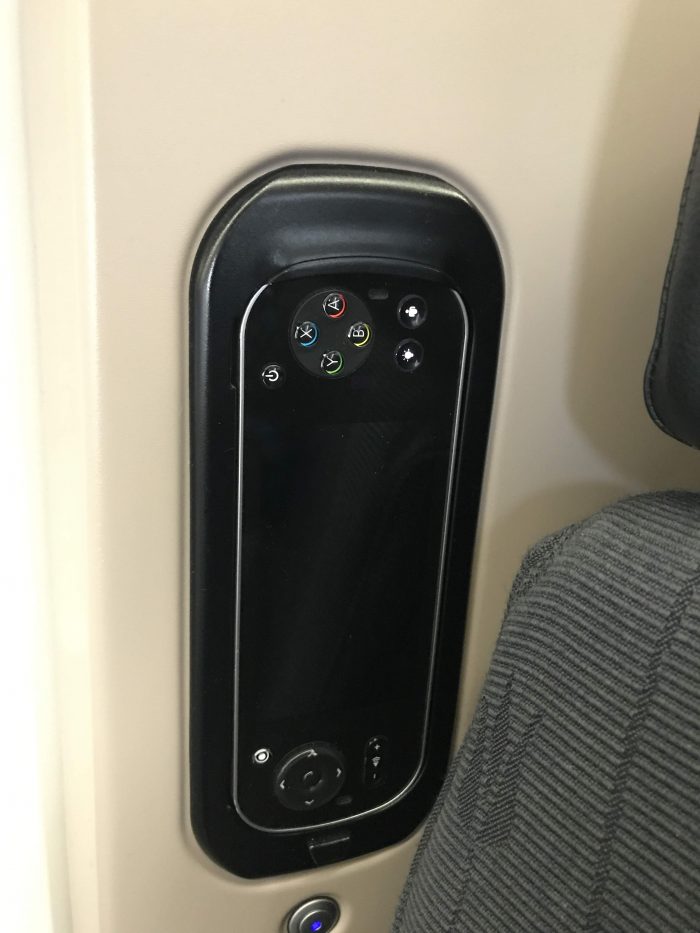 The seat had tons of storage. I managed to fit my carry-on messenger bag in the footrest in front of me, so I didn’t need to use the overhead bin at all. There was also good storage next to me at the seat, with more than enough room for a water bottle as well as the amenity kit & my phone. The amenity kit contained all the usual items, though it did also come with a shoe horn, which was a bit different. 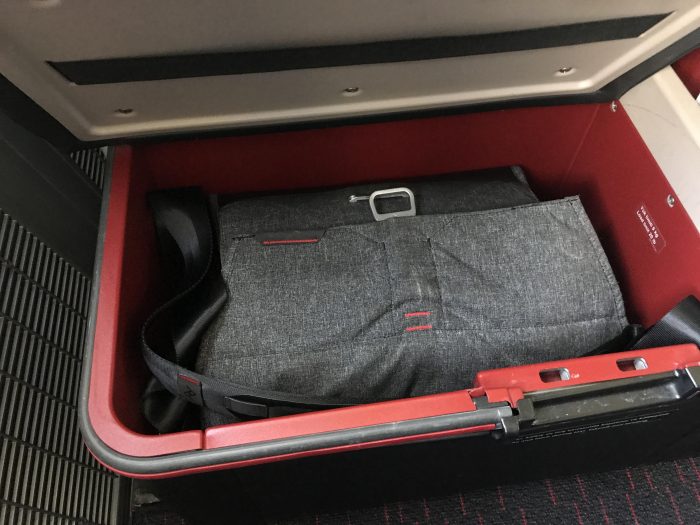 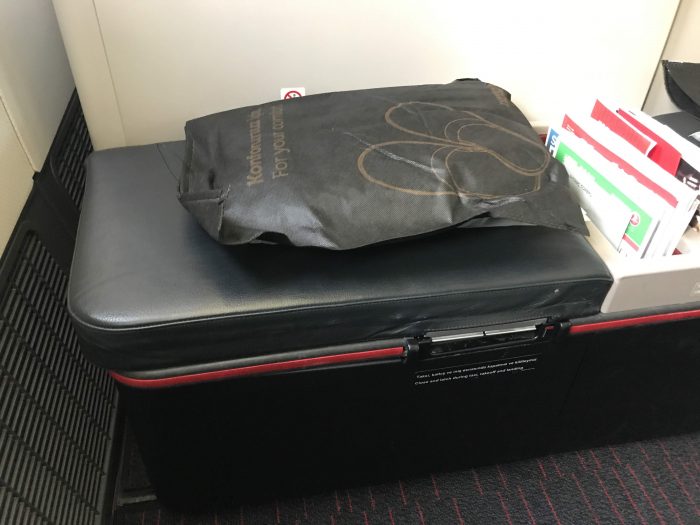 The cabin was a bit warm because as with many non-U.S. airlines, there were no fans. I always forget to dress for summer on flights like this in order to be comfortable. The cabin did begin to cool off a bit later, but it was still warmer than I would have liked.

While the rest of the plane boarded, flight attendants came around with fresh juices, including orange, lemon mint, & raspberry. 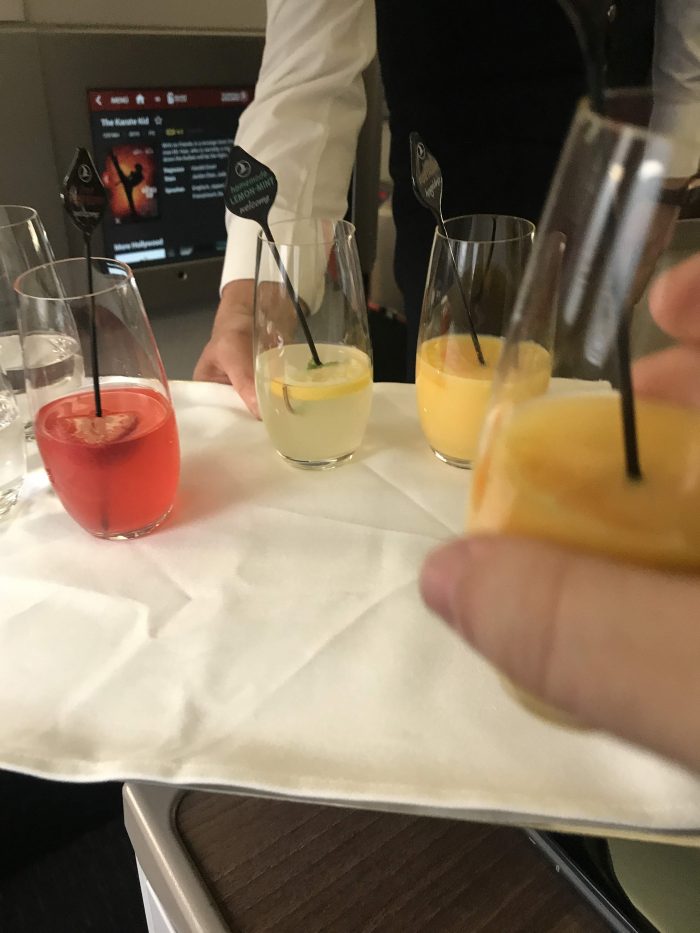 The inflight entertainment screens are decently sized, though they are fairly far away and not movable. Each business class passenger got noise-cancelling headphones, plus free inflight WiFi. 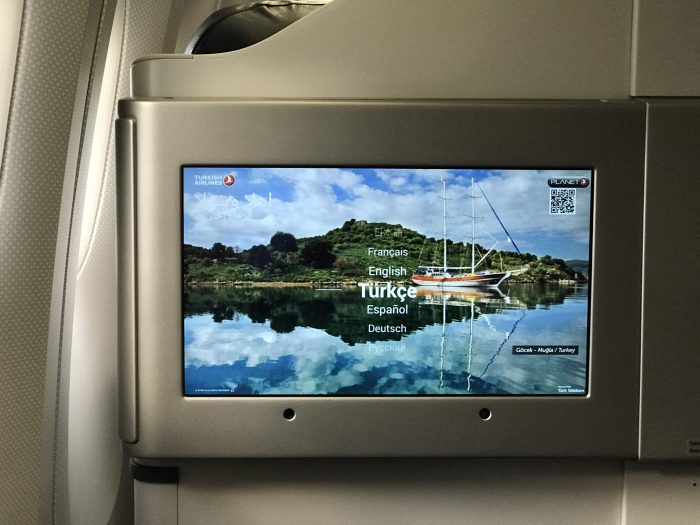 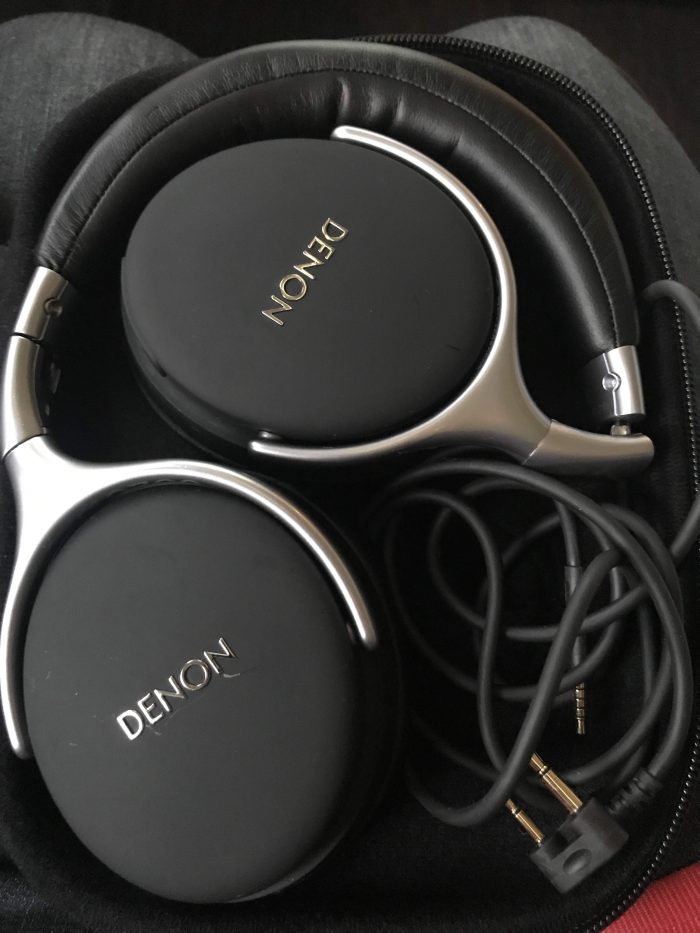 The entertainment selection was pretty good, plus there was also a small selection of live TV channels available.

Finally, it was time to depart. The Turkish Airlines safety video was also promoting Lego Movie 2, which made it reasonably entertaining. You can watch it below:

Not long after takeoff, flight attendants came around with pads for the seats. I hadn’t encountered this on any airlines before, and it’s a nice little touch. I imagine that 1) it’s a simple thing to do to make passengers a bit more comfortable and 2) it makes it so much easier to keep the seats clean. Try not to think about how many farts the last airline seat you sat in absorbed.

Next, the inflight chef brought around the business class menus. In addition to selecting dinner, you can also select a made-to-order breakfast ahead of time. The wine list had some Turkish wines available, which I of course tried with dinner. There was also a large selection of teas. Here are the Turkish Airlines business class menus from my flight to San Francisco to Istanbul. 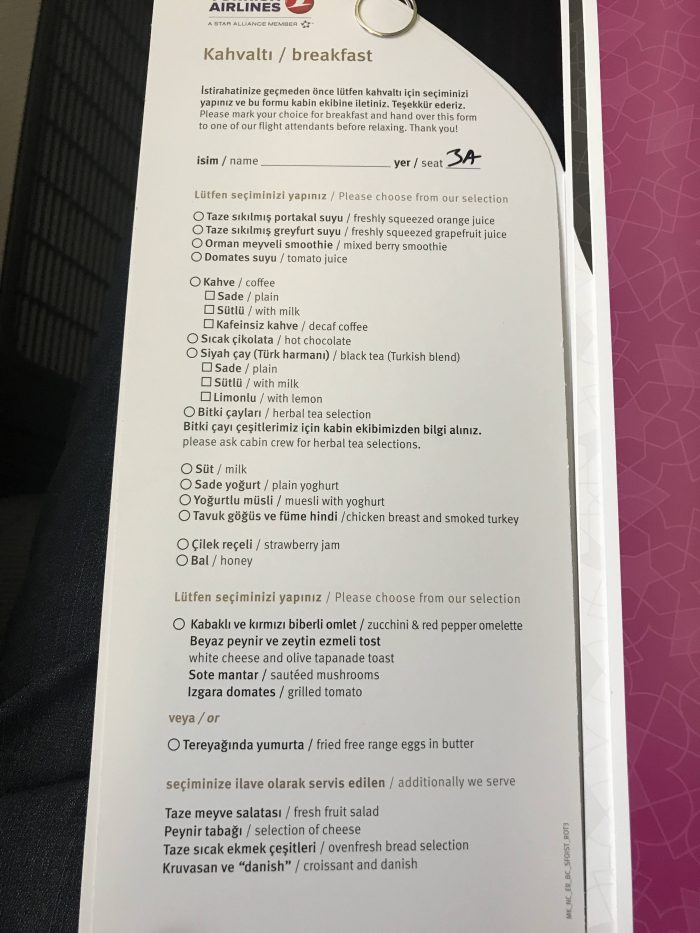 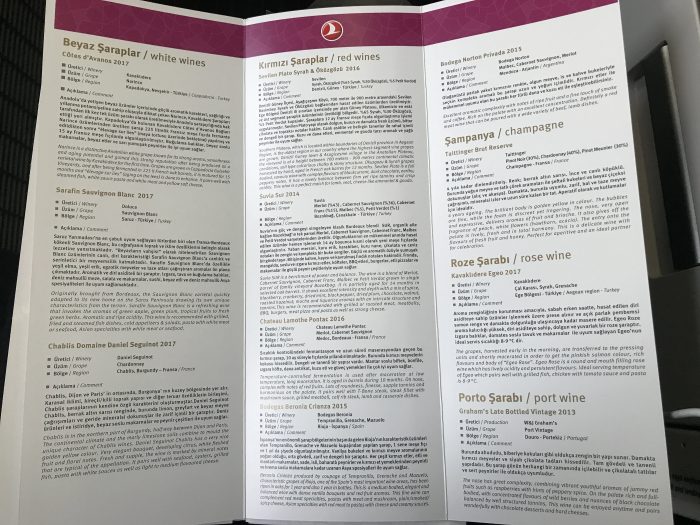 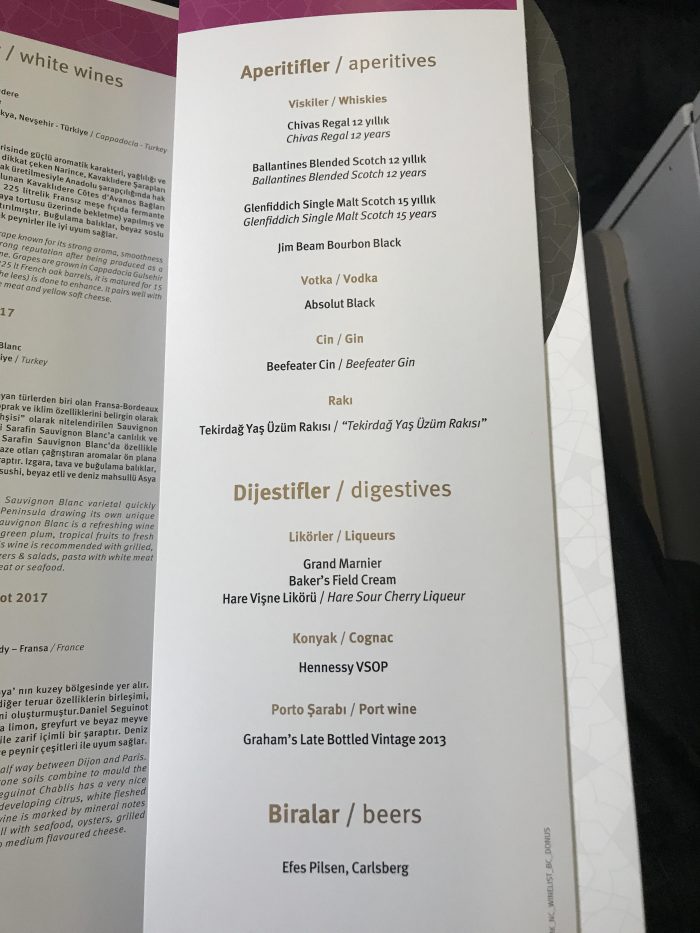 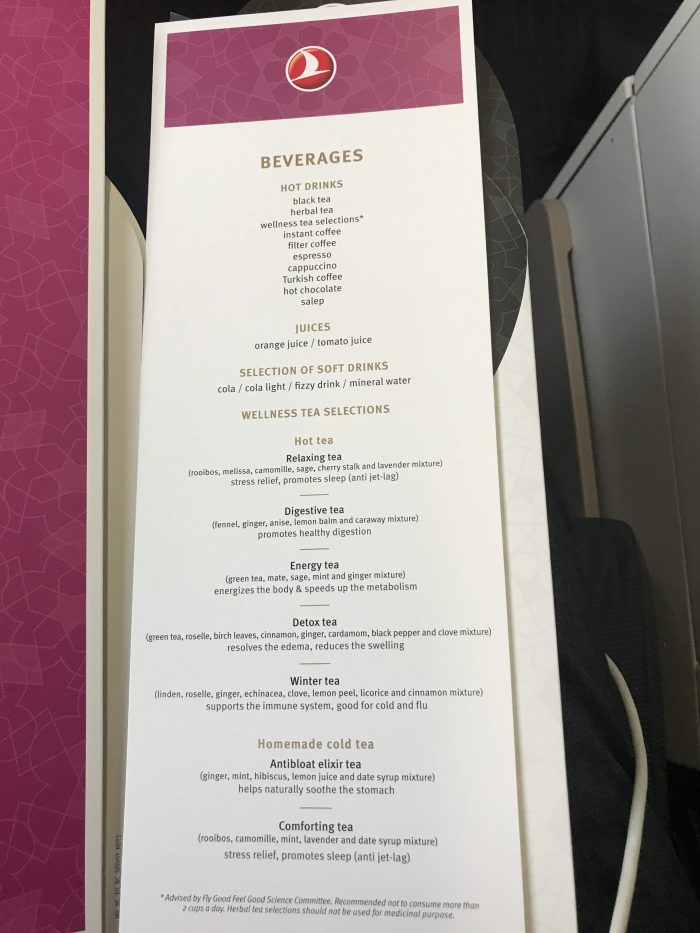 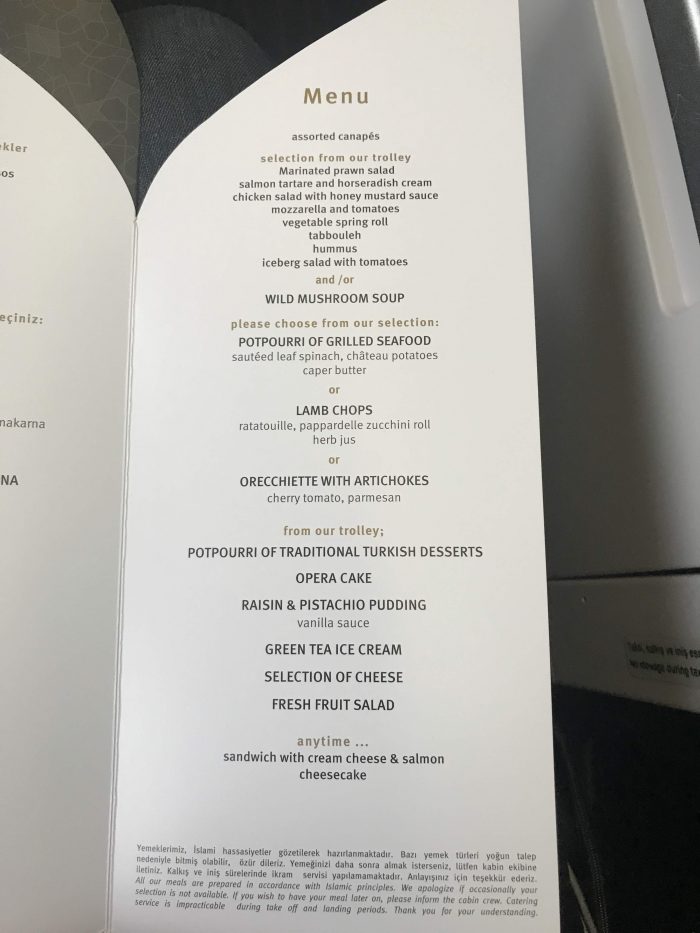 It was nearly an hour and 15 minutes before any of the food service started, but on such a long flight, that’s fine. Service began with a hot towel, then nuts. After that, there was an amuse bouche. 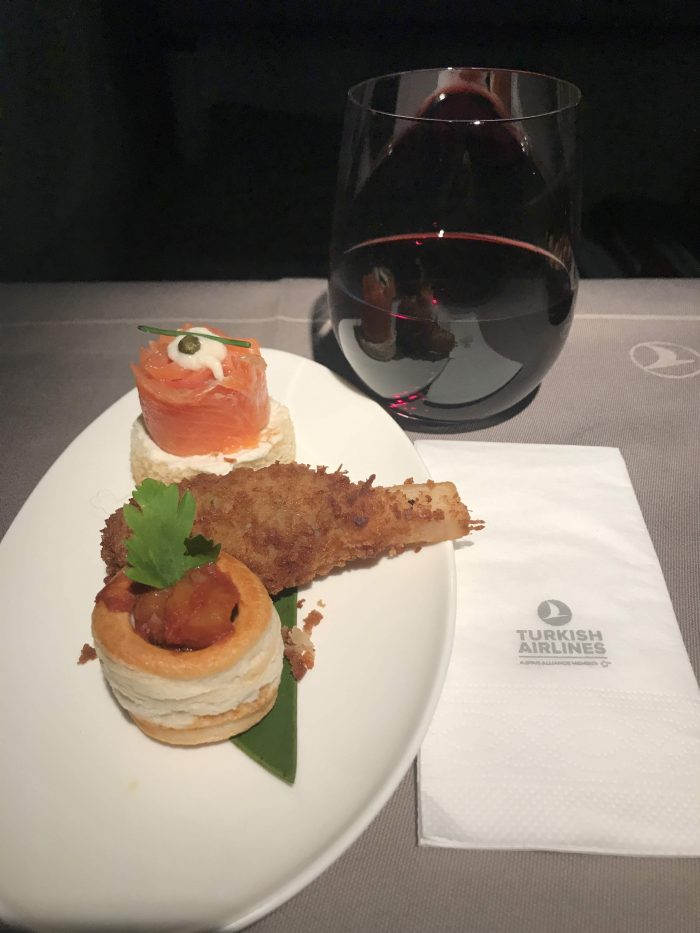 This was followed by a cart with condiments & electronic candles in little bags. For a brief moment, I thought they were actual candles, then realized open flame on an airplane would be a horrible idea. But the flicker of electronic candles does still add a nice bit of atmosphere to a meal. 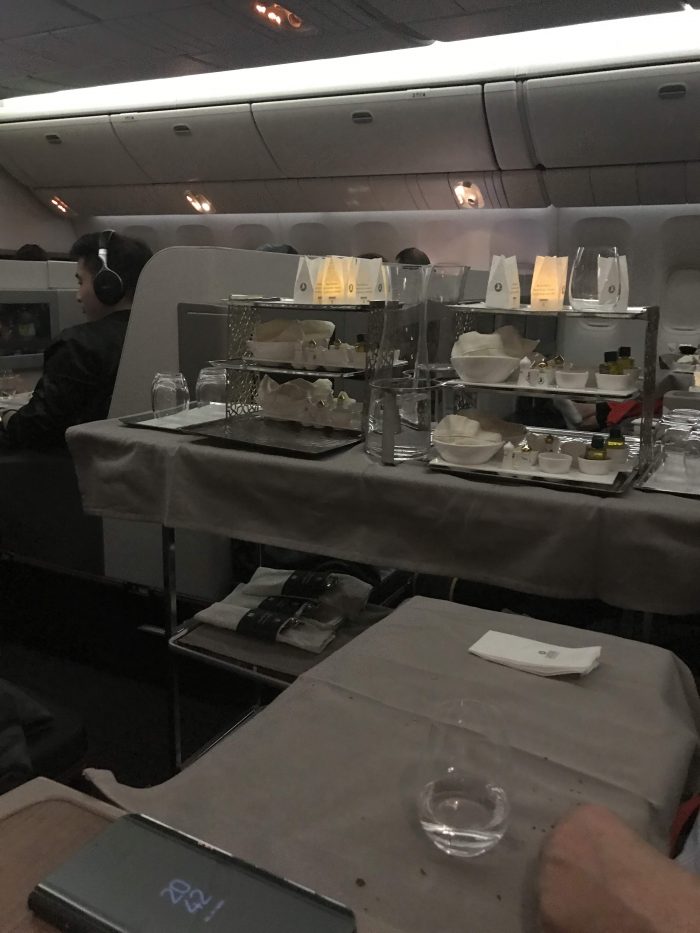 And look at how cute these little salt and pepper shakers are! 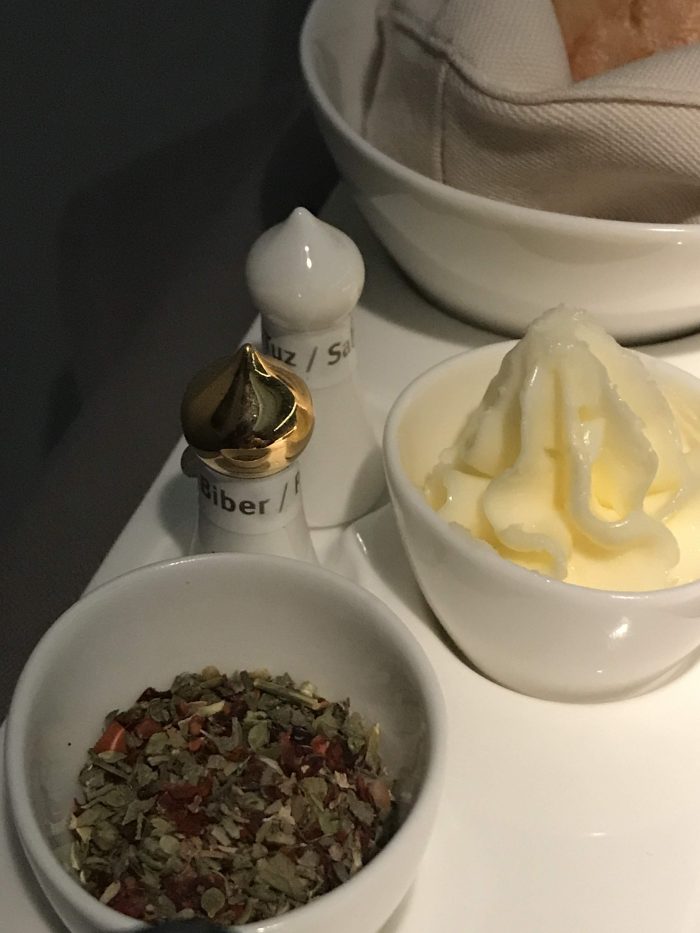 The appetizers are also brought around on a trolley so you can see what looks good & select whatever you want. This is one time where an aisle seat would be beneficial, as it was a little tough to see all of the items that were available. 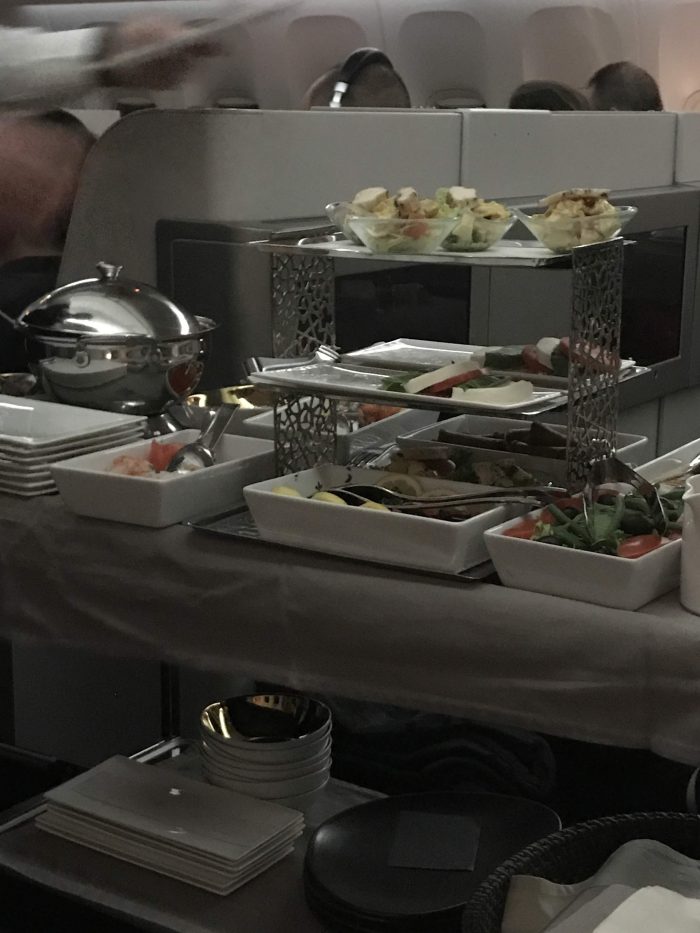 I had the salmon tartare, marinated prawn salad, and hummus. 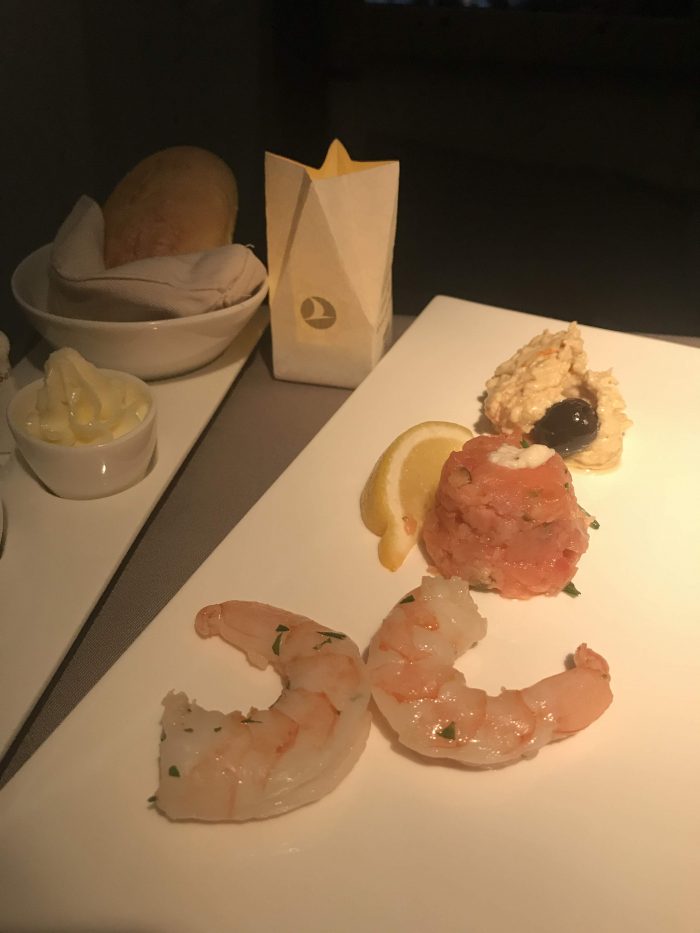 For my main course, I had the potpourri of grilled seafood. It wasn’t bad at all. 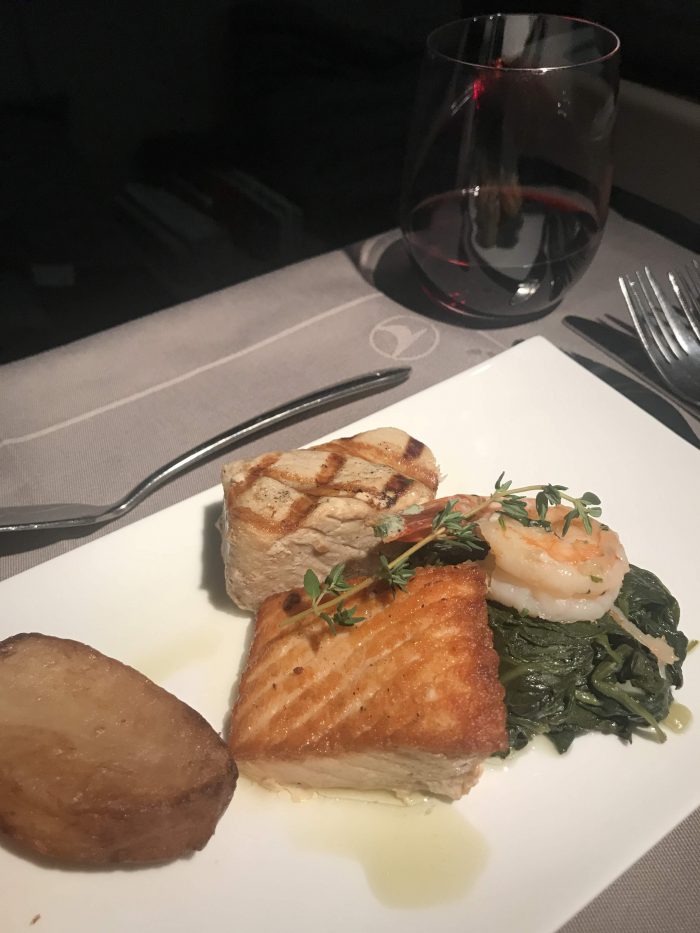 Dessert service was also served on a trolley. Each of the dessert items are mini, so you can try a few different ones. 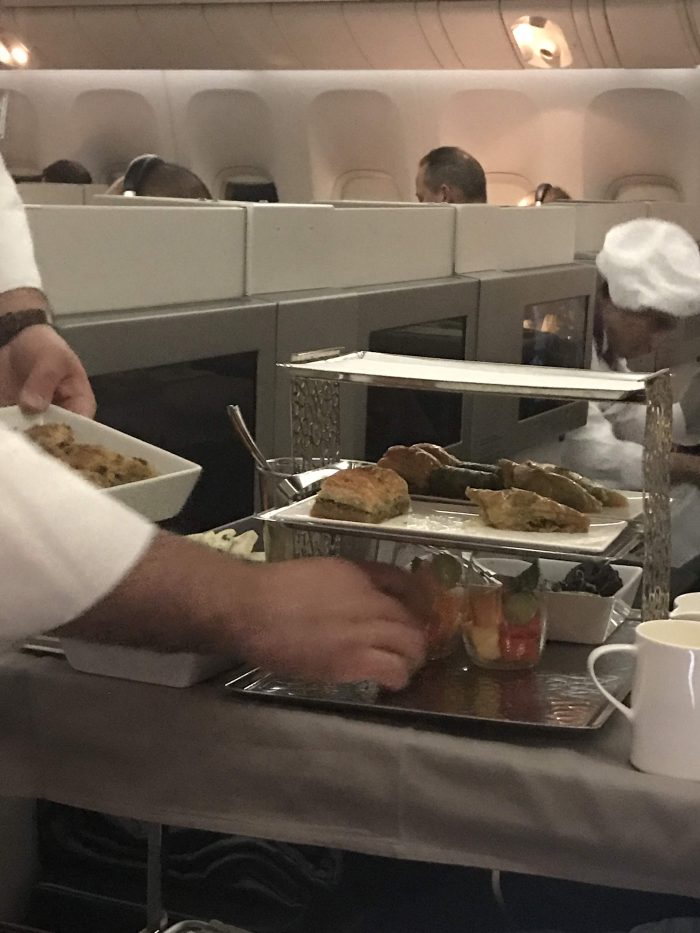 I had green tea ice cream, pistachio cake, and baklava. 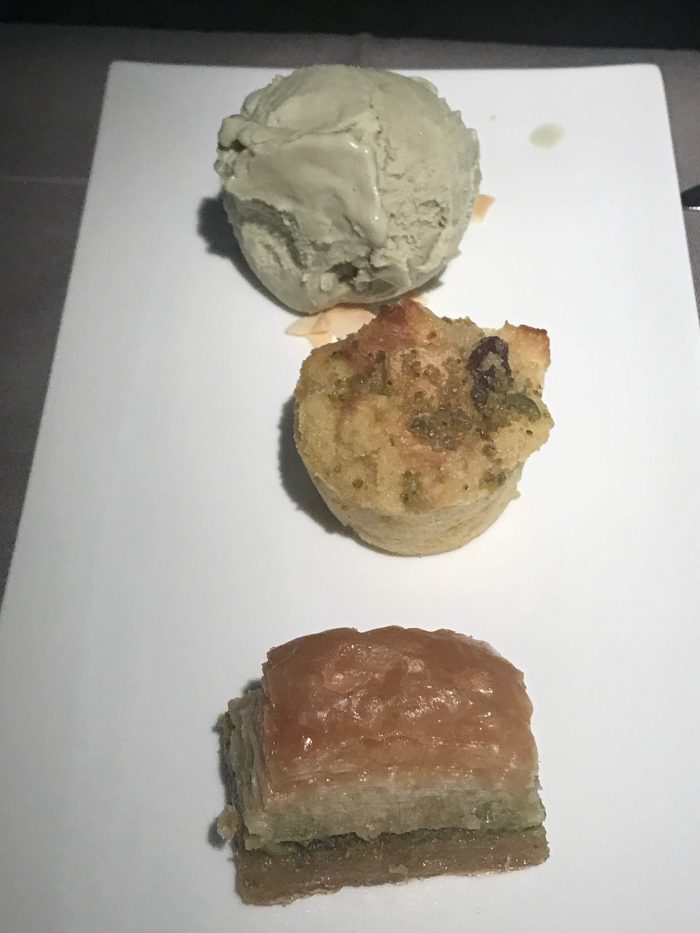 It was almost 3 hours into the flight when the meal service finally wrapped up, but it never felt slow. There was also an “anytime” menu available that had salmon & cream cheese sandwiches as well as cheesecake. This flight had lots of seafood & cheese, both of which are foods I will never complain about.

Finally, it was time to try to get some sleep. I put my seat into the lie-flat position. It was a bit narrow at the shoulders, but it helps to be a side-sleeper. I found the pillow to be quite decent.

Not long after I tried to fall asleep, a flight attendant made an announcement asking if there was a doctor on board. I guess everything was okay because we didn’t divert (not that there was anywhere to land nearby – by this point we were well over northern Canada). There was also a similar announcement requesting a doctor on my return flight home, so either this was an odd coincidence, or Turkish Airlines errs on the side of caution if someone isn’t feeling well.

I ended up sleeping surprisingly well. I woke up past 3pm Istanbul time, just a couple of hours before landing.

For breakfast, I had fried eggs & yogurt. 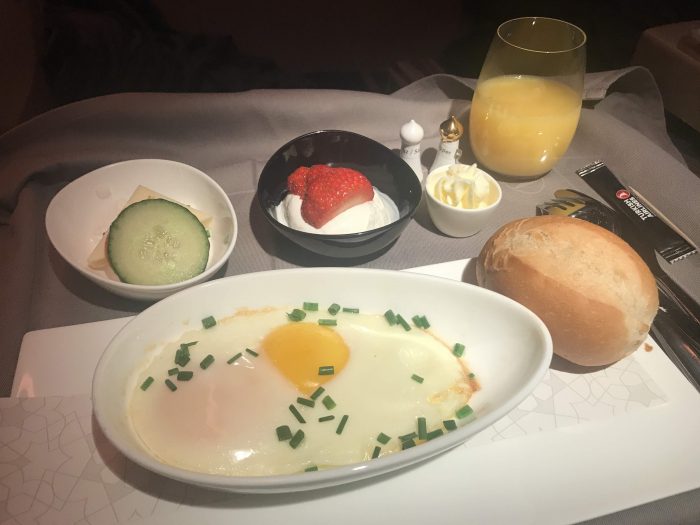 We would have landed in Istanbul earlier than scheduled, but we had to circle around for quite a while due to air traffic. We then landed & taxied to a remote terminal, which further delayed getting into Istanbul. At least there was a separate bus to take business class passengers to the terminal. Unfortunately, I had just missed the opening of the new Istanbul Airport by a few weeks. 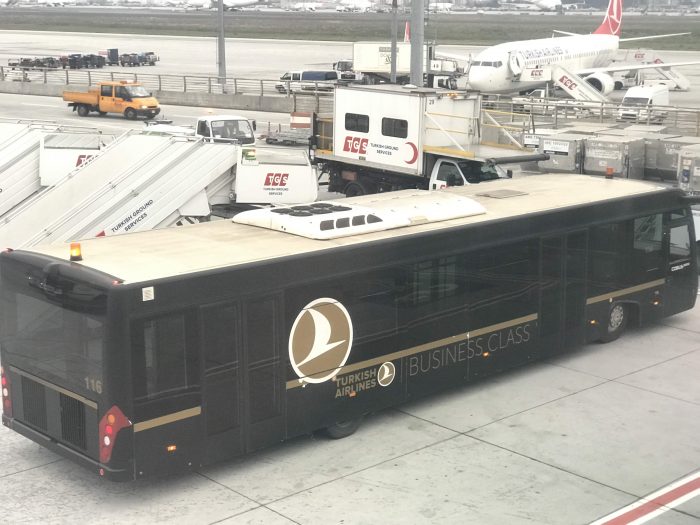 My return flight a couple of weeks later was similar, so I won’t be writing a separate review. There was a series of brawls in the row in front of me regarding the opening & closing of window shades, but that story will have to wait for another time. I will say that the Turkish Airlines employees all handled the midflight fight over Greenland quite well.

Overall, I enjoyed my flights in business class on Turkish Airlines. While these business class seats aren’t the best around, the food was quite good, as was the service. For such a long flight like San Francisco to Istanbul, it’s nice to be able to fly directly so pleasantly.