On somewhat of a whim, I decided to go to Germany for Oktoberfest this September. I had the time available from work, and with US Airways posting a fall flight sale to Europe that for some reason included flights to Munich during Oktoberfest, I figured there would be no better time to go to one of the most unique and popular parties in the world.

My itinerary took me from San Francisco to Philadelphia to Munich. Ultimately, following a long travel day on my return, I’d vow to never take 2 long flights in a single day ever again. On the way back, the first flight was 8.5 hours, then the final flight was 5.5 hours. Considering I would end up suffering a mild bout of food poisoning the evening before, this was not a pleasant day. In the future, I will either fly directly if possible, or have a short connection, preferably close to my destination, or whatever is best suited for dealing with jet lag in either direction.

That said, my flight from SFO to PHL was nice, as I secured the best coach seat on the USAirways Airbus A321, 23F. On a transcontinental flight like this one, this is the coach seat you want to get. See below why via Seatguru.com. 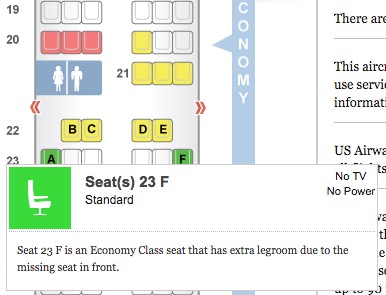 Notice how seat 23F has no seat directly in front of it, plus an even wider row in front of that. If you’re going to be crammed into coach for over 5 hours, you want to get a seat that lets you stretch your legs. Not only can you do this, you can also get up out of your seat by walking forward, since row 22 has a wide aisle due to the emergency exit.

On our ascent out of SFO, we were treated to amazing views of San Francisco on a clear day. 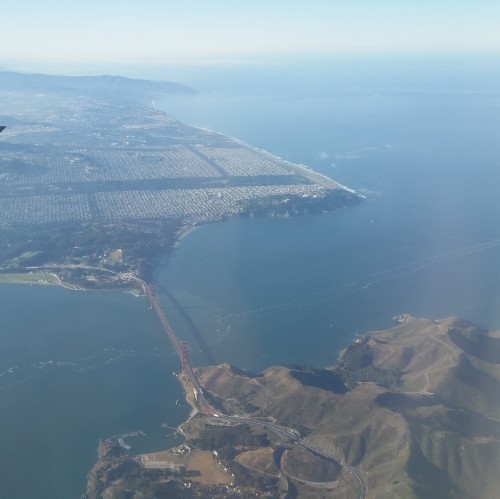 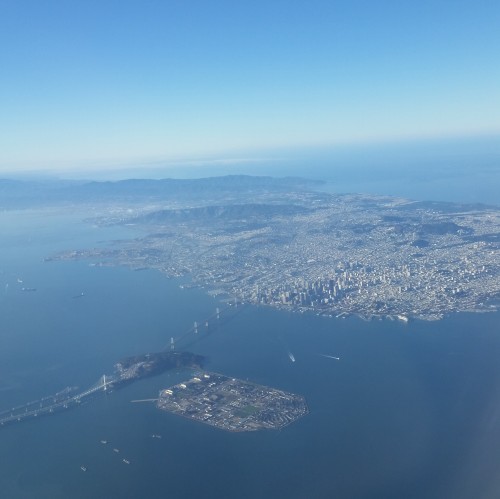 The rest of the flight was uneventful, and I arrived in Philadelphia with a few hours to kill. Since I have the Citi AAdvantage Executive World Elite Mastercard at the moment, I have access to all USAirways and American Airlines lounges. I headed to the US Airways lounge in the International concourse, and proceeded to eat all the free cheese and olives I could stand until it was time for my flight to Munich. While I wouldn’t spend money to get lounge access, they’re far nicer than the regular gate areas for relaxing and recharging electronic devices.

My flight from Philadelphia to Munich wasn’t the most pleasant I’ve been on. I was near the back of the plane in a center row. Up until right before the flight there had been nobody assigned to the center seat, but unfortunately my luck didn’t hold. Instead, I ended up sitting next to the most fidgety person I’ve ever seen. The guy seemed to be getting over a cold, which was also awesome. Since he had the middle seat, he got first call over the armrests, which I’m fine to let happen. The issue was that the guy couldn’t make up his damn mind and stay in one spot. So he would move to one position, then I’d move to a spot where I could be comfortable, then 2 minutes later he’d switch again. I had no plans to sleep on the flight anyway, but it’s nice to not have to constantly be moving just because some guy is jostling you.

At one point about halfway through the flight, long after meal service was concluded, I got up and took a quick stroll to the galley area in the back of the plane so I could have some space to stretch. I’ve done this on many long flights before. Doing a few exercises & stretches is a nice way to avoid some soreness once you get off a plane.

Unfortunately, I was thwarted in this effort after about 30 seconds by a flight attendant who said I couldn’t be standing in the area near the bathroom, the galley, and the rear exit. Nobody was using the restroom, and there was no meal service going on. The only thing I could think of was that standing near the exit was somehow an issue, but like I said, it’s never been a problem before. I’ve grown accustomed to surly service from USAirways flight attendants, but this was a new one to me.

Her surliness grew as we started to descend into Munich. Unbeknownst to me, there was something wrong with my seat back, so it would not stay in the upright position. Instead, it would gradually work its way back into full recline. I put my seat up as we descended, only to have the surly flight attendant tell me 15 minutes later that it needed to be put up. I realized what had happened and tried to tell her that it was broken, but she ignored me. Not wanting to cross her yet again, I then spent the remainder of the flight pushing the button to put it up every 2 minutes, apologizing to the person behind me. I eventually told another flight attendant that the seat was broken so they could get it fixed.

We landed in complete fog in Munich. It was so foggy that until we touched down, we had no idea how close to the ground we were.

The immigration lines in Munich were odd. There was no order to it, and everything was crammed into an area just around a corner from a door. I quickly figured out there were a couple of lines on the far side that were being ignored and went to those. Processing took no time at all, and then it was time to head in to central Munich and on to Garmisch-Partenkirchen.