Trento and the rest of the Trentino region of Italy is best known for being the home of the Dolomites, the gorgeous UNESCO World Heritage mountain range that towers above the green valleys below. These valleys are filled with vineyards & farms, many of which make Italy’s famed grappa. If grappa is too strong for you (or if you just want something different to drink), Trentino also has a burgeoning craft beer scene. As of 2019, the region has 33 breweries, many of which can be found in and around the regional capital, Trento. I visited Trento for the Traverse 19 travel blogger conference. Here is where you can find the best craft beer in Trento.

During my time in Trento, I had beers from about dozen different local craft breweries. Passion Italian Craft Beer was my favorite. Passion was the one I took a 20 minute bus ride & wandered through an industrial park to reach, dragging along another travel blogger friend whose trust I have earned by not yet getting us murdered. 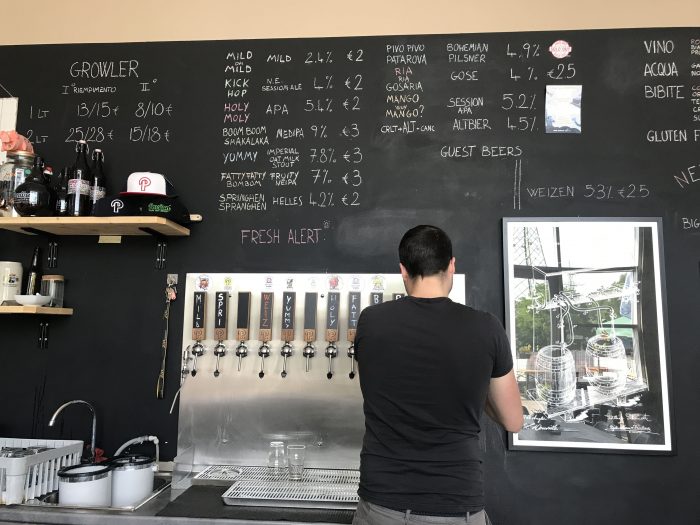 To get to Passion from Trento, take the 17 bus north to Lamar-Ponte Avisio. When you get to the strip club with the “disco sexy” sign out front, you’ll know you’ve arrived. From there, it’s about a 5 minute walk to the brewery. Note that the first sign for Passion that you will encounter has an arrow pointing you further down the road to get to the tap room. If you’re on foot, ignore this. You can walk through the parking lot, which has been closed off to form a beer garden, to reach the front of the building. 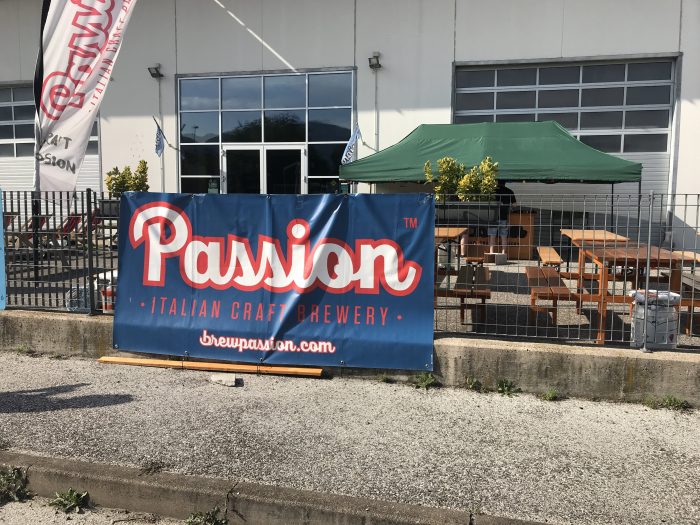 This big front patio has plenty of space for sitting and staring at the surrounding Dolomites while enjoying a beer from a rotating selection of 12 taps, plus there are also food trucks outside. The brewery was hosting a seasonal event called Big Bang Passion the next day, which looked like a lot of fun. 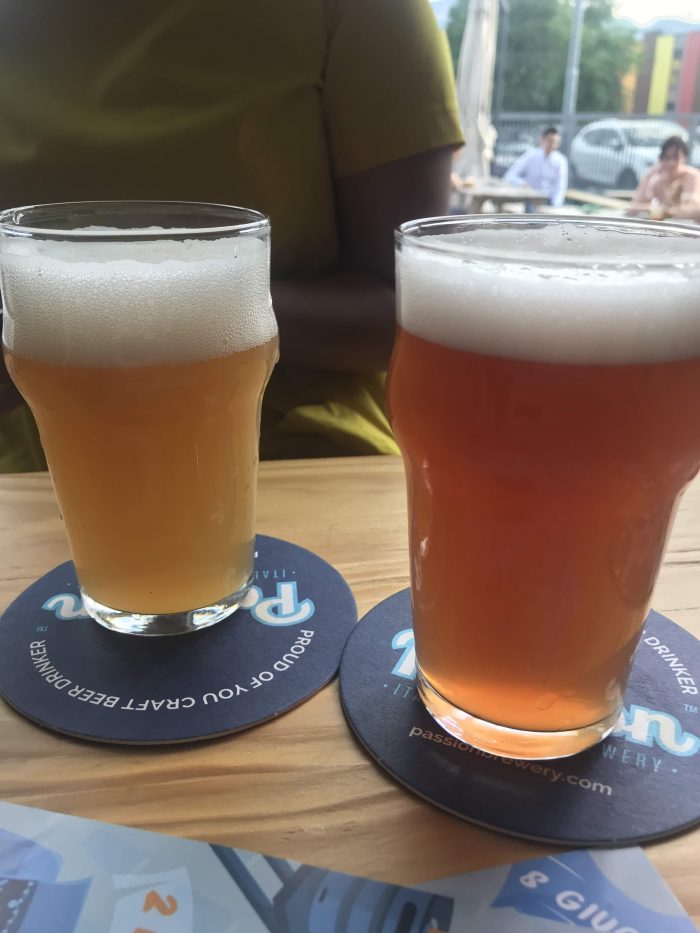 The brewery was founded by three friends, Marco, Michele, & Marzio. Given the loyal following the guys already seem to have already garnered, look for more and more Passion beers around Trentino in the years to come.

Pizzeria Uva E Menta has a few taps of craft beer, a few bottles, and some great pizza. 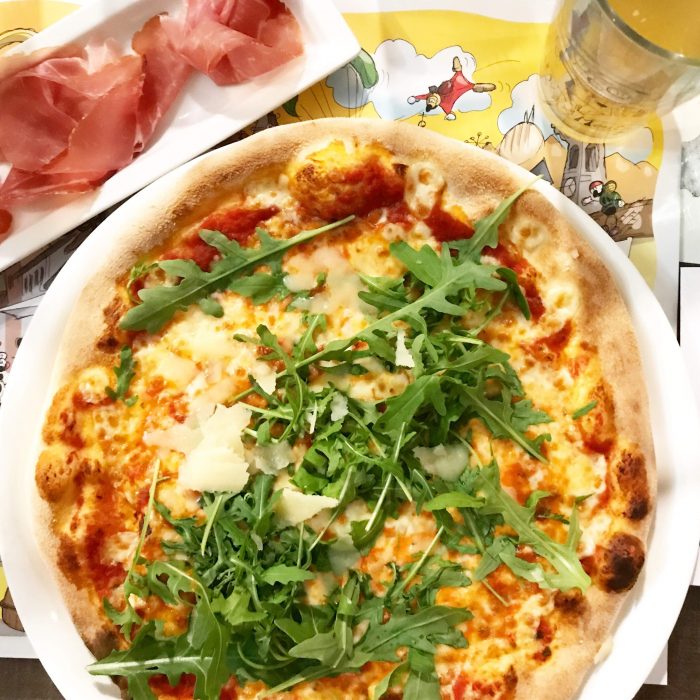 Then around the corner, on the opposite side of the building, you’ll find the true beer gem, Uva e Menta Cafe. This is where you’ll find Trento’s best craft beer selection. 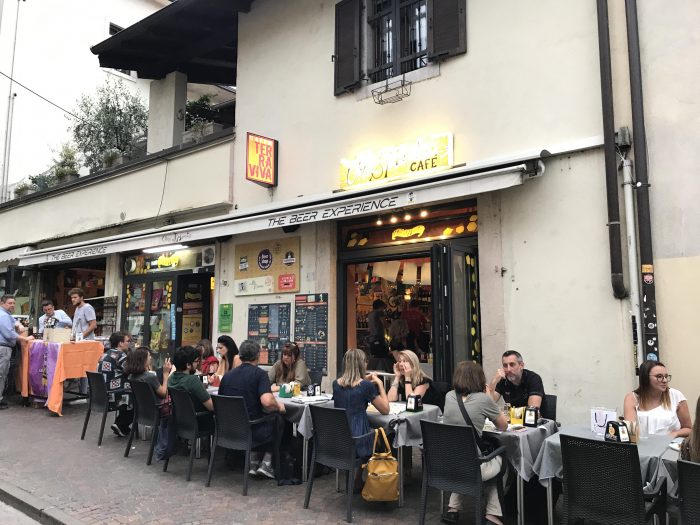 Uva E Menta only has 5 taps, but they do have local beers, including the aforementioned Passion, whose Boom Boom Shakalaka I couldn’t pass up having again thanks to the fun-to-say name. Say it out loud right now. Say it again, but with more gusto. There, your day is better, isn’t it? 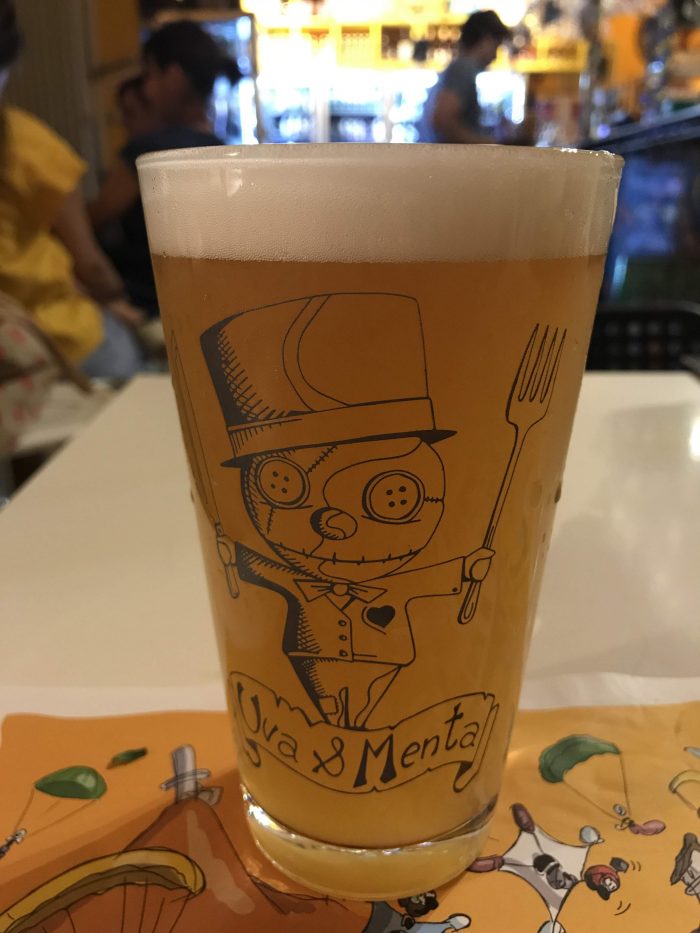 The bottle selection is the best reason to visit Uva E Menta. There are hundreds of bottles available, including loads from all over Italy, plus a large Belgian selection, and several from BrewDog, including some of their more limited Dog & Paradox series releases. Despite being labeled as “The Beer Experience”, Uva e Menta Cafe also has a full bar, plus wine & coffee. 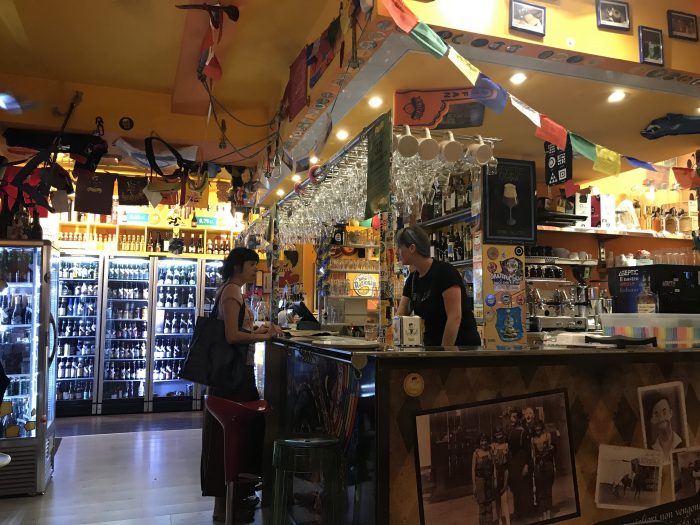 The staff members were all friendly & knowledgable. My server asked me if I’d had a particular beer I’d selected before (Imperial Ghisa from Lambrate), and when I said that I hadn’t, he told me all about it. The bar also hosts tastings & a beer fest.

There were beers from many Italian breweries I’d never even heard of, including CRAK, which my server said was named the best Italian brewery in 2018.

Outside, you’ll find a large patio, while inside, the walls are decorated with all the colors of the rainbow, plus beer signs from all over Italy & the rest of the world. There are also plenty of fans to cool the place off on warm summer days. 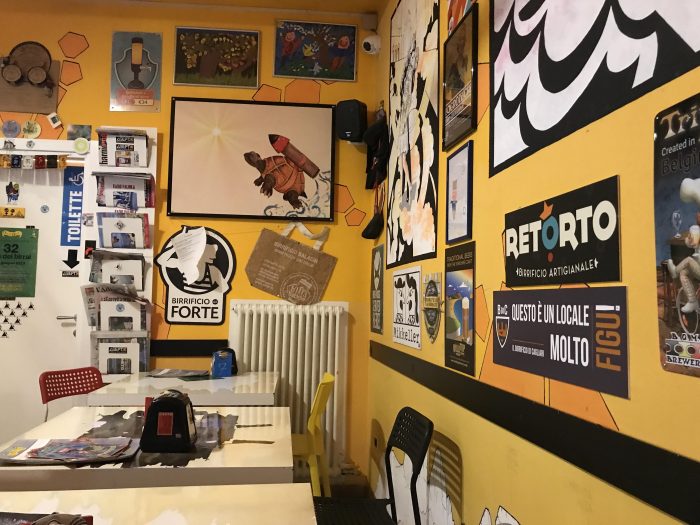 While the pizzas from Uva e Menta aren’t available at Uva e Menta Cafe, the cafe still has a full food menu with snack plates, toasties, focaccia pizza, and salads, so you won’t go hungry. 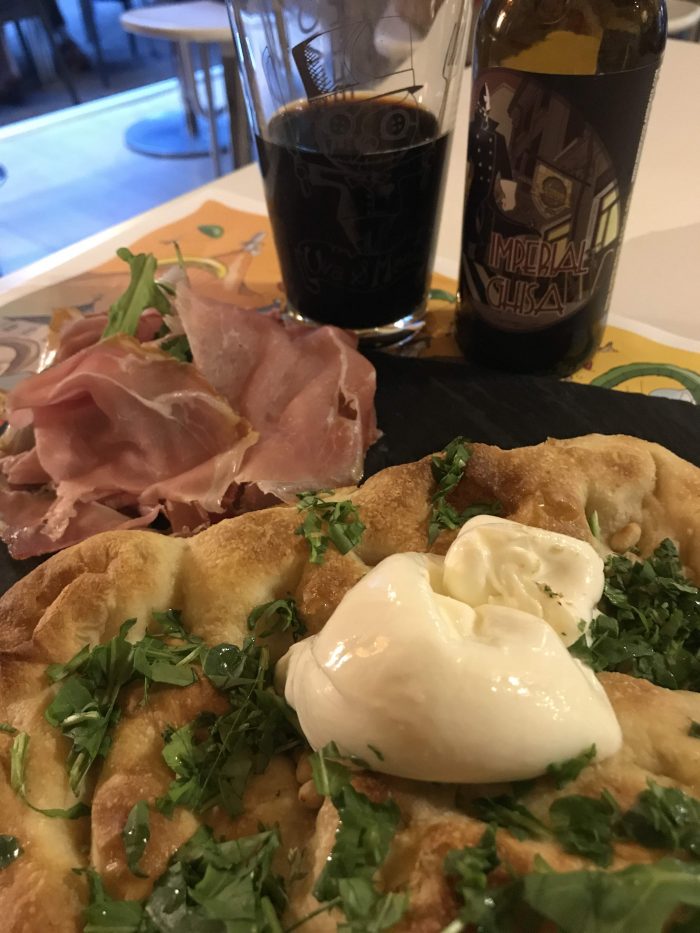 One note: according to Google, the hours of operation said Uva e Menta Cafe closes at 10pm, but at 11pm on a Tuesday, it was showing no signs of closing, so I think those hours may apply to the pizza place.

L’angolo 33 was packed on a Friday night. The bar has 12 taps of beer from local craft breweries. Like much of Trento, the crowd was young, but this place was especially boisterous. It’s on a lively street with music out front, so between that & the people watching, it makes for a fun evening. 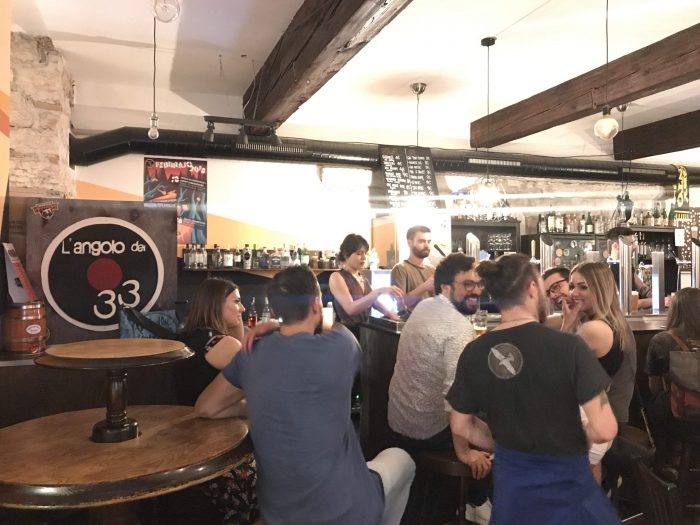 From the outside, Birreria Pedavena looks like an average sized pizza & beer place. However, go inside, and you’ll find that you can keep going inside, to more and more rooms, outdoor patios, or brewing areas. The place is massive. 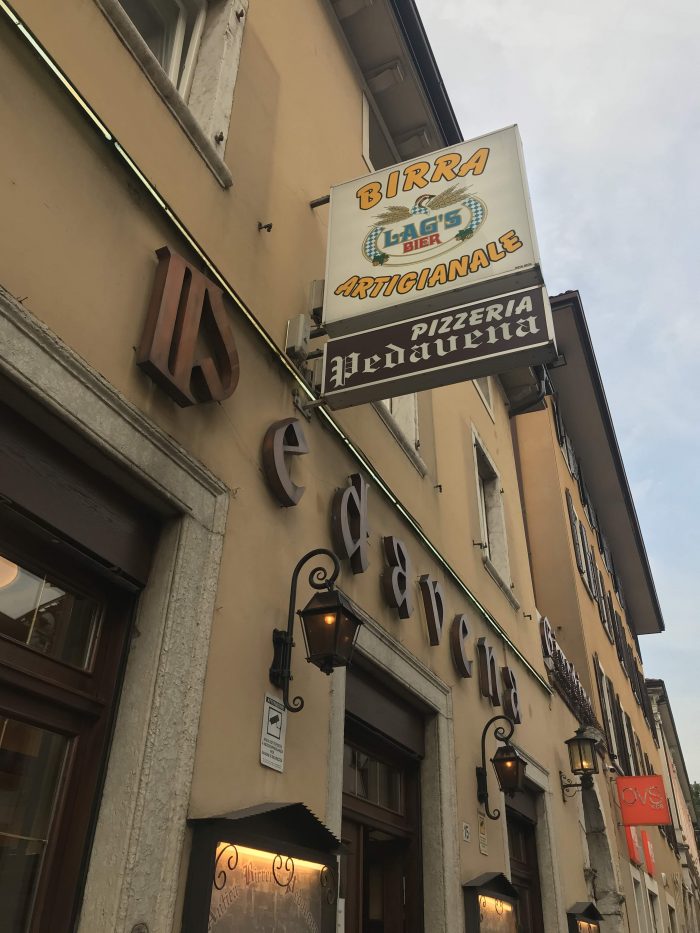 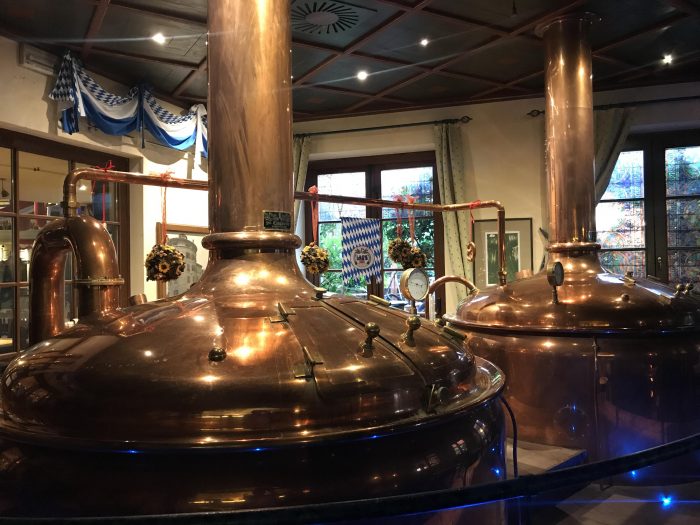 In the very back, you’ll find a huge space that’s often used for events. This is where the closing party for Traverse 19 was held. 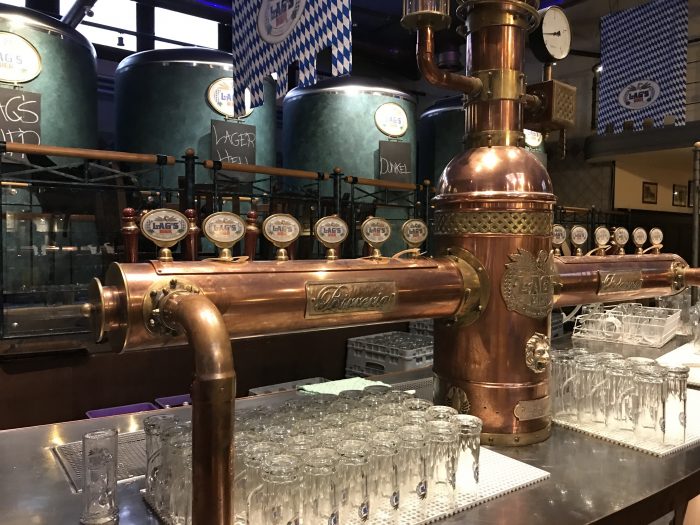 As far as the beer, there are a few basic varieties available, including their showcase Lag’s Beer. The pizzas are quite good. 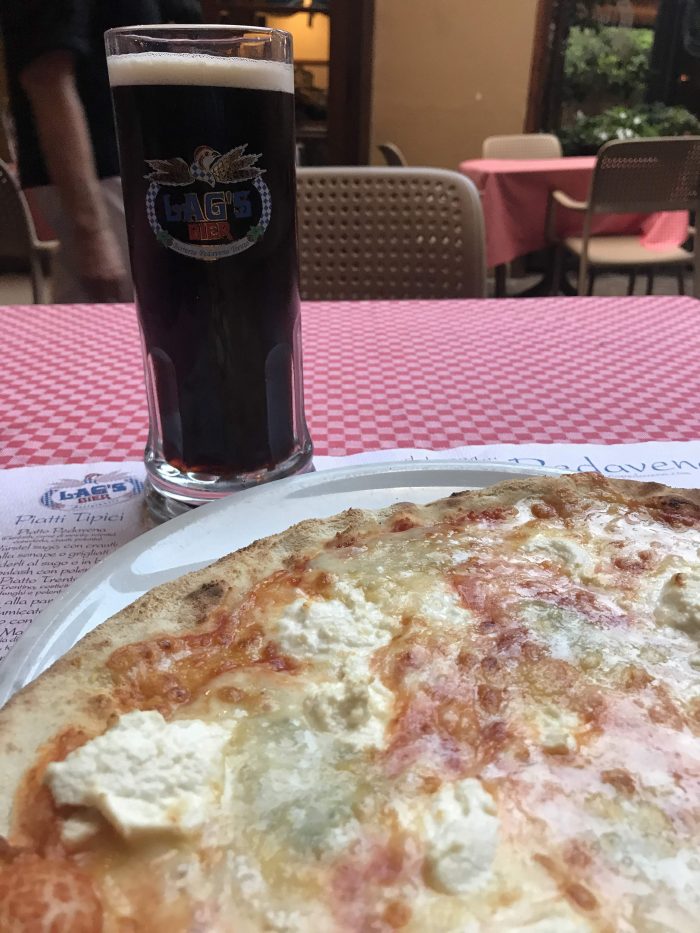 Il Gatto Gordo features beer from Birrificio Plotegher, which is located in Trentino, just south of Trento. The brewery is not far from Castel Beseno, which also serves their beer. 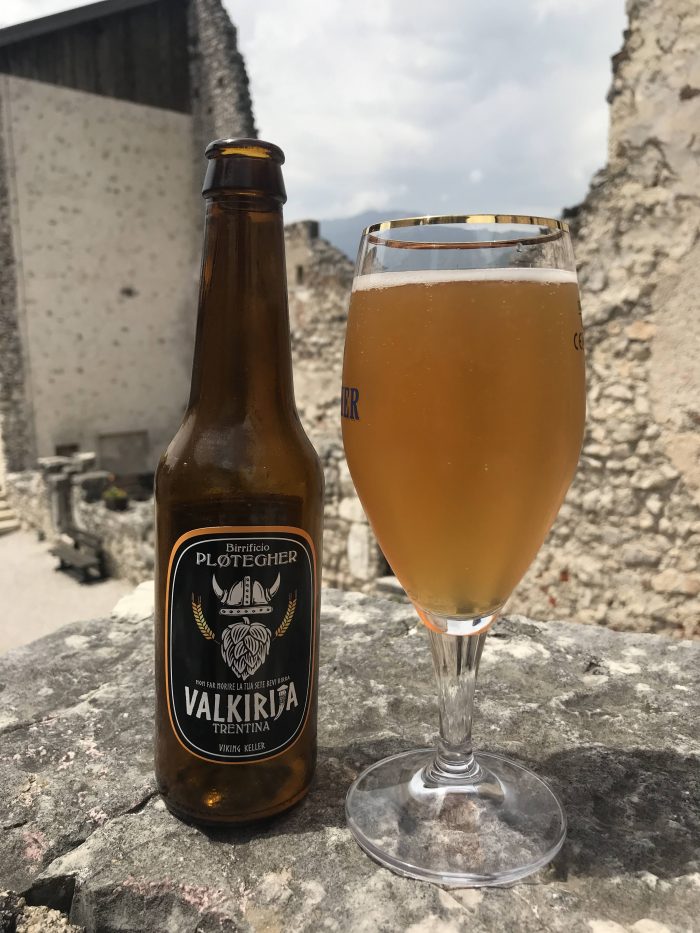 During the daytime, the bar & outside street are chill, but later at night, especially on weekends, it’s a popular place to stand outside with a beer. It’s a good place to chat with locals. 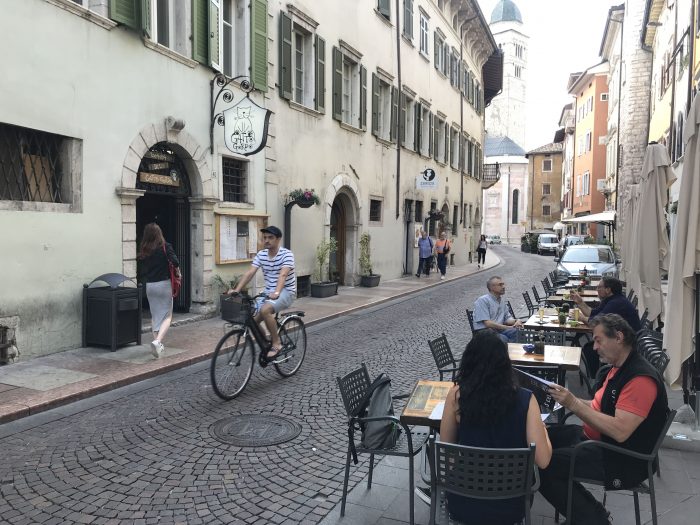 They also had some empanada-like snacks that were a pleasant surprise. 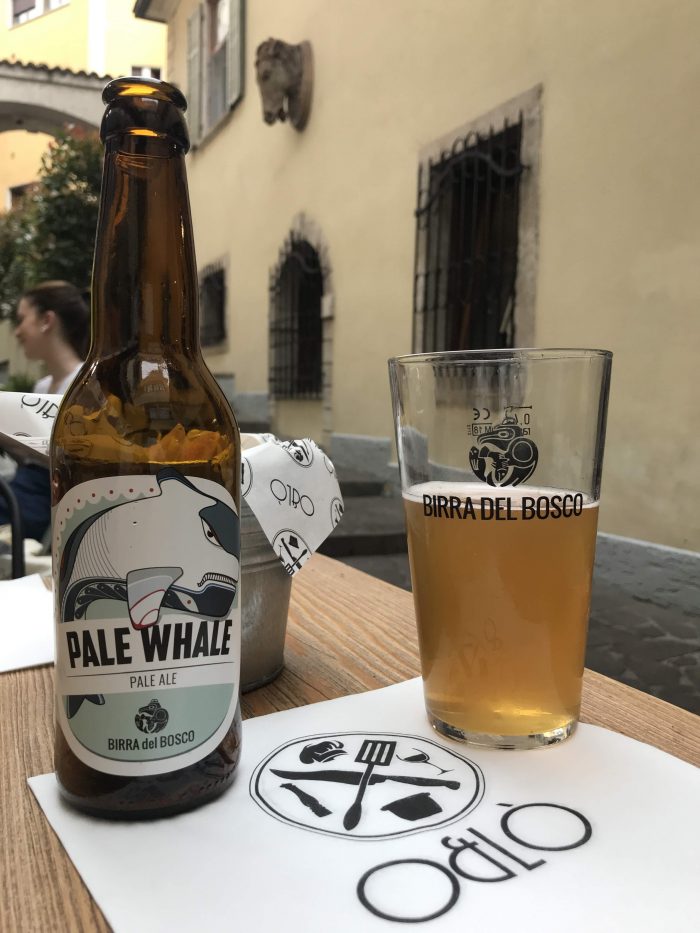 It’s not a bar that you’ll stumble upon easily, as it’s located down a bit of an alley in a quieter part of Trento. That said, local students have certainly found it, as the patio was bustling. It also helped that it was one of the few bars in town that was open on a Sunday. 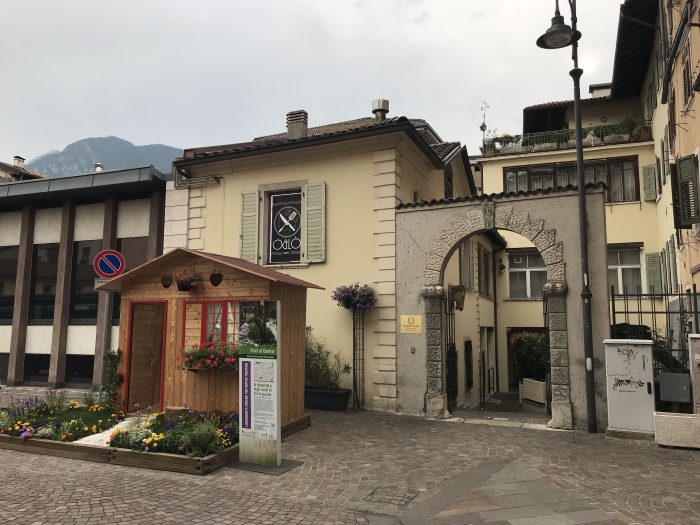 In addition to a few varieties from Birra del Bosco, there’s also a menu of burgers, fries, chicken nuggets, and other snacks.

Busat is located in Riva del Garda, which is over an hour away from Trento by bus. It’s a beautiful town on Lake Garda, so it makes for a nice day trip if you’re visiting Trentino. 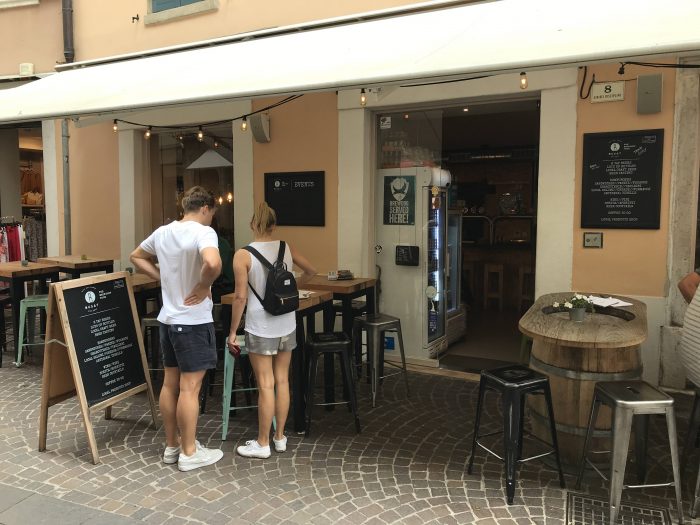 Opened in 2017, Busat has 8 taps, a couple of which feature local Italian beers. There are also a few dozen bottles available. 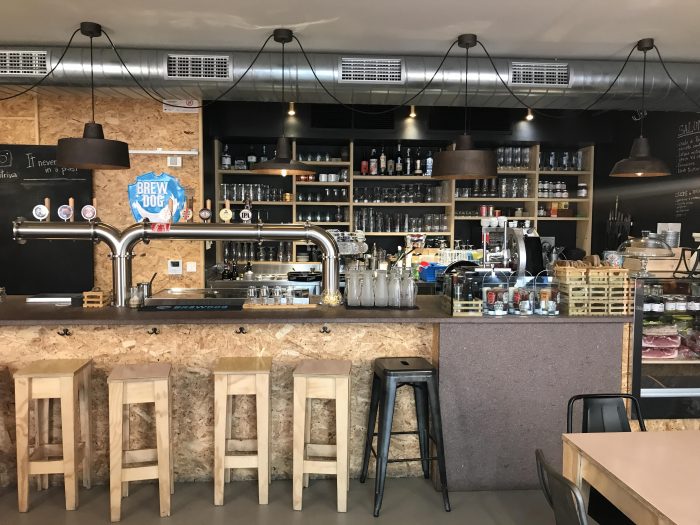 One of the beers on tap when I visited was called Pastei from a small brewery called Birrificio Leder. It was described as a “low fermentation craft beer with ancient cereals, berries and fruits. Produced using spelled and buckwheat and with the addition of fresh fruit such as cranberry, cornelian, raspberry and gooseberry.” I’m not normally a huge fan of fruit beers if they aren’t citrusy, but it was the perfect beer for a hot summer day. It had a lovely pink color that went well with the burrata I ate. 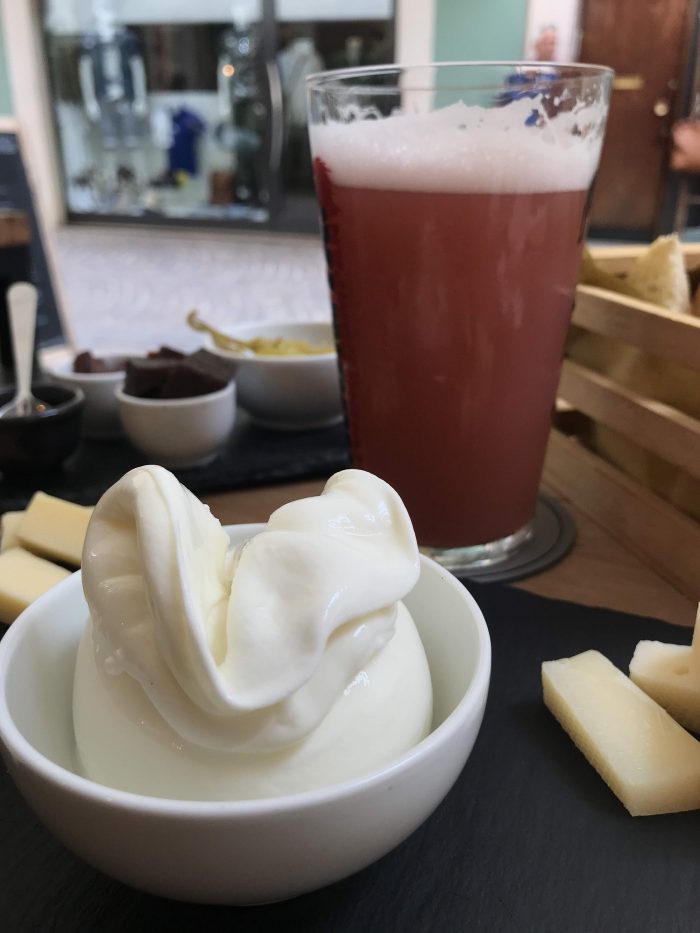 The food menu features local cheeses & meats, as well as burgers. If you’re in Riva del Garda for the day, Busat is a great lunch option just off a main square in the center of town.

Other breweries in Trentino

With clean water & a heritage for well-made artisanal products, Trento & Trentino will surely see many more craft breweries opening in the coming years. After all, what’s better after a long day of hiking or skiing than a nice pint of beer?

Have you spotted other great places in Trento & Trentino for craft beer? Let me know in the comments! 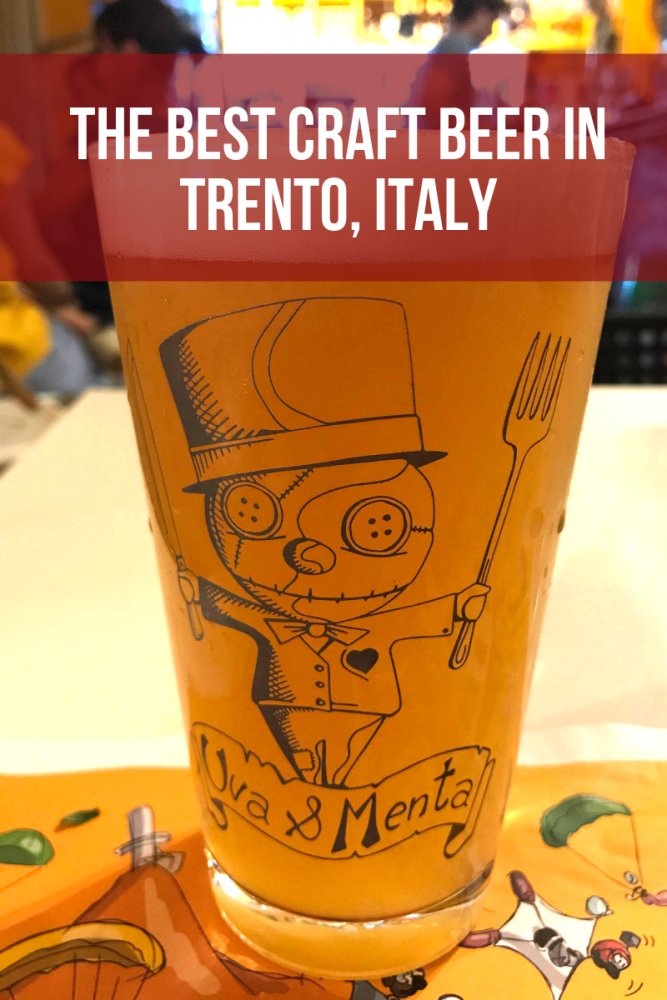