Istanbul is known for many wonderful things. Its food is perhaps some of the best on the planet. Its history is some of the longest & most intriguing. Its sights, from the architecture to the views across the Bosphorus to the radiant golden sunsets are gorgeous. What Istanbul is not known for is craft beer. Alcohol is subjected to high taxes in Turkey, thus discouraging many drinkers. Coming from expensive San Francisco, I had no real issue with paying the equivalent of $8-9 USD for a cocktail or $5-6 USD for a craft beer, but compared to other prices in the country, you’ll experience quite a shock if you want to drink in Istanbul. That said, there are a few good places where you can go to drink craft beer in Istanbul. Here’s what I found during my visit.

The Populist is the home of Torch, one of two main craft breweries in Istanbul. 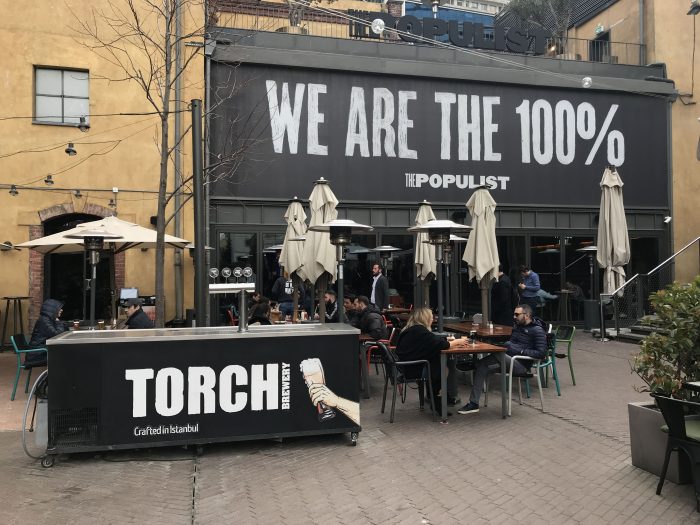 The bar & Torch brewery are located in the former Bomonti Brewery, which has been turned into an entertainment complex with several interesting bars & restaurants. Bomontiada is a bit away from where most visitors to Istanbul are likely to be, but the city’s good public transportation makes it easy to get there. The closest metro station is Osmanbey. 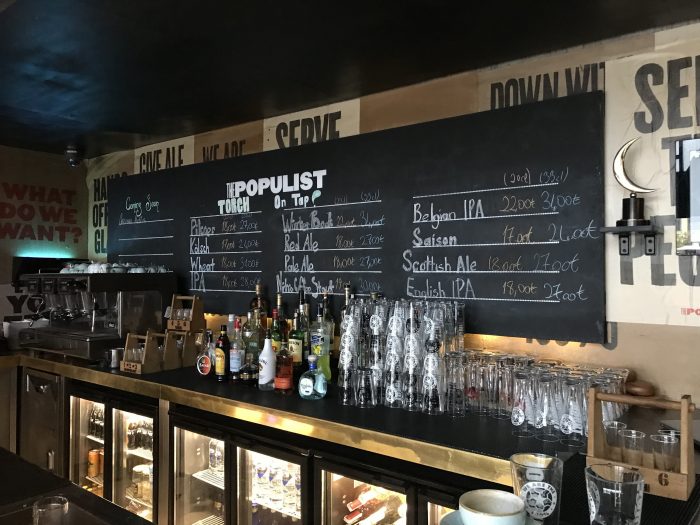 The Populist has a nice selection of beer, with a good variation in styles. The food menu has a lot of meat and BBQ. 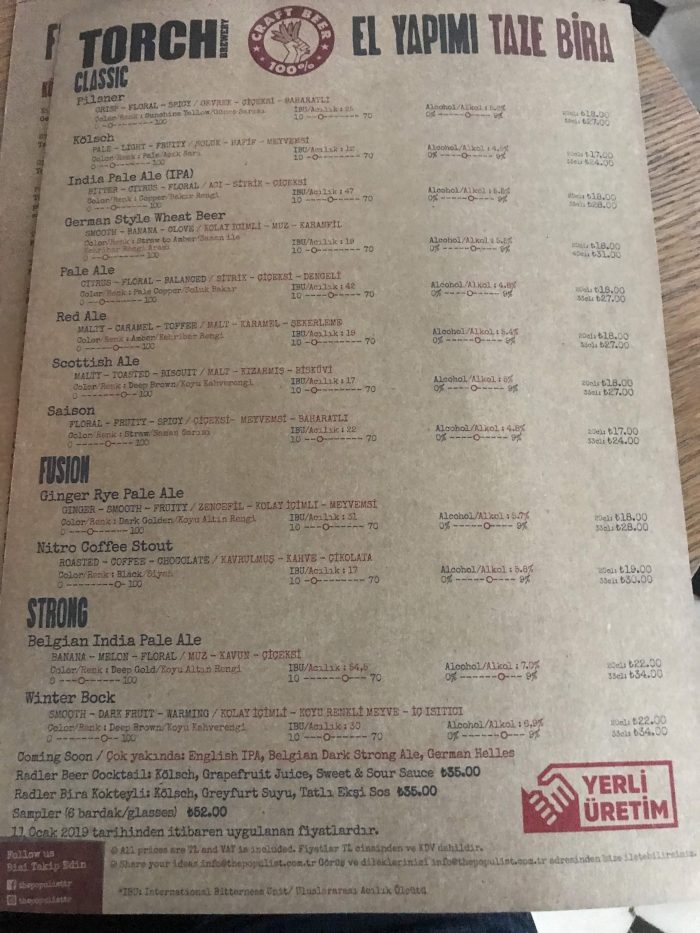 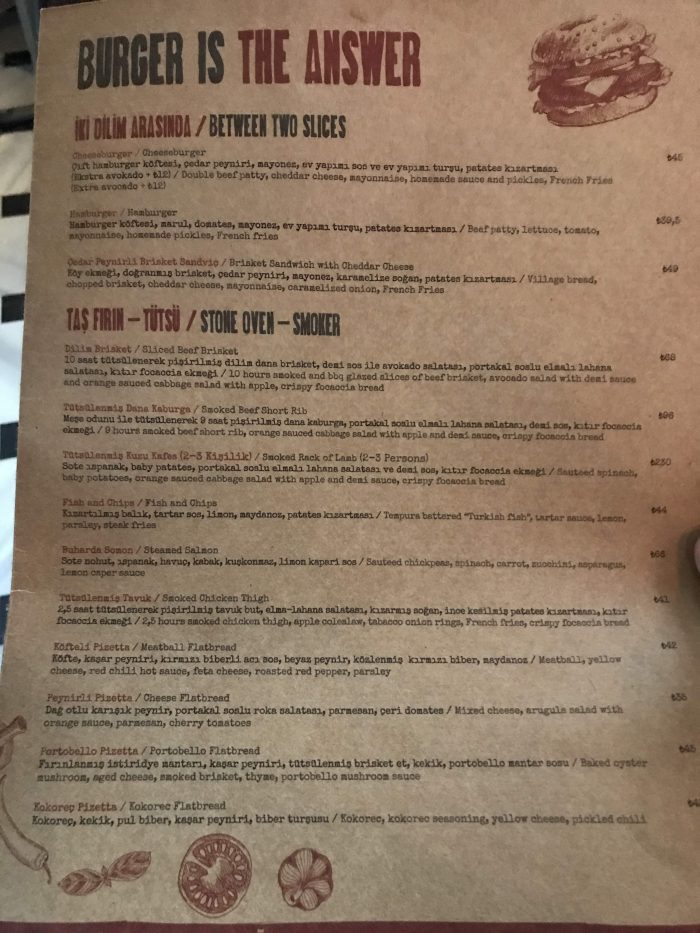 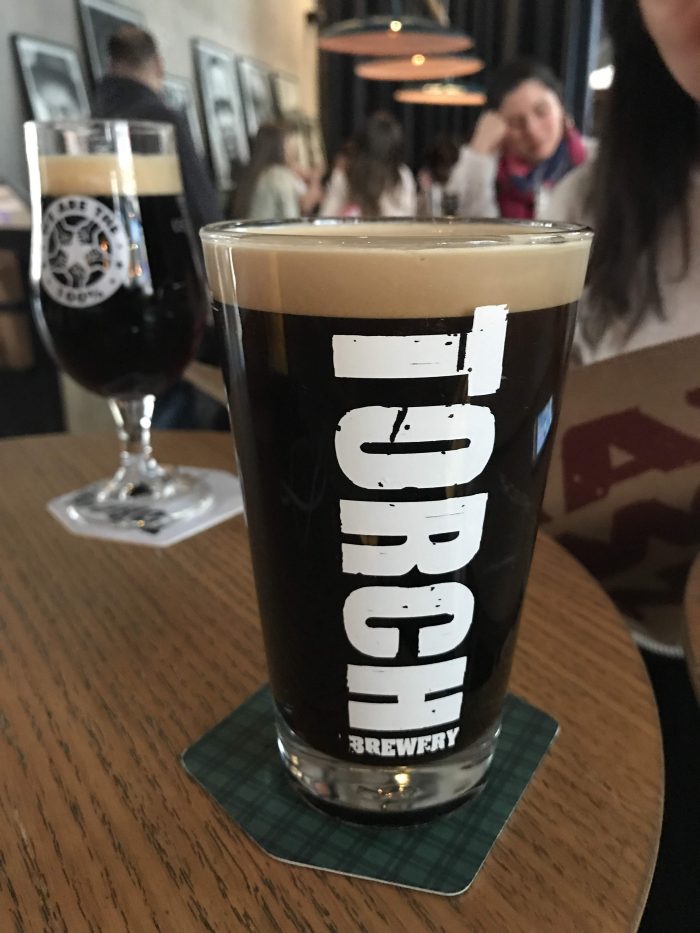 Overall, The Populist feels more American & British than most other bars in Istanbul, but it does everything well. It’s a cool spot in an area that’s a fun night out.

Bosphorus Brewing Company is the other craft brewery in Istanbul. As with The Populist, it’s also a bit of a journey to get to, but if you’re taking the time to research beer options here, then you’re probably ok with a bit of a trek for a pint. Gayrettepe is the closest metro station, though the walk does involve a hill & passes underneath a highway. 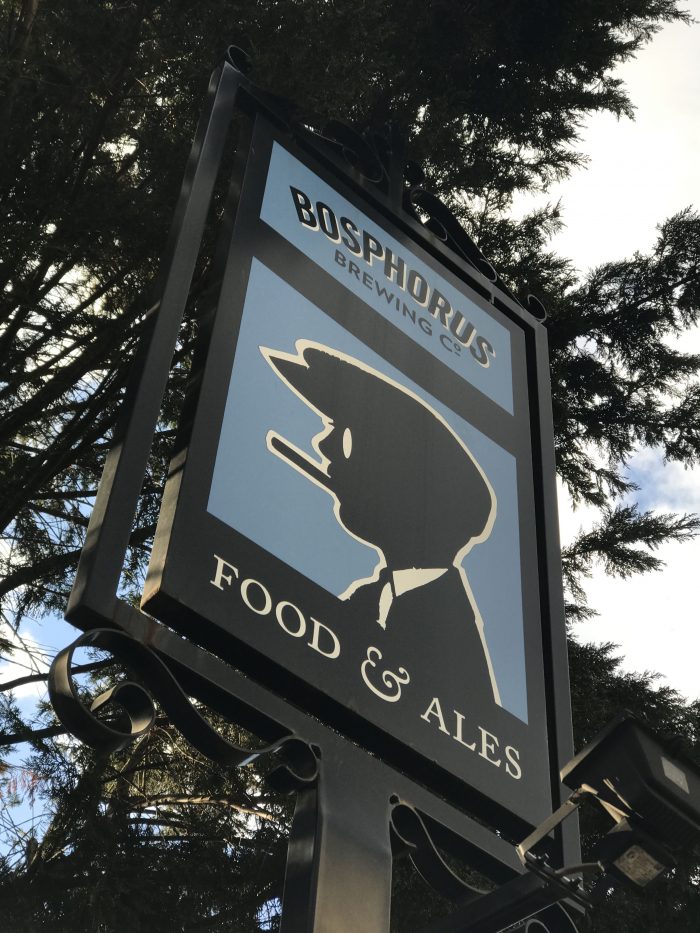 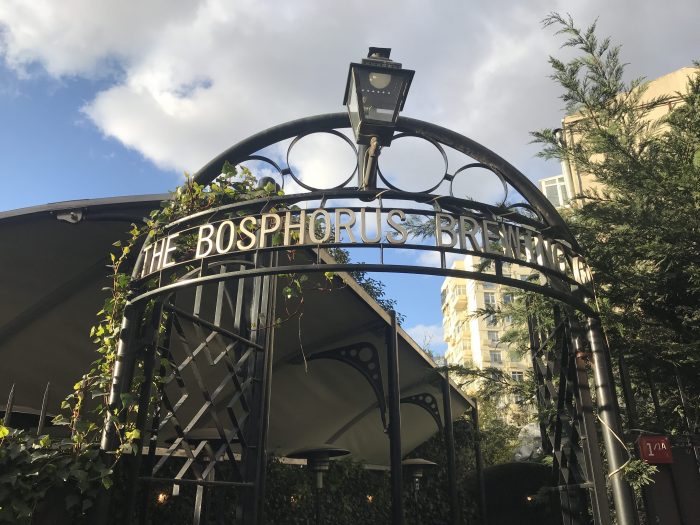 Once you make it, you’ll be rewarded with 8 taps of their house brewed beers. Bosphorus feels very much like an English pub. Their beer styles have more of a British influence than American (think real ales), though the bar food menu had a mix of both American & British bar food. 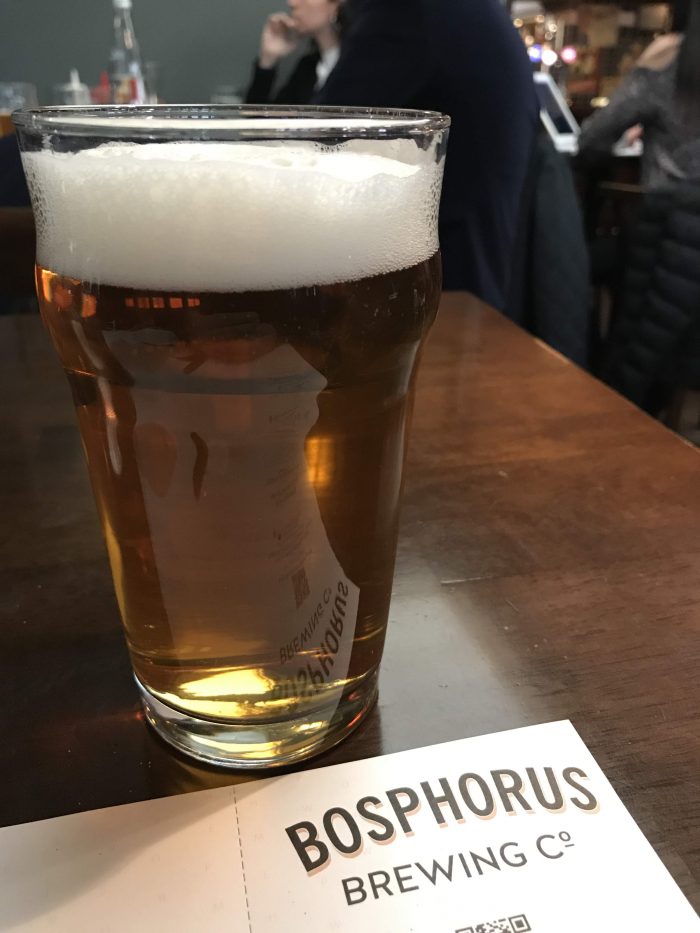 If you’re lucky, you can have one of Istanbul’s many cats join you for a date. 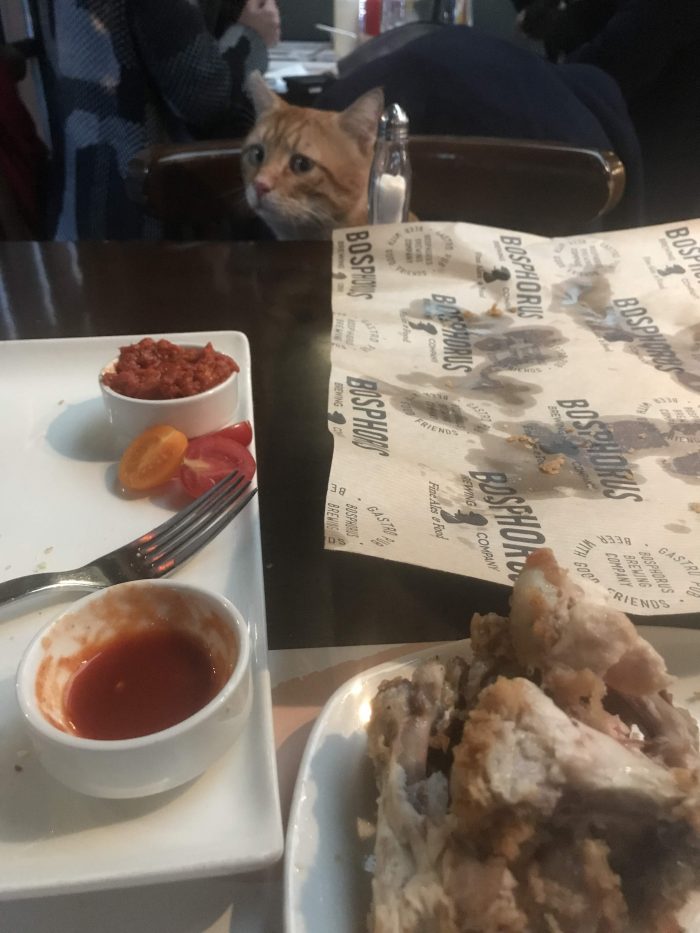 Craft Beer Lab is located in a trendy area of Beşiktaş. It was my favorite craft beer bar in Istanbul. 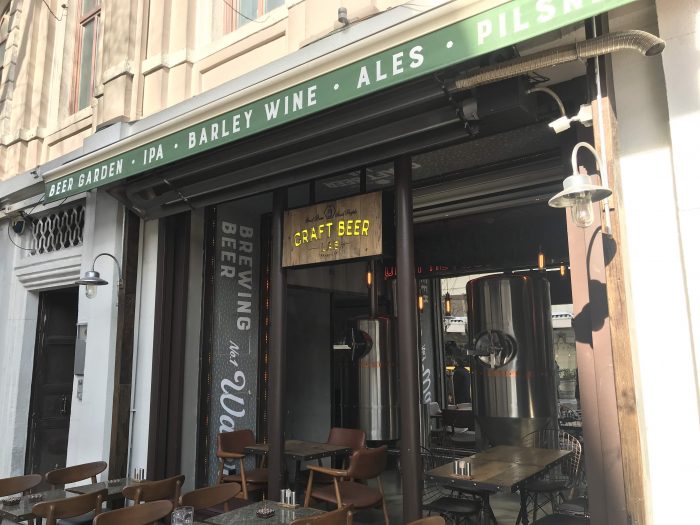 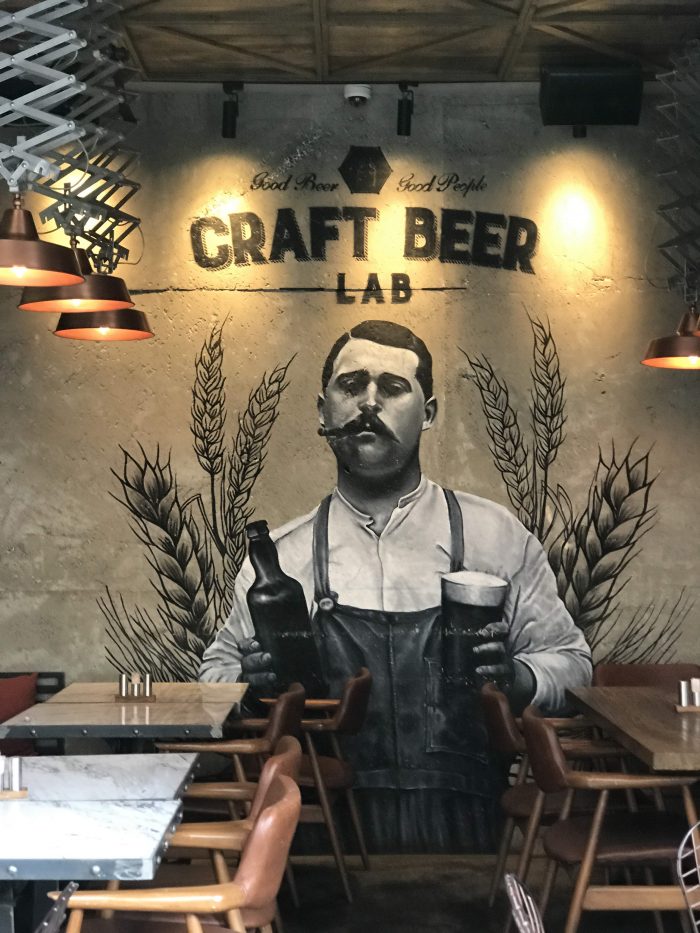 Not only does it have the largest selection of Turkish craft beers from Gara Guzu, Red Tower, & Pablo, there are also beers available from other international breweries such as Brewdog & Stone, plus some traditional German & Belgian beers. 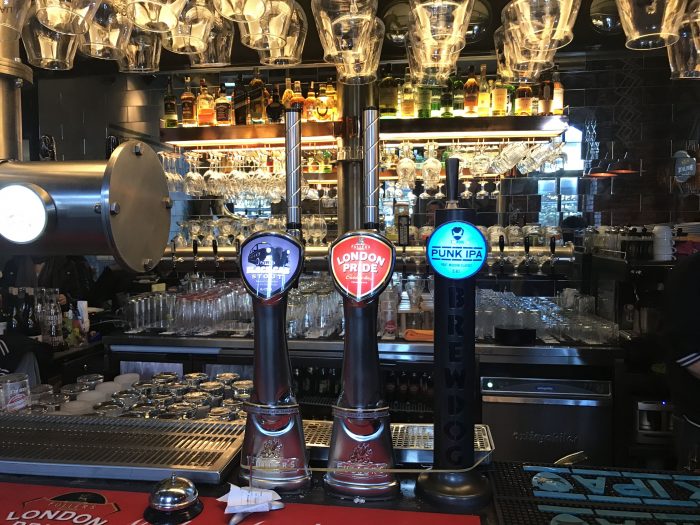 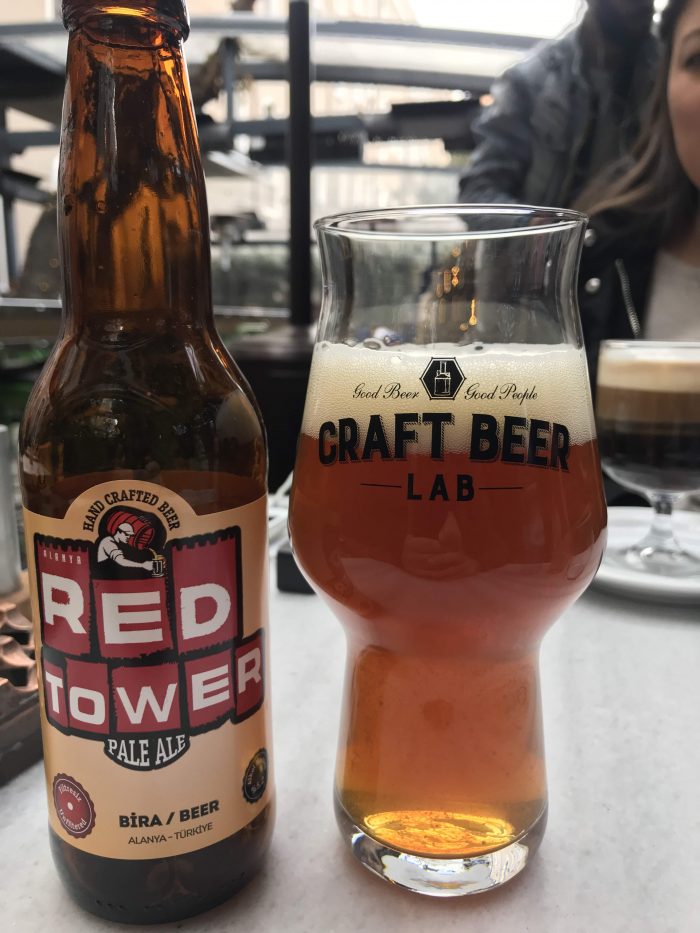 Based in Muğla, Gara Guzu is easily the biggest & best craft brewery in Turkey. If you spot their beers while out anywhere in the country, get one, because that’s probably the best beer you’re going to have for a while. Their 4C IPA isn’t just a great beer for Turkey, it stands up well to beer from other places as well. Here’s a good article about Gara Guzu.

In addition to having great beer, Craft Beer Lab is just a cool place to hang out. There are nice inside spaces, but assuming the weather is nice, you’ll want to hang out in the massive outdoor garden. You’ll never expect from the street that there’s this hidden oasis back here, but make sure you find it. 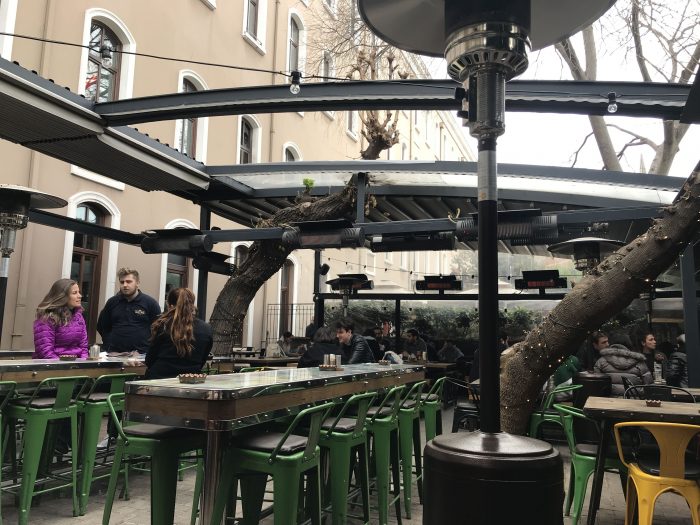 Ziba is a chill little bar located down a quiet alleyway, just of Istanbul’s bustling Istiklal. They have solid cocktails, a nice relaxed vibe, and a few bottles of beer from Gara Guzu & Pablo. Oh, and there are also a couple of cats that hang out inside. 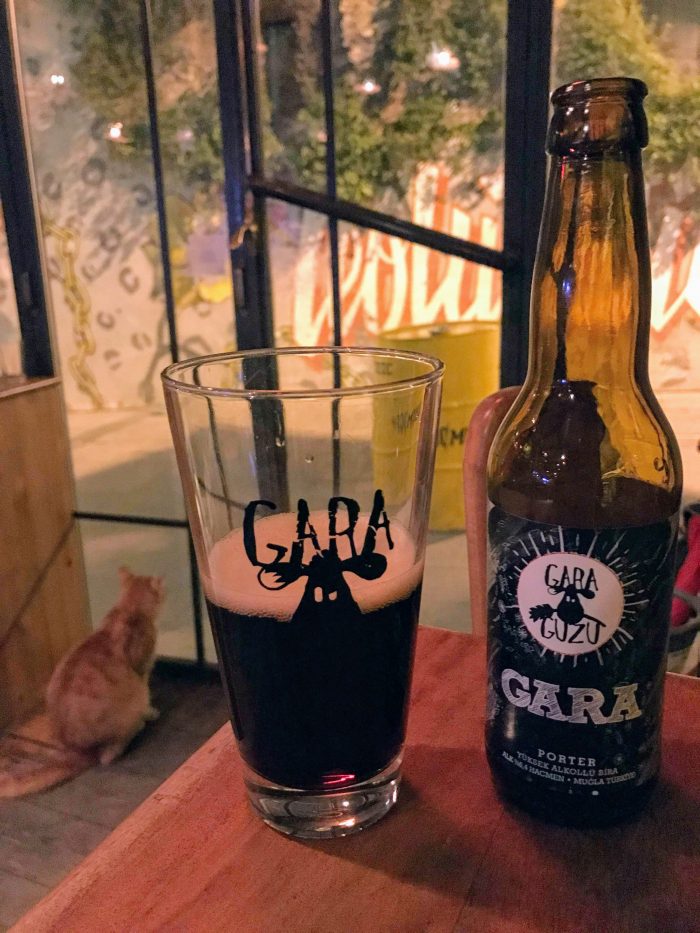 Bira Fabrikasi is the only place on this list that is located on the Asian side of Istanbul, in Kadiköy. 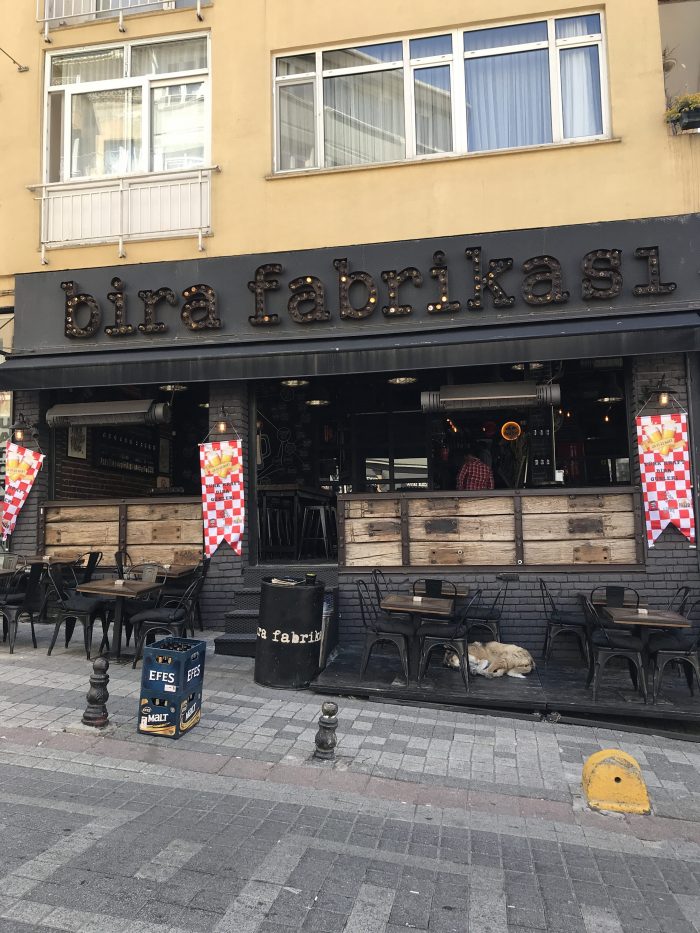 The bottle selection isn’t huge, but it’s the best in the area, with several Gara Guzu options available. 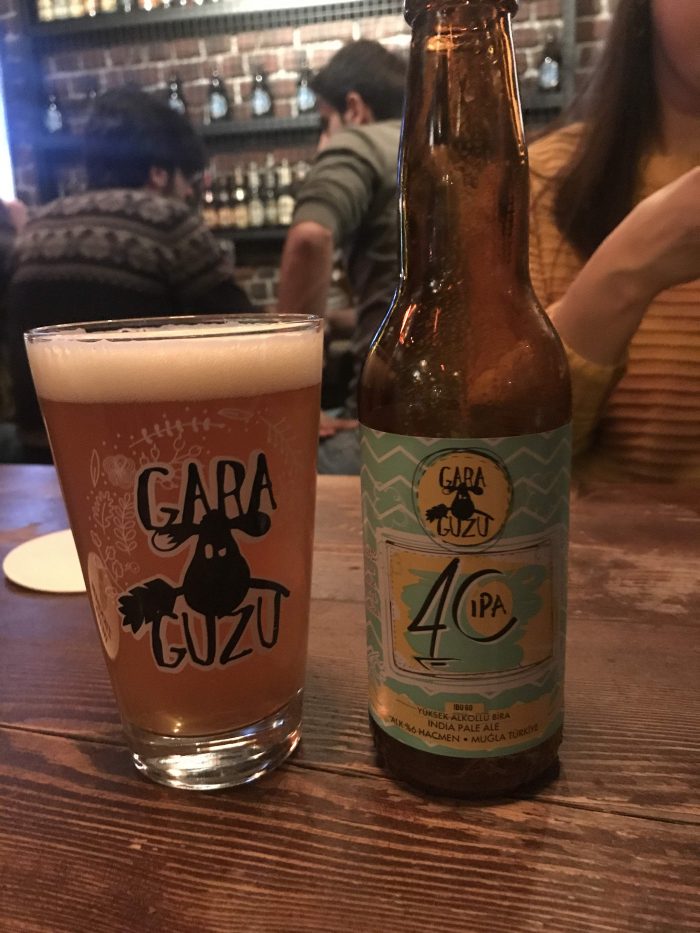 Yeah, the James Joyce is an Irish bar. But Irish bars can be depending on for a couple of things: decent beer and televised sports. I went in to watch an Arsenal match on TV, and was pleasantly surprised to find that they had several craft beers available, including Gara Guzu, Pablo, and Graf. There was also a fair amount of British & European beer available (including Guinness, of course), at least a bit more than other bars in Istanbul. 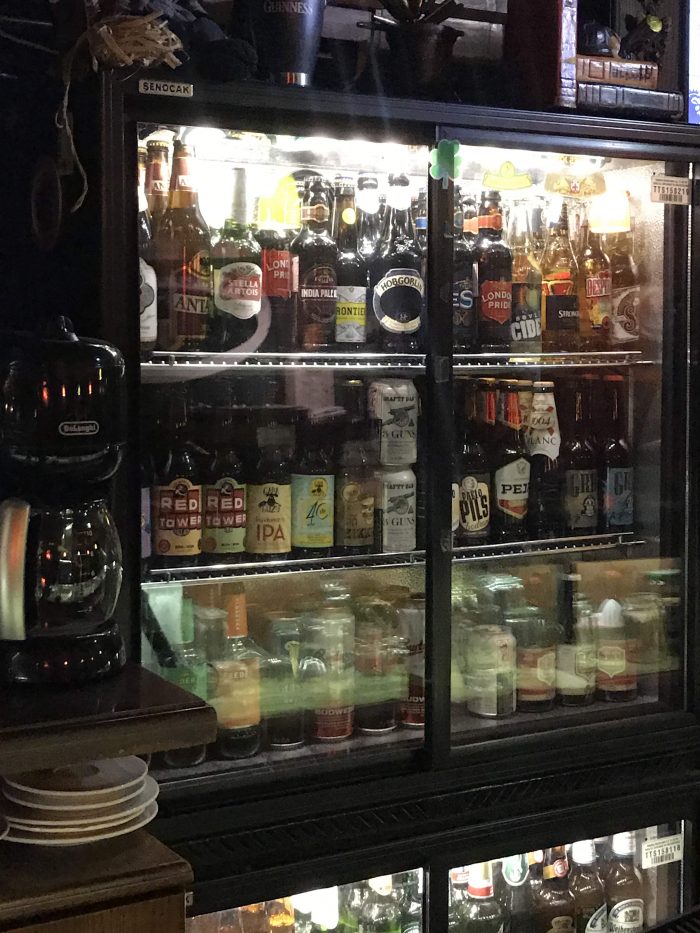 There are a few other bars & restaurants around Istanbul that also have small craft beer selections, including Beer Hall, Joker No. 19, Kozmonot, Taps Bebek, Thales Cafe Bar, and Varuna Gezgin. One thing I noticed is that bars tend to come and go pretty quickly in Istanbul. There are several beer bars that I had bookmarked to check out only a few months beforehand that were already gone. For example, I tried going to a couple of locations of the small local beer bar chain AYI, only to find the buildings empty. I imagine it must be tough to keep a bar running when prices are so volatile, but keep in mind that this list will likely change quickly.

There are 15 million people living in Istanbul. While only a small percentage of them may drink, this still leaves a market that is ripe for potential, if only given the opportunity. I fell in love with Turkish cuisine while I was there. There’s a wealth of unique flavors & dishes in Turkey. It’s impossible to not dream about the potential craft beers that could be inspired by this food.

Imagine a stout that tastes like baklava or Turkish delight. Or a beer that is reminiscent of thick Turkish coffee or beloved tea. On a basic level, simit would make for a nice base. Perhaps a honey & water buffalo clotted cream (bal & kaymak) ale would be delicious. Who am I kidding, I know it would be! When I was in Istanbul, I drank fresh orange & pomegranate juice nearly every day. How about a sour or IPA that uses these fruits? How about a beer that tastes like balik ekmek, the fish sandwiches served beneath Galata Bridge? Yeah, I may have taken this too far (though oyster stouts do exist… so… yeah, maybe not so crazy?).

My point is that Istanbul has so many delicious tastes that some enterprising brewery could utilize them to make the most unique beers in the world. In the meantime, you’ll have to make do with the places I’ve listed above if you’re looking for craft beer in Istanbul.

Have you spotted other great places in Istanbul for craft beer? Let me know in the comments! 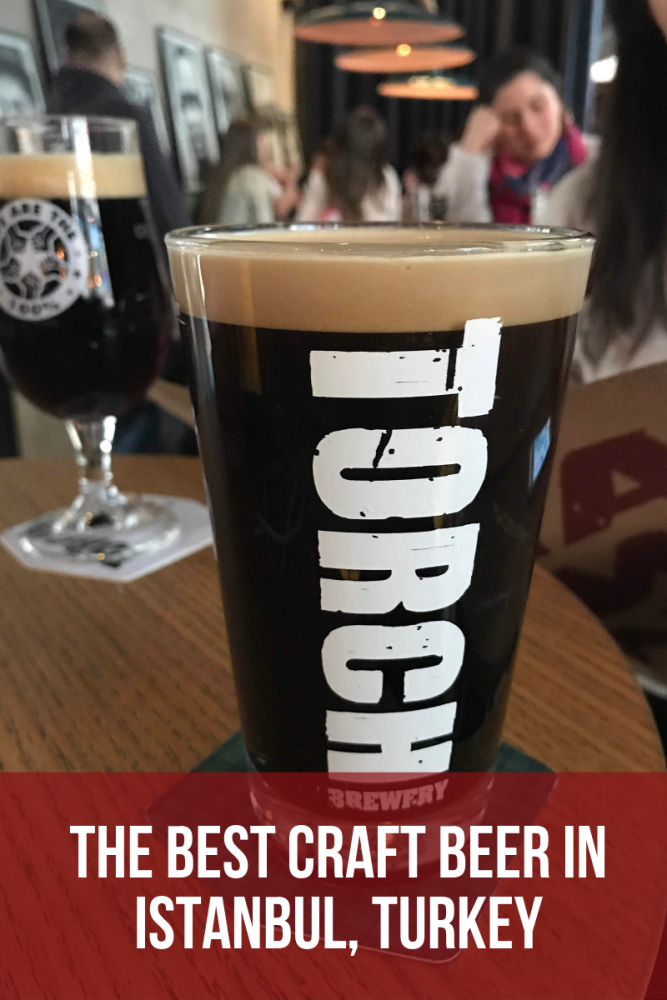