I could have stayed in central Sokcho for my visit to go hiking in Seoraksan National Park, but instead I decided to stay as close as possible to the park entrance at a place called Goodstay Smile Resort & Guesthouse

. Bus number 7 or 7-1 goes from the Intercity Bus Station out to this area of Sokcho. The ride takes about an hour if there is traffic and lots of stops, but otherwise it’s shorter. As the ride nears its end, you head into the valley that forms this northeastern entrance of Seoraksan National Park. 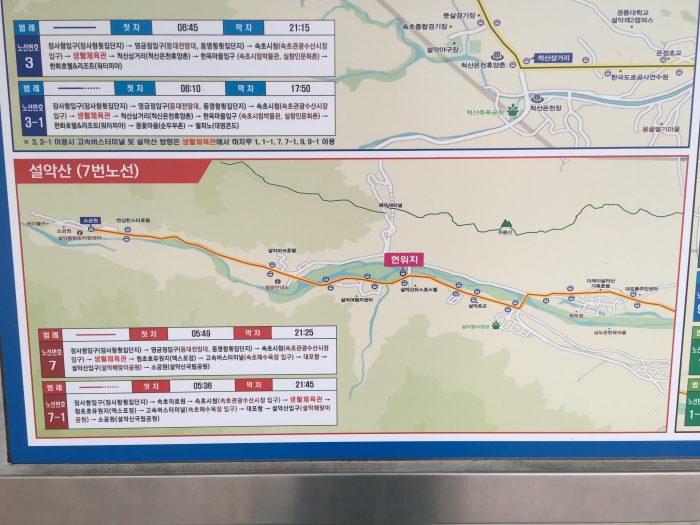 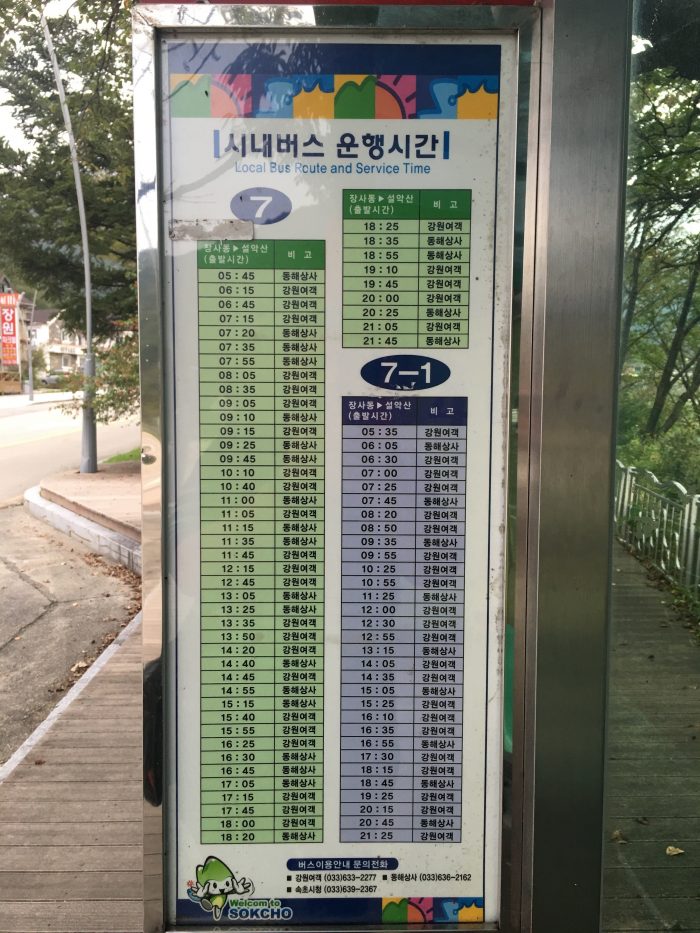 The Goodstay Smile Resort & Guesthouse was just off the main road, not far from where I had gotten off the bus. The bus stop can be found easily thanks to these unique chairs. 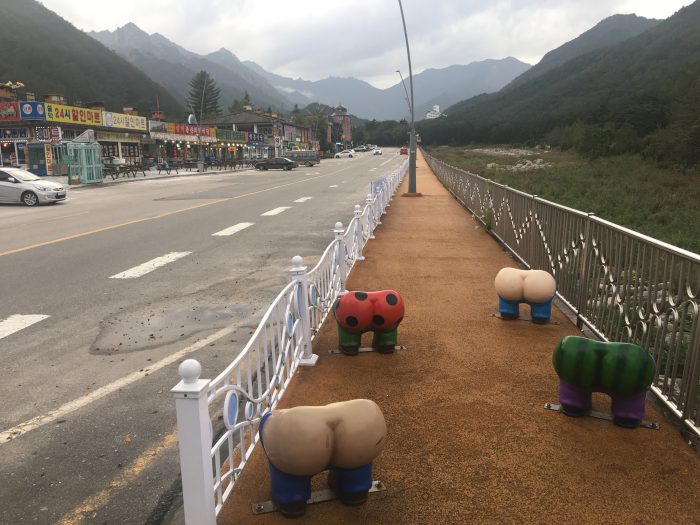 I arrived at the hotel, but nobody was there to check me in. Finally, after about 5 minutes, a woman arrived. She had just run out for some food, and needed to track down her son to check me in. Goodstay Smile Resort & Guesthouse is a little, family run operation, but it’s a nice property. 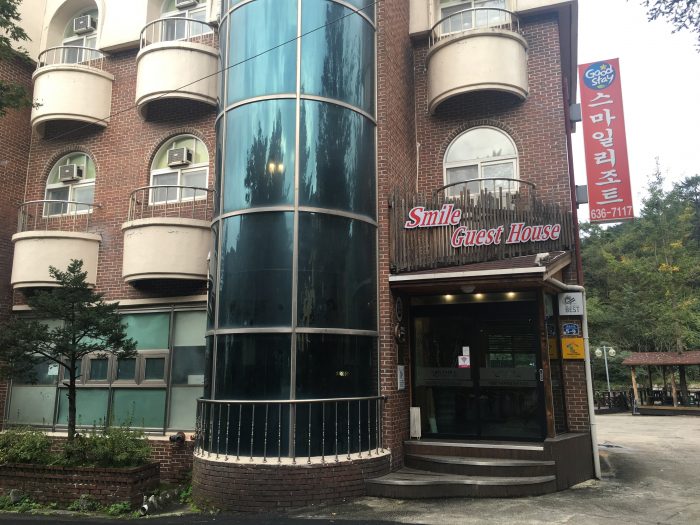 Along the river, there is a nice deck for enjoying the view of the mountains. 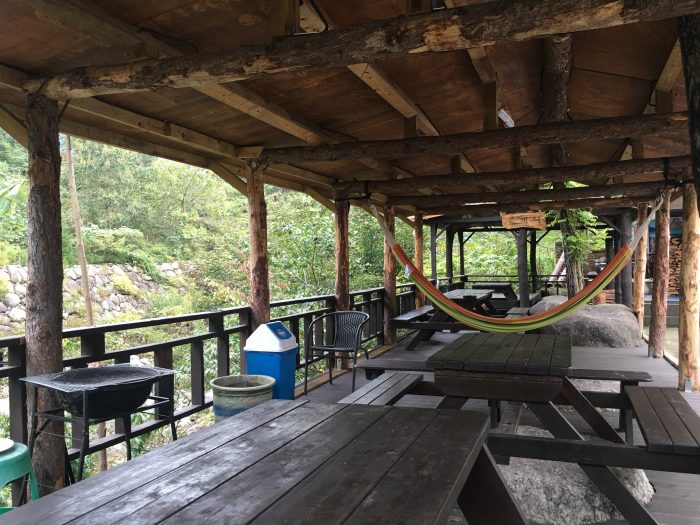 itself is not fancy, but the rooms are comfortable at a very reasonable price. It’s the perfect area to stay in if you’re visiting the Seoraksan National Park for a few days. 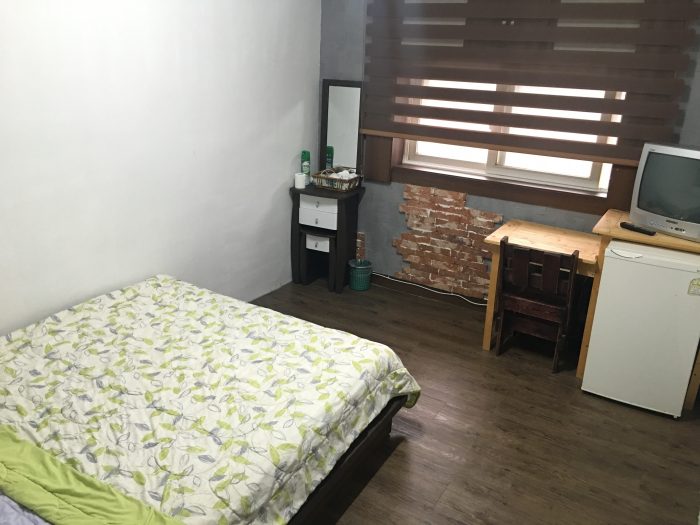 That said, not everyone thinks this. I arrived at Seoraksan in early October, which begins the peak visitor season. The changing autumn leaves bring in hundreds of thousands of visitors to the park. Yet this area is nearly a ghost town. There are several hotels that have shut down in the area. Yes, there is a bigger hotel closer to the entrance, and perhaps this led to other hotels closing, but that bigger hotel is much more expensive. Surely there must be some room in the market for cheaper overnight stays? As it is, it seems that most people who visit Seoraksan National Park don’t even stay in Sokcho, but visit as part of a day trip from Seoul. It’s a shame, as it’s an area that’s worth a much longer visit. 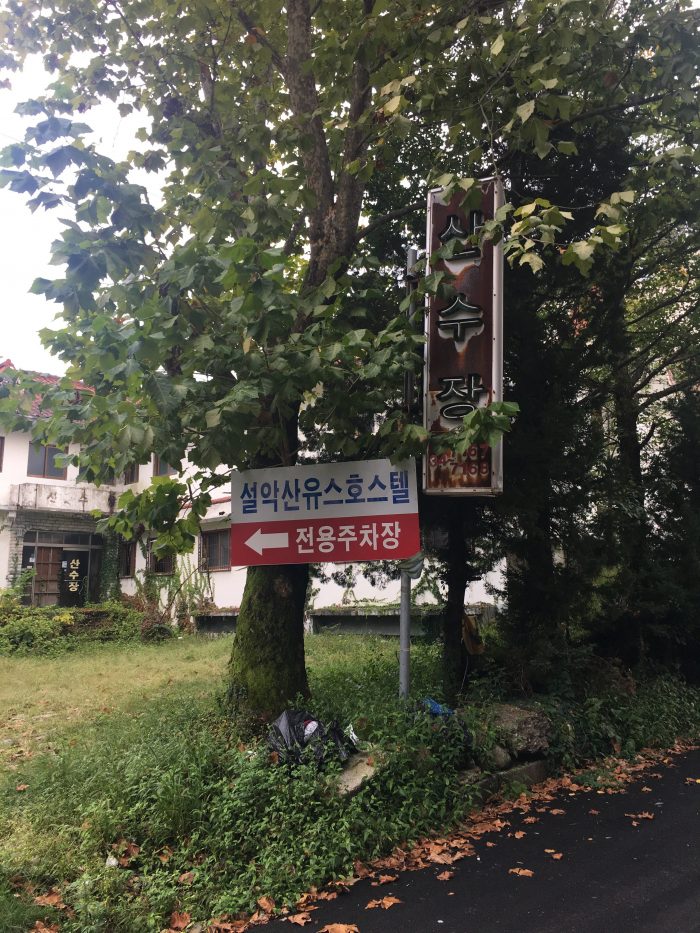 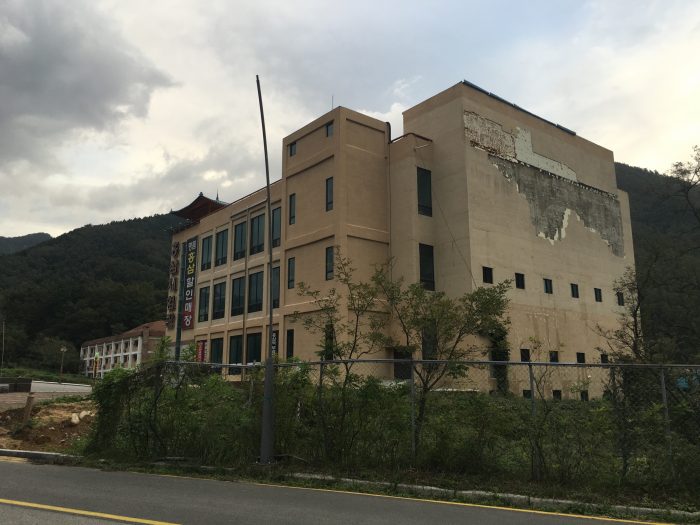 After having spent several hours on the bus from Busan to Sokcho, I wanted to stretch my legs, so I continued my walk past this area toward the entrance of Seoraksan. 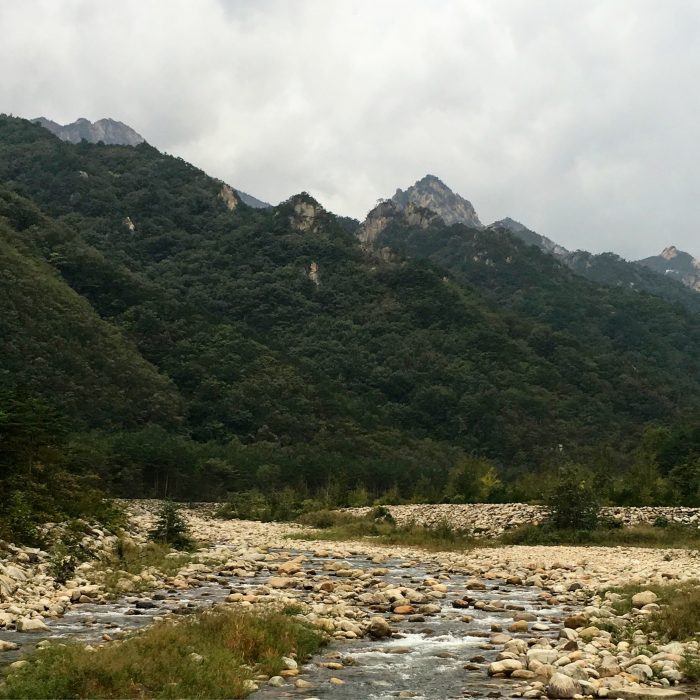 I made it to the visitor center, but it was closed. 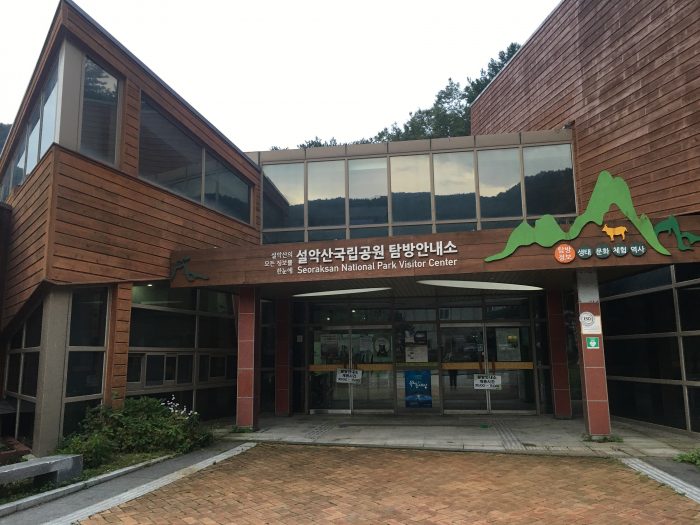 There were shops in this area as well, but instead I headed back toward my hotel, where there were a couple of local restaurants I had passed. The names are only in Korean, but there is a red one and a green one. Those are your dining options near Goodstay Smile or the few remaining hotels near the entrance of Seoraksan National Park. 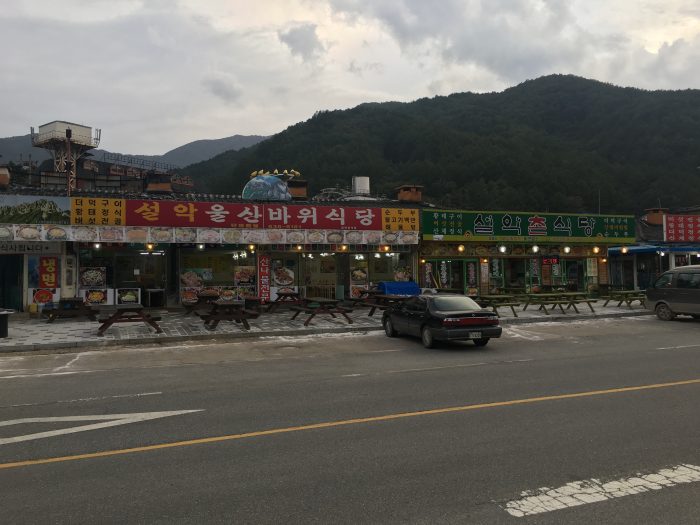 On my first night, I decided to go to the green restaurant. I ordered the potato pancake (gamja jeon) & some soju. Having plenty of familiarity with latkes & hashbrowns, I needed to see what a Korean take on a potato pancake would be.

The potatoes were more mashed rather than shredded, but my Korean potato pancake was pretty great. It was thin & mixed with carrots & sprouts, sort of like a fried mashed potato. Who can go wrong with that? 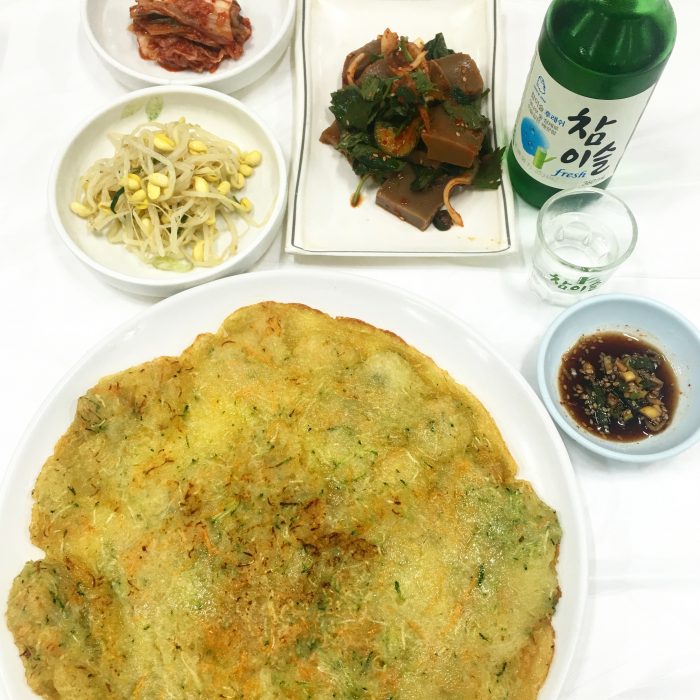 My gamja jeon also came with kimchi and this green gelatinous dish called Dotorimuk. Dotorimuk is a jelly made from acorn flour. Admittedly, it didn’t look particularly appetizing at first, but I gave it a shot, and it was actually pretty good.

My whole dinner with soju was just 13,000 won, and it ended up being one of the nicer meals I had in South Korea. Like the Goodstay Smile Resort & Guesthouse, the restaurant was also family run, with the kids helping serve & clear the table. Aside from a tour bus driver, I was the only customer the whole time I was there.

After dinner, it was starting to drizzle, so I picked up some beer & soju from the little shop next to the restaurants. There’s no nightlife here, so you’ll want something to take back to your hotel.

On my 2nd night in Sokcho, I had dinner at the other restaurant, the red one. This time I had a mixed rice dish that was covered in an omelette. 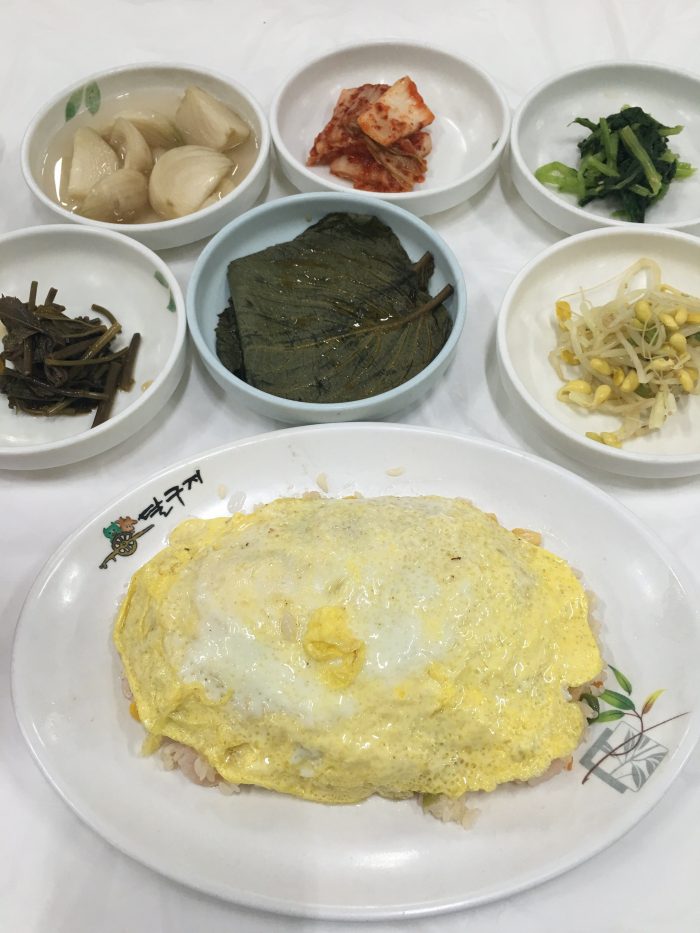 If you decide to stay at the edge of Sokcho near the Seoraksan National Park entrance, you’ll certainly save time getting to and from the park. You can also save some money by staying in the right hotels. However, if you’re looking for more food options or some nightlife, you won’t find much of that here.