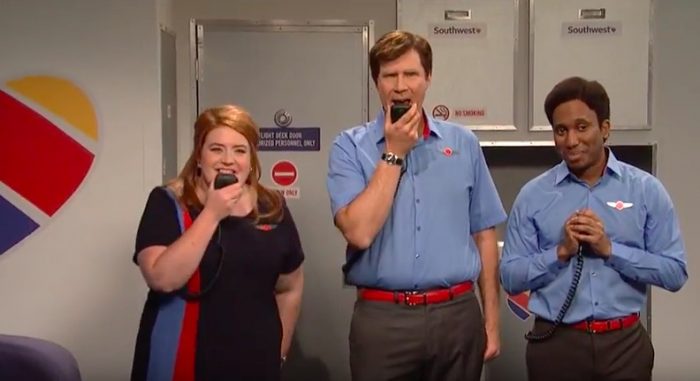 Will Ferrell made his return to Saturday Night Live tonight, and as usual when he’s on the show, everything he did was pretty great.

One of the highlights of tonight’s SNL was a sketch making fun of Southwest Airlines & their overly-positive flight attendants who always try to be entertaining. As the other two flight attendants Spencer (Chris Redd) and Sabrina (Aidy Bryant) have fun using a rap for the safety demonstration, Will Ferrell’s character Gareth takes things in a different, much darker direction.

On one hand, it’s great that Southwest’s flight attendants have fun with their jobs and try to make flights entertaining. But sometimes it’s a bit much, even for cheerful people.

Every now and then, some of them surely must feel like poor Gareth, alone in the cosmos.

As an aside, we need the folks at SNL to start designing some aircraft cabins. Their sets for airplane sketches always seem a hell of a lot more comfortable than what real passengers actually experience. I’d gladly take a “When I say, ‘death is…’ you say, ‘final!'” call-and-response if it meant having that much legroom on a flight.