The Portuguese love a good sandwich, just like any sensible person. Portugal has not one but two sandwiches that are considered national sandwiches: The bifana and the prego. Both are straightforward sandwiches made with tender, thin pieces of meat. The bifana is made with pork, while the prego is made with beef. They are served on fresh bread that’s soft, with a bit of a floured crust that holds the juices in.

Bifanas are perhaps Portugal’s most popular sandwich. They are as ubiquitous as the hamburger is in the United States. McDonalds even sells the McBifana in Portugal. The key ingredient of the bifana is pork. It can be a pork cutlet or strips of pork, but meat is the heart of the sandwich. The pork in the bifana is marinated with some amount of spicy sauce, but this varies by region. Bifanas can be found all over Portugal. In Northern Portugal, expect the bifana to have a spicier sauce than in the South. It may or may not be topped with onions & peppers.

My first bifana experience was at O Trevo in Lisbon. In this case, the bifana was a simple sandwich of thinly pressed meat with garlic, mustard and a bit of spicy oil. Pair it with a cold beer, and you’ve got yourself a nice snack. 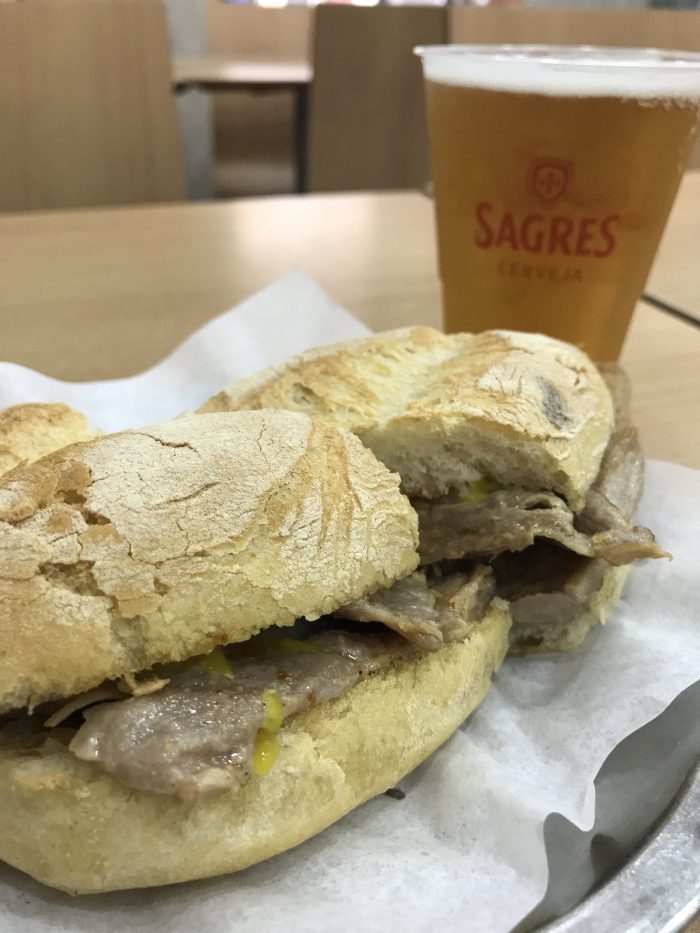 I also had a bifana from a food truck at a craft beer festival in Cascais. Again, these go great with beer. 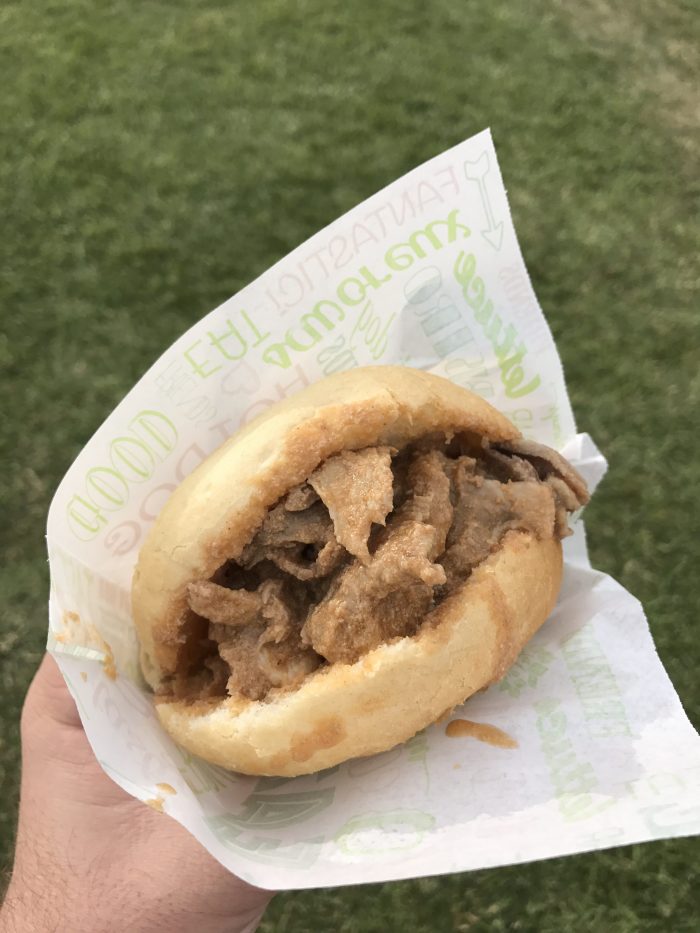 The prego is similar to the bifana, but it’s made with beef rather than pork. Again, meat is pounded thinly, then cooked with garlic.

I first had a prego at Pregaria in Guimarães in Northern Portugal. Their sandwiches are a bit more creative than the traditional prego, but they are still delicious steak sandwiches.

I ordered the prego called the “broca”: Steak stuffed with artesian cow cheese with oregano, bacon, arugula, and mayo with caramelized onion & garlic. 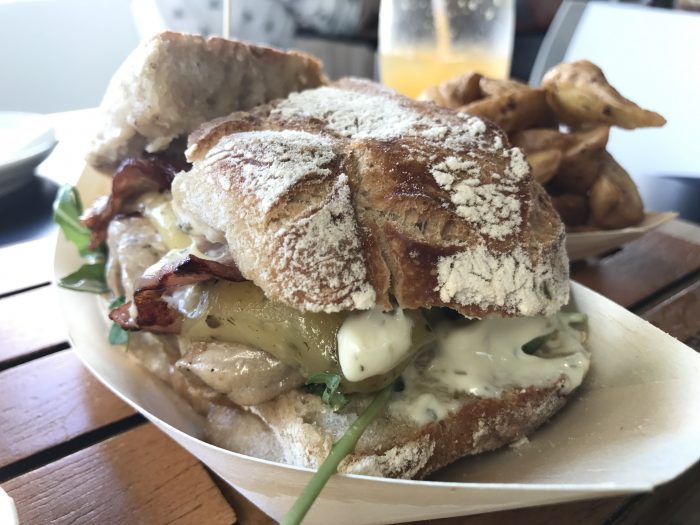 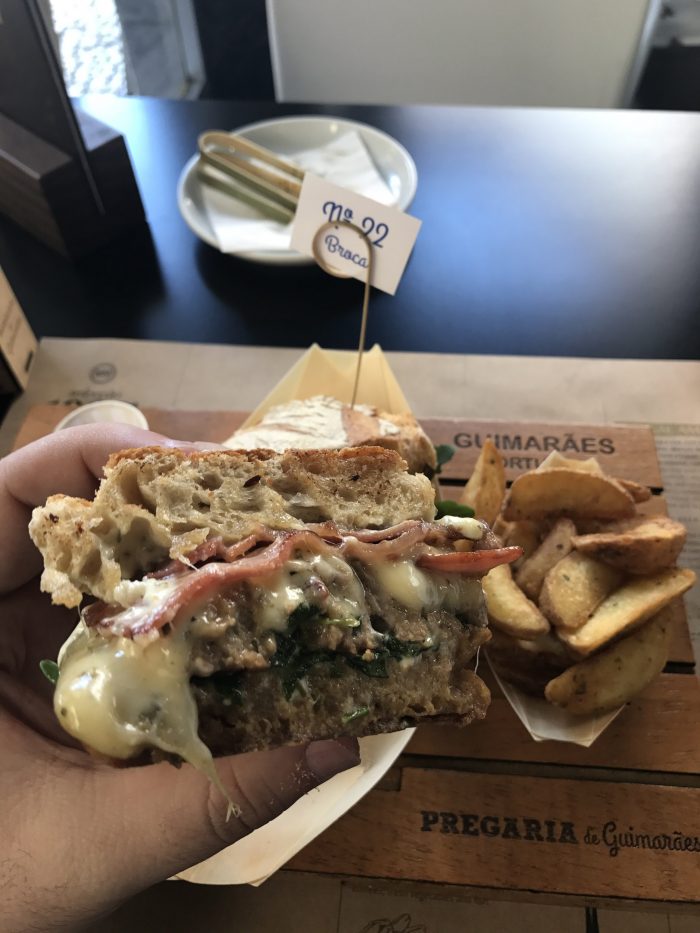 As if these two delicious sandwiches aren’t enough, Portugal (and Porto in particular) is also known for the indulgent Francesinha sandwich, a fantastic creation that consists of far too many layers of meat, cheese, and sauce.

Trying local cuisine is one of the best parts of traveling. While visitors will have had pork & beef sandwiches prior to visiting Portugal, the bifana & prego are special local takes on a simple sandwich. You will find plenty of opportunities to try the delicious bifana & prego in Portugal, don’t pass them up thinking they are just some average sandwich. 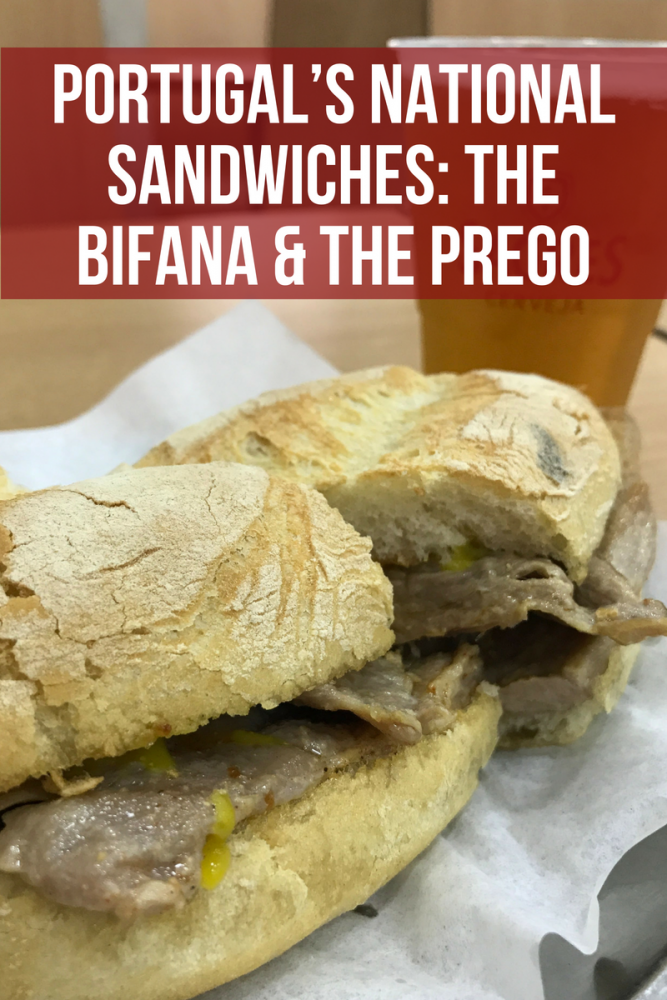