After traveling all the way around the Pacific Rim from San Francisco to Los Angeles to Hong Kong to Kuala Lumpur to New Zealand and back via Osaka, it was time for the last part of my trip back to the United States, flying from Osaka to Los Angeles on Japan Airlines in business class on a Boeing 787. 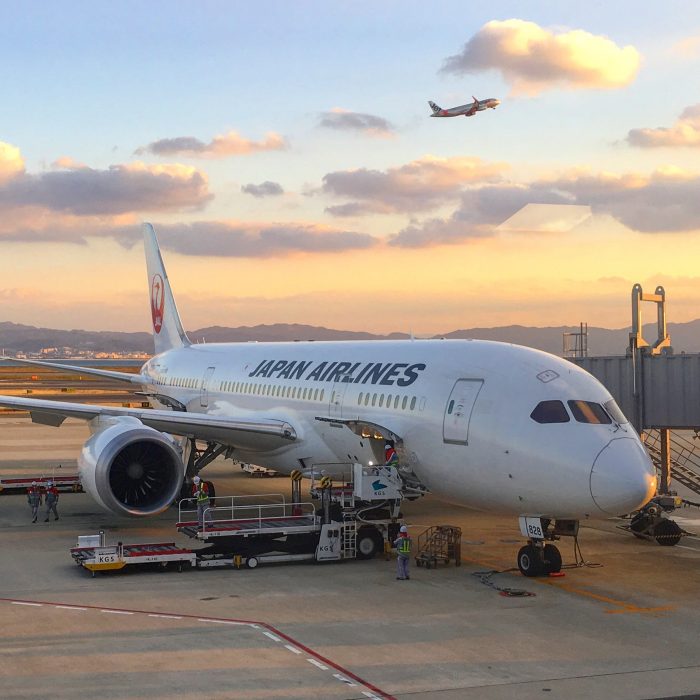 Following my layover in Osaka, I checked in to the flight at Osaka Kansai through the business class check-in lane, where I was then given a fast lane pass through security. Nobody else was there, so it was essentially a private security lane. Since there had been no wait to check in, and my train journey had been faster than I had expected, I was at the airport a good 2.5 hours before the flight. I took the train out to the wing of the terminal where the gate and lounge were, and I hung out in the Japan Airlines Sakura Lounge until it was time for my flight.

It was my first time flying on a Boeing 787, and I was excited, given all that I had heard about the experience. Between the large windows & the more comfortable cabin, I was really looking forward to my flight. 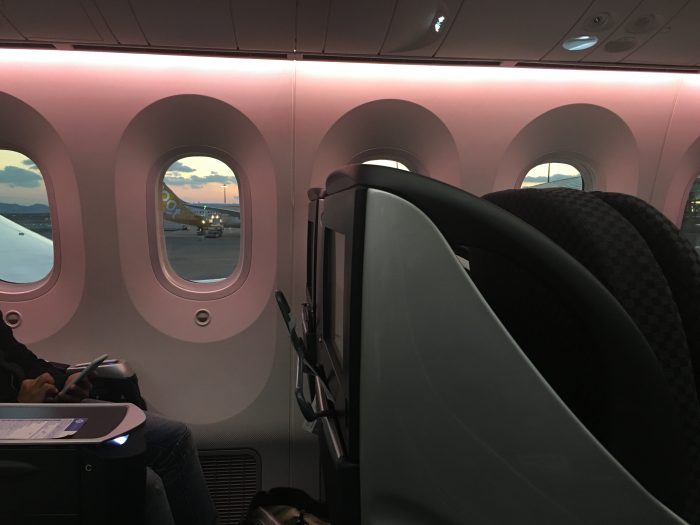 Of course, JAL’s business class cabin on the Boeing 787 could be better. The cabin is in a 2-2-2 configuration. There is no first class cabin on the plane. I took a middle seat (9D) so nobody would be climbing over me, though a few of the people at the window seats got lucky and had nobody sitting next to them. 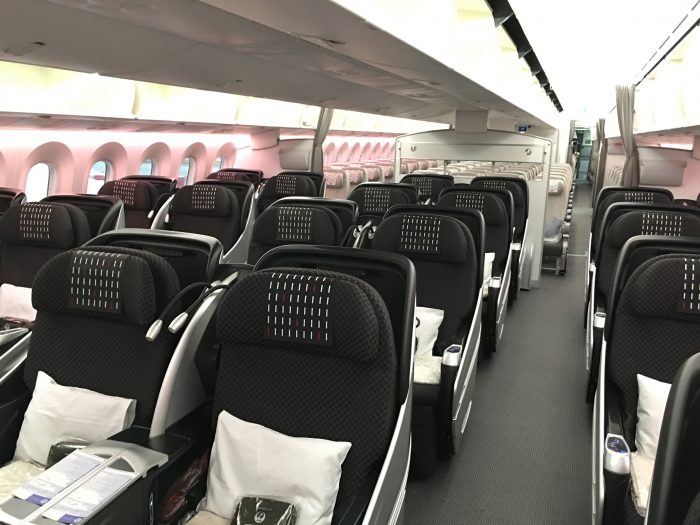 The seat, which is called the JAL Shell Flat Neo, sounds fancy, but it’s still only an angled lie-flat seat. Given how impressive the Boeing 787 is, it should have a more impressive seat. Japan Airlines should do much better, and they are, gradually, but it’s disappointing that they ever introduced this seat on the 787 in the first place. That said, for the type of seat it is, it’s actually nice enough, aside from a couple of issues. 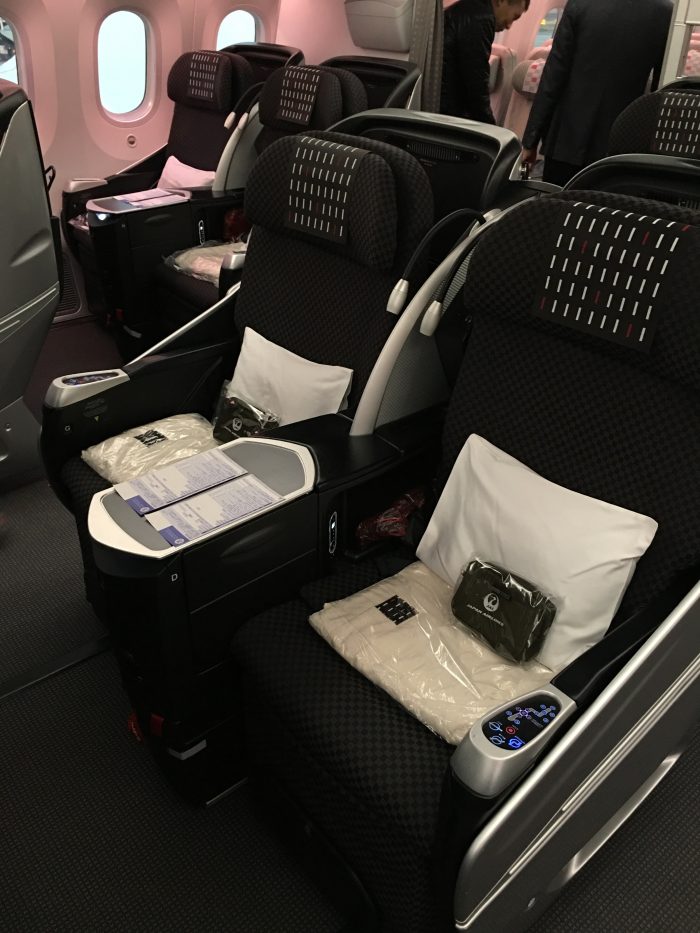 First off, it’s well-padded, and the chair has a nice massage function. There’s tons of storage as well, at least for this type of seat. The middle divider unfortunately does not move or raise for added privacy, so hopefully your seatmate isn’t too distracting. 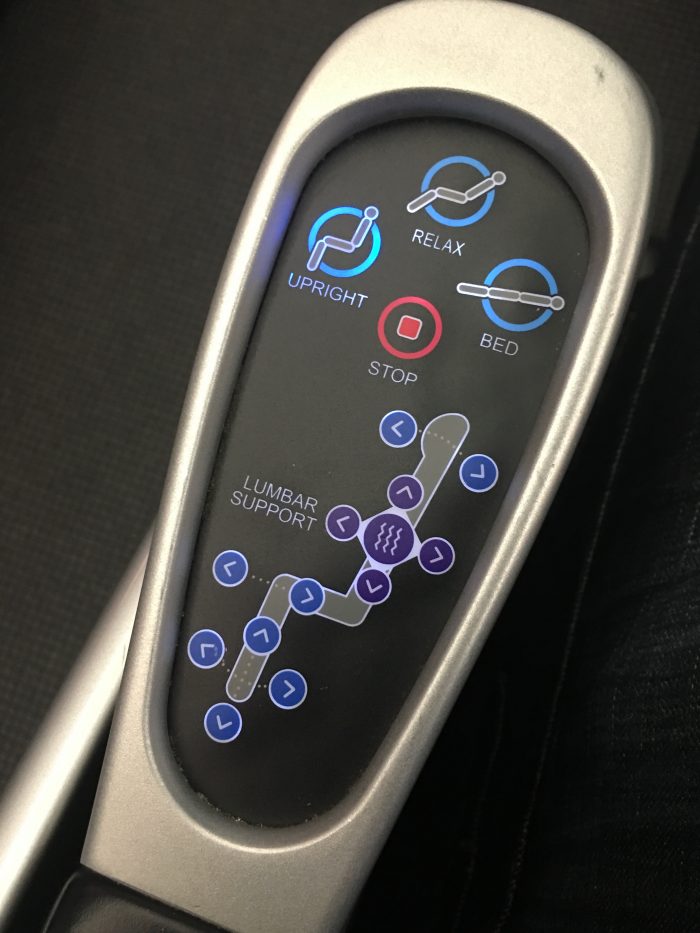 There was comfortable bedding waiting at the seat, along with a Zero Haliburton amenity kit. The kit contents were pretty basic, with nothing really worth taking with me. There were also Sony noise-cancelling headphones, which are good quality, though they were on-ear rather than over-ear, so they weren’t as comfortable as American’s Bose headphones. Unlike American, Japan Airlines lets you hang onto the headphones for the entire flight rather than collecting them an hour before landing. 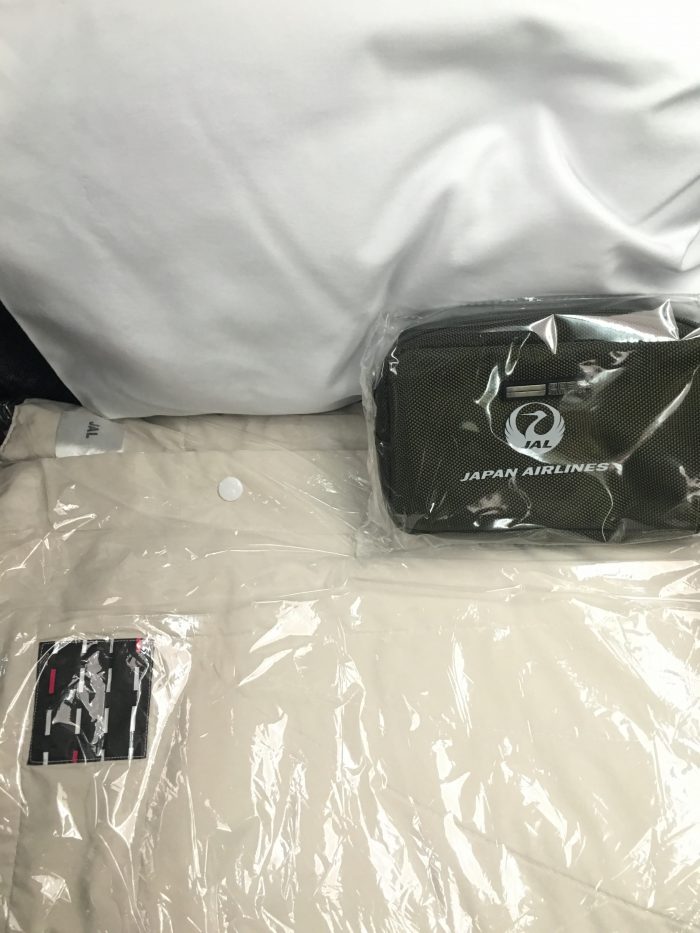 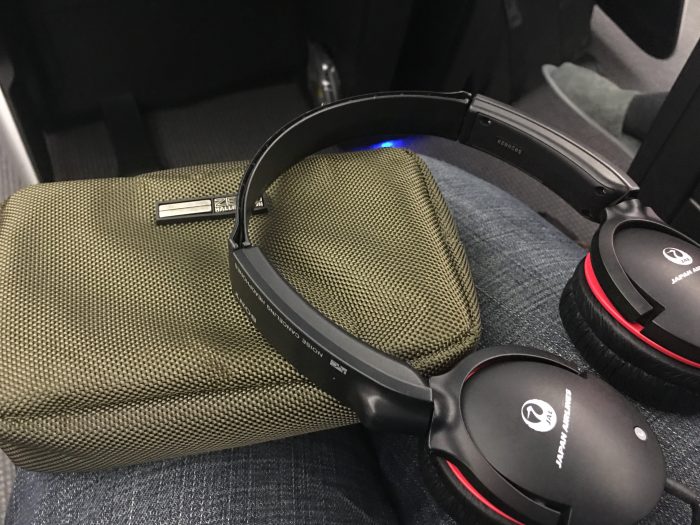 The inflight entertainment video screen was huge with a great resolution, though it was in a fixed position. The touch screen was less functional than I would have liked. At times I had to repeatedly press it, which led to me switching The Martian to German when all I was trying to do was turn off the subtitles. During the flight I watched that and Black Mass. Later on, I had planned to watch some TV, but the TV show selection was weak, so I watched what I could of Die Hard instead, which seemed semi-appropriate for a flight from Japan to Los Angeles around the holidays. 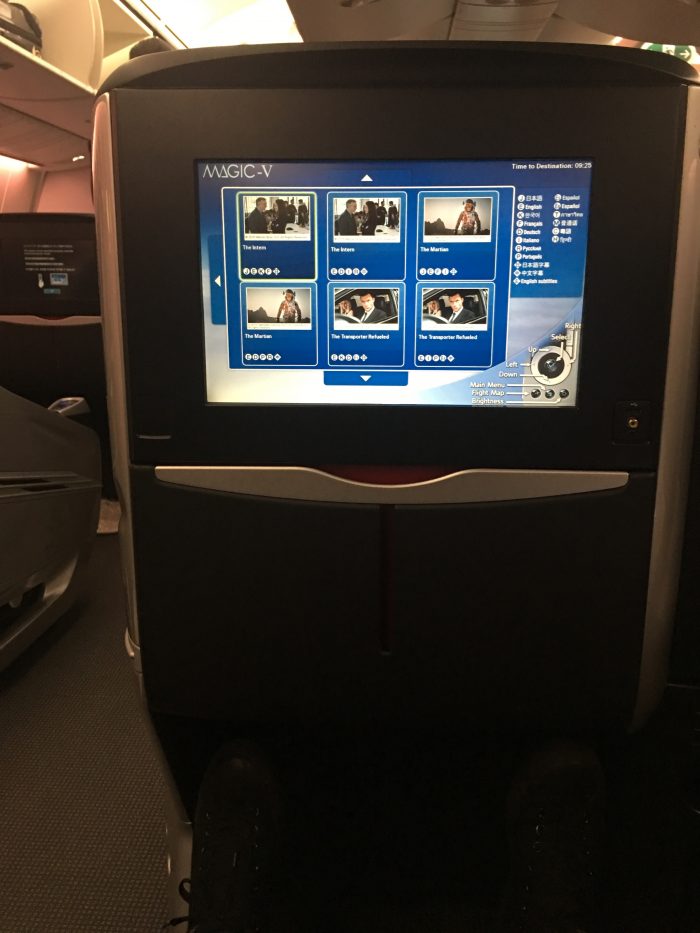 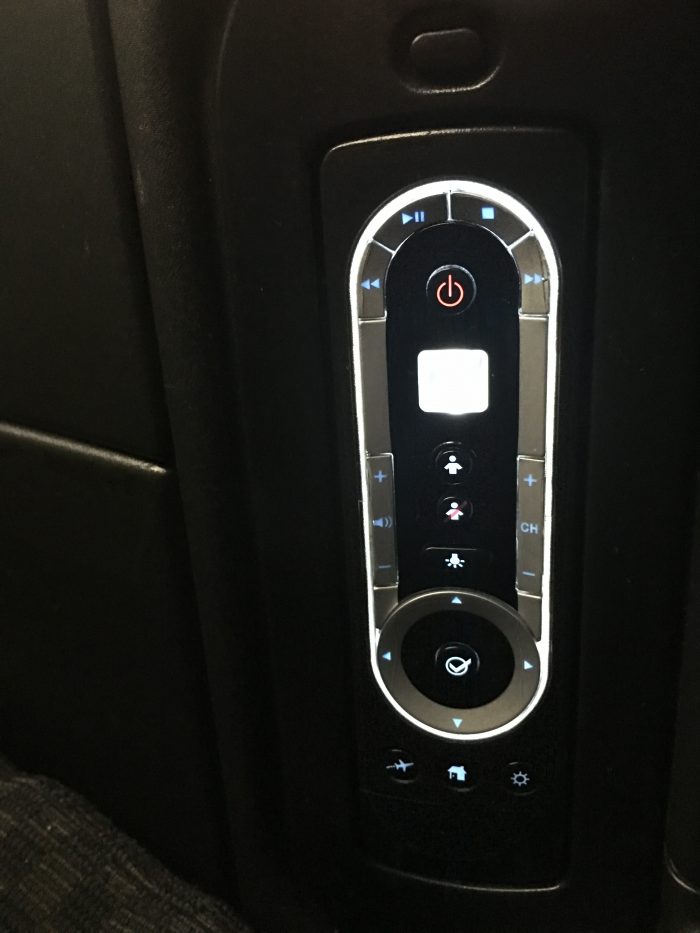 As for the flight itself, it was about 9.5 hours. It was a very comfortable flight with zero turbulence aside from a tiny bit near the end. I only realized that there was no pre-departure drink when the flight attendants came around with champagne and orange juice 30 minutes into the flight. They did bring water bottles around pre-flight, however.

Here are the JAL business class menus from the flight: 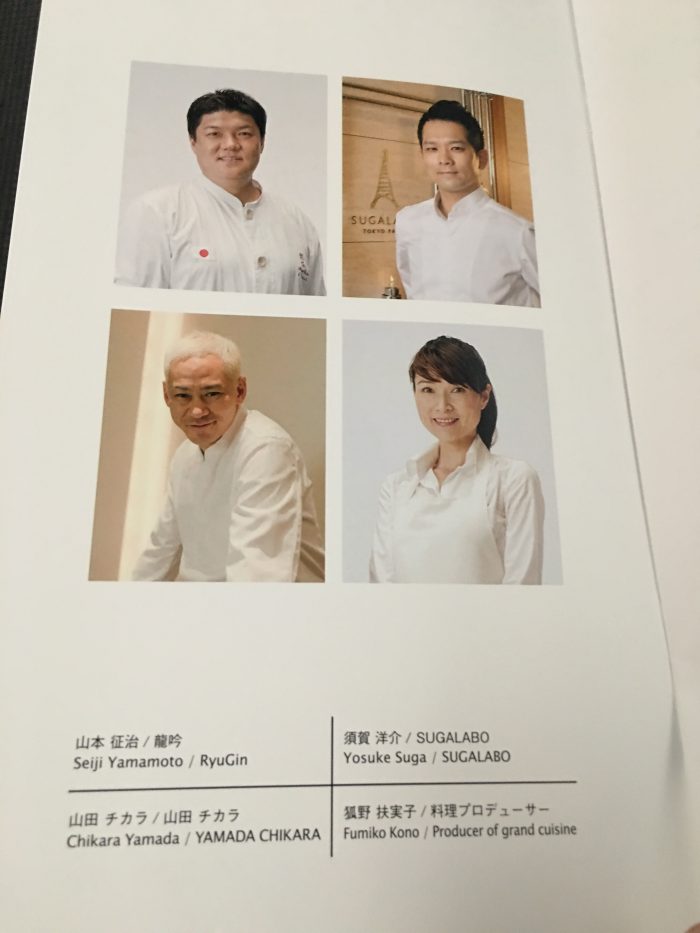 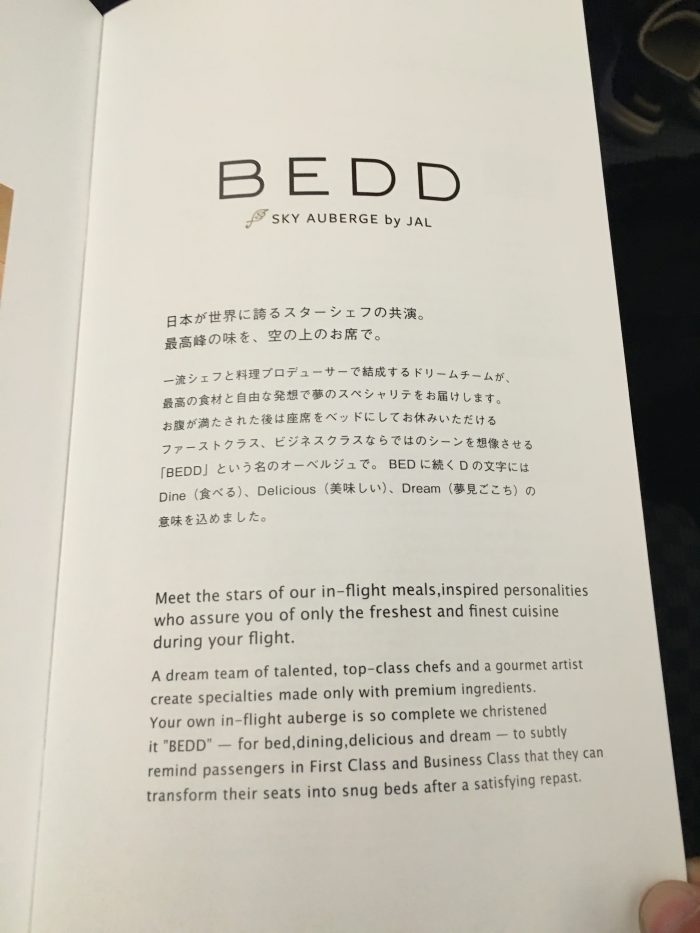 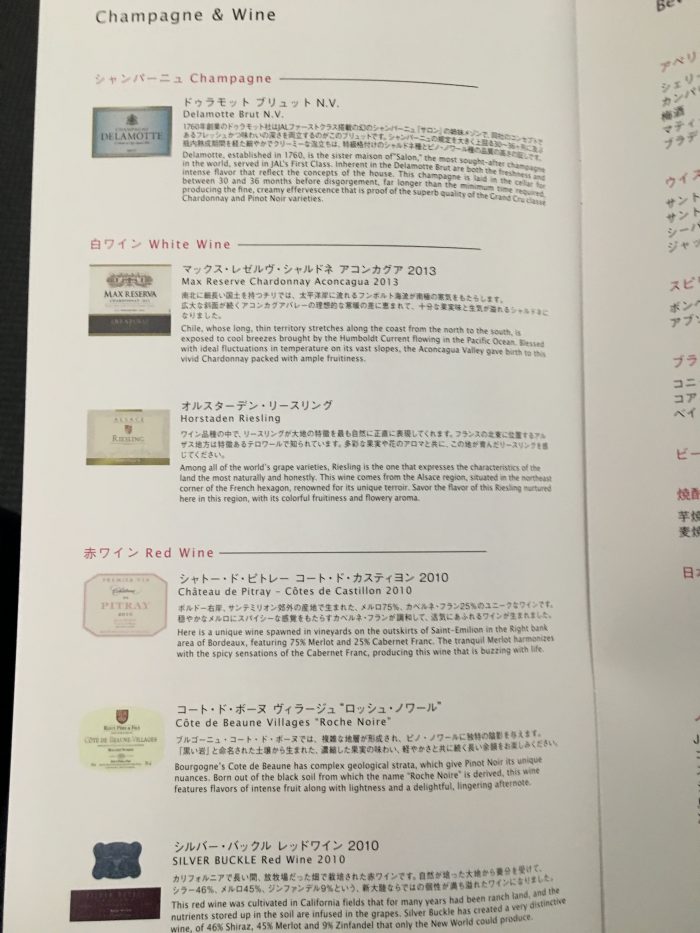 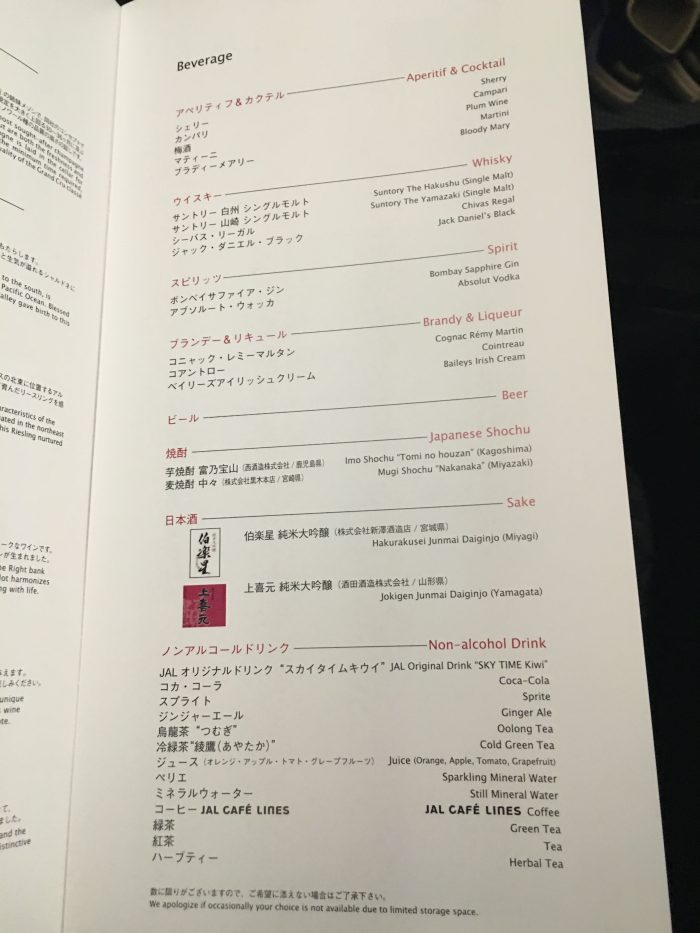 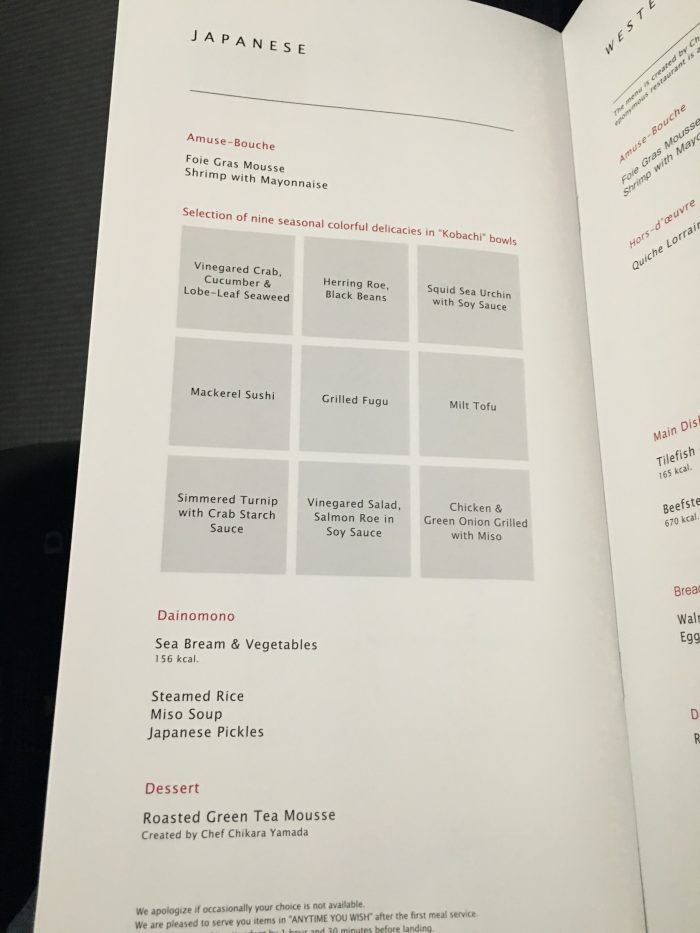 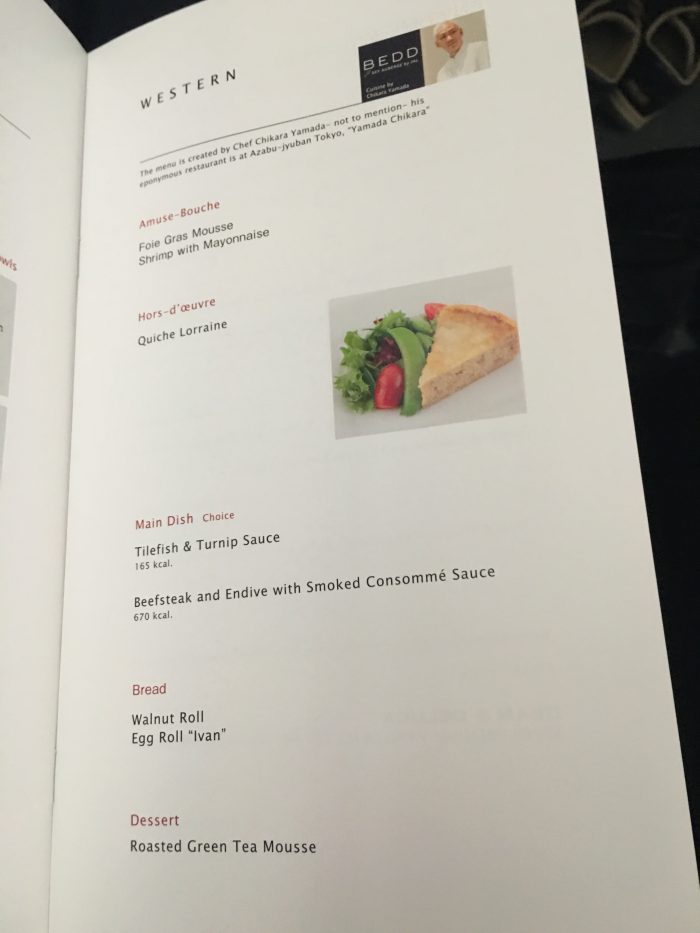 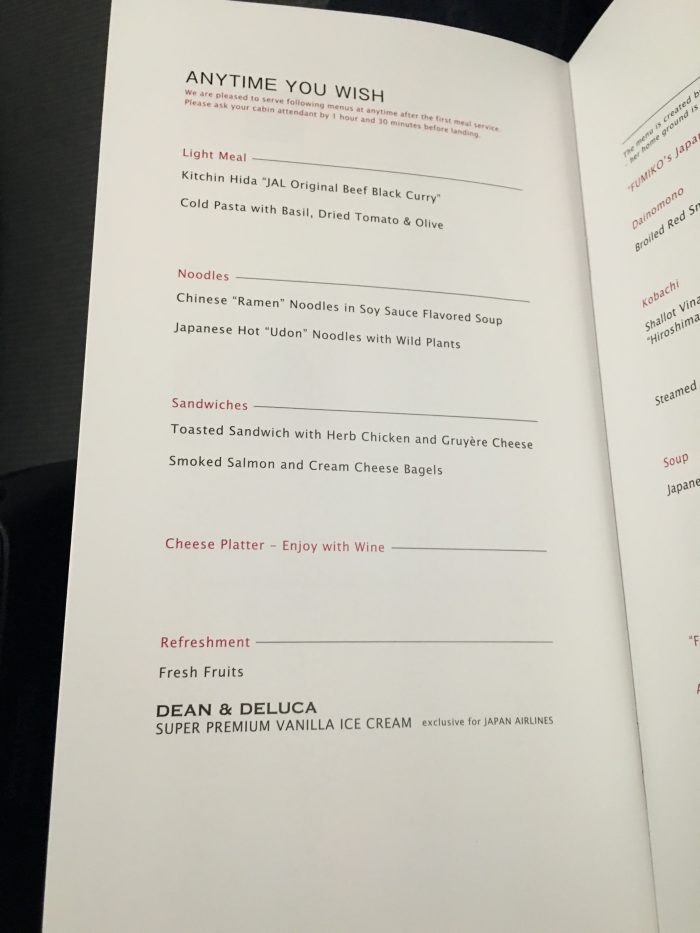 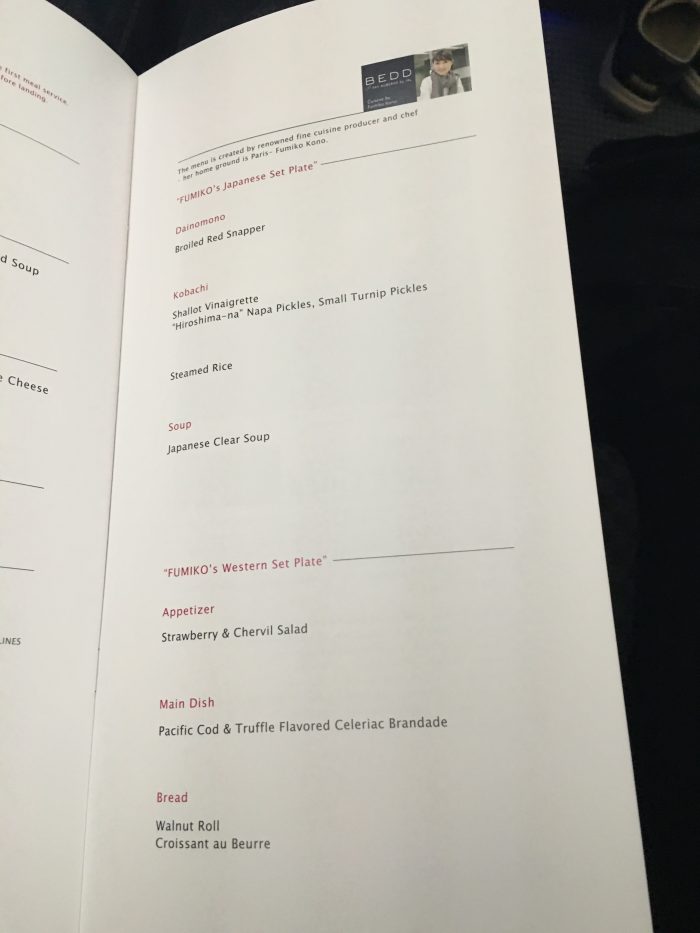 Since I’d had great sushi earlier in the day, I decided to go with the Western menu. I also was impressed, though not shocked, that they had a nice selection of two Japanese whiskys, Hashuku & Yamazaki, so I had to have some. They also had a selection of shochu & sake.

I started the meal off with Hashuku. The amuse bouche was delicious, especially the foie gras. That’s a pretty fancy dish for business class. 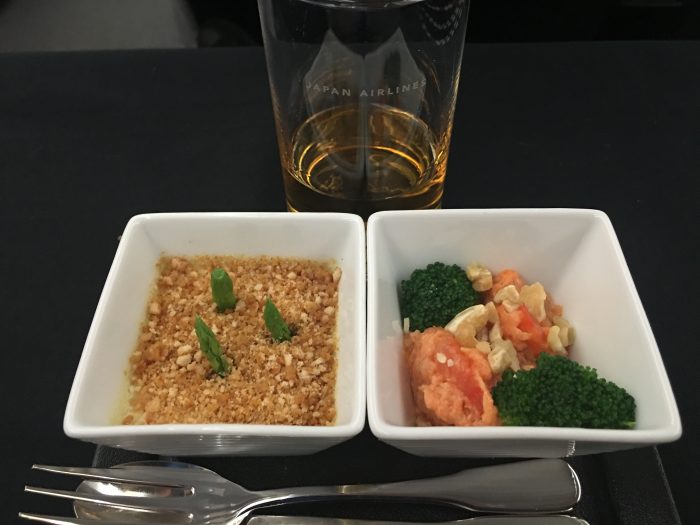 The quiche was excellent as well. 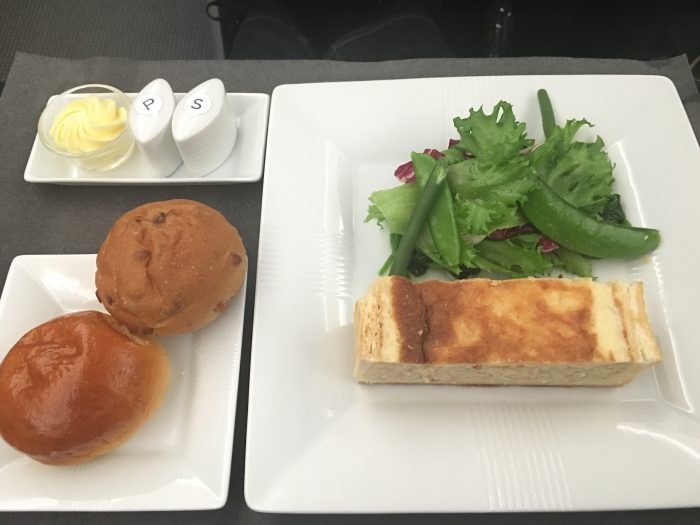 Then I had the steak & Yamazaki. The steak was prepared well. Throughout the meal, I was given huge pours of whisky. I could have had even more had I wanted to, as I seemed to be the only passenger drinking it. It’s hard to have a better airline meal than steak & whisky. 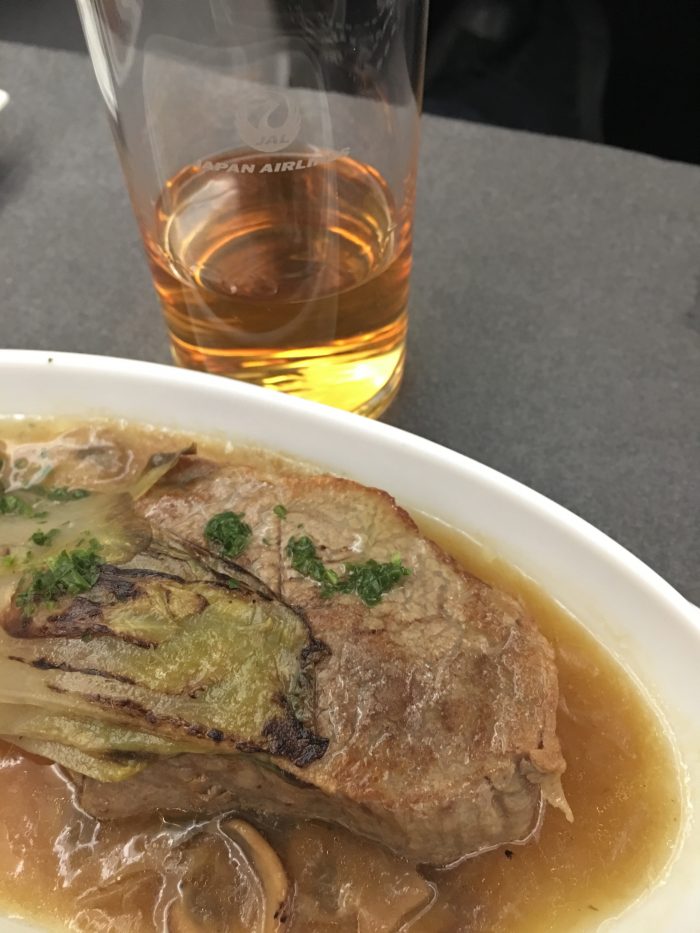 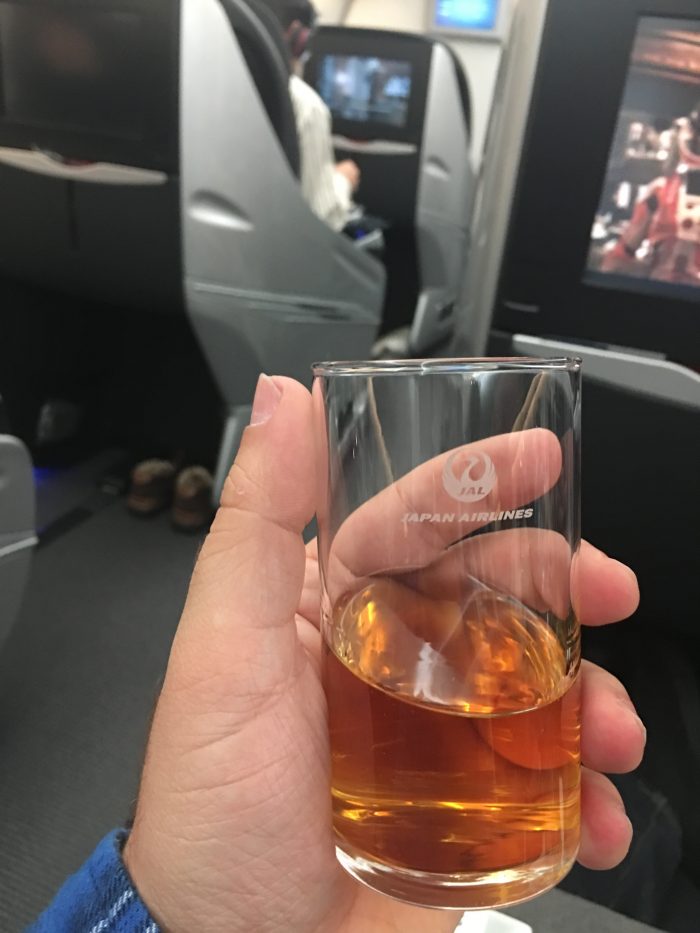 The meal was finished off with roasted green tea mousse & more whisky. 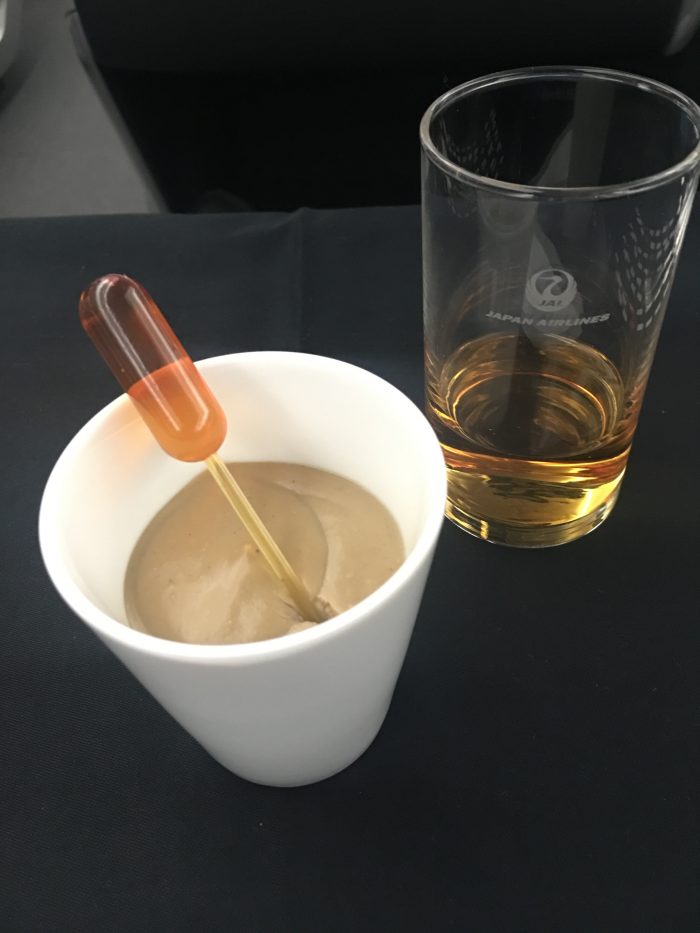 It was the best business class meal I’ve ever had. It rivals that of some first class meals I’ve had in the past. Although the meal service ended a good 2.5 hours into the flight, it hadn’t seemed slow, and the flight attendants were attentive & friendly. Since it was a 5:30pm departure, I didn’t have much of a desire to sleep immediately anyway.

Once I did set up my seat in lie-flat mode for sleeping, I slept for a good 3-4 hours. Like the Malaysia Airlines business class seat, the Japan Airlines seat on the Boeing 787 is lie-flat, but angled, though I don’t mind the angle so much. 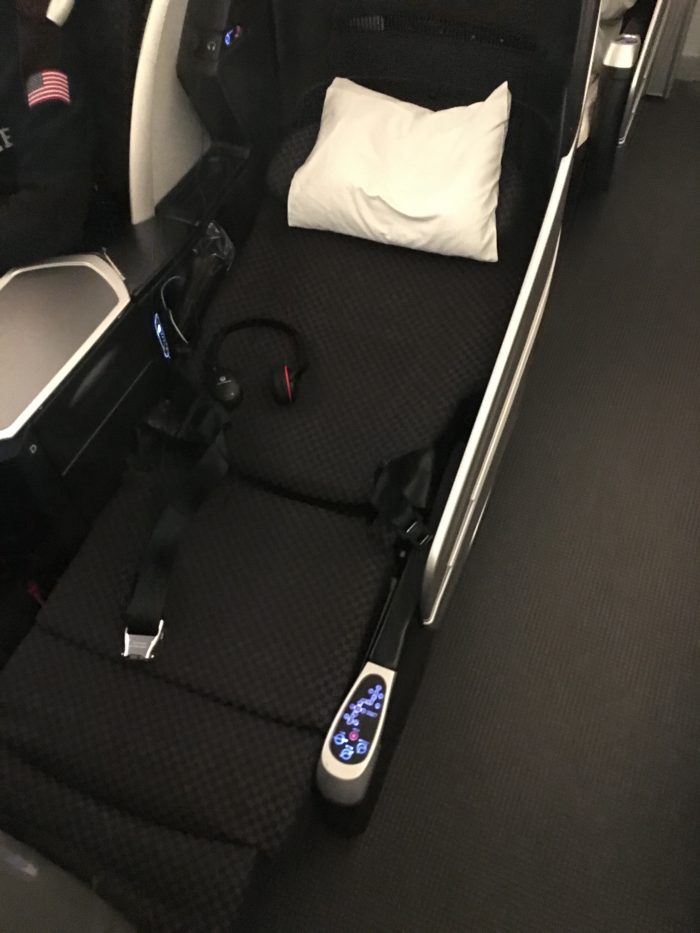 After my nice long nap, I woke to some snacks available in the large galley area, including some macarons. 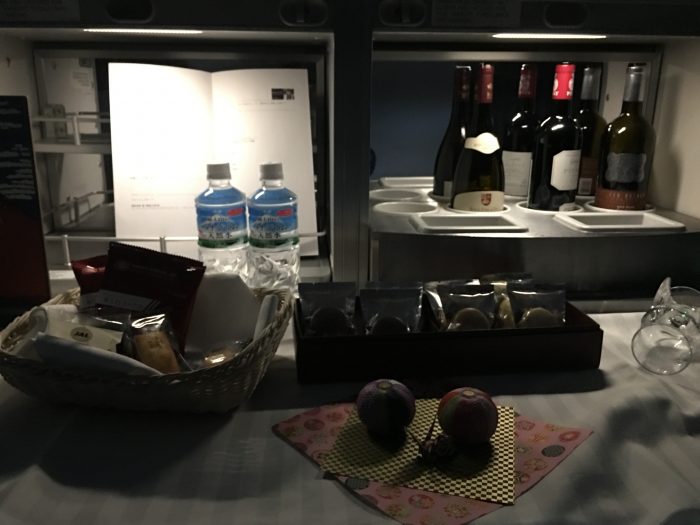 In addition to that area being kept well-stocked, the restroom always had plenty of mouthwash, toothbrushes, and toothpaste (and of course it had a fancy Japanese toilet as well). 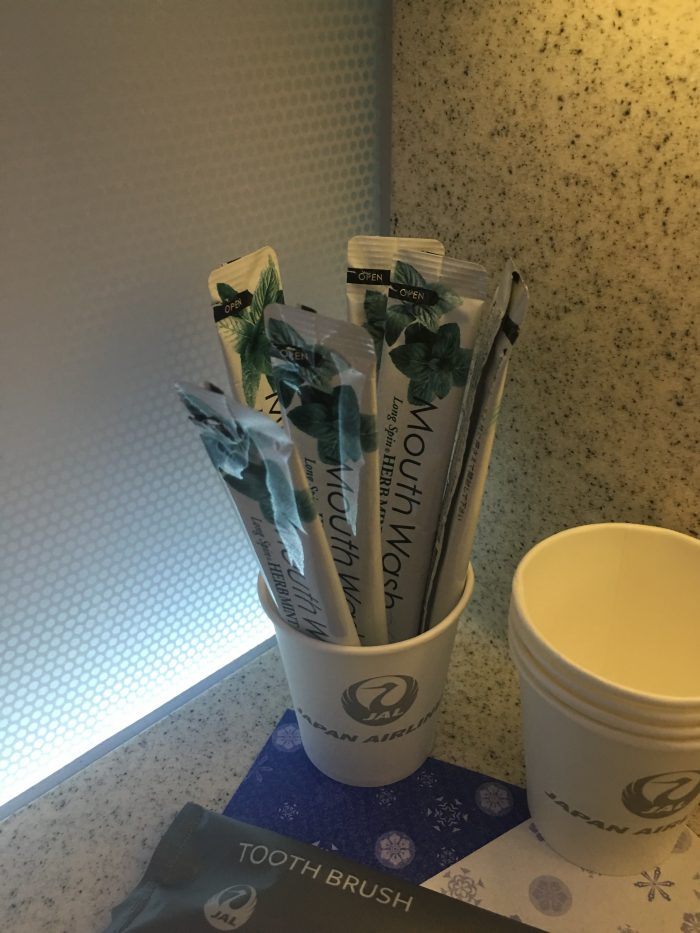 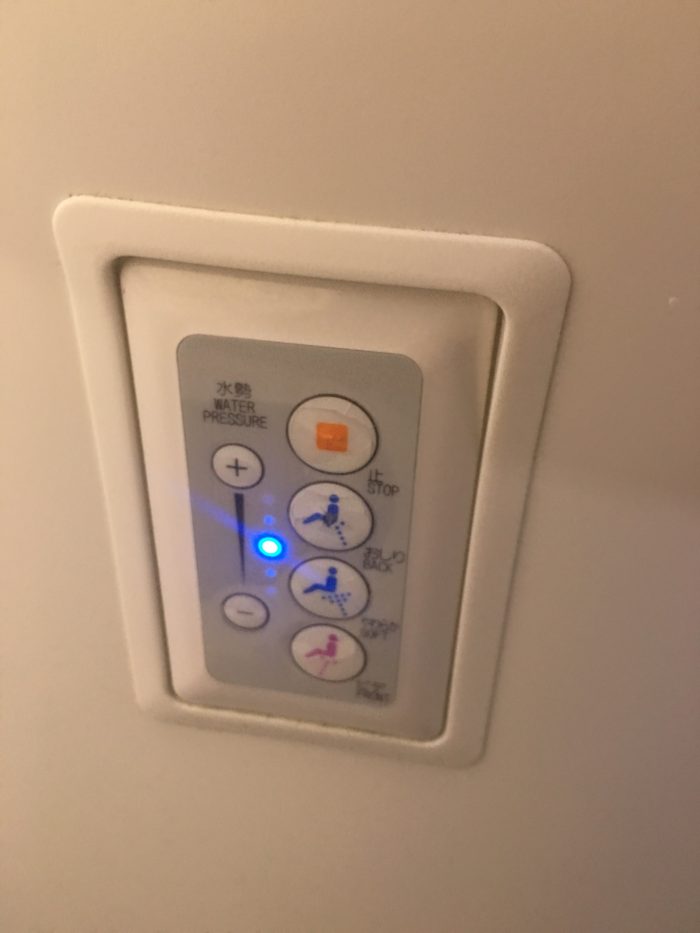 A couple of hours before our arrival, I ordered the cheese platter for a snack. 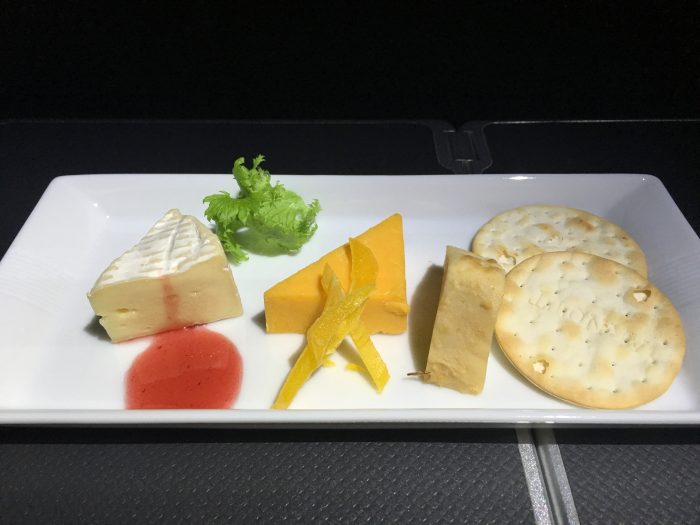 We landed at LAX, and although I had plenty of time before my flight to San Francisco, I cleared Customs & Immigration in record time. I have Global Entry, but even with being the first person through it, the bags from the flight were already coming out at baggage claim. That’s impressive work at LAX. Of course, my next flight was delayed, and then I had to take a bus to a remote terminal (though at least that way I got to pretend I was in Speed, which was fun), so that part was less impressive.

Overall, my first experience on a Boeing 787 was outstanding. It was a wonderful flight in general, thanks to the fantastic business class meal & service by Japan Airlines. With a better seat, the experience would have been perfect, but it was still one of the best business class flights I have been on.