Getting to a high viewpoint is a great way to get to know a new place. In Bilbao, Spain, the Funicular de Artxanda is a quick way to access the Mirador de Artxanda, which has amazing views across the city. Plus you get to ride a funicular, which is always fun. 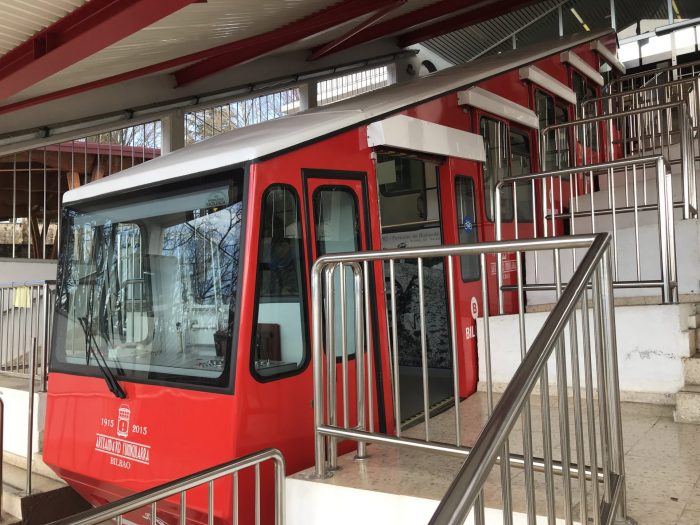 Bilbao sits in a valley along the River Nervion, with Mount Artxanda looking down on the city from above. As Mount Artxanda became a popular recreational area for people in Bilbao thanks to its views, cooling breezes, bars, & restaurants, the desire for better mountaintop access became more and more popular. In 1901, the idea of building a funicular railway from Bilbao to Artxanda was first considered. However, it wasn’t until 1915 that the Funicular de Artxanda, known affectionately as “Funi,” was built after funding was secured. 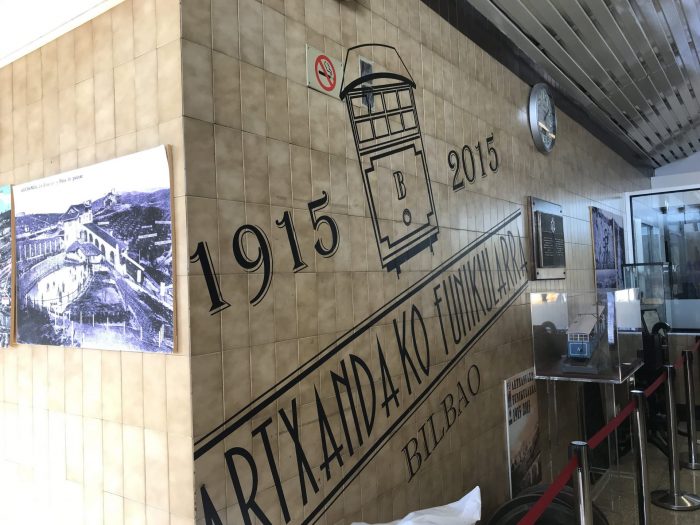 During its history, there have been a couple of periods where the Funicular de Artxanda didn’t operate. First, it was bombed during the Spanish Civil War. Then it closed from 1976-1983 following an accident. Nowadays, the route uses modern funicular trains.

The lower end of the Funicular de Artxanda is located at the Funikularreko Plaza near Matiko train station, just across the River Nervion from the Bilbao city centre. It’s not far from the Guggenheim Museum and Bilbao Fine Arts Museum. 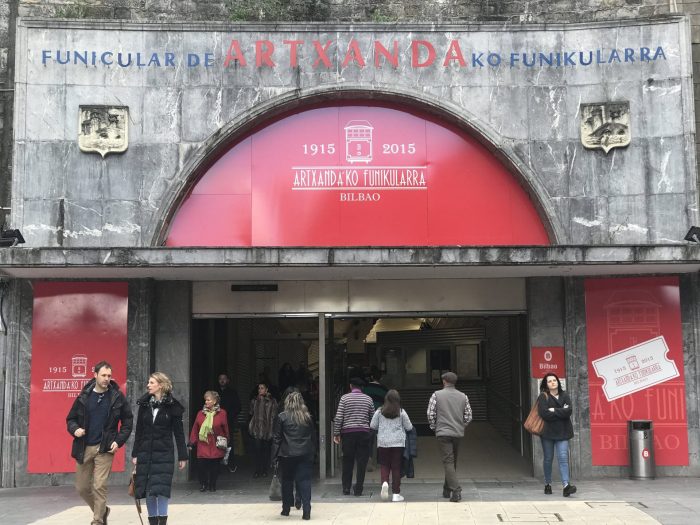 Funicular de Artxanda trains run every 15 minutes. Depending on the season, the funicular runs from approximately 7am-10pm every day, allowing for sunset views of Bilbao.

Tickets for the Funicular de Artxanda (website) are €4.30 round trip or €2.50 one way. However the ticket price is greatly reduced to €0.65 if you use a contactless Barik card. It’s a good idea to get one if you are going to be using Bilbao’s public transportation with any frequency, as you can save a lot of money.

Upon boarding the Funicular de Artxanda, most people fill the lowest part of the train first, as it has the best views looking down toward Bilbao. However, there are also plenty of windows in the other train car sections. The three minute ride covers the 770 meter journey to the top of Artxanda, which is 226 meters above Bilbao. 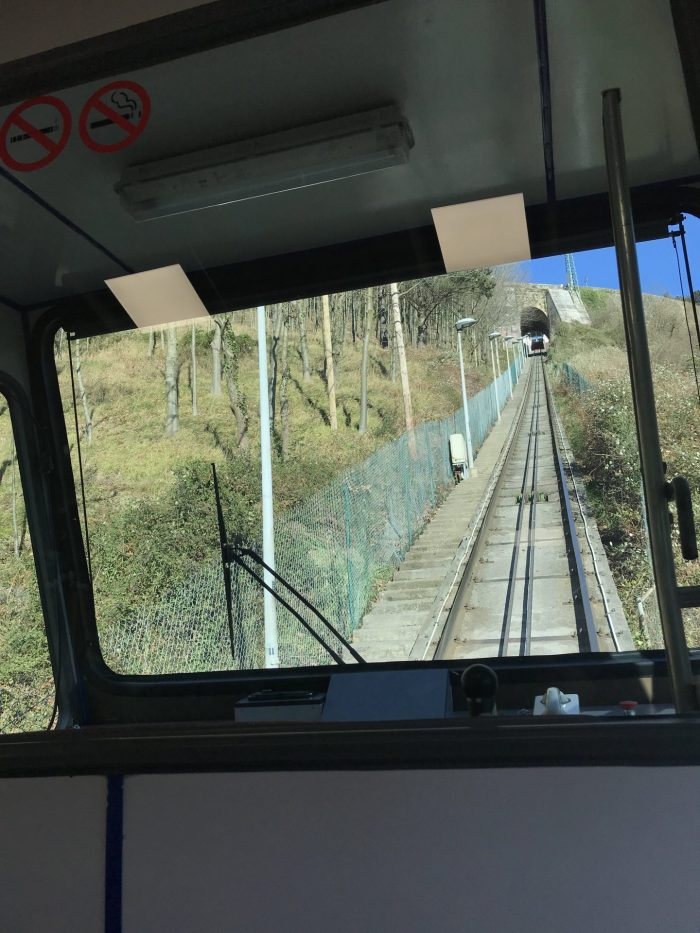 The Funicular de Artxanda arrives at an area with a couple of parks, plus a viewpoint known as the Mirador de Artxanda. 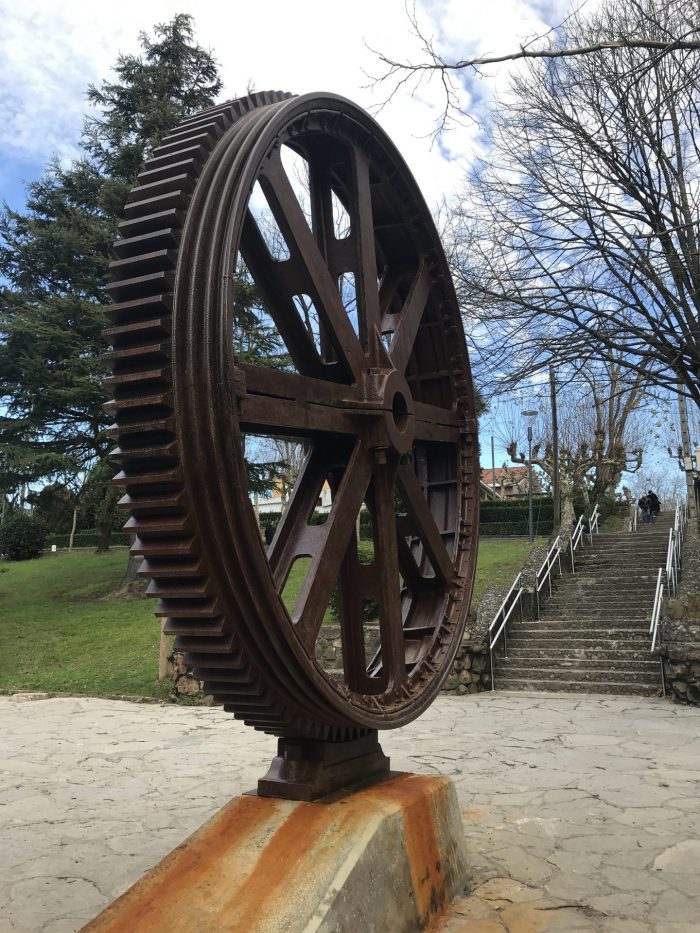 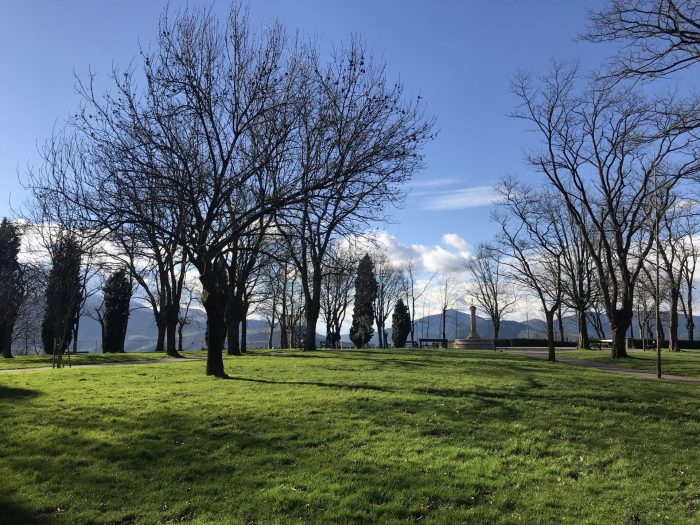 The Artxanda viewpoint is breathtaking. Thanks to the generous operating hours of the funicular, the viewpoint is a lovely place to watch the sunrise, sunset, or city lights. On a clear day, you can see across all of Bilbao, past the Vizcaya Bridge, and out to the Bay of Biscay. 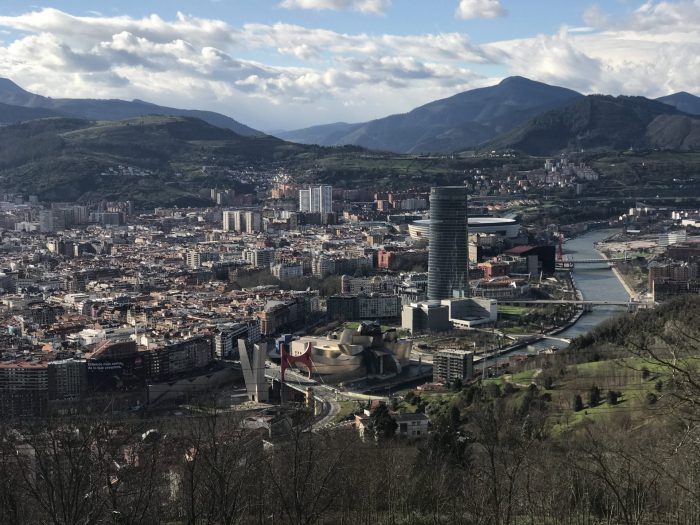 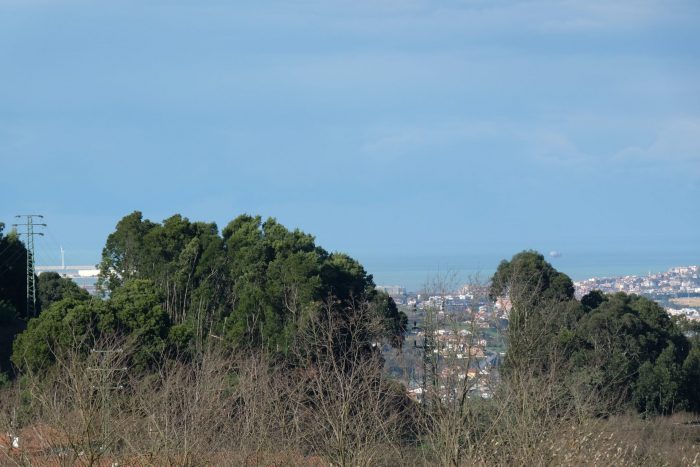 The air had been swept clear by bone-chilling winds preceding an imminent December storm, but the rain had not yet arrived. It’s easy to see how these mountain breezes would be enjoyable on hot summer days, even if they were unwelcome in the winter.

Right below the Mirador de Artxanda, the beautiful Guggenheim Museum catches the sunlight, sending it in every direction above La Salve Bridge. 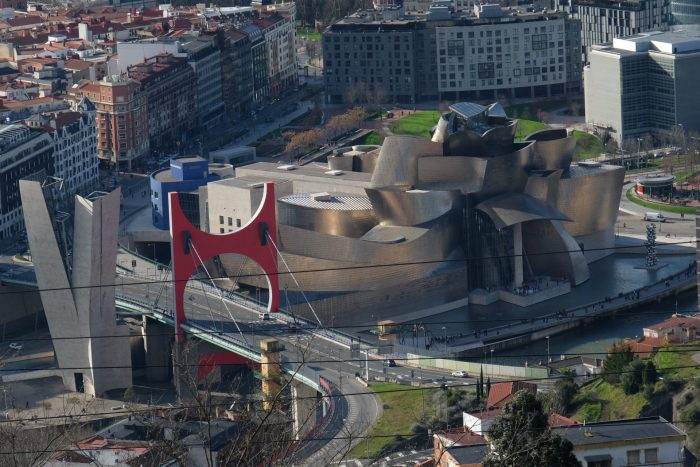 Further beyond is the Torre Iberdrola, Bilbao’s tallest skyscraper. Past that is San Mamés Stadium, home of the beloved Athletic Bilbao. 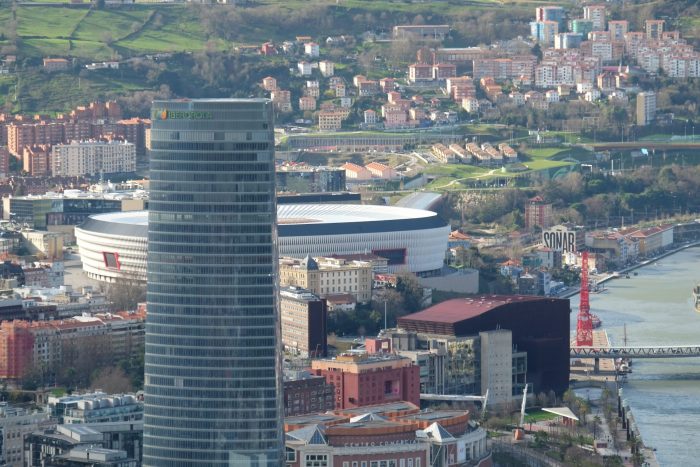 The green areas on Mount Artxanda are popular places to have picnics. You’ll often see people traveling up the funicular with supplies. You can buy food & drinks at the shops at bottom of the funicular. There are not many options at the top, though there are a couple of small txakoli restaurants. Otherwise, you can just wait and get pintxos back in the city centre of Bilbao.

Thanks to its amazing views, a ride on the Funicular de Artxanda up to the summit viewpoint is a wonderful introduction to Bilbao. It’s a great way to take in city views while spotting places you’d like to go or places you’ve been.