During my time in Stockholm, I joined an afternoon-long food tour of the city called “What does Stockholm taste like?” This was another complimentary pre-TBEX activity courtesy of Visit Stockholm. The Nordic experience tour was run by Food Tours Stockholm (TripAdvisor

) & covered all aspects of modern Swedish & Scandinavian cuisine. There are several Stockholm Food Tour options, which you can view below. 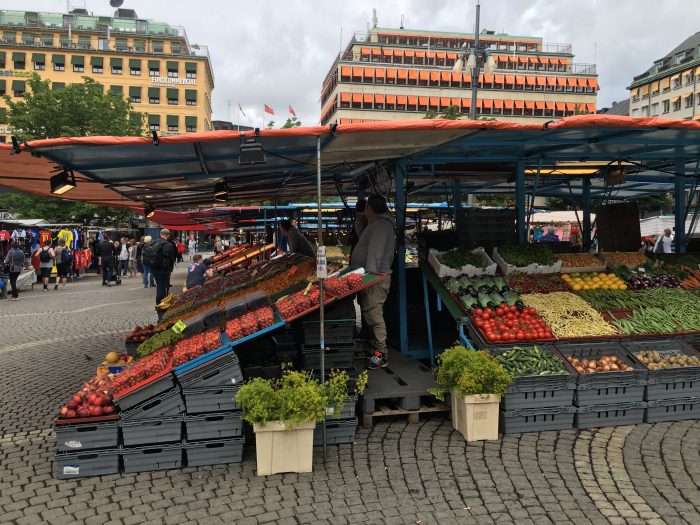 Inside Hotorgshallen, you’ll find that the largest parts of the market are underground in the basement. While I was waiting for everyone else to arrive, I had taken a quick lap around the basement just so I could see what there was to offer. At 1:30pm on a Wednesday in July, it was fairly quiet. 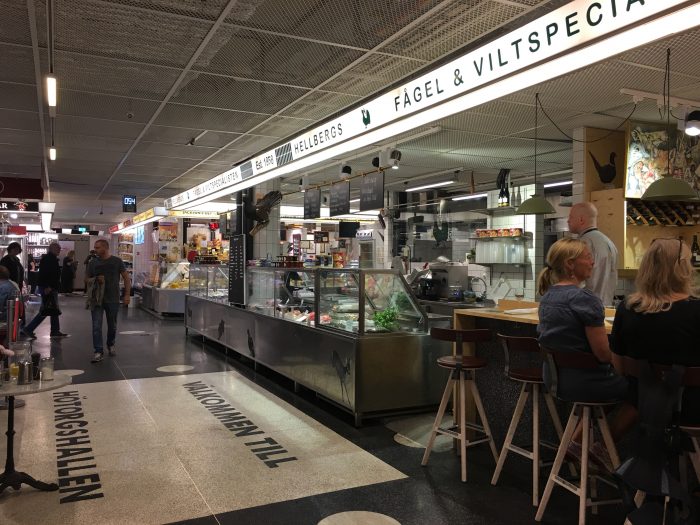 The market hosts a variety of small shops selling a variety of foods including cured meats, cheeses, seafood, baked goods, soups, chocolates, a wine shop, and much more. All of the shops in Hotorgshallen are of high quality, including local foods as well as items from all over Europe. I had arrived hungry, so it was difficult to not eat anything while I waited, but I knew we would be well-fed on the tour. Heading back outside, I laughed internally at the people who were eating Pizza Hut rather than the great food just below it. 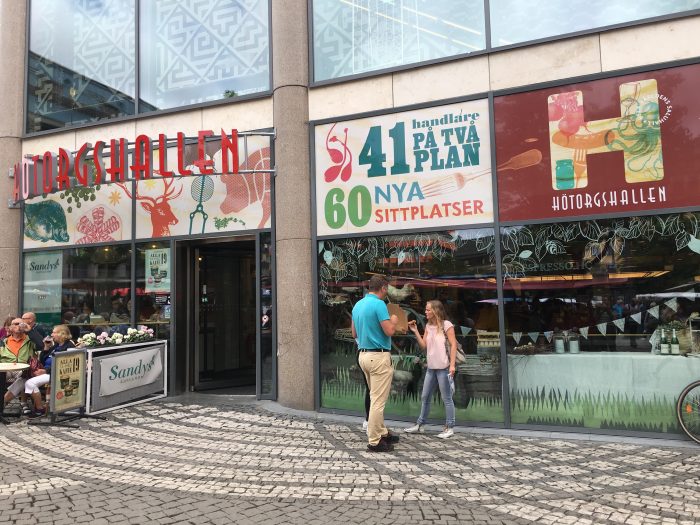 Gunilla (Gunillablix.se), our guide, was teriffic. Food Tours Stockholm are pros at what they do. We each got a bottle of water, plus a bag and a booklet with details on all of the places we would be visiting. This is great for keeping track of everywhere you go, since there are a lot of stops on the tour.

We began our tour of Hotorgshallen at Hellbergs, a butcher shop that specializes in game & birds. At this first stop, we knew it was going to be an exciting day of trying new foods, as they offered us reindeer pate, moose sausage, and smoked bear loin. They all tasted amazing, but the bear was especially delicious. 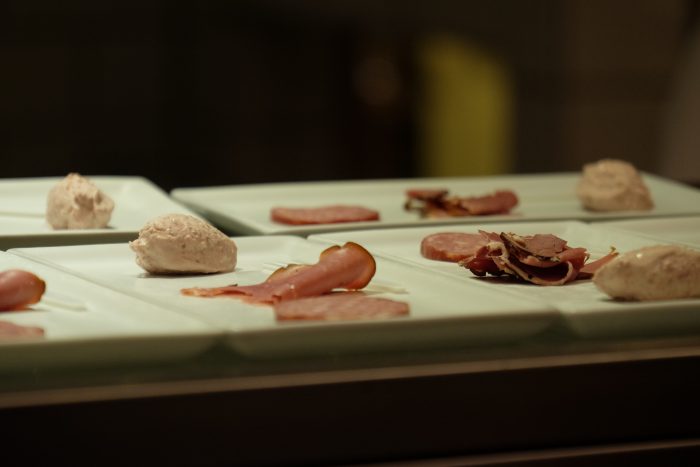 Our next stop was at Fromageriet, a cheese shop. It was here I had my first taste of vasterbotten cheese, a classic aged Swedish hard cow milk cheese, which I would have plenty of when I traveled to northern Sweden the following week. 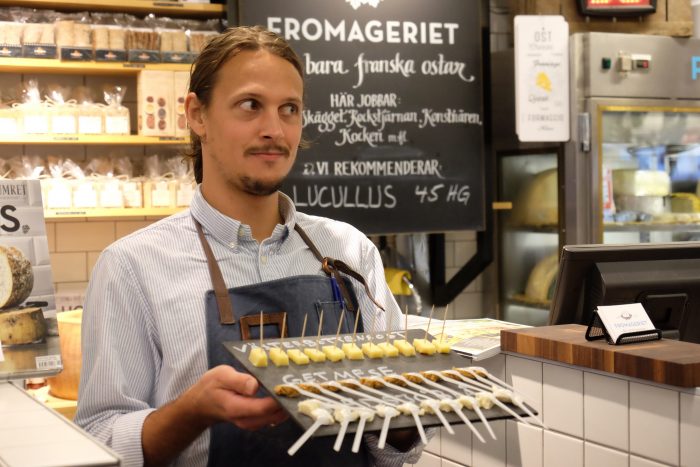 We also tried whey, which tasted like salted caramel ricotta to me, but not sweet, as well as a sheep milk blue cheese that was incredibly smooth & creamy.

From there, it was time to head to Finska Butiken, a Finnish bakery run by a mom and her four daughters. Here we had Karelian pasties, which are scrumptious items that consist of a crust filled with rice & egg butter, which is essentially just hard boiled egg mixed with butter. 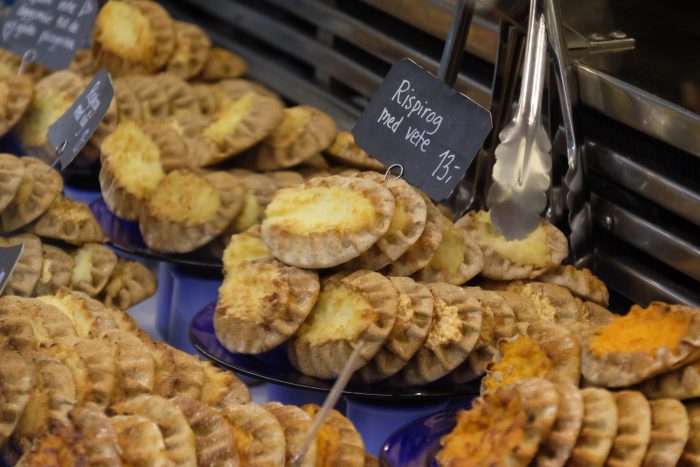 Next up was Hav, which specializes in seafood.  Here we had different times of herring & salmon, washed down with Linie Norwegian schnapps and Tuborg beer. We learned the traditional “skål” toast of Sweden, with your chin down and eyes locked on the other person. 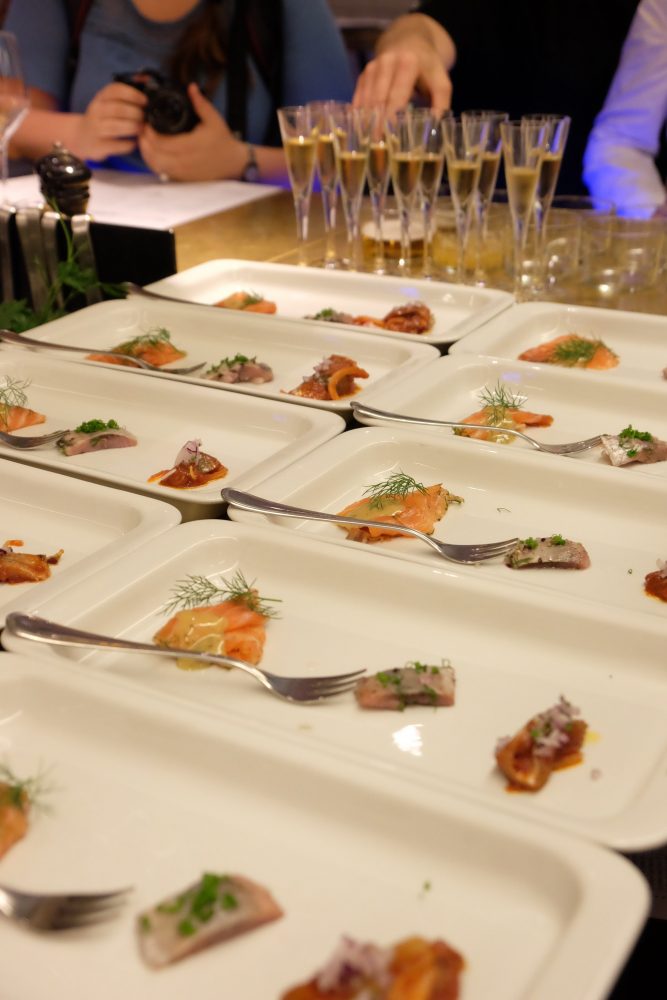 Being on a food tour with other travel bloggers is pretty funny. If you think that regular people take too many photos of their food, just wait until you have over a dozen bloggers snapping photos and taking notes for Instagram & blog posts. We had a good, respectful group, so everyone did a good job of staying out of each other’s way. Since we were spending the entire afternoon & evening together, we all ended up making some friends that we would hang out with for the rest of the conference.

One of the nice things about this food tour of Stockholm was the pacing. We started off in Hotorgshallen while still staying mobile, and I never felt too stuffed to eat at any point in the day. There are some places where you sit, and some times where you walk for a bit, so you’re never uncomfortable.

The last stop in Hotorgshallen was at a spot called Kajsas Fisk, which is famous for their fish soup. Kajsas Fisk sells 150-200 liters of their seafood soup each day, which they adjust based on what fish is available at the moment. It was served with Swedish bread & aioli, plus we had their house wine, which was a nice Chardonnay. 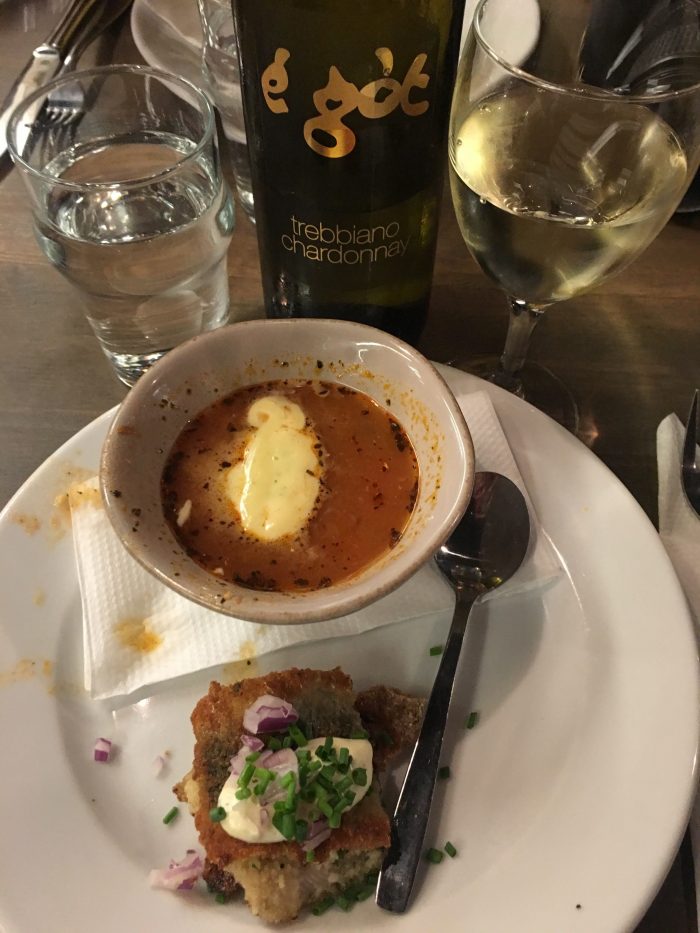 After Hotorgshallen, our next stop was about a 5 minute walk away, though it turned to 10 minutes after we accidentally left someone behind who had wandered off.

This next spot was a cool place called Urban Deli. Urban Deli is a combination of a restaurant, food hall, and market, and it’s a must-visit for any food lover in Stockholm. They have everything you could want, from house-made bacon & sausages to ready-made meals (plus microwaves to heat them and eat them on the spot). 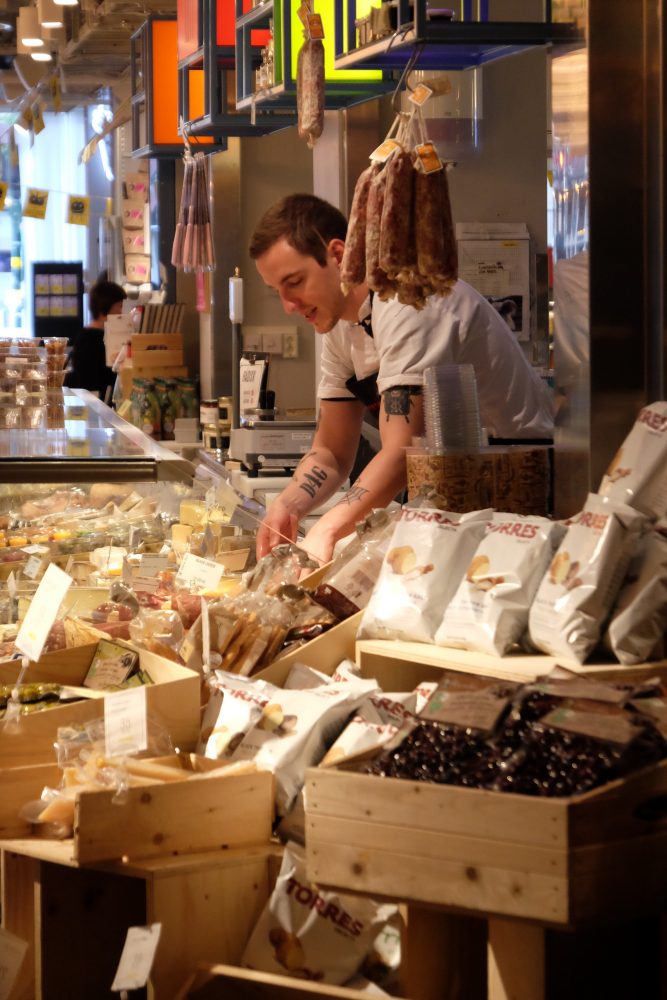 The foods they sell come with recipes & instructions included, so even the most amateur chef can still make a good meal. While their wide array of different foods available speaks volumes about the diversity here, this sign also tells you everything you need to know about Urban Deli. 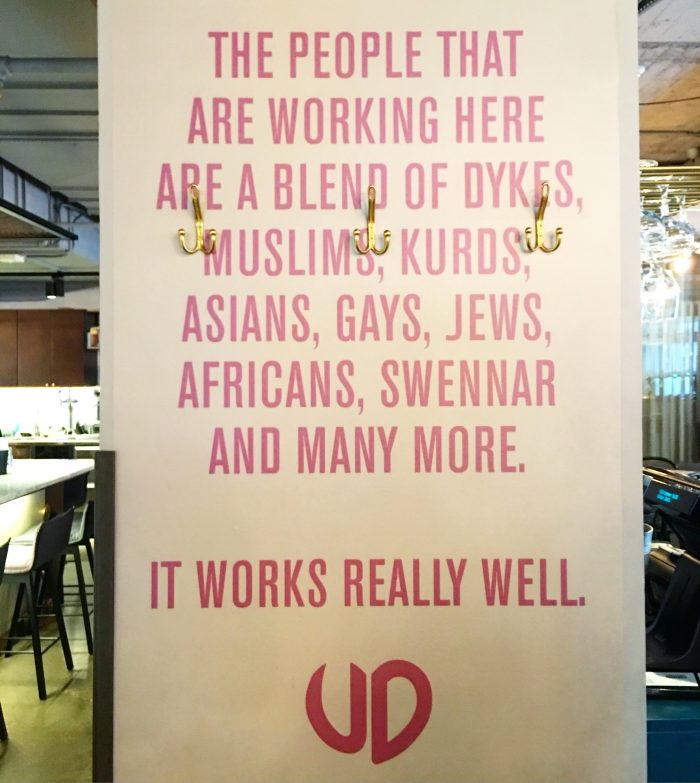 We had the dry aged Swedish beef tartare, which was tasty. 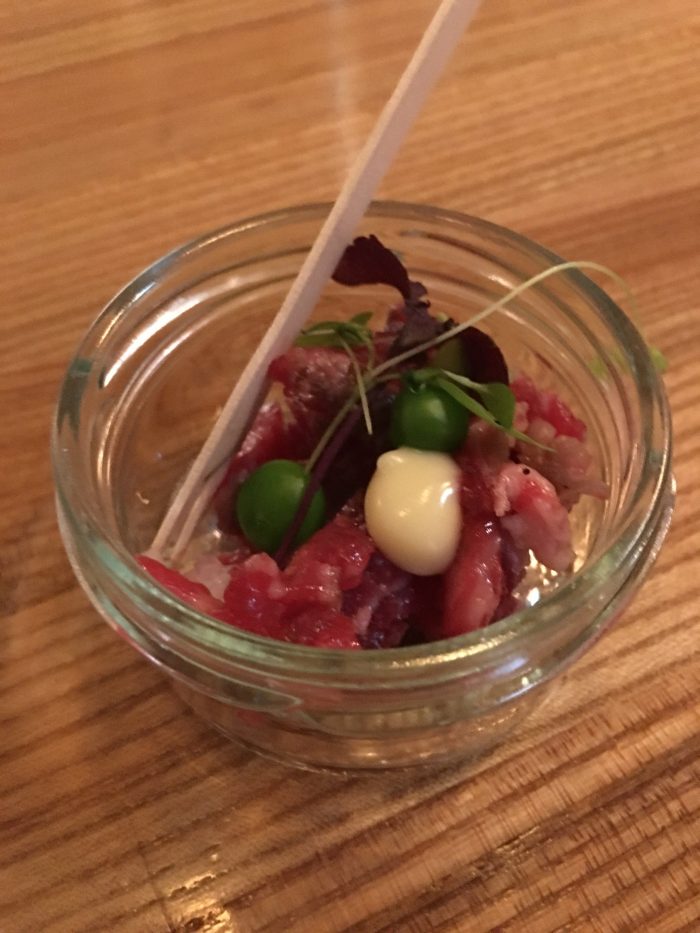 Since Hotorget was not far from my hotel, I would end up going back to Urban Deli a total of three times during my visit to Stockholm. On another visit I had a smoked salmon & mango aioli wrap, then I went back with several travel bloggers for drinks and a late night burrata snack.

We were done in the Hotorget area, so we hopped on the Stockholm metro and took it to Odenplan, a couple of stops away. After a brief walk, we were at Österqvist, one of the oldest delis in Sweden, having opened in 1888. It sells a variety of deli items from around Europe, mostly from Spain, Germany, and Italy. While there are only a couple of Swedish products available, it’s one of the only spots in Sweden to get some of the other items they sell. Here we had jamon iberico, goat manchego, and manzanillo olives. 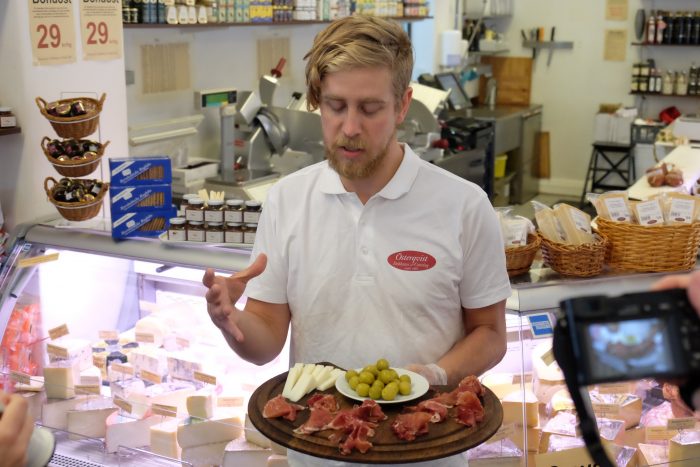 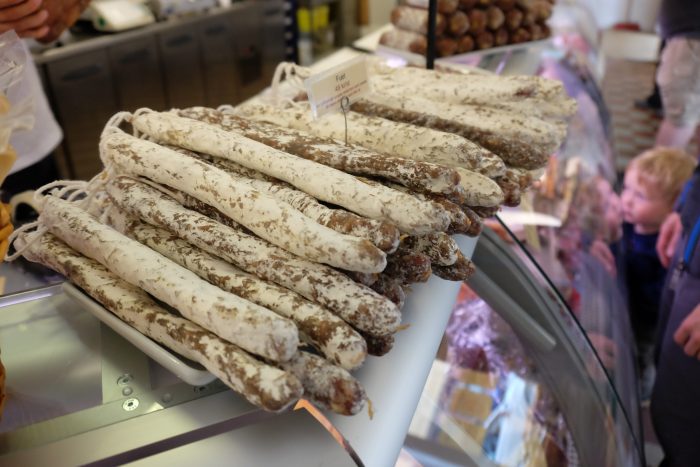 From there, we slowed things down a bit, heading to a restaurant called Tennstopet for a traditional Swedish lunch. 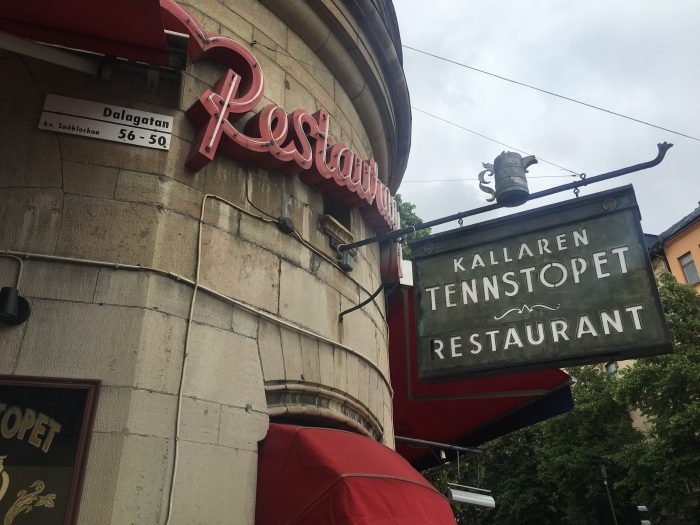 Tennstopet is a Swedish pub with a tinge of Scotland, somehow. It’s a warm, inviting place, with cozy rooms hidden down narrow hallways. The food is Swedish comfort food. We had Swedish meatballs with lingonberries and picked cucumbers. While many places in Sweden serve meatballs made by machines, Tennstopet makes theirs fresh by hand. 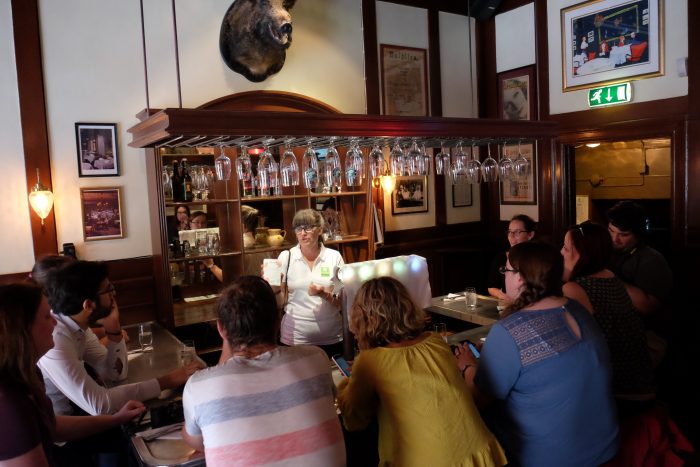 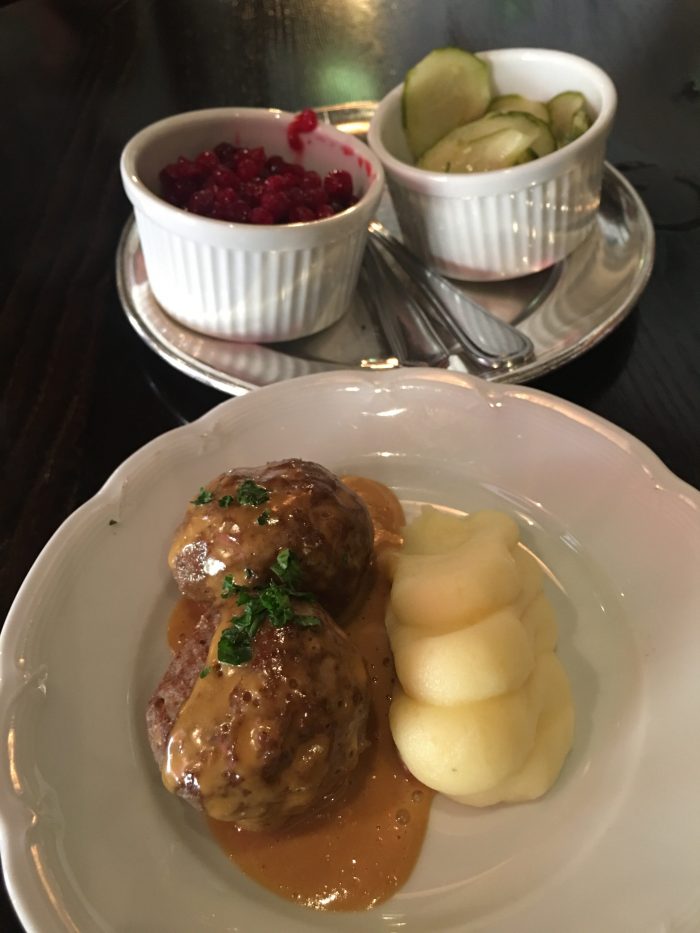 After the meatballs, we took a walk through a park toward our next stop. Along the way, Gunilla offered us candy, and told us that Swedish children are only allowed to have candy on Saturdays. After one taste of her first offering, even that might be too much. 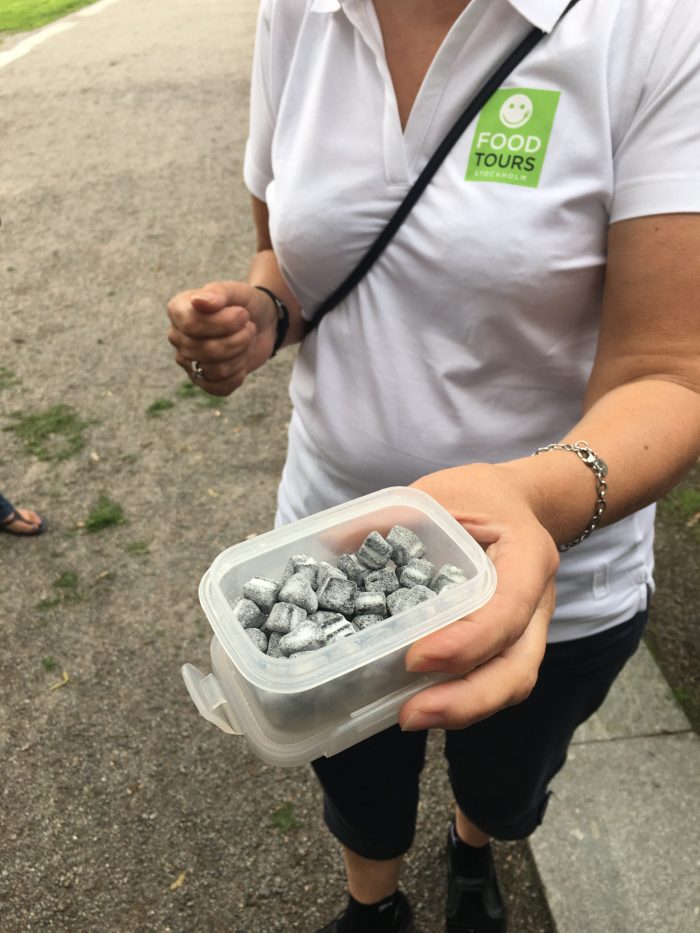 The first candy we tried was a liquorice candy, which I thought was coated in powdered sugar. It was not. Surprisingly (to all of us non-Swedes), it was coated in salty ammonium chloride.The resulting reactions to the shock were entertaining. Thankfully my reaction was not caught on video, unlike some of the tour group members. I can’t say salty liquorice is something I’d want to have again. Gounela wisely gave us the candies near a trash can in case anyone needed to bail out on the attempt. She also had more traditional raspberry gumdrops for us.

After walking a bit more, we arrived at Bakery & Spice, which is a pretty good name for a place that sells spectacular cardamom bread. 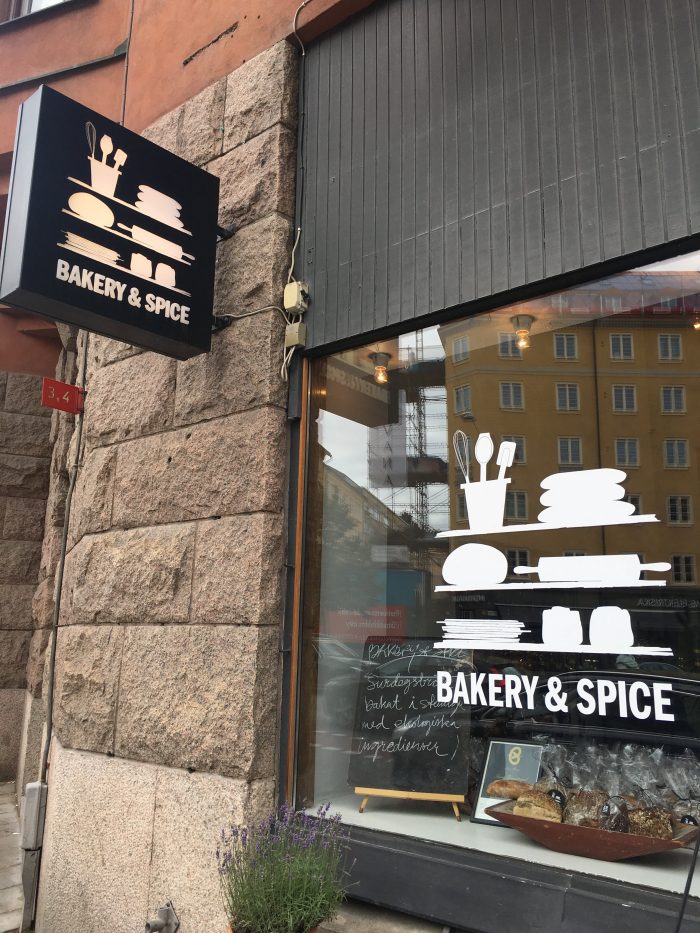 We tried a variety of baked goods, all of which were great. 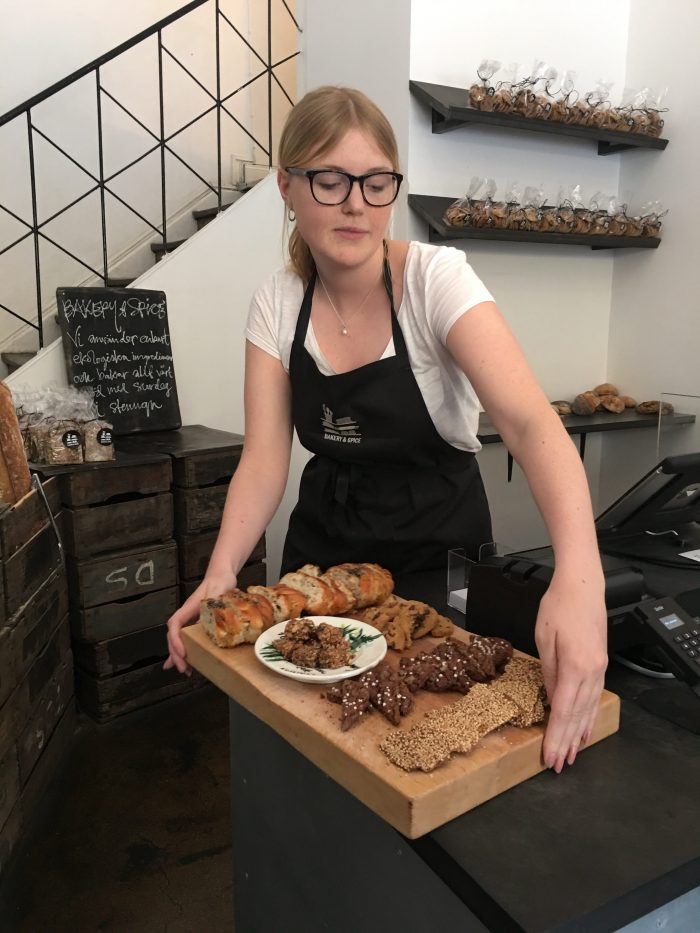 Next on our dessert portion of the food tour was the Chokladfabriken chocolate factory. We had hot chocolate along with several pieces of quality handmade chocolate, including salted caramel & licorice (thankfully that one wasn’t nearly as salty as the candy we’d just had!). 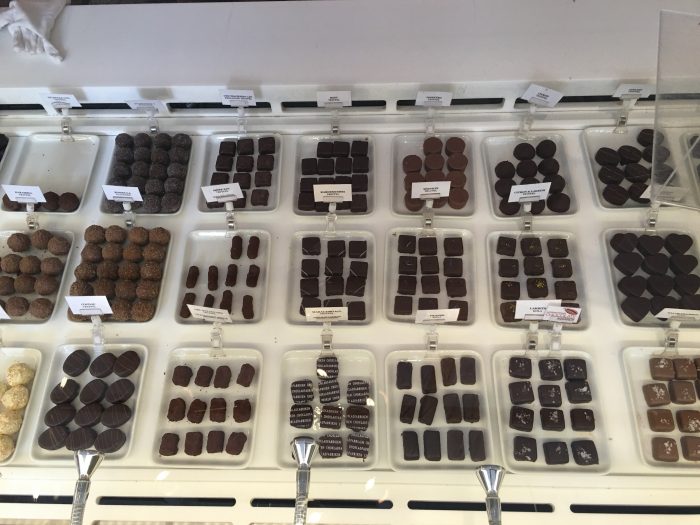 Following Chokladfabriken, we walked a bit more to Rörstrands Slott, which was built as a wedding gift back in the 1600s. I need more friends who give gifts like that. 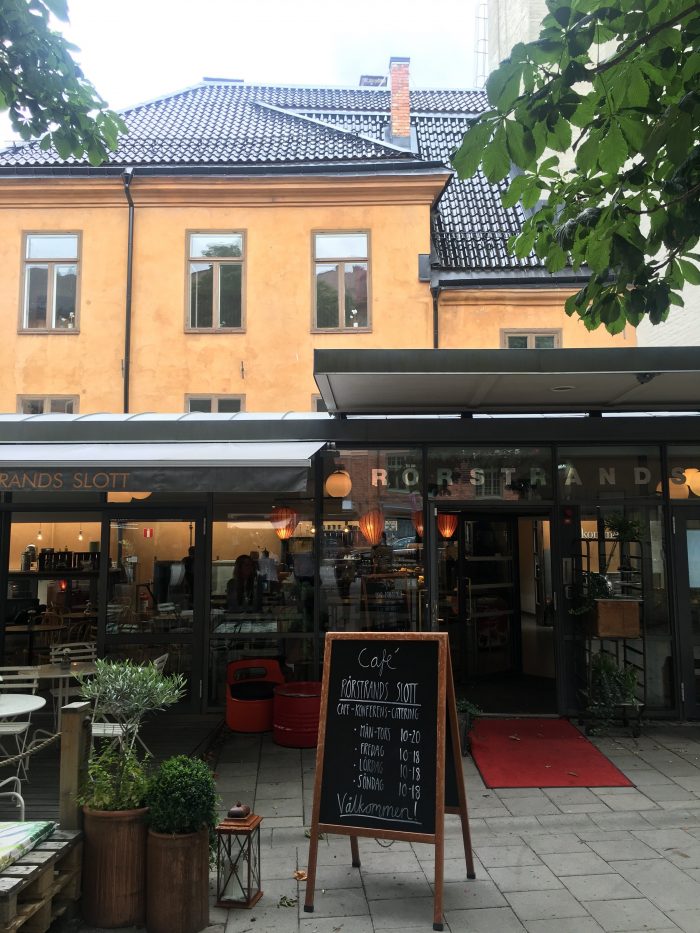 We were led down to the dungeon of the castle, where a few tables were set up to enjoy fika. For those who are unfamiliar with the concept of fika, it’s essentially an afternoon coffee break, but the true star of the show is whatever snack you have. Along with our tea and coffee, we had cinnamon rolls, crumble, and chocolate balls, which are apparently the first items Swedish kids learn how to cook. 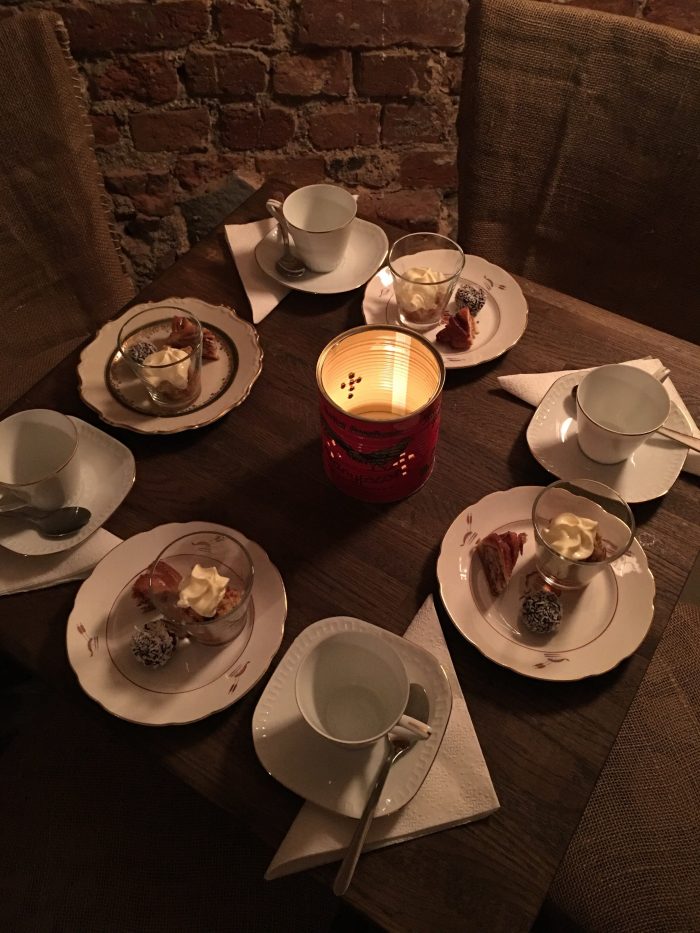 By this point, our day was only partly done, even though we’d had plenty of food and drink & were quite full. We were finished with our offical food tour, but next we were heading to another special event at the Winery Hotel that had been organized by Visit Stockholm. After our fika, Gounela led us to our waiting tour bus, which would take us on the second part of our food tour of Stockholm. Stay tuned for my next post to read all about my visit to The Winery Hotel.