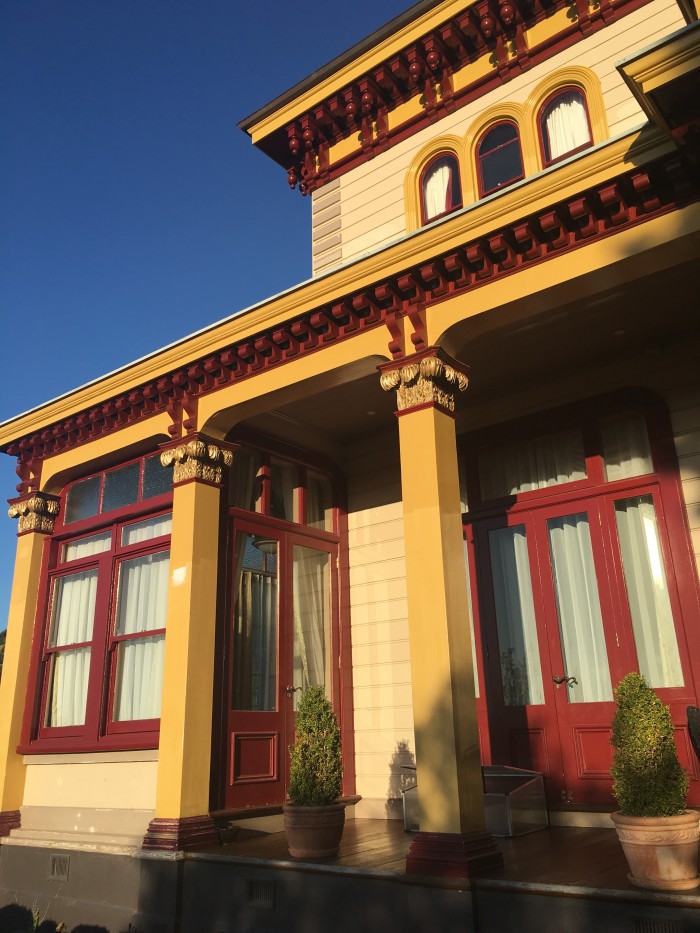 Nelson itself feels like a small-town, similar to what you might expect from a place in the Midwest (or perhaps Alameda in the Bay Area). The walk from the bus station to Fellworth House took about 15-20 minutes. It wasn’t the most convenient place to stay, especially with a suitcase, but it was a good deal (about $67 USD per night, plus I booked through Hotels.com

, so I will eventually get a 10% savings thanks to their Welcome Rewards program). The Fellworth House specializes in rooms for single travelers. While it’s a bit of a walk away from the city center, the views are great.

As I mentioned before, the 130+ year old house sits on a hill at the edge of Nelson, so getting up that hill wasn’t the easiest with a suitcase. There are two ways up to the building, one is a dirt path and staircase, the other is a driveway for cars. I recommend the driveway in most cases, especially if it’s dark. It’s not too much longer, and you have to climb the same amount.

Upon entering Fellworth House, I could tell it was a special place. It’s an historic building & certainly no cookie-cutter hotel. The layout & decor are eclectic, and while I saw no signs of this, it felt like the sort of old hotel that should be haunted. The ground floor of the building is actually a dentist’s office, and there’s a dog that hangs out there as well. 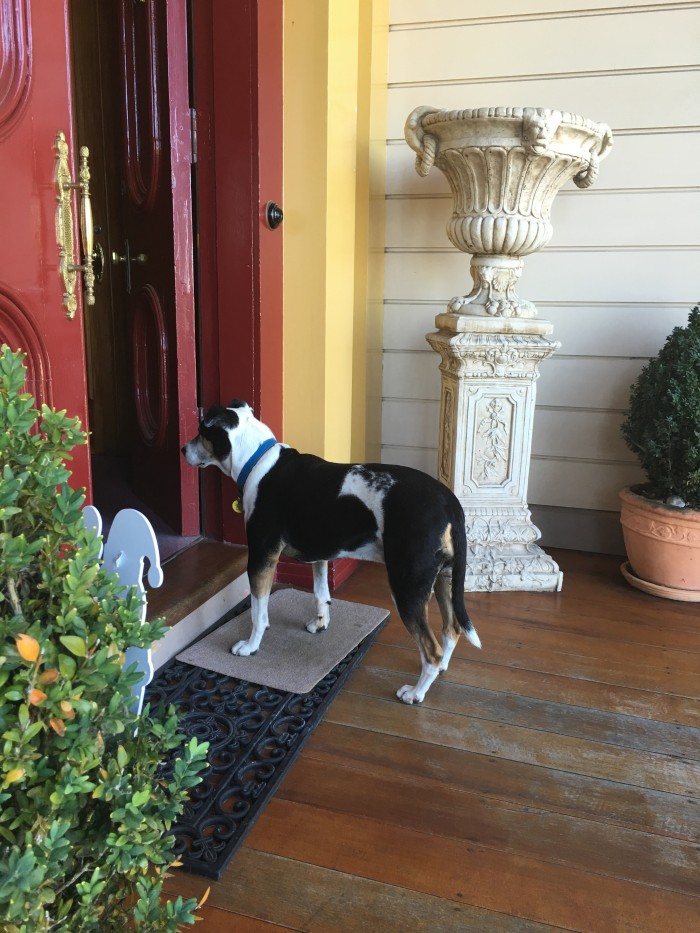 Since it was Boxing Day, there was nobody there for check-in, but everyone’s keys were waiting at the front desk. It’s nice to travel to a place where the honor system works well. 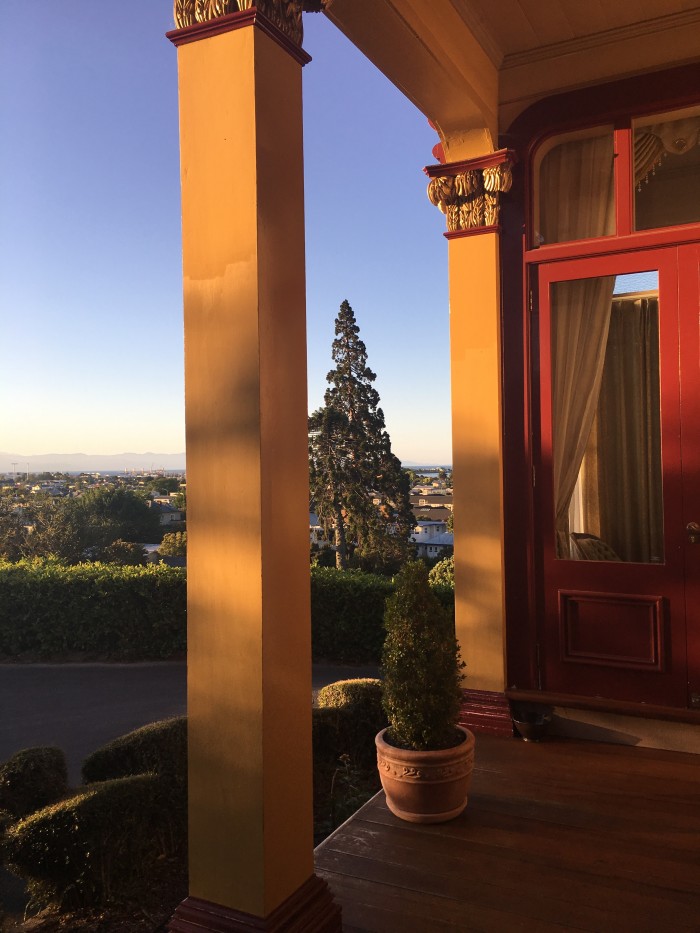 My room was huge. It had a king size bed & large windows that looked out over all of Nelson toward the sea. 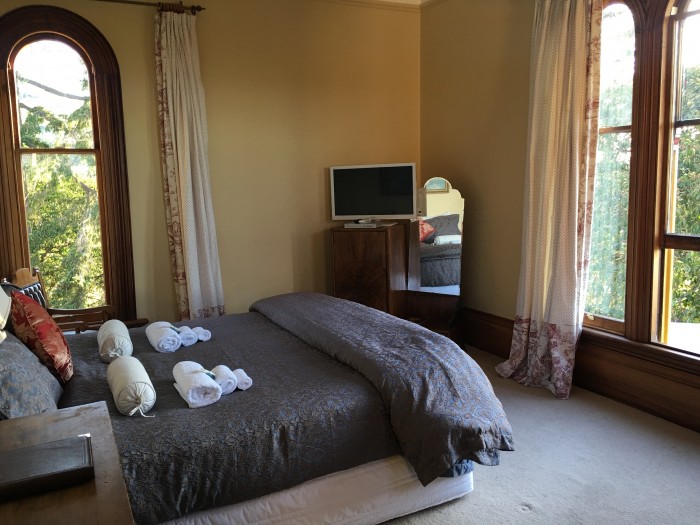 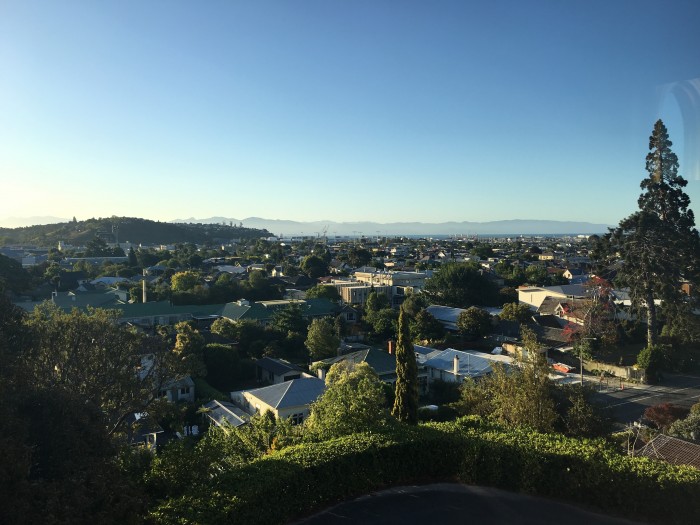 There were a couple of minor issues with the windows. One, since there were no screens & it was a forested area nearby, I was reluctant to have the windows all the way open thanks to insects. I had been eaten alive by sandflies at this point, and I didn’t want to find out what other bugs wanted to feast on me in New Zealand. As a result, I covered the open windows with closed curtains, which meant the room was a bit warm at night. Also, one of the other windows had no window covering, so on a long summer day there was no way to keep the sun out early in the morning. 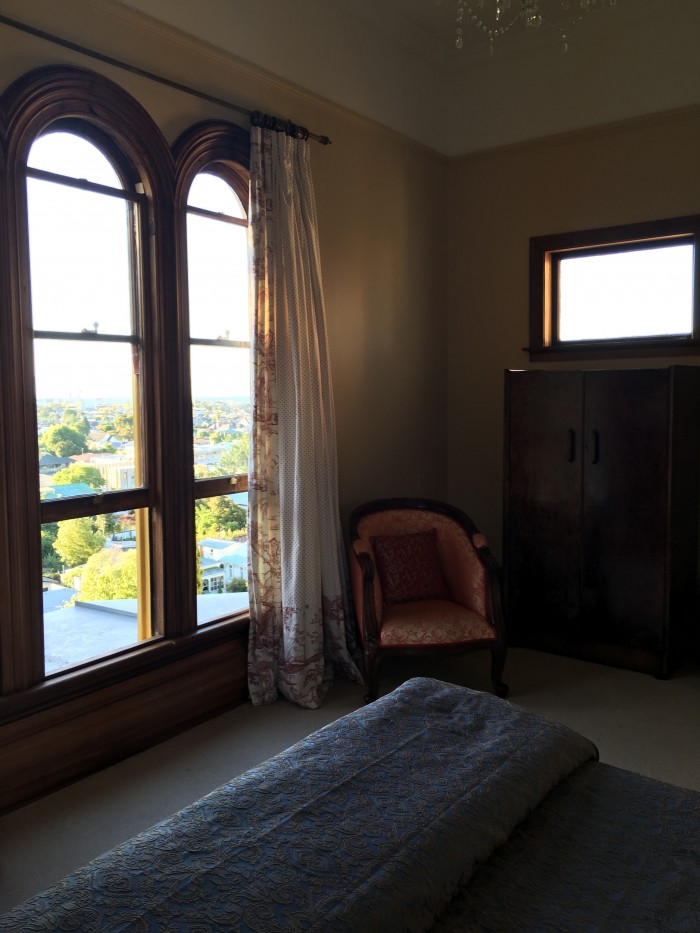 Inside the room there was a book that included the history of the property. Here are the first couple of pages from it. 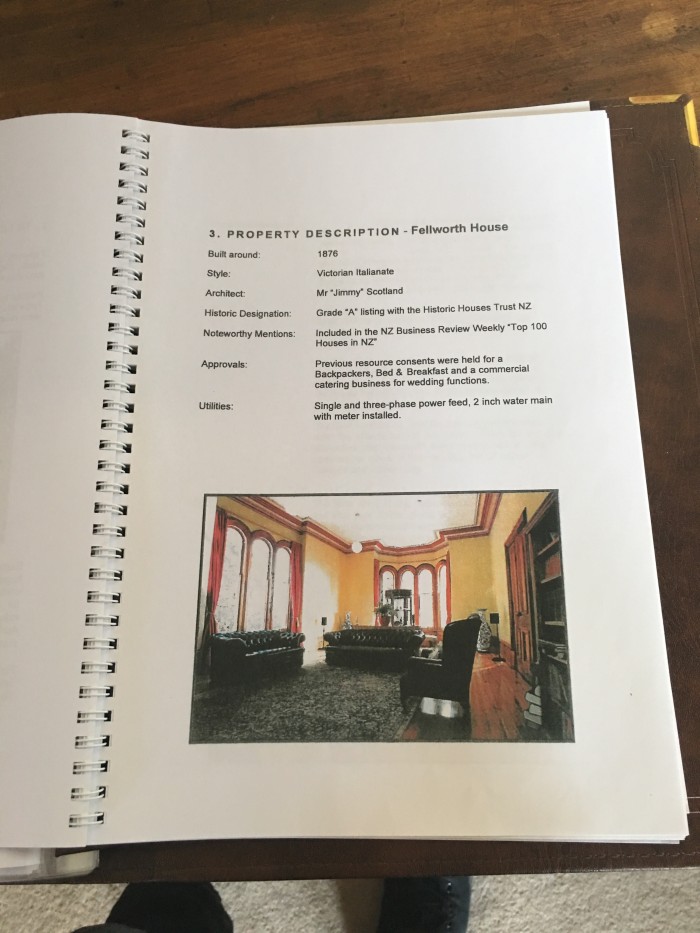 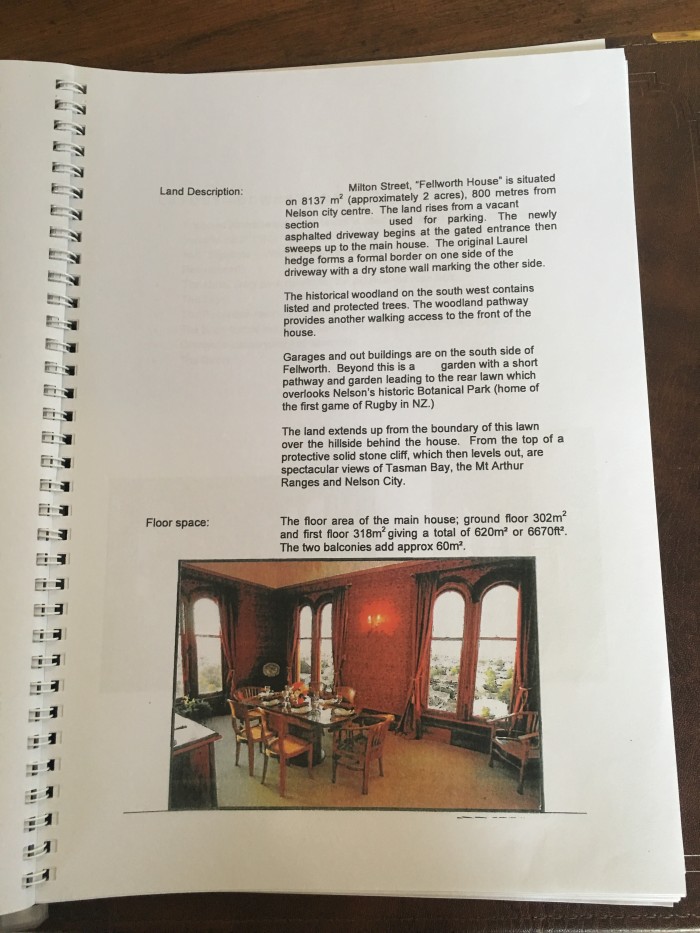 While the room was big, there was no ensuite bathroom. Instead, there were several shared bathrooms scattered throughout the building. A couple of them were large & also had a shower and bath. I didn’t have any issues with finding a time when they weren’t in use, however. There was also a kitchen and common areas, should you wish to hang out with other travelers who are staying at Fellworth House.

Fellworth House is a relaxing place to stay. The building itself is quiet and has great views, plus it has easy access to area parks. Queens Gardens is located just a couple of blocks away toward the city center, and it has lovely ponds & flower gardens.

On the street right near the hotel, you’ll notice signs directing you to something called the “Center of New Zealand”. If you’ll follow them, you’ll head further up the hill looking out over Nelson. This a park filled with nice hiking & dog walking paths. At the very top, there is a surveying monument. While it’s not actually the center of New Zealand, it is the center of the Nelson district. The 20 minute hike to the top is worth it, as you get clear 360-degree views around the entire area.

Heading back down the hill toward Nelson, you’ll pass locals who are out enjoying the day. This is the sort of place where everyone says “hi” on the paths, so if you’re like me & not used to nice people, you’ll be a little surprised at first.

Finally, right near the Fellworth House where you started the hike, you’ll see a large flat field. This is the Botanics, and it’s where New Zealand’s first ever rugby match took place. Given how well the All Blacks have done historically, I’d say that went pretty well for the country. 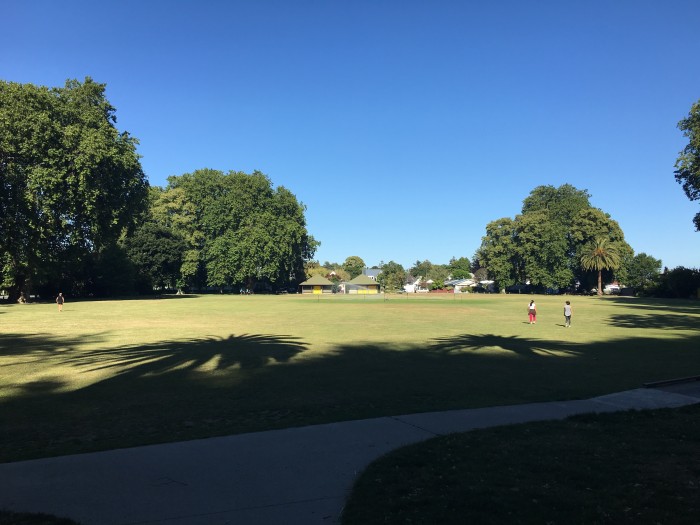 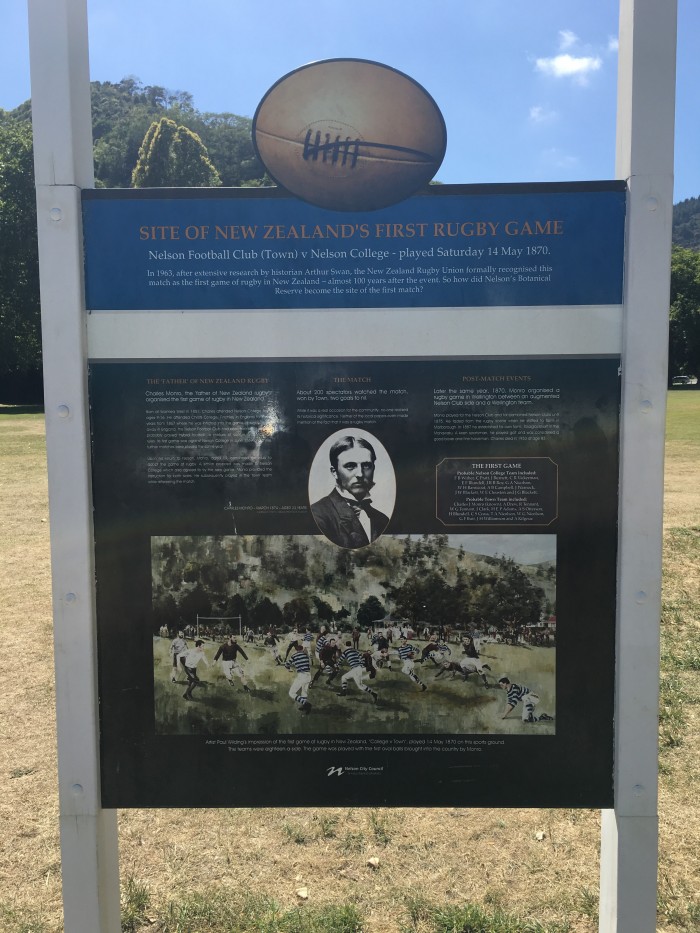 Nelson is a town filled with lots of history, and if you’re looking to connect with the past, the Fellworth House is a nice place to stay when you’re visiting.