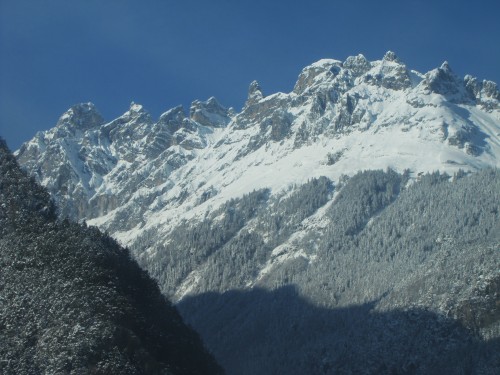 This part of my trip was comprised of just a couple of nights in each place, so I was off to Zurich, Switzerland the next day.

Taking the train from Lake Como, Italy to Zurich, Switzerland

Of course, it wouldn’t be a trip to Italy with one last train fiasco. I arrived at the station in Como to find that every train was listed as “cancelled”. Every train except for one, which happened to be mine. The reason for the cancellation of trains was again due to people on the tracks, AKA a “sciopero”, or strike. If you’re ever traveling to Italy, you may want to add that word to your vocabulary.

I had managed to avoid being impacted by the sciopero due to my train not being a local service. Had the strike happened on the previous day, my plan of riding the FART would have been impossible.

One thing to note regarding Eurail passes and European trains is that the notion of first class can vary wildly between countries, or even trains within the same country’s services. On my trip, I rode on some trains that were spacious and comfortable, while other trains had first class carriages that were worse than the regular cars I’d seen elsewhere.

I spent the ride from Como to Zurich in a train cabin with 3 to 5 other random people, depending on where we were on the route. The cabins held a total of 6 people. I imagine that if you had exactly that amount of people (or you could book that entire cabin), the train journey would be pretty fun. In practice, I spent the journey wondering if someone’s giant suitcase was going to fall on my head.

For the first half of the journey, there wasn’t snow on the ground. In fact, the snow line was very high in the mountains considering the time of year. Finally, near St. Gotthard, everything changed. 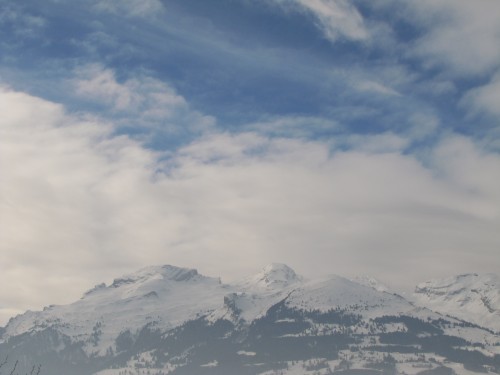 We entered the tunnel with a bit of snow on the ground. By the time we exited at Göschenen 15 km later, the snow was much deeper. I was excited to finally get to see proper snow on my trip, as seeing Europe in winter was one of the reasons why I had chosen this particular journey. Considering I would spend the rest of the trip in the snow and cold, that excitement would wane, but for now I was content.

A quick visit to Zurich, Switzerland

After arriving in Zurich, I headed to my hotel, the Hotel Olympia. It was fine (isn’t that a great hotel review?). I was only there for 2 nights, but regrettably I was a bit outside the center of the town. When I had booked it, I thought it was much closer. It’s easy to get around the city by public transportation, but I didn’t get a great feel of the place. The biggest reason for this was the fact that Zurich is by far the most expensive place I have ever traveled to.

At the time of this trip, I was in between jobs, so I was trying to be frugal with my money. Visiting a place where even a basic pasta dish at a cafe was the equivalent of $25+ was not the smartest idea. I would end up eating many of my meals from the supermarket across the street from my hotel as 1) it was cheap 2) the food was marginally more authentically Swiss than restaurants I saw. For my first meal, I had some sweet pretzel rolls and some kind of German sausage.

Once I’d had a bite to eat, I wandered through the city. It was cold & icy, so I didn’t make it nearly as far as I had hoped. I caught the sunset over Lake Zurich, then headed for dinner. 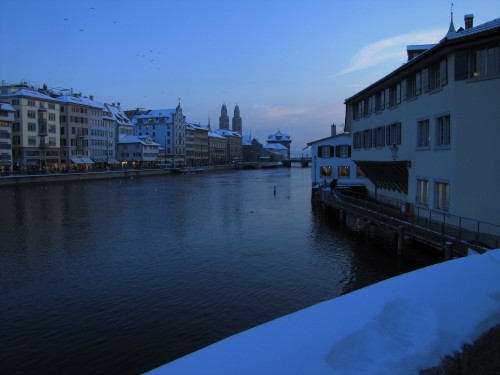 Having had no luck finding a reasonably priced restaurant, I stumbled upon a sausage place called Wurst & Moritz. I had an excellent currywurst with fries and a beer. It only set me back the equivalent of $15 USD, which was a small victory. After a long day of traveling, I headed back to my hotel to rest, which was a great idea considering how my next day would go.