It was supposed to be easy. I left myself plenty of time to walk to Limehouse station, get on the DLR, switch to the Northern Line at Bank, and take it to St. Pancras International to meet my train to Paris.

In practice, it was much less so. I walked to the station and scanned my Oyster card, just to get to the platform in time to see a train for Bank depart. “No big deal,” I figured, there’s another train in a few minutes.

A few minutes go by.

Then another few minutes.

Then a few more.

By this point, I had to make a decision. Continue to wait for a train that might never arrive, or leave the station & hope I could catch a cab to St. Pancras.

Opting for the latter, I scanned out my Oyster card, only to find that they charge you 8 quid if you enter and leave from the station. It doesn’t matter if you did so because no train ever arrived.

I exited the station, of course finding that there were no taxis around. I stood around for a few minutes, not sure what to do, when finally my savior arrived in the form of a black cab. I got to the station with just a few minutes to spare before the end of the check-in time, and everything was fine, aside from having to spend 8 pounds on a nonexistent train journey and then another 18 pounds on a taxi.

The journey itself from London to Paris was uneventful. The Eurostar has definitely lost its luster since it first began operations, though I’m sure they charge way more now. I rode it on my first trip to Europe back in 1997, and I recall it being much nicer, and the idea of going through the Chunnel was much more exciting. The interiors of the trains could definitely use a round of refurbishment, plus it would have been nice if the outside of the train had been washed at any point this millennium so I could see out the windows.

I arrived at Paris Gare du Nord station then took the Metro to Place Monge, where I was staying. I used Airbnb for the first time, which worked out fantastically well. I got a tiny apartment in a fantastic area for far cheaper than hotels would have been in the same neighborhood.

I took a nap when I got to my place, since I hadn’t slept well the night before due to jet lag and having to be up early. That ended up being a huge mistake, since I then ended up sleeping until noon the next day, and my jet lag has lasted nearly a week at this point. I figured I’d have plenty of time on my trip to let it all sort itself out naturally, but between early starts due to travel, and wanting to actually get out and do things rather than be in bed until noon, it hasn’t worked out too well so far. 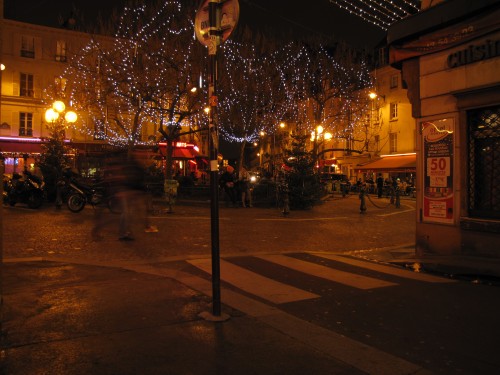 It was dinner time when I woke up, so I got some food on Rue Mouffetard, which was about a block from where I was staying. I decided to go with a stereotypical French meal of escargots, duck confit, and a cheese plate, following St. Anthony Bourdain’s advice of always getting the cheese plate in Paris.

It’s interesting how my palette has expanded since my first trip to Paris when I was 15. Back then, I found most French food to be disgusting, but now I really enjoy it. On one of the first days of that trip, I recall ordering a hamburger in a restaurant. I was presented a bun with a hamburger, plus no other condiments or toppings, aside from the plastic bag the hamburger had been microwaved in, and was in fact still encased in between the bun.

I had a brief conversation with the woman at the table next to me, who was also dining alone.. A bit later, her dinner had arrived. It appeared to be some sort of white, pate-looking French delicacy covered in oil. After a bit of back and forth across our language barrier, I ascertained that this exotic French dish was indeed feta cheese.

Feeling refreshed, I then wandered around the city for a while, walking along the Seine toward Notre Dame, which looks spectacular when it’s all lit up at night. 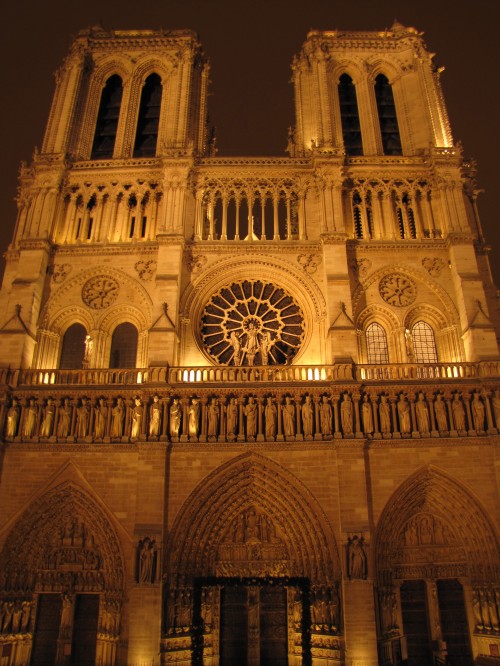 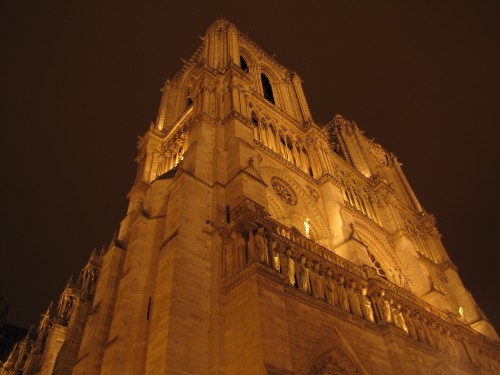 There seemed to be a lot of people walking north of Notre Dame toward some gathering, so I followed. It turned out there was a large outdoor skating rink at the Place de l’Hôtel de Ville. A group of guys was playing a skating game similar to tag, so I stayed and watched a while, as it served as a poor man’s substitute to hockey.

The game probably had an actual name, but seeing as I grew up in Arizona, I have no idea what it would be. I got back to my hotel to find out the NHL lockout had ended that day, so at least I will have real hockey to look forward to upon my return.

Song of the Day The National Fake Empire