Sintra is one of the most popular day trips from Lisbon, and it’s easy to see why. The UNESCO World Heritage Site is home to the beautiful Sintra-Cascais Natural Park & Cabo da Roca, as well several architectural & historical gems, including the Castle of the Moors & Pena National Palace. There was so much to do there that I actually split it up into two separate day trips, since I had already booked an Airbnb for my entire stay in Lisbon. On my second day trip to Sintra from Lisbon, I went to Sintra-Cascais Natural Park & Cabo da Roca.

How to get to Sintra from Lisbon

There is a combination ticket for the whole Sintra & Cascais area that is €15 for the whole day. Since I knew that I would be taking the train to Sintra, then the bus all over Sintra-Cascais Natural Park to the coast, then eventually taking the train back to Lisbon from Cascais, I figured it would be easier to just buy that. I thought I’d be smart and buy the ticket from a machine a day ahead of time, since there had been huge queues at the ticket machines on the day I had taken my previous day trip to Sintra.

Except, you can only buy the ticket for the day of. I found this out the hard way when I bought a ticket and saw the date on it. I then had to go to the ticket window where a guy was nice enough to give me a refund. Then when I went to buy my ticket on the day of my trip to Sintra-Cascais Natural Park & Cabo da Roca there was no line at all, so I spent all that extra time waiting in lines for absolutely nothing.

To top it all off, trains from Lisbon to Cascais were only running hourly. I had just missed the previous train, so I had to wait almost an hour. This is where I remind myself to always check train schedules ahead of time & don’t assume that a popular tourist destination would still have reasonably frequent public transportation all weekend long. I consoled myself with pastries from the train station cafe.

My goal for the day was to see as much of the coastline of Sintra-Cascais Natural Park as possible. I particularly wanted to see Cabo da Roca, the westernmost point in continental Europe. There is a bus that runs this route between Sintra & Cascais. Unfortunately, the bus is not timed well, and thus departs right as the train from Lisbon arrives. I had to wait 30 minutes longer for the next one. Once the route started, I then found out that I could have gotten off the train a stop sooner because the bus also passes that station. This would have saved me 30 minutes of time.

My first stop was at Almoçageme. It’s a nice little town a couple of kilometers inland from the coast. The bus doesn’t go any closer, so I got off there and walked the rest of the way to Praia da Adraga. 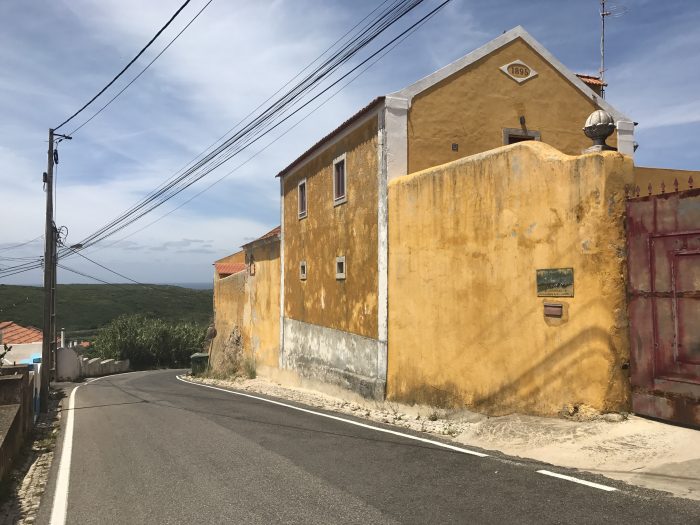 Praia da Adraga is a lovely beach surrounded by cliffs & rock formations. This stretch of the Portuguese coast is pounded by the Atlantic, making for a fantastic landscape. It is dotted with occasional beaches & restaurants specializing in seafood. Although I chose to explore Sintra-Cascais Natural Park on foot and by public transportation, your options are a lot wider if you have a car. 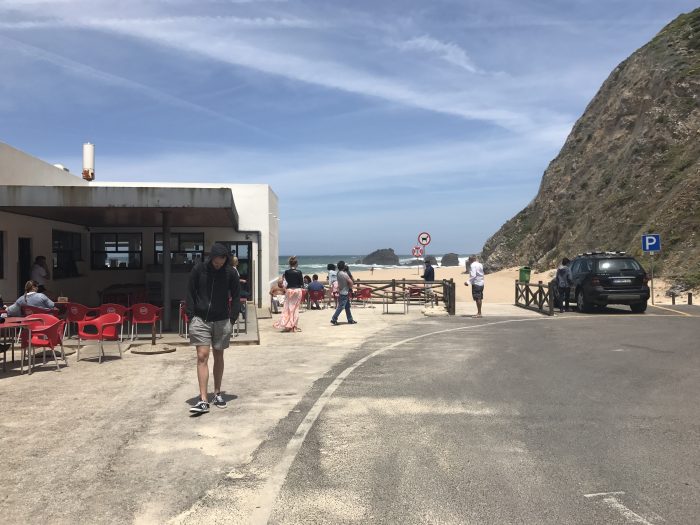 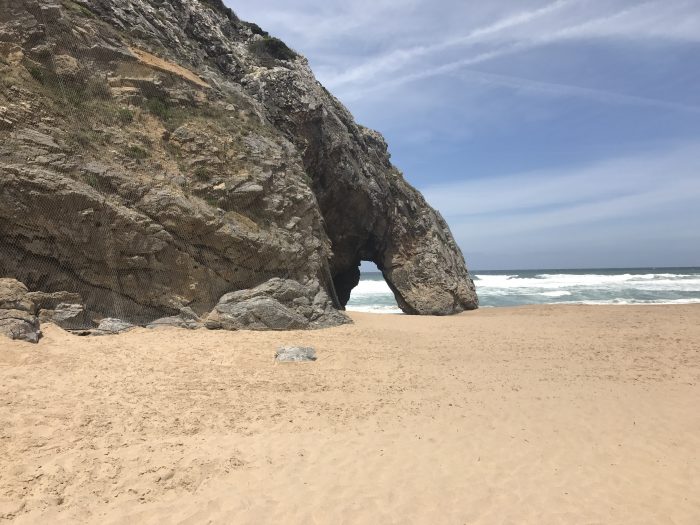 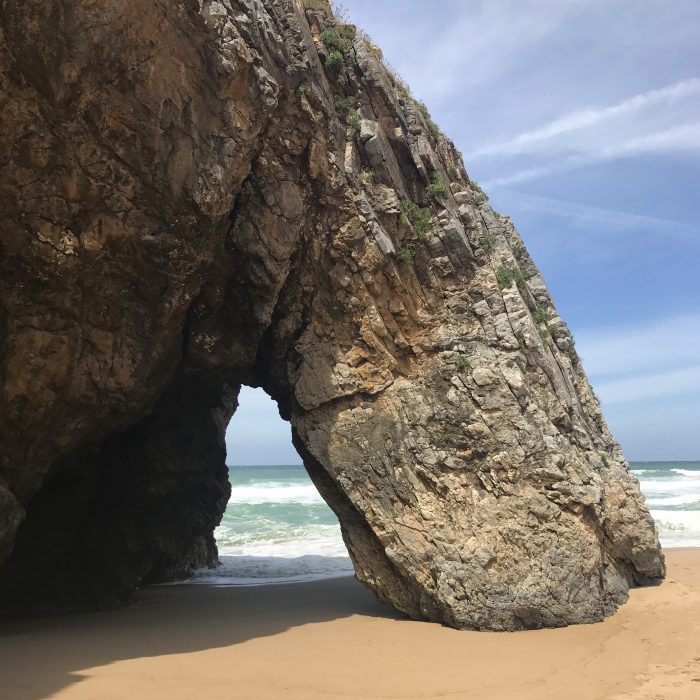 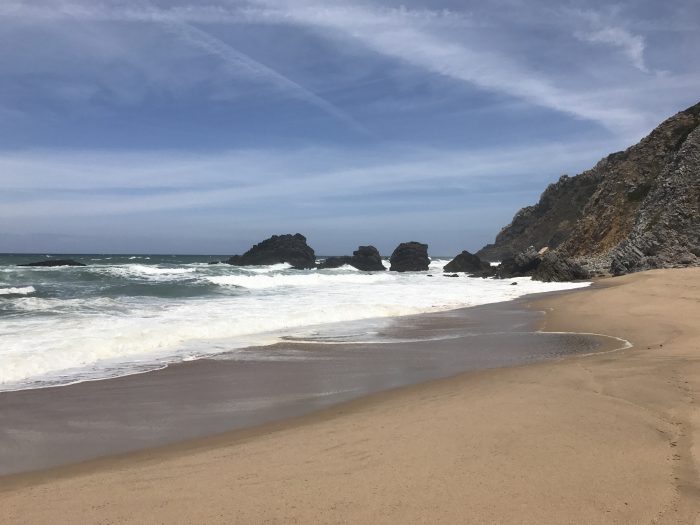 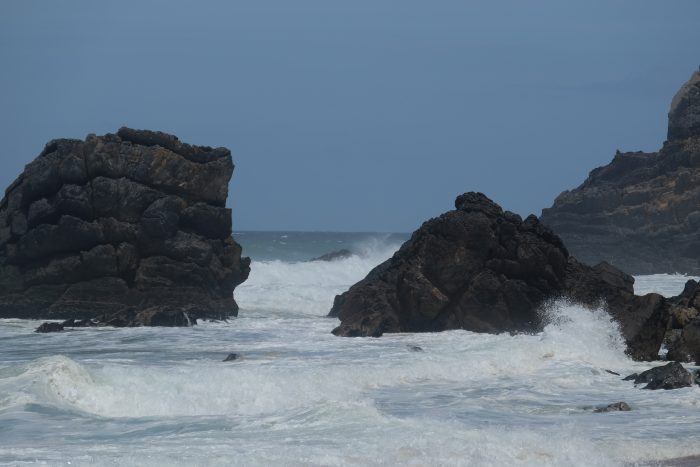 My plan for the afternoon was to walk from Praia da Adraga to Cabo da Roca. I figured that since it’s a beautiful coastline that there would be a nice path. In practice, it’s more complicated than that. Thanks to the cliffs, and the rising & falling hills, there’s not a direct route. To begin, I had to backtrack past the Praia da Adraga parking lot, then follow Caminho do Vale dos Lirios. 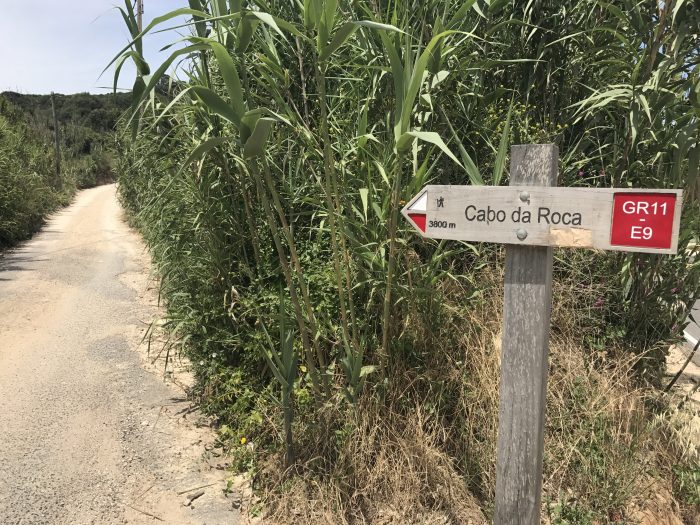 I followed the path as well as I could, stopping at overlooks such as the Miradouro Praia do Carneiro. The views were outstanding. It was a windy, but sunny day. 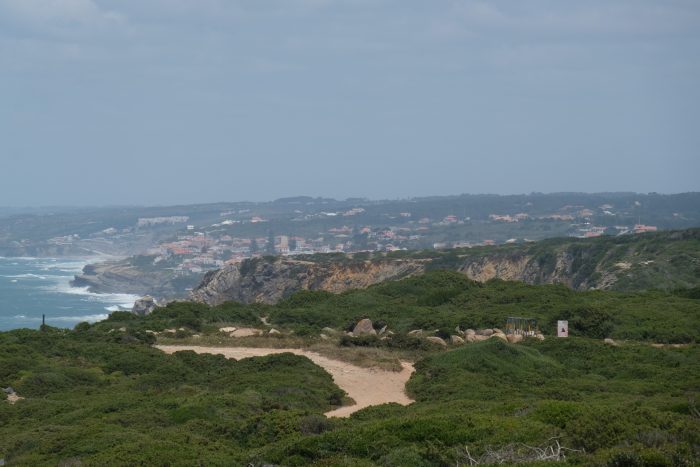 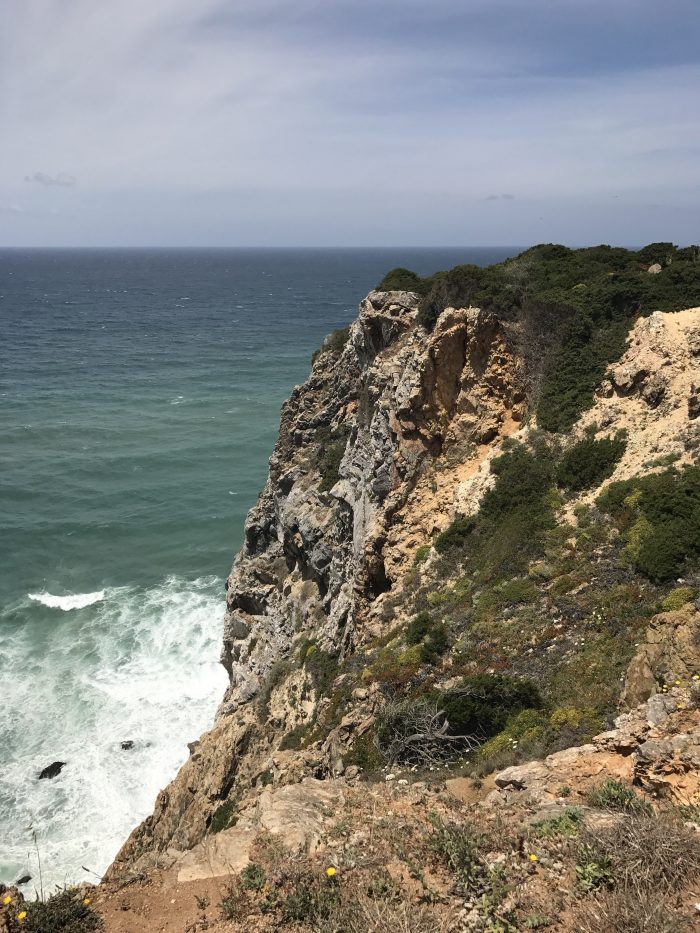 From there, I continued along well-worn path toward Praia da Ursa. I followed a little turnoff labeled Buraco do Fojo Ramal. At the cliff’s edge, I could see even more of the jagged rock formations along the coast, including all the way down to Cabo da Roca. There was a man fishing off of the cliff. 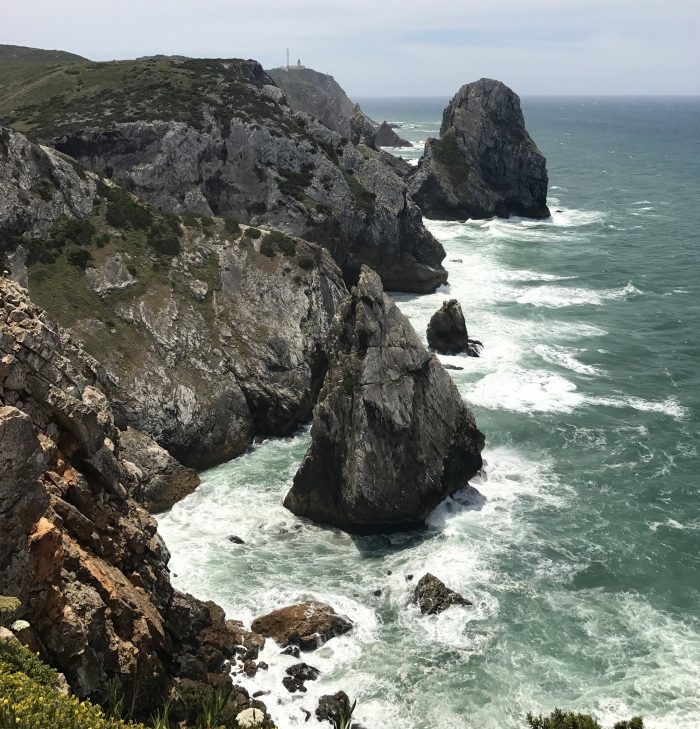 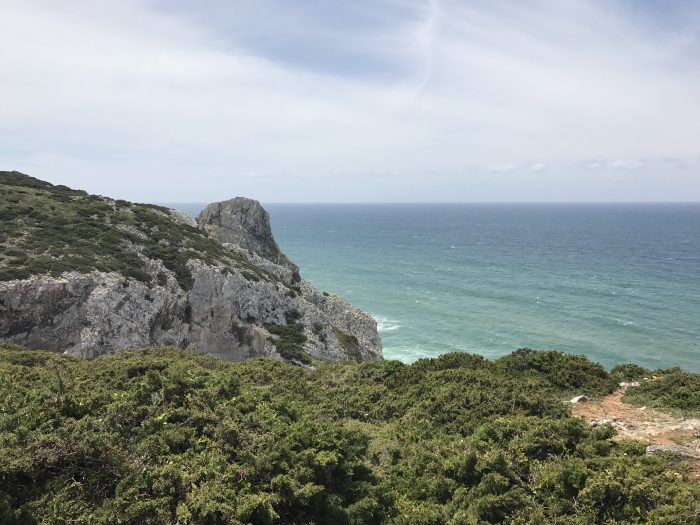 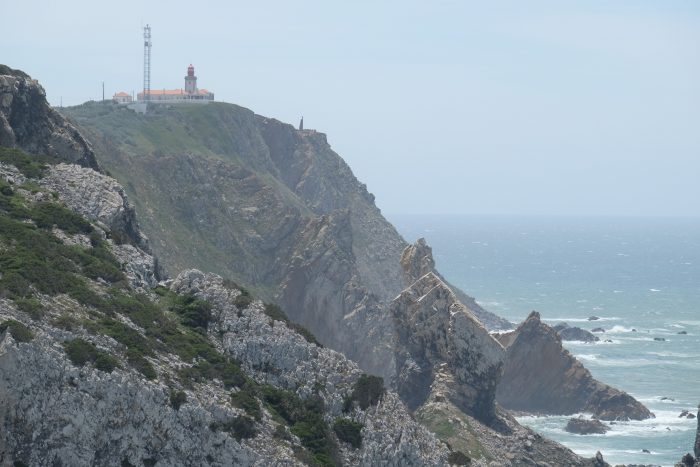 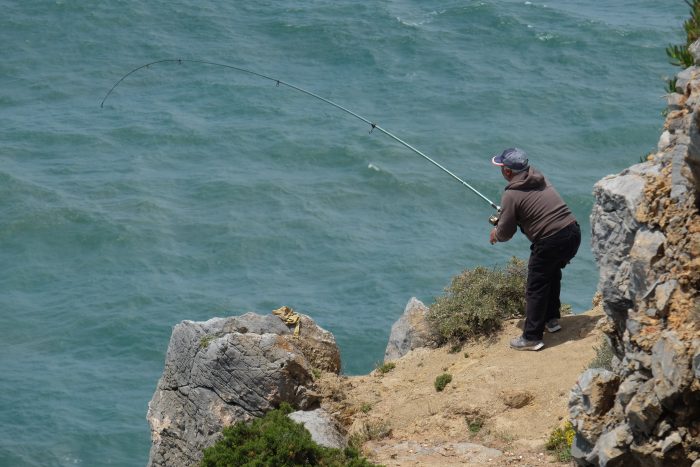 It was here that I eventually reached what looked far too much like a dead end for me to want to continue. In some places in Sintra-Cascais Natural Park there is a marked path with occasional signs. In others, the markings will disappear, leaving you with a path worn by previous hikers. Even this disappears. The path became almost nothing, and the only way forward along the coast was down a steep hill. I scanned the landscape for an obvious reappearance of the trail, but saw nothing close. Since I was hiking alone and there was nobody nearby, I opted to be cautious. I instead followed a path I saw that curved back to the road along the ridge line. 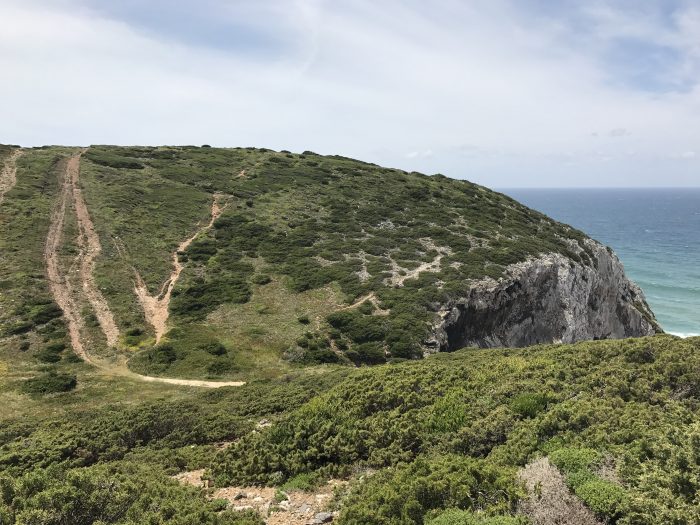 This dirt road along the coast is pretty far inland, so I no longer had a particularly nice view, nor was there a cooling sea breeze. The road is popular with mountain bikers. It’s a shame that there isn’t a proper path that follows the coast. I don’t know if it’s due to unsafe cliffs or a lack of interest or money, but given that there does seem to be at least some demand for people to walk through this beautiful scenery, it would be nice to not feel like the only option is to wander off trail. 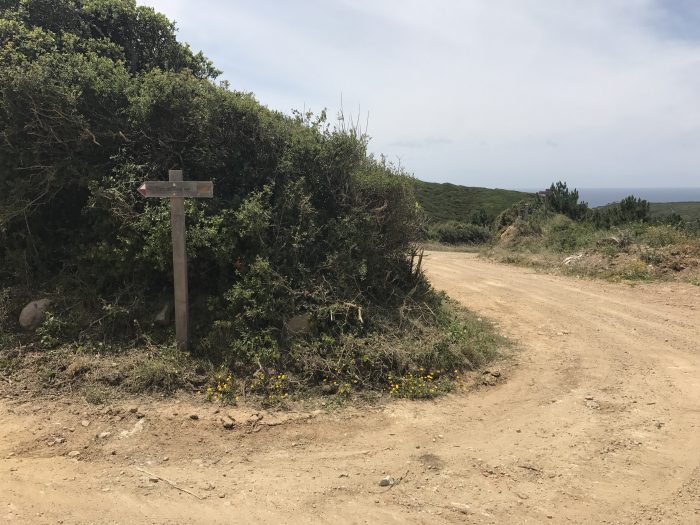 I continued to the south, finally arriving at the road that takes people to the lighthouse & Cabo da Roca.

It was time for a break, so I headed into the restaurant next to the cliffs. As luck would have it, I was then mobbed by groups from tour buses that arrived just after me. That part is fine, but some of the people in the groups didn’t understand queues or chose to ignore them, causing arguments with everyone else who was in line. This is one problem with huge tour groups. They get put on timetables where they think they are more important than everyone else who was there first. 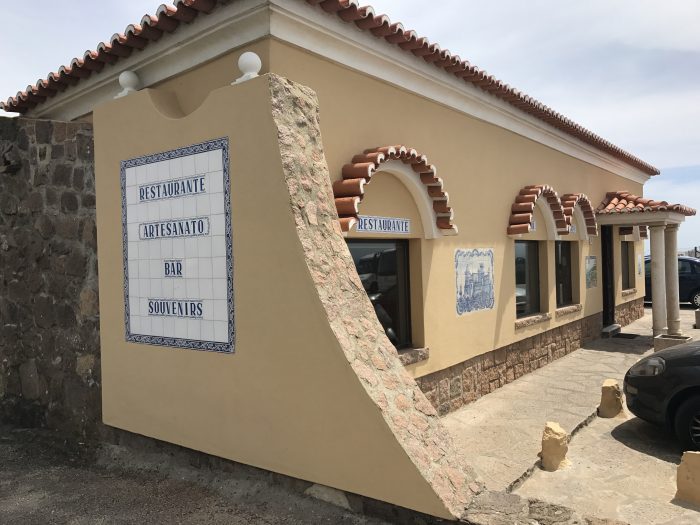 Refreshed, it was time to explore Cabo da Roca. As you would expect for a piece of land that juts off into the ocean, it was gorgeous. The waves of the North Atlantic are constantly pounding it, resulting in tall cliffs all around you. 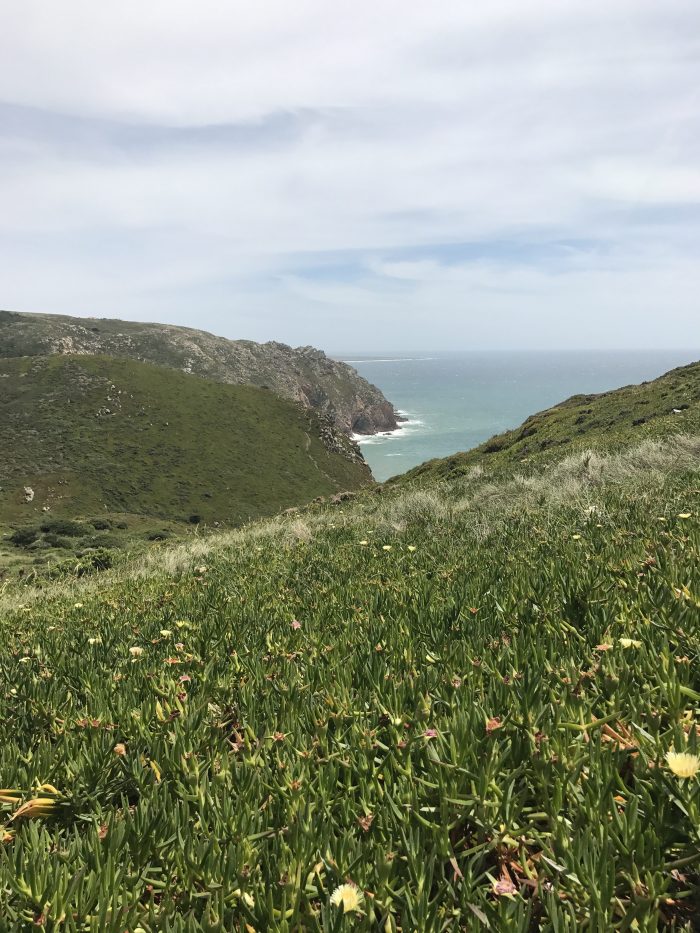 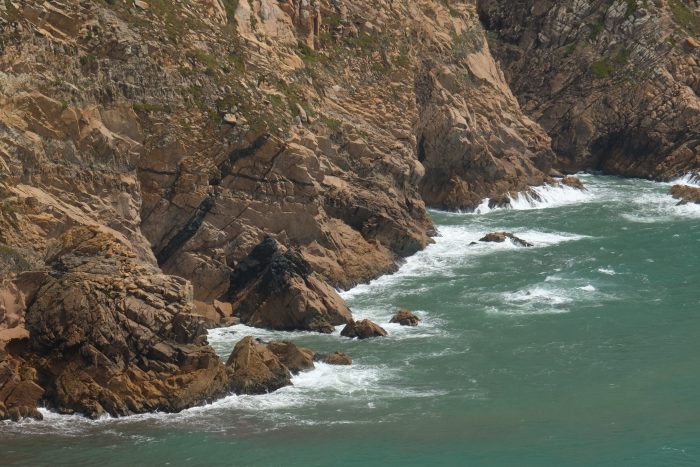 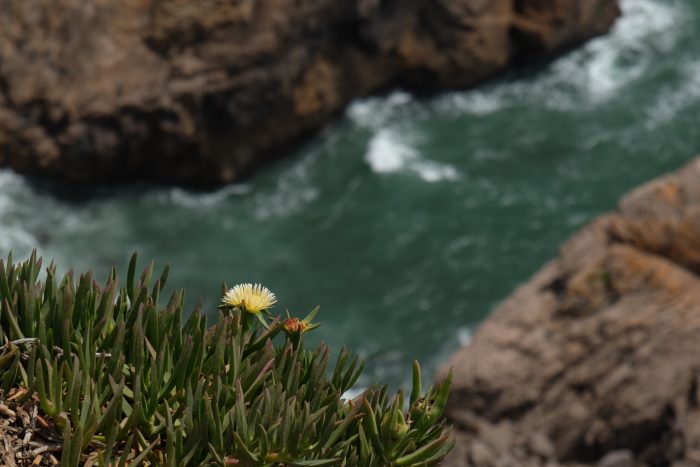 It’s a windy and crowded place, plus there are of course steep cliffs, so be careful. I witnessed a couple of people who were far more adventurous than they should have been in their quest to get the perfect selfie. 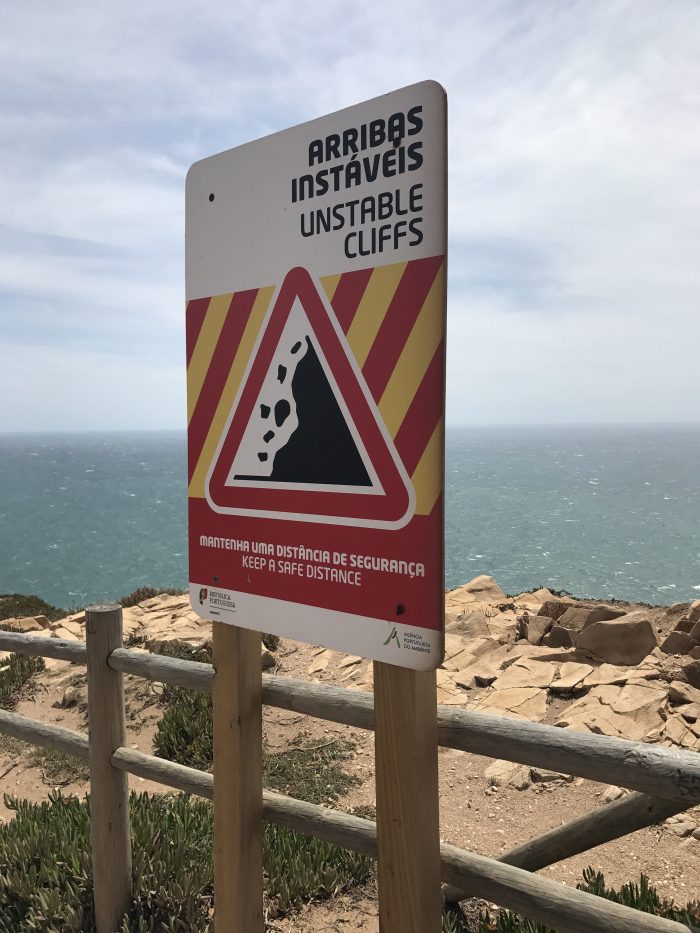 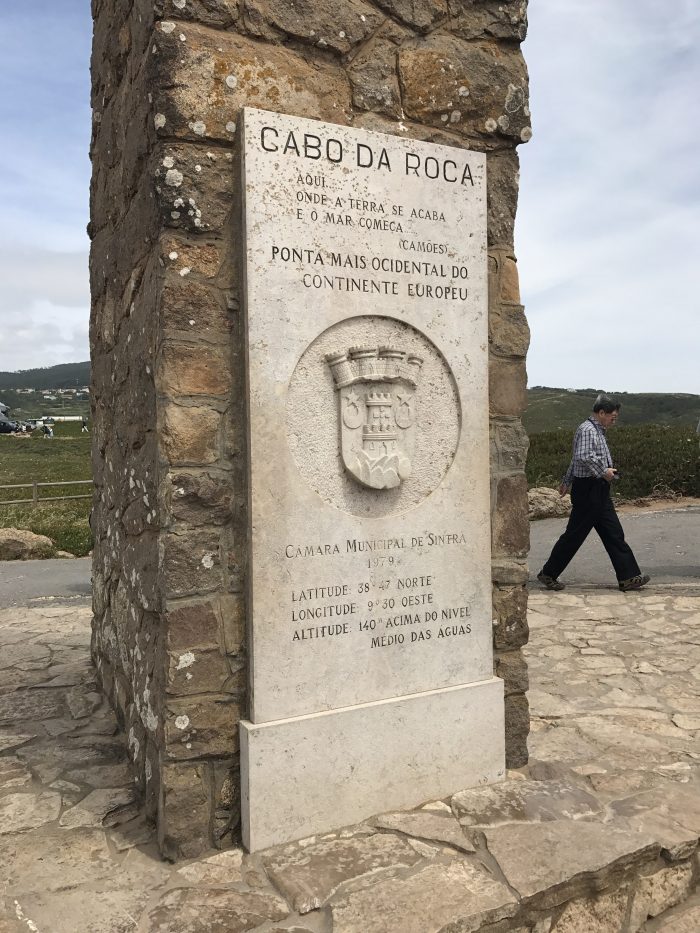 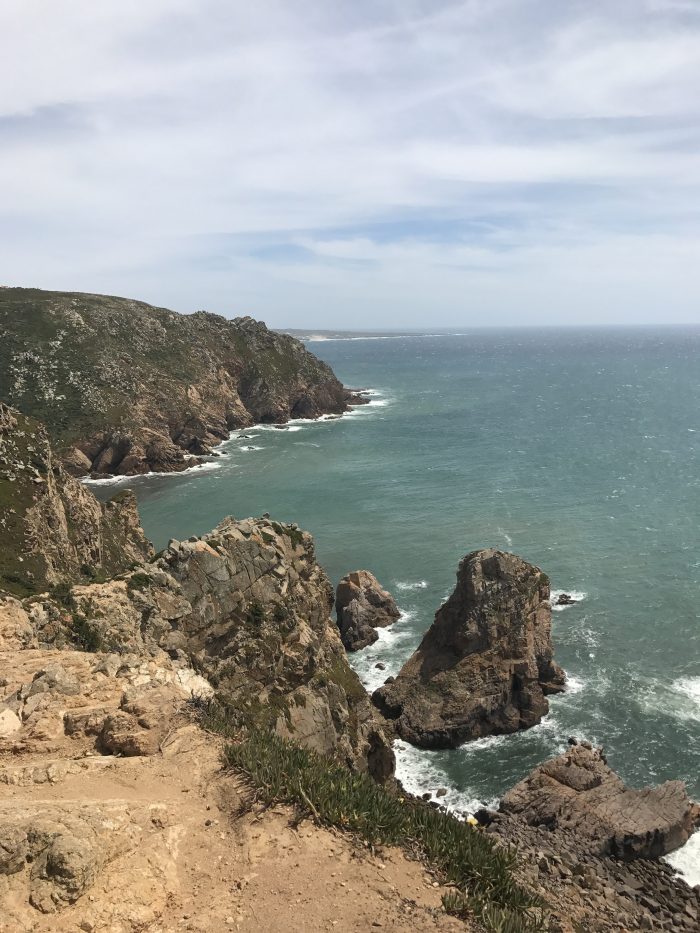 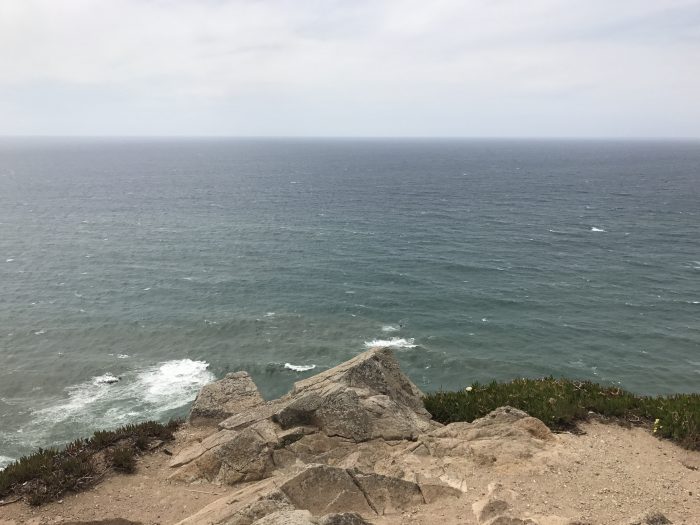 There’s also a lighthouse overlooking the sea, which makes sense in this landscape. 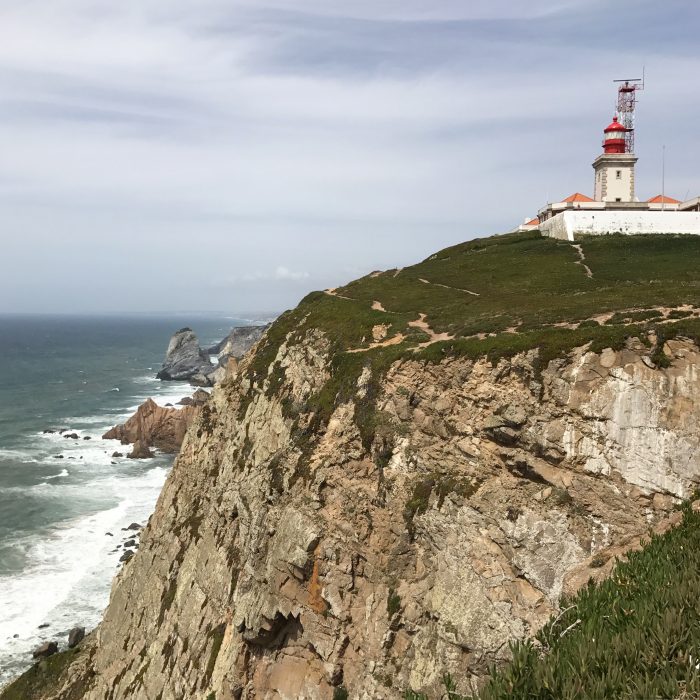 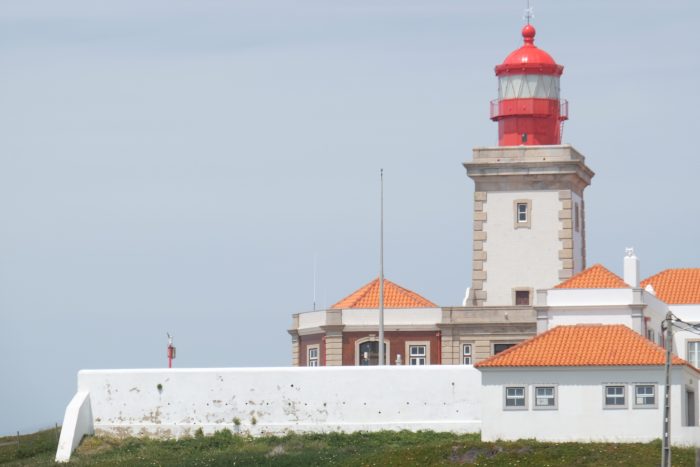 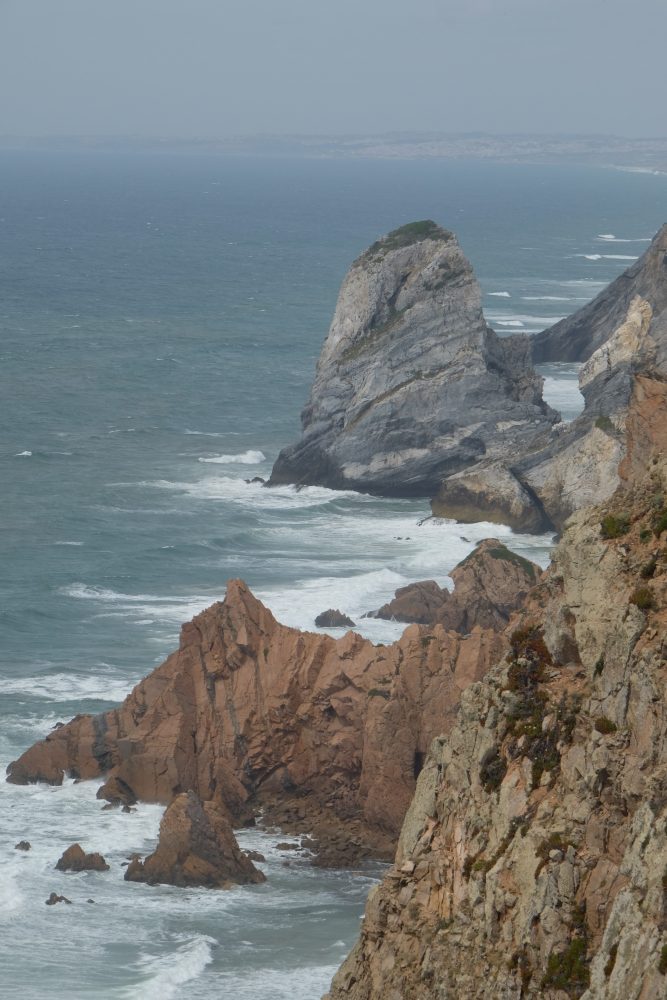 After admiring the view for a while, I got on the next bus from Cabo da Roca to Cascais. I still had the rest of the evening ahead of me, and I wanted to spend it drinking craft beer in Cascais.

Despite Cabo da Roca being a major tourist destination in Sintra-Cascais Natural Park, it’s still nice to check out. That said, the rest of the cliff walks to the north are just as pretty, and they are far less crowded. Of course, then you’re not quite at the westernmost point in Europe. Whichever parts you decide to explore, a day trip to Sintra isn’t complete without getting out of the town and visiting Sintra-Cascais Natural Park & Cabo da Roca. 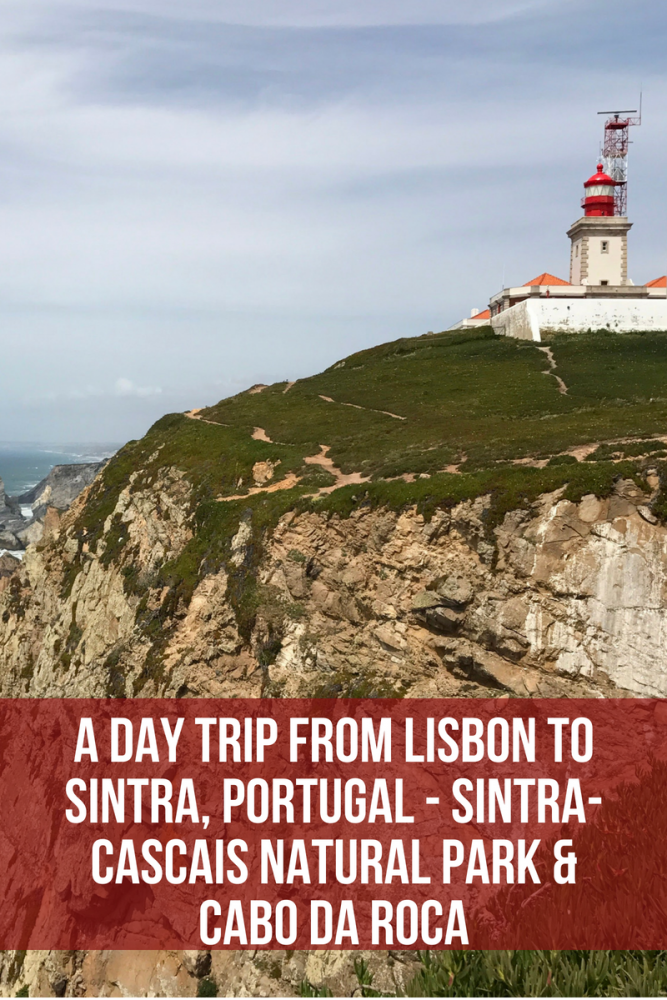