Getting from Garmish-Partenkirchen to Innsbruck

Innsbruck is about 1 hour, 30 minutes away from Garmisch-Partenkirchen. As you’d expect, most of the rail trip was spent winding through Alpine mountains and valleys. At one point I spotted a noteworthy animal running through the forest. Yes, I saw a doe, a deer, a female deer within 15 minutes of having been in Austria.

The value of the Innsbruck Card

Upon arriving in Innsbruck for my day trip, I headed to the Innsbruck Tourismus visitor information center. This wouldn’t always be my first stop, but the tourist office there offers a deal that can save you a lot of money if you’re visiting the city. It’s called the Innsbruck Card.

The Innsbruck Card is a pass that gets you access to a variety of attractions in the region. If you’re planning on visiting several of them, then the card makes for great savings. The card is offered for 24 hours (€ 33), 48 hours (€ 41) and 72 hours (€ 47).

Here’s a list of what you get access to with the Innsbruck Card. I’ve highlighted what I did that day, along with the price, to illustrate how I saved €16.50:

I was only in Innsbruck for about 8 hours, so I only got to do a small portion of everything on this list. If you were there for 2 or 3 days, you could get to a lot more. The €29.50 price of the cable car to the very top of the mountains above the city alone almost makes it worth getting.

Getting up into the mountains of Innsbruck

That train and cable car journey was my first stop of the day trip to Innsbruck from Garmisch-Partenkirchen. The weather was even warmer than the previous day, so I wanted to escape the heat by getting as high up into the mountains as possible. 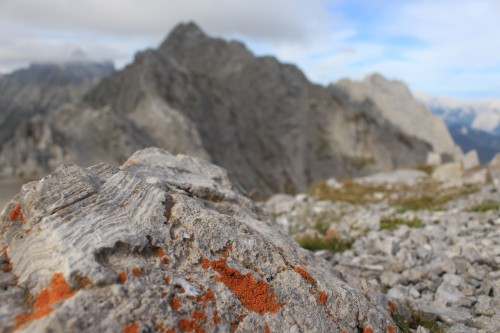 The journey up to the top of Hafelekarspitze starts at Congress, which is a short walk from the tourist information center, then continues via funicular railway and 2 cable cars. You can get break up the journey any way you want, though given my experience with crowds the previous day, I decided to head straight to the summit so I could then make stops on the way down.

When I got to Hafelekar, I was treated to 2 disparate views depending on which way I faced. To the south and below me was the city of Innsbruck and the surrounding valleys. Looking north, the view was comprised of rugged alpine terrain. 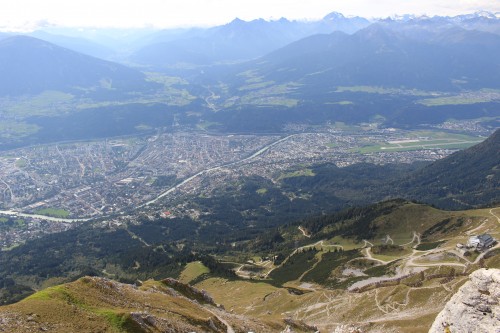 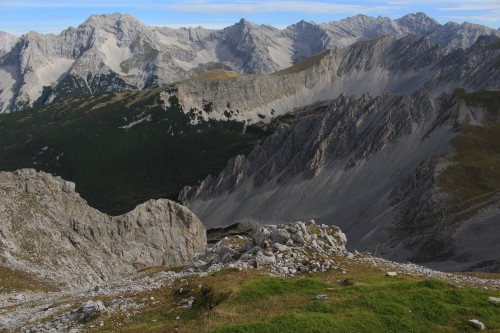 The cable car doesn’t quite take you to the very top, so I opted to hike up the rest of the way to get an even better view.

After spending about an hour at the top, I took the cable car down one stop to Seegrube. Seegrube had a bit more to offer, including a restaurant. By this point it was lunch time, so I had a meat plate and a fantastic dessert called topfenstrudel, which can be best described as a cheesecake pastry.

Visiting the Alpenzoo in Innsbruck

I walked around a bit more, then took the lower cable car down to Hungerburgbahn Station, a small village that sits between the higher stations and Innsbruck. I didn’t much feel like staying there, so I got back on the funicular railway to head to the middle stop of the route, Alpenzoo Innsbruck.

Since the Alpenzoo was included in my Innsbruck Card, I decided to check it out. It’s a fairly small zoo, but it features animals that are native to the Alps. Unfortunately, due to the heat, not many of them were active, but I did get to see a few interesting animals up close.

One of the more unique exhibits featured a vulture that they had given a carcass to eat. It’s one thing to see animals being feed, but you don’t often see them eating the same way they would in the wild.

There was also a surly-looking bear that was pacing around its enclosure. 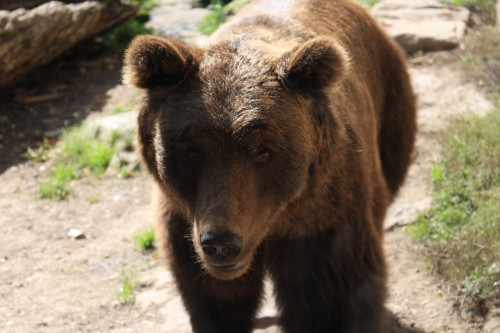 Visiting the Palaces & Churches of Innsbruck

After exploring the zoo, I headed back down to the city. My first stop was the Kaiserliche Hofburg (Imperial Palace), a former Habsburg palace filled with gaudy decor and furniture. Honestly, that particuar style of interior design doesn’t impress me much. I got yelled at for taking some photos since I didn’t see the sign saying no photos. I’ve never understood why it’s an issue if I’m not using a flash, unless they want to sell postcards of incredibly ugly furniture. I went through it in about half an hour, then moved on.

Next door is Dom zu St. Jakob. First, I had some gelato since it was so warm, then I went inside.

The church was empty when I first got there, so I was able to take some photos.

Unfortunately, about 5 minutes after I entered, a huge tour group arrived. I can deal with places being a consistent level of crowded, but I dislike when a massive group marches into a place with no regard to the experience of everyone else who may be around. At one point, I actually had the tour group completely surround me thanks to their guide deciding to stand right next to me as I was looking up at the ceiling & taking photographs. 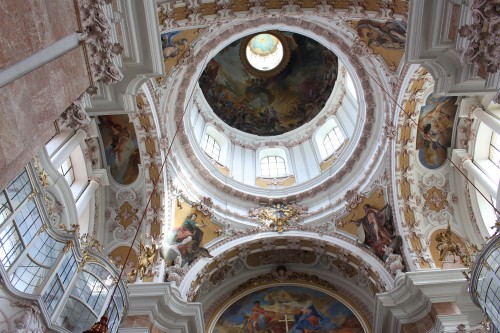 The group was gone within 10 minutes. Now this wasn’t the biggest cathedral, and it’s not like I stayed there forever myself, but I can’t imagine that this particular tour was very much fun if they were being rushed in and out of places so quickly. I get that it’s convenient to book a tour when you travel, but if you’re debating it, keep things like this in mind. If you like having zero control over your schedule, then by all means book a tour, but if you don’t like being herded like cattle, explore on your own!

I’d considered staying in Innsbruck for dinner, but I was getting tired, and I knew that I’d have a long day on Saturday, so I headed back to Garmisch-Partenkirchen, had a nice quiet dinner at a local Italian place called Colosseo, and called it a night. If you’re looking for something a little bit different on your trip to Bavaria, a day trip to Innsbruck from Garmisch-Partenkirchen makes for a nice day out.