About an hour west of Bordeaux is one of the more unique natural wonders you’ll see in France, or even all of Europe. Just south of the town of Arcachon is the Dune du Pilat, the tallest sand dune in Europe. The close proximity of the coast makes a day trip from Bordeaux to Dune du Pilat very easy. 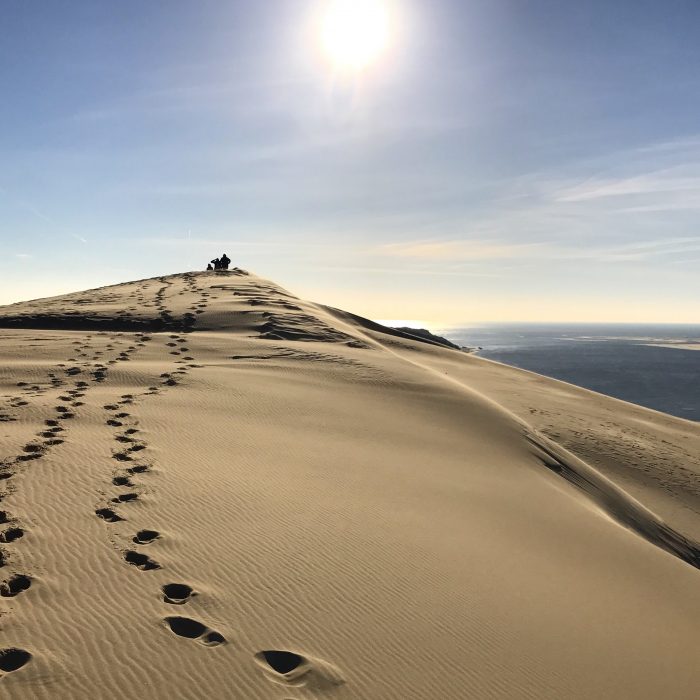 I got a late start after doing some work, but the short distance meant I still had plenty of time. I took a 12:38 train from Bordeaux to Arcachon. The ride costs €8.50 and takes just 38 minutes if you take a TGV train. The day was clear, although cold.

After arriving at Arcachon, the next step of the journey to Dune du Pilat is by bus. Bus Route 1 leaves from the road outside of the Arcachon train station. The bus is €1 each way and takes about 30 minutes to get to the dune. Along the way there were shops and restaurants, though almost all of them were closed due to it being a weekday in January. I got there around 2pm, which wasn’t bad considering my late start. I would still have a few hours left to explore.

The bus stop is about a 15 minute walk from the Dune du Pilat. In between, you pass through a parking lot as well as a campsite. There’s also an information center & some shops, but those were closed. The shady ground was frosty. It didn’t seem quite cold enough for that, but with the dune shielding the ground, this area doesn’t get a lot of sun during the winter. There are also a couple of signs that provide information about the geology & history of the dune. 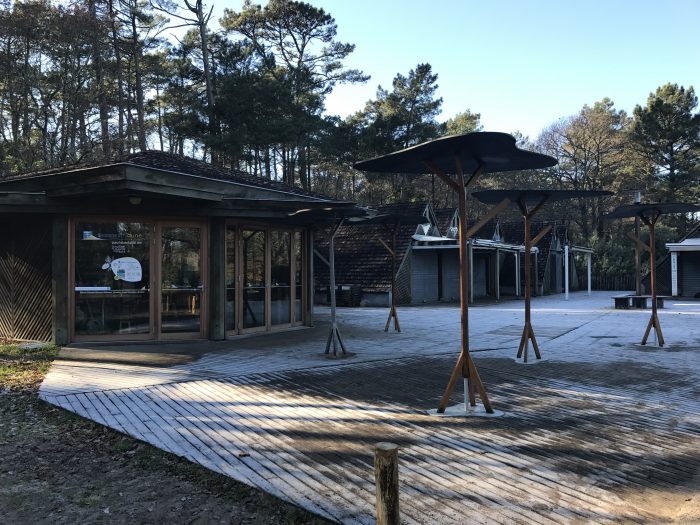 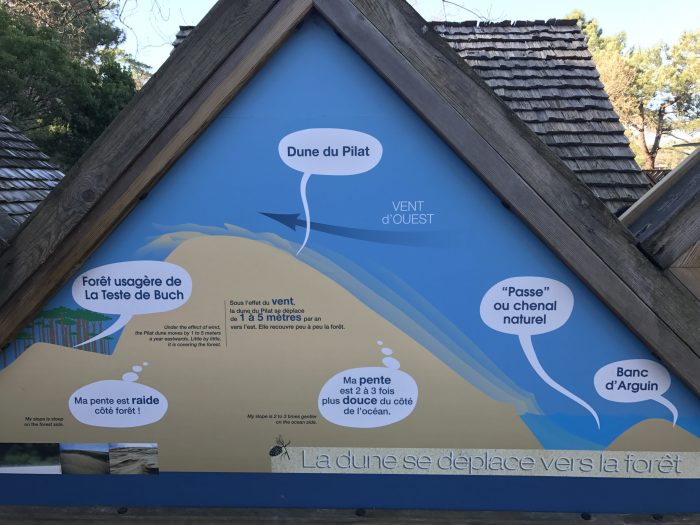 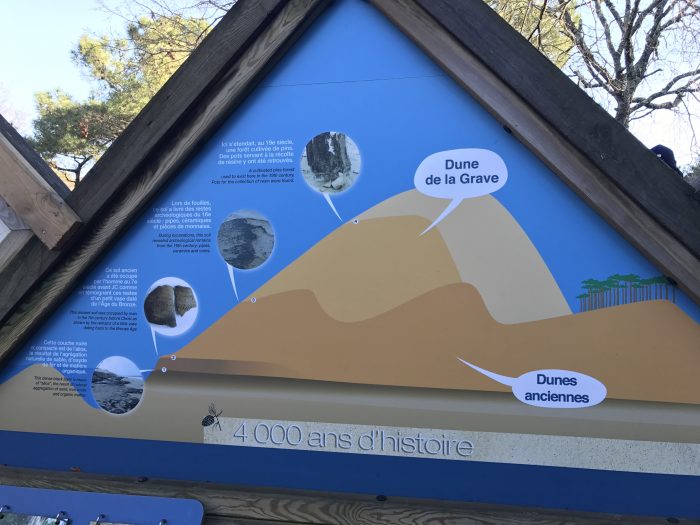 If you don’t want to figure out how to get from Bordeaux to Dune du Pilat yourself, check out these local day tours.

The Dune du Pilat towers above the Atlantic Coast, with a beach on one side, and forest on the other. The dune is 100 meters high, and runs 2.7 km from north to south. The sands here have been building up for thousands of years as sand gets pushed by the wind toward the east. The Dune du Pilat is actually moving eastward at a rate of a few meters per year, covering up whatever happens to be in its way as the coast drives it inland.

The top of the dune isn’t too hard to access provided you’re in reasonable shape. There is a staircase on one side, but on the land side, there’s a gradual path winding its way upward through the sand. If this was regular ground it would be no trouble, but the nature of sand adds to the difficulty. 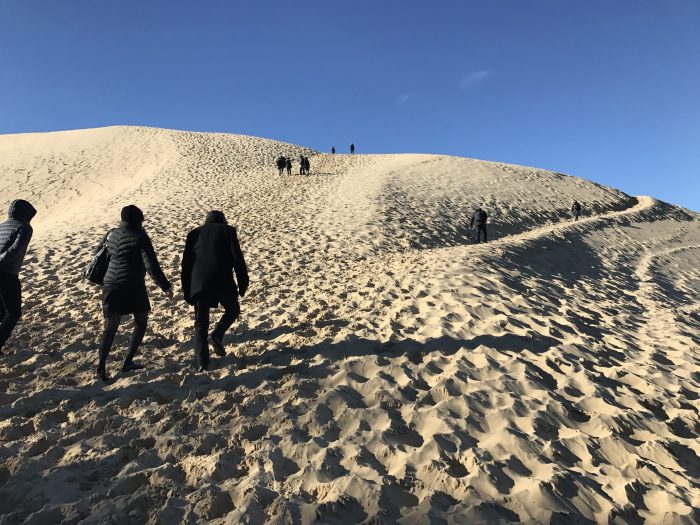 Once at the top, you’re treated to a spectacular view. To the west, you are looking down the dune toward the beach, then across the entrance of Arcachon Bay to the Atlantic Ocean. 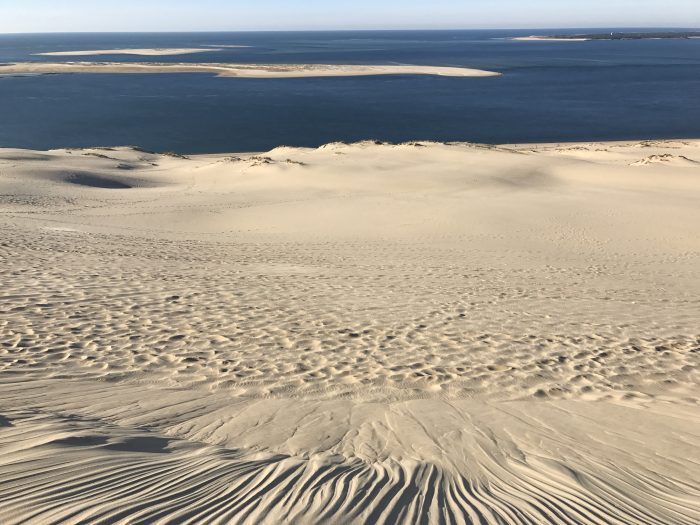 Looking back eastward, the steepest side of the dune drops into forest. 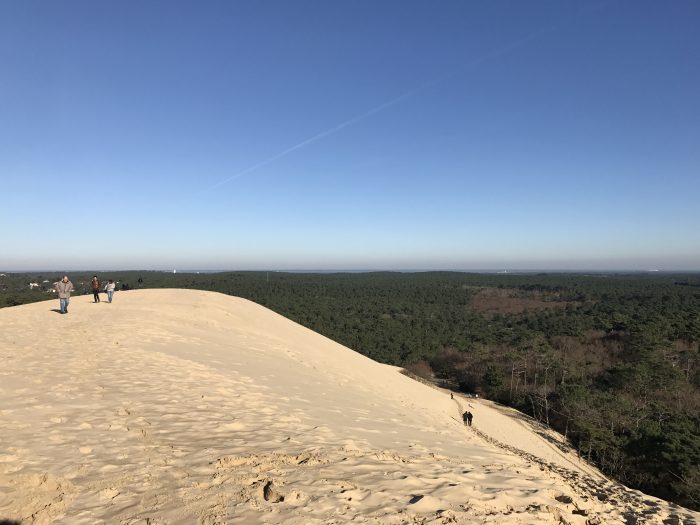 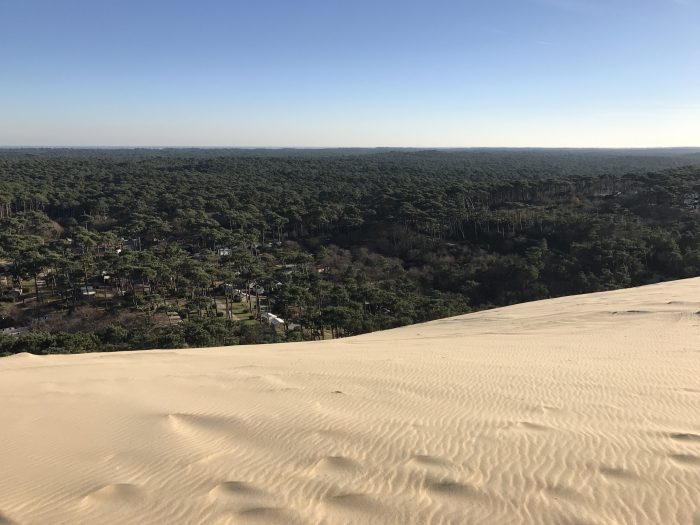 To the south, the Dune du Pilat continues. There are a couple of peaks to the dune. The first one is where most people go to, but if you head to the 2nd one to the south, it’s much less crowded.

Wanting to see as much of the dune as possible, I made my way to the south peak. It was slow going, thanks to the fine, powdery sand. The sand is constantly moving around you in the wind. There’s something refreshing about visiting a place that is constantly moving around you. It gives you perspective on the passage of time, knowing it will never be exactly the same again. 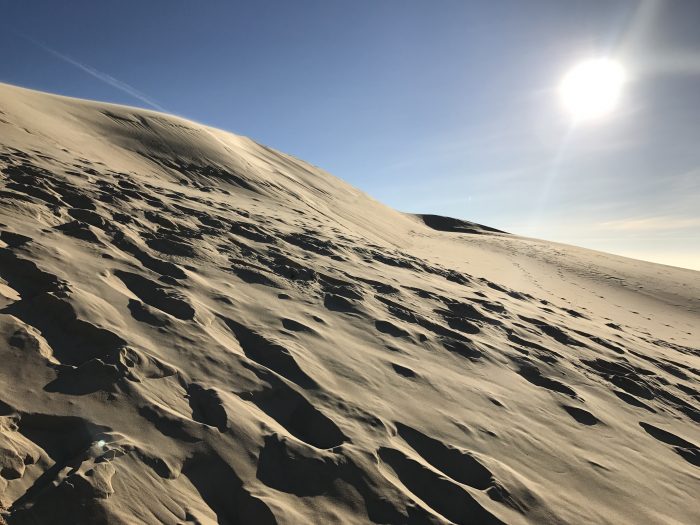 The Dune du Pilat feels more like you’re in the deserts of Africa or the Middle East rather than in France. A dune like this would be normal in some places, but in this coastal setting, so close to forests & cities, this random sand dune feels like it’s on another planet. 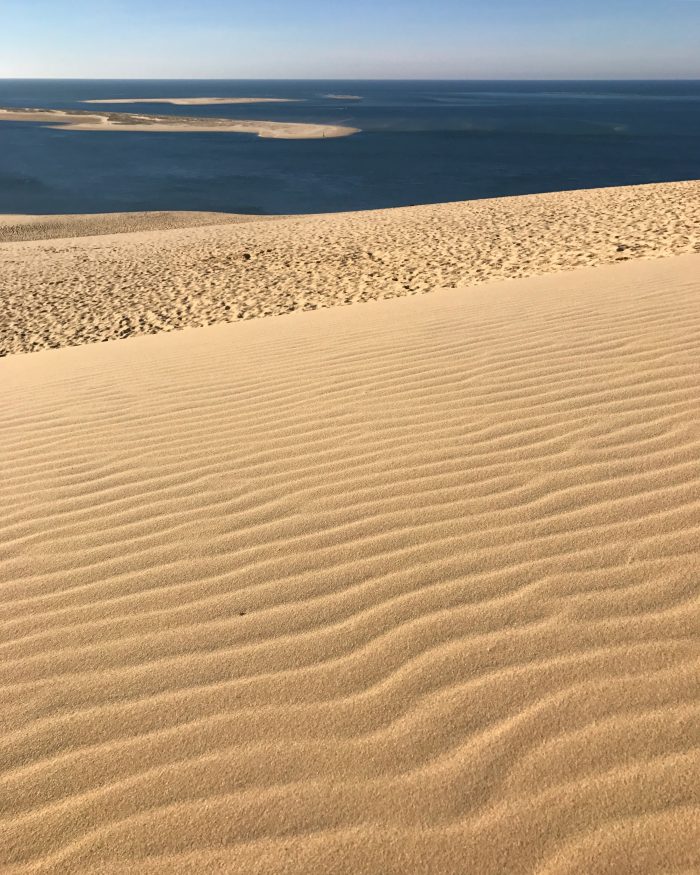 After making my way to the southern peak of the sand dune, I then headed downhill toward the beach. It’s fairly steep going, but at the same time the sand is forgiving (unless you go for a tumble, which I thankfully avoided). As I walked/slid my way down the Dune du Pilat, I could feel my shoes filling with sand. When I got back to the Aparthotel Adagio Bordeaux Gambetta

later that evening, this was all the sand that I had brought back in them. 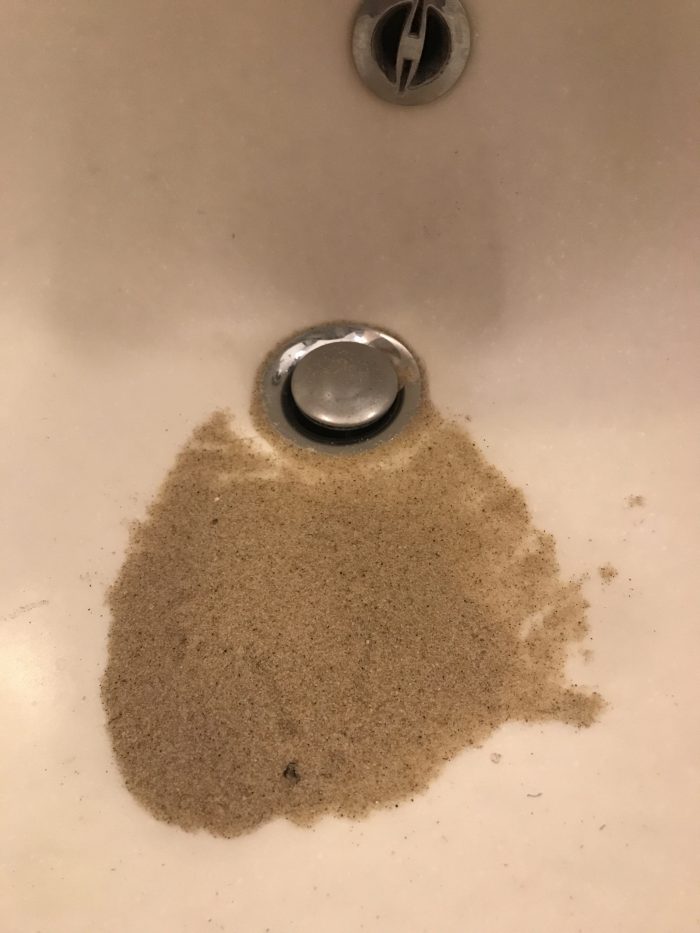 As I looked back up to the crest of the dune, I noticed the moon rising above. Note the tiny people at the very top. Photos can’t convey just how massive the Dune du Pilat is. It’s truly a natural wonder that you have to see in person in order to get a sense of its scale. 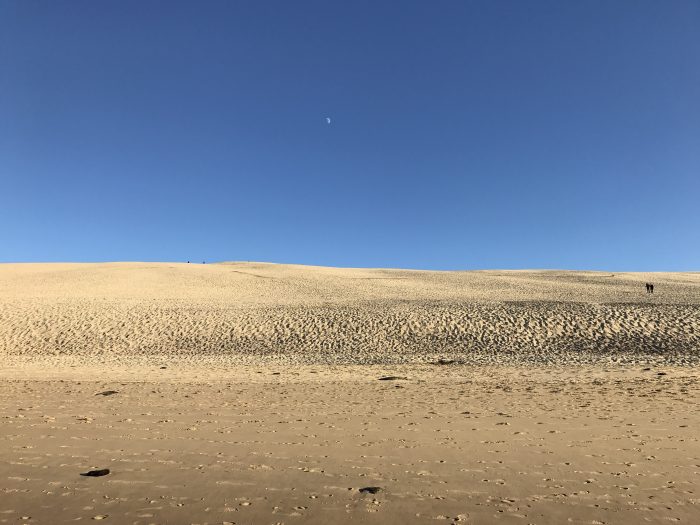 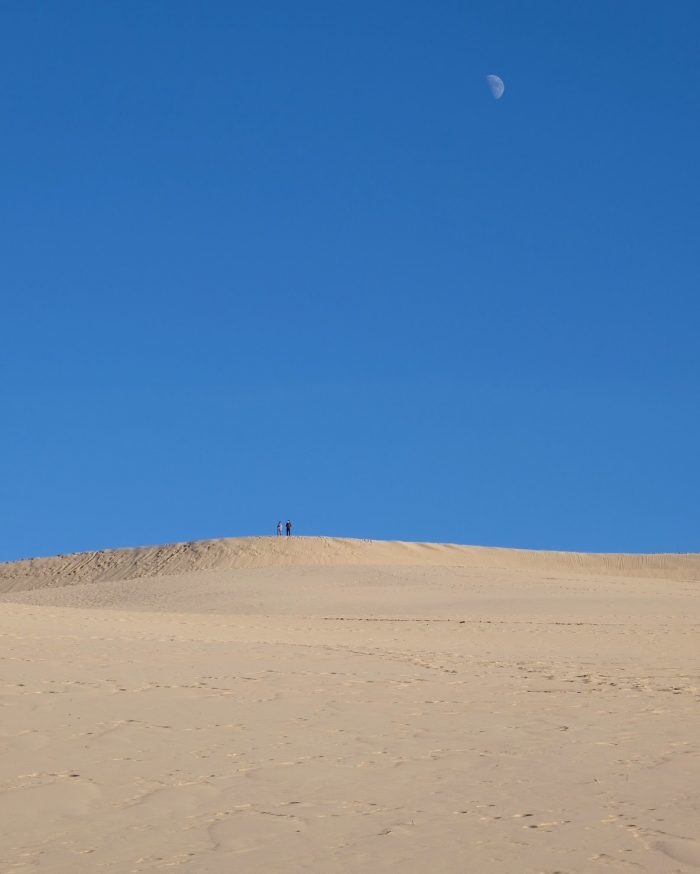 Down on the beach, I started to walk back toward Arcachon. The beach is a continuous stretch along the coast. 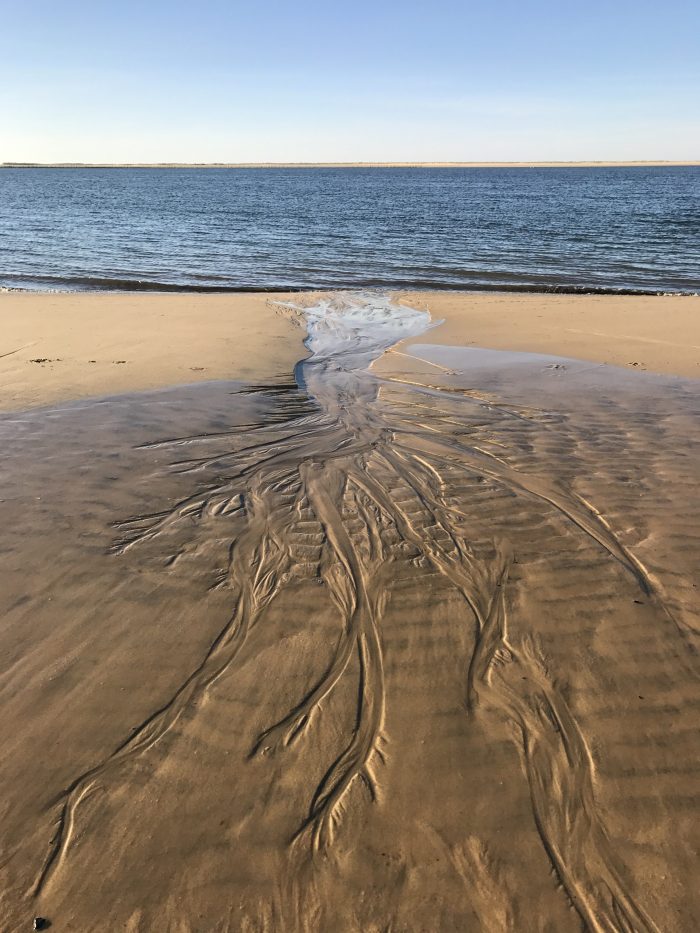 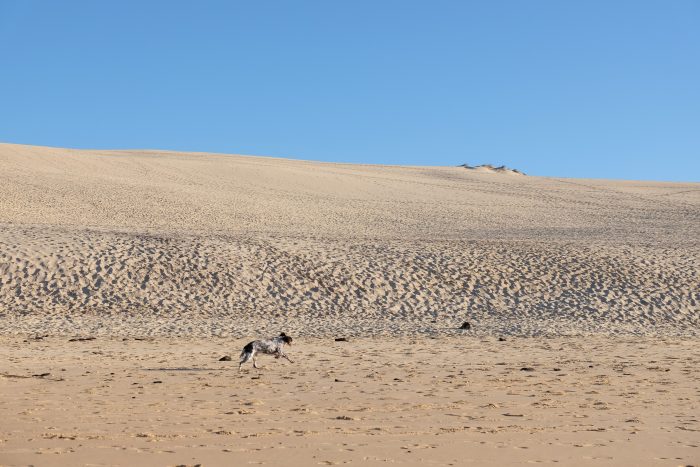 The whole walk back is about 10 kilometers, which should take about 2 hours. Then again, this walk is across a sandy beach, so depending on the state of the sand, it could take longer. There are also several jetties to cross. Thanks to these being surrounded by rocks & slippery sections, crossing them isn’t quite as easy as you’d think. Alternatively, you can walk up the hill to the coastal road & walk along it or take the bus back to Arcachon.

I opted to walk along the beach. Where I could follow the tide line, the sand was packed hard, almost like concrete. Above me were beach houses with private gates leading down to the beach. Despite it being a cold day, it was sunny, and there were plenty of people out walking. During the summers, this beach must be packed. 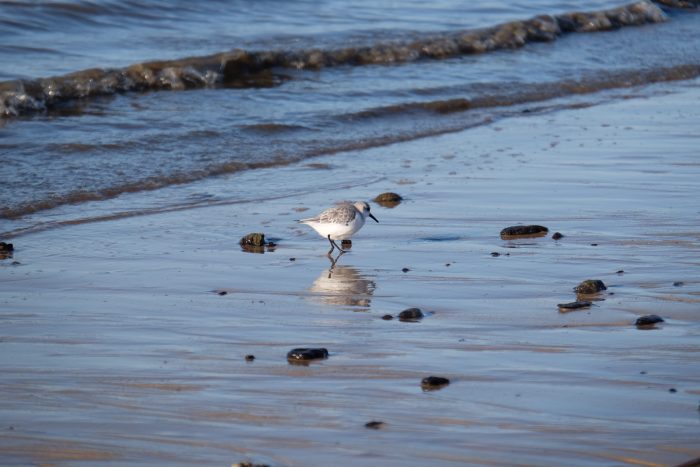 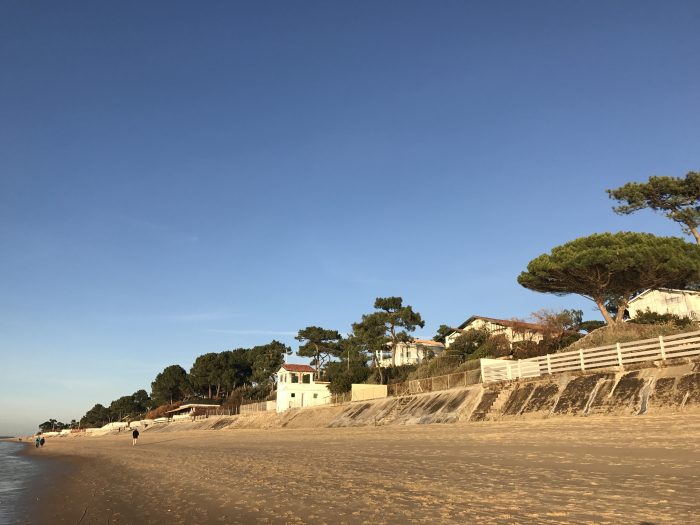 I followed the beach toward Arcachon until I came to Moulleau Pier. I decided I’d had enough walking on sand for the day. Between that, the sun beginning to set, and still having to walk about 45 minutes more if I wanted to walk all the way back to the Arcachon train station, I headed to the road & took a bus back. 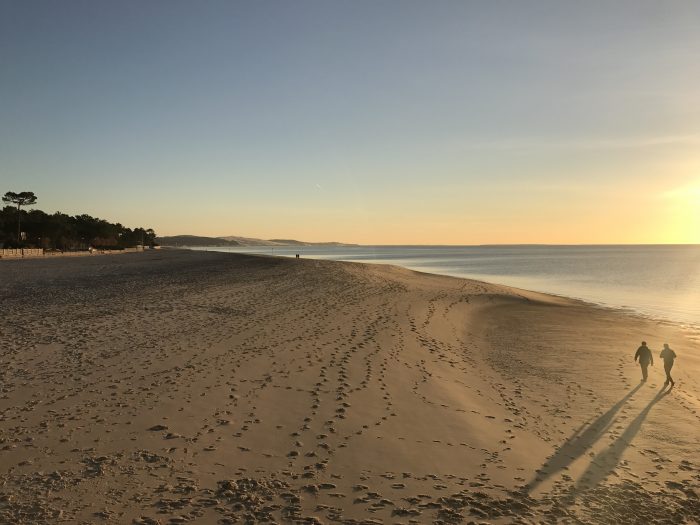 I got back to Arcachon in time for a train that was leaving in 15 minutes. This one was more expensive (€11.50), and actually took longer since it was a local train. The ticket prices are on the steep side for this being less than an hour away from Bordeaux.

I considered staying in Arcachon for dinner, but I needed to get back and do some work. The town looked pretty dead, but there were still some places that were open. Arcachon is known for its seafood, especially the local oyster farms.

If you’re looking to get away from the city, the quick day trip from Bordeaux to Dune du Pilat & Arcachon is a unique way to explore the outdoors. The Dune du Pilat is like nothing you’ve ever seen in Europe, making it a special spot to visit.