Craft beer is growing in popularity in New Zealand, and nowhere is that more visible than in the capital, Wellington. The city is fairly small, with a compact CBD, making it easy for drinkers to get around on foot. Within a few blocks of my hotel there were at least a dozen great places to drink awesome beer, making it one of the most densely beer-populated cities in the world. I tried to get to as many as I could, but even then, there were plenty of bars that I missed. Here is my guide to the best places to drink craft beer in Wellington, the craft beer capital of New Zealand.

Little Beer Quarter was my first beer stop in Wellington, since it was right around the corner from my hotel. Like many good bars, it was located in an alleyway. 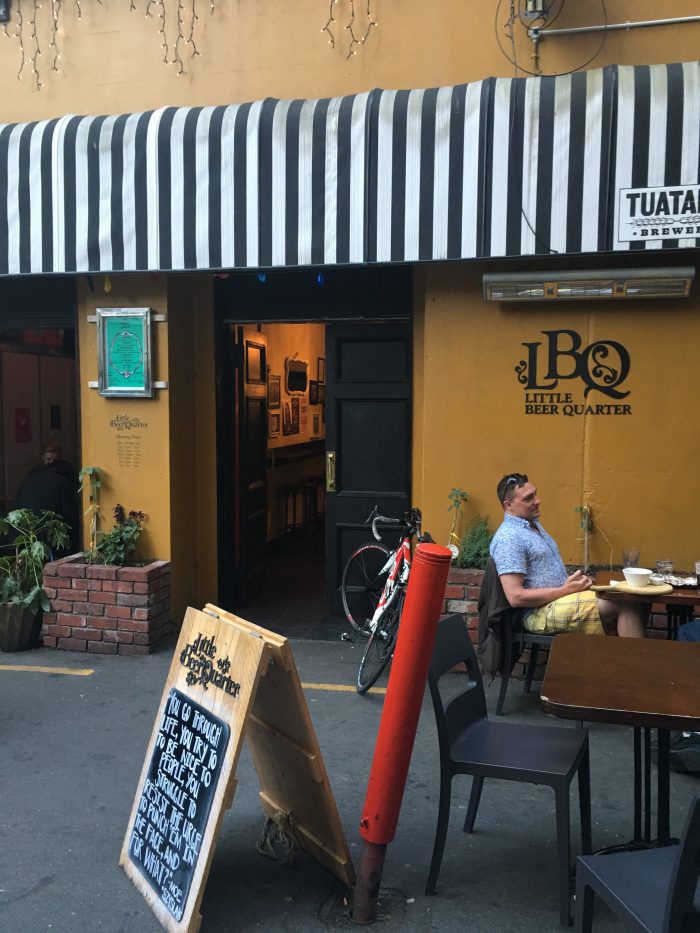 I visited a couple of times. It’s a chill spot with great music. The beer selection was nice, with about dozen taps, a couple of hand pulls, and a large bottle selection. 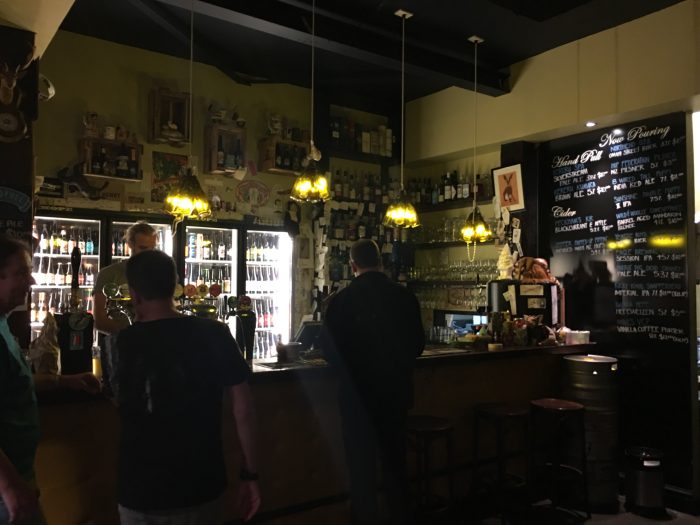 The bar snacks were also good. I recommend the calamari. Little Beer Quarter is a spot for connoisseurs, based on the number of Untappd check-ins I saw. There are a lot of beer geeks here. The bar closed early since it was a Monday night, otherwise I would have stayed even longer on my first visit, but that just let me try new places.

Hashigo Zake is another craft beer bar that I visited a couple of times during my time in Wellington. The bar is a major beer destination, featuring a mix of New Zealand, American, and Japanese beers. 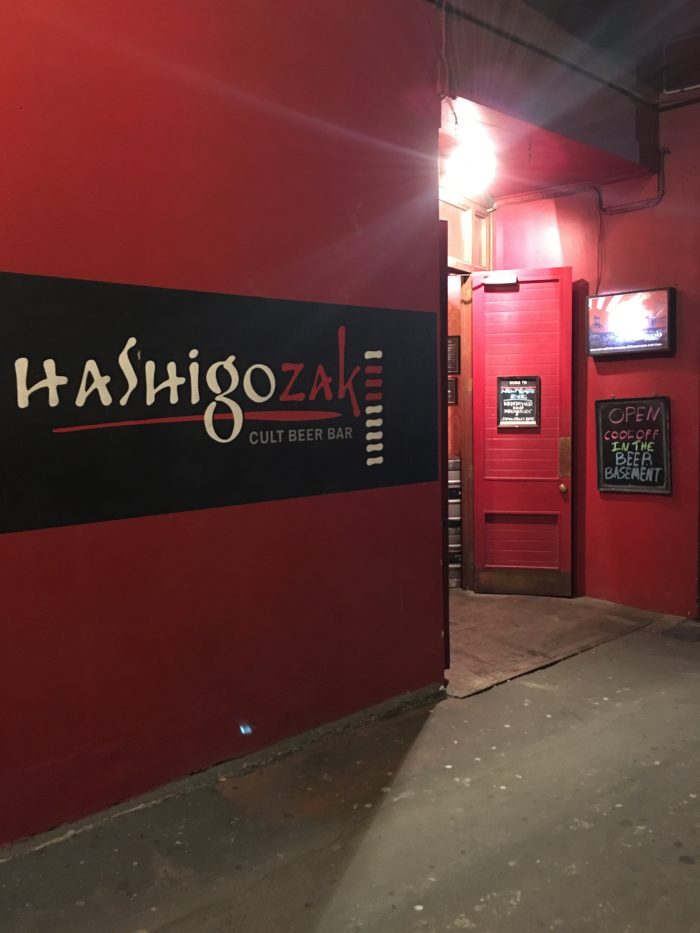 Hashigo Zake call themselves a “cult beer bar”, and they certainly take their beer seriously. There are about a dozen taps, but the true depth is in their bottle selection. 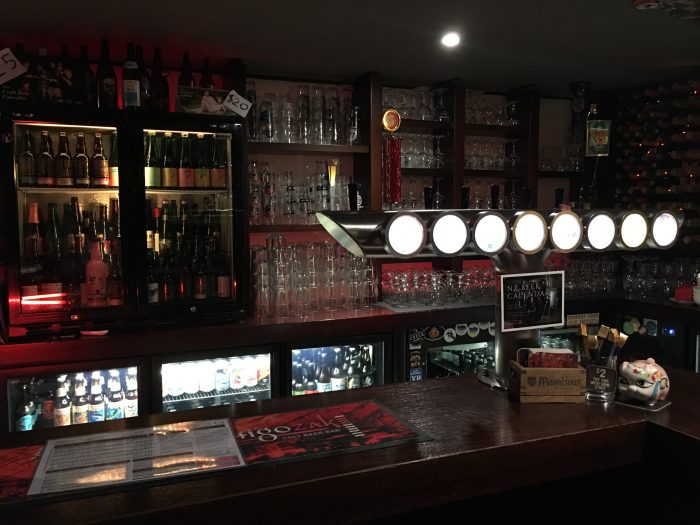 The vibe is cool, with all three cultures melding in one dark basement. The food is a mix of local favorites & Japanese snacks such as takoyaki, which harkened back to my beer drinking times in Tokyo & Kyoto. 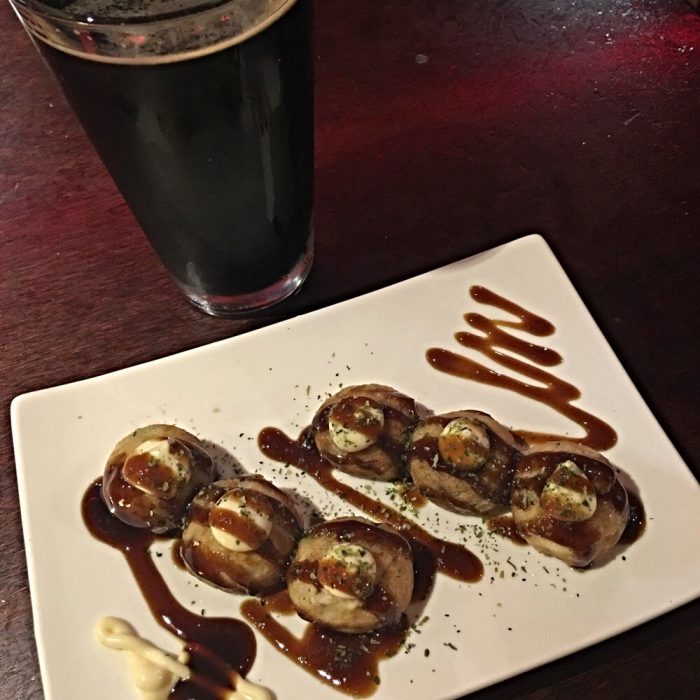 The bar also has the best WiFi I encountered in New Zealand, and they even print the password on the menu, which saves people from having to pester the bartenders. Oh, and in case you were wondering “Hashigo Zake” is a Japanese phrase that roughly means “bar hopping”. A genius name for a genius bar.

The Malthouse is one of the older places to drink craft beer in Wellington, but it hasn’t been left behind, as is what happens with some older bars. 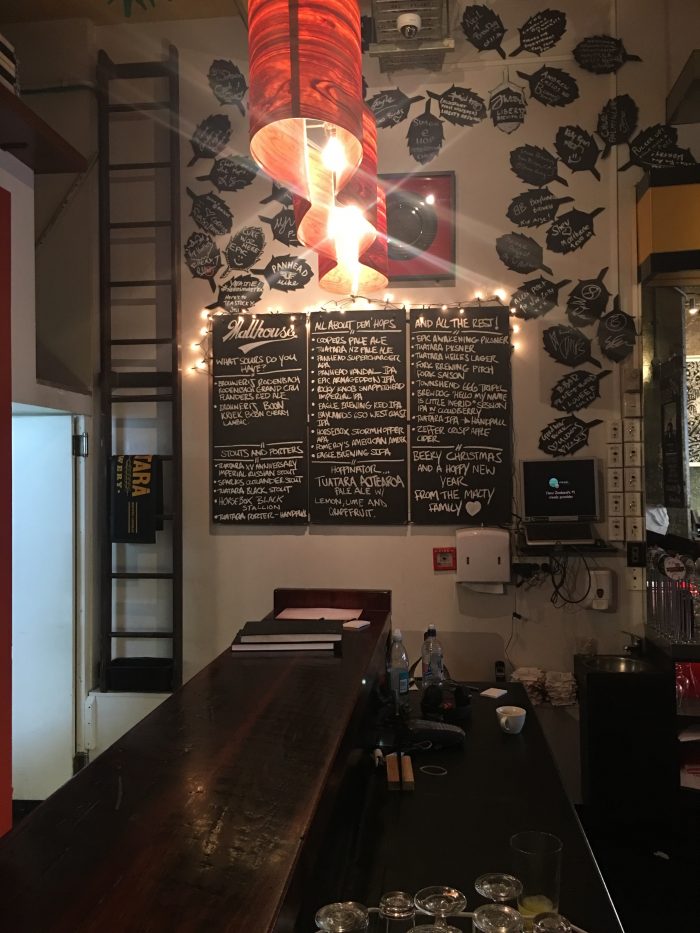 The selection here is simply massive, featuring about 25 taps of the best New Zealand & European beers, plus a huge bottle selection, many of which are difficult to find. I was only able to make it in for a couple of drinks, but I could have easily spent several days at The Malthouse. This is a true gem for local beer fans in Wellington.

Golding’s Free Dive is kind of a dive in both senses of the word. Inside, it’s dark, with a seaside diving theme. 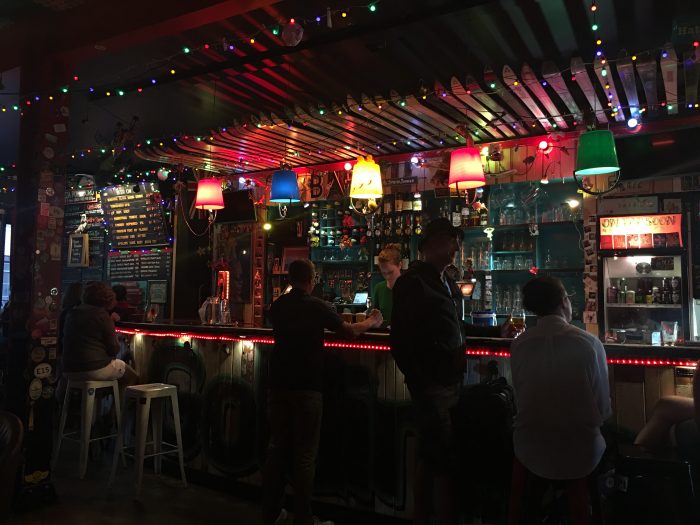 Should you want to enjoy some sunlight, there’s also an outside patio. It’s another bar that is a bit difficult to find down a side street, but once you do, you’ll want to stay a while. 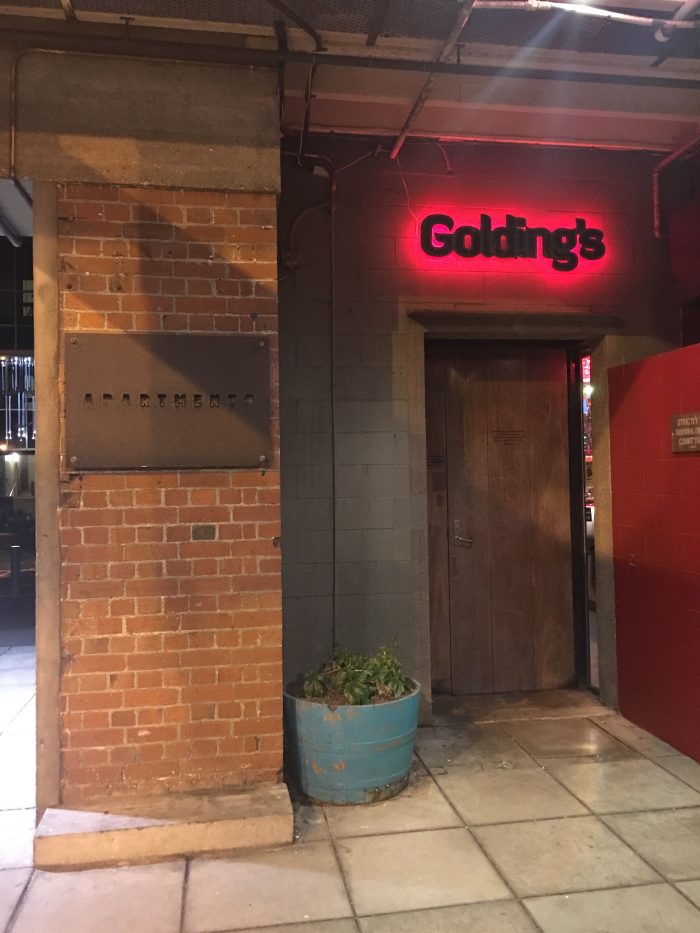 Despite being in the middle of a busy area of Wellington, Golding’s Free Dive manages to maintain a neighborhood feel, featuring both New Zealand & American beers.

Garage Project was the sole brewery that I visited in Wellington, and based on everything else I had to drink during my trip, it was my favorite in New Zealand, which is an impressive feat since there are so many great breweries there. The brewery started in a garage in Wellington’s Aro Valley (just south of the CBD) which you might have surmised by the name. 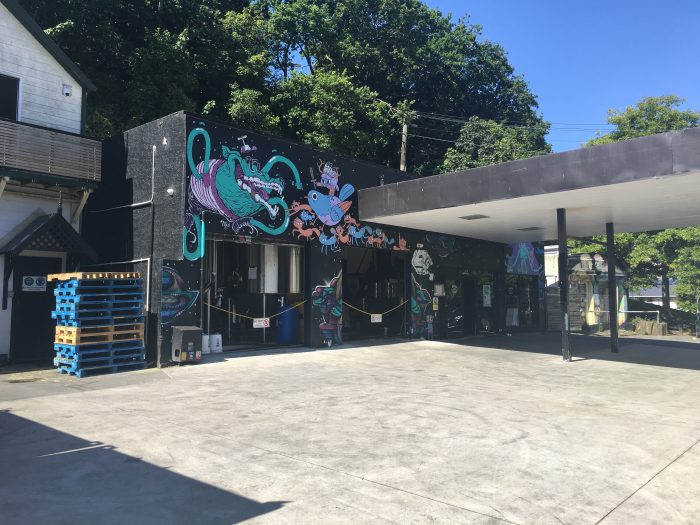 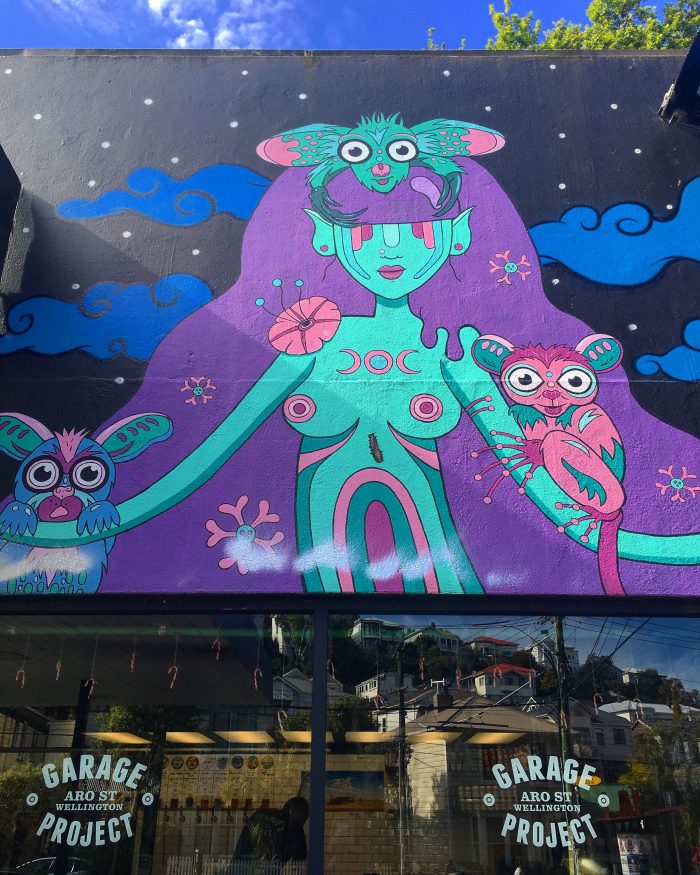 These guys are huge beer geeks, constantly experimenting to make new, unique beers. You’re not going to always find the same limited range of beers here. Their brewery doesn’t serve pints, only growlers, bottles, and cans to go, however you can do as many tasters as you’d like. 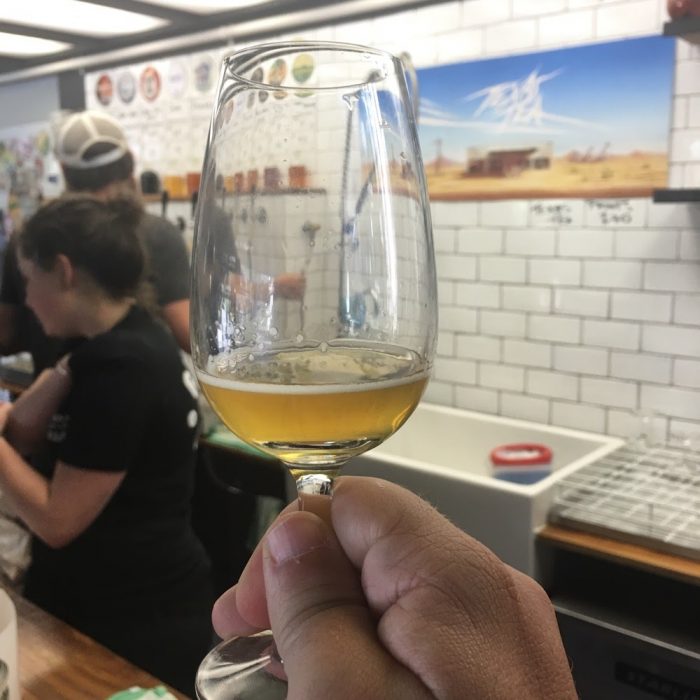 I tasted everything available, plus I then brought a couple of cans of their beers that I hadn’t yet had in New Zealand to take back home. I hope that Garage Project’s international distribution continues to grow because they make fantastic beer.

Oh, you thought I was done with Garage Project? Across the street & about a block to the west from the brewery along Aro Sreet, the Garage Project Tap House features even more of the brewery’s great beer. 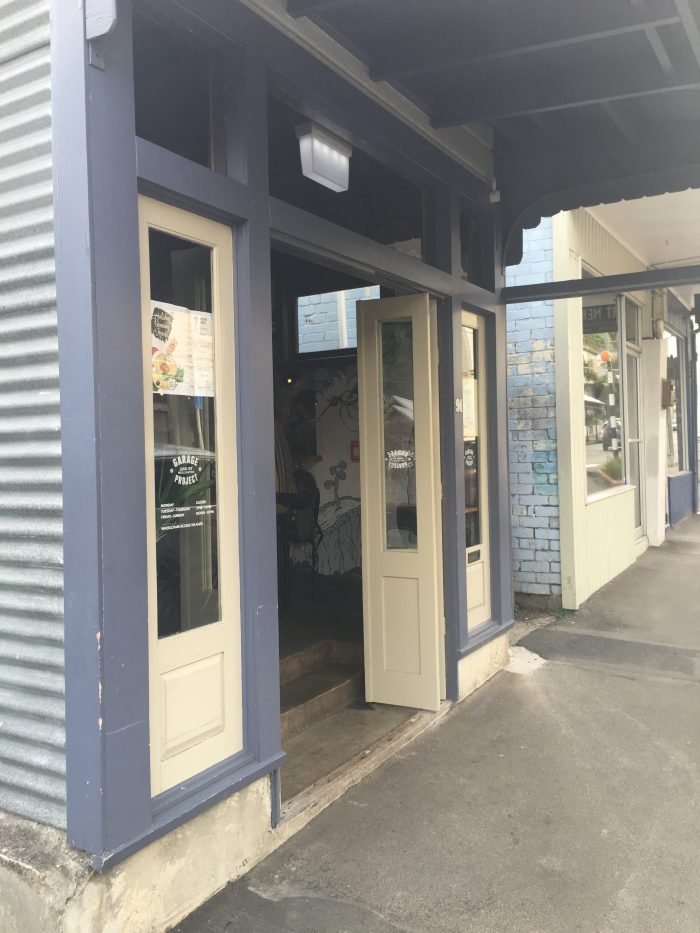 When I was in Wellington, the bar had only been open for about 2 months, but it’s a great spot to relax and try more Garage Project beer. The bar features 18 taps, plus 2 casks. I’ve never seen this before, but at each tap handle they had a small bottle of each beer. This is a great way to get some idea of what style the beer is, if you only like dark beers, light beers, or IPAs. Plus it just looks cool. 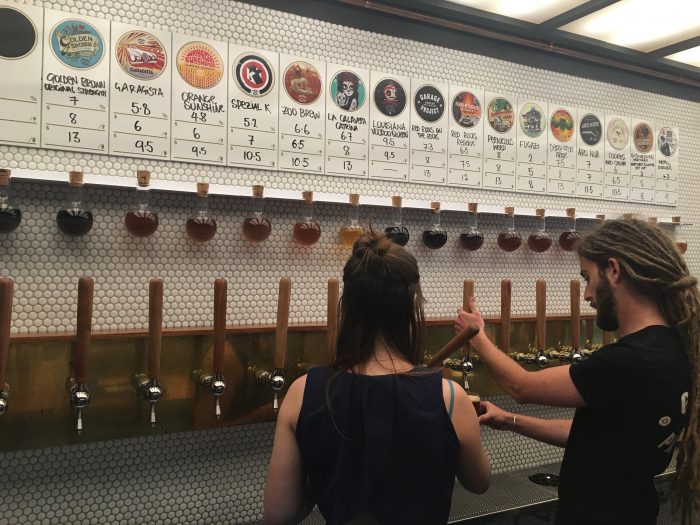 They were still working on the food menu a bit, but they had good snacks & sandwiches. Whoever was responsible for the music that day was also doing a great job, as they were playing The Strokes, Arcade Fire, Yeah Yeah Yeahs, The National, and MGMT. I’d planned on visiting/revisiting some of the other Wellington craft beer bars after going here on my final evening in the city, but I ended up just staying here. My favorites were Cabbages & Kings, an oyster stout, and Mecha Hop, a face-melting strong beer that was made purely from hop & malt extracts.

These were all of the craft beer bars I managed to visit during my three days in Wellington, which was not nearly enough. I certainly need to go back someday to visit other highly-rated places such as Rogue & Vagabond (which I tried to visit, but was closed for the holiday), Crafters & Co, The Third Eye Tuatara, The Hop Garden, Bebemos, Black Dog Beer Co., and Southern Cross.

With all of these beer bars so close together in central Wellington, you might find yourself needing the facilities. Don’t worry, the city has you covered with large, reasonably clean public toilets located in Te Aro Park.

If you’re looking for even more craft beer in Wellington, or if you want to gain an accomplishment while you’re drinking your way through the city, Wellington has put together a Craft Beer Capital map with stamps. If you visit all 20 places, which includes the places I’ve mentioned, as well as Meow, Fork & Brewer, D4 on Featherston, Sprig & Fern, Moon, Basque, Bin 44, The Bruhaus, & Kelburn Village Pub, you can get a certificate & a t-shirt. While I didn’t do this because I only had a few days in the city, plus some bars were closed for the holidays, it looks like fun & a good way to get to know Wellington through the bottom of a glass.

With an amazing amount of craft beer breweries and bars for its size, Wellington truly is the craft beer capital of New Zealand, and a must-visit destination for any beer geek.

Have any more craft beer recommendations for Wellington? Let me know in the comments!