Since I’d needed to check out of my hotel in Kuala Lumpur at 4pm, but my flight wasn’t until later that night, I had plenty of time to kill at the Kuala Lumpur International Airport. Between my onward ticket to New Zealand in Malaysia Airlines Business Class and my Priority Pass membership, I had several lounges I could potentially visit. With so much time, I decided to visit all of the ones I had access to in the KUL Satellite Terminal. My first stop was the Cathay Pacific Lounge, as it appeared to be the smallest of the three.

The Satellite Terminal at KUL is accessed via a short train ride from the main terminal. The building is in the shape of a plus sign, and the upstairs portion of the terminal houses all of the various airline lounges. 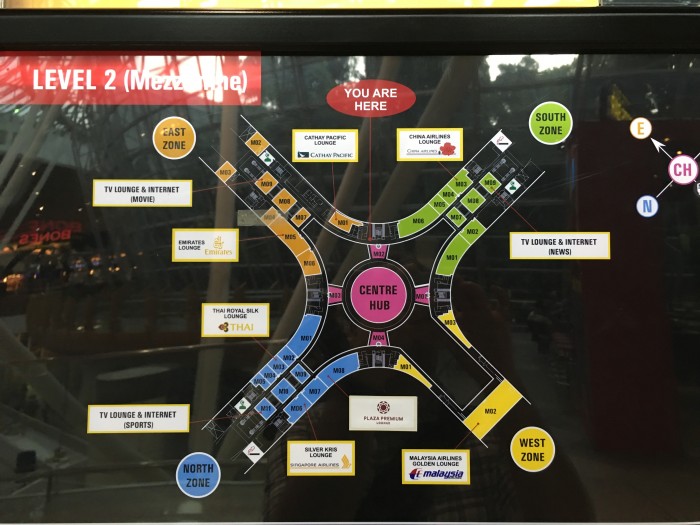 In the center of the building, a bit of forest has been preserved (or constructed, I suppose). It’s interesting to look at, though it would be even more impressive if they had actually turned it into a miniature zoo or botanical gardens you could venture out into while waiting for a flight. 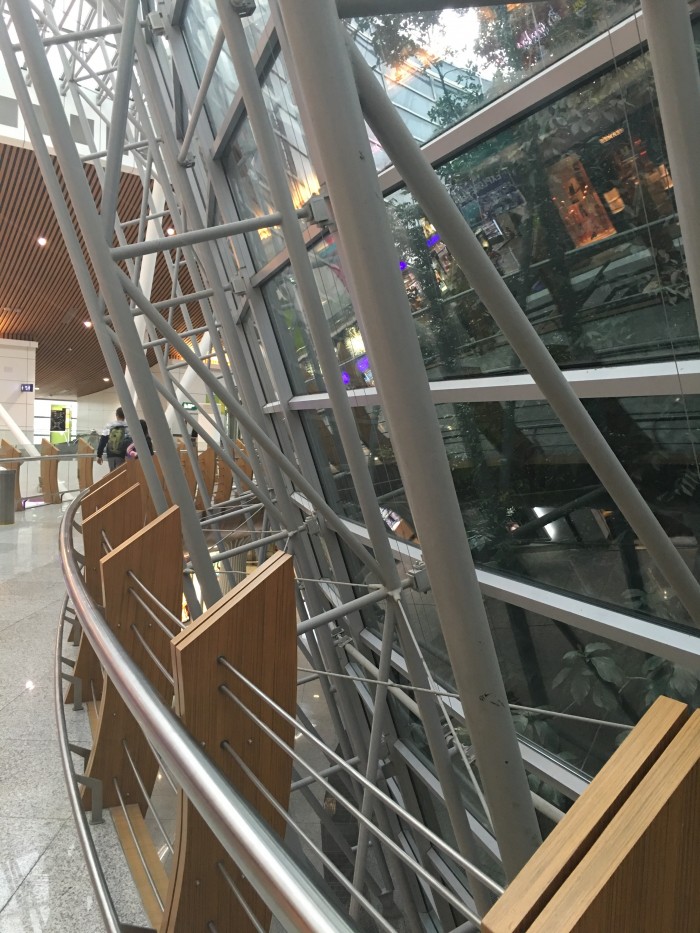 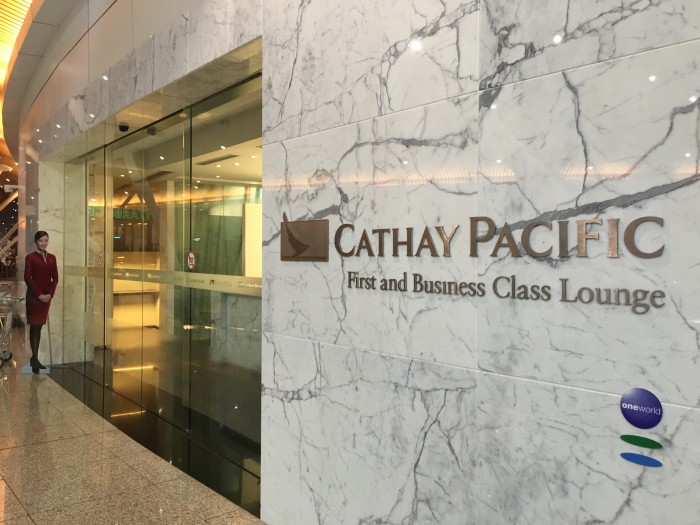 Inside, the lounge had amazingly plush carpeting in the seating areas. After having walked around Kuala Lumpur all day, it was a welcome sight. Of course, it’s not like I did much walking in the lounge, since it was rather small, but it was still nice. 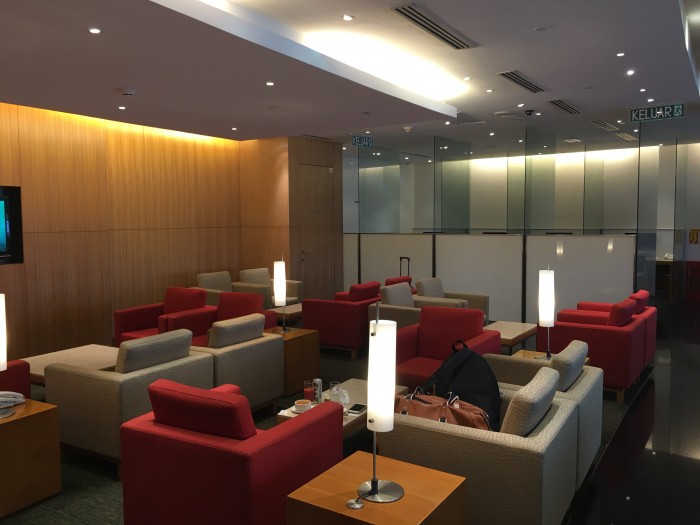 The Cathay Pacific Lounge has lots of seating, though it was quiet when I was visiting. There are around four flights per day from Kuala Lumpur to Hong Kong, so I think I had timed it in between flights. Plus, since most passengers should have access to the much-larger Malaysia Airlines lounge as well, I imagine that also draws some business away. 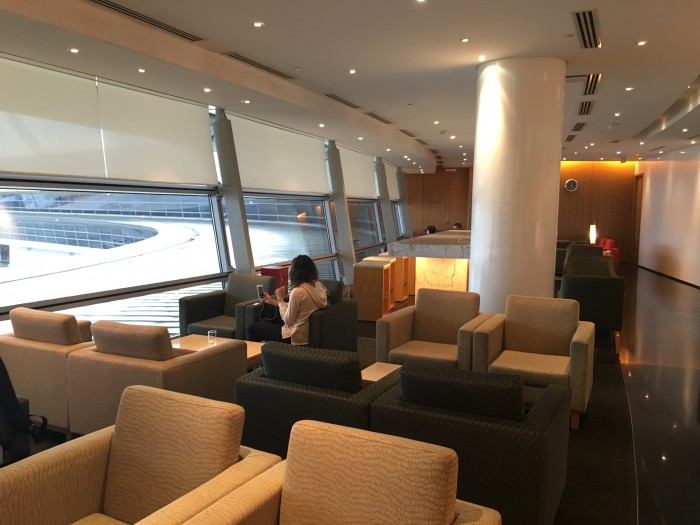 There was also business center inside the lounge. 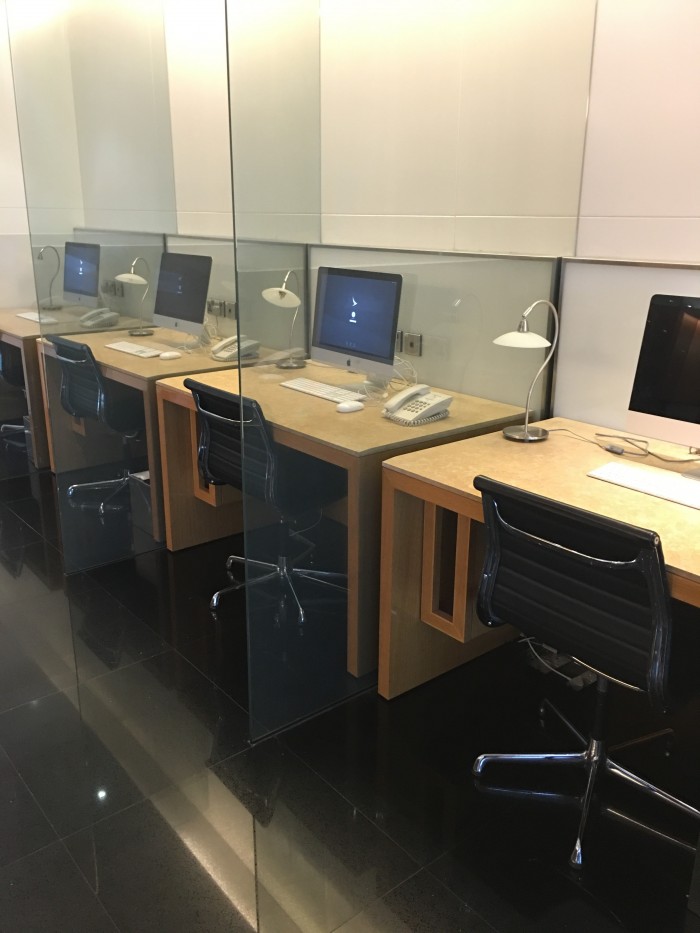 The food selection was eclectic, to say the least.

There were soups, but sadly no typical Cathay noodle soup. Instead, there was Chinese borscht. I had no idea that there even was a Chinese version of borscht. There was also curry, but no rice or noodles with it. 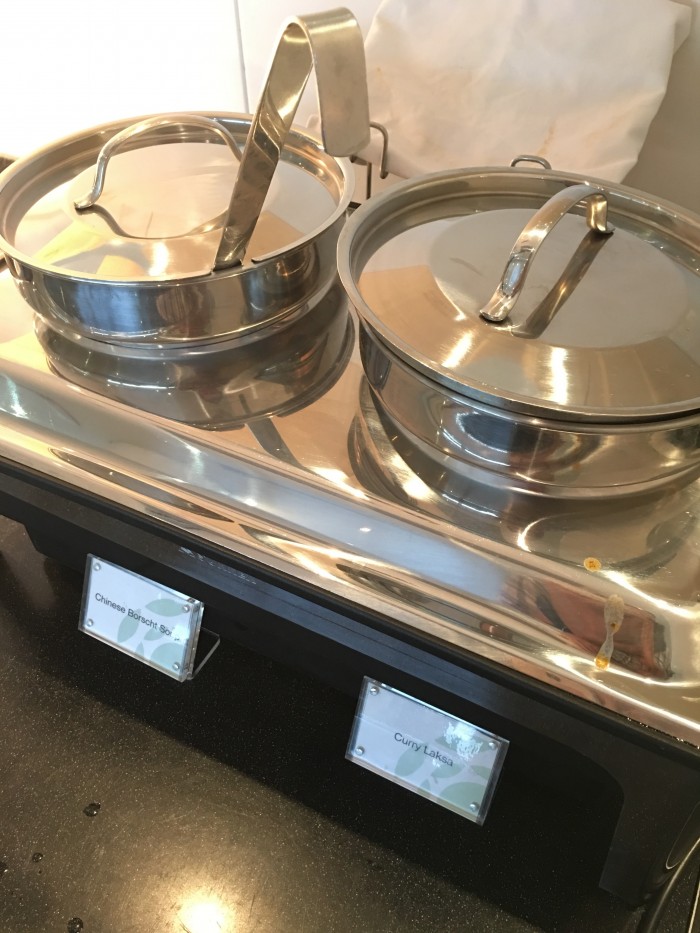 There were some salads and some lame-looking sandwiches. Who wants a chicken ham or tuna sandwich? No, I did not leave out commas, the two choices were “chicken ham” and “tuna”. 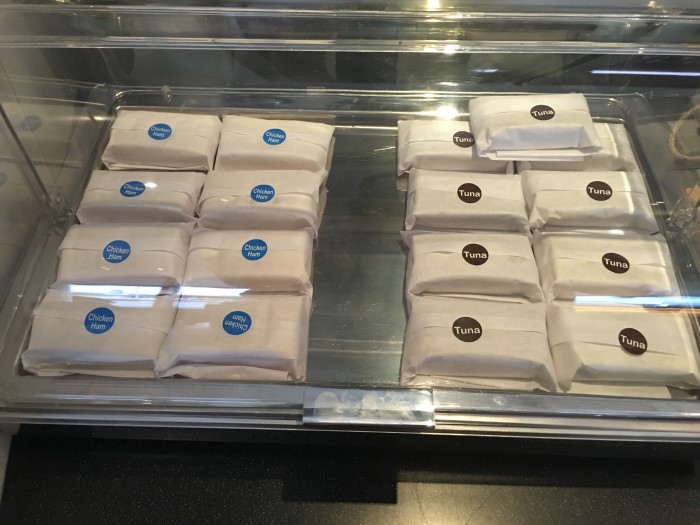 Or perhaps a cup of instant noodles? 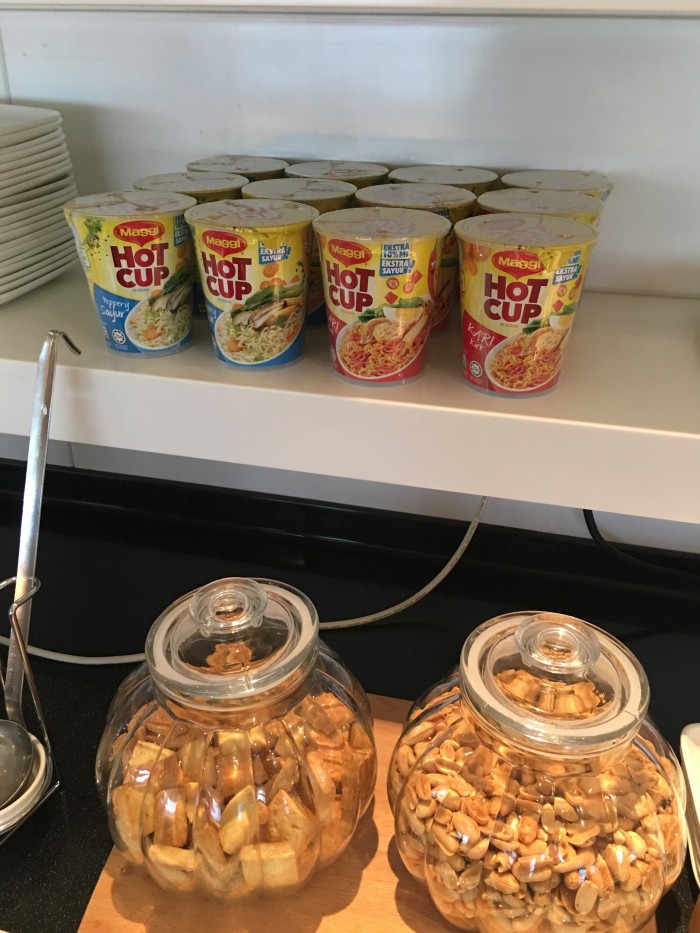 Not feeling the borscht? How about some Snow Fungus with Dried Longan Sweet Soup? 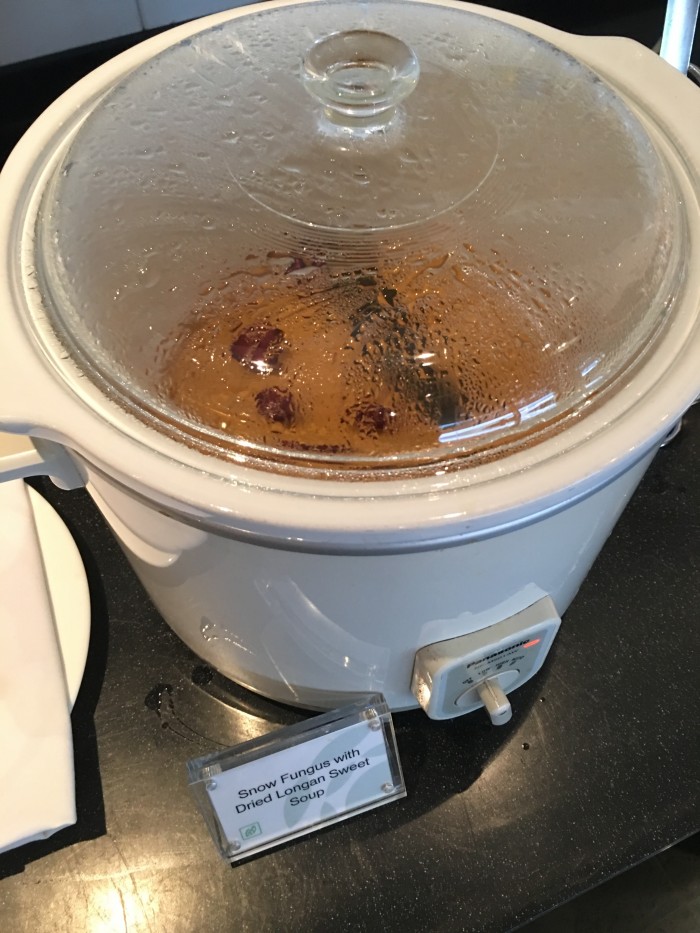 Kudos to Cathay Pacific for having some interesting local dishes, but these were more adventurous than I had much of an interest in right before being trapped in a tube for hours, so aside from a quick snack of some appetizers & desserts, I opted to wait until the next lounge, figuring they’d have different options. 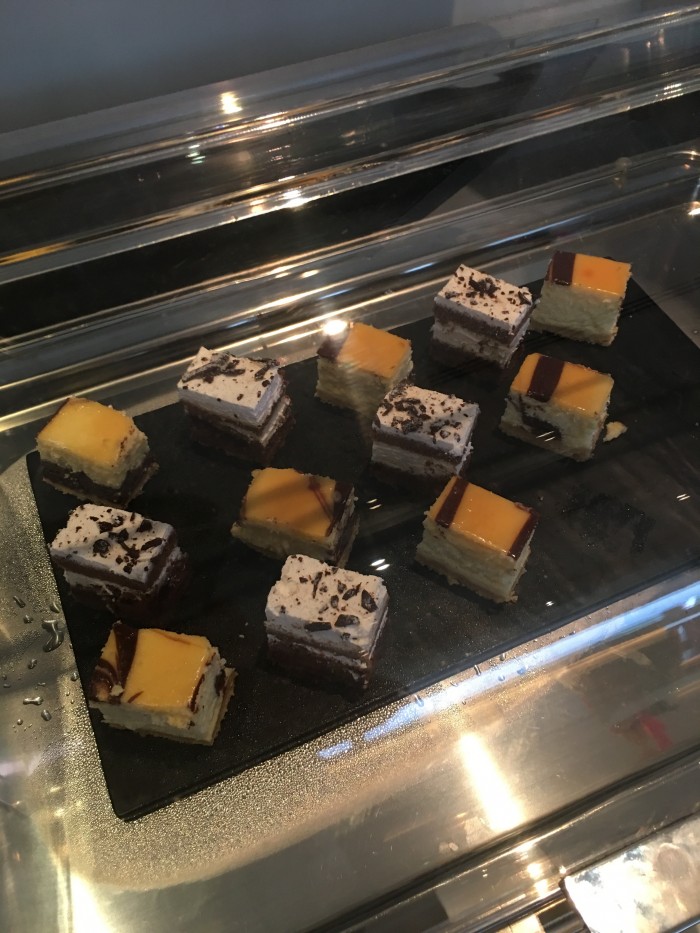 As for drinks, the bar selection was very small, but since Malaysia is a Muslim country, I can give this a pass. That said, the non-alcoholic drink selection was also lame. If you’re not able to provide much alcohol, at least provide some decent non-alcoholic beverages. 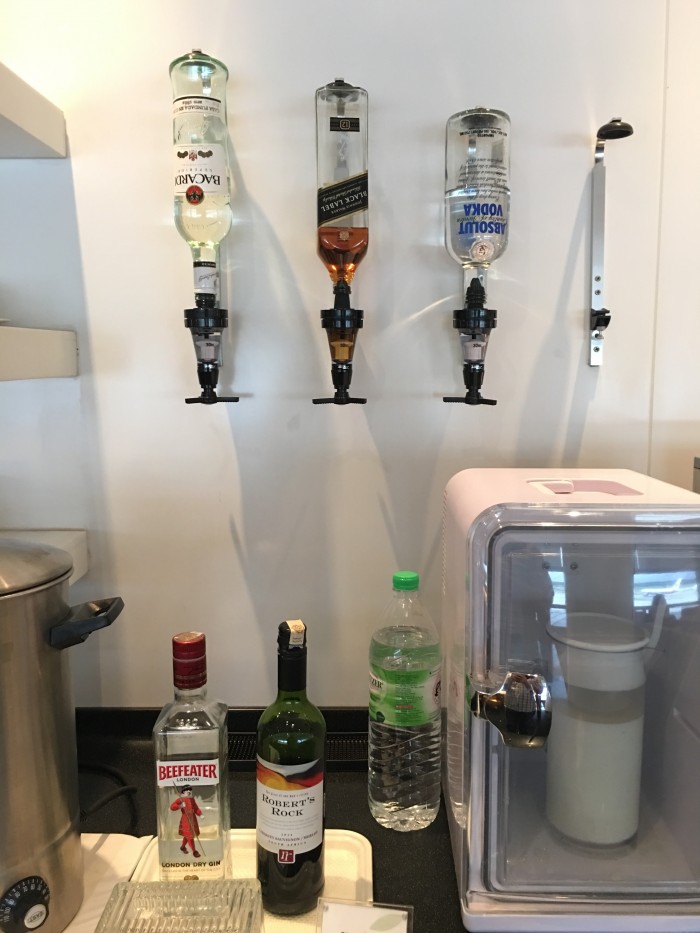 Overall, the Cathay Pacific Lounge in Kuala Lumpur was my least favorite in the airport, and in fact it was my least favorite Cathay Pacific lounge I’ve ever been in. It’s comfortable & quiet, but that’s about all it has going for it. As far as how it compares to the other two lounges, you can read my reviews of the Plaza Premium and Malaysia Golden Lounge in the satellite terminal as well.

Given that they are both Oneworld members, it’s interesting that Cathay Pacific has their own small, pathetic lounge when Malaysia Airlines has a much larger lounge just across the terminal. Perhaps it’s a point of pride to have their own lounge, and they don’t care about the expense. Maybe it’s because Malaysia Airlines is a relatively new member of the Oneworld alliance, or they have no interest in sharing their flagship lounge, but given how much space there is in the Malaysia lounge, you’d think the two airlines could easily just combine operations there. It’s not as if Cathay Pacific appears to be putting much of an effort into their current space.