After a few days in Hong Kong, it was time to begin the final portion of my journey home. Thanks to my generous US Airways award routing, I was able to have a 23-hour visit to Osaka, Japan. I loved my visit to Japan last year, so I jumped at the chance to spend a day there. Rather than fly back directly, I went from Hong Kong to Osaka in Cathay Pacific Business Class, via Taipei. 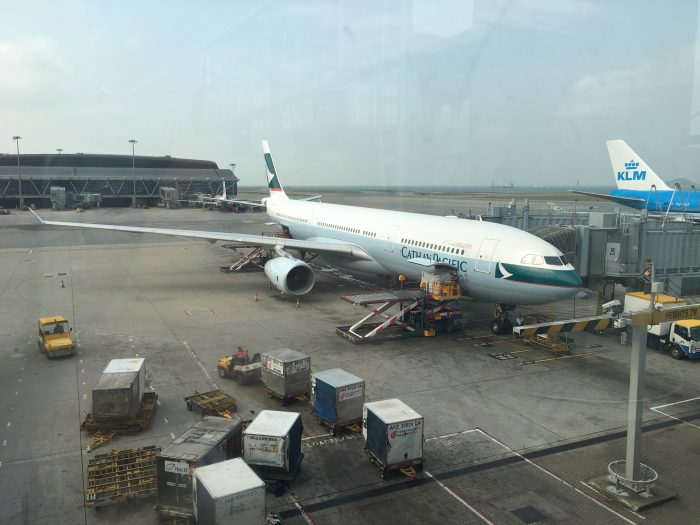 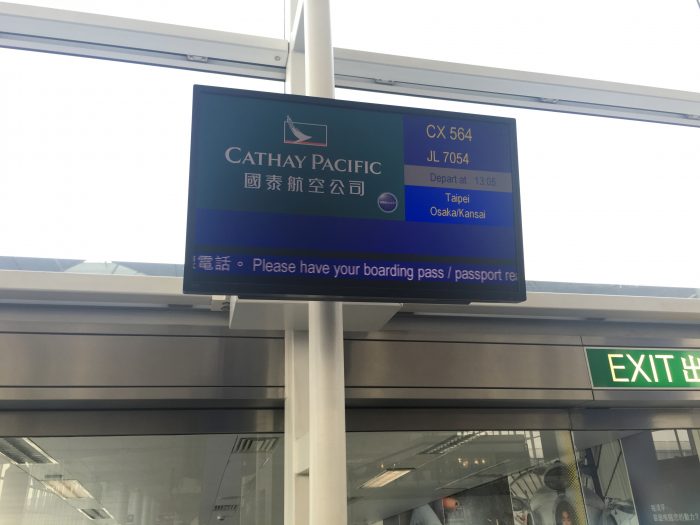 The flight was on an Airbus A330-300, which I have flown on in business class on Cathay a couple of times before. The regional business class seats in the 2-3-2 configuration aren’t as comfortable as the long haul reverse herringbone solo seats, but they’re fine. Business class was about half full when we departed from Hong Kong. I had seat 12A, with nobody next to me. 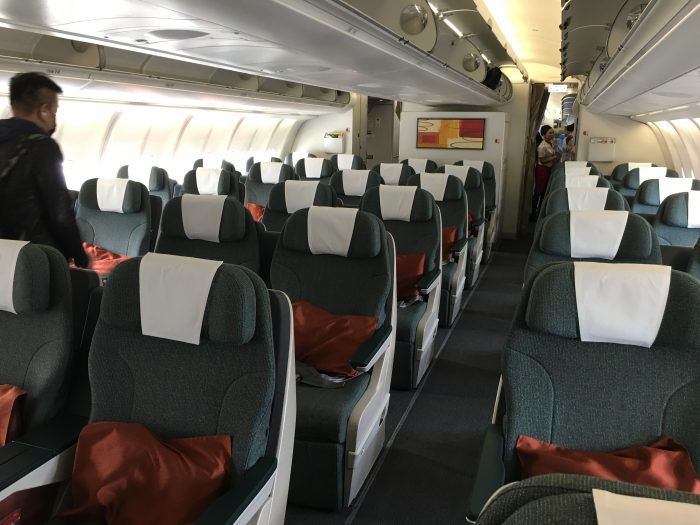 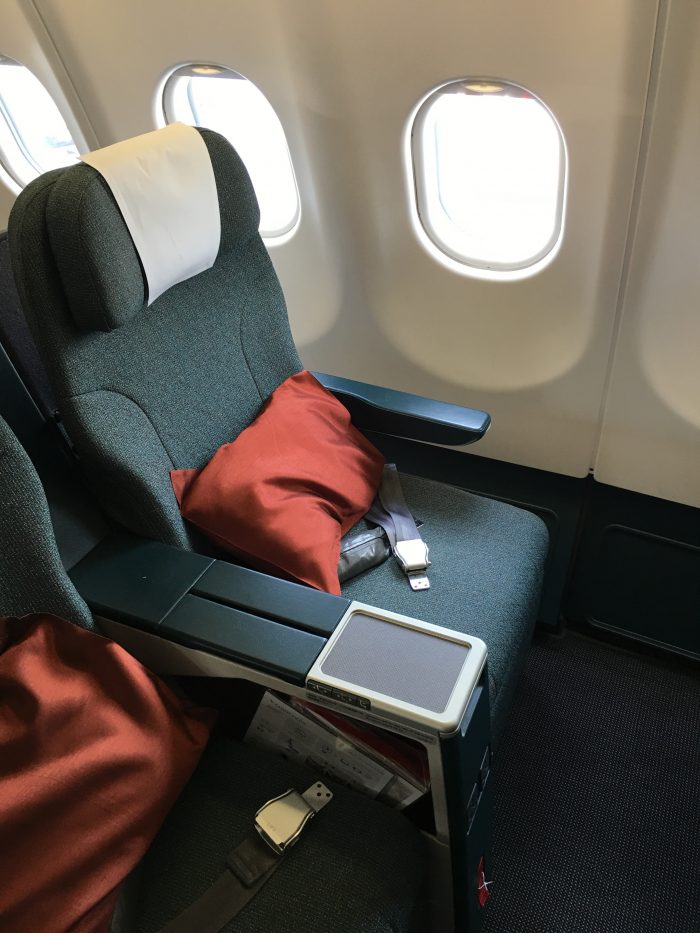 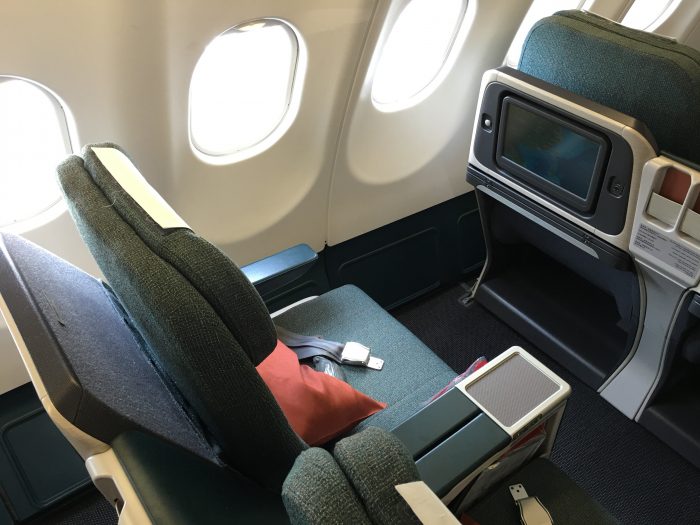 We had this great view of Hong Kong International Airport as we took off. 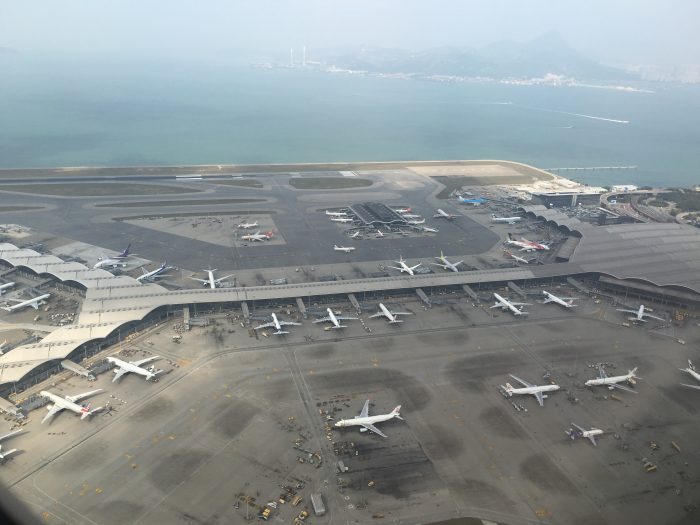 Meal service began as soon as possible, with the food being served mostly all at once. First came some fruit for a starter, plus a roll, but the main course, stir-fried chili prawns glazed with crab meat, followed almost immediately. The prawns were delicious. The veggies looked gross, so I skipped them. The chocolate tart was good, though the caramel could have used a bit more sea salt. 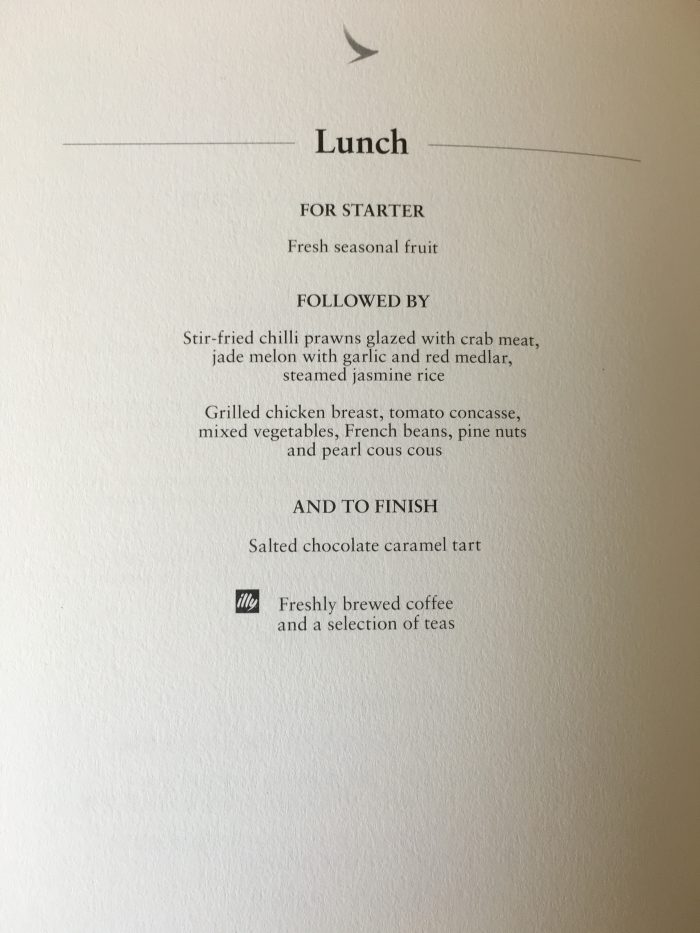 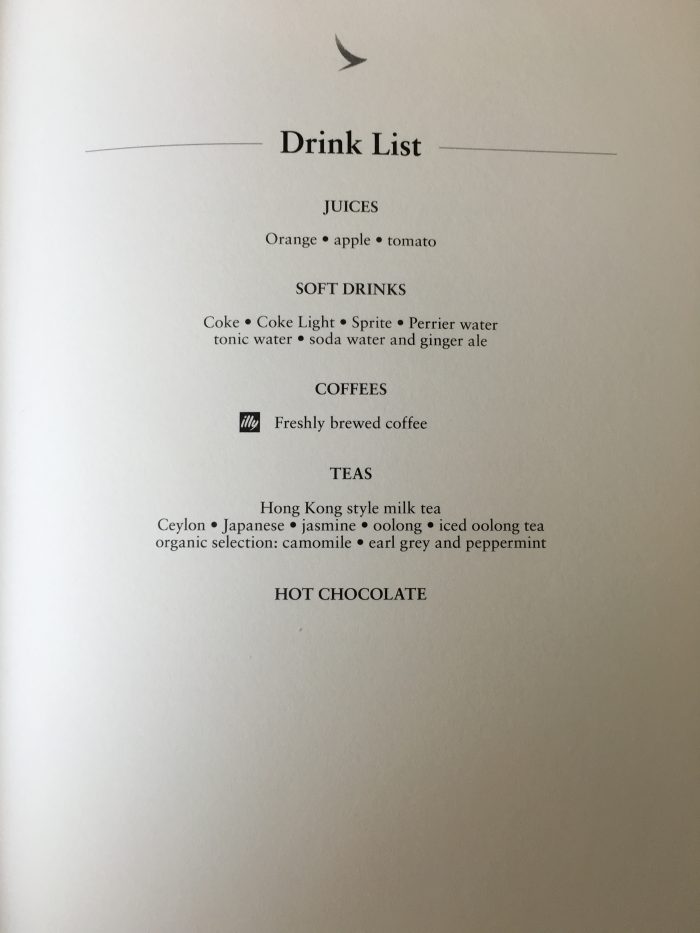 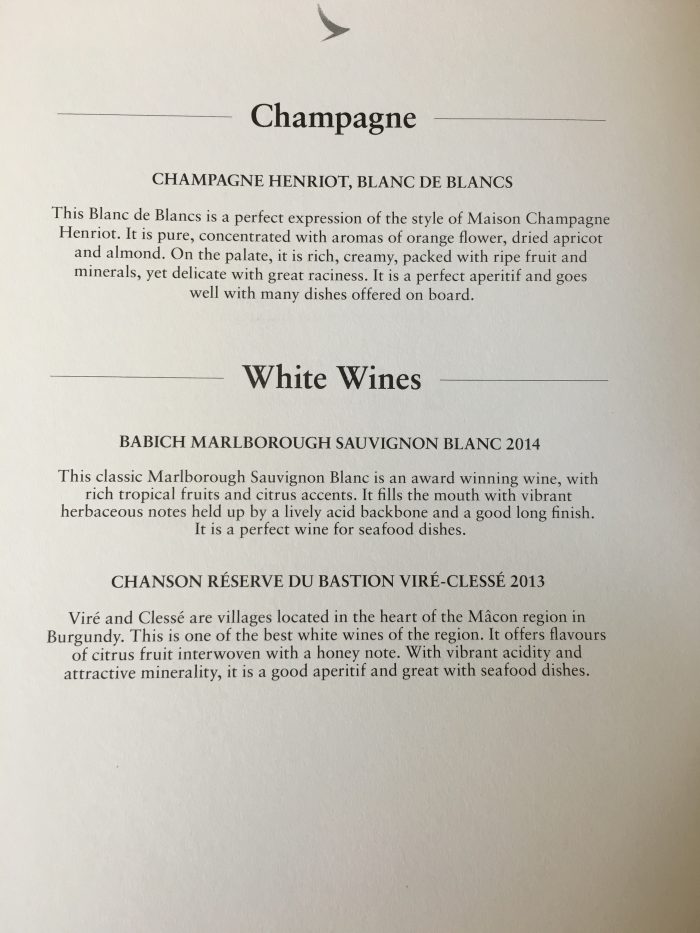 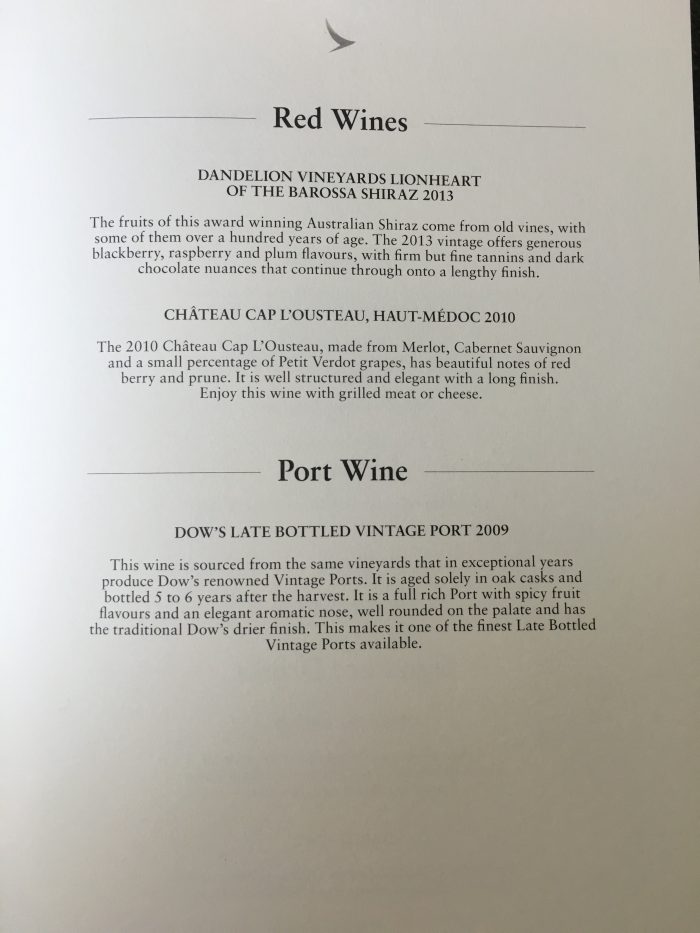 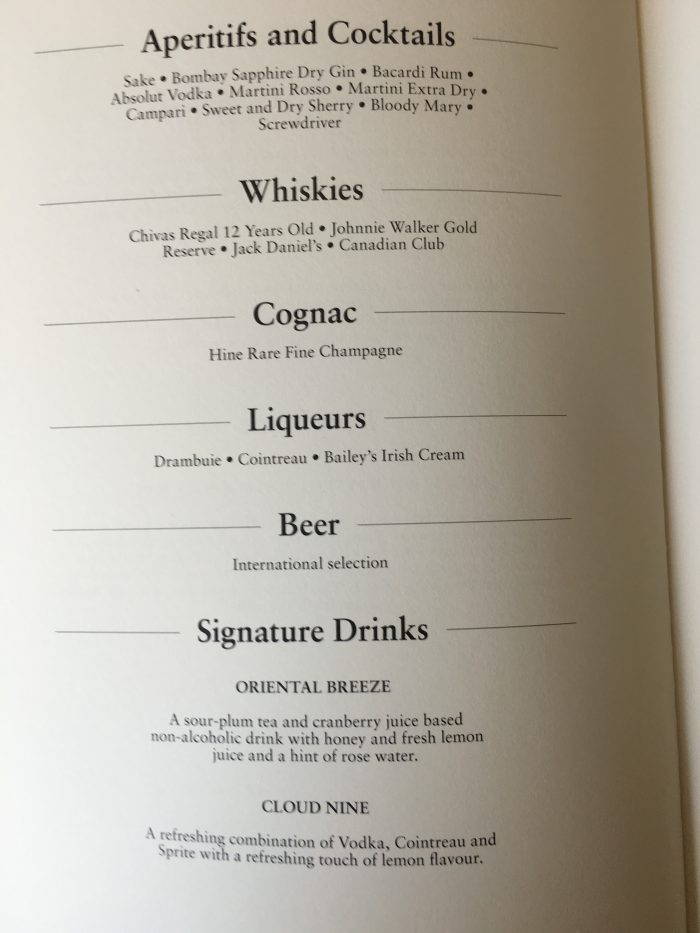 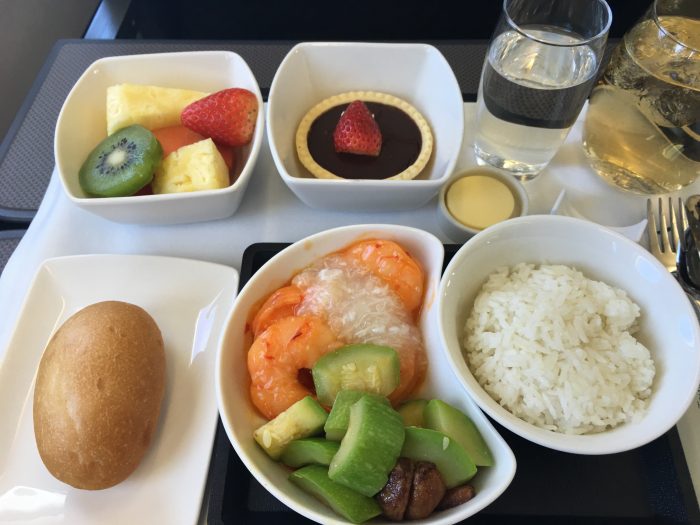 After the quick meal, we landed in Taipei. We had been in the air about an hour at this point. This was the first stopover I’ve had in years. Annoyingly, despite only having an hour stop in Taipei, everyone had to deplane for security reasons. This meant that everyone had to remove all of their things, reclear security, then go to the transit lounge. The whole transit process took about half an hour. I’m not sure why this stopover exists rather than being serviced as a separate flight, and it does add to the travel time, so be aware if you’re booking this route.

Finally, we were back in the air for the second leg of the trip to Osaka. By this point, business class was almost empty for the two hour journey. 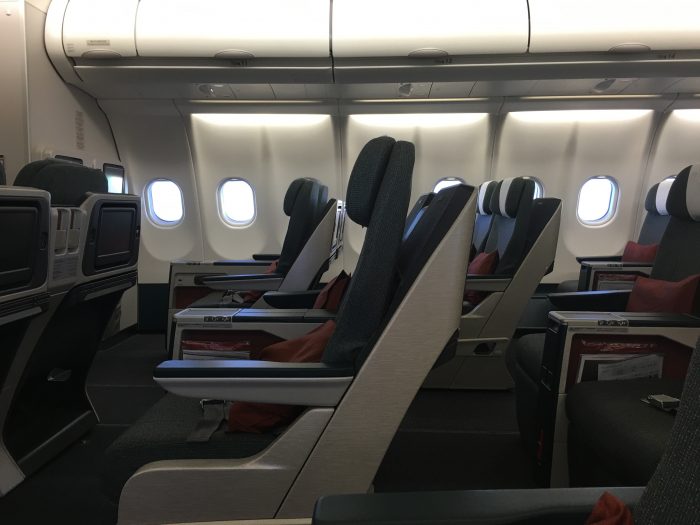 Interestingly, despite the total flight time of about 3 hours, split into two parts, we were served a second meal on the second leg. This makes sense since not every passenger will be on both parts of the flight, but if you are on both, you’re certainly not going to go hungry. The second meal was listed as a refreshment rather than lunch, but it was every bit as heavy as the lunch. 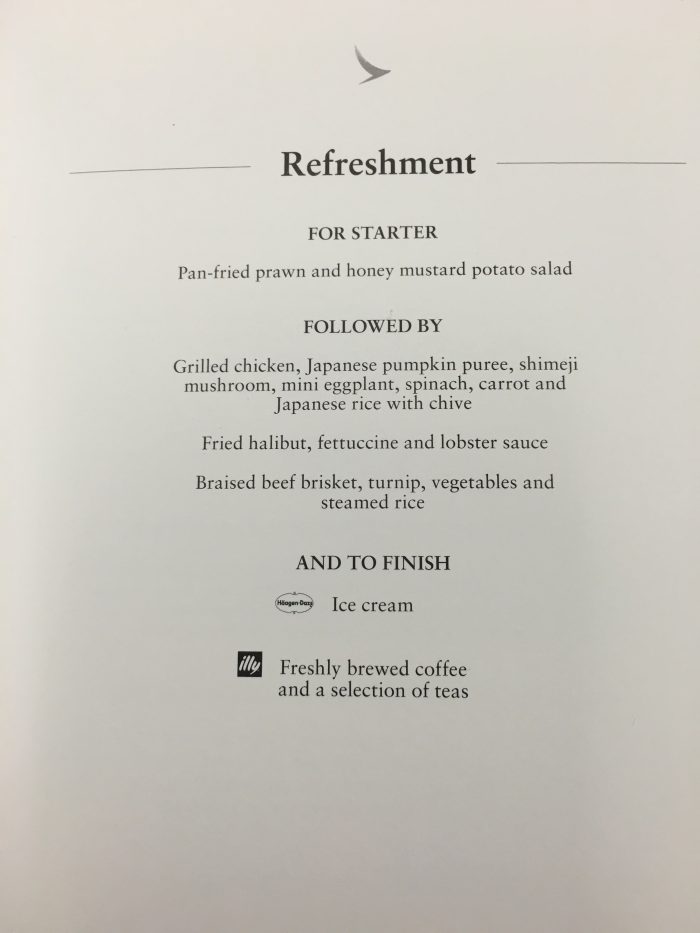 I wasn’t too hungry, so I only had some of my meal, which was fried halibut, fettuccine, and lobster sauce. 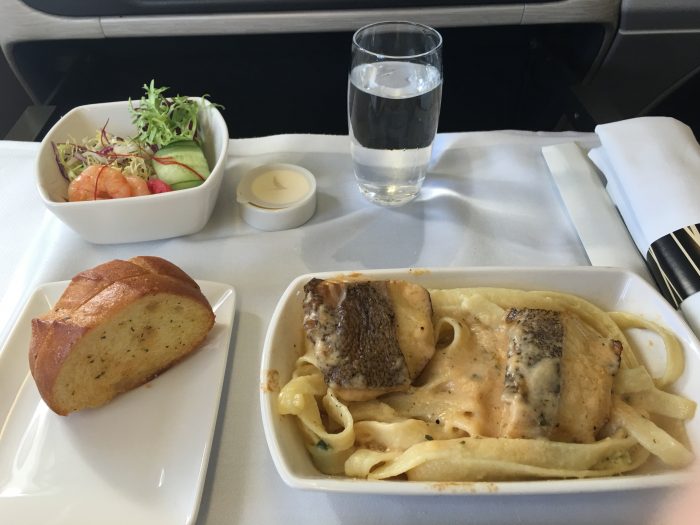 There was ice cream for dessert. 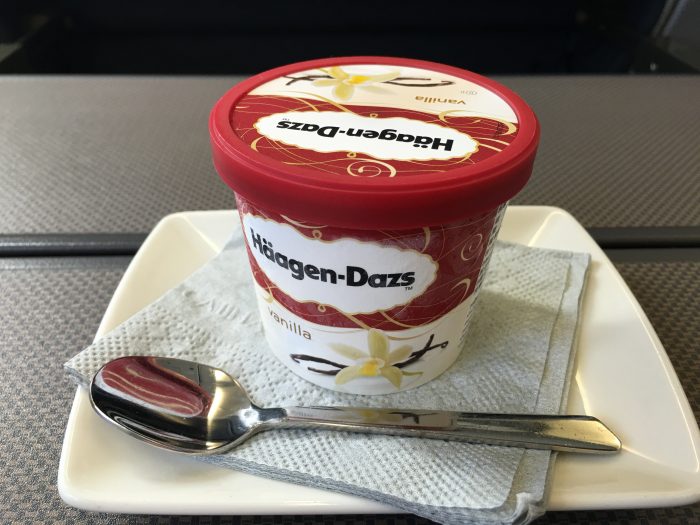 I realize this was only a regional flight, but it was disappointing that the only inflight entertainment was TV shows, no movies. The usual excellent selection I’ve encountered on Cathay wasn’t available this time. Granted, it was only three hours total, but I could have easily watched a whole movie.

The service on both legs of the flight from Hong Kong to Taipei to Osaka was great, as it always is with Cathay Pacific. The flight attendants are always friendly, but never obtrusive or over-the-top. It’s one of the reasons why I enjoy flying on Cathay flights.