When I’m flying in a premium cabin on an award, I always try to make the main part of my trip as long as possible, so I minimize my time in domestic first class. On my trip back from Europe, I was able to get award availability in first class all the way from London Heathrow to Dallas-Fort Worth, which one of the longest flights that American offers between Europe and North America. The entire journey from Helsinki to London Heathrow to Dallas-Fort Worth to San Francisco only cost 62,500 AAdvantage miles + taxes and fees. 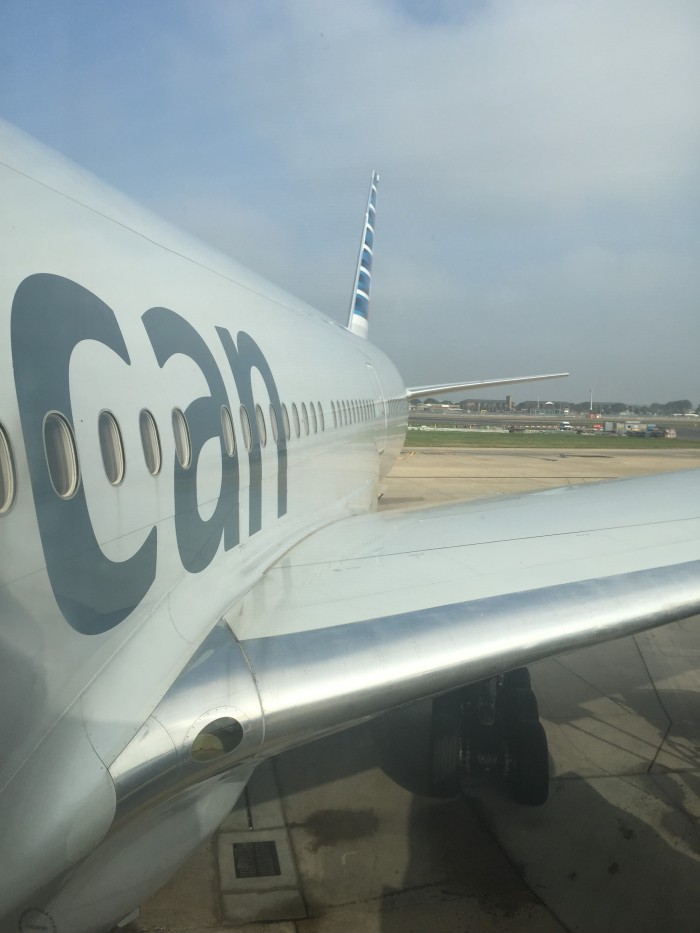 American will be refurbishing their Boeing 777-200s sometime within the next year or two. The refurbishment has been delayed due to manufacturing issues with the new seats, but when it is completed, first class will no longer exist on American’s 777-200s, only business class. 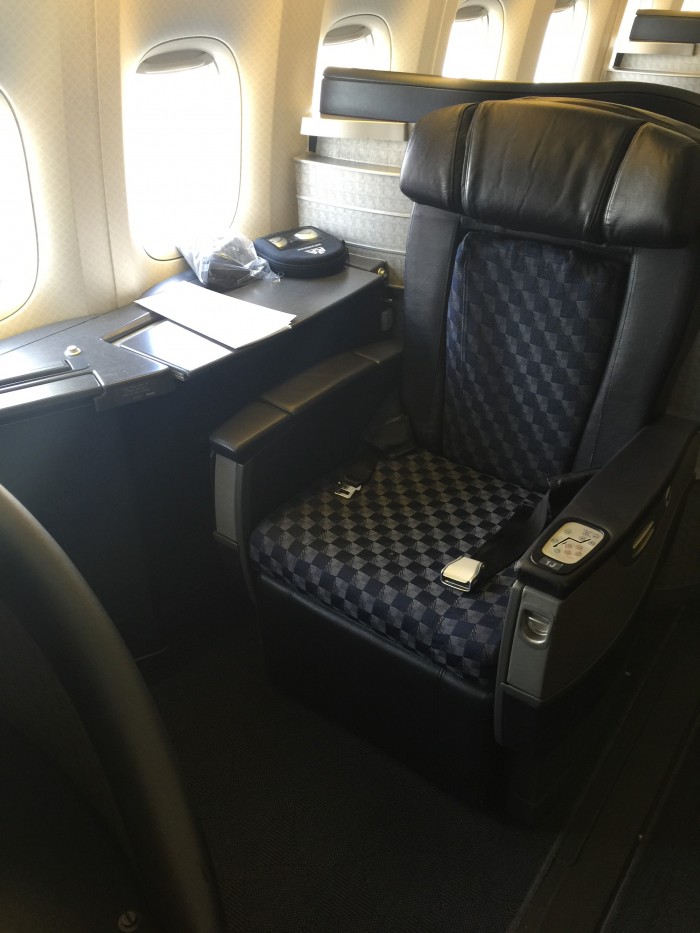 I was one of the first to board the flight, so I set about my usual routine of beginning to take photos of the first class cabin, which is in a 1-2-1 configuration. There was a slight period of confusion regarding the overhead bins. Given the ample space in first class, it should have been straightforward – use the bin right above your seat – but thanks to the bins being slightly misalingned, one guy didn’t do this, so then the woman in front of him (and across the aisle from me) didn’t have a empty bin to use. She asked to share mine, which, although there was plenty of space, was weird. It wasn’t a huge deal, but why drag someone else into it? Ask that guy to move his suitcase to his empty bin.

The first class seat on American’s Boeing 777-200s is unique. While it’s certainly dated, it has three different positions for sitting: straight forward for takeoff, landing, and meals, angled to form the bed and relax, and then one that is great for doing work, if you’re so inclined. This desk option is something I have not seen on other airlines. The desk area has DC power and a phone jack. Like I said, these seats are dated. 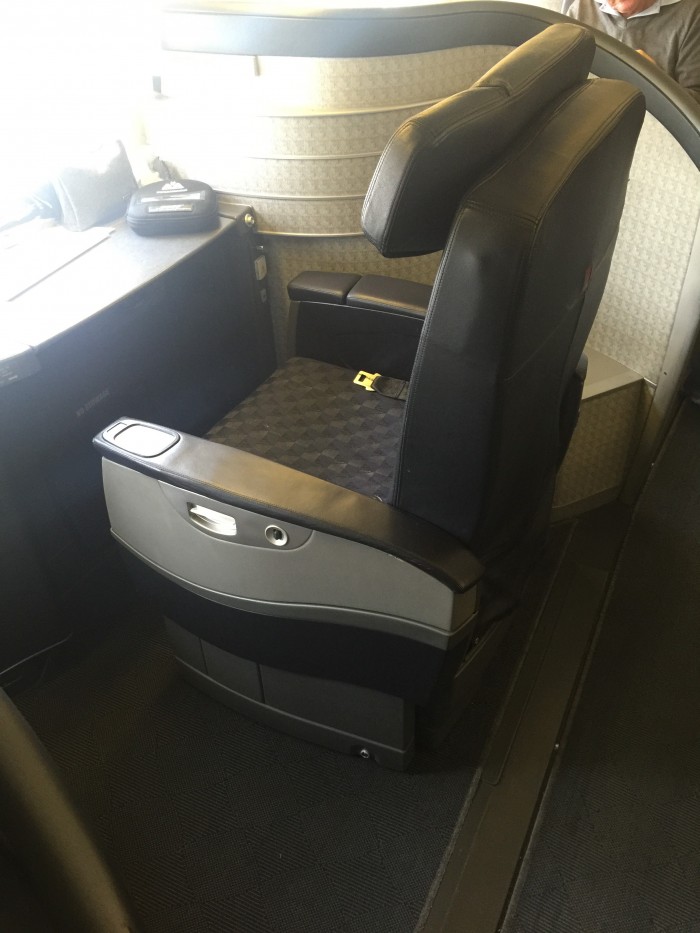 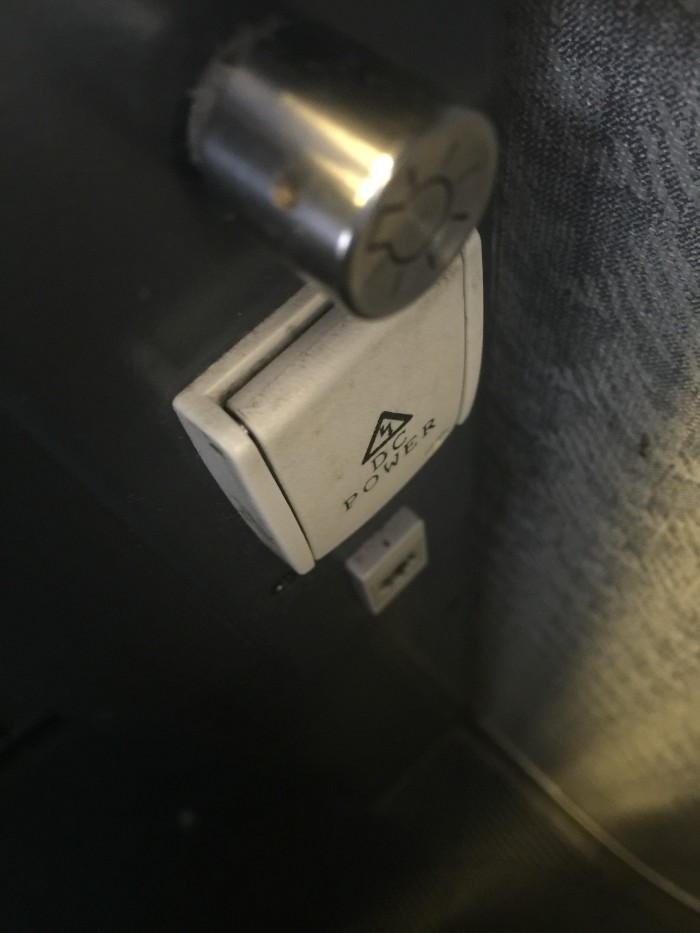 The drawback of this seat position flexibility is that the individual seating areas lack privacy, as you’re essentially sitting in a rotating recliner. Not a big deal if you’re planning on working during a daytime flight, but if you’re trying to sleep, you’re more likely to notice what’s going on in the cabin around you.

While I took photos and explored the unique seat, a flight attendant welcomed me by name and gave me a glass of Louis Roederer champagne, which was nice. 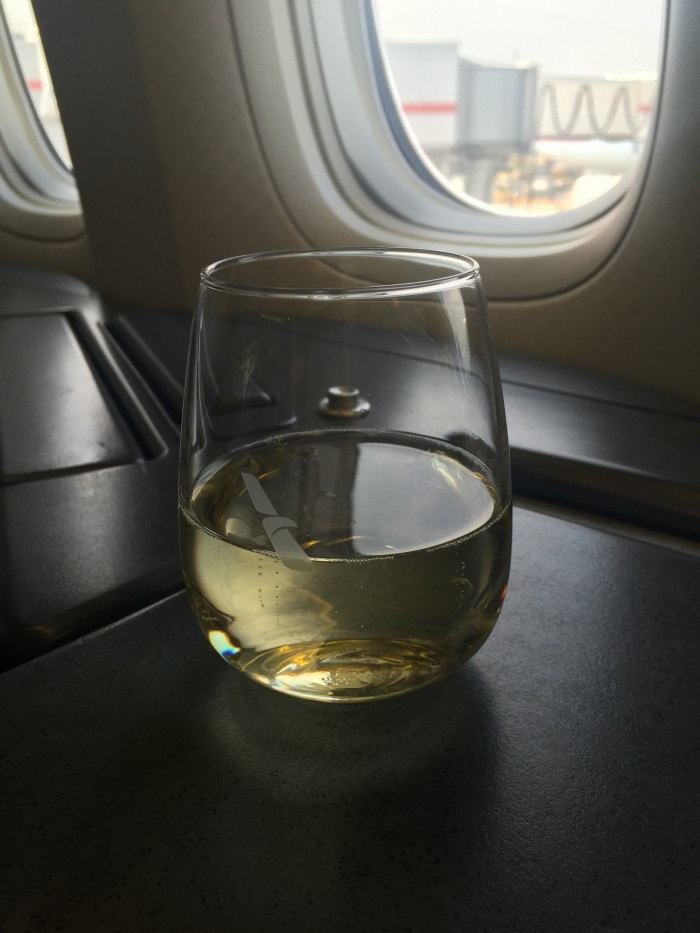 I looked through the amenity kit, which was nothing special, though I do like the simple grey bag. 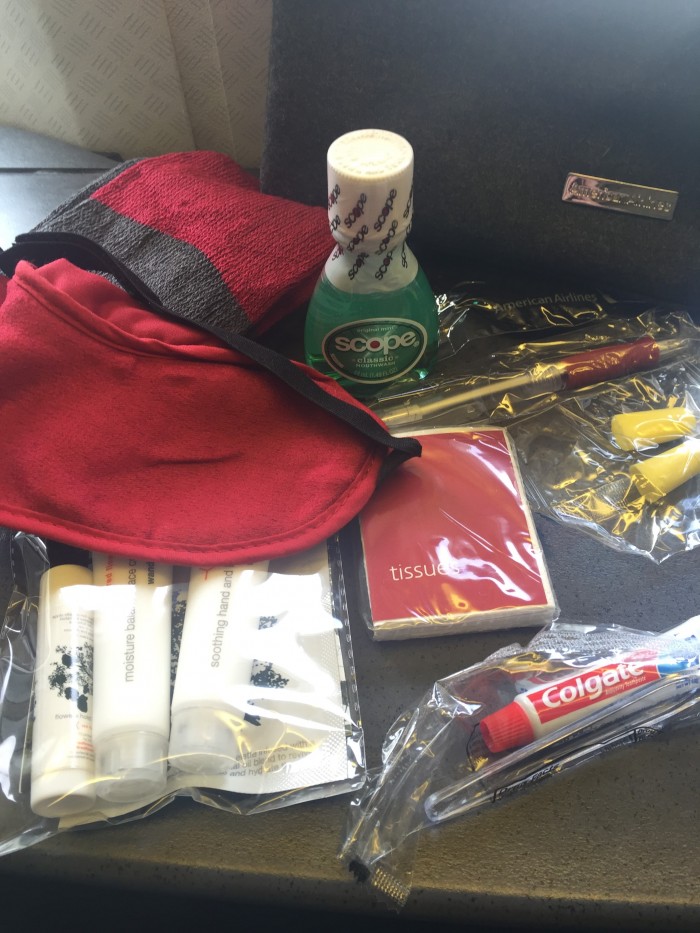 Not too long after we reached cruising altitude for the 9.5 hour flight after taking off from London Heathrow, it was time for meal service to begin. The flight attendants did a great job of letting everyone go at their own pace. If you wanted to take a couple of hours you could, or if you were done with a plate sooner, you could move on to whatever was next.

Here are the first class menus from the flight. 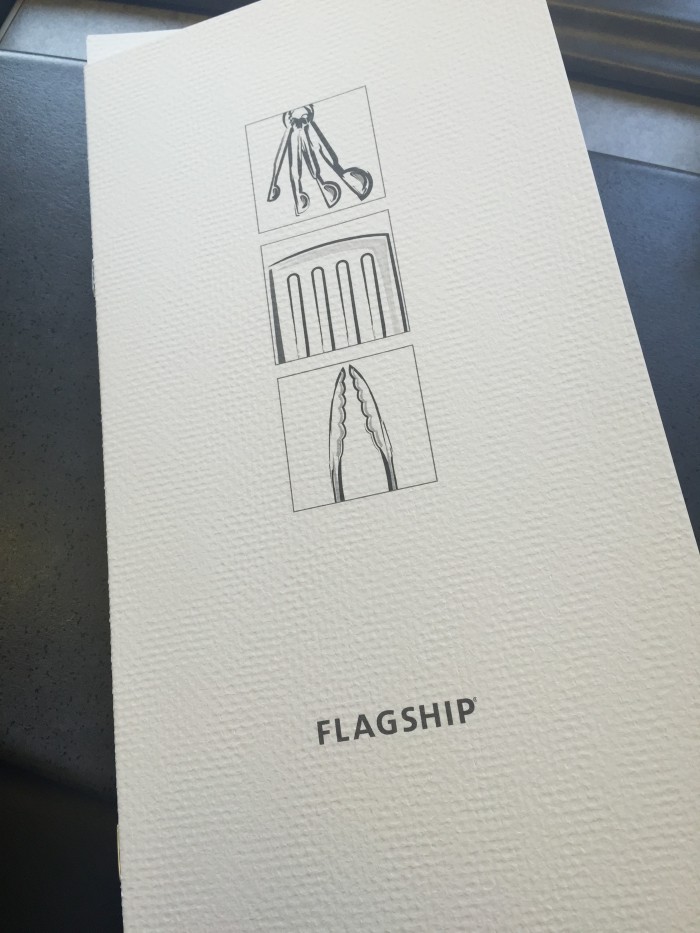 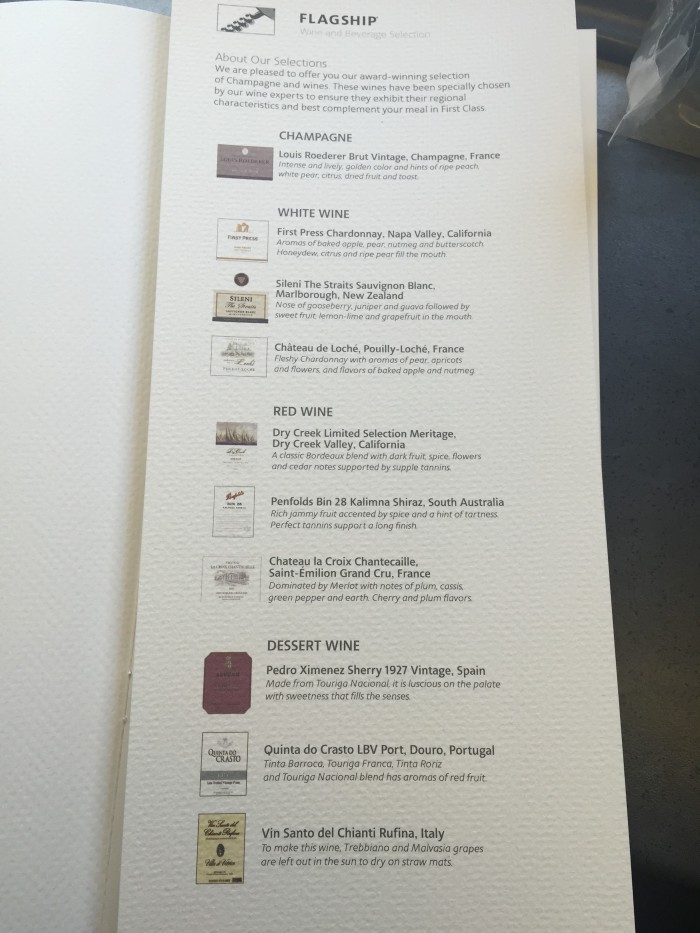 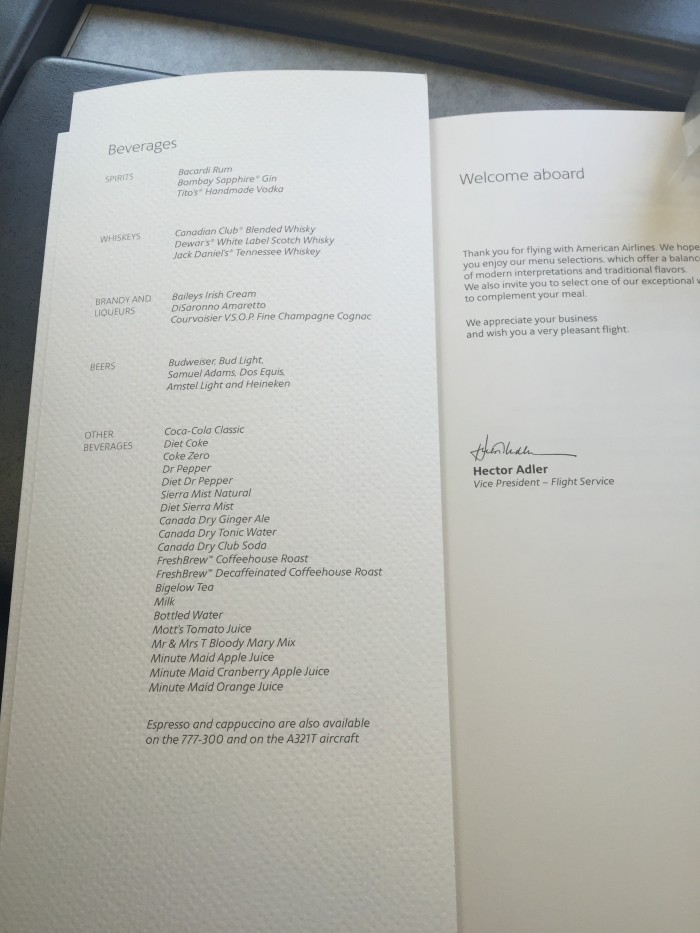 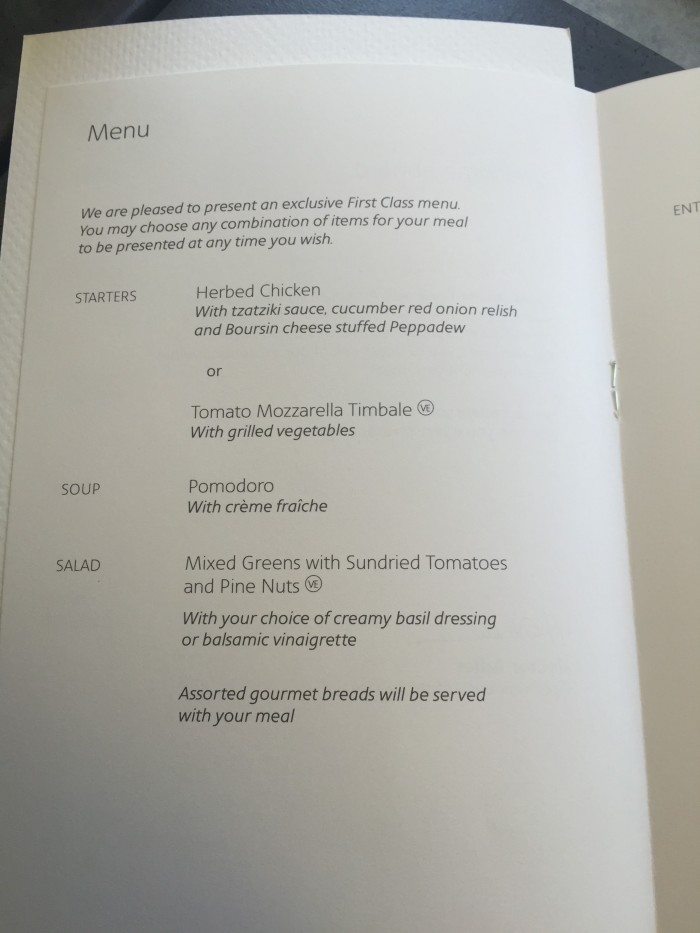 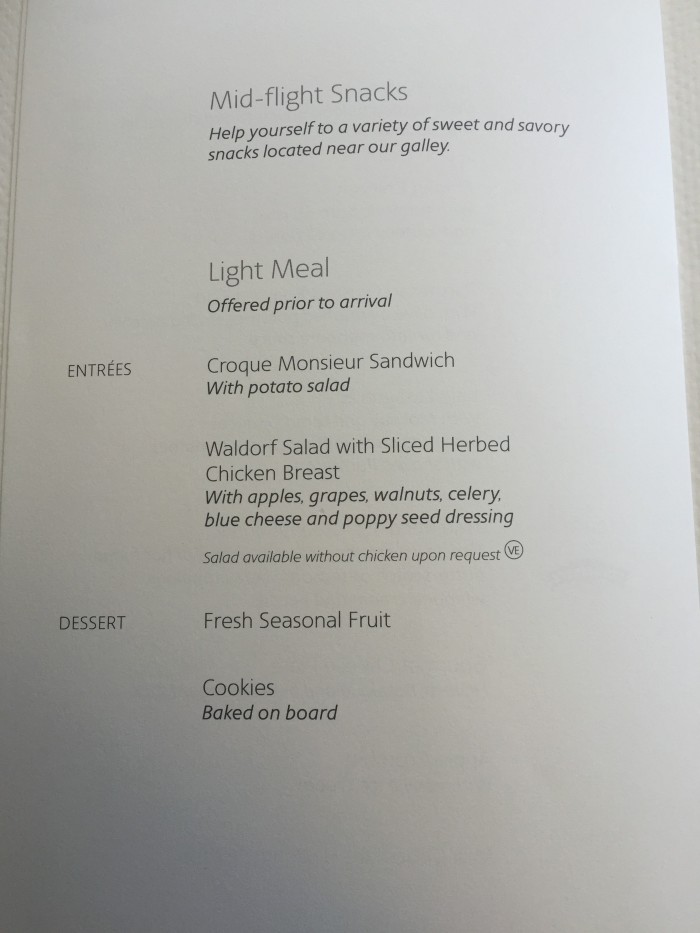 I started with a cold chicken appetizer. Cold chicken seems to be dependable on airlines. 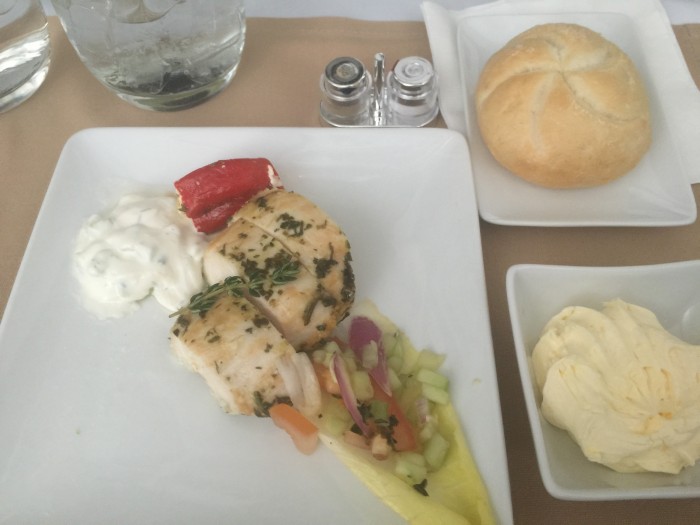 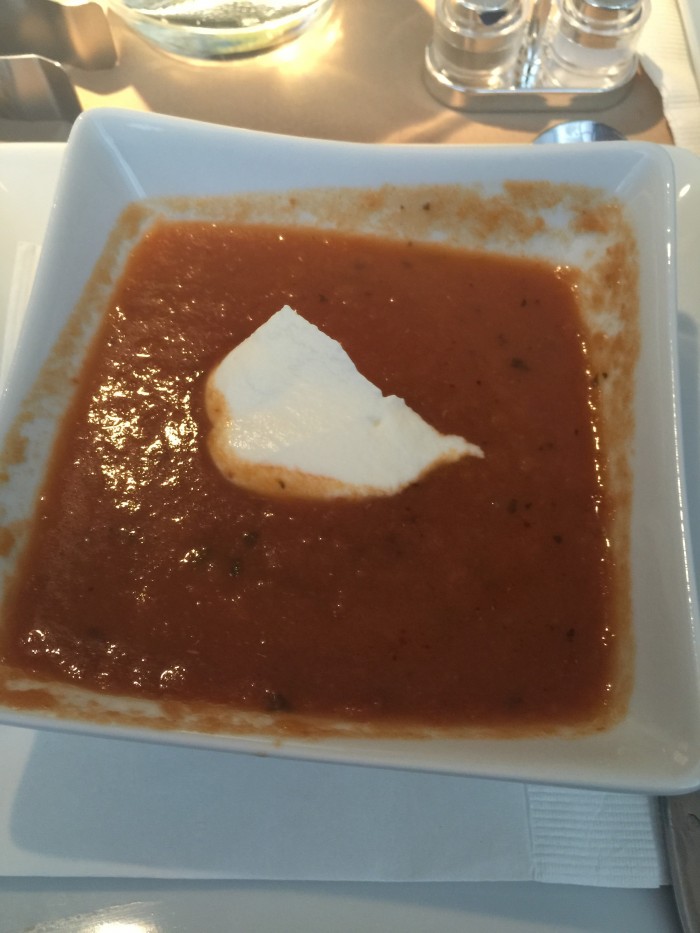 Following that, there was a small salad. 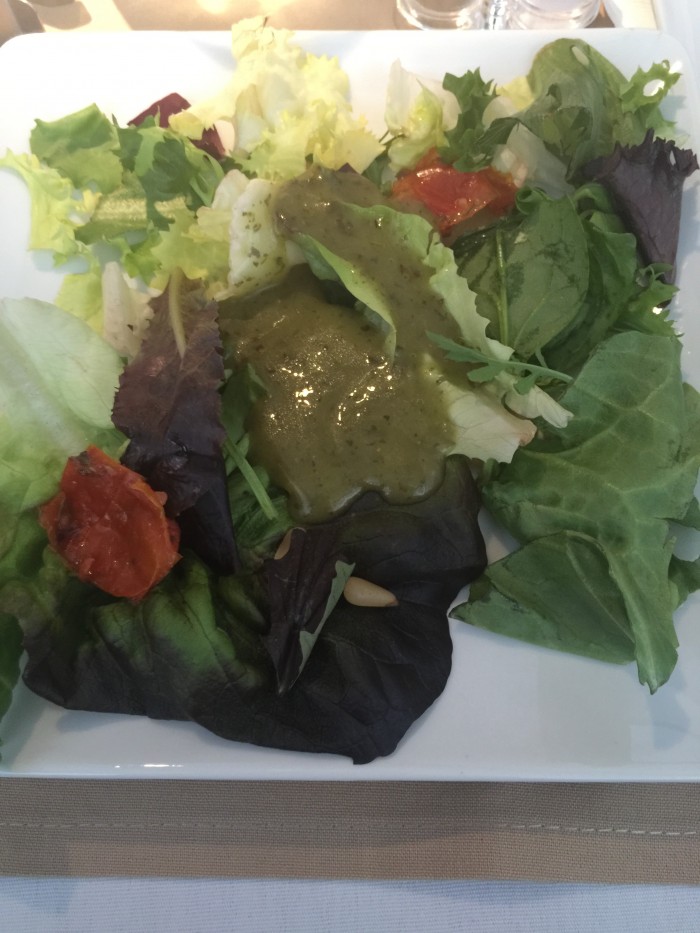 For my main course, I opted for the cod. I don’t normally order fish on planes (or anywhere, for that matter), but it sounded interesting, so I figured why not? It was actually pretty good, though the parmesan crust wasn’t as crusty as you’d expect it to be. 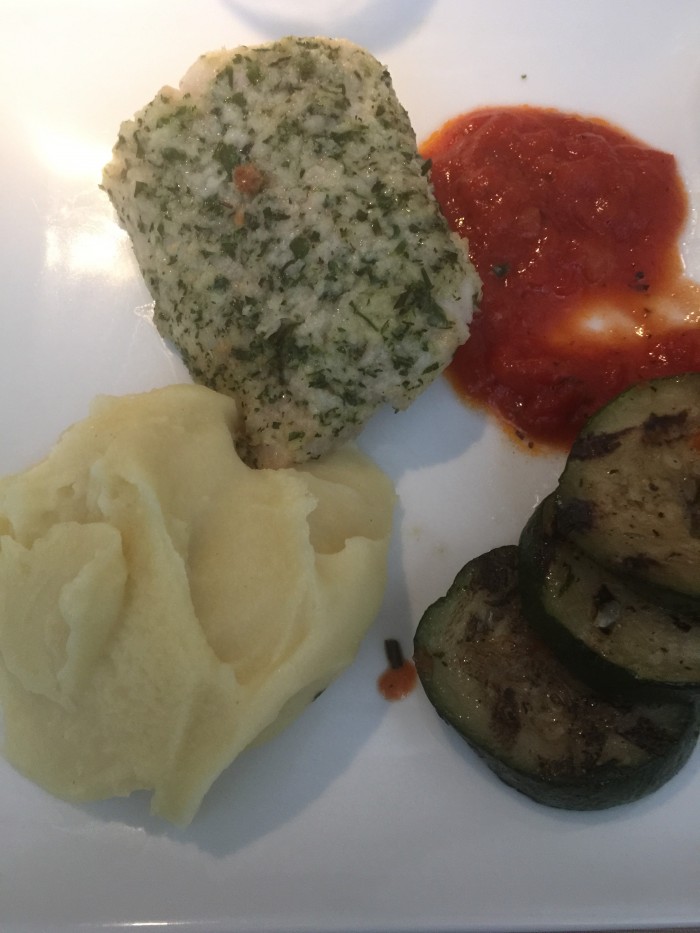 Once I was done with the main course, it was time for dessert. The apple crumble sounded good. As did the hot fudge sundae. Seeing as I was treating myself to a first class award, I treated myself to both, along with a glass of port. 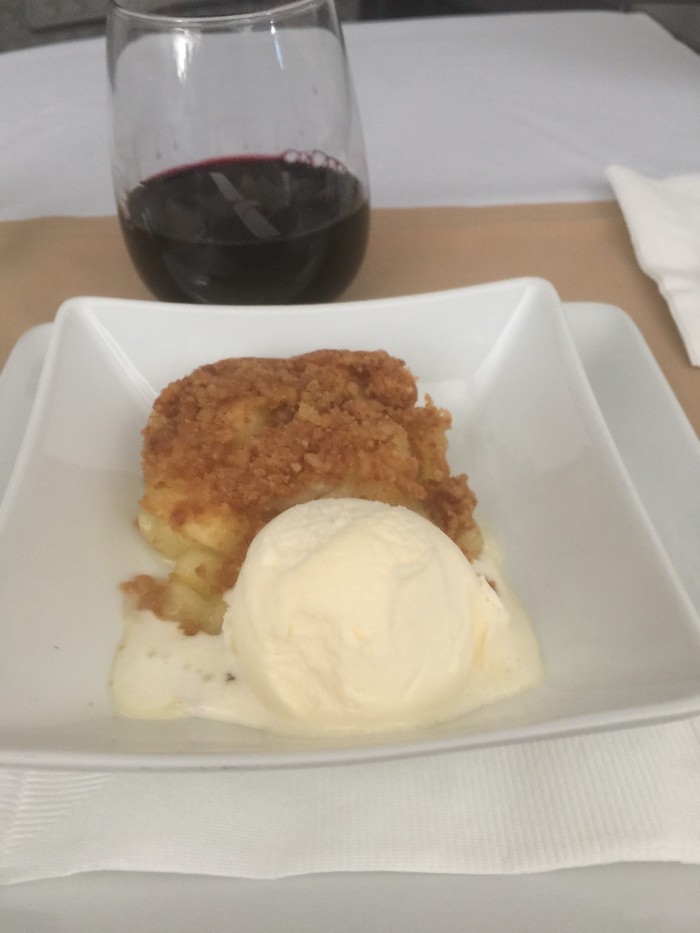 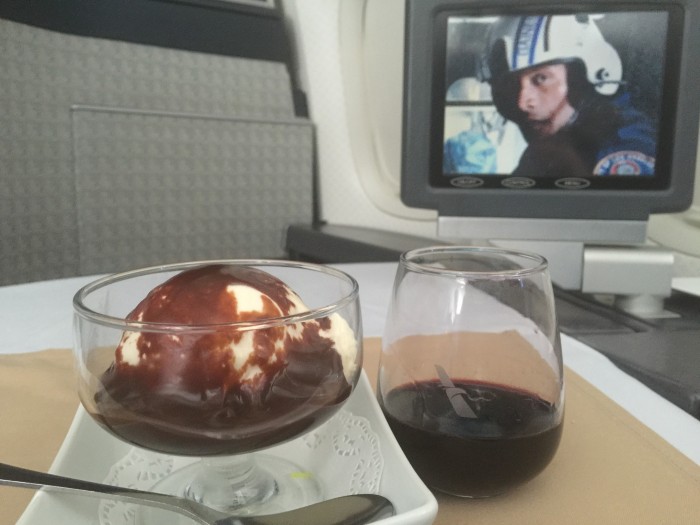 After eating, it was time to relax. My first action was to do my leg stretching test. If I can stretch my legs all the way out in a first class cabin without touching anything, that’s one sign that it’s a great seat. Unfortunately, unlike on Cathay Pacific, I couldn’t extend my legs without hitting the footrest. 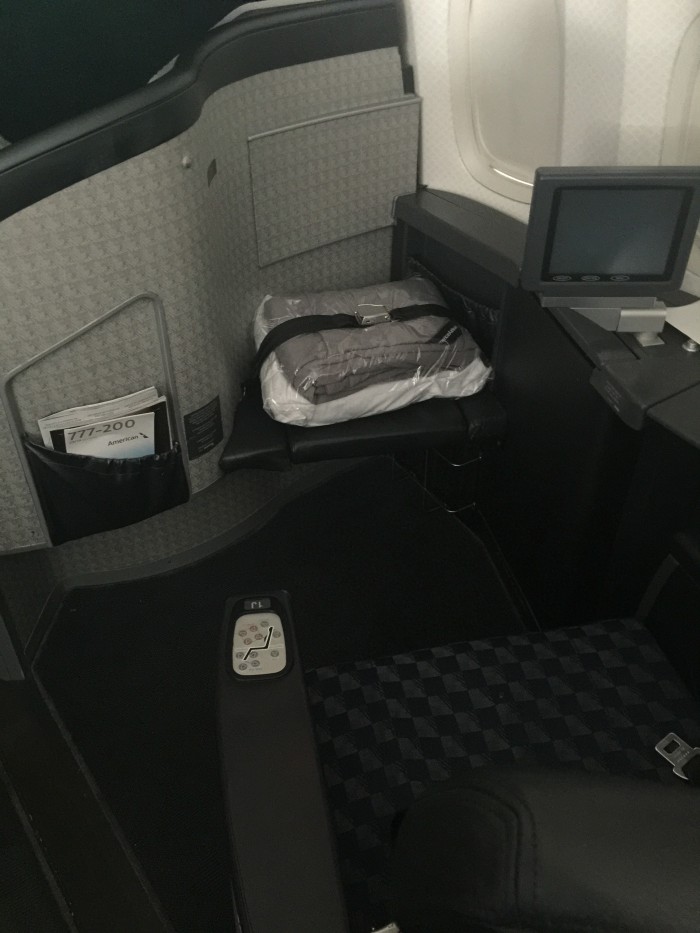 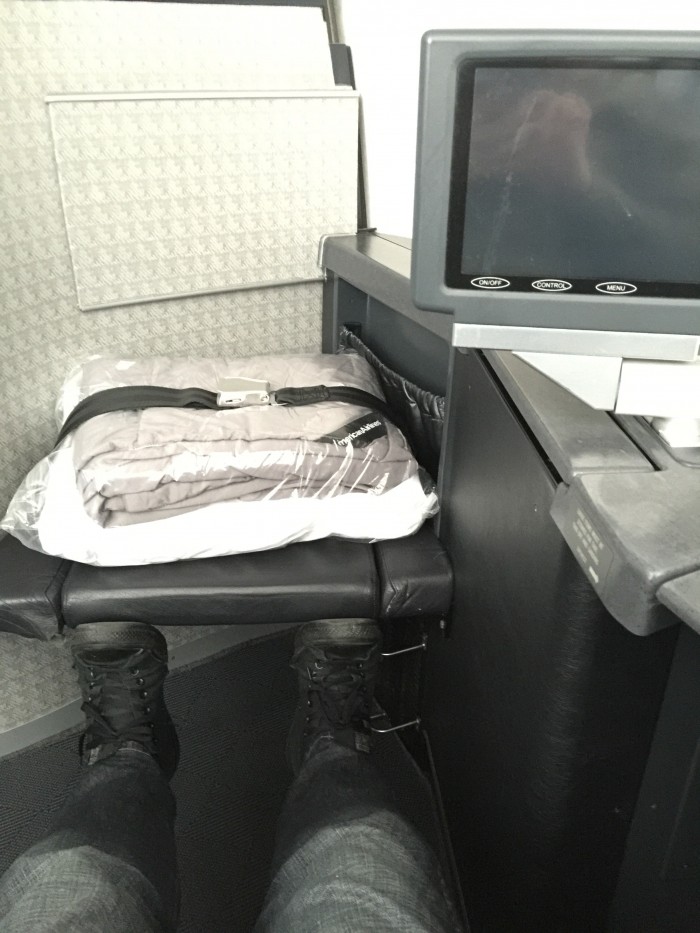 I tried to start watching some movies during the meal service, but the in-flight entertainment system wasn’t working. After a couple of reboots, it thankfully worked. The flight attendant did say that they have tablets available as backups if the main system isn’t functioning. As usual, Bose headphones were offered. Headphones are an area where American has the best offering of any airline I’ve been on.

Since American’s cabins on these 777s are pretty old, the IFE screens are small compared to more modern seats. I imagine this is something that will be fixed when the new business class cabins are introduced.

Despite it being October 3rd, the in-flight movie selection was unfortunately still from September, which was when I had flown to Europe. This was disappointing as there were several movies in the October selection that I would have liked to have watched. I hate how airlines always seem to take a few days to get their entertainment updated, sometimes even longer.

I dug deep and did find a couple of movies to watch. San Andreas was entertaining, in that way that it’s hard to not enjoy anything starring The Rock. I liked it, despite factual inaccuracies such as stating that Nob Hill is the highest point in San Francisco. After that, I re-watched a couple of episodes of the excellent Mr. Robot.

Then, the selection went downhill. Get Hard was just a stupid movie, and everyone involved should be embarrassed. Insurgent was at least tolerable, though I wouldn’t recommend it. The lesson here: try to schedule trips across multiple months so as not to get stuck with the dregs of the inflight entertainment.

The first class seat on American does recline completely into a lie-flat bed, though I never used it that way since it was a daytime flight. It was plenty comfortable in a recline mode where I could put my legs up on the footrest, though the seat is narrower than other first class seats I have experienced. I probably would have been ok on my side (hooray for being a side sleeper), but for others it might be a tight fit. 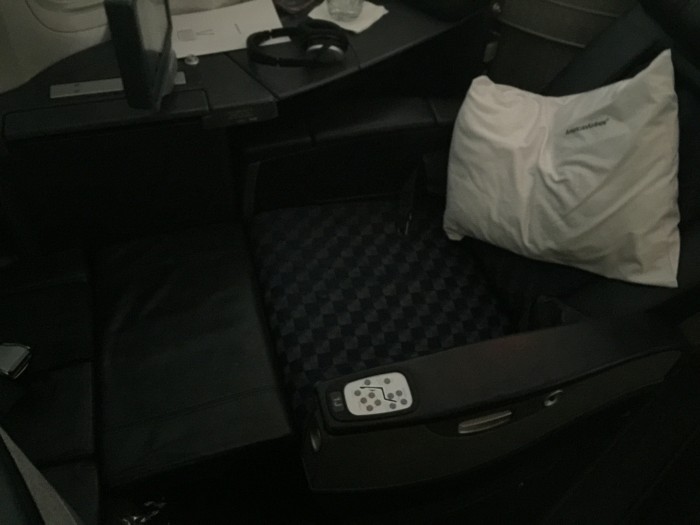 Later in the flight there was a 2nd meal service with a nice waldorf salad with chicken, fresh fruit, and a cookie. 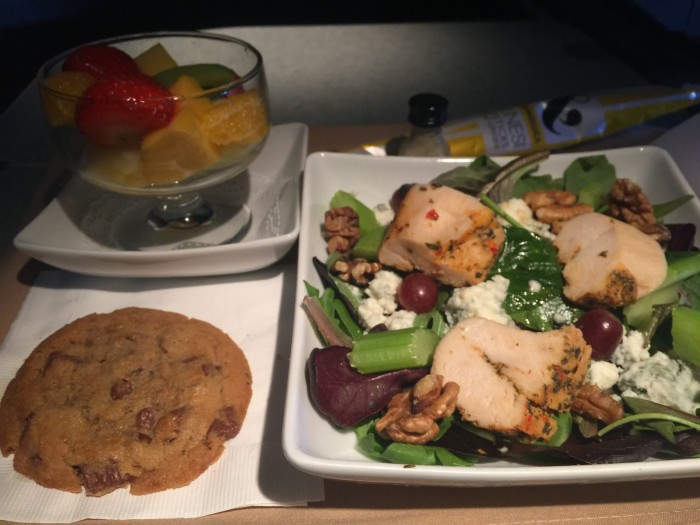 Finally, we were offered chocolates from Lily O’Brien’s. I tore into mine like some kind of animal, as evidenced by the photo below. 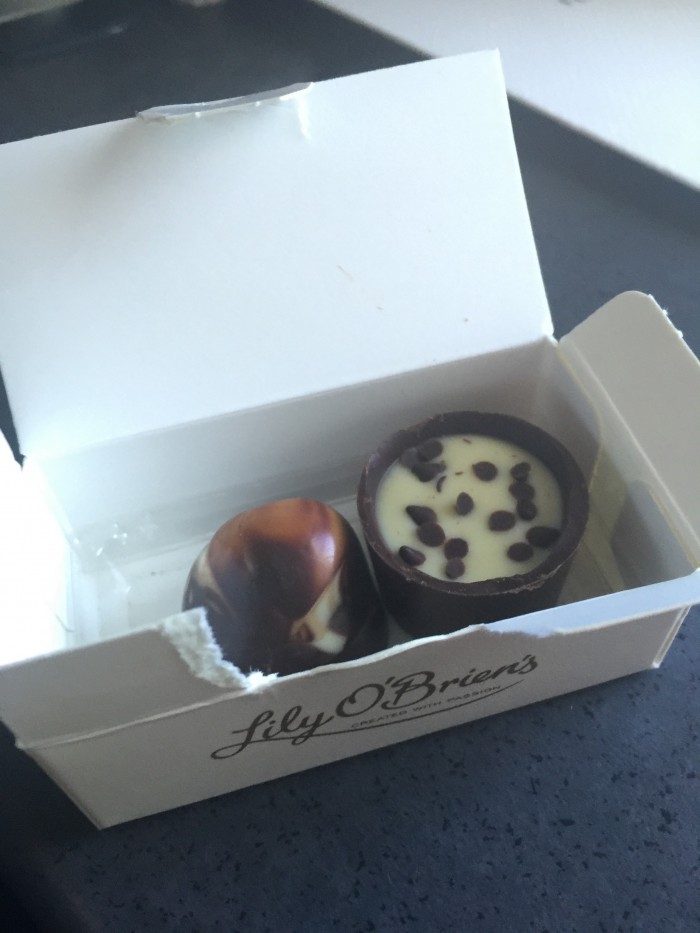 I don’t know if it was because it was a daytime flight or if I just got lucky, but the cabin crew on this flight was great. They came around frequently asking if anyone needed anything, and they were always friendly. Yeah, I would expect excellent service in first class, but I would also expect similar service in business class on American/US Airways and that hasn’t always been the case. This was my first time in first class on American, so I can’t say if it’s a consistent level of service, but I hope that’s the case.

The flight was uneventful, and we landed in Dallas-Fort Worth, where I then quickly cleared immigration and had plenty of time to hang out in the American Express Centurion Lounge before my last flight of the day.