The transatlantic leg of my journey home was in business class on an American Airlines Boeing 767-300 from Dusseldorf to Chicago O’Hare. I had booked the flight as part of a one-way award booking for 50,000 AAdvantage miles.

The check-in line was long, even for priority passengers. There was a family who had pretty much moved in to one of the two desks. Since I had checked my bag all the way home when I had checked-in in Copenhagen, all I needed was a boarding pass & to have my passport checked, which was even more frustrating. Eventually I got my boarding pass and headed to the American Airlines lounge in Dusseldorf, which is actually the Lufthansa Business Lounge.

I’ve never had my passport and boarding pass checked so many times on one trip. Security is good, but if you’re feeling the need to check them every 100 feet, perhaps you might want to look into other security measures? It was a good thing I’d left some time to get from the lounge to the gate, except I then had to sit for a while in the packed, uncomfortably warm gate area.

Finally, boarding of the Boeing 767-300 began. American’s business class on this plane is in a 1-2-1 configuration, with seats in an alternating alignment for each row. As a result, the even rows of the single seats have a seat that is located next to the window, rather than the aisle. If you’re traveling with someone, the middle seats are the best. The odd rows would have you seated closest together across the aisle. 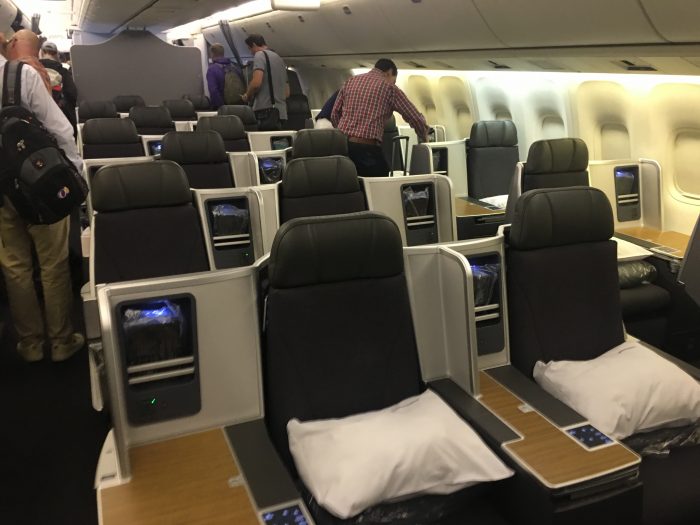 I selected seat 4J, as it was more private & less likely to be jostled by anyone passing. 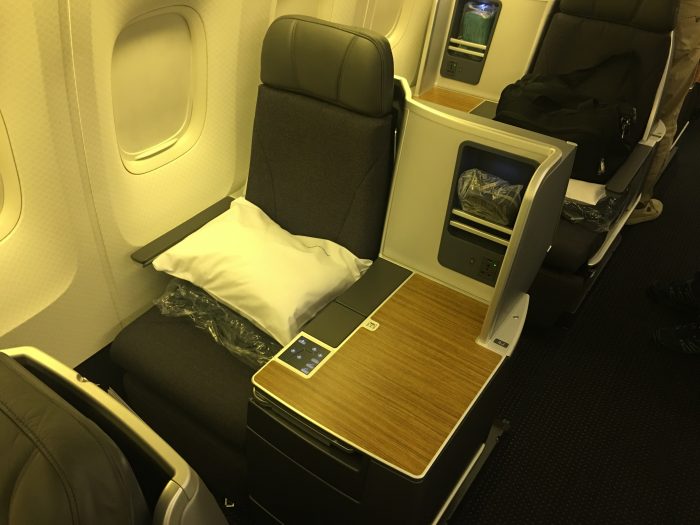 The business class seats are all lie-flat. They all face forward, rather than being in a herringbone arrangement, so they don’t feel as wide at the shoulders as those seats do, but they also have more width by your feet. The seat has a lack of storage space, which is always frustrating. 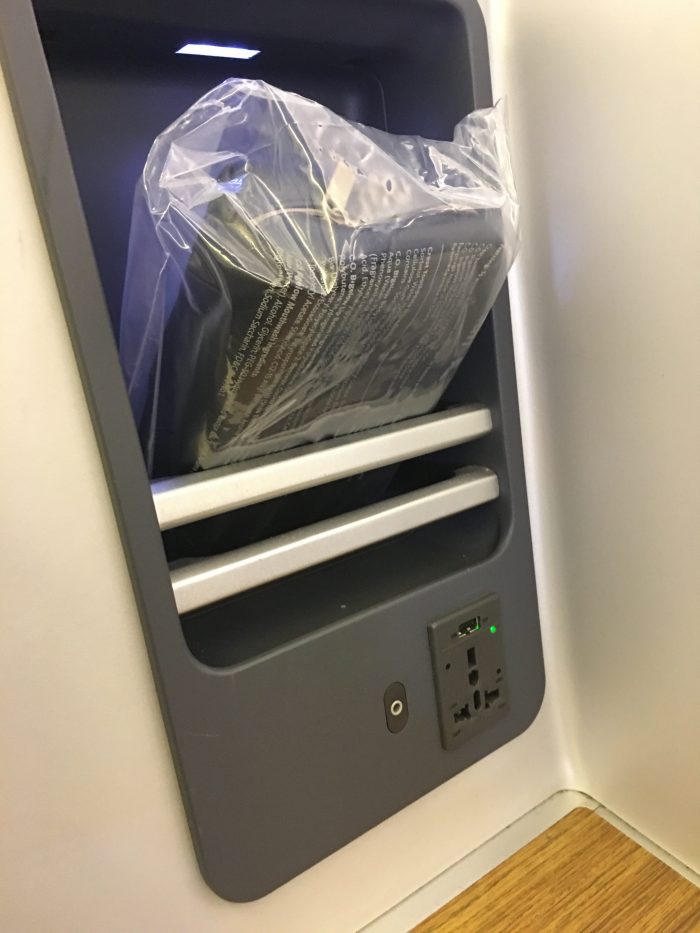 American has selected an odd in-flight entertainment system for these flights. The videos are available on Samsung tablets. This arrangement has pros and cons. The pros are that the technology is easy to keep up to date, and that you can move the screen to anywhere, which is cool if you want to have it closer to you or if you want to lay on your side. The cons are that you have to deal with wires, and you also can’t watch anything during the boarding process as you haven’t yet received your tablet & Bose noise-cancelling headphones.

We pushed back 25 minutes late, and I didn’t get my tablet until 30 minutes into the flight, so it was a boring hour. While I waited, I went through the amenity kit, which was the same Cole Haan amenity kit available on other American Airlines business class flights. Eventually, I watched the decent “Everybody Wants Some!” and the atrocious “Batman vs. Superman”. 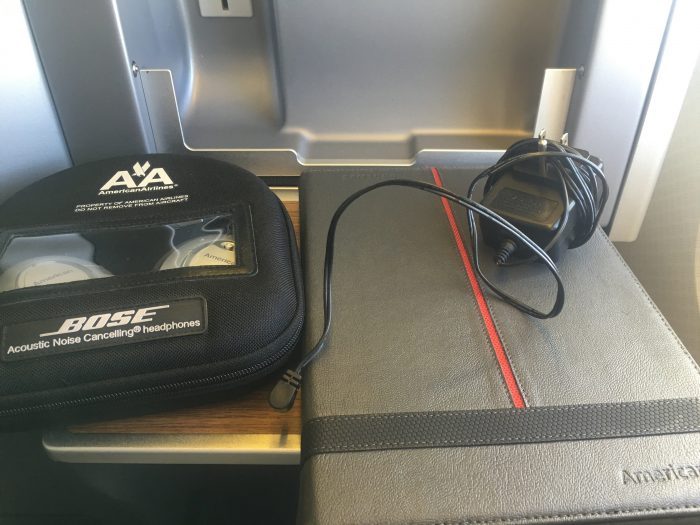 The service was friendly, but it was slow. In addition to having to wait for the tablets, there was no water bottle waiting at the seat. Perhaps this was due to the lack of storage space. Although I saw filled glasses sitting in the galley, nobody was offered orange juice or sparkling white wine (which the flight attendant was very clear to say when we did get them) for a while. I had just sneezed, so I had an OJ. That’s healthy! 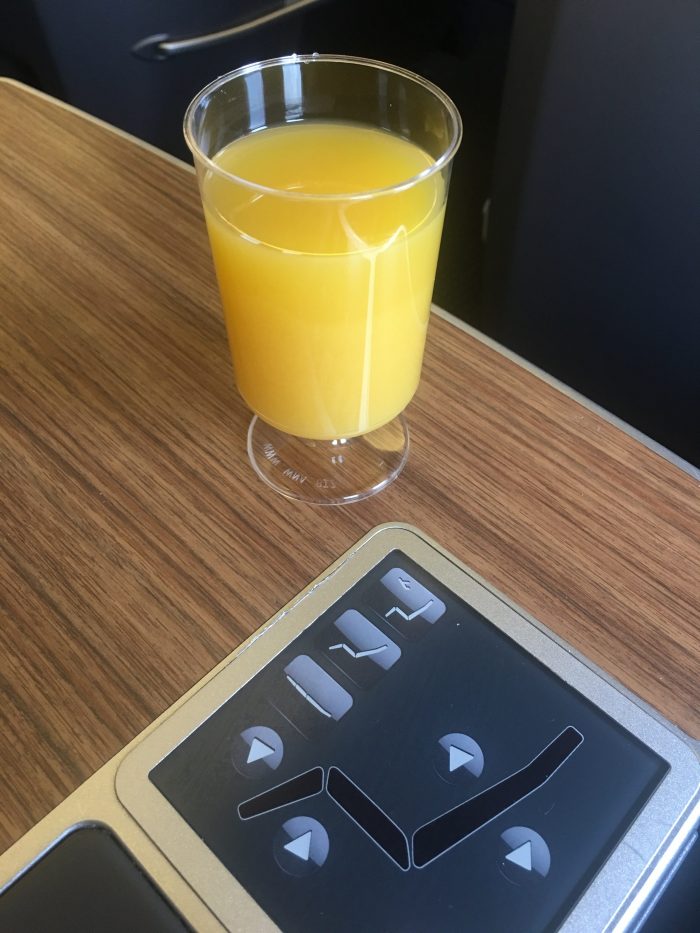 Eventually, meal service began. As on my flight over to London from Los Angeles, I had preordered my meal through American. Unfortunately, the truffle mac & cheese was no longer being offered, so I never got to try it. Here are the business class menus: 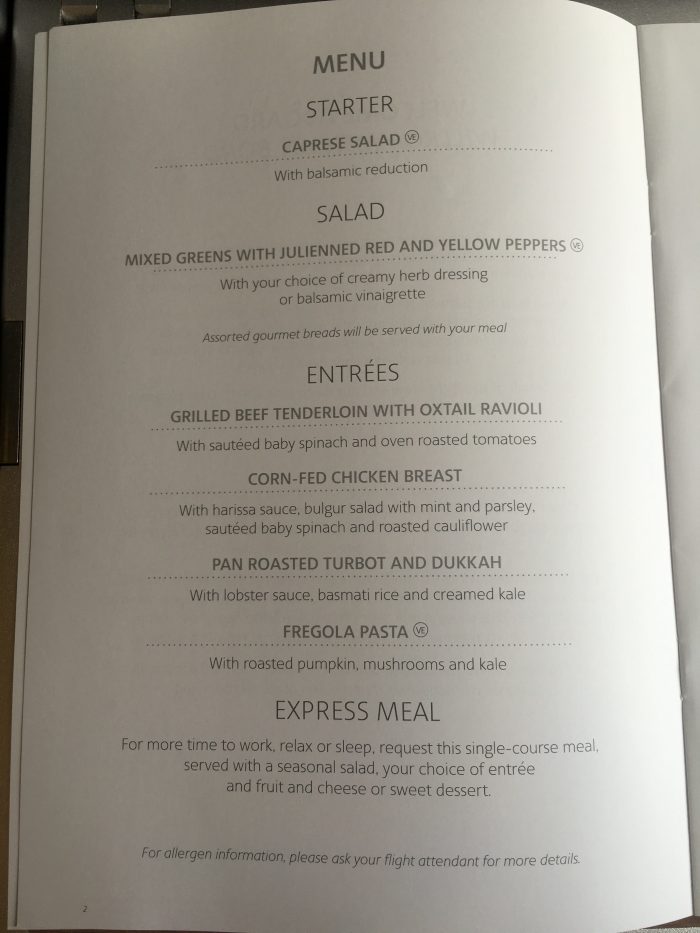 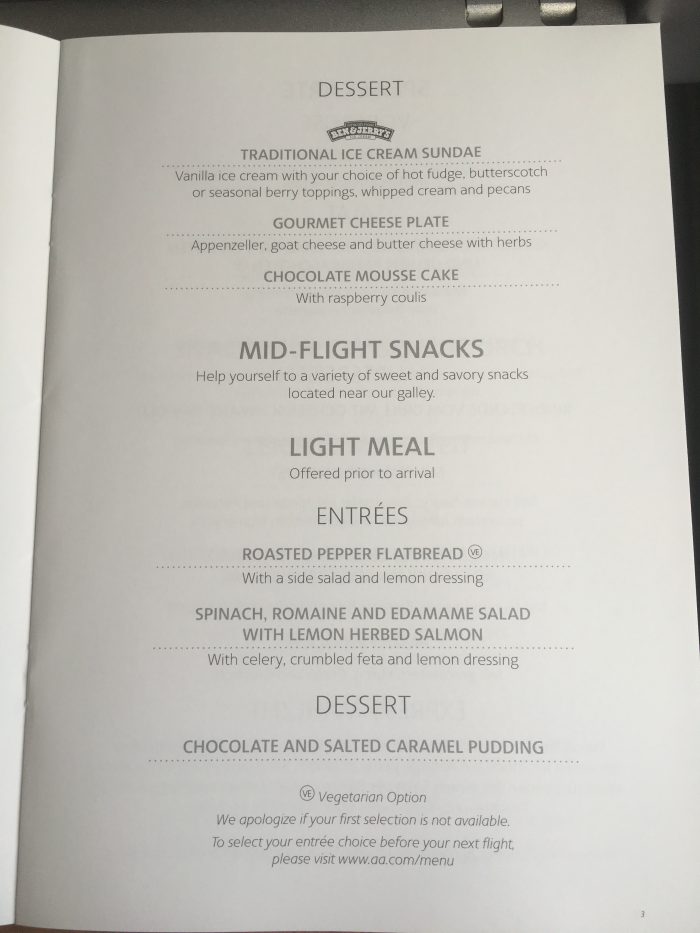 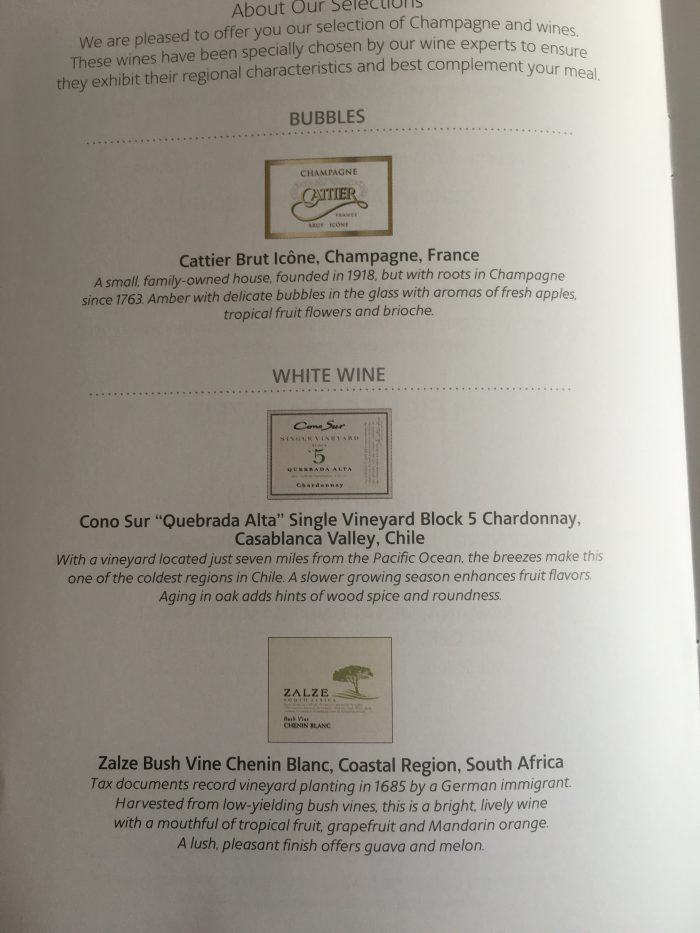 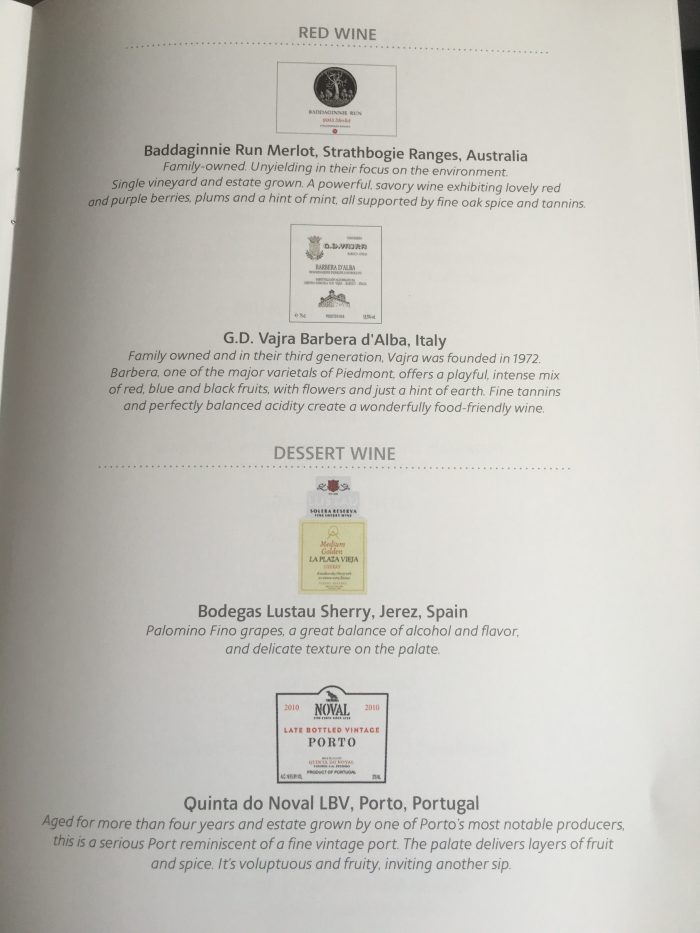 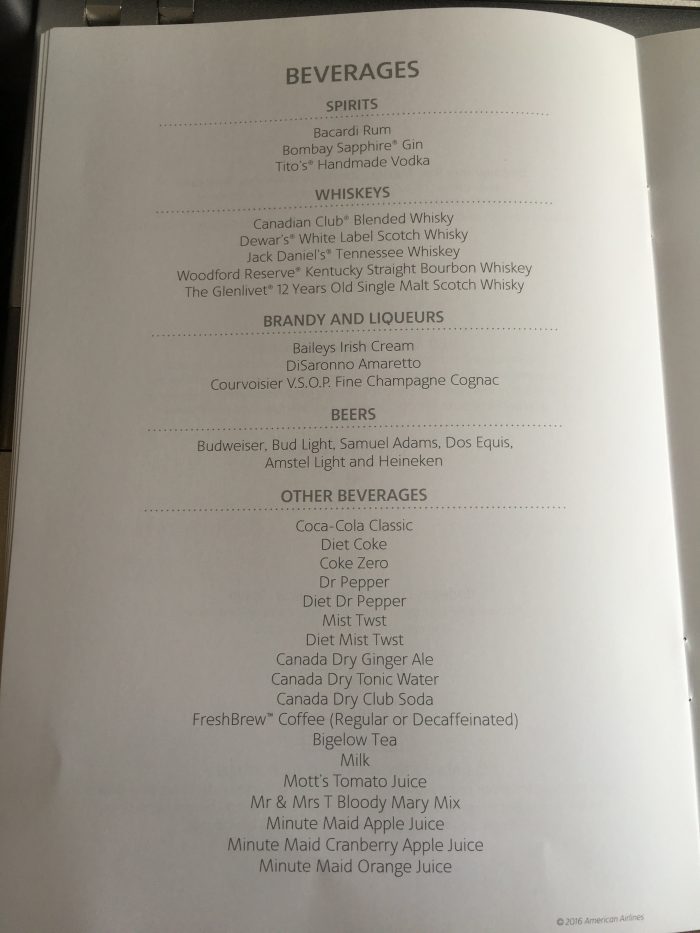 I found it odd that on a 9am departure, they serve lunch. Sure, it’s later by the time they serve the meals, but it’s still weird. I’d prefer a nice brunch, or at least a couple of breakfast options.

The mozzarella was nice, but I hate tomatoes, so those got skipped. 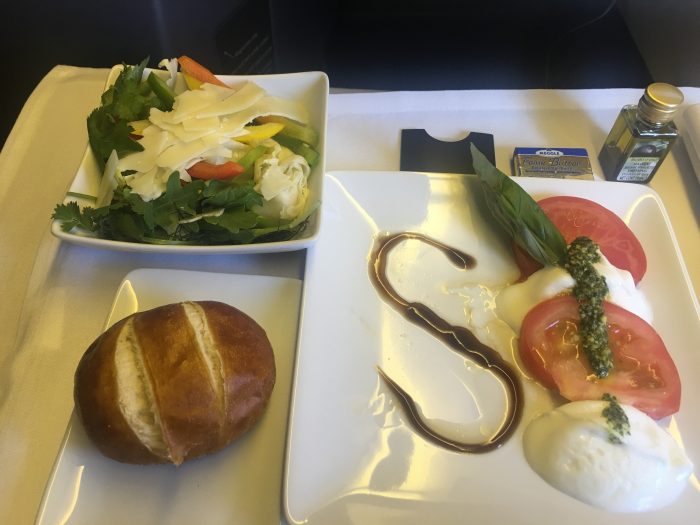 The salad was an odd combination of lots of bitter leaves and peppers. It wasn’t great. The usual pretzel bread was fine, but not really warm. For the main course, the oxtail ravioli was decent enough. The beef tenderloin I had opted for was over done, but still edible (butter helps anything). And there more damn tomatoes. 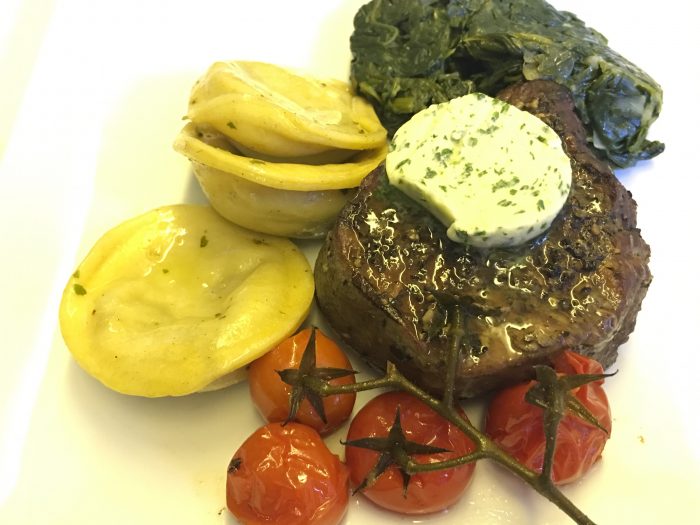 Dessert was a hot fudge sundae, which is simple, but always nice. 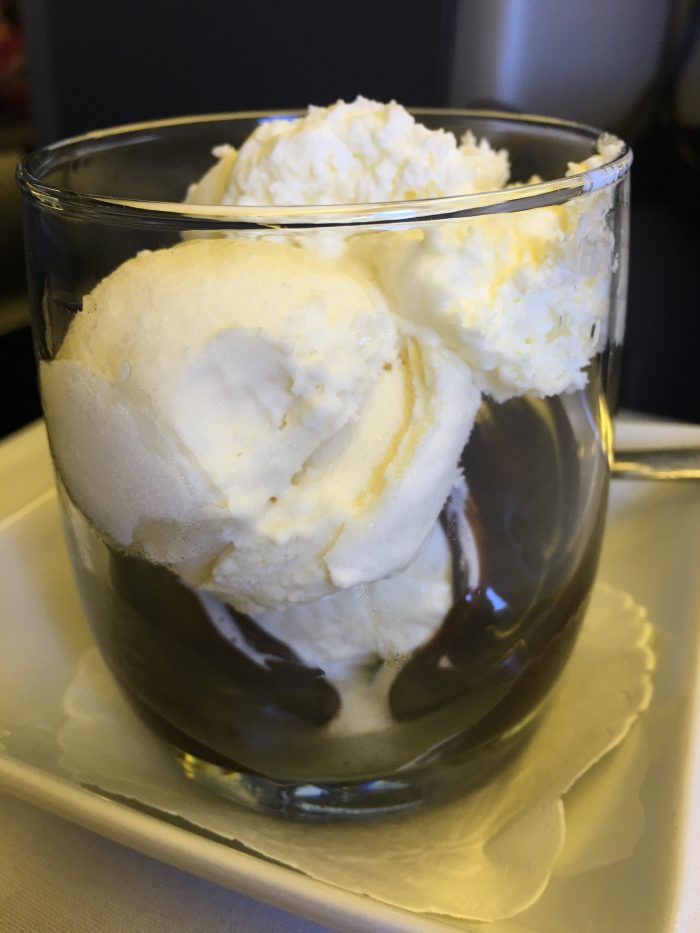 Later in the flight, I had the salmon & edamame salad, which was okay. For dessert, the chocolate caramel thing was outstanding. 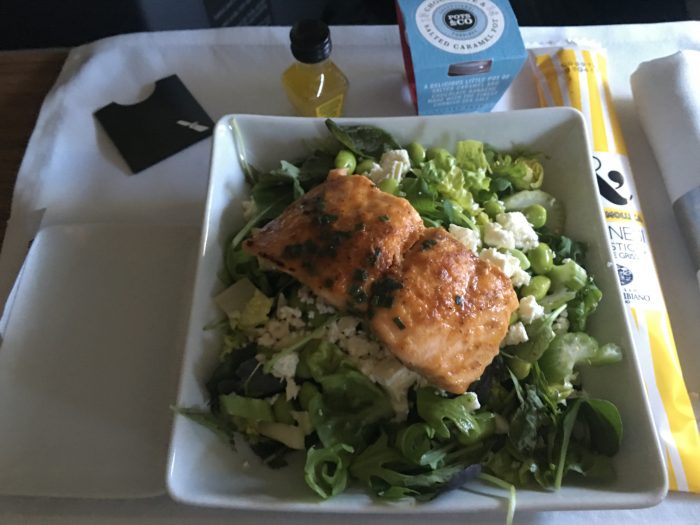 As far as the rest of the flight, it was uneventful. There was no turbulence at all, and after watching a couple of movies, I napped a bit. We arrived at O’Hare, where I breezed through Global Entry. Of course, I then had to wait for my bag because it hadn’t been tagged priority when I had checked into my economy flight from Copenhagen to Dusseldorf. Oh well, I had plenty of time before my flight from Chicago to San Francisco, completing the last leg of my journey to Europe.