Just as I did on my way to Cuba, I had a full 24-hour layover in Cancun on my way back. This time I decided to go to Chichen Itza to see the famous Mayan ruins.

How to get to Chichen Itza from Cancun

I rented a car from National Car Rental once again with no issues, aside from having to walk to the car rental location. I needed cash for tolls, but the ATM in the terminal I had arrived in wasn’t working, so I had to walk to the other terminal. However, in order to do that, I had to leave the secure area. The car rental desk was on the other side, so I had no way of notifying them to send a shuttle. Fortunately, it was less than a 5 minute walk away, so it wasn’t a big deal. I was upgraded to a nice Chevy SUV, which would come in handy later. 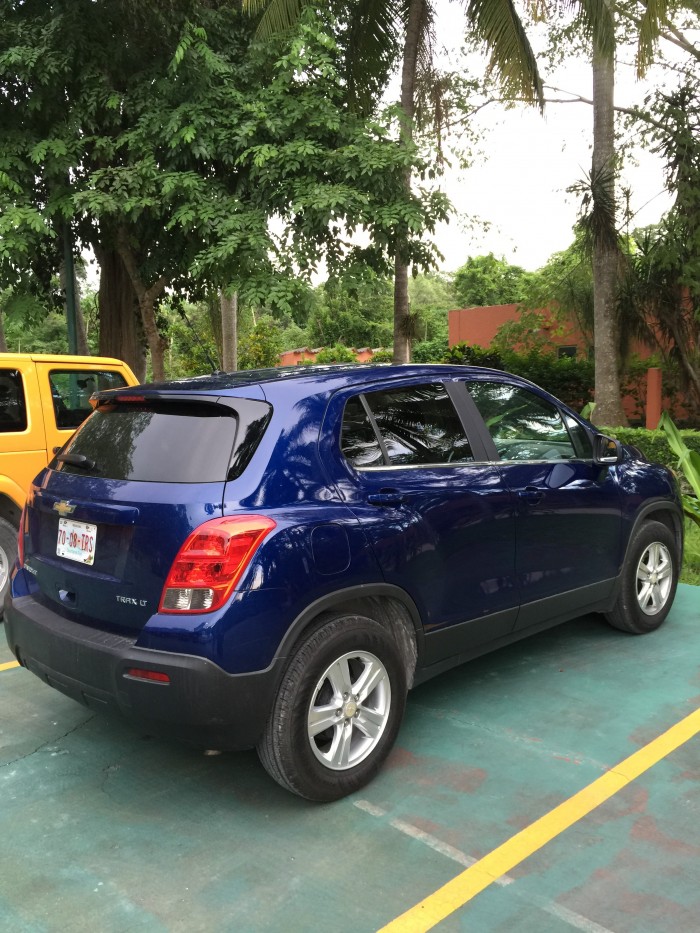 I set off toward Chichen Itza from Cancun. There is a toll highway running from Cancun to Merida, with Chichen Itza being located about two-thirds of the way along the road. I didn’t ask about credit cards since I had taken out cash, but I have heard that the toll booths are cash only, so be prepared. You’ll pass two toll booths, totaling around the equivalent of $25 USD each way. It’s not cheap, but the road is nice.

While the road itself is nice, it’s one of the most unnerving drives I’ve taken. It’s smooth, and pretty straight, but having been cut into the jungle, the Cancun toll highway is oddly claustrophobic. You’re driving in a safe zone while knowing that there is a jungle on all sides that wants to kill you. The two sides of the highway are divided by a bit of jungle, so it’s just you and two lanes. Also, be careful while you drive, as locals often ride bicycles & gather wood along the road. They’ll be on the shoulder, but still, keep alert. Despite the quality of the road, I still wouldn’t want to drive it at night, as it would be pitch black.

One other thing to note is that there are very few gas stations along the way. You’ll have a full tank when you leave with your rental car, but you may want to fill up at the first gas station you see on your way back, depending upon the size of the tank & gas mileage of your rental car. I was able to make it all the way back to the gas station a few miles before the Cancun airport on my initial tank.

I arrived in Chichen Itza with no issues & checked into my hotel, the Hotel Villas Arqueologicas Chichen Itza. You can read my review of it here.

In the morning, I arrived at the quiet back gate of Chichen Itza around 7:45. The scheduled opening time was 8 A.M. 8 A.M. came and went, and a few of us were waiting by the office, which was clearly not going to be opening any time soon. Finally, after about 15 minutes, the employees arrived, and we were on our way. It’s a laid-back place, so it’s not surprising that they wouldn’t open exactly on time, but it was frustrating since I was on a tight schedule to get back to Cancun. 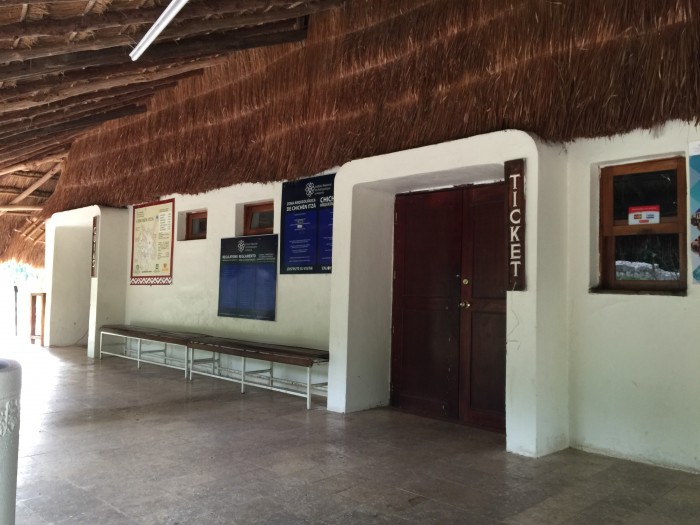 Despite the 15 minute delay, I was the first person on the Chichen Itza grounds who wasn’t an employee. This is how to do Chichen Itza. The ruins are popular with tourists from around the region, and rightfully so. Chichen Itza is a UNESCO World Heritage Site, and it is also one of the New Seven Wonders of The World. As with Tulum, the tour buses arrive from the resort towns at least a couple of hours after the park opens. This leaves quite a bit of time to those who have stayed near the site. In my case, I was nearly done before the first large groups arrived. 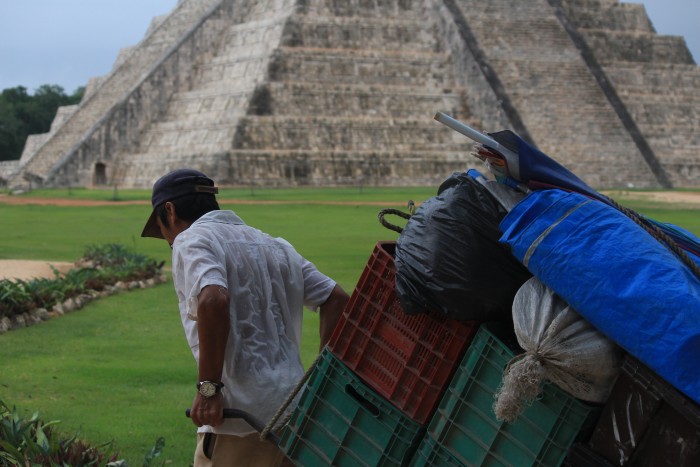 My first destination at Chichen Itza was El Castillo, the giant pyramid that sits at the center of the site. As you walk into Chichen Itza from the back entrance, you can’t miss it. It’s the immediate focal point of the grounds, towering over cleared lawn & jungle surroundings. El Castillo is truly a magnificent sight to behold. 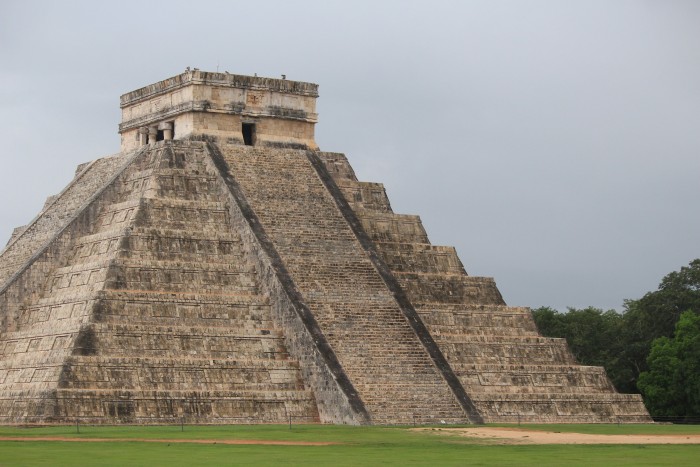 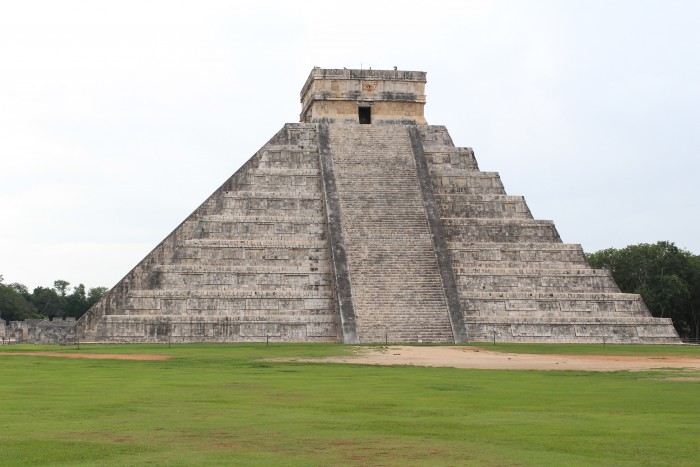 Climbing has been banned on all of the structures, which, although it would have made for a nice view of the empty grounds, is beneficial for taking photos of the ruins without including a bunch of tourists. 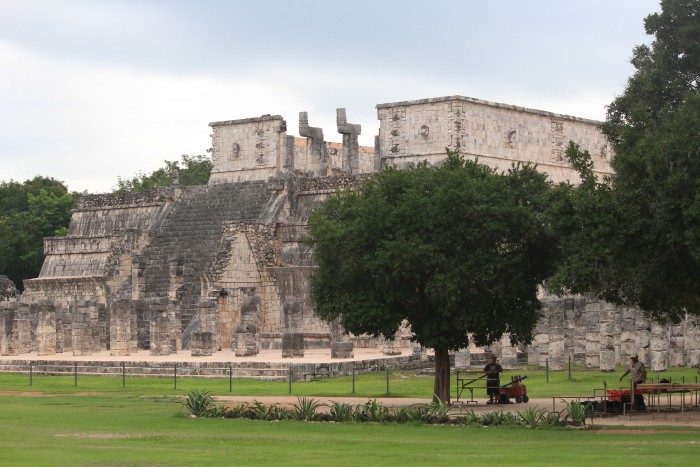 After admiring El Castillo for a while, I headed toward the Great Ballcourt of Chichen Itza. 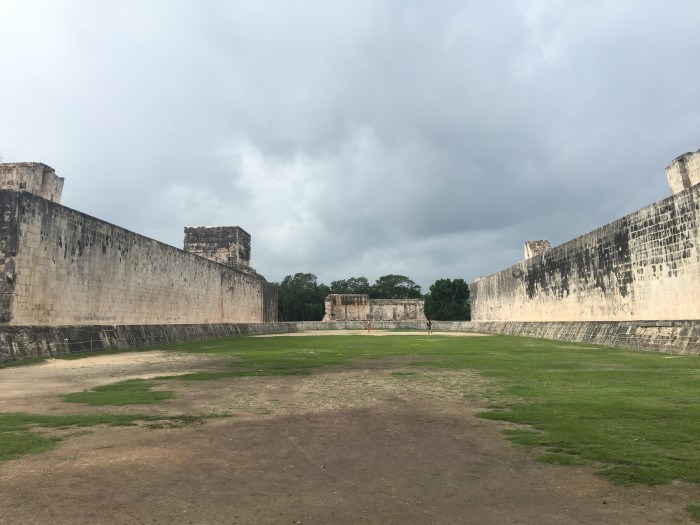 This grand space will be familiar to everyone who learned about the Mayans in school, but here are the details about Mesoamerican ballgames if you want to read more. It’s the largest ballcourt found thus far, and it’s an astounding sight, not to mention an acoustic feat. A whisper from one end of it can be heard at the other. 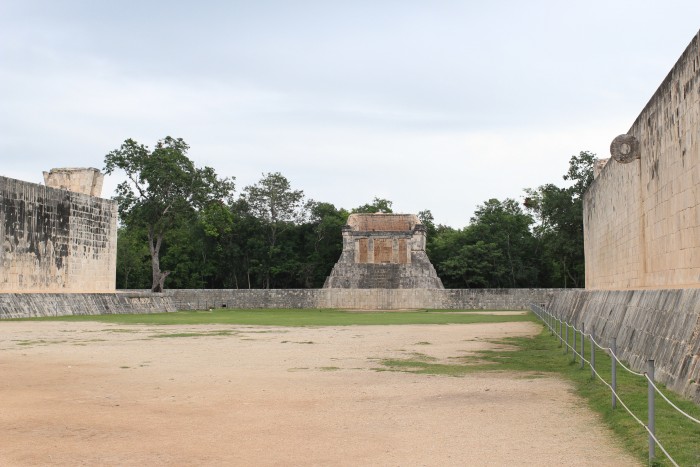 Despite the effects of the elements on the Chichen Itza ruins over the centuries, you can still see many of the intricate stone carvings. 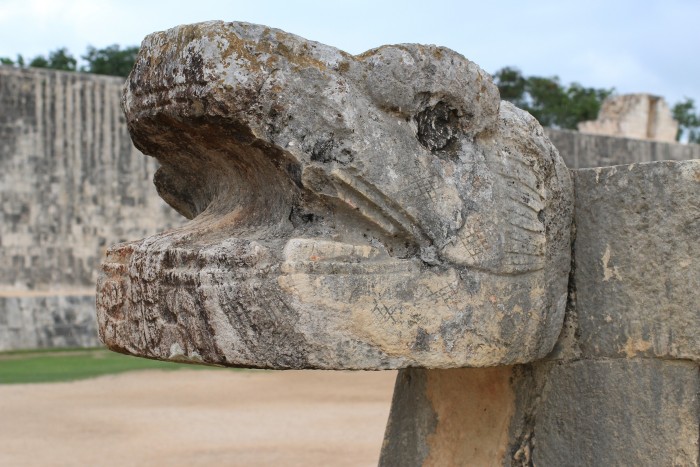 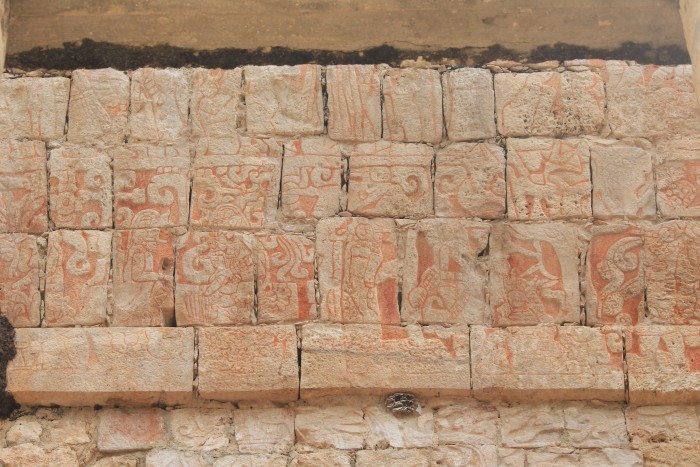 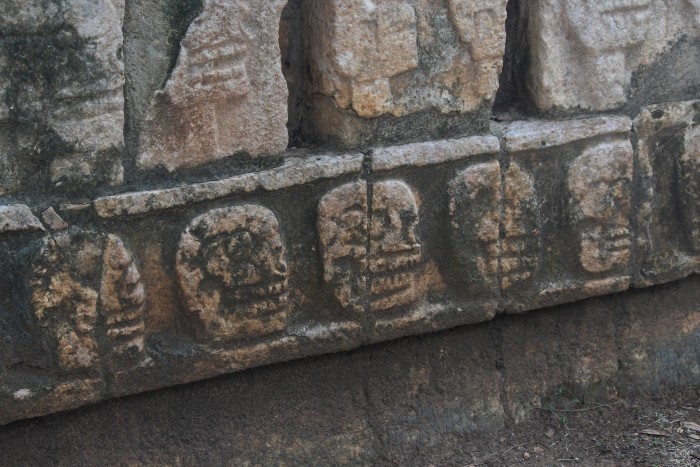 As I explored the Great Ballcourt, the grey skies gave way to a drizzle. It would continue as I walked around some of the smaller ruins. 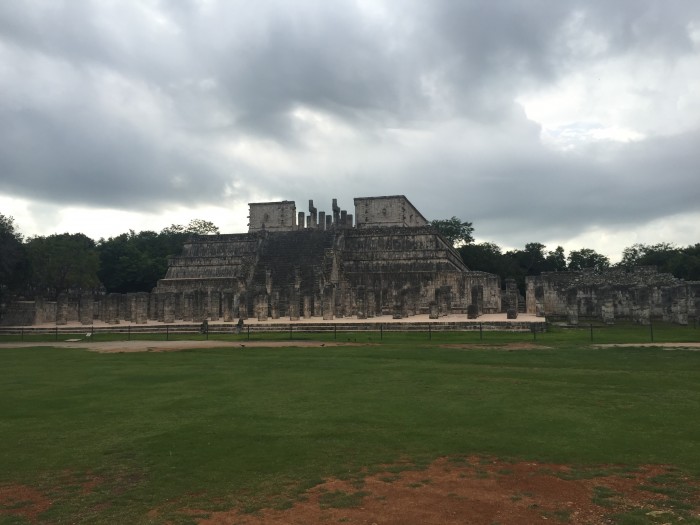 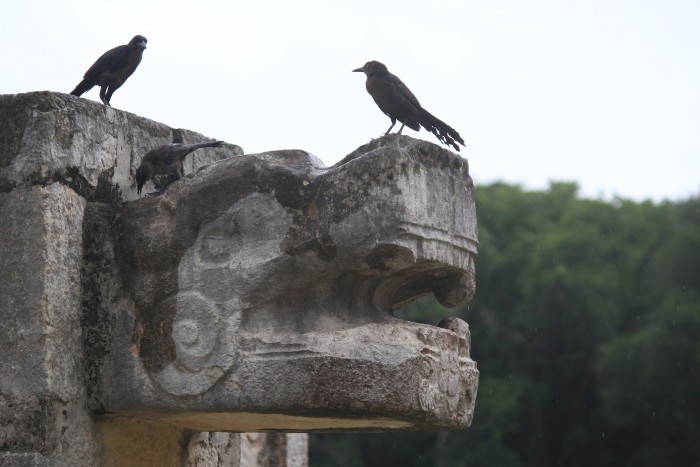 Finally, as I reached the back corner of the Chichen Itza grounds, the skies opened up completely.

It was one of the heaviest downpours I have ever experienced. The locals who sell crafts & other souvenirs were well-prepared and erected tents and tarps immediately. Everyone huddled underneath the makeshift shelters. I’ve heard from some people that the vendors can be rather aggressive in hawking their wares, but whether it was because the bulk of the tourists had not yet arrived, or if it was because they took pity on us all because of the rain, they were nice & not once did they try to sell me anything. While the covering kept us somewhat dry, the rain quickly turned the ground into a lake.

At one point, there was a bit of a lull in the deluge, so I made a run for some other tarped stalls, since the ground looked drier. While I made my run, a group of German tourists laughed at me. I hope they got trenchfoot from staying in what was becoming a lake. 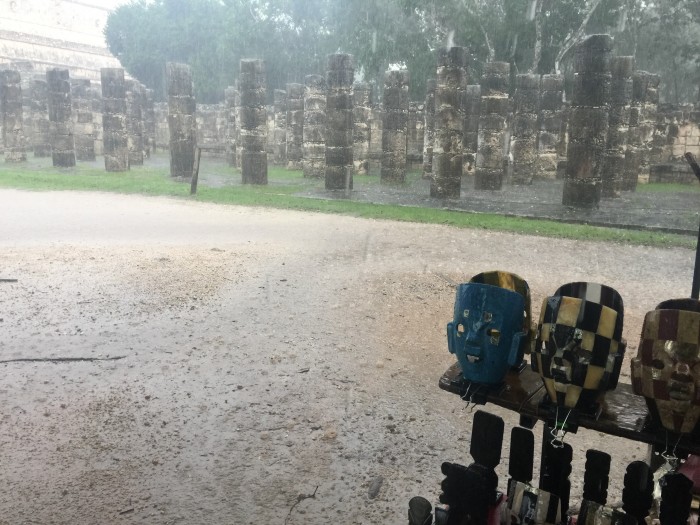 Finally, after about a half an hour, the rain stopped. I headed for El Grupo de las Mil Columnas, a large group of columns tucked back behind El Castillo. My walk through them was cut short, as this part of the grounds had become a massive lake, and I could not go further. 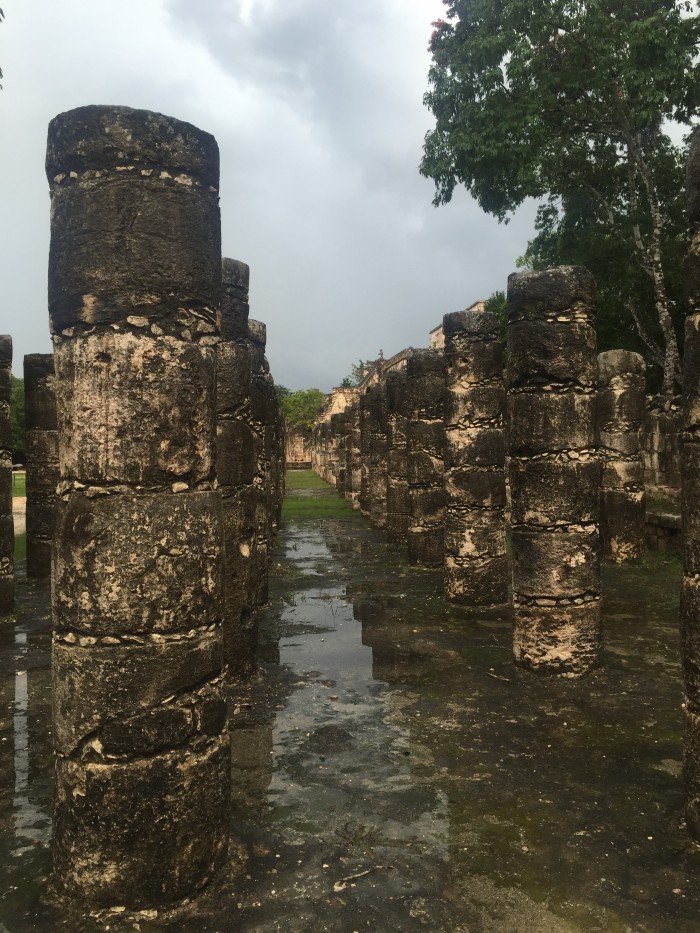 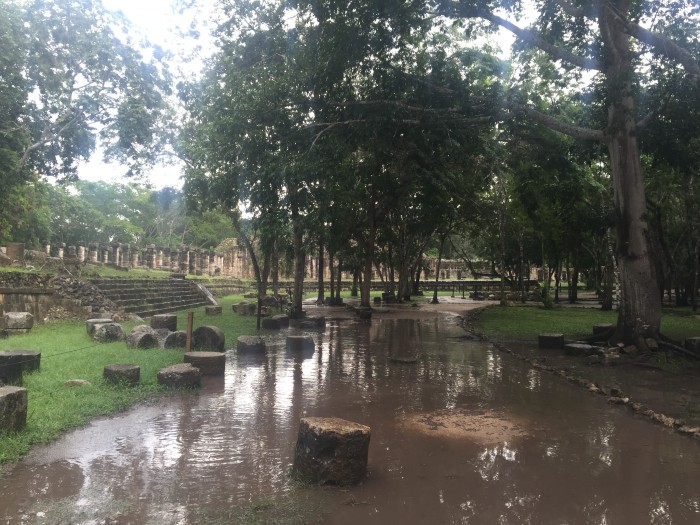 Thanks to the late opening and the rain storm, I did not quite get to see all of Chichen Itza. I was there for about 2.5 hours, and I probably saw 75% of it, missing out on El Caracol (the Observatory). Unfortunately, I needed to get back to Cancun in time for my flight. This is one of the risks of trying to do such a long journey on a layover like this. I don’t mind that I missed a couple of parts, as it gives me something else to look forward to when I go back. You could easily spend 3 or 4 hours exploring the ruins, or even an entire day if the weather is tolerable & you explore every single nook & cranny.

After taking a much needed shower and changing into some dry socks & shoes, I was on my way back to Cancun. Passing through the flooded, the town right outside Chichen Itza, I was glad I’d ended up with the SUV.

The rain would not be done with me. For the most part, I was lucky, having just missed a cloud passing overhead, but on a few occasions I found myself driving through a downpour. I don’t have any photos since I was too busy driving, but there were several storms that passed over the highway. Here’s a reconstruction of my drive:

The toll highway doesn’t have a ton of traffic, and everyone did a good job of slowing down and keeping their distance from each other. This was helpful since there were a few times where the windshield wipers weren’t sufficient at even their highest setting. The lack of dinosaurs also helped.

I made it back to Cancun in one piece, returned the rental car, then set off on my the rest of my journey back to the United States.