Once used for defense, the Seoul City Wall now forms the backbone of a hikeable path circling the city. There are six sections to this path, which makes for a great way to get between various tourist sites in Seoul.  I hiked three of them while I was in Seoul. The first part of my hike around the Seoul City Wall was the Naksan Mountain Trail section. I continued south from there to the Heunginjimun Gate Trail.

After completing the Naksan Mountain Trail section, I found myself at Heunginjimun Gate in busy Dongdaemun. 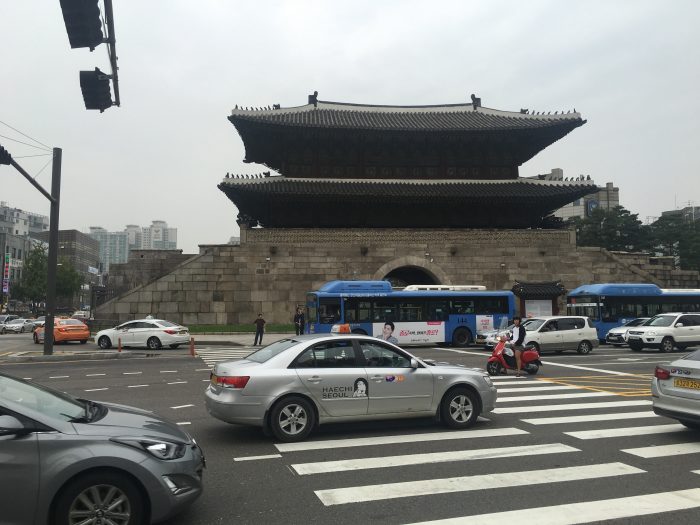 Looking back toward the north, the Seoul City Wall is very clear. Heading south, the wall has not survived or been rebuilt. As a result, large parts of the Heunginjimun Gate Trail roughly follow where it used to be.

The path crosses Cheonggyecheon Stream, which slices through central Seoul. On one hand, the concrete channel seems artificial, but when you consider that it is actually a restoration of a stream that was once buried beneath a freeway, this is a victory for urban renewal. It’s quite pleasant to walk past the trees along the water, a level below the busy city. 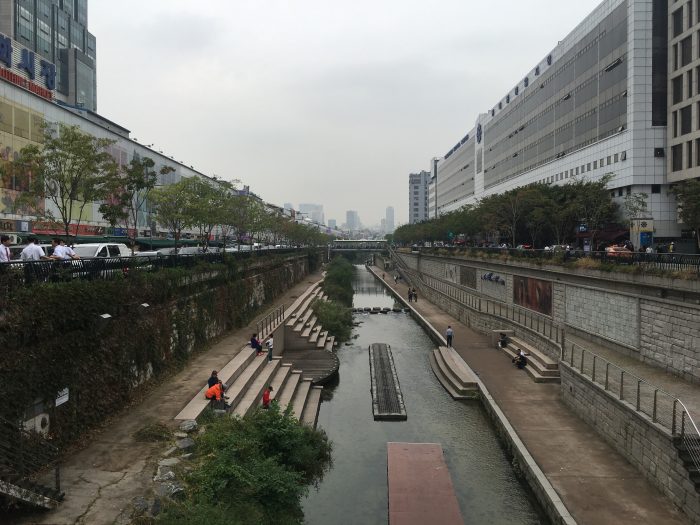 Nearby, there is a market with street food. 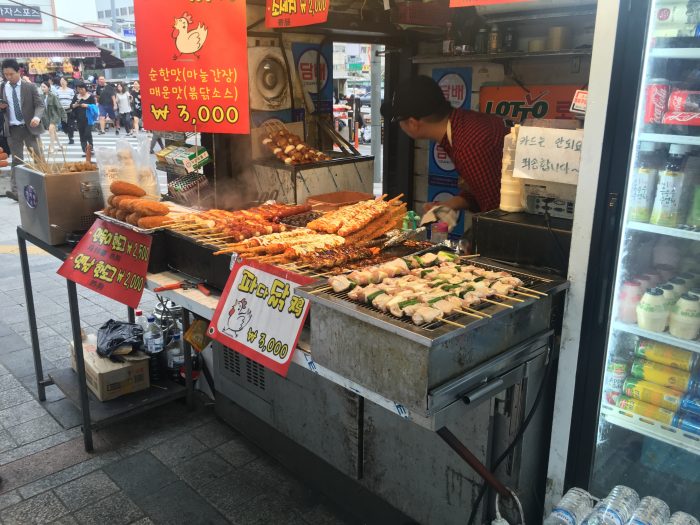 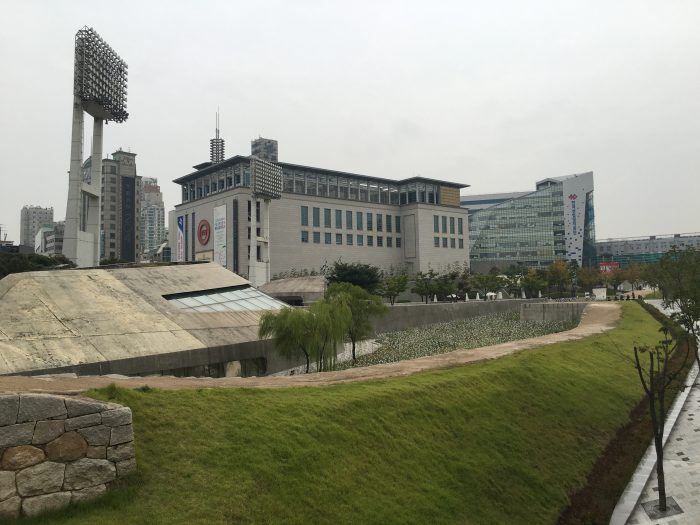 These two parks blend Seoul’s history to the modern era. On the western side sits the Dongdaemun Design Park, a magnificent swirl of a building that houses art & design galleries. 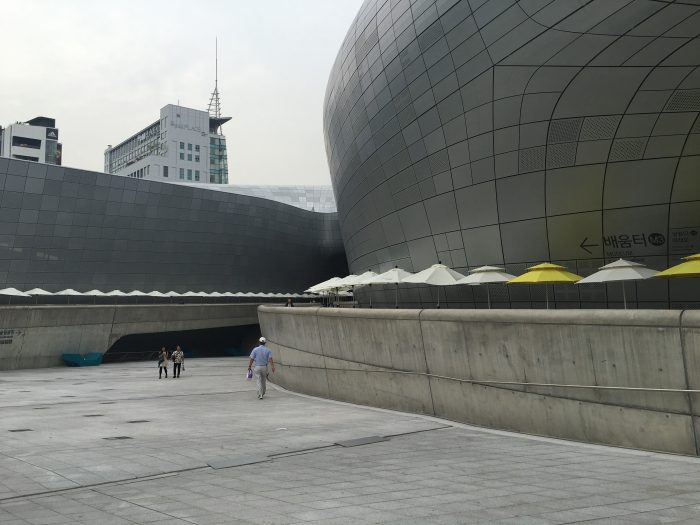 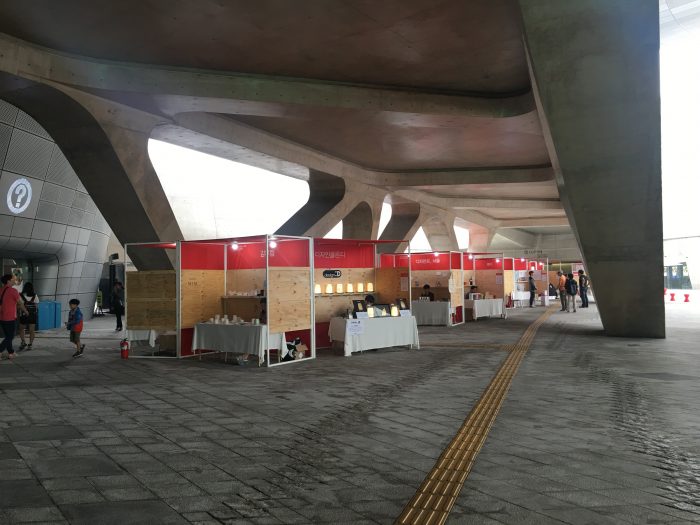 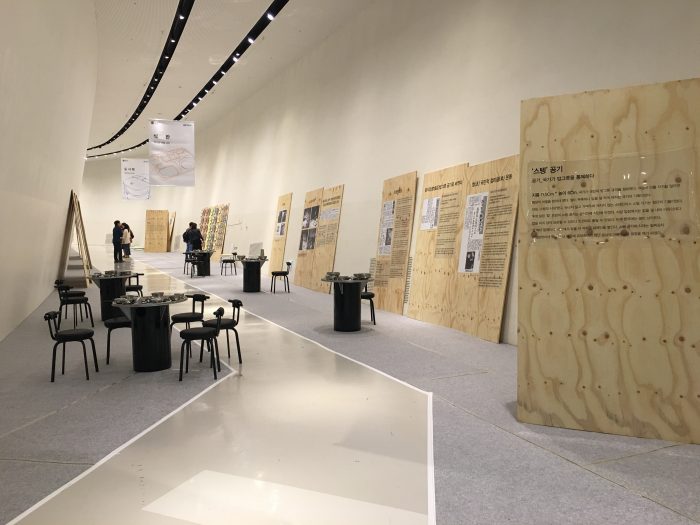 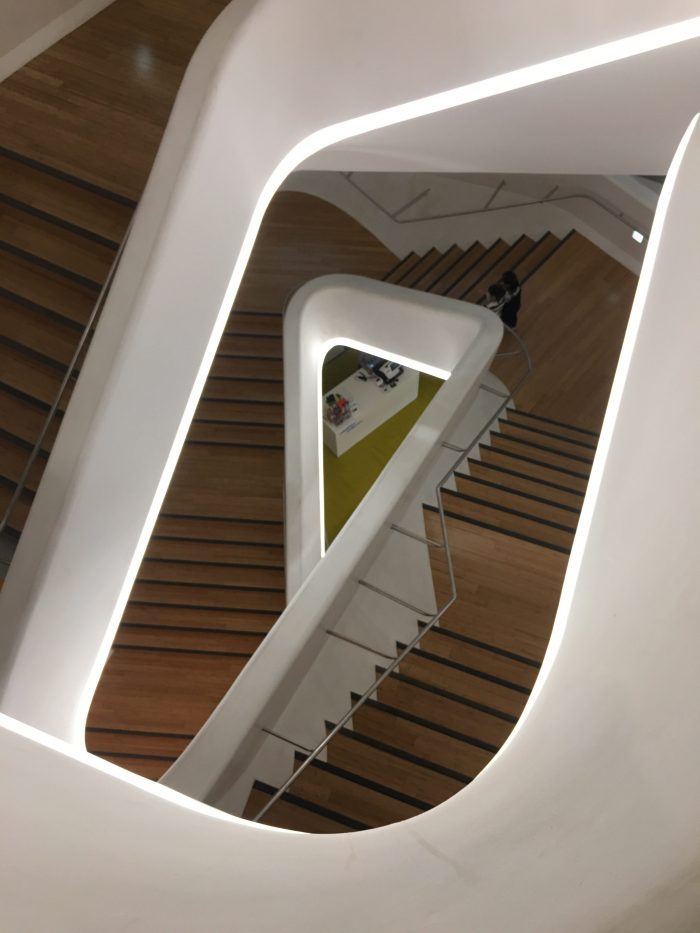 From the roof of the futuristic building, you can look out over the area. 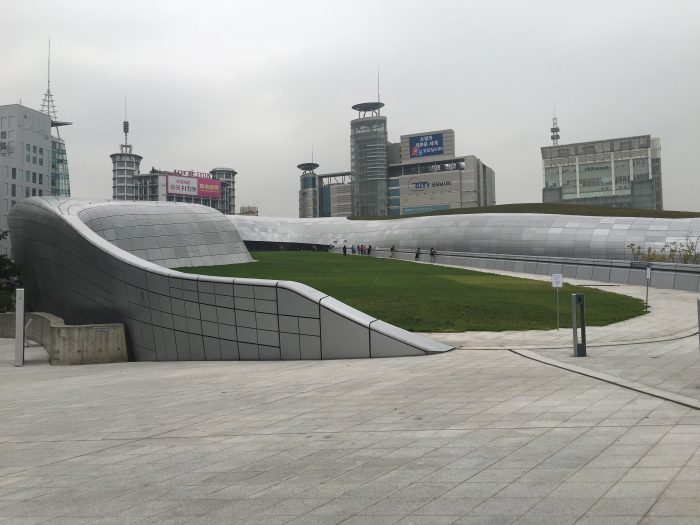 This area was once a baseball stadium. The towering lights have been saved, while the rest of the grounds unearth the remains of what was once the Seoul City Wall that was destroyed when the stadium was built. Some parts have been rebuilt, while others were left as ruins. 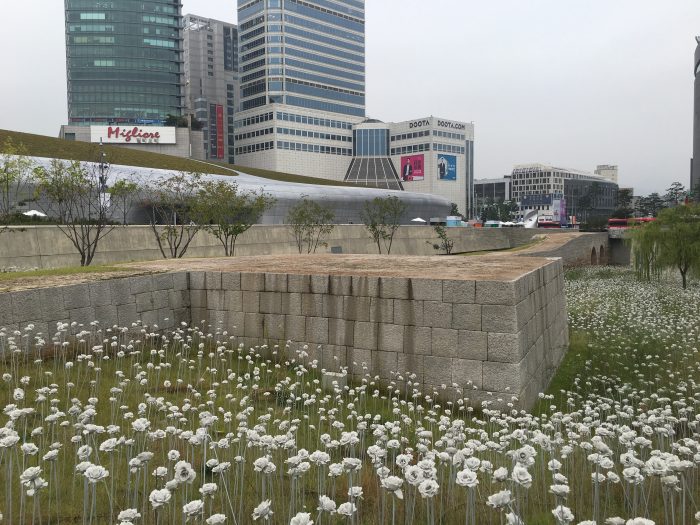 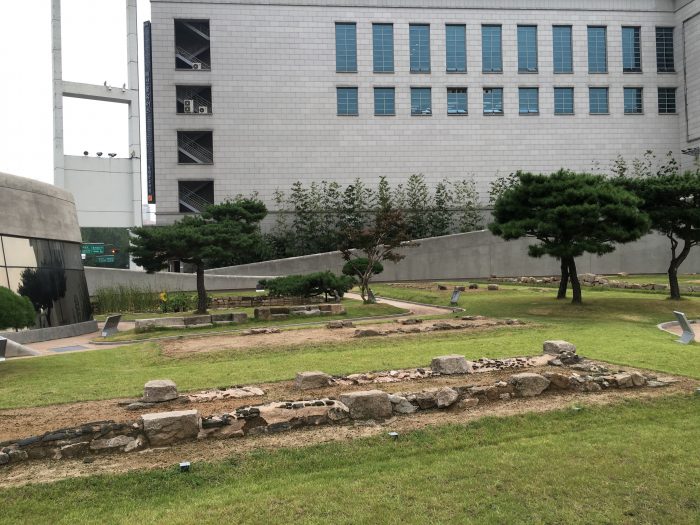 As the Heunginjimun Gate Trail continues, the route becomes spotty once again, as there is no wall or park to guide you. There are signs from the southern end of the design & history park, so follow this sidewalk south toward the Dongdaemun History & Culture Park subway station. If the maze of roads confuses you, the easiest way to continue the urban hike might be to go underground into the station, then come out at exit number 3. This should leave you close to Gwanghuimun Gate. 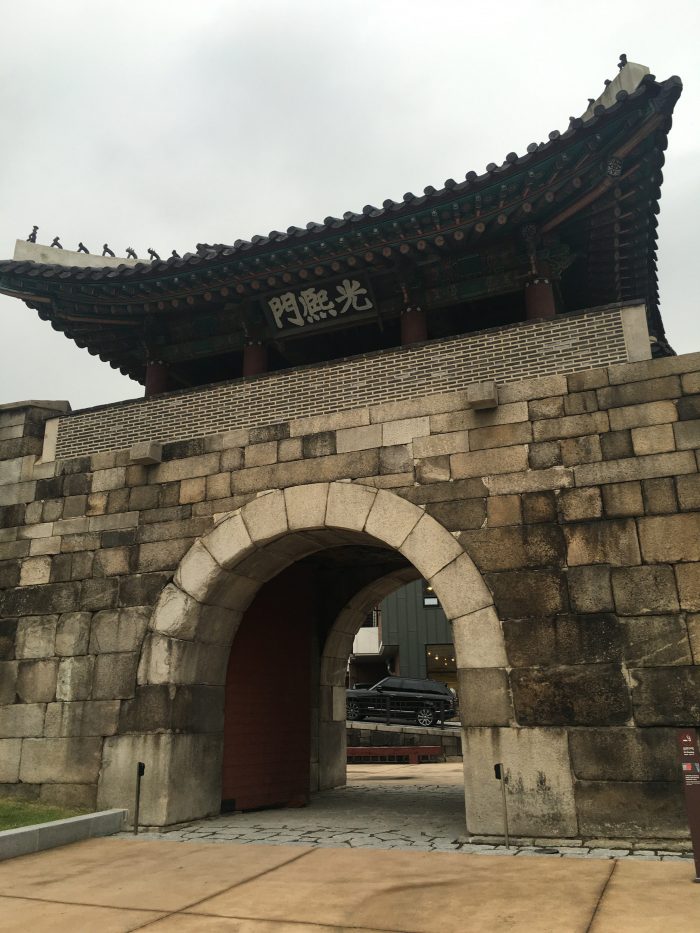 Gwanghuimun Gate is a smaller gate. It would be easy to just look at it from the outside, see the wall heading south from it, and then continue along your way. However, be sure to venture inside, as this is the view you’ll get if you’ll look up. 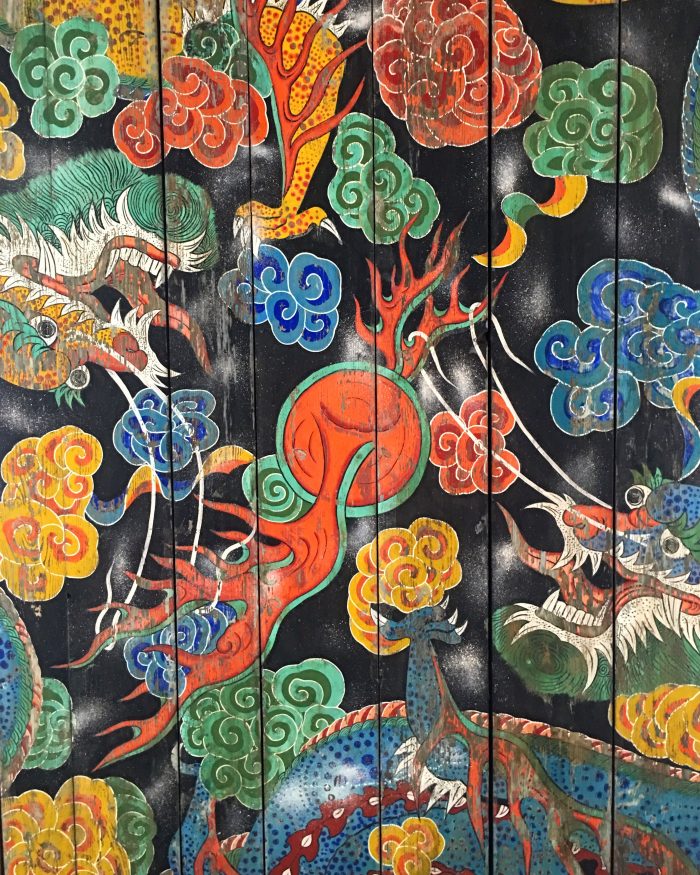 This is one of the few parts of the Heunginjimun Gate Trail where the wall is still visible. After a couple of blocks, the wall ends, and you’re back to following signs to go uphill along city streets. Eventually, you’ll end up at the Jangchung Gymnasium. This marks the southern end of the Heunginjimun Gate Trail section of the Seoul City Wall hike. The next section continues to Mt. Namsan along the Namsan (Mongmyeok) Mountain Trail. 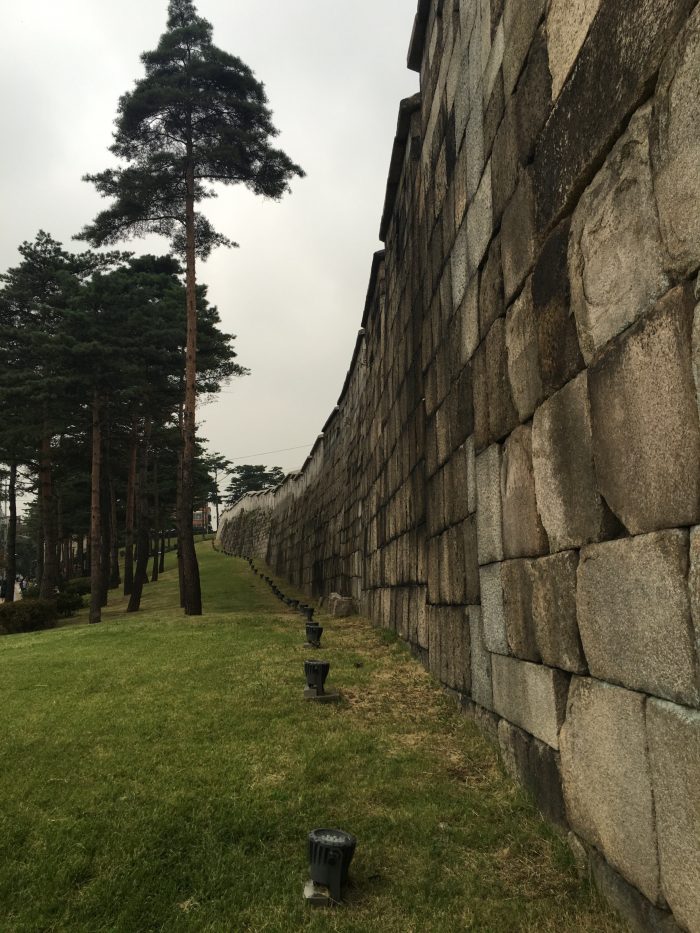 The Heunginjimun Gate Trail isn’t the most exciting section of the hike along the Seoul City Wall. However, the gates are interesting, and the trail does connect some areas that are of interest. While not much of the wall survives in this area, what is left leaves an impression as to how history is integrated with modern Seoul.