While craft beer might not immediately be at the top of the list of things Amsterdam is famous for, the city has an array of interesting craft beer bars & breweries. The bars are especially high-quality, with huge tap lists of great local beers & imports. Here’s my guide to the best craft beer in Amsterdam, including beer bars, tap rooms, breweries, & bottle shops.

Bierproeflokaal In De Wildeman (Beer Tasting Room In The Wildeman)

Bierproeflokaal In De Wildeman (Beer Tasting Room In The Wildeman) is a mouthful to say, but a bar this wonderful doesn’t need to take any shortcuts. The staff & the menus make it clear that this is a craft beer bar that takes great care. With 18 taps & over 250 bottles of Dutch, Belgian, British, German, & American beer, the selection at De Wildeman is outstanding. 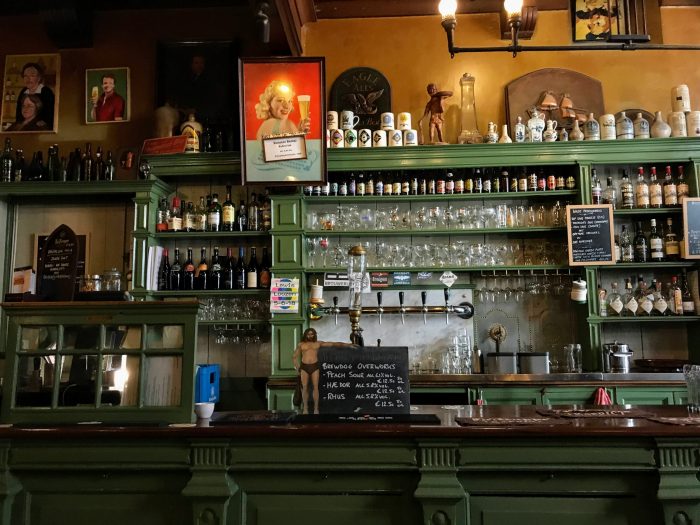 Where the bar shines even more is in the little details. Along with the huge bottle list there was a letter explaining why they had so few IPAs in bottles & cans. In De Wildeman wants to make sure that they are always serving the freshest beer, rather than letting some languish until well past the best drinking date like some bars do. The menu bible also explained all the various styles.

It’s easy for nerdy beer bars like In De Wildeman to be inaccessible to more casual drinkers, but that’s definitely not the case here. The intimate bar has everything you need if you’re obsessed with craft beer, but if you’re a new drinker, they’re also more than happy to introduce you to this beautiful world.

Foeders is located a bit outside of central Amsterdam in De Pijp, a cool neighborhood with lots of bars & restaurants. It’s worth the journey out to this area, as it’s a nice alternative from the tourist-packed center of the city, with a more relaxed atmosphere. 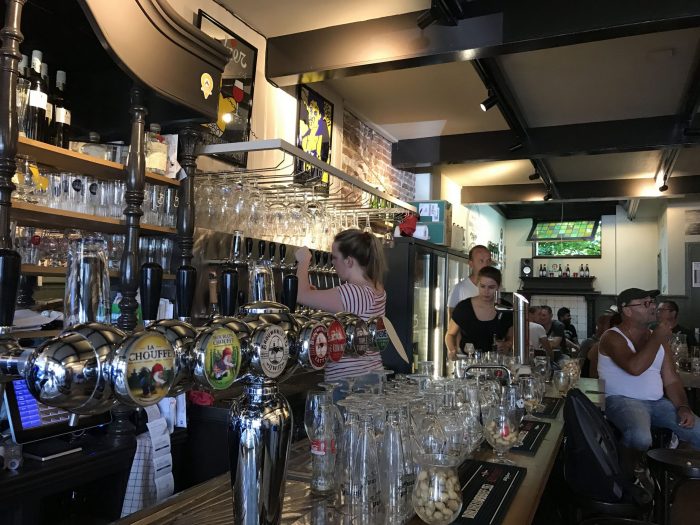 Belgian owner Yuri Hegge knows his beer, and his passion shows in every element of the bar. You’ll find 42 taps of awesomeness at Foeders – a mix of Dutch & Belgian craft beer, served in proper glassware for each selection. There’s also a huge selection of bottled Lambics & other Belgian beers. The bar is both human-friendly & dog-friendly.

Foeders has an intimate neighborhood feel, but it’s a chattier place where you can have great conversations with other patrons & the bartenders while drinking & eating the peanuts whose shells cover the floor. This is the sort of bar that you might plan on stopping in for one beer, only to stumble out of it several merry hours later.

Het Lagerhuys has the same owners as Foeders, but a completely different vibe. This central Amsterdam beer bar has more of a cleaner & brighter upscale feel, with the sort of post-work crowd that might attract (I will never understand people who stand in the middle of a narrow pathway in a bar when there’s plenty of other room & then don’t move even when you’ve said “excuse me” three times).  While the atmosphere might not be as immediately communal as Foeders (to be fair, few bars could ever hope to achieve this), the beer & food selection at Het Lagerhuys is outstanding, & the staff members are friendly & knowledgable. 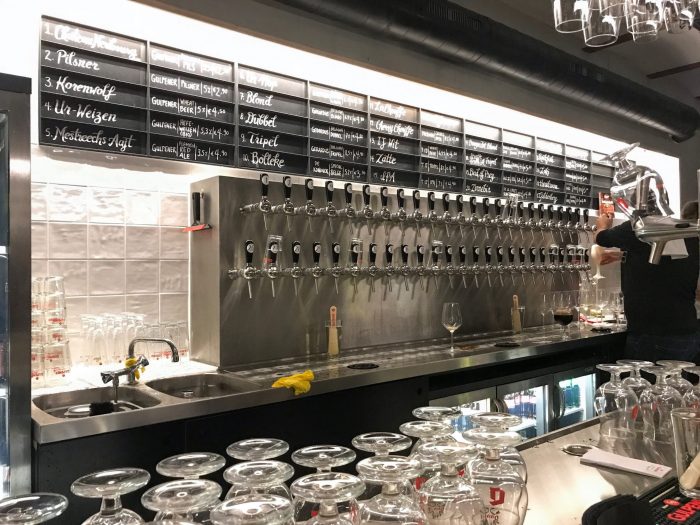 With 51 taps, about half of which rotate, (look for the chalkboards as you enter to see the latest selection), plus a large wine menu, there’s plenty to drink. The comfort food menu has dishes such as the fantastic spicy chicken & waffle, which held no punches when it came to the spice level. 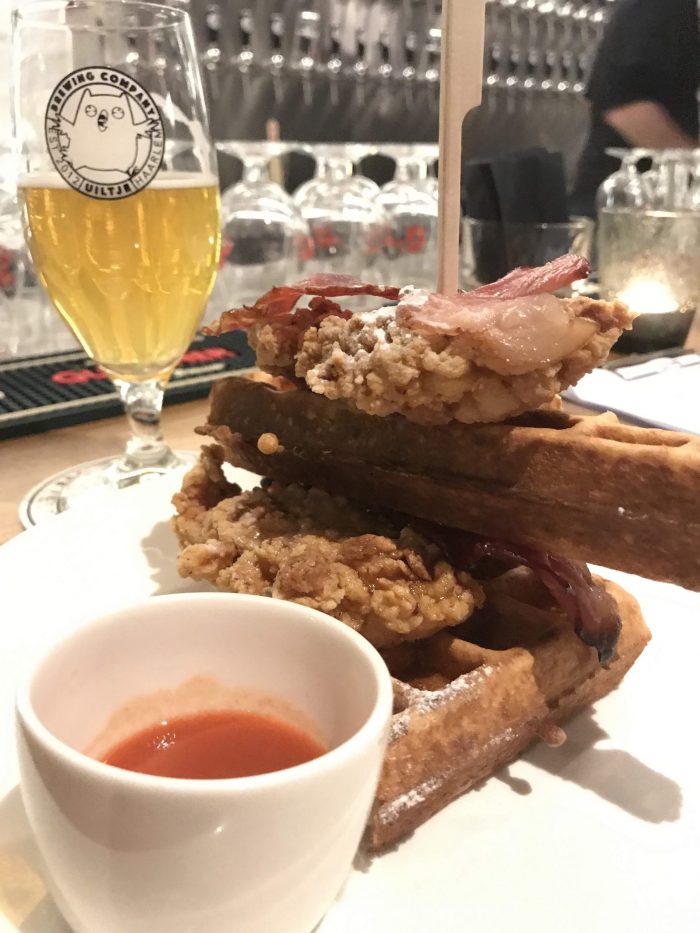 Proeflokaal Arendsnest is heaven for Dutch craft beer lovers. You won’t find beer from anywhere else here, but who needs it when you’ve got 50 taps and over 100 bottles of the best beer from around the Netherlands? 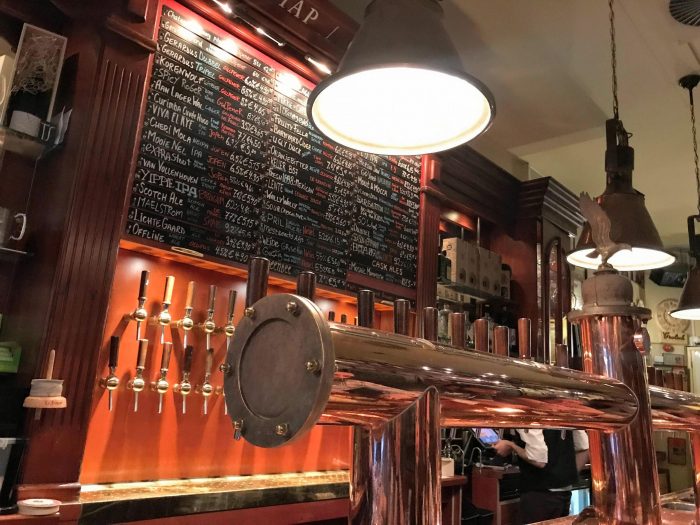 As if that’s not enough, there’s also a fantastic selection of Dutch cheese, since nothing goes better with great beer than great cheese. 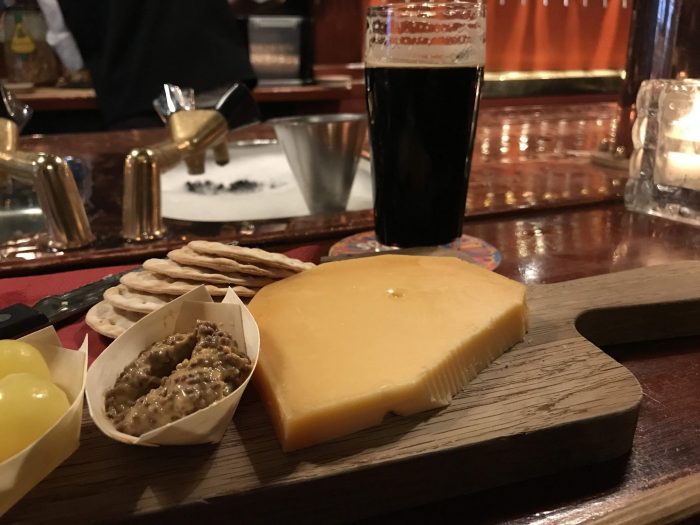 The staff at the bar are happy to talk about local beer. The tasting room also hosts a few beer tastings each week where visitors can taste a variety of brews & learn more about them.

While the inside of Proeflokaal Arendsnest feels like a traditional Dutch bar & tasting room, outside there is a canal-side terrace to sit on. It’s a quintessential Dutch beer experience right in the heart of the city. This is another can’t miss bar if you’re seeking the best craft beer in Amsterdam.

Beer Temple is an all-American beer fest with 30 taps plus over 200 cans & bottles. This is the place to go if you’re looking for the absolute best American craft beer in Amsterdam, as they really have a special selection.

The name of Beer Loves Food says it all. 30 beer taps are met with a larger food menu compared to the snacks that most Amsterdam beer bars serve. 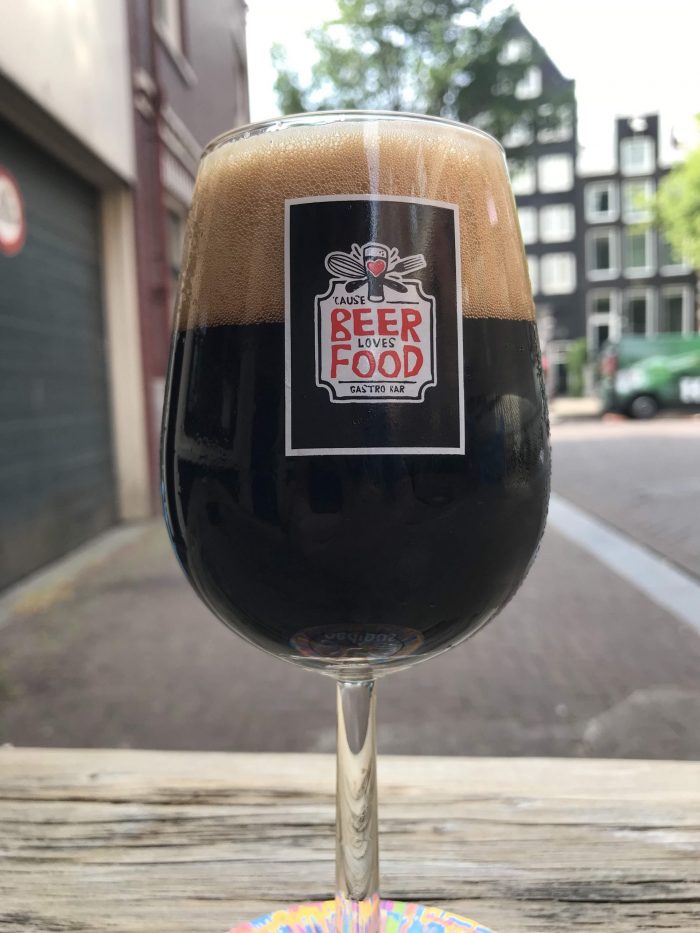 Craft & Draft has a 40+ tap selection just north of Vondelpark. 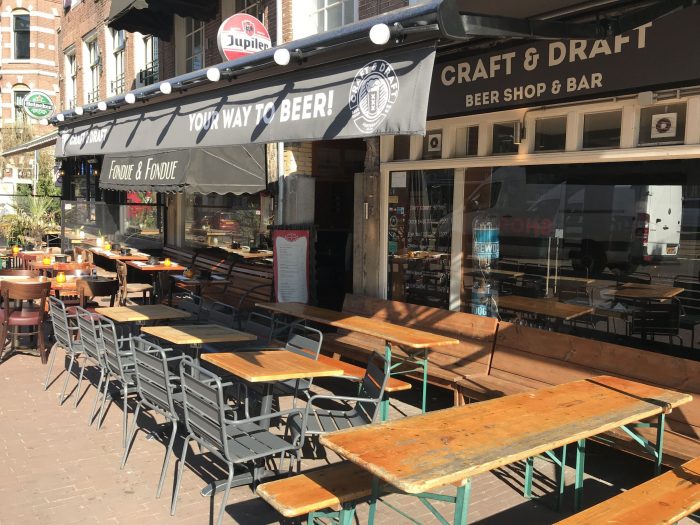 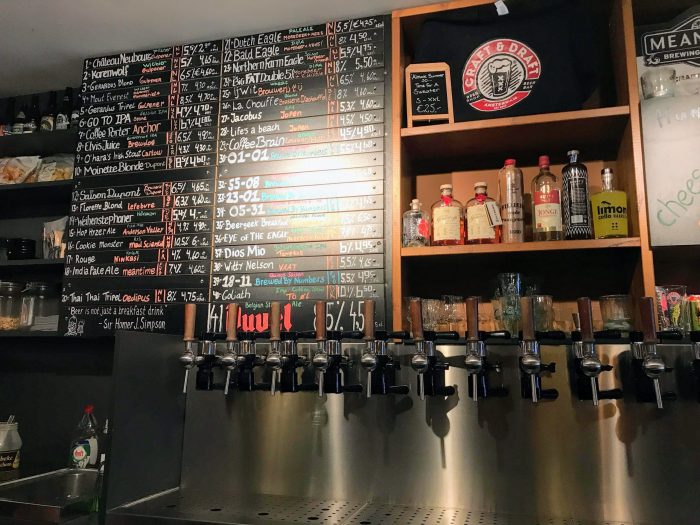 The 4 bars mentioned directly above (Proeflokaal Arendsnest, Beer Temple, Beer Loves Food, and Craft & Draft) are all affiliated as part of Morebeer. All of the bars feel completely different, so you’d never know that they are associated with each other unless you look closely. However, there’s a special Morebeer Tour that you can do. Visit all four beer bars in Amsterdam in one day (keeping your receipts), and you can get a commemorative t-shirt with a final stop at Craft & Draft. Since all of these bars are nice in their own ways, it’s worth considering the achievement if you’re up for a long day of great beer.

There are a few Gollem locations scattered around Amsterdam. The most centrally located, Cafe Gollem Raamsteeg opened in 1974, making it the oldest craft beer bar in Amsterdam. 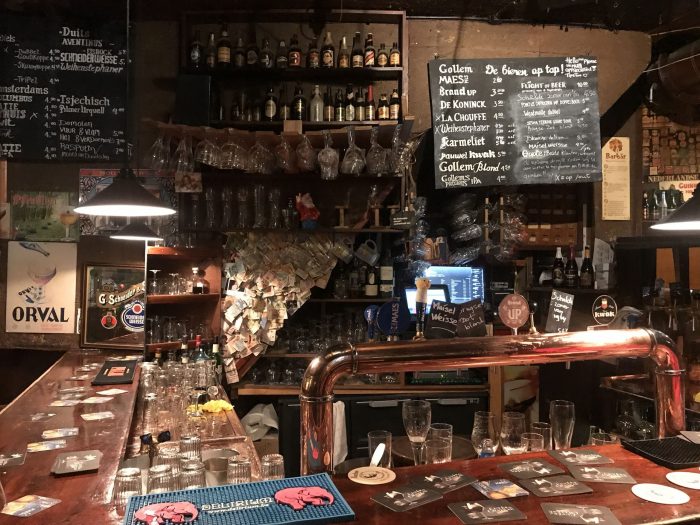 The Gollem bars (Cafe Gollem Raamsteeg, Cafe Gollem in De Pijp, Gollem’s Proeflokaal, Gollem Aan Het Water, & Het Elfde Gebod (The Eleventh Commandment)) all have hundreds of beers, with a strong Belgian selection. The Raamsteeg location is particularly cozy, but all of the bars have knowledgeable passionate staff. 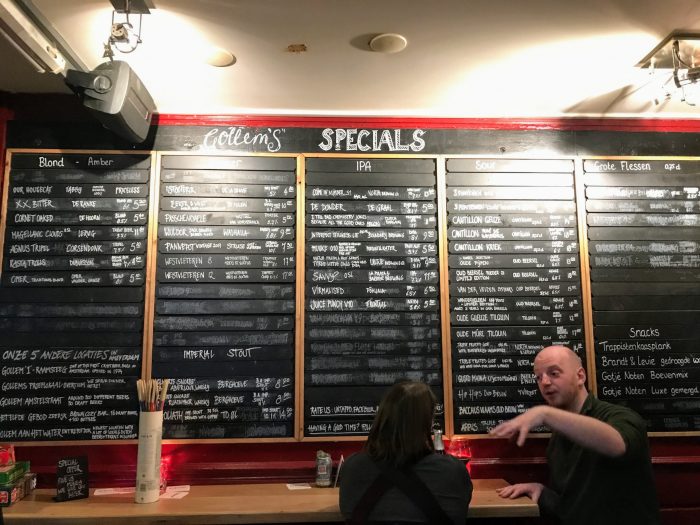 
The best breweries in Amsterdam

There are a few Brouwerij Troost bars in Amsterdam, but the original location opened in a former monastery in De Pijp in 2013.

The bar has 10 taps of Troost beer along with a fantastic bar snack & food menu. Look at this feast! 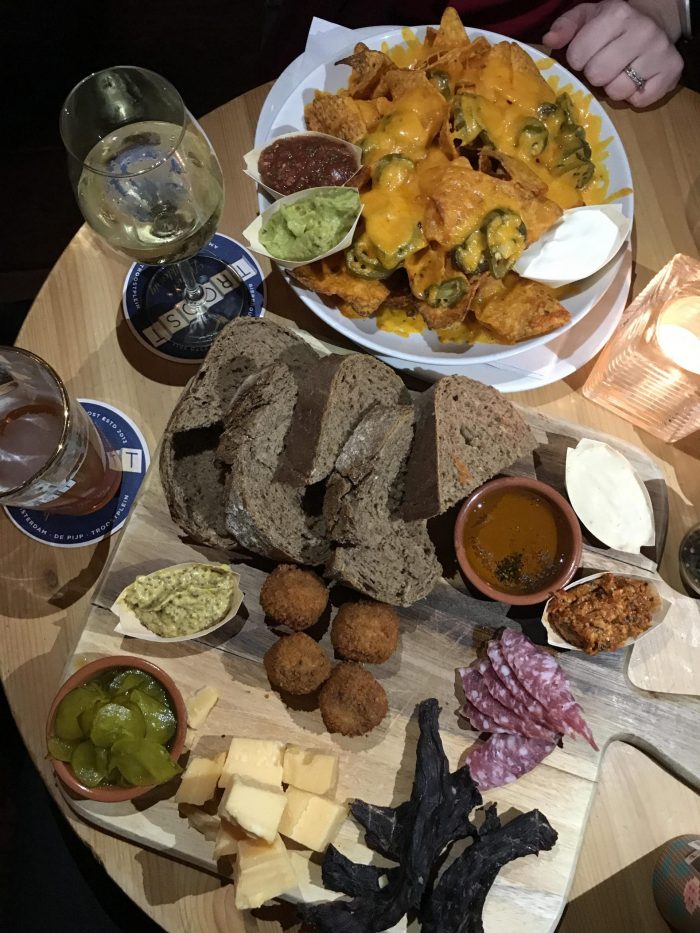 Is there a more stereotypical Dutch beer drinking experience than having a pint in a bar right next to a windmill? That’s the setting for Brouwerij ‘t IJ, which has a brewery & tap room that opened in a former Amsterdam bathhouse in 1985, right next to the largest wooden windmill in the Netherlands. 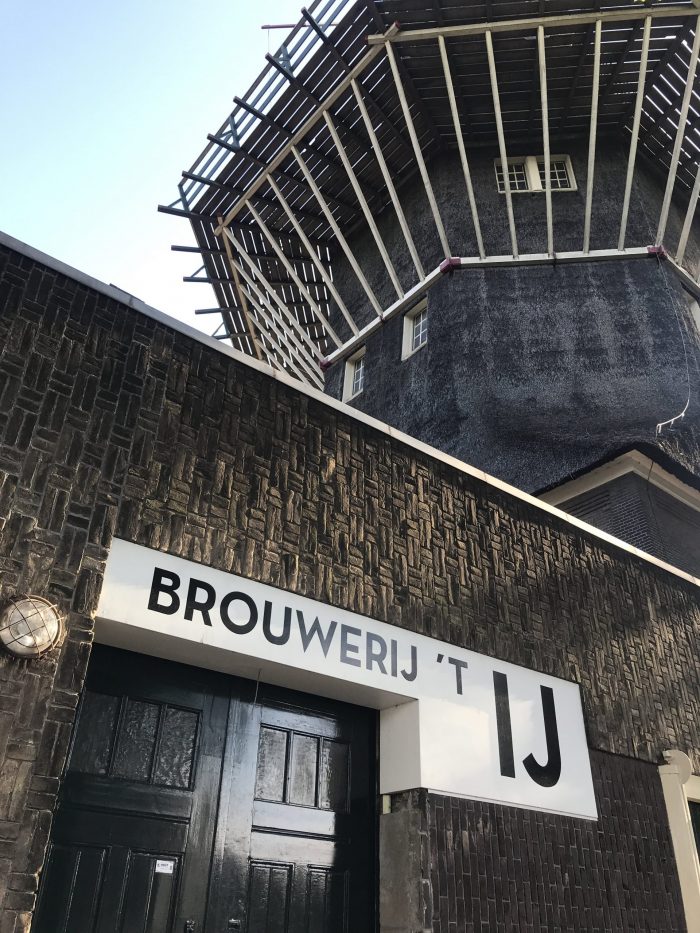 The IJ tap room is not open very late, but it’s a cool place for a drink. They also have a bar in the center of Vondelpark that has a fantastic outdoor patio.

Butcher’s Tears is a nanobrewery located down an industrial road southwest of Vondelpark. It very much feels like a garage brewery, serving as a neighborhood hub with their 8 taps plus cans & bottles. They have also opened a tap room in Amsterdam-West.

Brouwerij De Prael is the close to Amsterdam Centraal station. They have 12 taps of their own beer, which are constantly rotating through new creations. There is also a carnivore-friendly food menu. They have a few other locations around the Netherlands, including one at their main brewery in Houthavens. 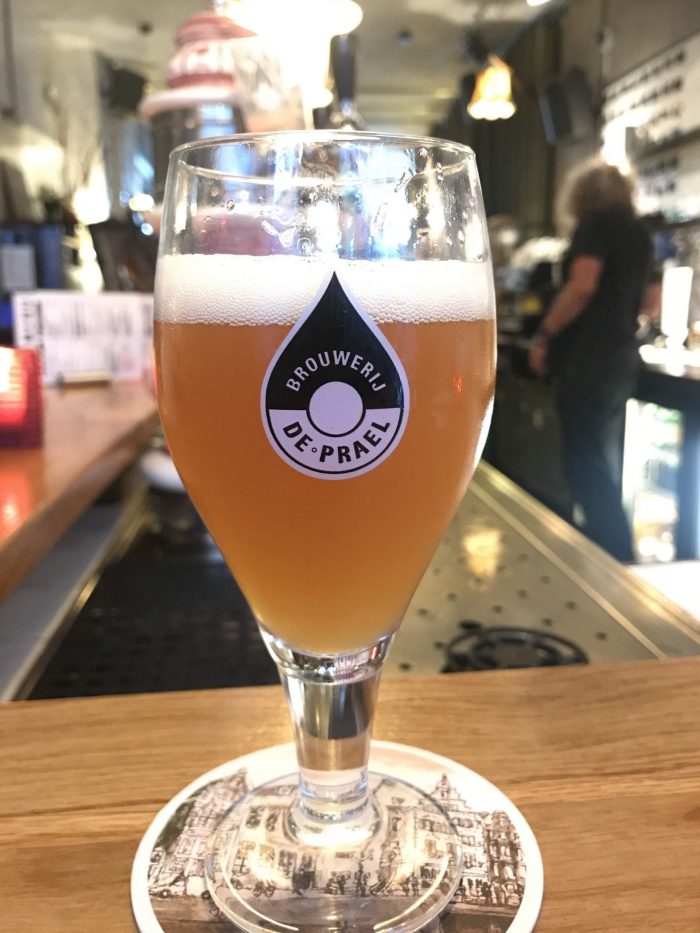 There are a couple of great craft breweries in Amsterdam-Noord, across the IJ from the center of the city. The breweries are easily accessed by the free ferries that frequently run across the water.

Oedipus Brewing has a large space complete with a nice patio. They’ve got 14 taps, plus their own bottles available. The burgers & fries are also good. 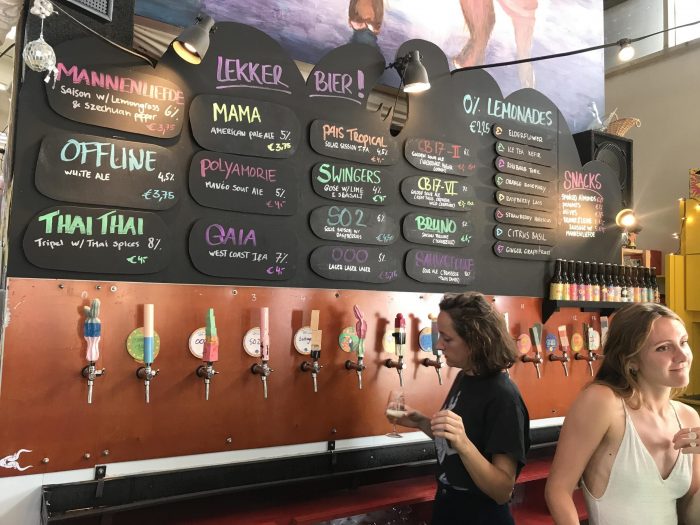 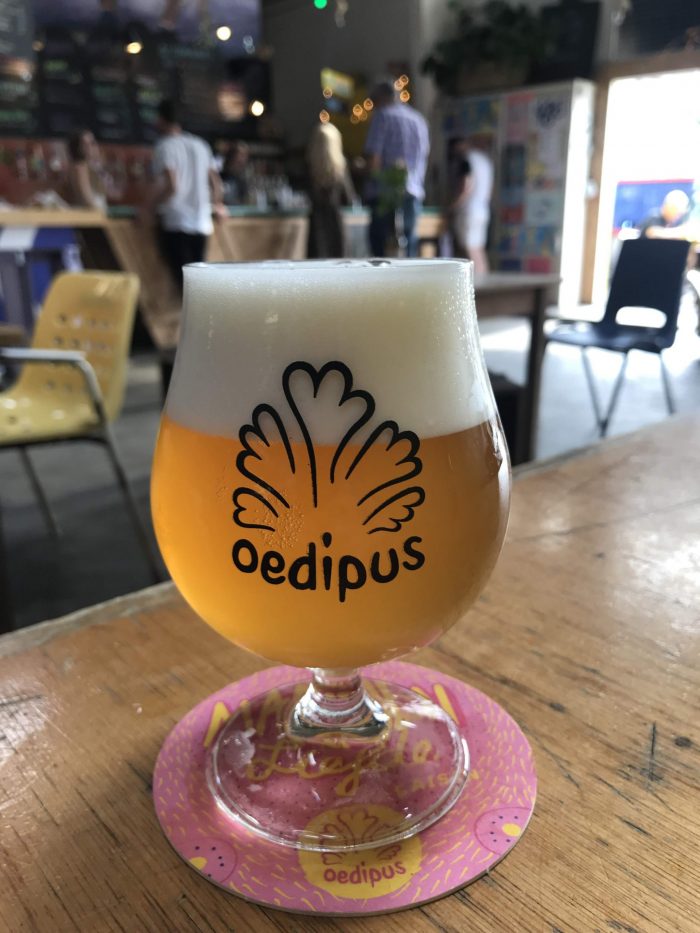 Walhalla Craft Brewery is another small brewery in Amsterdam-Noord with 13 taps, located just around the corner from Oedipus so you can make an afternoon out of it. 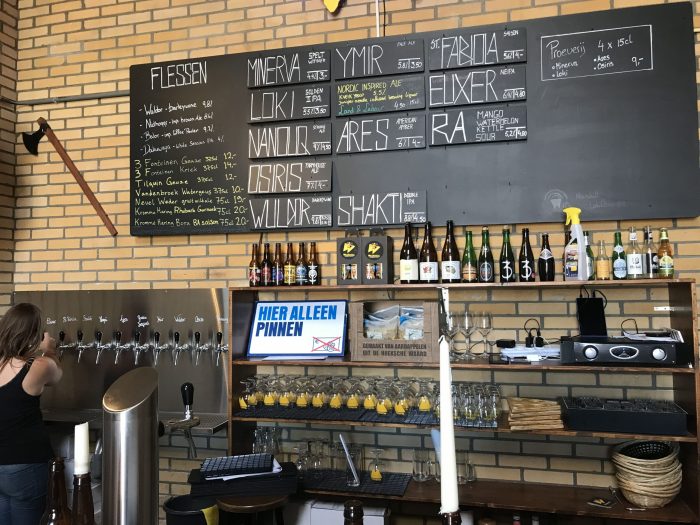 The best bottle shops in Amsterdam

De Bierkoning has been open for over 30 years, offering one the largest selections of bottles in Amsterdam (they claim to have over 2000 bottles!). In addition to being a great bottle shop, they also have plenty of glassware for sale. This is the place to go if you want some beer to take home or if you’re staying in a place with a fridge. 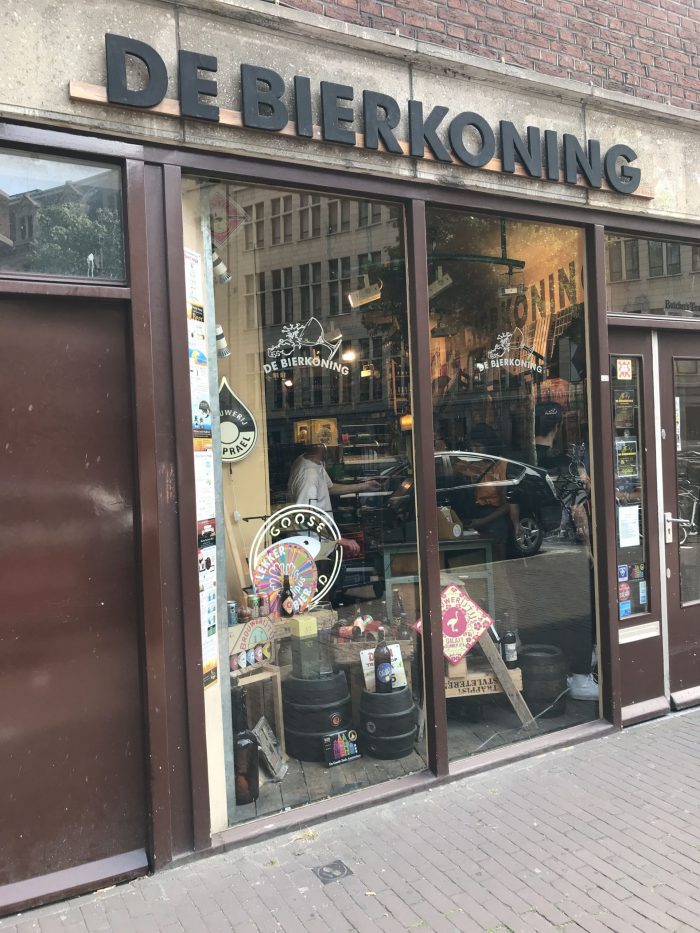 As you can see, there are plenty of great bars & breweries to visit in Amsterdam, whatever you’re in the mood for.

If you’ve spotted any other great Amsterdam beer places, let me know in the comments!

Here are some great Amsterdam tours & other things to see & do in the city.

If you’re looking for a place to crash after drinking beer in Amsterdam, check out these Amsterdam hotels & AirBnbs. 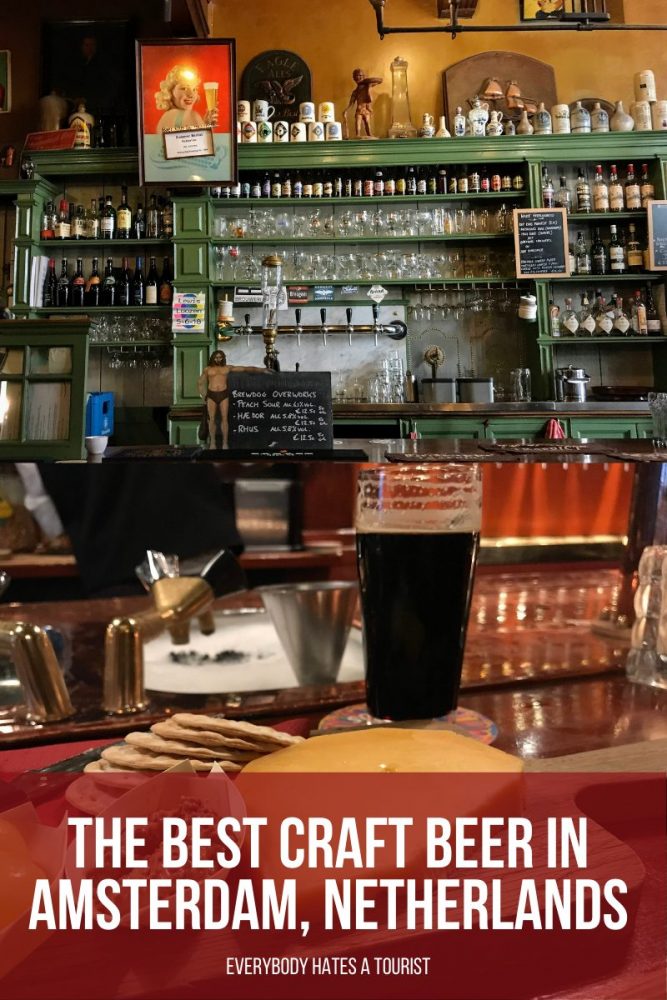