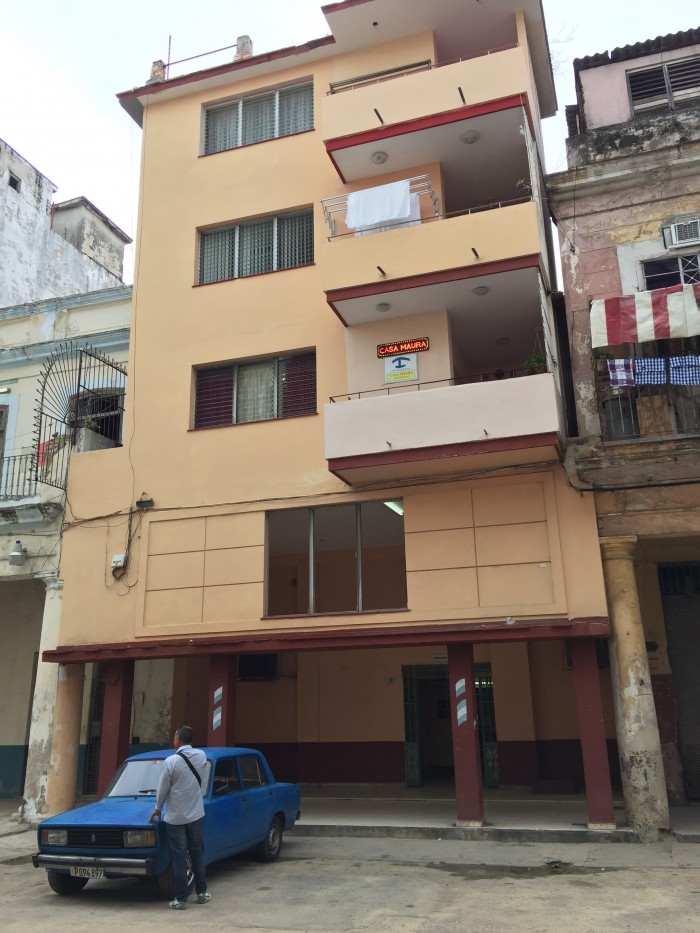 Long before AirBnb, the Cuban government allowed private citizens to open their houses for tourists. Such an arrangement is called a casa particular. In a country where there are strict government controls over commerce, the creation of casas particulares has helped citizens start their own small businesses, while giving travelers access to a unique Cuban experience for a low price.

With the easing of restrictions between the United States & Cuba, AirBnb has been allowed to list Cuban casas particulares on their website. You can find casas listed elsewhere as well. I chose to go through AirBnb because I wanted to be able to pay for it beforehand, which would mean having to carry less cash with me when I traveled. Residents of the United States currently can’t use credit cards or access their currency while in Cuba, so you have to be prepared with everything you’ll need when you arrive. I recommend bringing more money than you’d think you will spend, as unexpected costs always pop up, and getting caught short is not an option.

When I traveled to Cuba, I stayed at a casa particular in Havana Vieja called Casa Maura. Casa Maura is one of the highest rated bed & breakfasts in Havana, and my experience was fantastic. I used Tripadvisor for research, then booked through AirBnb. You can use my referral link and get $20 off of your first stay. I will receive $20 as well, so if you sign up, thank you!

Prior to my arrival, Maura sent me basic information via e-mail, while also setting me up with a taxi driver upon my arrival in Havana. Unfortunately, there were huge delays at the airport, including the baggage carousels breaking, so I didn’t make it outside until a couple of hours later than I had expected. By this time, I didn’t see a taxi driver with my name anywhere. I ended up taking another taxi, a Soviet-era Lada that would give deathtraps a bad name. I made it to Casa Marua unscathed, and headed in. 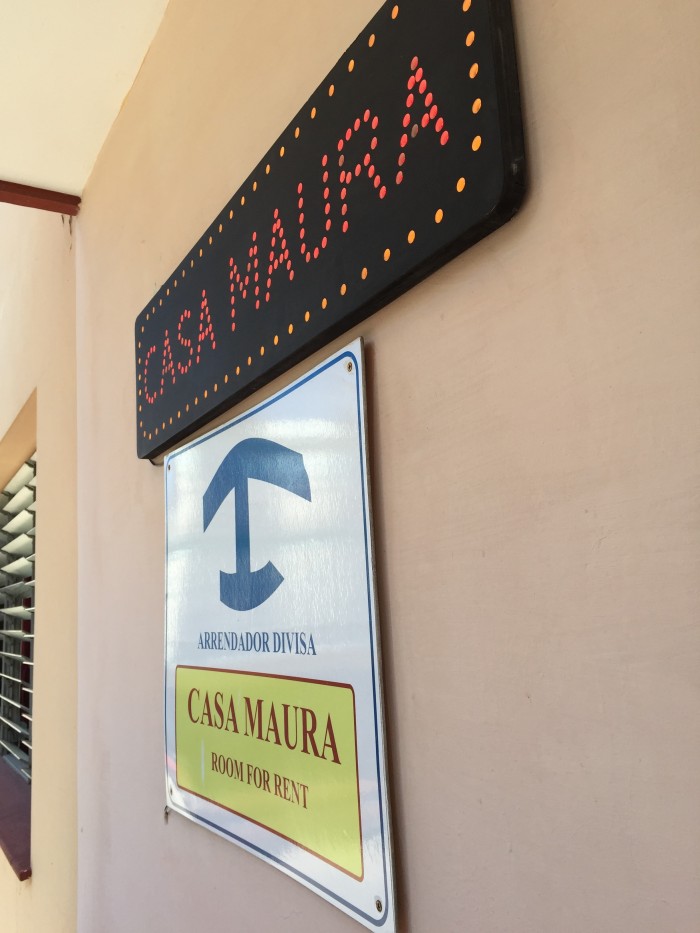 Maura’s son let me into the building, and we ascended to their apartment in a rickety elevator with an old-school manual gate. On multiple occasions during my stay, I would have to walk up or down a couple of flights of stairs due to someone else in the building not closing the gate all the way after exiting, rendering the elevator unusable until it was shut again. 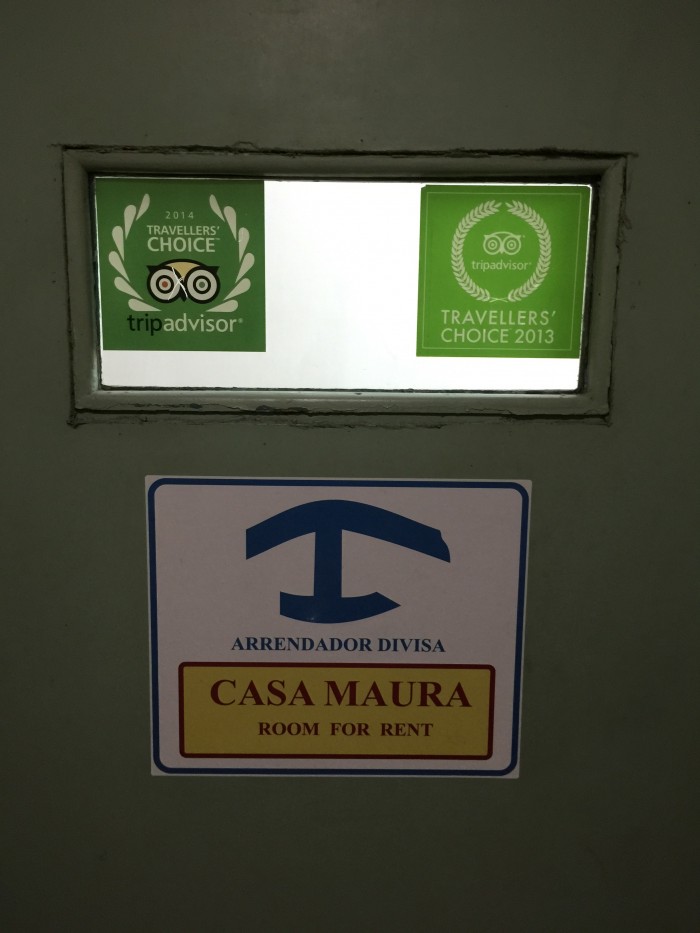 If you’re looking for a place to stay in Cuba, look for the logo above. If that place doesn’t have any room available, they can help send you to someone who does. I chose to book beforehand because I was only going to be in one place for my trip, but you can certainly travel in last minute manner as well, if that’s your style.

Casa Maura is a family operation, so I chatted with Maura’s son for a few minutes until his mother arrived from their apartment next door. She showed me to my room, and asked me if I needed any recommendations for dinner. I told her I was planning on heading to Habana 61. She said it was one of her favorite places, & she had gone there with her daughter for her birthday.

My room had a nice sized bed, plus an in-window air conditioning unit and a strong fan. The combination kept the room comfortable despite the 95 degree heat and humidity outside. In fact, I even found myself having to turn them down in the middle of the night because they kept the room so cold. 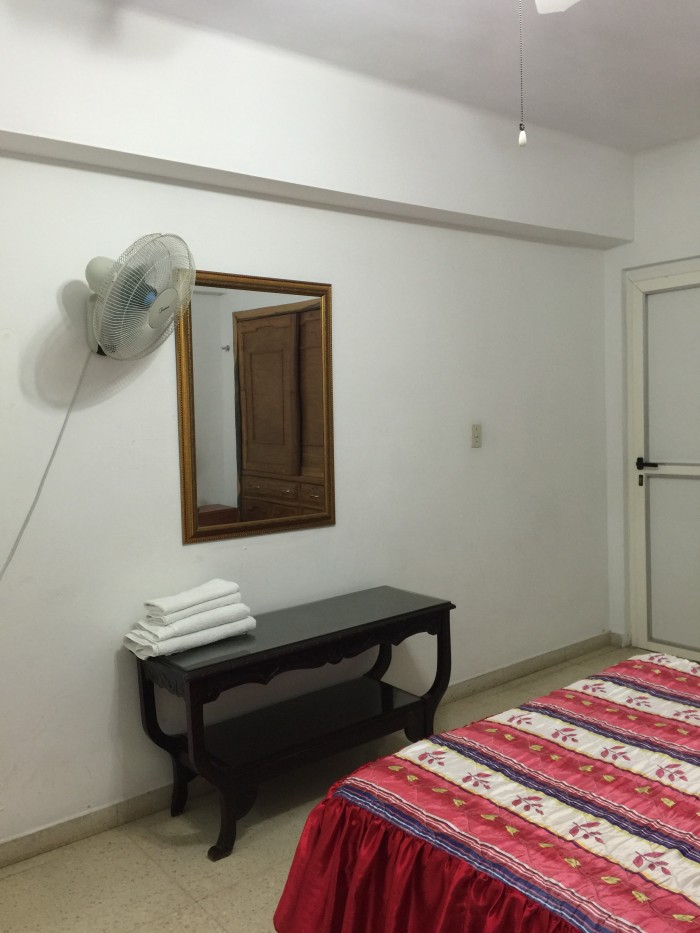 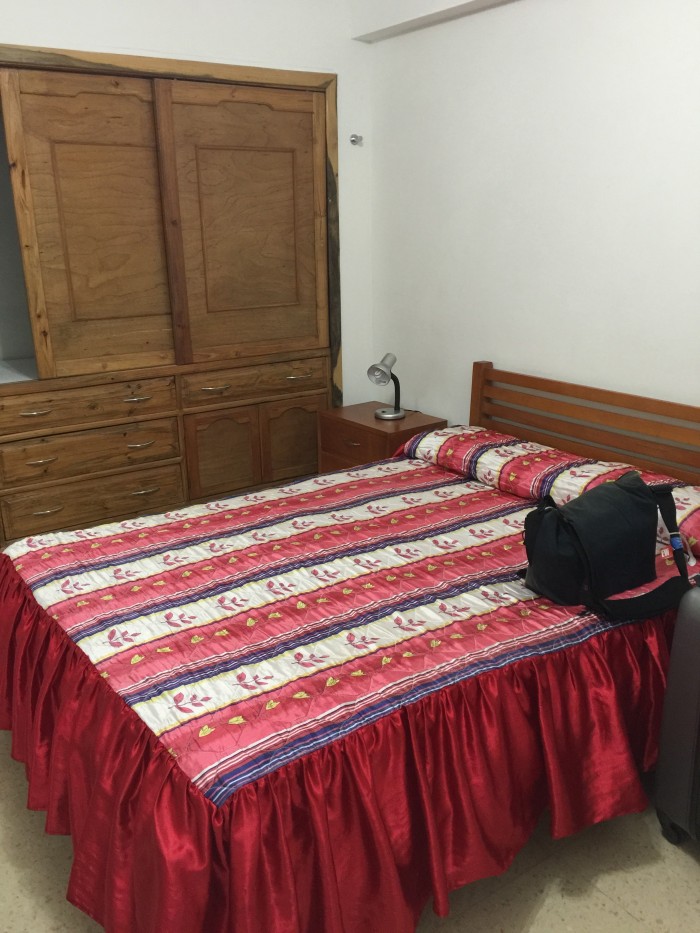 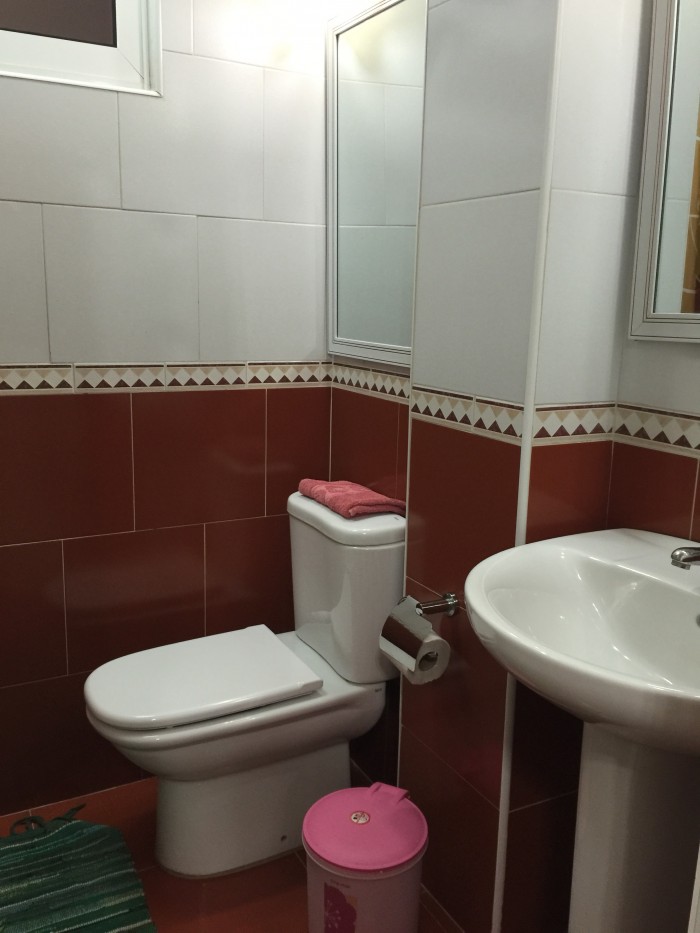 Whatever I needed, Maura had it. She has a refrigerator with cold water and beer for sale. I purchased a large water bottle each morning to take with me on my wanderings. If you want to know anything about Havana, Maura & her family can set you on your way. Maura also has connections to other casas in Cuba, so she can help you with bookings beyond Havana. She also warned me about the jinteros in Havana, the scammers who will try to steer you to particular bars and restaurants, which was nice to know as a reminder, even if I already had some idea.

In the mornings, I woke up to a full breakfast spread. It’s optional, but I don’t know why you wouldn’t want it. For only about $4 each day I got: eggs with ham and cheese, a pastry, fresh fruit, amazing fruit juice (sometimes mango, sometimes pineapple, always delicious), avocado, bread, and coconut jam. You will set off on your day feeling stuffed. 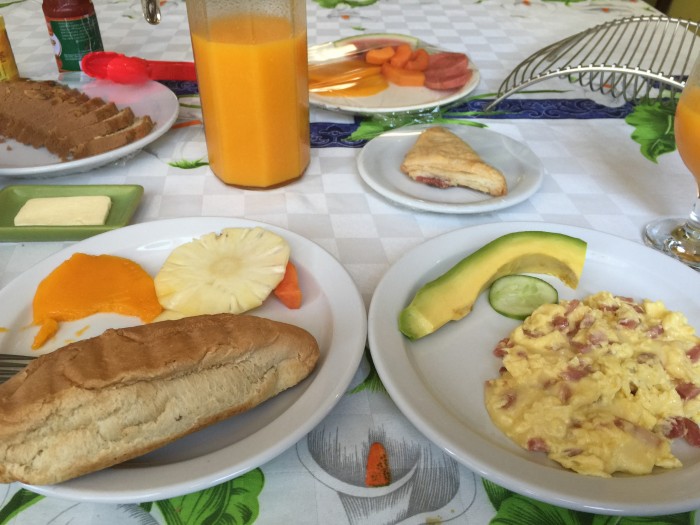 On my final evening, Maura made mojitos for all of her guests as well as some snacks. It was a nice touch, and we all had a great evening drinking and chatting while we sat out on the balcony.

As far as location, I can’t imagine that you can do much better than Casa Maura. The apartment is located a block away from El Museo de la Revolucion, with other sights in Havana Vieja only a few blocks further away beyond that. The street itself was quiet, and the rooms were set back from it, so it was always quiet, and I had no trouble sleeping. 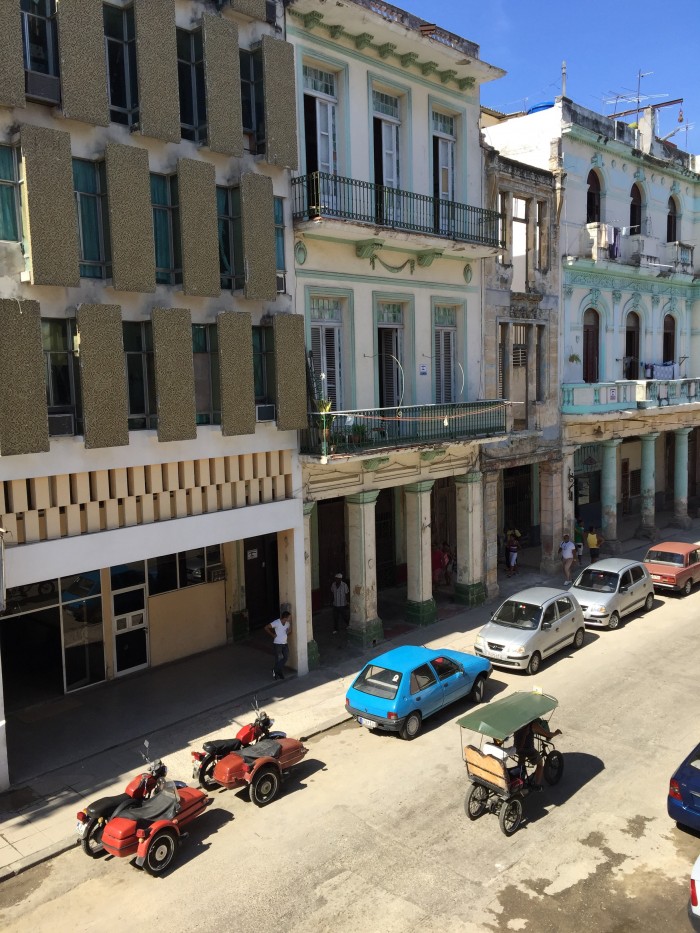 If you’re expecting a five-star luxury experience in a casa particular, you’re in the wrong place. However, what you will find is incredible value. For $20-35 per night depending on where you’re staying, you get a comfortable place to stay with a local family, plus a nice breakfast. It’s a home away from home while you travel. Maura became my 2nd mom for a few days. While you could stay in a hotel, the nicest hotels in Cuba are so expensive that you could stay in a casa particular for a week or two rather than in a hotel for just one night. Given the friendliness of the Cuban people, why not get a closer sense of the local culture and make some new friends by staying in a casa particular?