One of the most iconic views in Killarney, Ireland is Ross Castle, a 15th century castle on the edge of Lough Leane, the largest of Killarney’s lakes. The castle is easily accessed from the Killarney town centre, and the surrounding Ross Island is a lovely place for a walk. Ross Castle & Ross Island can be visited in just a few hours, making it the perfect afternoon activity & sunset-watching location. 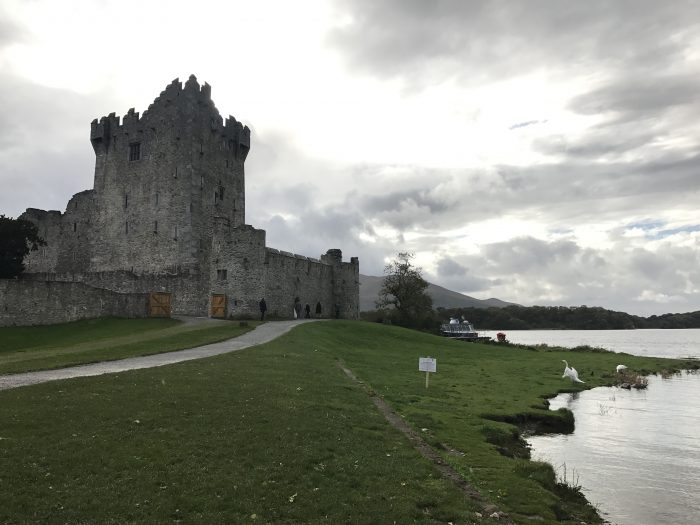 Getting to Ross Castle from Killarney

Ross Castle is about 3 kilometers from the center of Killarney, which is about a 35 minute walk.

Another way to get to Ross Castle from Killarney is by jaunting car. These horse carts are everywhere in Killarney, and they are a popular way of touring the area. 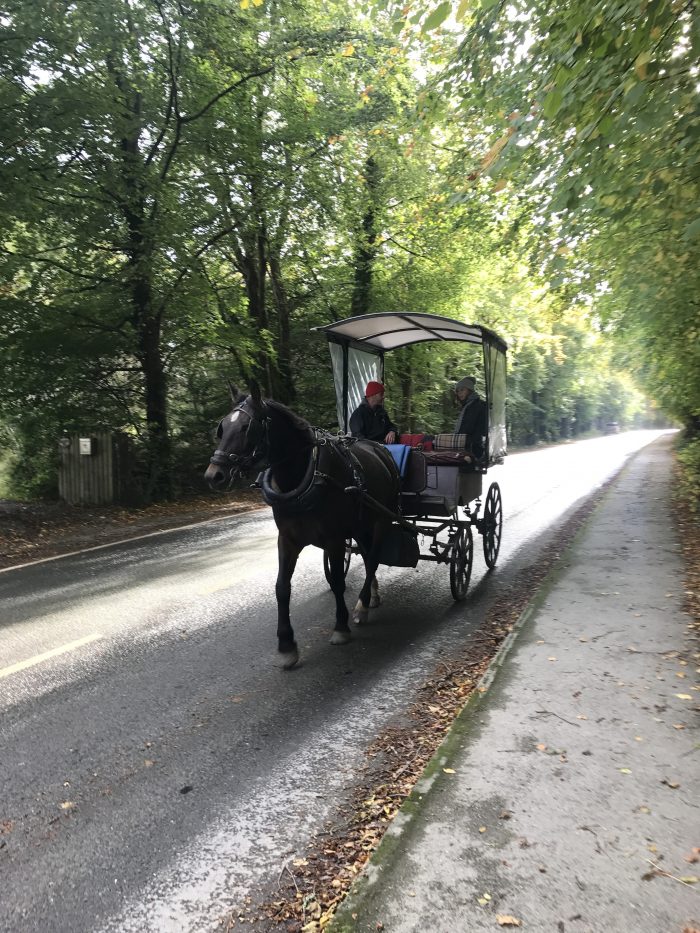 Ross Castle was built in the 15th century by the O’Donoghues Mór (Ross) clan. Legend has it that O’Donoghue either fell or leapt from a castle window into Lough Leane, along with his horse. As the story is told, both now keep a watch on the castle & the lake from a palace at the bottom of the water, rising every seven years on the 1st of May. If you catch a glimpse of him on that day, you are supposed to have good luck. Presumably better luck than a guy who fell out of a window & got stuck at the bottom of a cold Irish lake. 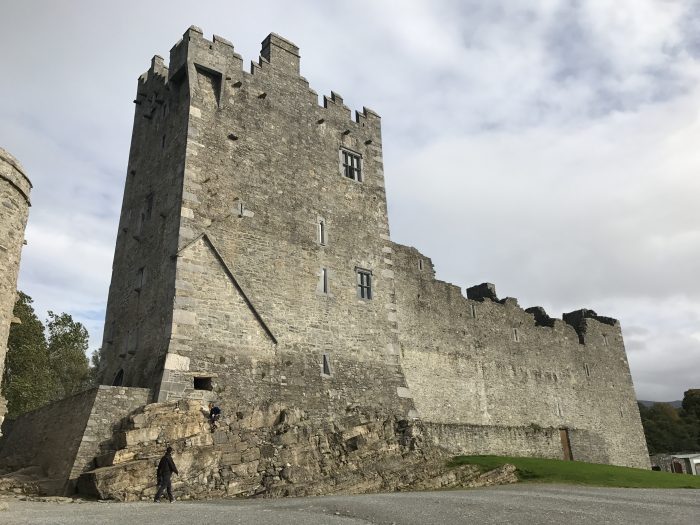 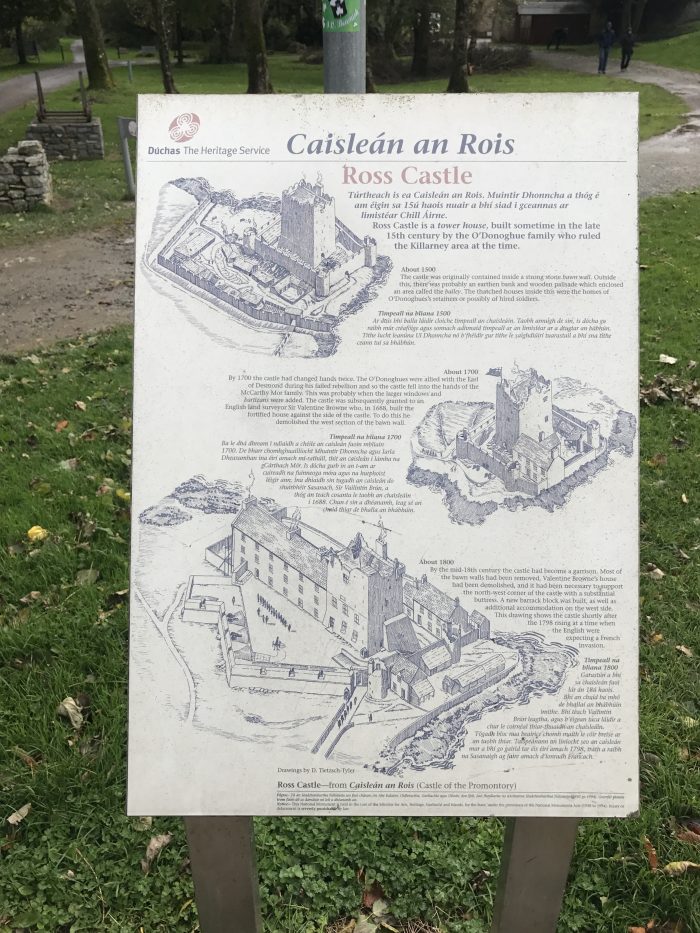 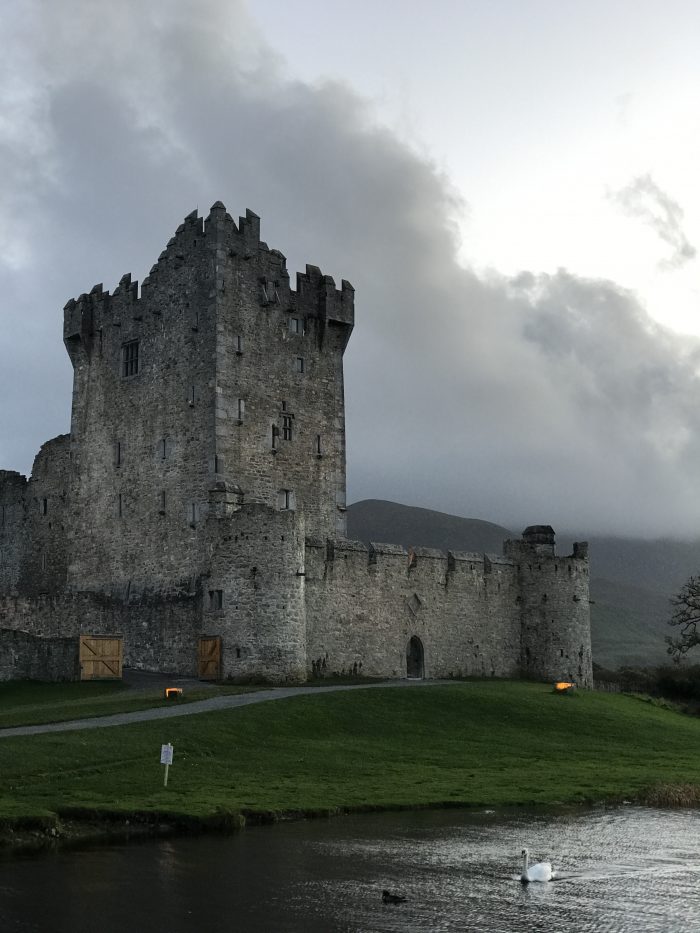 After the O’Donoghues, Ross Castle passed on to the MacCarthy clan & the Brownes. In 1652, it was one of the last places in Ireland to fall to Oliver Cromwell’s army during the Irish Confederate Wars. An Irish prophecy foretold that Ross Castle could never be taken by land, only by water. General Edmund Ludlow knew of this prophecy and thus attacked Ross Castle by ship. It quickly fell. If O’Donoghue & his horse were keeping an eye out for an invasion, they did a terrible job.

If you want to re-enact this invasion, you can pretend to do so when you arrive back at Ross Castle on a boat cruise from the Gap of Dunloe. 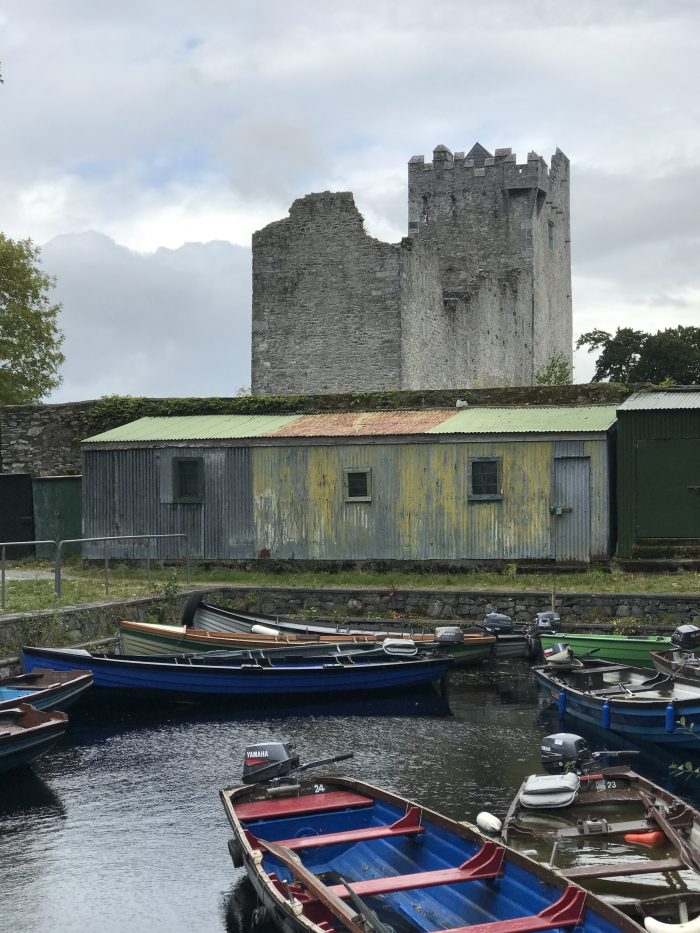 Nowadays, Ross Castle is part of Killarney National Park. The inside of the castle can only be accessed via guided tour during the summer months. Parts of the building have been refurbished, including the Great Hall & bed chambers. There is also a collection of historic furniture. Even if you are unable to tour the inner keep, the castle grounds are still open year-round. 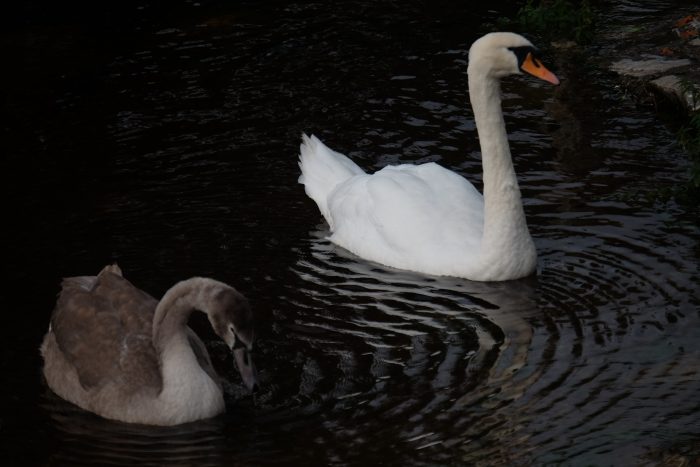 After visiting Ross Castle, there’s also the rest of the island to explore. None of the Ross Island walking paths are too long or too strenuous. It’s easy to walk all of them in a couple of hours. Each provides a different view across Lough Leane. 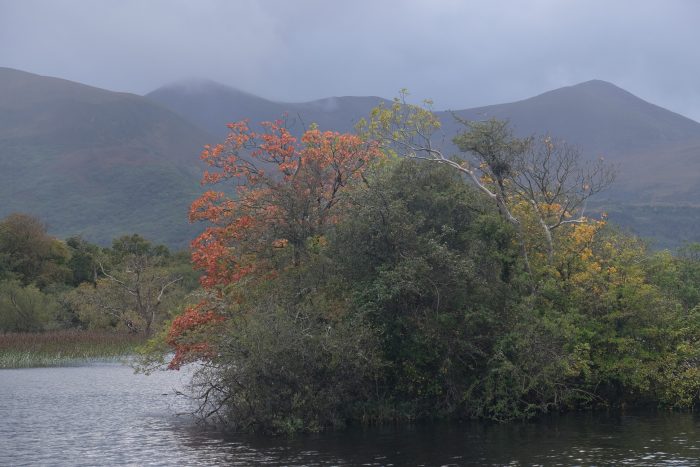 The Ross Island hiking paths are all well-marked, and the more popular sections are paved. From Ross Castle, heading down the path to the right takes you towards Library Point & Governor’s Rock. Library Point is the longest path. It eventually leads to views of Innisfallen Island & to the north. 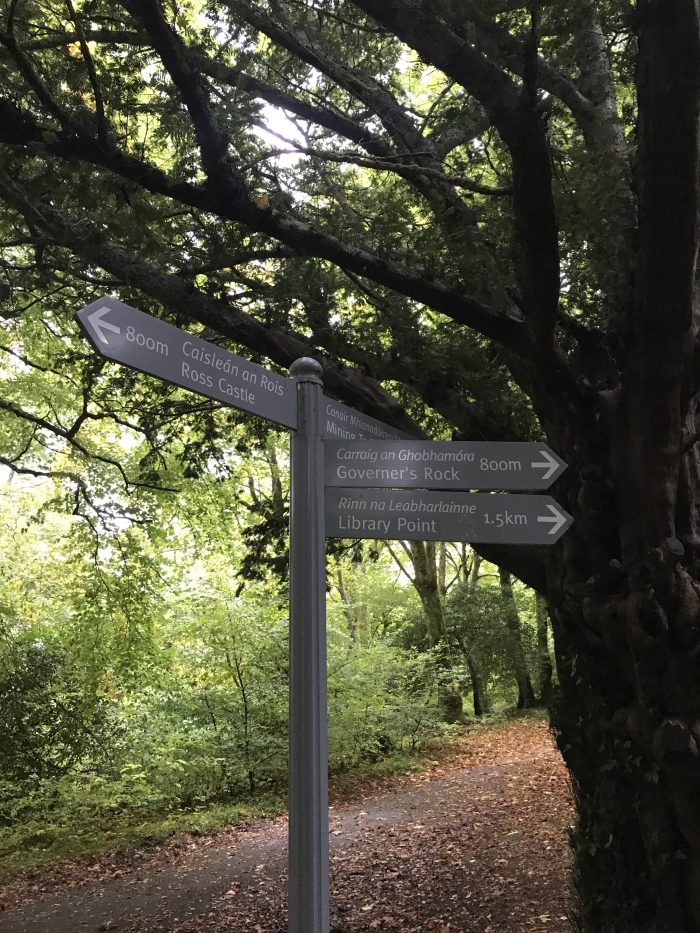 Ross Island is filled with luscious greenery. It was raining a bit, as is typically the case in the West of Ireland. Past the turnoff for Governor’s Rock, the paved path turned a bit muddy as it passed through a marshy area. 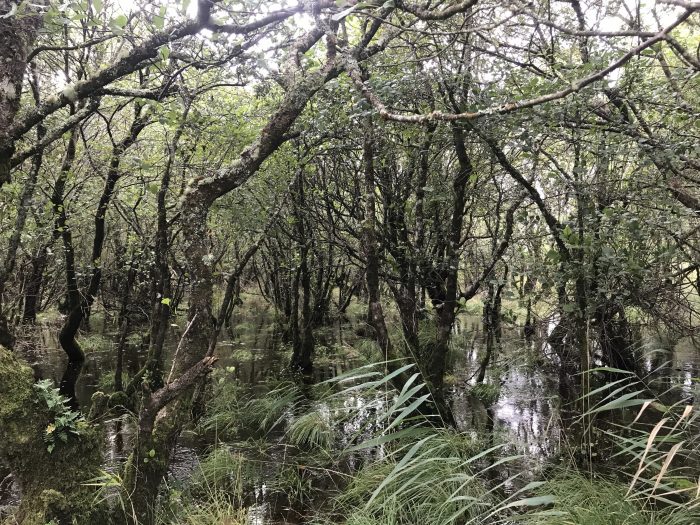 A bit beyond here, the marsh had completely flooded the trail, so there was no way forward. 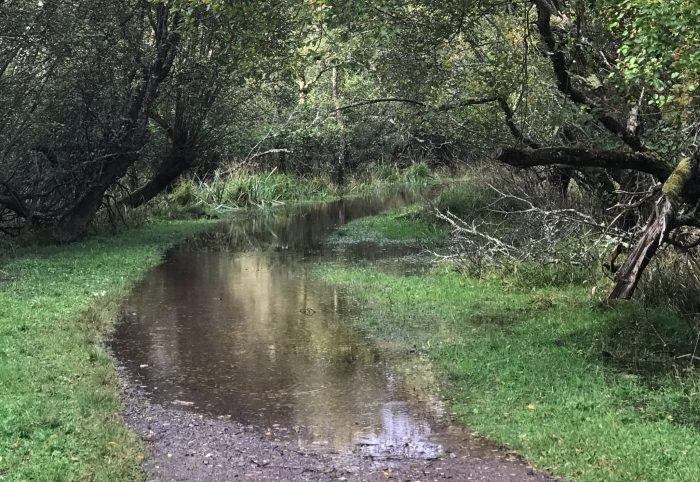 I had to turn back. Unfortunately, there had been no signs mentioning the closure (or the necessity to carry your own canoe). I backtracked & headed to Governor’s Rock instead.

Trees covered most of the hike to Governor’s Rock. Thanks to all of the growth there aren’t many views, but the forest itself is pleasant. 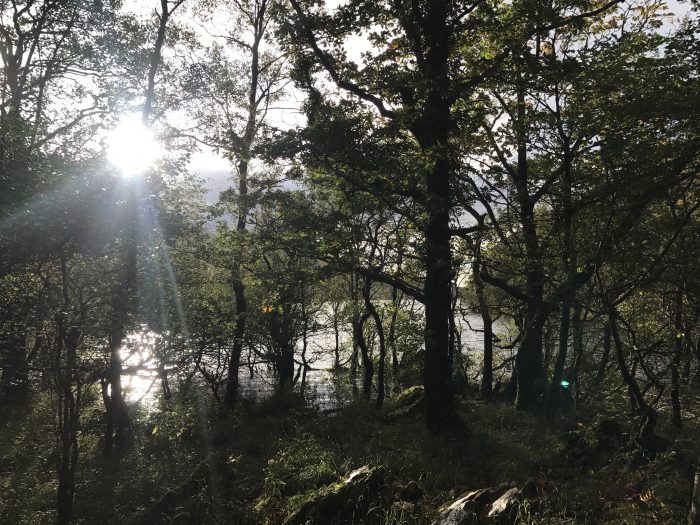 However, at the very end of the trail, there’s a view that makes it all worth it. The path leads up the rock itself, and the trees give way to panoramic views across Lough Leane. 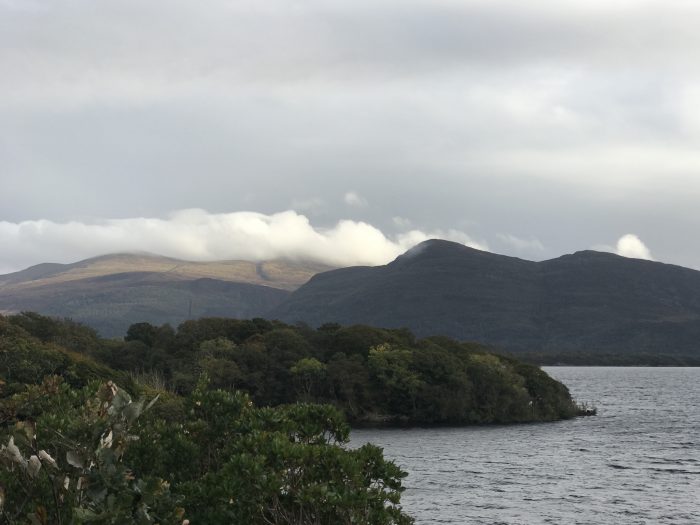 To the west, often obscured by clouds, are the tallest mountains in Ireland. 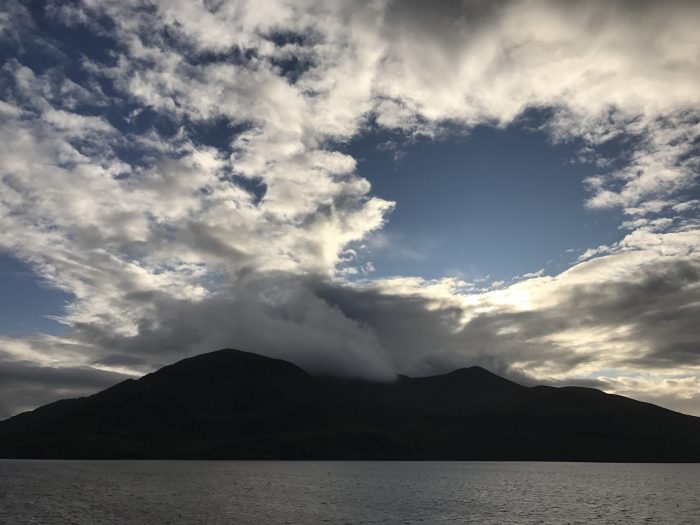 After spending a bit taking in the scenery at Governor’s Rock, I headed south to complete the rest of the loop walk. This section is called the Mining Trail, passing by the Old Ross Island Copper Mine.

The trail comes and goes from the shoreline, with occasional views across small bays. 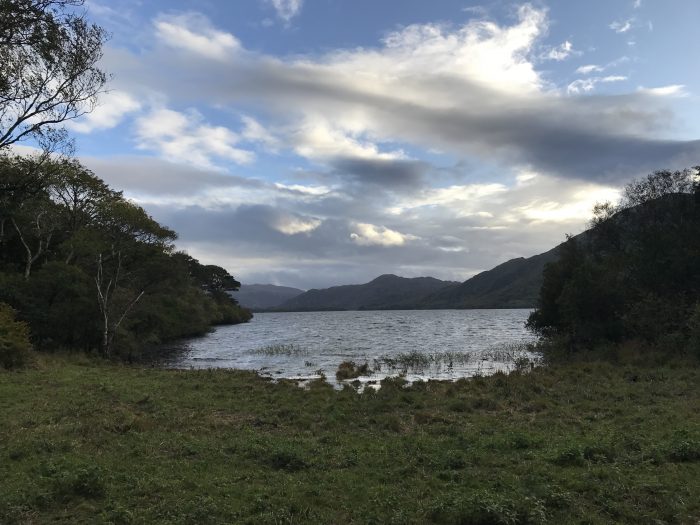 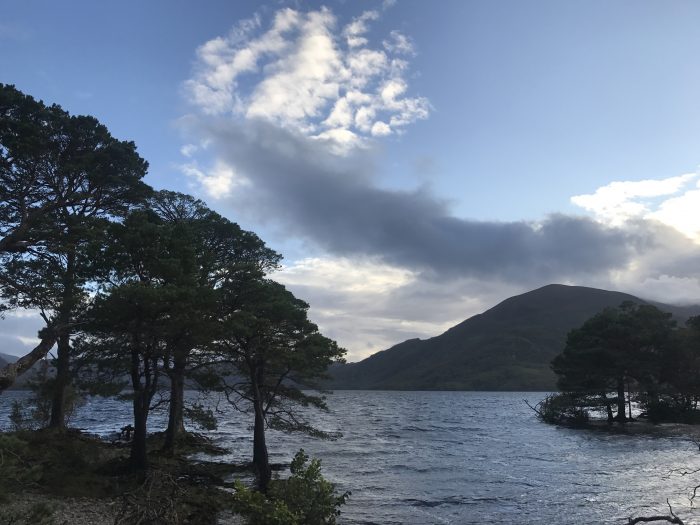 Near the copper mines, there are signs warning that there are still unprotected mine shafts in the area, so be careful. Copper & other minerals were mined on the island for thousands of years, but it wasn’t until the 1800s that a larger scale operation was attempted. The mine operated for about 25 years, but it eventually succumbed to flooding. Given my experience on the hiking trail, this is not surprising. 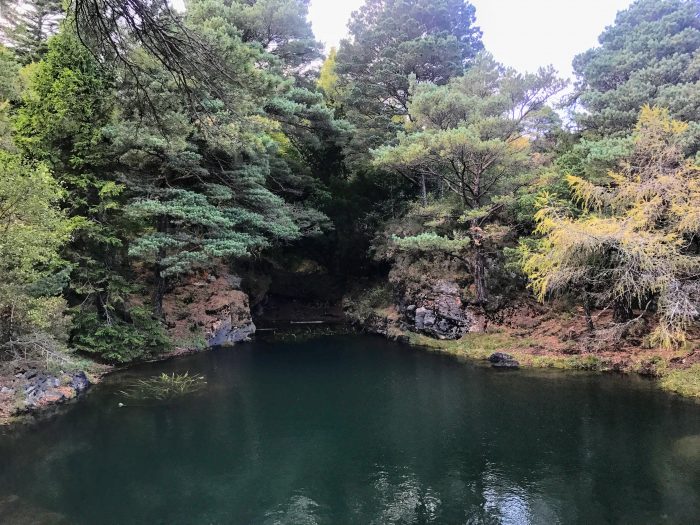 There are information signs providing more details about the history of Ross Island & the mines. 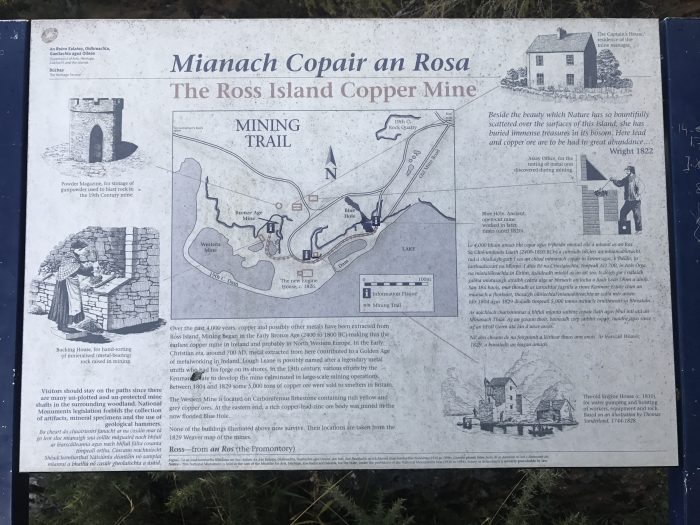 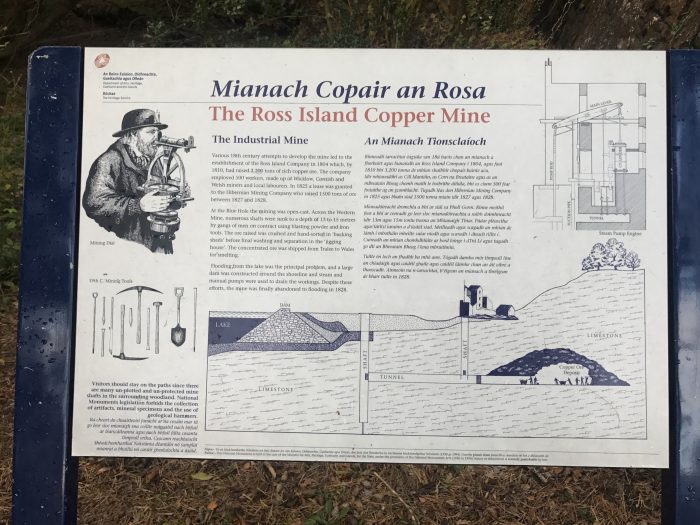 Along this section of the shoreline, you’ll also find more beautiful views across the water to the south. 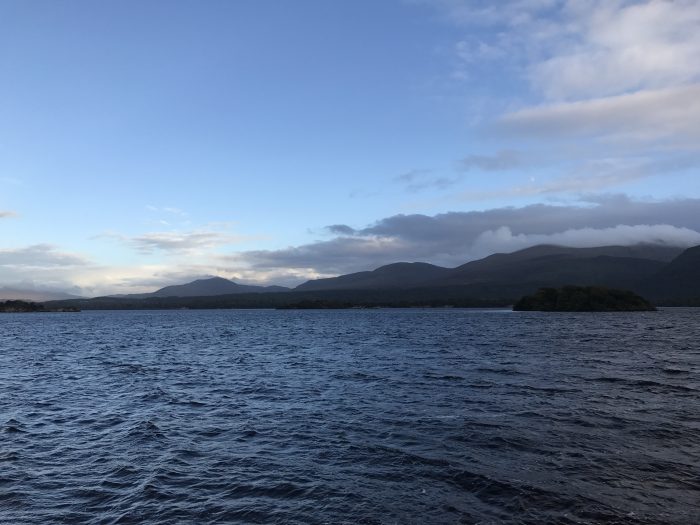 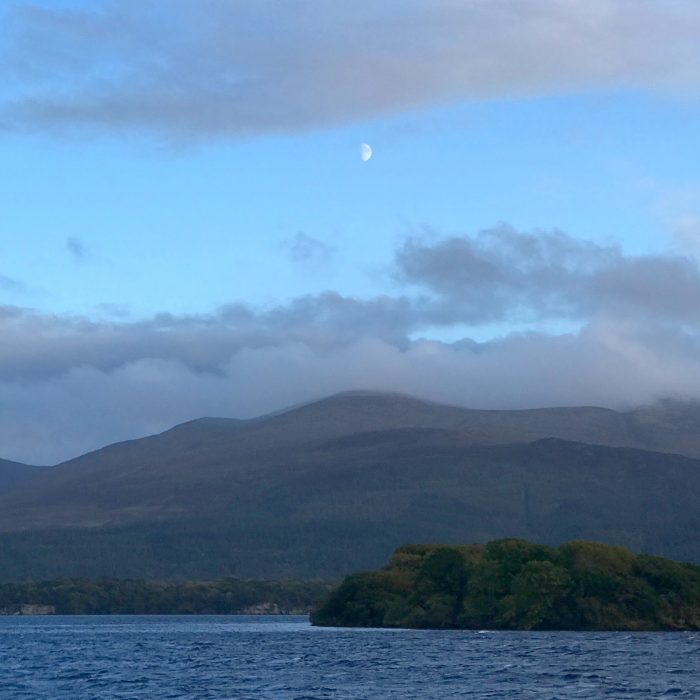 I got back to Ross Castle just in time for the sun to begin to set. Golden autumn light bathed the walls of the castle. 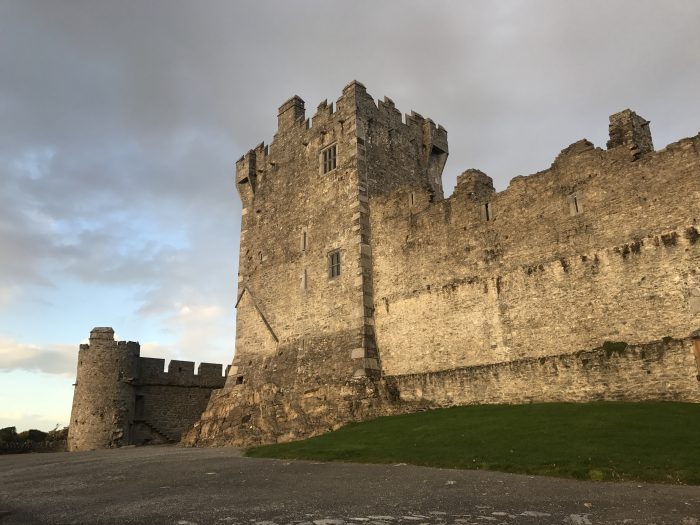 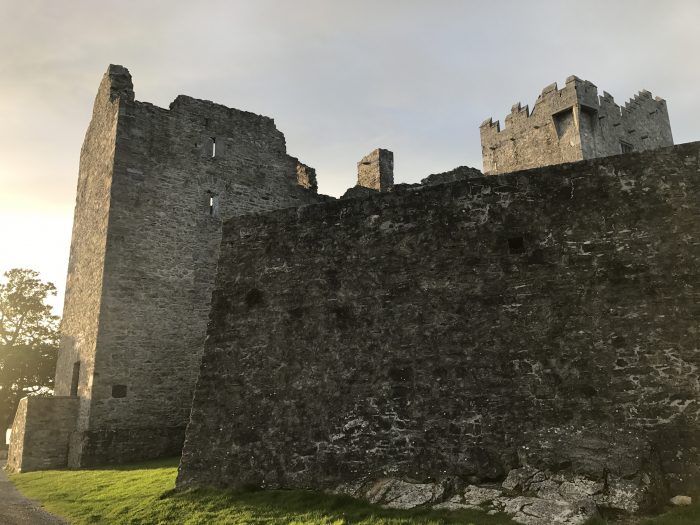 I took a spot on the nearby bridge & watched the sunset over Ross Castle & Lough Leane. 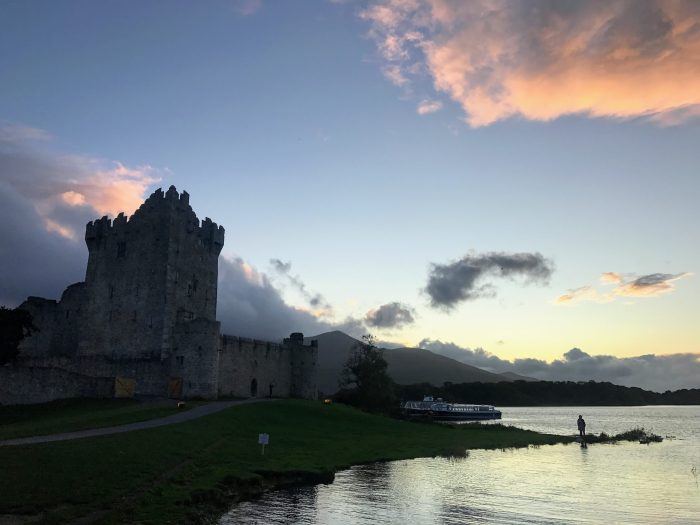 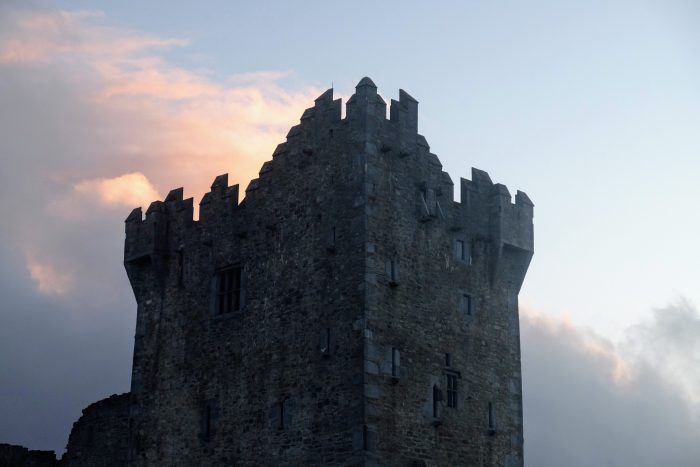 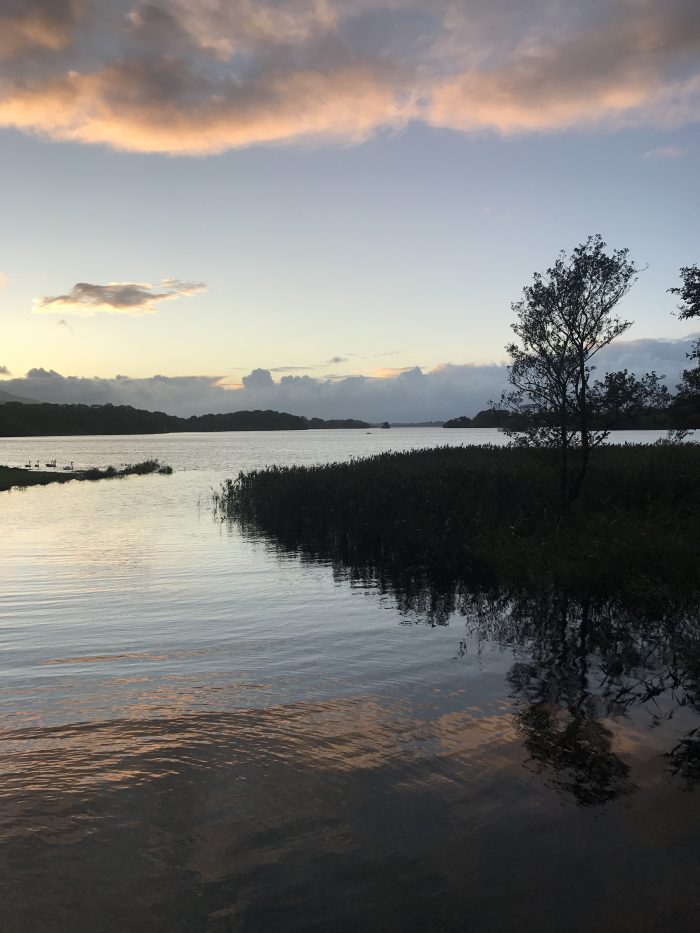 As you can see, Ross Castle is home to some of the best views in Killarney. Even if you’re not able to get a tour of the castle itself, the immediate grounds & the rest of Ross Island are nice to visit for a walk in any season.

Here are some great Killarney tours & other things to see & do in the city.

If you’re looking for a place to stay in Killarney, check out these Killarney hotels & AirBnbs.