My last day in Queenstown was a quiet one. I had some work to do, so I relaxed in my hotel until about 1pm. I wanted to get one last great view of the area, and there’s no better way to do that than from Skyline Queenstown, which sits high on a hill above the town. It’s a large entertainment complex that is accessed either by gondola or by hiking up. Despite my well-documented feelings toward heights, I opted for the gondola.

On the way up the short hill to the bottom Skyline Queenstown gondola station, I passed the Kiwi Birdlife Park. It looks like an interesting wildlife park dedicated to the endangered kiwi & other animals, but since I didn’t have a ton of time, I skipped it (the 45 NZD fee also helped me make that decision, though they do a lot of conservation work with that money). 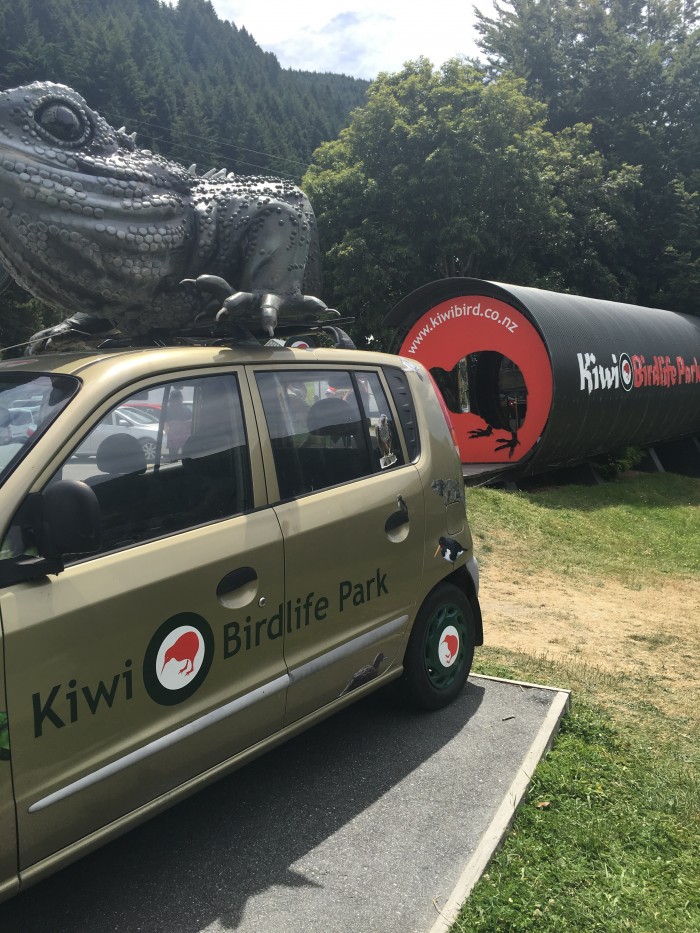 A ticket on the gondola up to the top of Skyline Queenstown is 32 NZD. It’s a little steep in both senses of the word, but you pay for the views. There are also ticket add-ons, including rides on the luge track at the top. I was intrigued by that, but it seemed like it would be more fun with people rather than solo, so I decided just to do the gondola. I bought my ticket, and since it was a fairly quiet weekday afternoon, I got a private gondola ride up to the top. 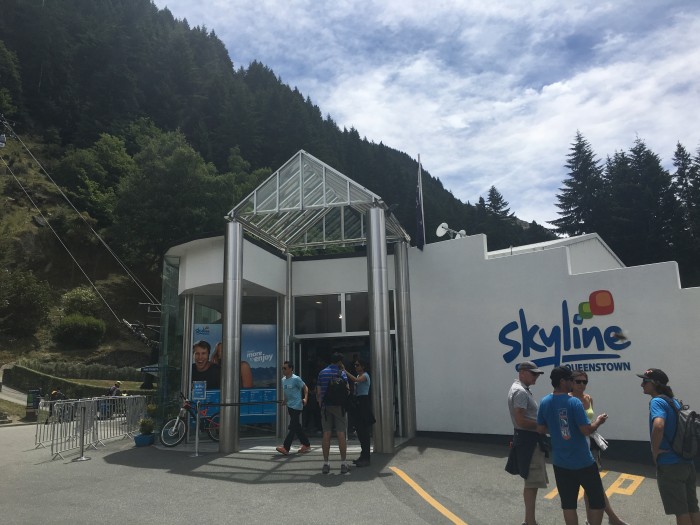 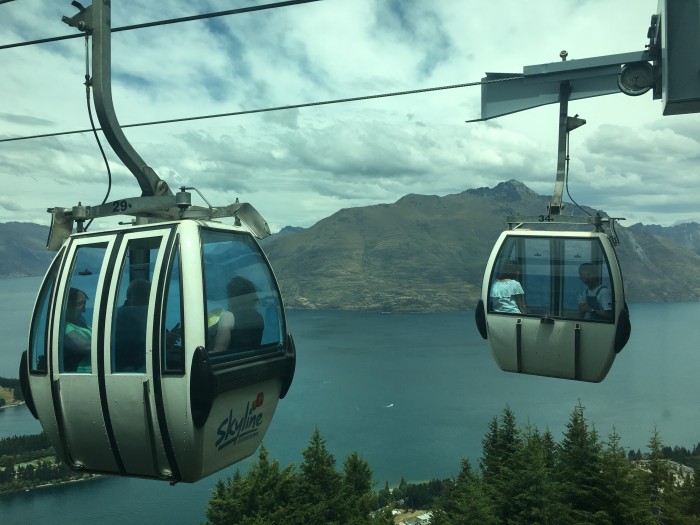 The ride takes perhaps five minutes or so. The gondola swung a bit, but not too badly. There were sheep grazing on the mountain.

Once I was at the top of Skyline Queenstown, I checked out the huge entertainment complex at the summit. There’s a restaurant with large windows looking down over Queenstown, plus a cafe and ice cream shop. 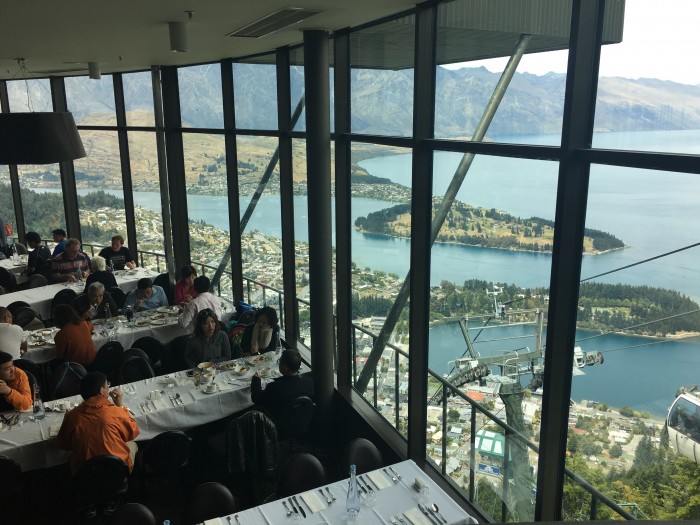 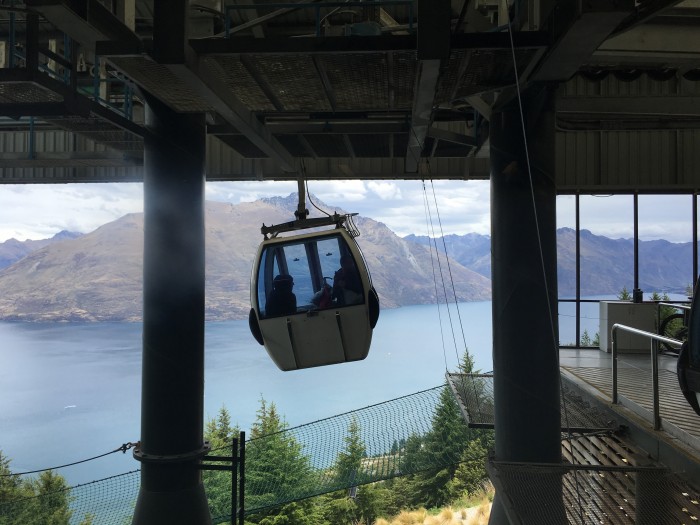 There is also an outdoor deck that rings the building, so you can get an even better view. Yes, that’s a bungee jumping platform. No, there’s no way I would ever do it. 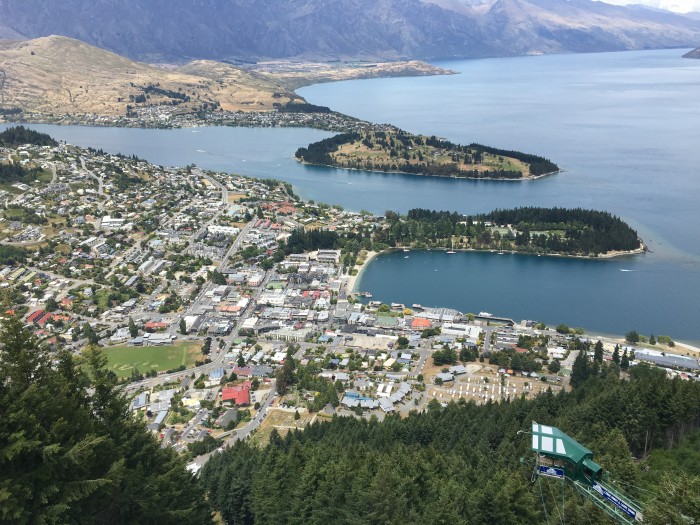 Inside, there was this jelly bean poster of Elijah Wood/Frodo Baggins. 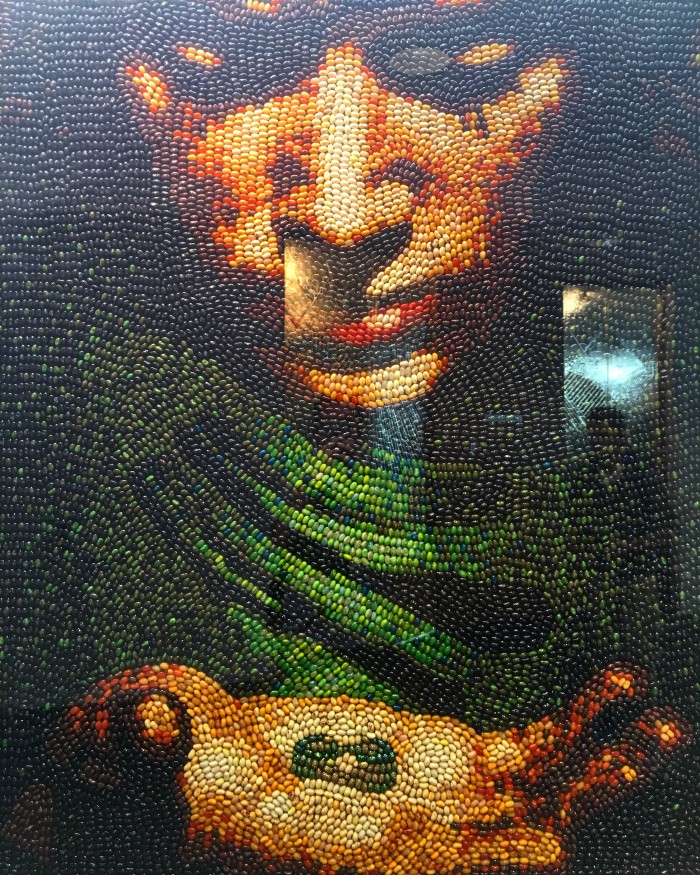 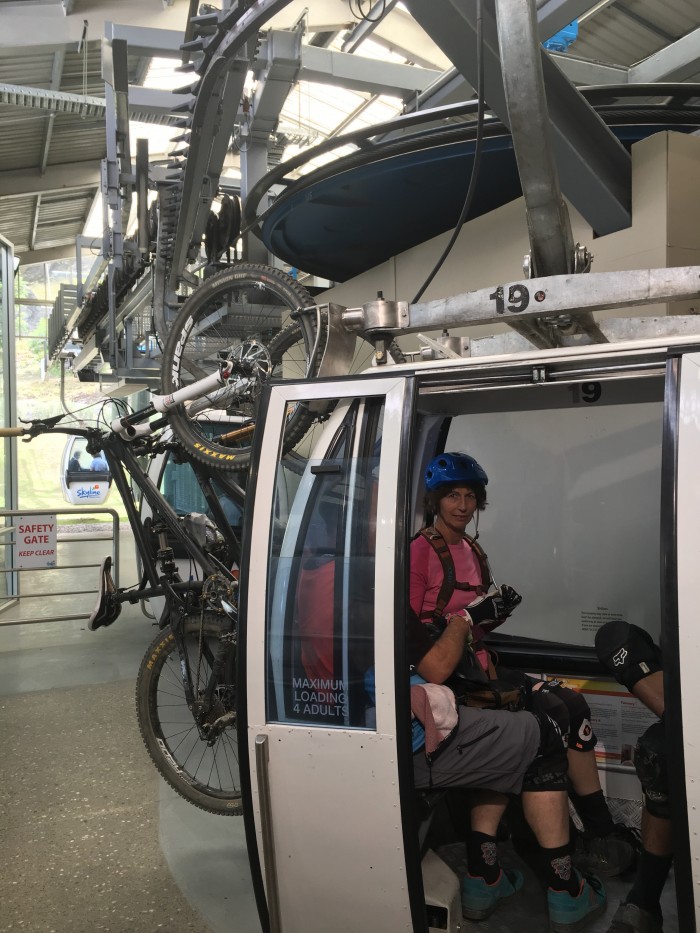 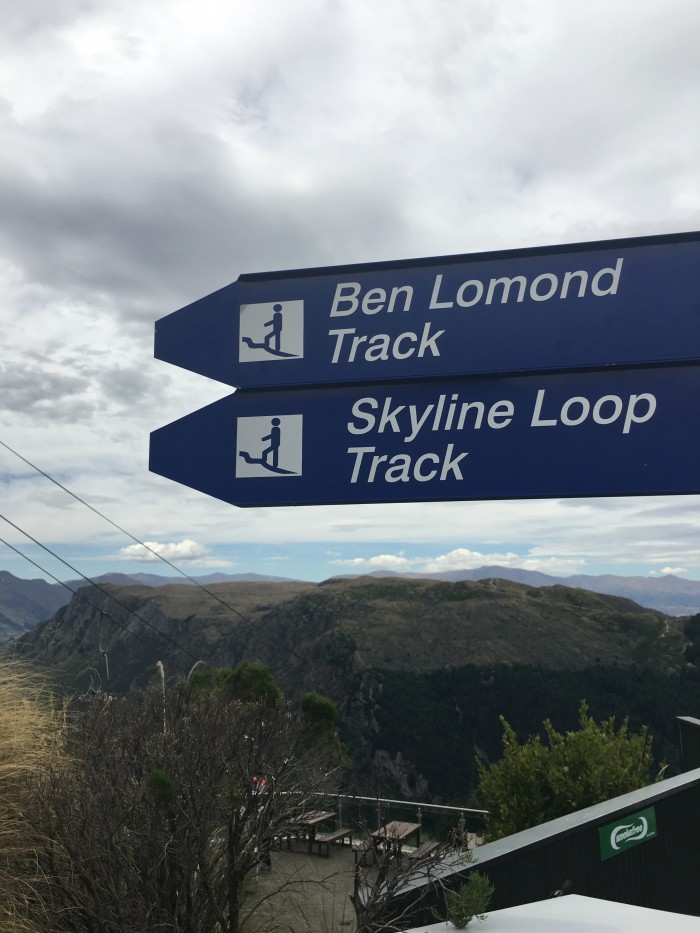 I chose to do a short forest loop hike. The forest walk was nice, though if you take it expecting better views of the valleys below, you won’t see much until the very end of the loop as you return to Skyline Queenstown. 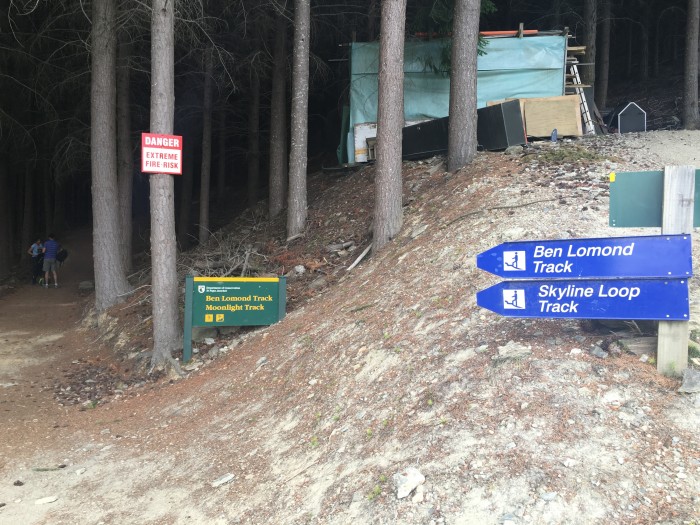 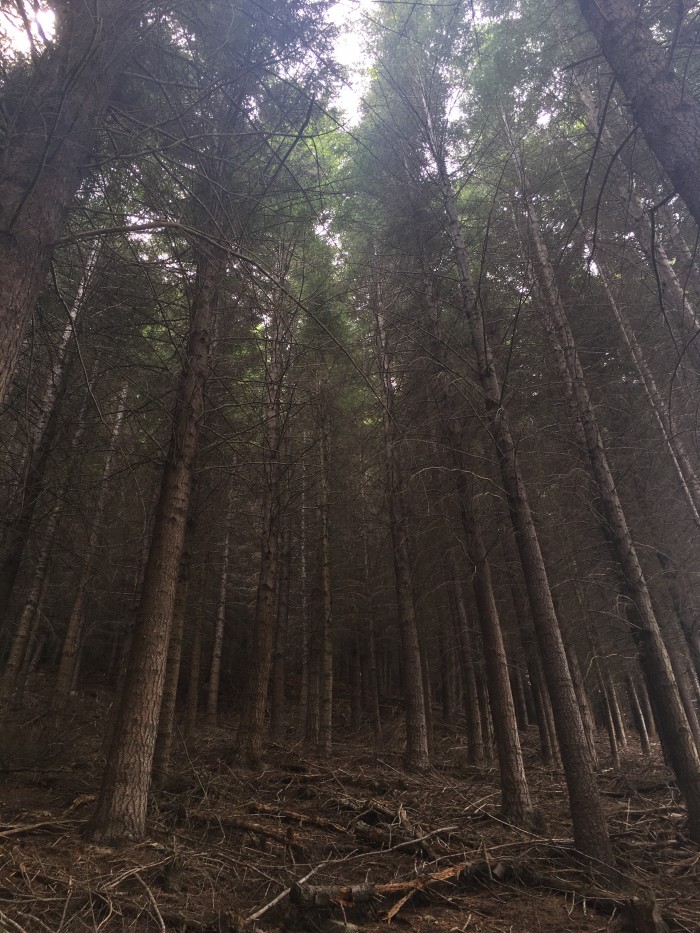 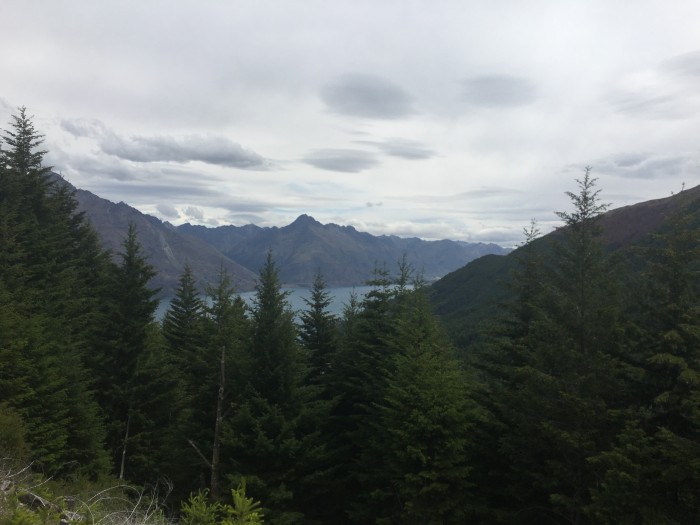 After my hike, I arrived at the top of the luge track, which looked like a lot of fun. There is a chairlift up to the very top of the run, then you ride back down on your luge. Tickets weren’t actually too expensive, so I began to have some pangs of regret. Unfortunately, there seems to be no way to buy a single ticket if you’ve hiked to the top, which seems like a missed opportunity. There weren’t a ton of people out hiking where I was, but a single ride down the hill would have been cool. 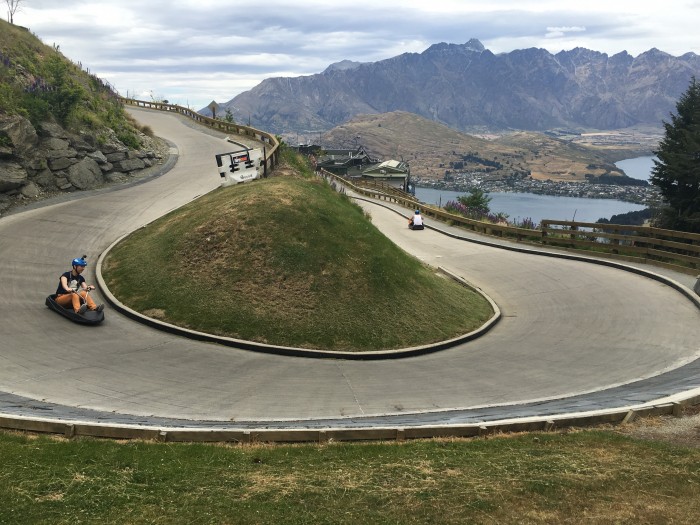 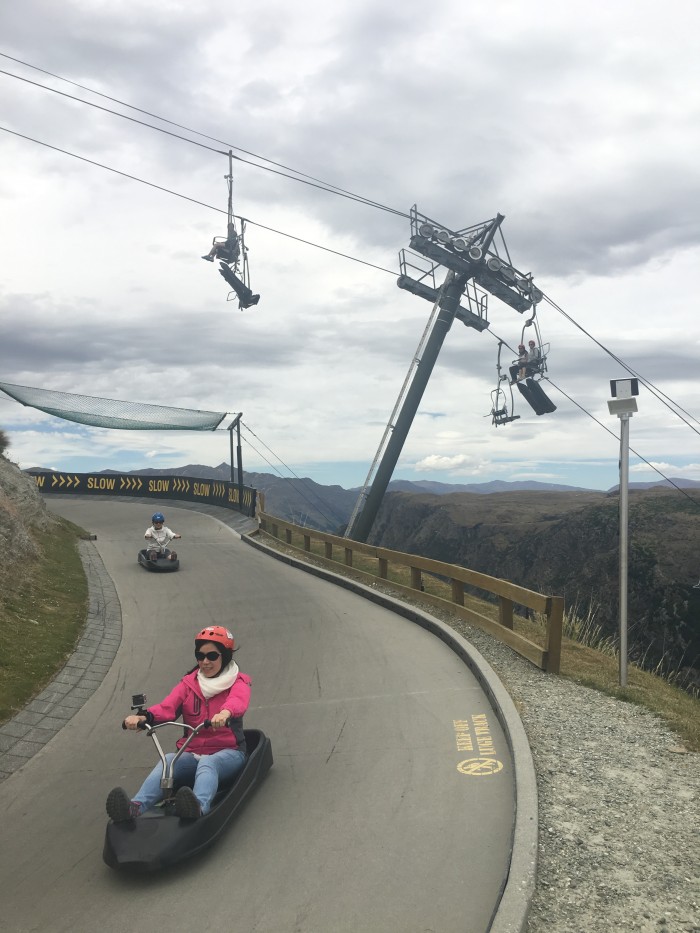 Back on the ground, as I ate some peanut butter banana, gingerbread, and hokey pokey (honeycomb) gelato at Mrs. Ferg Gelateria, I wished that I’d had more time in Queenstown. I would be leaving on the bus to Franz Josef in the morning. 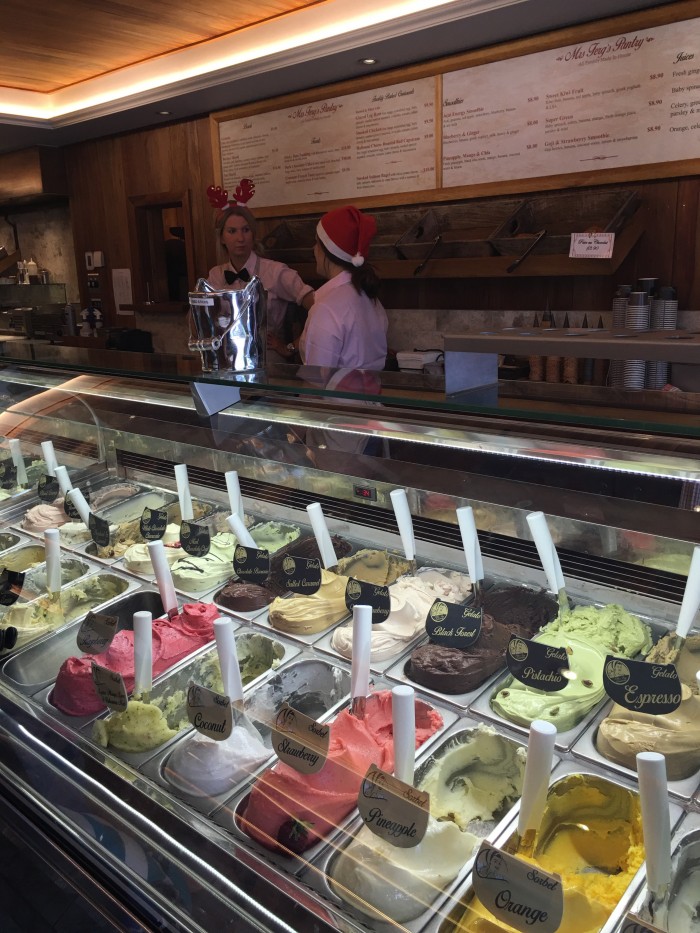 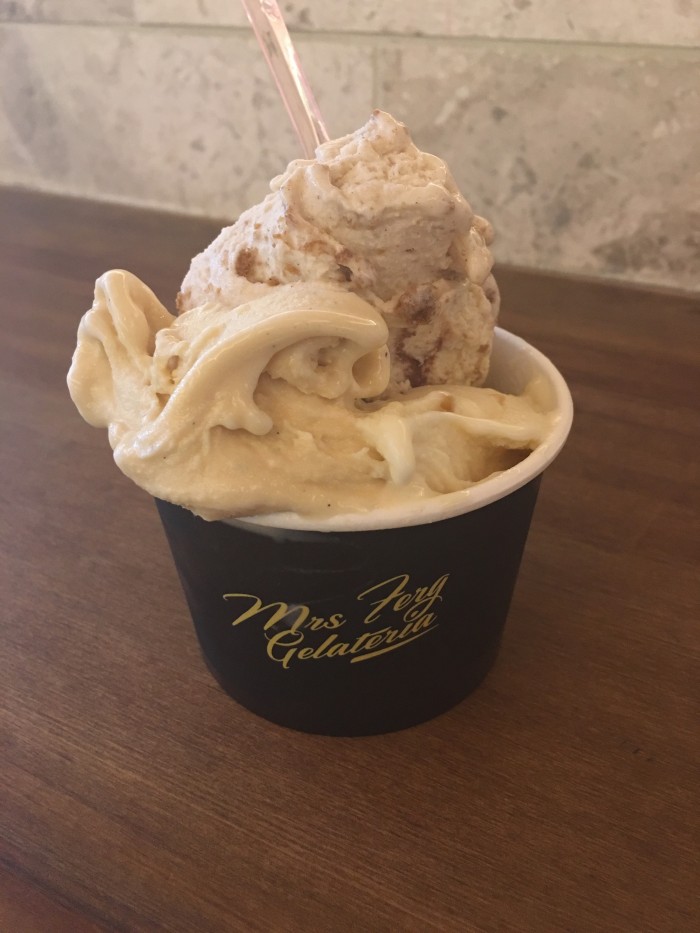 There’s a booming tourist economy in the Queenstown region at the moment, but that has also brought with it a housing shortage. It’s easy to see why both parts of that statement are true. Queenstown is the sort of naturally beautiful place that a lot of people visit, and some stay forever.