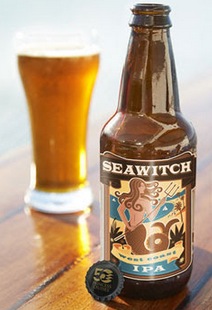 The latest travel company to announce their craft brew offering is Princess Cruises. In an e-mail sent this week, Princess said that a line of beer called “Seawitch” will be available on their ships beginning in November. By 2015, all of their ships will have the beers, which will be brewed by Strike Brewing Company in San Jose, California.

Here’s the full e-mail sent out by Princess Cruises, as forwarded by my dad (thanks!):

Here’s yet another reason to sail Regal Princess in the Caribbean this season! You’ll be one of the first lucky guests to get a taste of our new Princess Cruises Seawitch craft beers, set to debut on Regal Princess this November and introduced on all Princess Cruises ships in 2015. Our unique and exclusive collection of Seawitch craft beers will be created in partnership with breweries known for their distinctive flavors.

Celebrate Princess Cruises 50th Anniversary with our new Seawitch West Coast IPA. Our Seawitch West Coast IPA features a balanced aroma of lightly roasted malt and barley, strongly accented by the crisp dry flavor of a unique hop blend. Our dedicated brewmaster carefully hand crafts this full bodied India Pale Ale to preserve freshness of ingredients and develops the unique profile through the fermentation and aging process. The drinkability of this beer along with its refreshing characteristics makes for a great choice any time of day to enjoy on its own or with your meal.

Our Seawitch West Coast IPA has been developed by the award-winning Strike Brewing Company in San Jose, CA which has taken home a Gold Medal at the US Open Beer Championships as well as 1st Place at the 2012 California State Fair Commercial Craft Brewing Competition. Join our 50th Anniversary Celebration on Regal Princess beginning this November, and get a taste of the good life with our new Seawitch West Coast IPA!

As the craft beer movement has grown, more and more places are having exclusive brews created for their customers. For example, when I was in the UK earlier this year, I had a Virgin Trains Tilting Ale on board a train from Glasgow to London. I’m not familiar with Strike Brewing, but it looks like they’re just starting up a taproom. I’ll be on the lookout for their beers in the future so I can give them a try.