One thing that I love about going to Europe is just how well the public transportation systems are integrated. Munich has several levels of public transportation systems, ranging from buses to light rail to commuter rail, to finally the DB Bahn train network. Everything is well-connected, so getting from the Munich airport to my final destination, the German Alpine town of Garmisch-Partenkirchen, was easy. I was then able to spend the rest of the afternoon hiking in Partnach Gorge

How to get from the Munich Airport to Garmisch-Partenkirchen

I purchased a Bayern Ticket at Munich airport, which allowed me to have unlimited travel in Bavaria for one day for just 23 euros. I ended up purchasing these tickets a few times during my trip. If you are making a round trip journey or even multiple connections around Bavaria, the Bayern Ticket can save you a significant amount of money. In this particular case, a train from Munich airport to Munich Hauptbahnhof would have been around 10 euros, then a train from Munich Hauptbahnhof to Garmisch-Partenkirchen would have been an additional 20 euros, so the Bayern Ticket saved me about 7 euros. Had I travelled even more that day, the savings would have been greater. That’s money that is much better spent on bratwurst & beer!

Since my flight had landed a bit early, immigration was easy. With the public transportation being so fast, I ended up getting to my home for the next few days, the Atlas Grand Hotel, around noon. Both fortunately and unfortunately, my room was nowhere near ready, and they told me to come back around 4pm. I say that it was unfortunate because I was tired and wanted to take a quick nap, but it was actually more fortunate because instead of taking a nap, I decided to go hiking in Partnach Gorge.

Partnach Gorge is a natural wonder that should be at the top of your list of places to see if you are near Garmisch-Partenkirchen.

The Partnach River descends from the German Alps, scraping its way through a narrow canyon before finally splitting between Garmisch and Partenkirchen. The vistas are remarkable both above and below Partnach Gorge, but the gorge itself is one of the most interesting spots I’ve seen in the world. Reminiscent of the slot canyons in Arizona, Partnach Gorge (Partnachklamm in German) is as narrow as about 5 feet wide in places. The canyon is about a half a mile long, and the rock walls rise up to 250 feet above the river. 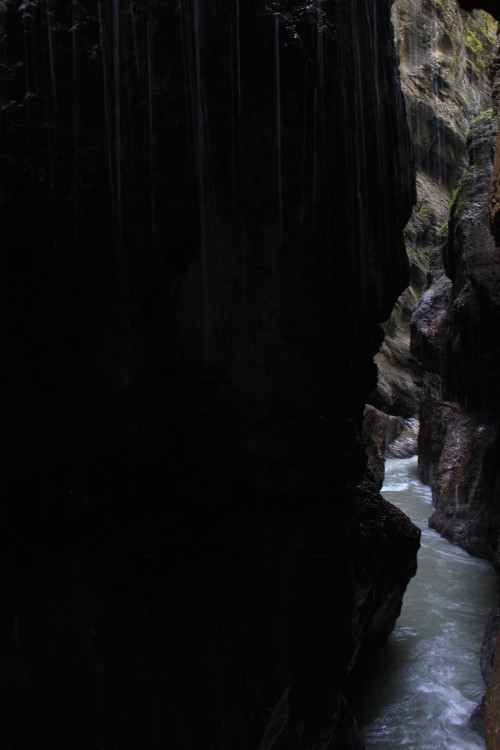 A pathway has been cut into the side, allowing for hikers to pass through the gorge almost year round (heavy snowmelt in the spring can result in necessary closures due to flooding). There are waterfalls all along the entire route that create damp conditions, so I’d recommend wearing a rain jacket. 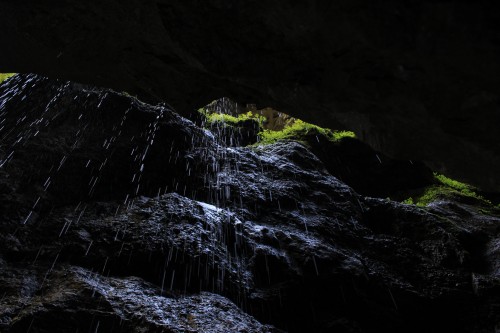 Partnach Gorge is easy to find from Garmish-Partenkirchen. Just follow the river south toward the Olympic Ski Jump center, which you can’t miss, as it towers above everything around it. The area actually hosted the 1936 Winter Olympics. Follow the path from the parking lot to the right of the jumps, continuing along the river. You’ll pass a couple of places selling beer and food, and eventually you’ll come to a kiosk that charges a modest fee for entry.

I spent at least an hour slowly walking through the gorge, taking photos and admiring the views. Between the greyish-blue-green water of the raging river, the waterfalls, and the bright green foliage clinging to the rocks above, the sight was spectacular. I’ve posted a few photos here, but they don’t even come close to capturing the spectacle. It is one of those areas that truly must be seen to be believed. 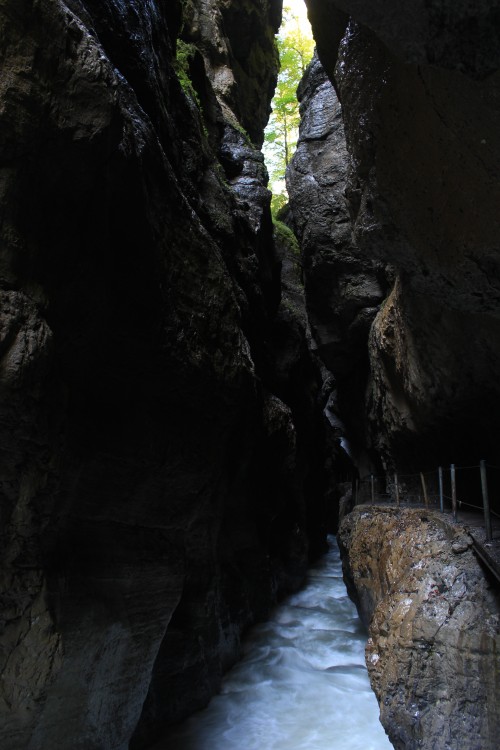 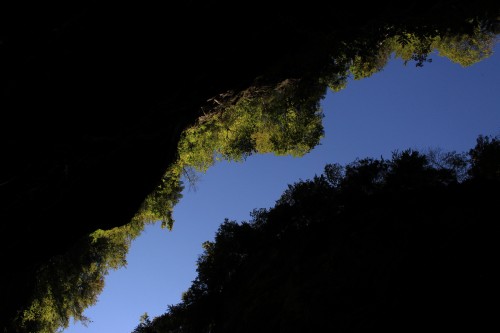 At the end of the narrow canyon of Partnach Gorge, hikers are presented with 3 options: double-back and walk through the gorge again, continue walking along the Partnach River through the wider valley to the south, or take another path up to the left that then heads back north into the hills and eventually back to where you started the hike. I chose the latter of these options.

The resulting destination? One of the most glorious of all German inventions: the mountain beer hut.

After hiking (or more accurately stair-climbing) for about 30 minutes, I arrived at Forsthaus Graseck. It was at this point that I decided to test out my very limited knowledge of the German language. How hard can it be to say “one beer, please”? In my case, very. I can try to blame it on the jet lag and lack of sleep, but what should have been “ein bier, bitte” came out as “un bier, bitte”, as I inexplicably combined Spanish and German. The woman at the counter was nice enough to correct me without shaming me for not even knowing how to say the number “one” in her language, and she managed to figure out what I wanted.

If there’s a better reward for having done a stair-climbing workout than a cold beer, I haven’t found it. 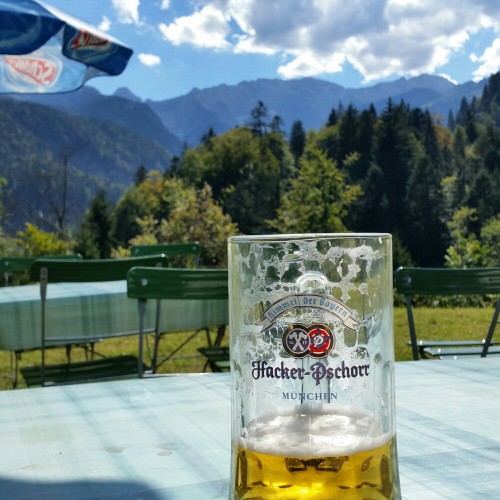 I sat in the sun relaxing for a while before hiking back down the hill toward the Partnach Gorge entrance. From there, I checked out the ski jump center, then took a bus back to my hotel, where I was finally able to check in.

By this point I was exhausted. I went for an early dinner at Gasthof Fraundorfer, which was excellent. I had the veal schnitzel and spatzel. The schnitzel plate had some whipped cream on it. I didn’t know what it was supposed to be for. I tried it with everything, and therefore I can now conclude that whipped cream goes with pretty much any food and more meals should come with it. 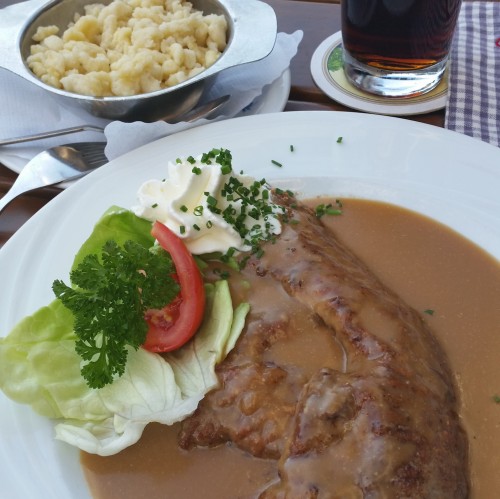 I ended up going to bed around 7pm, then waking up around 1am, setting myself up for an interesting sleeping pattern for the remainder of my trip. But more on that another time.