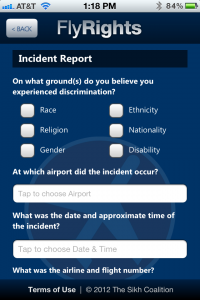 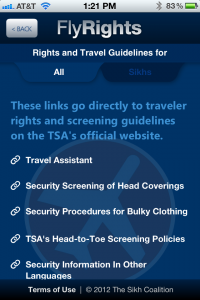 Nearly every day, we hear a story about TSA screenings gone awry. But what about all of the complaints that don’t make the news? Plenty of travelers have faced what they believe to be infringements of their rights, yet most complaints go unreported.

As a result, The Sikh Coalition has developed a smartphone app called FlyRights to make it easier for people to contact the TSA. Using their iPhone or Android, travelers can easily file a complaint with the TSA and Department of Homeland Security if they feel they have been discriminated against at an airport checkpoint.

Why did you create FlyRights?
o For years, Sikh travelers have complained of discriminatory screening and pat downs at
airport checkpoints across the United States. At some airports, the Sikh Coalition has found
that 100% of Sikh travelers report they are subjected to unfair secondary screening.
o According to the Office of Civil Rights and Civil Liberties at DHS, only 11 complaints of
improper screening by the TSA were filed during the first two quarters of 2011. The Sikh
Coalition believes that the app will significantly increase the number of complaints filed,
providing transparency on the extent of profiling at the nation’s airports.
o We therefore created this application to bridge the gap between community frustration about
airport profiling and official action. Complaints filed through the innovative app will be
reviewed as official complaints by TSA and DHS.

Are Sikhs, Muslims, and South Asians the only groups concerned about TSA profiling? In November
2011, a disturbing news report found that a group of TSA screeners called the “Mexicutioners” by
their colleagues deliberately subjected Mexican air travelers to additional stops at
Honolulu International Airport. The allegations followed a June 2011 report in the New Jersey Star-
Ledger detailing how TSA officers deliberately subjected Mexican and Dominican travelers to extra
scrutiny.

While the app was created due to complaints in the Sikh community, anyone can use it if they believe they were discriminated against on the basis of their race, ethnicity, religion, nationality, gender or disability. In addition to the complaint form, the app also includes useful links to TSA policies.

Interestingly, the TSA touted their Office of Civil Rights and Liberties on their blog today. According to the site, “A Civil Liberties complaint concerns a perceived infringement on the Constitutional freedoms of speech, religion, and assembly.” You will note that this makes no mention of any other element of the Bill of Rights, particularly those pesky parts dealing with unreasonable search and seizure.

Screwed by the TSA? Now there’s an app for that. [Boing Boing]