If you follow me on social media, you may know that I have been in Europe since the beginning of March. Needless to say, a lot has happened over that time, and we’re only three weeks into the month. It’s taken me some time to gather my thoughts on what has happened.

First off, this post will contain no medical advice or travel advice, other than to say that everyone all over the world should stay inside, be practicing social distancing & self-isolation right now, & quarantining and/or getting medical attention if they have symptoms. There are too many travel bloggers out there who have tried to cash in on quick clicks during this epidemic, and I won’t be one of them. Few of these blog posts have contributed anything useful, & most aren’t being kept updated in an ever-changing world. I’m not even mentioning the name of the virus because I don’t want anyone to search & accidentally end up here thinking I have any answers. I do not. I’m just trying to do the best I can, like most people. Get proper information from medical & scientific sources, as well as governments (well, at least those governments that can be trusted to have the well-being of their inhabitants foremost in mind). This post is mostly just to update everyone who has been concerned & wondering what I have been up to. The quick summary is that I am perfectly fine, and it’s most of you who I am far more worried about, especially if you are in the United States.

My decision to still go to Europe

The original centerpiece of my trip to Europe was going to be 2.5 weeks in Sicily. Part of this time would be spent attending TBEX Catania. I’ve attended several TBEX events, and I was looking forward to this one. I am part Sicilian, so I was especially eager for the opportunity to return to my roots. The wonderful food & some sunshine would be added bonuses.

On March 2nd, the day before I was set to leave for Europe (first spending a couple of days in Amsterdam), TBEX was postponed. At the time, the outbreak was growing in northern Italy. With Sicily being so far away (Catania is approximately an 800 mi (1,300 km) drive from Milan) & having very few cases, plus having pre-paid for most of my trip, I decided to still go, as did about 10% of the original 400-ish attendees. Some of the associated tours & FAM trips were still scheduled. Had the conference been in northern Italy, there’s no way I would have gone, but Sicily seemed fine, and the WHO was not recommending travel restrictions. As of this writing (March 23rd), Sicily still has one of the lowest case numbers in Italy, in fact far lower per capita than most of Europe.

I knew there was a risk of travel plans needing to change, but thankfully I work remotely, so I am fine anywhere in the world as long as I have an internet connection. I purchased additional health insurance just in case, made sure to bring extra personal items, including a thermometer, in case I feared I was exhibiting any symptoms at any point. I went with the understanding that I would take precautions to keep away from people, to be extra vigilant about cleanliness, and to follow whatever local directives were given.

My three-ish days in Catania, Sicily

Saturday evening in Sicily was a typical night. After checking into my apartment, I had a quiet dinner with a couple of friends who had also been on the same flight from Amsterdam. We had delicious pasta, charcuterie, cheese, horse meatballs, and Sicilian sausage along with local wine.

On Sunday, we went to a villa surrounded by orange groves that also hosts wine tastings. It was a lovely place.

I was only able to spend a couple of days in Sicily before I had to leave, but in that time I managed to have plenty of Etna wines & Sicilian salami #discovercatania

At this point, most everything was normal, but over the course of the afternoon, the changes would be sudden. First, Monday’s all-day food tour of a nearby town was cancelled. We’d really been looking forward to it, as we were supposed to go truffle hunting & see several food demonstrations (with tastings of course!) including pasta, cannoli, pizza, sausage, & more. But the Italian government was finally beginning to implement restrictions on restaurants, along with a lockdown of northern Italy. That evening, we were able to go for quiet drinks, as long as there was adequate personal distance in bars & restaurants. With Monday now free, I went for a walk, exploring Catania while visiting a couple of cannoli shops.

While I was in Sicily, I had many cannoli. The ones at I Dolci di Nonna Vincenza in Catania were my favorites, especially the almond. They also have a shop in the airport, so I regret not filling my carry-on when I left for the Netherlands #discovercatania

Over a quiet cocktail later that night, we noticed the staff watching something on TV. A couple of minutes later, our phones lit up with WhatsApp messages. All of Italy would be locked down more starting the next day, including Sicily, because the lockdown of the north had gone so poorly. While sipping one last cocktail, I booked a flight back to Amsterdam for the next morning.

At some point, I’ll have more blog posts specific to my quick visit to beautiful Catania. I did enjoy the brief time I spent there. I hope that I will be able to return soon, whether it’s for a rescheduled TBEX or on my own. The sole positive to leaving was that I didn’t gain the 20 pounds I expected to put on from all the Sicilian food.

Back to the Netherlands

Since I can work from anywhere, I have rented an apartment in Leiden in the Netherlands. Famous for being the birthplace of Rembrandt, it’s a pretty little city filled with canals & nice paths to walk along where you can have plenty of space if you do go outside. This is the view out my window. 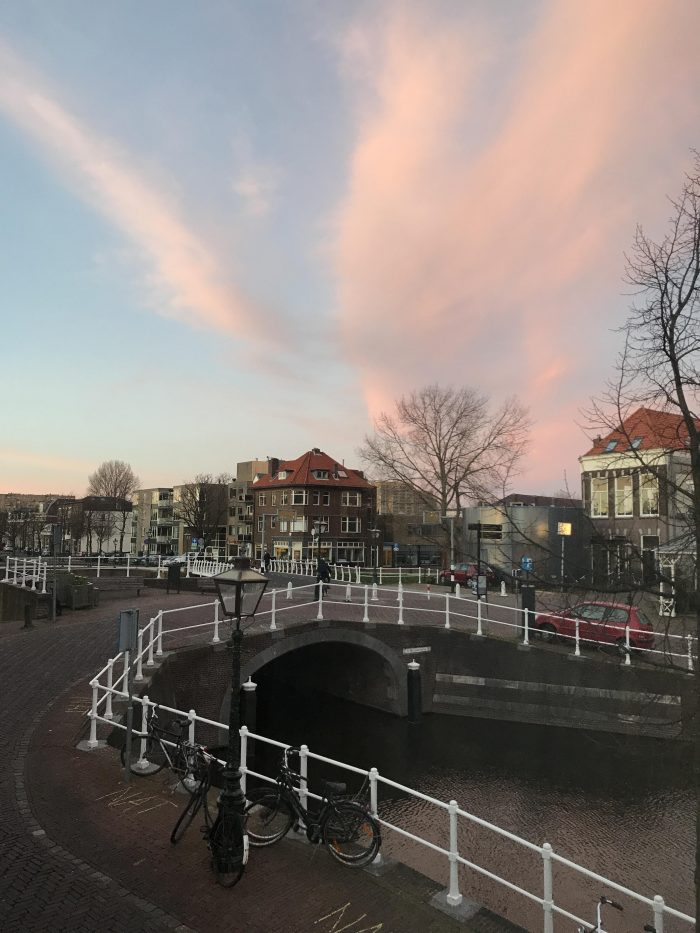 This apartment is probably about four times the size of my apartment back home, which is being taken care of. Back home, I would be similarly sheltering-in-place right now. This extra indoor space is a big bonus when you’re self-isolating. A few days after my return to the Netherlands, the country also implemented more stringent measures. 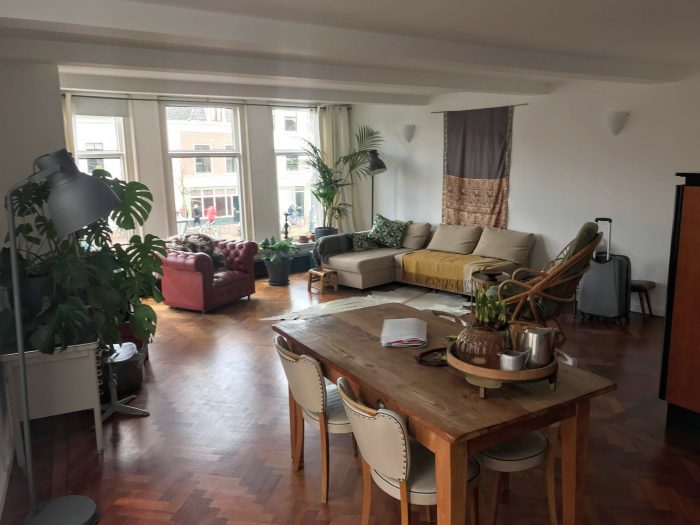 I am staying inside as much as possible. I’ve only been out a couple of times to buy necessary food supplies & get a bit of exercise & fresh air on the rare sunny days. On these couple of walks, I have kept my distance from people while getting to see a bit of Leiden. 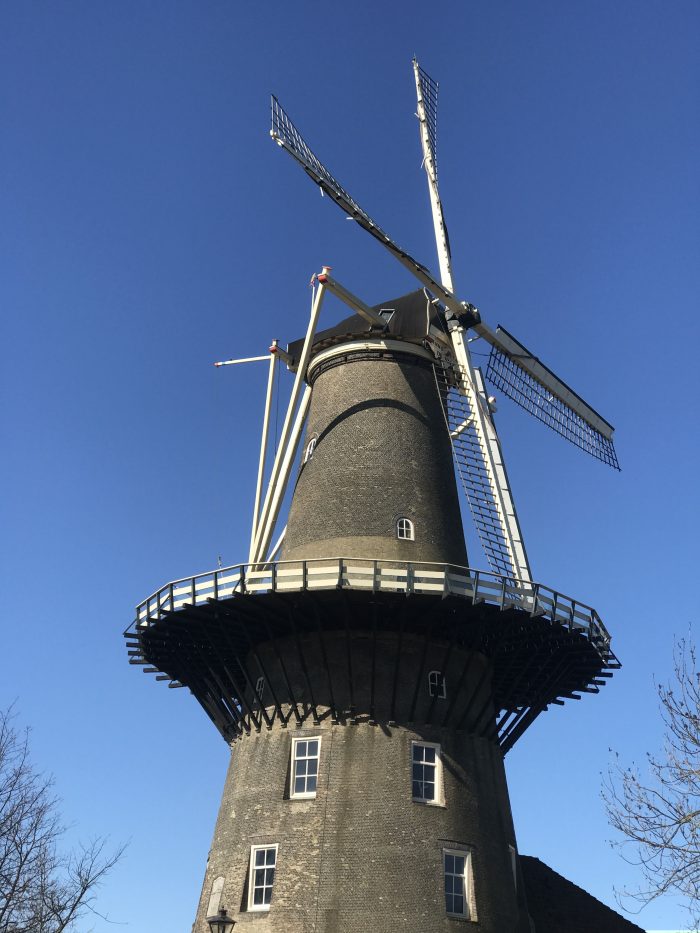 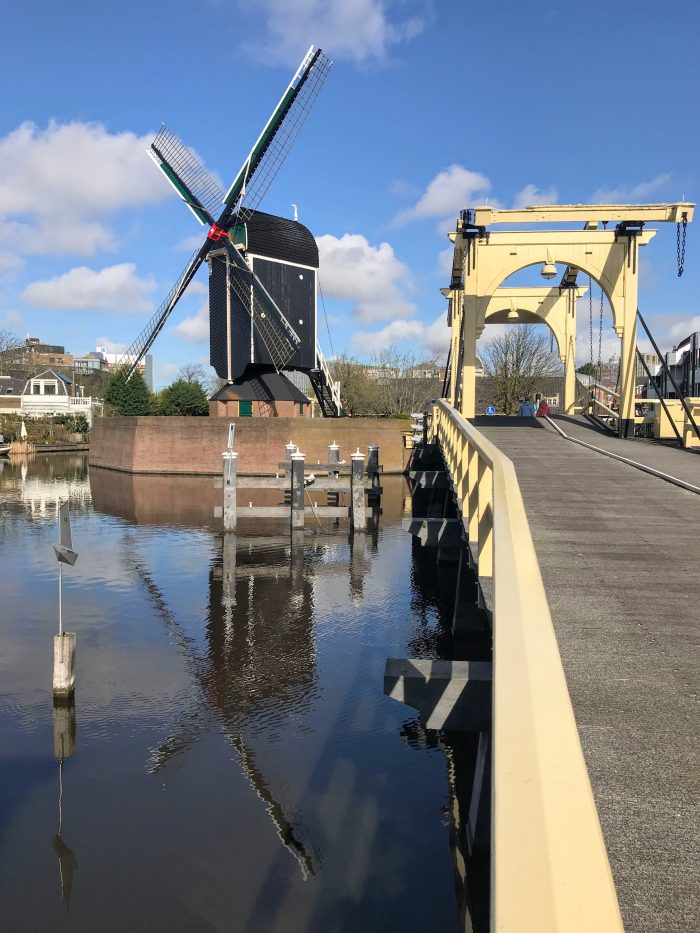 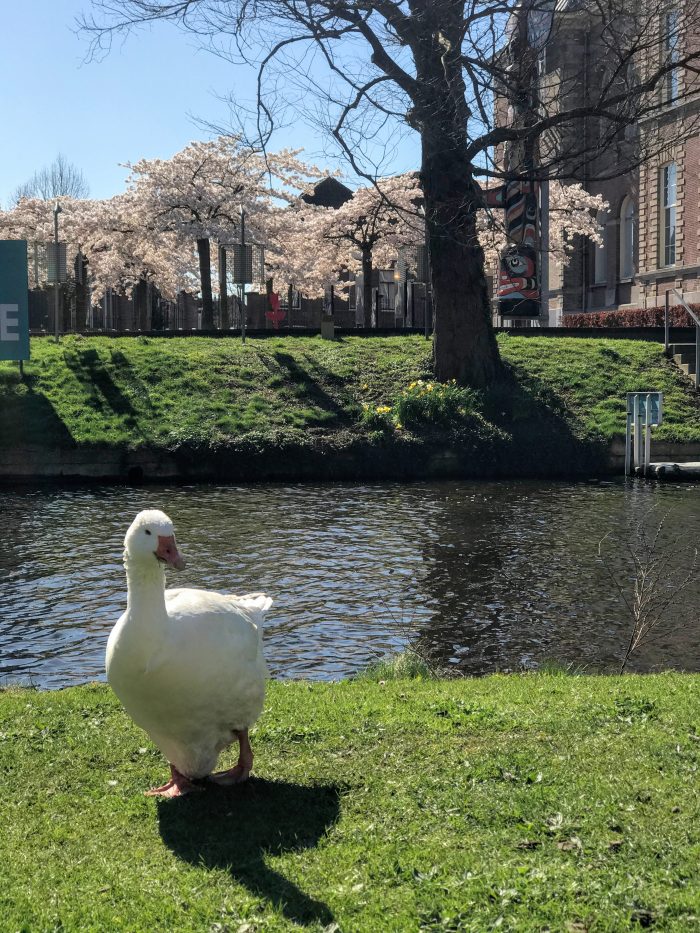 While we’re all stuck inside, here are some great isolation tips from astronaut Scott Kelly.

The U.S. State Department has warned Americans to either return home or to be prepared to be out of the country indefinitely. I am going to do the latter. When the first round of flight cuts was announced, people packed flights & airports, cramming hallways for hours on end. Surely some of them were infected, and there’s been no proper monitoring. Tests have been limited all over the United States. The actual rate of infection is far higher than the published numbers. I am personally aware of a couple of friends who had all the symptoms, but they were unable to get tested. Social media is filled with similar accounts of people who were denied testing, yet clearly should have been. Part of me wonders if I had it already, as I had similar symptoms in mid-January. Eventually, there will be antibody tests developed, but I will continue to act accordingly to not accidentally spread it to anyone.

My neighborhood back home has of the densest senior populations in the United States. I fear for what will happen if & when the virus takes hold in those buildings. While local officials in California have been leading the country when it comes to protecting people, it will be too late for many. The virus has likely already been in the community for a couple of months.

The way this has been handled in the United States has been horrific. The effort to downplay the extent of the outbreak will be remembered in history. As will the profiteers in the Senate who, after being briefed on just how bad the epidemic could get, sold off millions of dollars of stocks, while warning their rich constituents & telling the rest of us not to worry. Hundreds of thousands (or even millions) of people could die as a result. From the moment this was observed to be a threat, production should have started on WHO tests, ventilators, masks, and other vital supplies. This is what real leadership is. And this is the leadership that has failed the United States. It is not a place I want to be any time soon. More and more people are starting to see just how bad the health care system & social safety net is. There’s no excuse for a country that is so rich to not take care of its people. I am afraid for just how bad the situation is going to get in the United States, given how poor the response has been. I hope I am wrong. But so far I have seen no signs of that being the case.

I am very much aware of just how privileged I am to be able to be flexible with both my job & my living situation. I am able to hunker down with much less disruption to my life than what other people are going through. If you are similarly well-off, please consider donating to those who are less fortunate. There are a lot of people in a lot of industries who could use the help right now. If you still can, please support local businesses. Food banks are doing great work to keep people fed, and there are also groups working to support service industry workers, entertainers, and others who are being impacted by shutdowns. My heart goes out to everyone who has fallen ill and lost loved ones. I have the utmost appreciation for everyone who is still on the front lines during this crisis, especially health care professionals, those who are still working to make sure everyone has food & necessary supplies, & those who are keeping all of those places clean.

Wherever you are in the world, we are all this together. This virus knows no borders and no discrimination, no matter how much some people will try to make it so or believe it can’t affect them. It is coming for all of us. The best we can do right now is to love each other by staying away from each other, by staying inside, by keeping our distance when we do go outside, by washing our hands, & by following all local protocols. Someday, we’ll come out of this on the other side, with a changed world, but one that demonstrated just how well the entire planet could band together against a common enemy.