The Boeing 747 is probably the most iconic plane on the planet. What better way for an iconic band such as Iron Maiden to tour than by flying around the world on one? How about if the plane was also piloted by their lead singer, Bruce Dickinson?

Before we move on, let’s put on some Iron Maiden.

Good, now we can get to the story. Iron Maiden’s 2016 “The Book Of Souls” World Tour is kicking off soon, but the band is already preparing, having flown their 747 from Cardiff, Wales to Fort Lauderdale, Florida.

Bruce Dickinson gave a press conference when the plane arrived in Fort Lauderdale, explaining just why a 747 was necessary.

“The [757] is just not big enough for what we’ve got in mind in terms of a show. So what we’ve got on board at the moment is the stage show. I’ve actually been in Miami rehearsing for about two and a half weeks before this flight. So I actually flew back from Miami to pick up the airplane. And because it had been longer than a certain period, I had to jump back in the sim, do some landings and then fly the airplane over. So we pick up the rest of our equipment… In fact, we’ll be spending tomorrow, basically, putting all the gear together and making sure it fits. Everything we need will be on the airplane, and all the technicians and baggage and everything else. We’re going all around the world. I mean, we’re doing some… I mean, [from] Perth, Australia to Cape Town [to] Shanghai to New Zealand. We’re really going ’round the planet.”

That’s an epic tour for an epic band on an epic plane.

In case you’re an #AVGeek, here are the specs comparing Iron Maiden’s old 757 with their new 747. 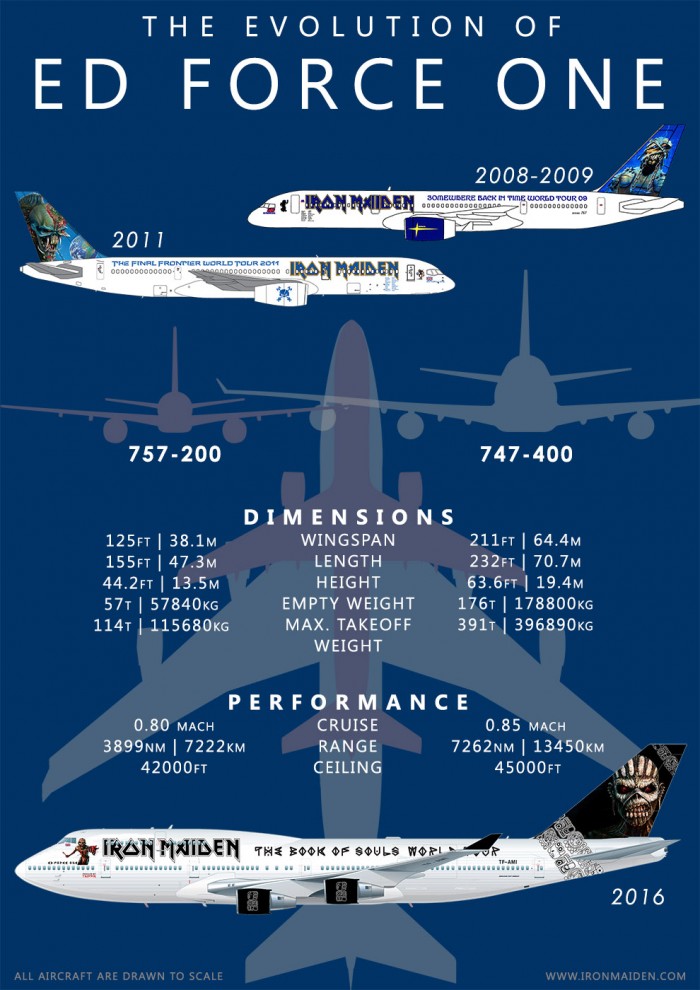