My first destination on my trip to Northern Europe was Glasgow, Scotland, a city I lived in for two years. Normally I would stay with friends, but thanks to a family-wide illness that week, we all agreed it would be better if I stayed elsewhere. I booked the Holiday Inn Express Glasgow City Centre Riverside, which was convenient to everywhere I would be going in Glasgow, and it also allowed me to take advantage of some points earning promotions that IHG was running at the time.

The Holiday Inn Express Glasgow City Centre Riverside is a short walk from Glasgow Central station as well as the Glasgow Underground. There are also plenty of bus lines running nearby, including the buses that run to the airport. Taxis are also easily found. The Glasgow city centre is fairly compact, so it’s easy to get around using any method. The Glasgow Gallery of Modern Art is also located not far from the hotel. The exhibits are changed frequently, so it’s one of my favorite places to go in the city each time I visit, plus it’s free to enter. Even if modern art isn’t your thing, walk by it to check out the Duke of Wellington statue, complete with traffic cone on top. 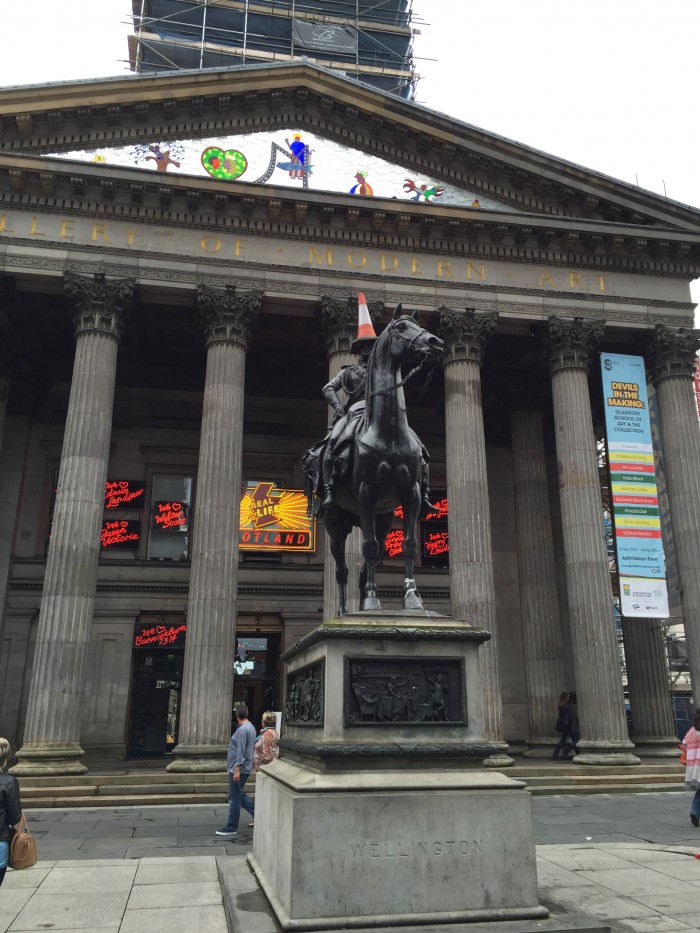 I walked from Glasgow Central station to the hotel, following the River Clyde. The Clyde was in a sorry state a couple of decades ago, but in recent years the area has rapidly improved. I enjoy seeing just how much nicer Glasgow has become each time I go back. 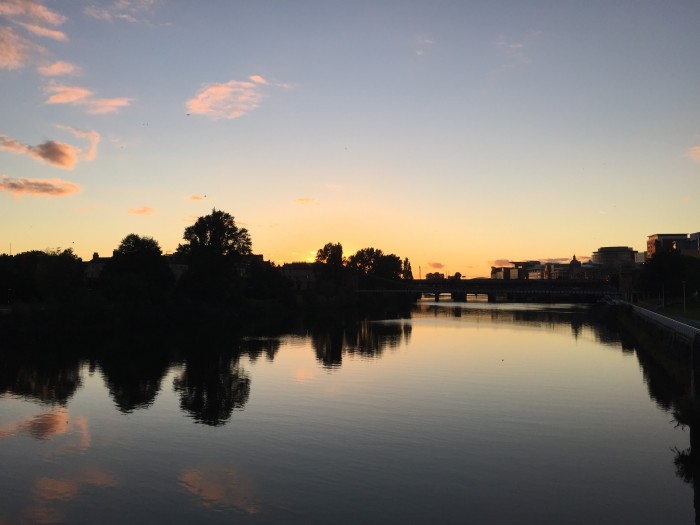 Upon checking in to the Holiday Inn Express, I was offered an IHG Spire amenity, a status I had just recently obtained. It’s the highest level of IHG, but it’s unimpressive. It’s up to each hotel to decide what to offer for IHG Spire, and so far it seems that most have no idea what to do about it, only that they should at least do something. I was offered either 300 IHG points (roughly $2.10) or a free snack & drink from the hotel bar. I didn’t feel like having a drink, and I was going to be meeting friends anyway, so I took the points, even though technically the other option would have been worth more. It’s better than nothing, but the status level is hardly worth pushing for based on the welcome amenity alone. IHG & their properties need to work on better perks. In the case of the Holiday Inn Express in Glasgow, offering free premium high speed internet to Spire members would be a welcome addition, as the current WiFi offering at the hotel is abysmally slow. 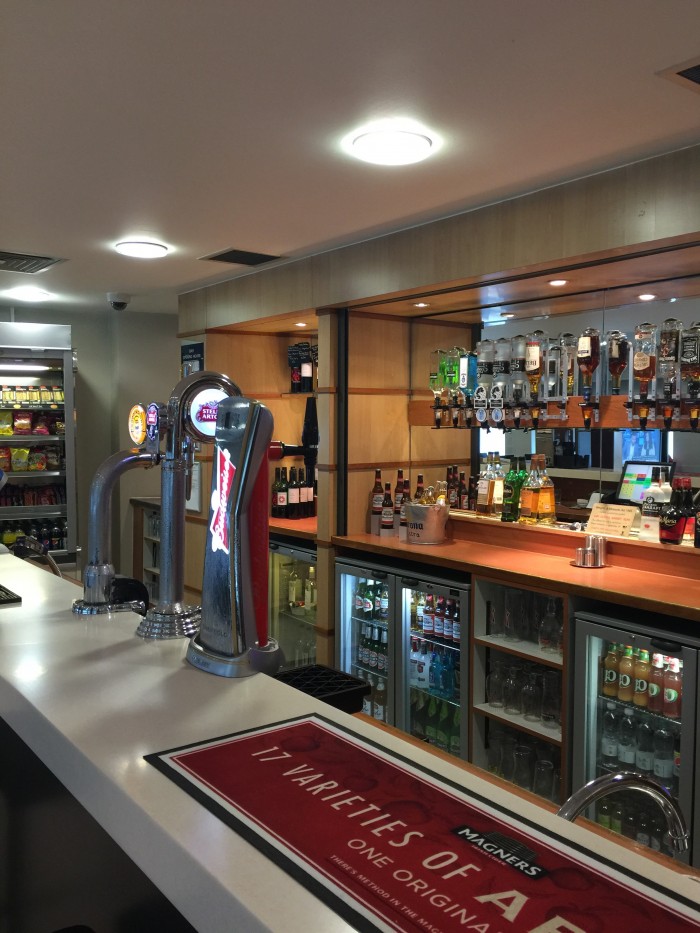 My room was a bit dated, though it was fine. I wasn’t around much, aside from when I was relaxing on my final night in Glasgow. One major issue was that there weren’t many electrical outlets, especially not near the beds. 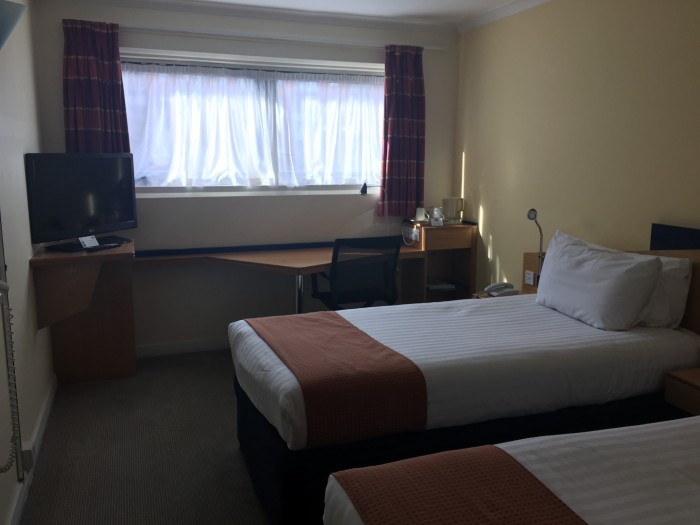 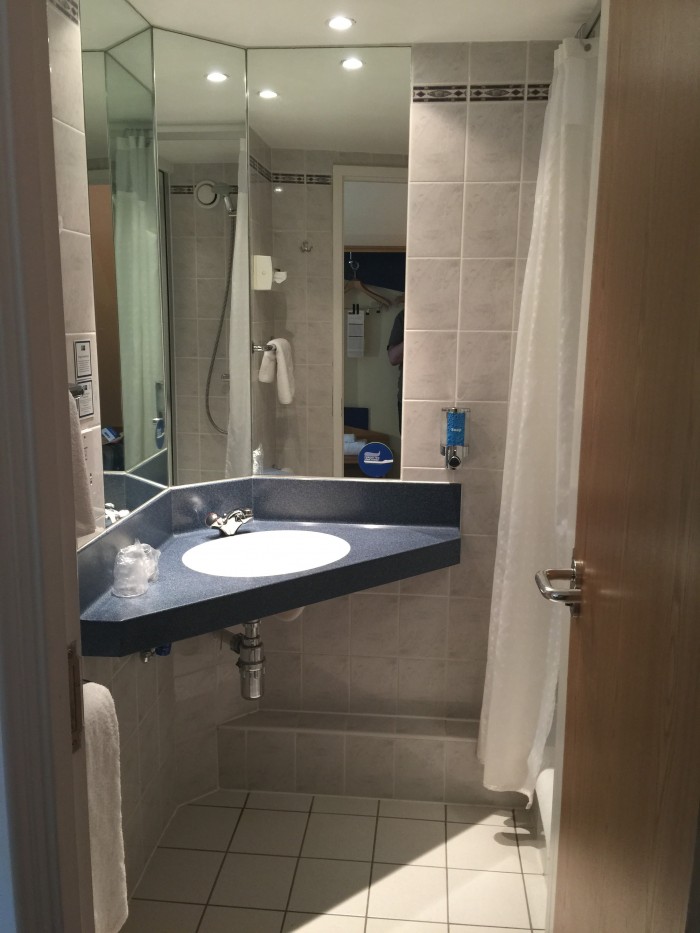 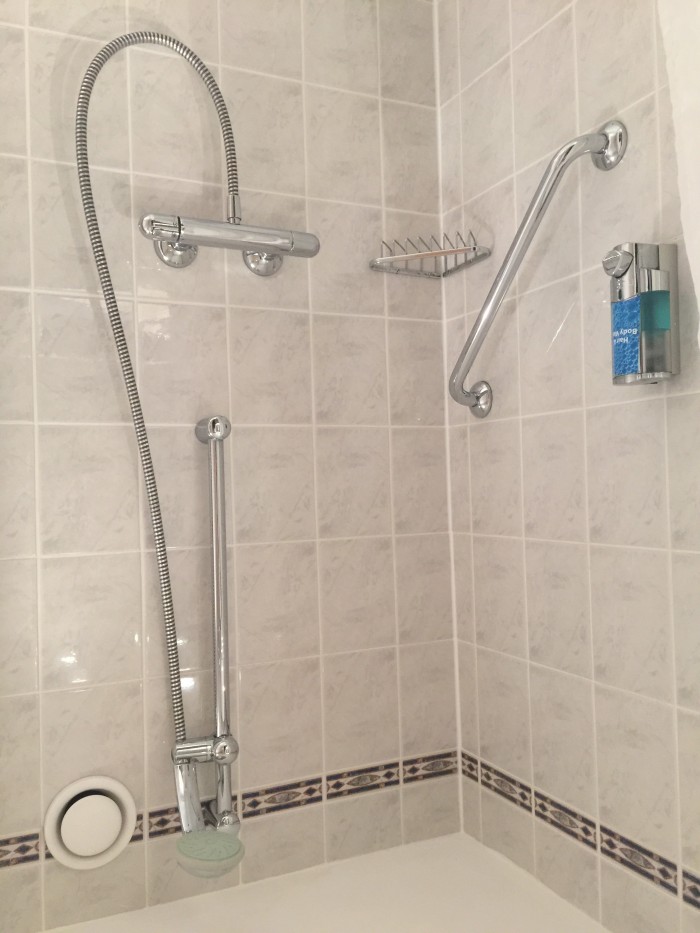 The view could have been better, though facing the parking lot rather than the street or the Clyde at least meant that it was quiet. The same could not be said for the cleaners, who made a bit more noise outside my room than I would have liked in the mornings. It was reminiscent of my university days in the city. Though in all fairness they weren’t loud early, I was jet-lagged & attempting to sleep in a bit after late nights out with friends. 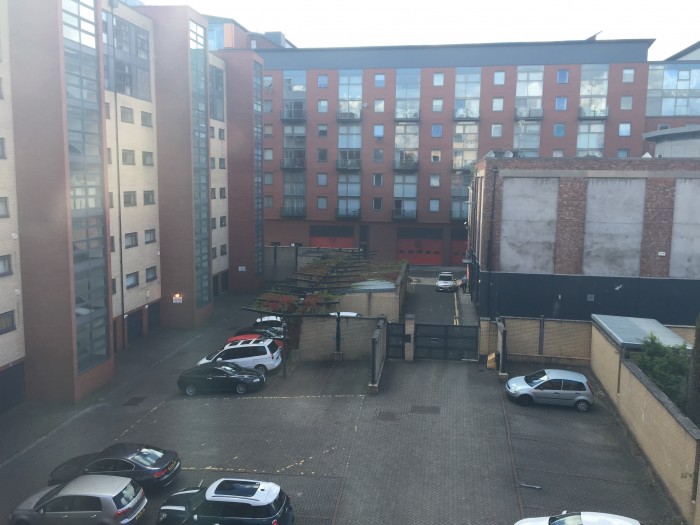 Since it’s a Holiday Inn Express, breakfast is included each morning. The British love a good breakfast. While there could have been a few more protein options to make it a true Scottish breakfast, the buffet still offered plenty of eggs, beans, sausages, breads, cereals, fruit, cheese, juice, and more. 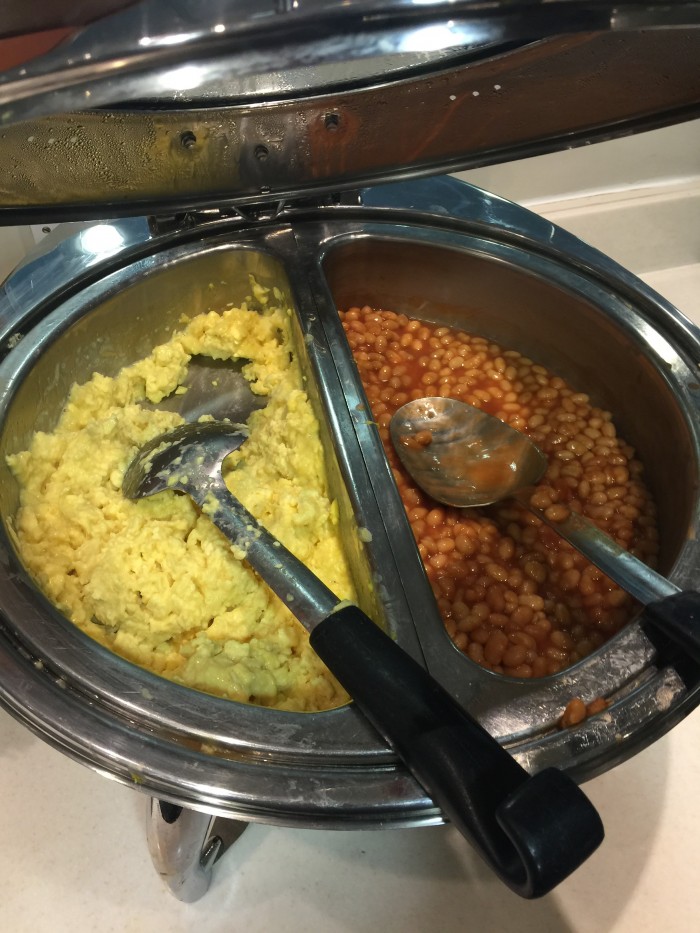 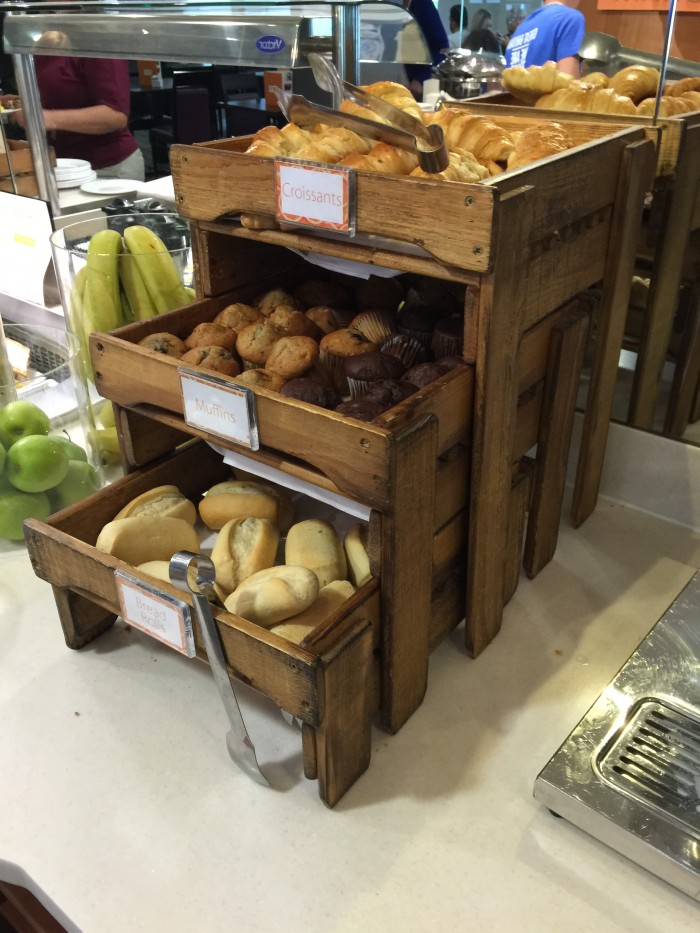 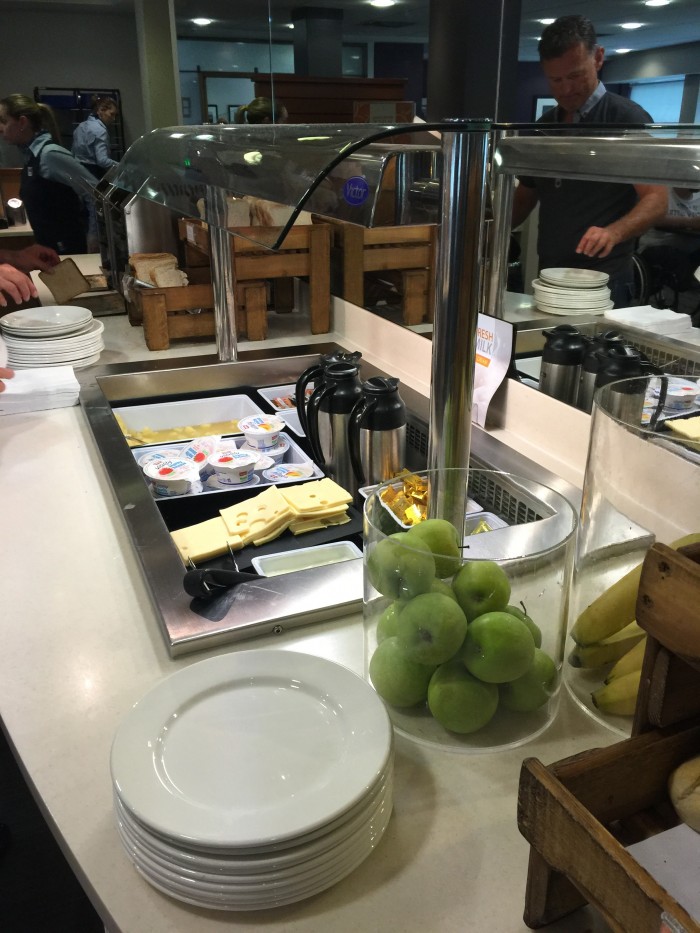 I had a great weekend in Glasgow with friends, reminiscing while having some good local beer. If I’m looking for a hotel again in Glasgow, I’ll consider the Holiday Inn Express Glasgow City Centre Riverside, as it was in a solid location & it was reasonably priced at the last minute, even though the Davis Cup semifinals were taking place in the city that weekend and most hotels were booked up.