My time in Europe was over, at least for this trip. I was leaving on an early morning flight from Helsinki airport. Thankfully, the public transportation system was running that early.

How early was it? So early that I had a private subway ride from the station near my hotel all the way to the Helsinki train station. Granted, I got on at the beginning of the line, and I was only on for two stops, and it was around 5:00am, but hey, it was pretty cool to get a private train. 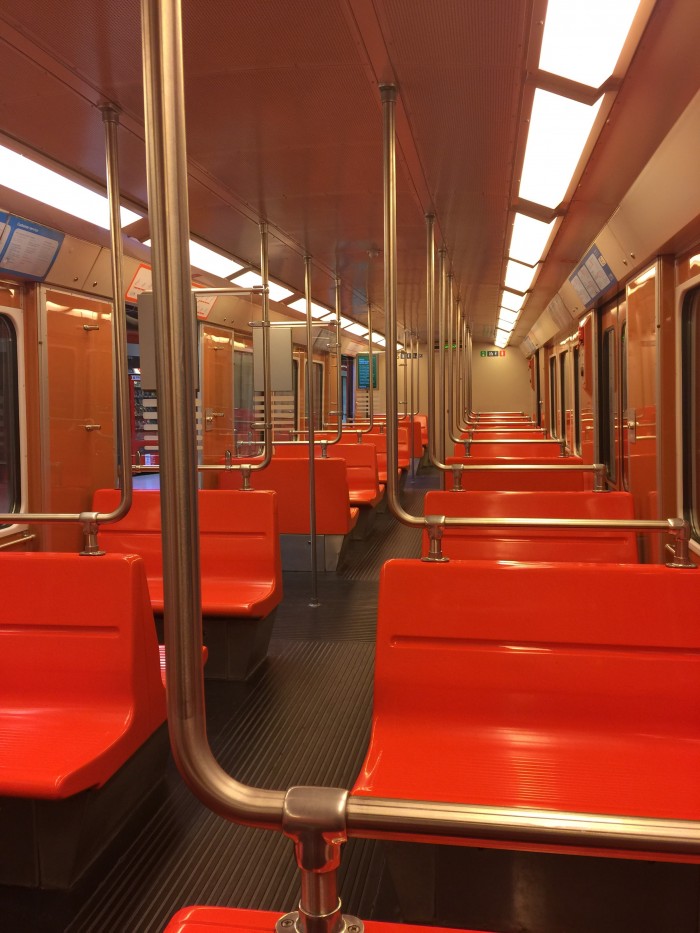 From there, I transferred to Helsinki’s new railway line to the airport. The line runs in a loop, with the airport nearly in the middle, so you can take either the P or the I, since they alternate schedules. Even if one ride is a bit longer, just take whatever is next. The ride is also included on the Helsinki day transit card if you have it, or it’s only 5 euros for a single ride.

Once I arrived at Helsinki airport, it was still dark. At the time of this writing, the airport train station is actually quite a bit away from the terminal, deep underground. After riding up what seemed like a dozen escalators, then walking for about 15 minutes, I was finally at the Finnair check-in desk.

I was the 2nd person in line for the business class priority check-in. No big deal, though the guy in front of me thought he was so important that he could just talk on his cellphone the entire time he was at the desk, then even when he was all set, he continued to stand there and chat on the phone rather than getting his things and walking away.

I had no problems checking in for all of my flights that day, so I headed to the Finnair lounge that is located in the non-Schengen area of the airport. It’s beyond passport control, so it’s a much quieter area of the airport, especially around 7am.

There are actually two parts to the Finnair lounge in Helsinki, business class and first class. I didn’t realize this when I checked in, so I had shown the boarding pass for my first flight of the day, which was on Finnair. Had I shown my first class American boarding pass for my next flight from London, then I would have seen the other part of the lounge. Oops. I hear that the main highlight of the Finnair first class lounge is a sauna, which I wouldn’t have had time for anyway. 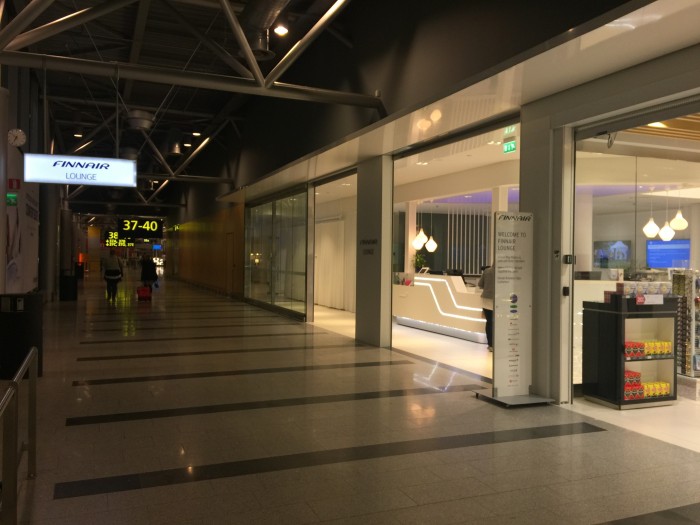 The Finnair business class lounge is nice enough as it is. Everything looks new, there’s lots of space, and it’s very bright. The decor is simple & very European. 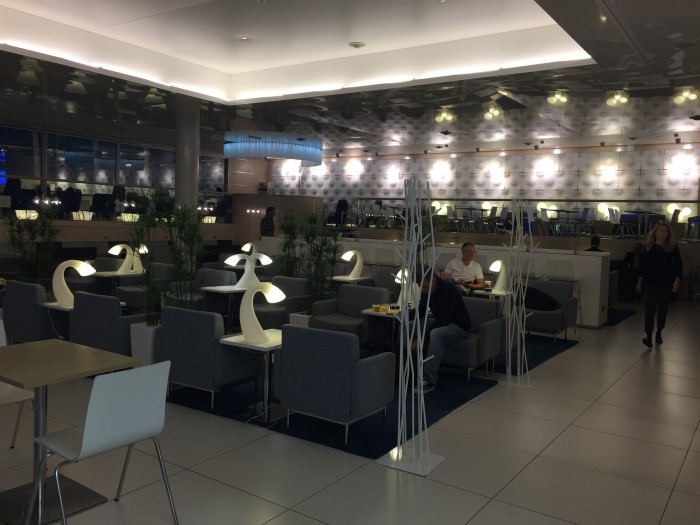 So much care has been put into the look that you can even buy the mugs & other glassware if you like them that much. 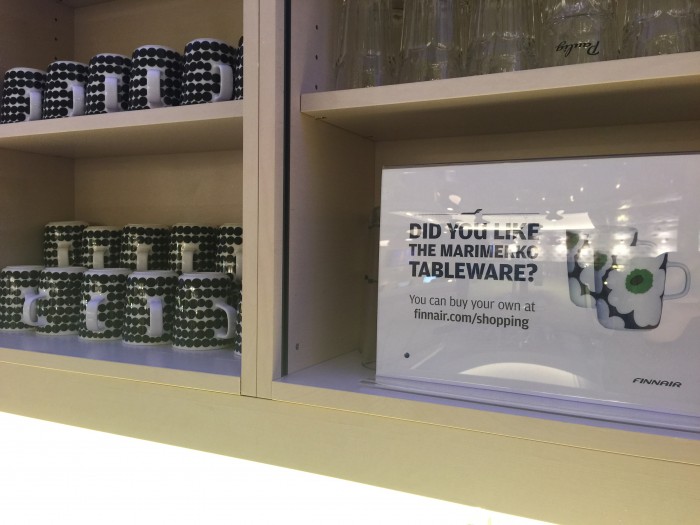 There was a ton of seating of varying types, including these crazy reclining things that I had difficulty staying upright in. 7am is too early for me to be trying to figure out how to operate a chair. 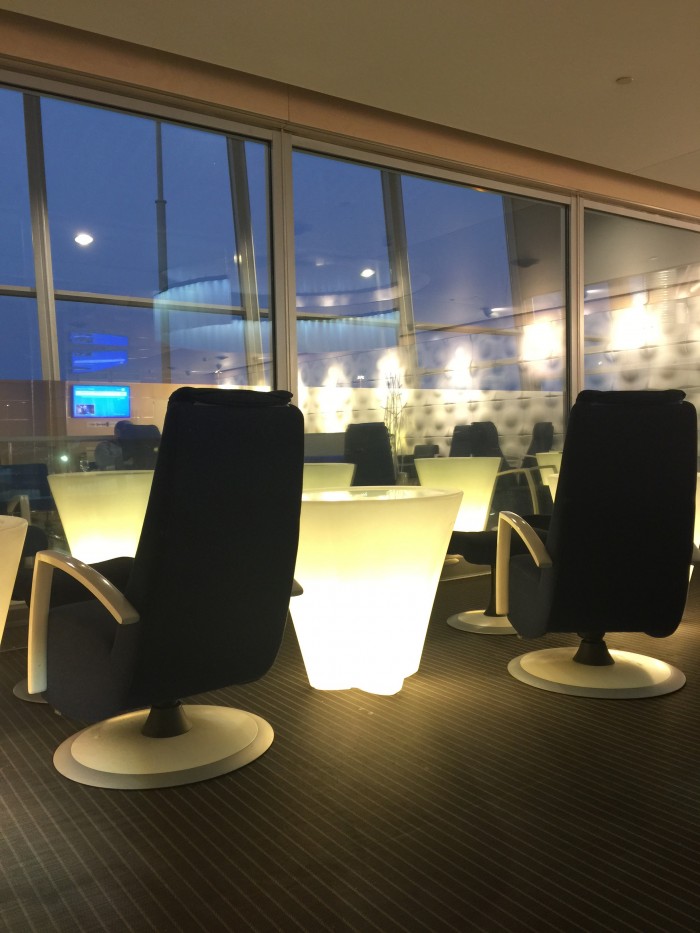 There was beer and wine available, though the full bar wasn’t open yet. 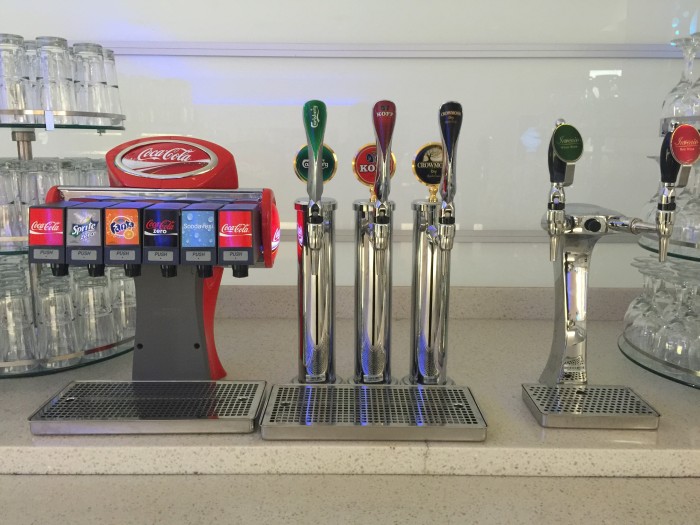 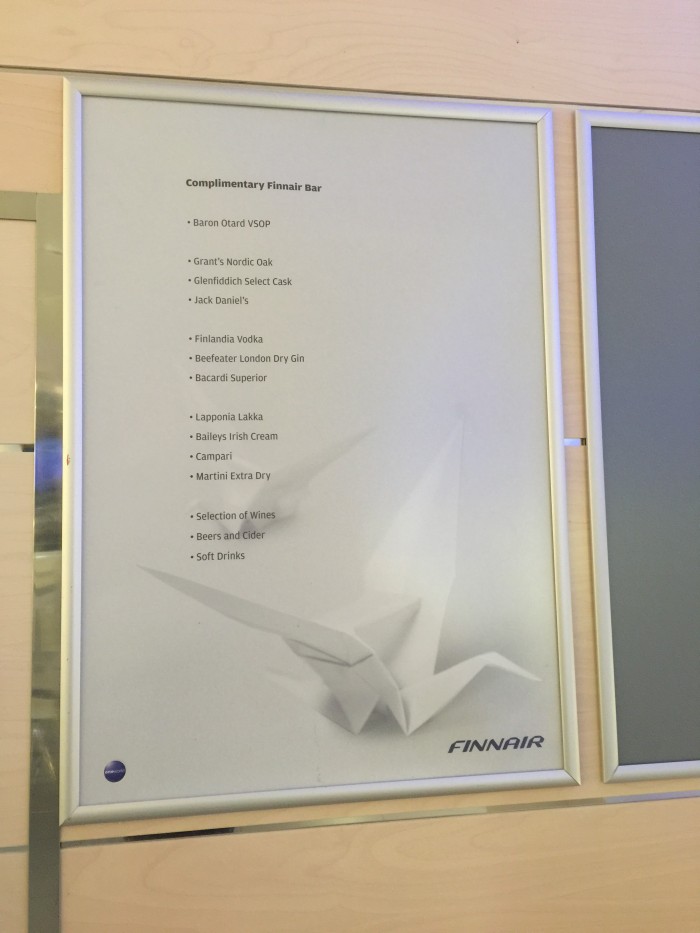 The Finnair lounge had hot food, including eggs, sausages, and oatmeal. It’s not the most amazing spread of food, but it’s fine. There were also usual standard cold breakfast items including meats and cheeses, cereal, fruit, and bread. 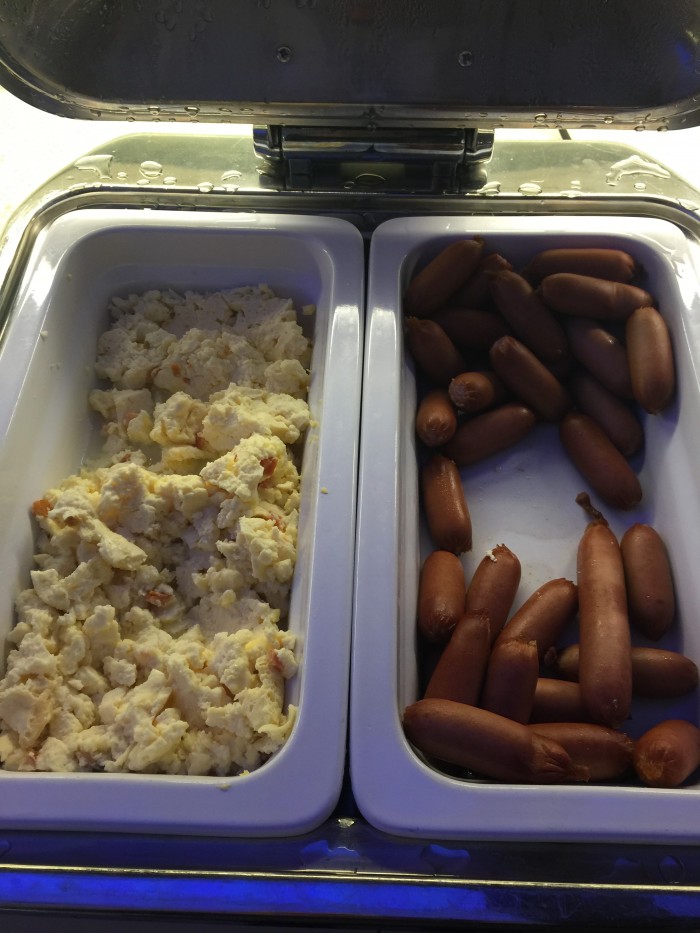 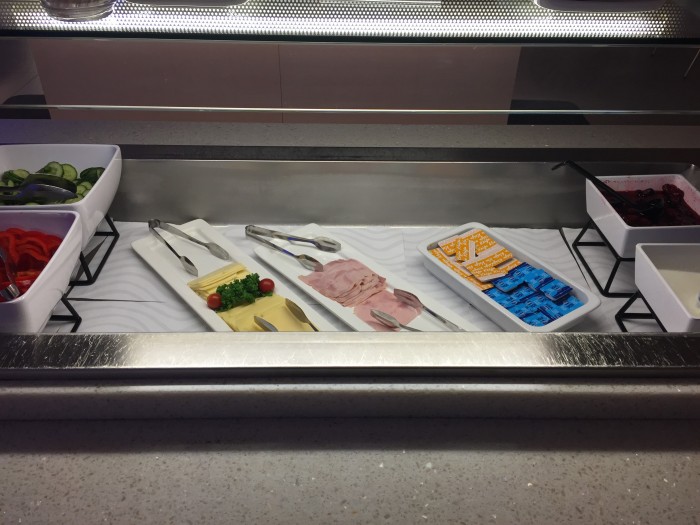 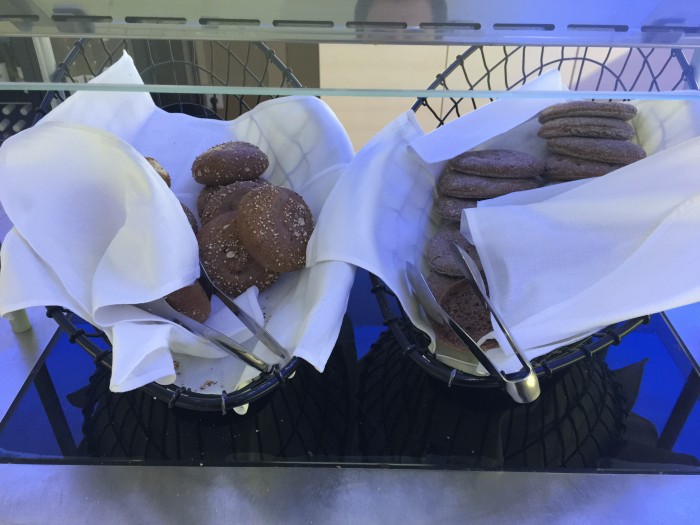 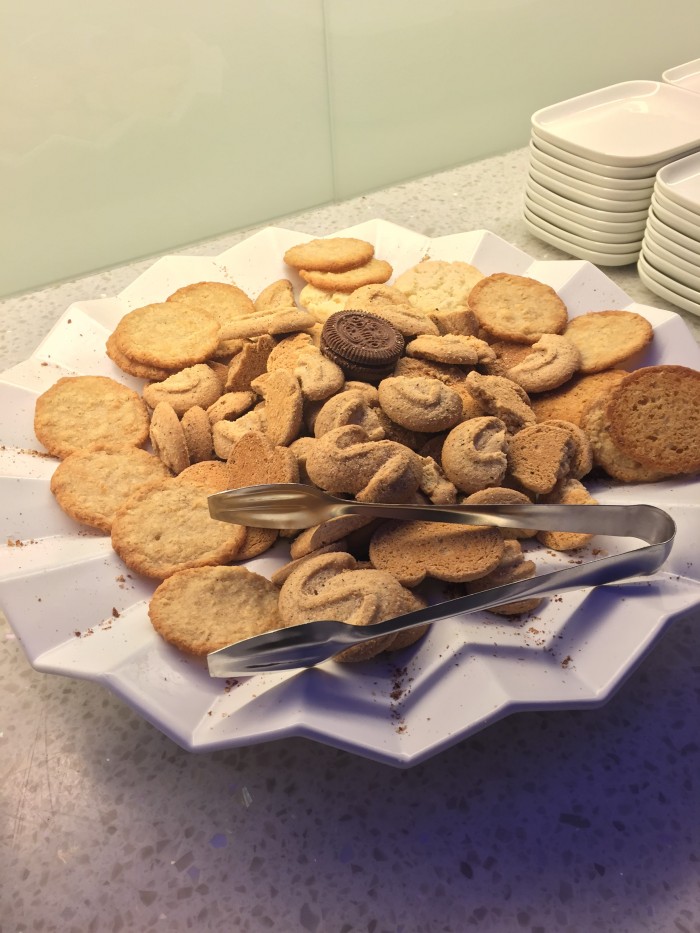 One of the nicest aspects of the lounge is that it’s so bright and airy. Or at least it’s bright when the sun is up. I don’t believe I’ve seen a lounge with such high ceilings & great light. I watched the sun begin to rise through the windows that overlook the runway. 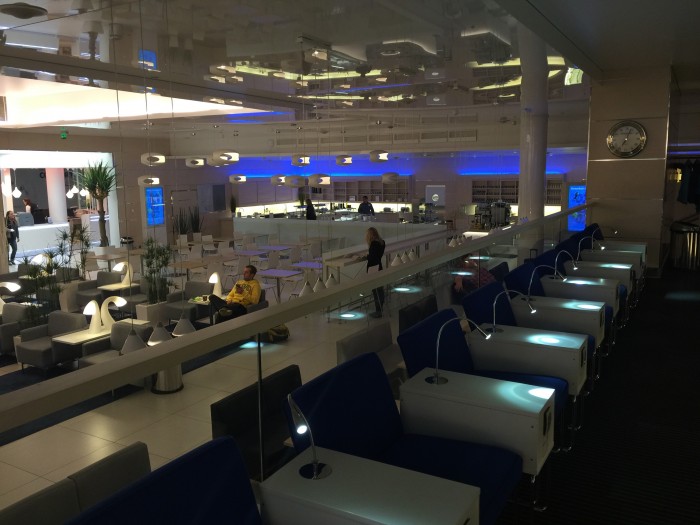 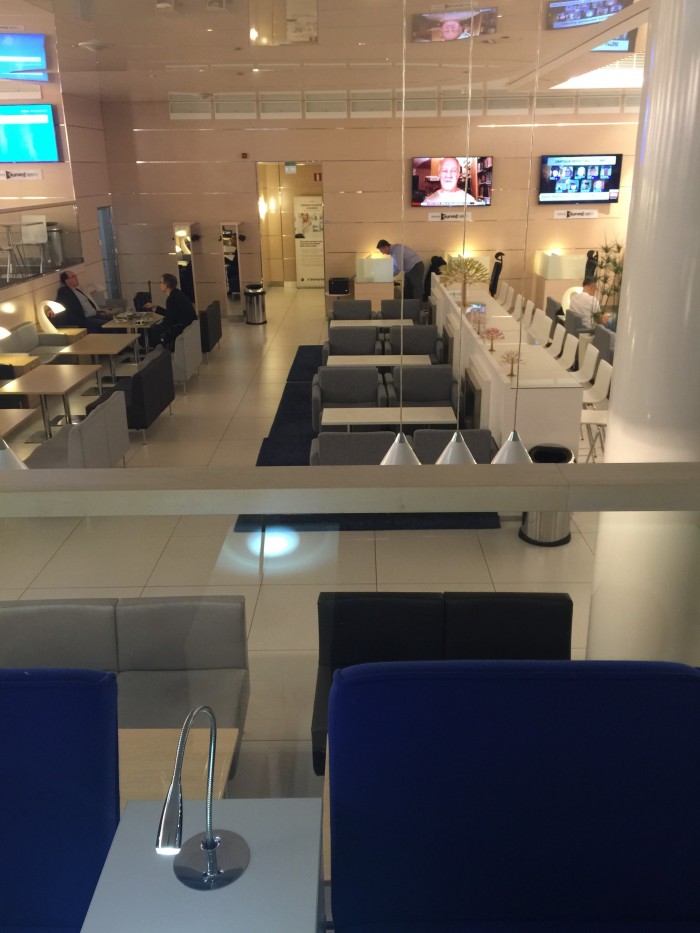 If you’re not content with the view out the large windows, the lounge also has fancy curved TVs, plus Apple business pods for those who need a computer. 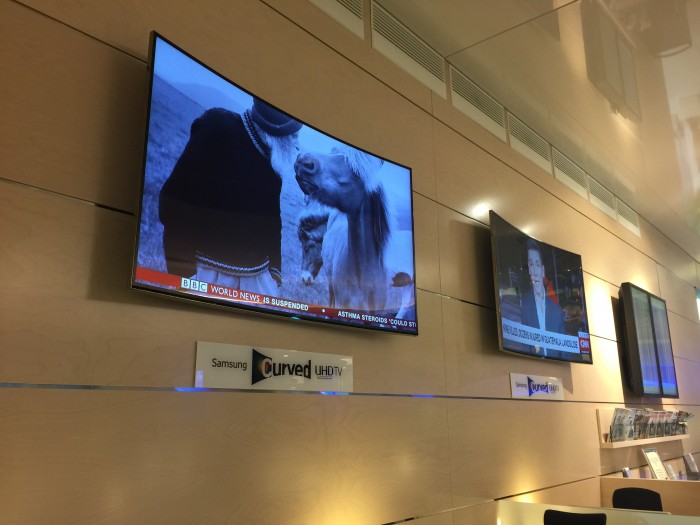 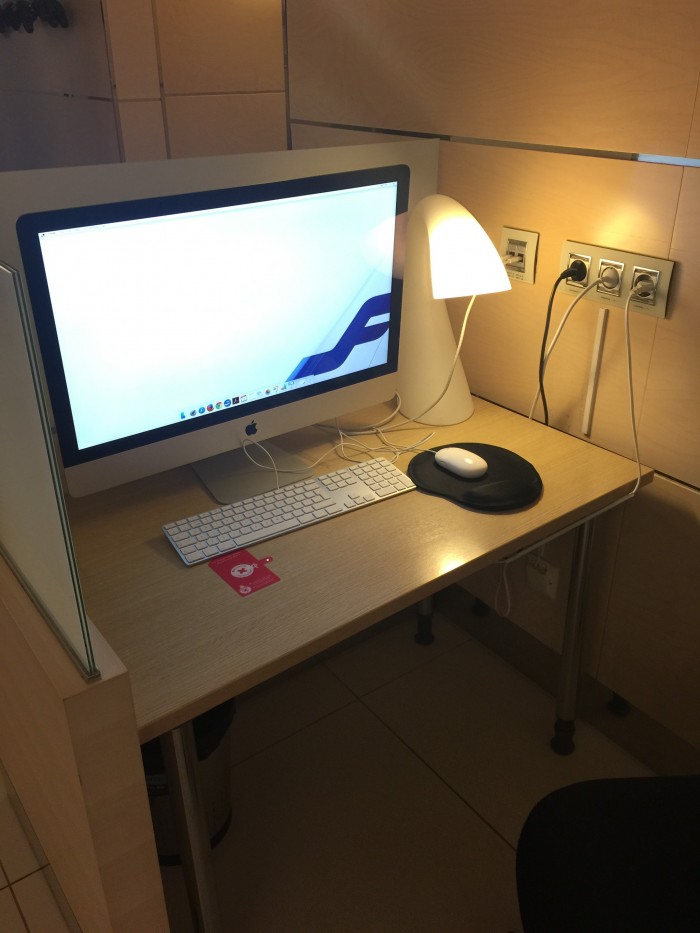 I only had about an hour in the Finnair business lounge before I left Helsinki, but it was a pleasant time. It might not be as luxurious as some airlines’ home lounges around the world, but I found it to be spacious, clean, and a positive contribution to my first Finnair experience.