Ostrava was the heart of the Czech Republic’s coal mining industry. As with many mining towns around the world, the mines have been closed in recent decades. This evolution is not easy. What does a city do when their heart no longer exists, when jobs are gone, and along with them, money? In the case of Ostrava, they are hoping that more of the many visitors to the country go beyond Prague to explore their region. The city hosted TBEX 2018, and as part of the travel blogger conference, Visit Ostrava offered tours of two local coal mines: Michal Mine & Landek Park. Each mine tour showed different aspects of the life of miners. These tours are open to the public. I had the opportunity to visit both Michal Mine & Landek Park, giving me a great opportunity to learn & explore the mining history of Ostrava.

The mines of Ostrava, Czech Republic

A visit to the Michal Mine in Ostrava

The first mine I visited in Ostrava was the Michal Mine. The mine is located a short bus ride east of the city. 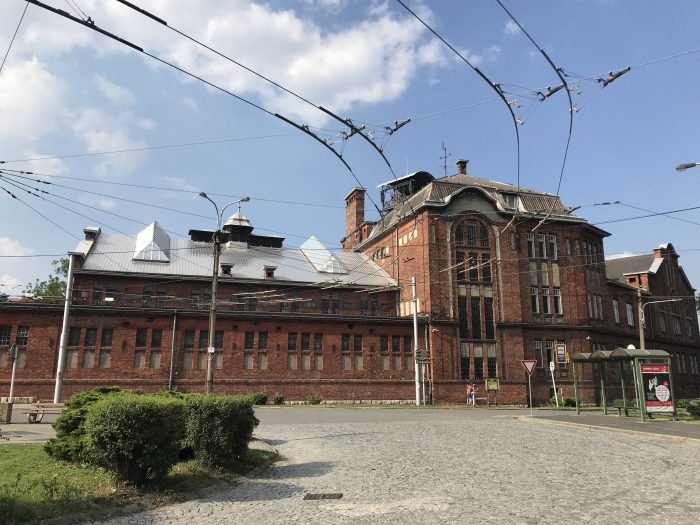 Our tour was conducted by Jiří, who not only was a tour guide, but who had actually worked in coal mines himself. When you’re on a tour, there’s nothing better than being shown around by someone who has lived the life & actually has stories from his time in the mines.

The tour of the Michal Mine does not actually go into the mine itself. It has long since been sealed over. This is fine, as the Landek Park experience covers that aspect of the mining industry. Instead, the support buildings for the Michal Mine have been preserved just as they were when it closed in the 1990s.

The Michal Mine first opened in 1842. Back then, horses were used to cart coal out of the earth. The region was home to over 35 mines, tapping into some 400 coal seams. Consider this area the West Virginia of Czechia. Over time, the Michal Mine eventually ventured some 671 meters below the surface before eventually closing in 1993. It was then declared a national monument in 1995.

To visit the Michal Mine is to go thorough the daily process of being a miner, without going into the mine itself. Most people are accustomed to having a job where you just show up, do your job, and then go home. Mining is much more complex than that.

Our first stop was in the former shop of the mine. Here was the check room, with tags for each miner. This was how miners could be kept track of. If your tags weren’t present in the room, that means you were in the mine. In all of these support rooms, old equipment could be seen. 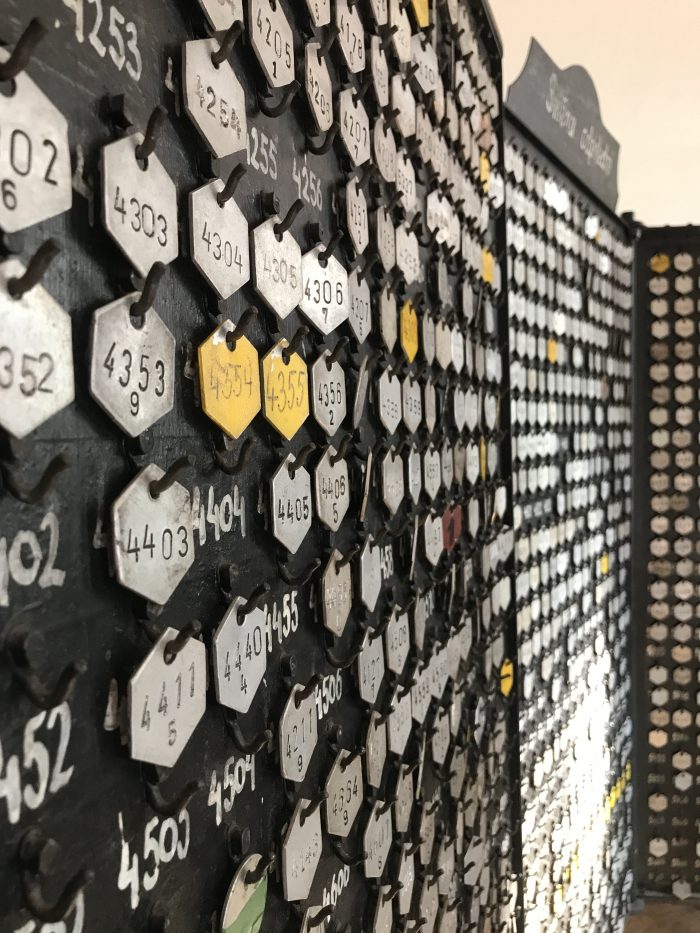 The next room at Michal Mine was the cloak room. As we entered, my immediate thought was that it was some sort of macabre modern art exhibit. Clothing was dangling from the ceiling on chains. It looked as if we had entered a mass hanging room. 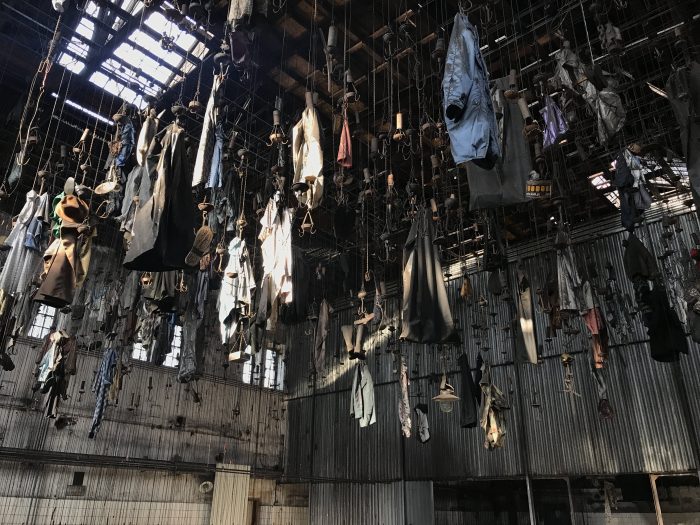 Instead, this room had a practical purpose. Miners would hang their civilian clothes on chains, then go get dressed into their work clothes. After working in the mines, the process would be repeated in reverse, with their sweaty mining clothes being hung to dry off overnight.

The next room we visited was the medical room. This was a vital area of the complex, as mining is dangerous work. Injuries were constant in the mines, as was death. Lists of fatal incidents were stuck to the wall as grim reminders of what had happened below us throughout the years. In one mining accident in 1894, 235 men were killed. When you’re presented with information like this, it’s difficult to not feel the enormity of the mine. Suddenly, you realize this is a very real place. It’s facts like this that make you glad that there’s now a bar & restaurant with beer on site.

Mining requires a lot of planning & monitoring. There was an entire room devoted to surveying. Here, there were maps of the mine, along with all of the equipment that was needed for drafting. One mistake and the mine could collapse. 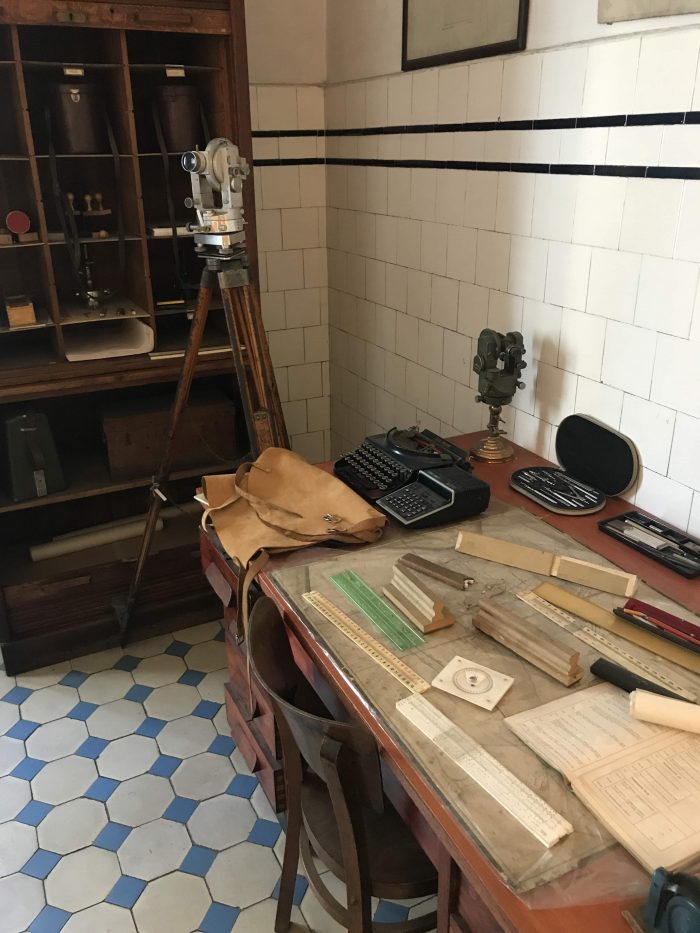 While miners worked below, there were managers who worked in the operations room, making sure all of the necessary systems worked properly. Should something go wrong, there were monitors & phones for communication. It was from here that ventilation systems were operated, and records were kept. This was the most modern room of the Michal Mine complex, though thanks to having closed in 1993, everything still had a certain dated quality to it. 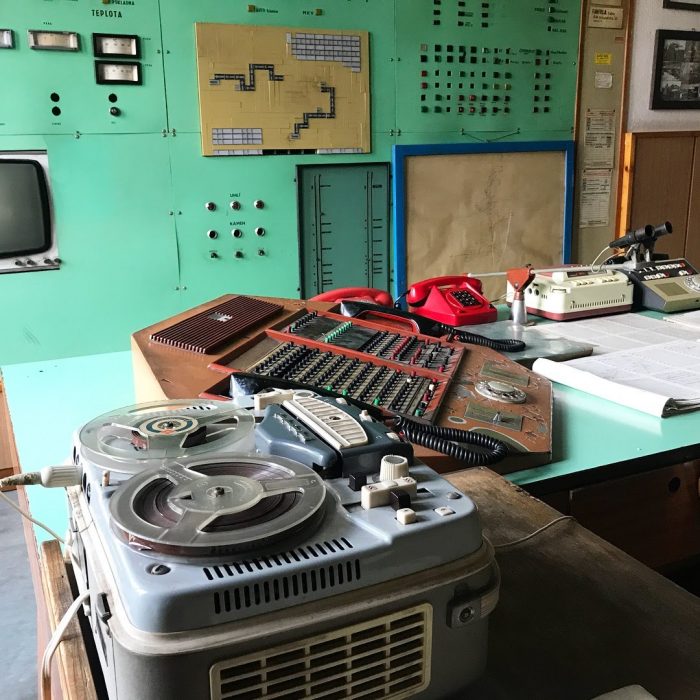 After walking through the process of what goes on behind the scenes of mining, it was time for a break. We were given a sack lunch with a sandwich the miners would have eaten (hope you like onions!), along with a drink. The drink was called the Miner’s Flag, and it consisted of fernet & green menthol. I think we were expected to find it gross, but I actually enjoyed it. 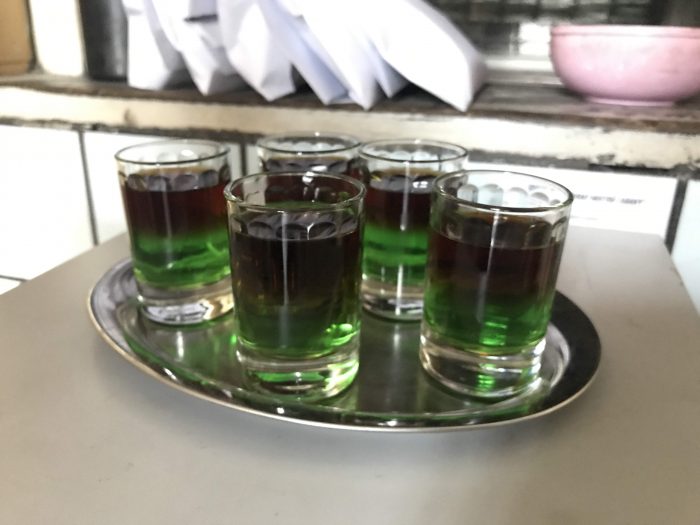 By this point, we were in the upper levels of the Michal Mine support building. Here was the entrance to the bridge that crossed over to the elevator shaft & tower. Before we headed that way, we passed the lamp room which also housed rescue respirators. Another reminder of all of the heavy equipment that was used to make sure the miners were kept as safe as possible. 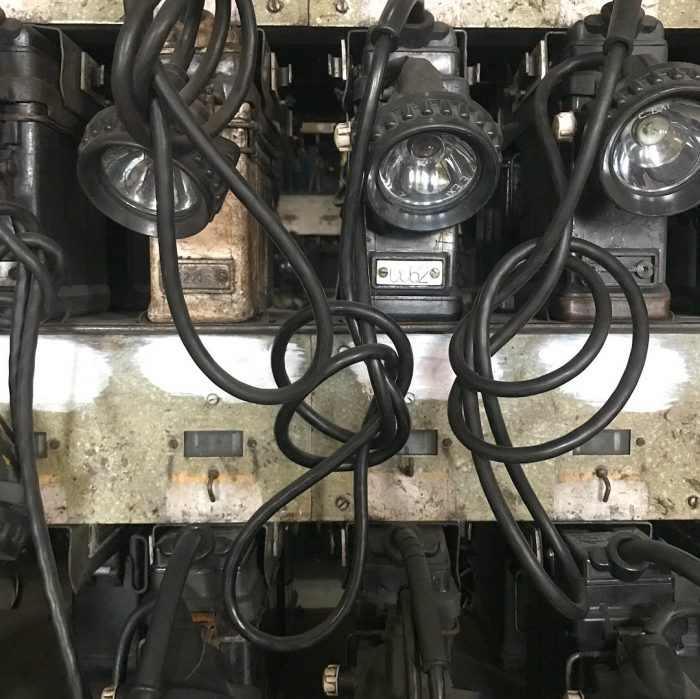 Finally, we were in the elevator shaft building. We descended through each level, eventually reaching a rail car room where the coal was transported out of the mine. 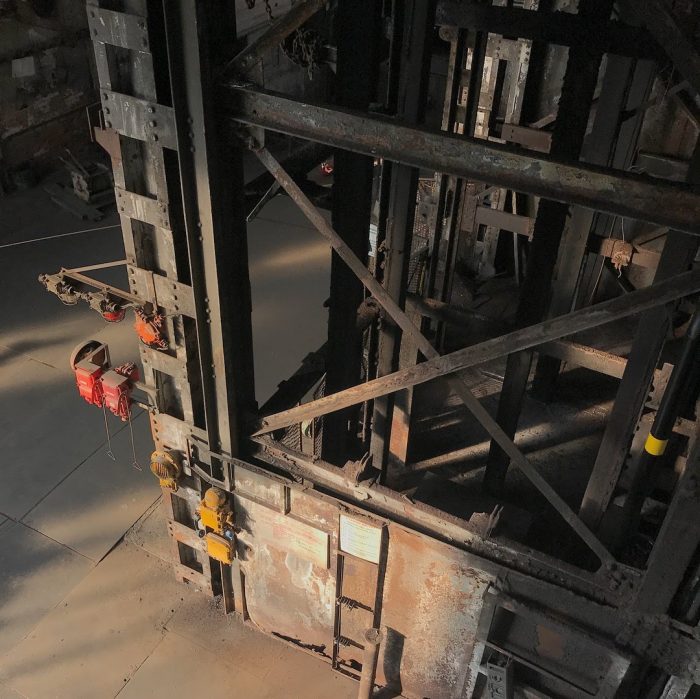 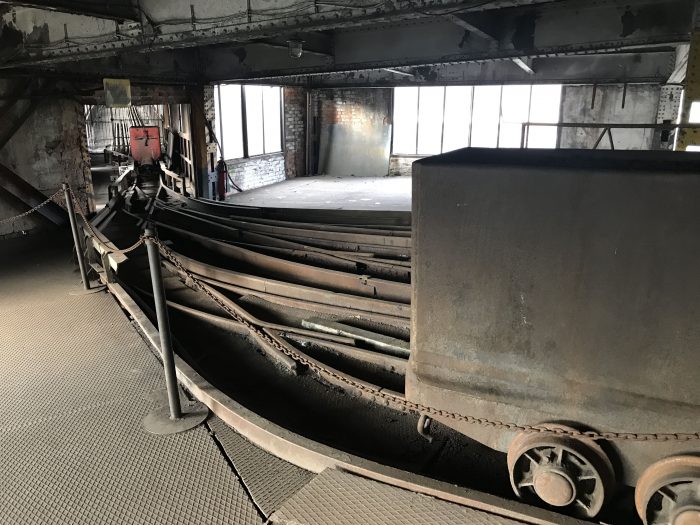 While the tour felt massive, it’s only once you’re back outside that you realize you’ve only seen a small portion of the buildings above the Michal Mine. What’s beneath the earth is even more massive, of course. 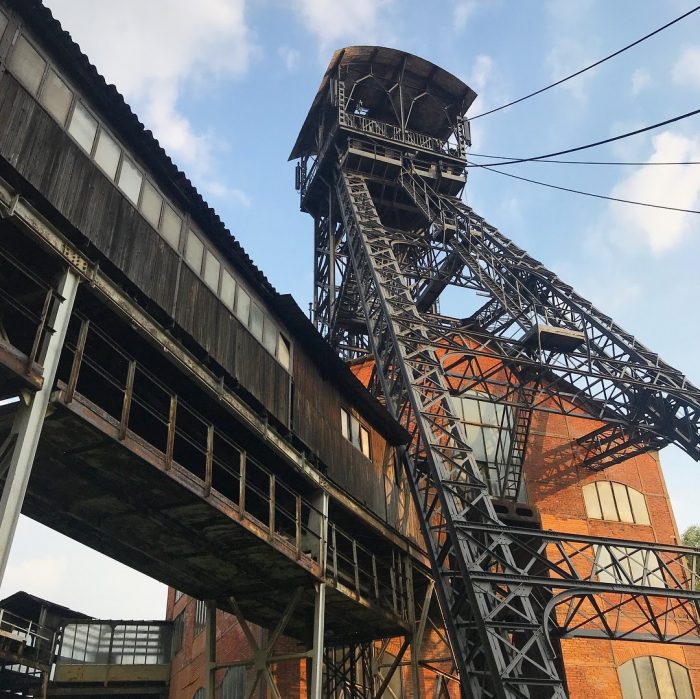 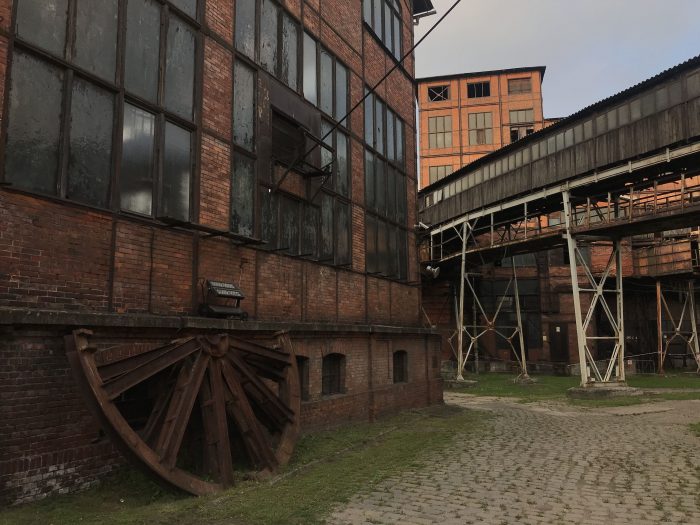 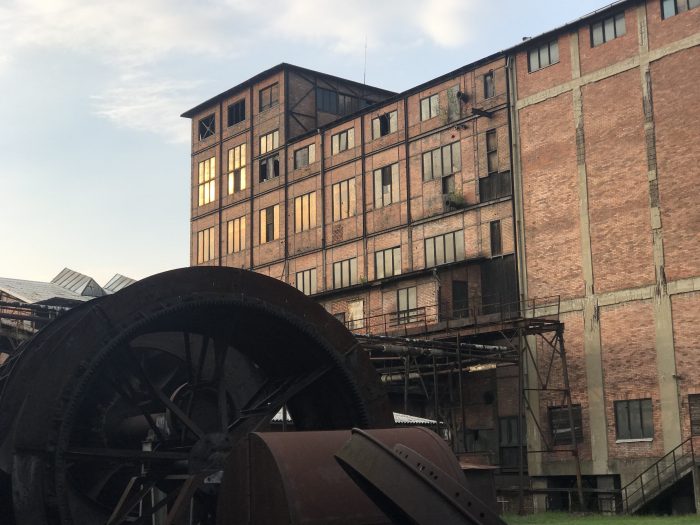 We still had a couple of other buildings to visit. These buildings housed the giant steam engines that powered mining equipment such as the elevator. One of the buildings housed a working engine from 1893, which was cool to see in operation. 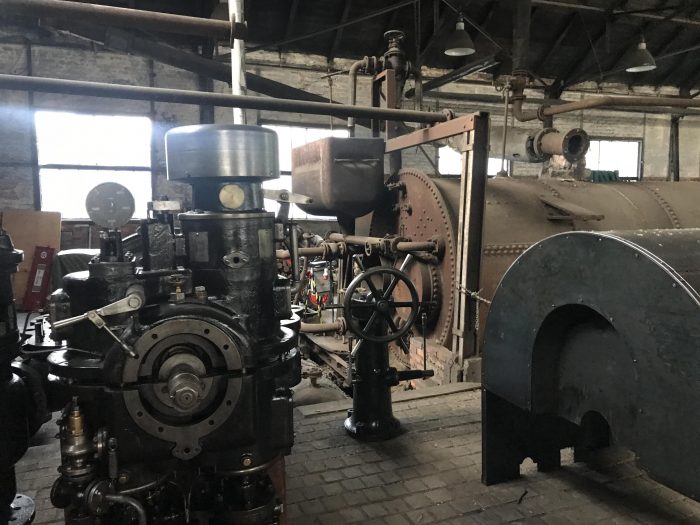 Some people would think that a mine tour that doesn’t actually include going into the mine would be boring, but I found my visit to the Michal Mine in Ostrava to be quite interesting. It tells in detail the history of what it was like to work in an industry that was vital to this area. To get the rest of the picture, it was then time to go to Landek Park.

A visit to Landek Park in Ostrava

Landek Park is the largest mining museum in the Czech Republic. Like the Michal Mine, it’s also easily accessed by bus from Ostrava, as it’s just to the north of the city. 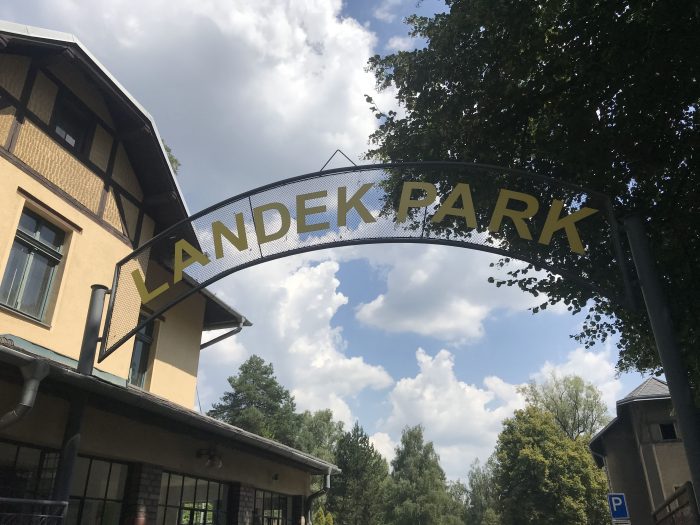 The coal mine at Landek Park opened in the 1830s, with the main shaft being dug in 1837. Over the ensuing 150 or so years, the mine reached a maximum depth of 622 meters. 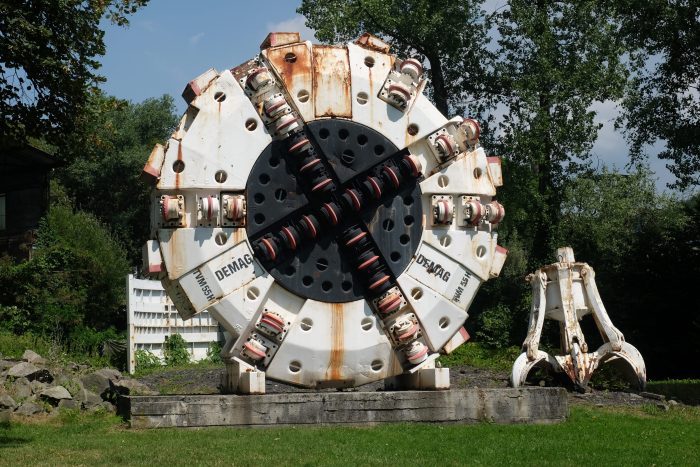 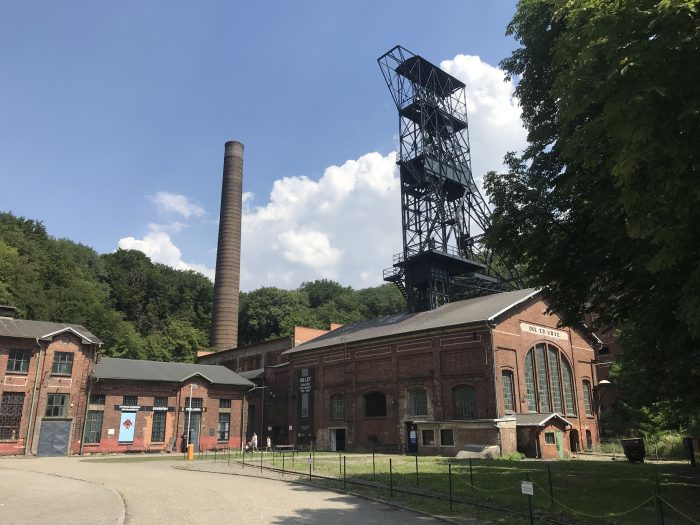 Our tour guide, Daniel, took us down the elevator into the mine. The tour does not go anywhere near the full depth of the mine, but you still get a sense for what it was like below the surface. This is not a tour for the claustrophobic, though at no point were we in particularly tight spaces. There was one section where the ceiling was on the low side, which reminded me of the DMZ tour I took in South Korea. We were given hard hats so we didn’t crack our heads open. 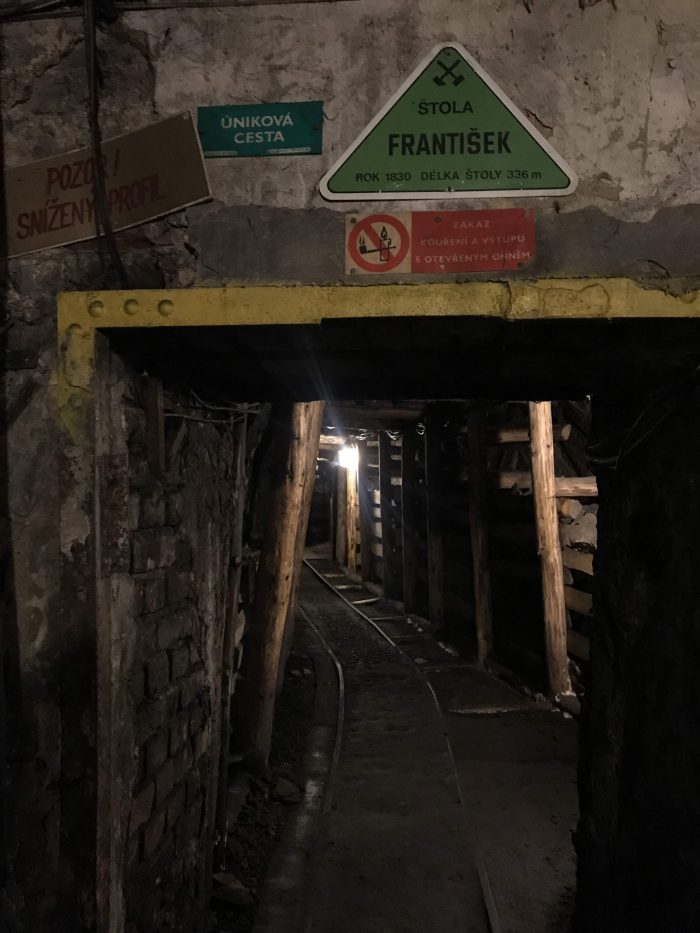 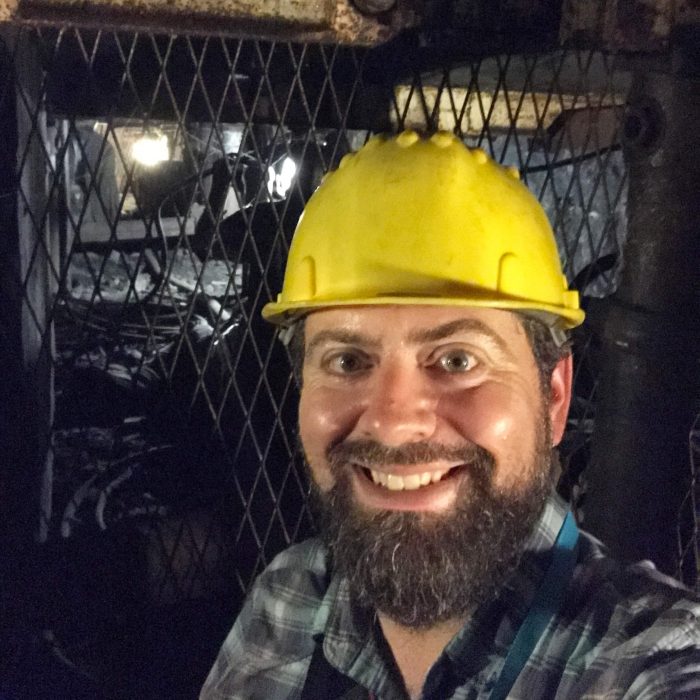 Daniel took us through the mining process, at times demonstrating equipment that was used to take coal out of the ground. Some of it was actually still operational.  We also learned more of the history of the mine. During World War II, it was used as an air raid shelter. 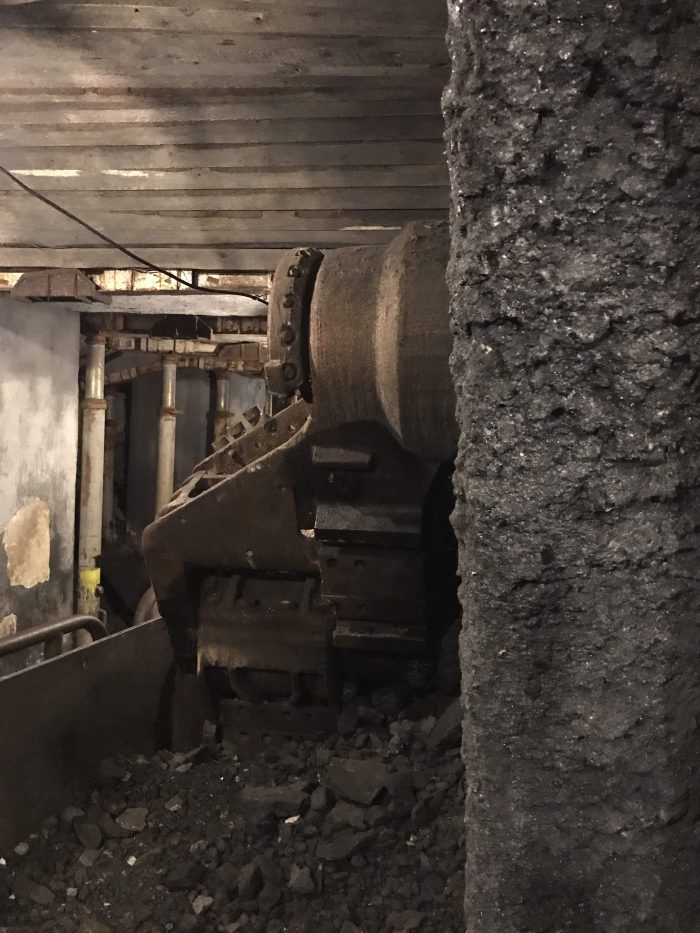 Would you want to use this toilet? It doesn’t look like a pleasant experience. Just another way that the life of a miner was difficult. 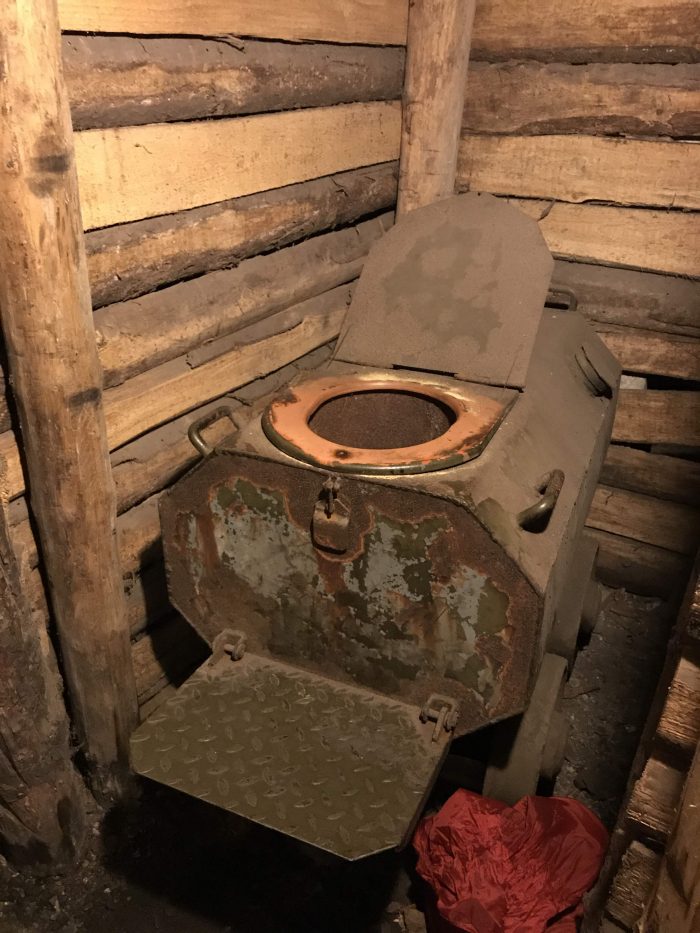 After exploring the tunnels of the Landek Park coal mine, it was time to take the elevator back to the surface. 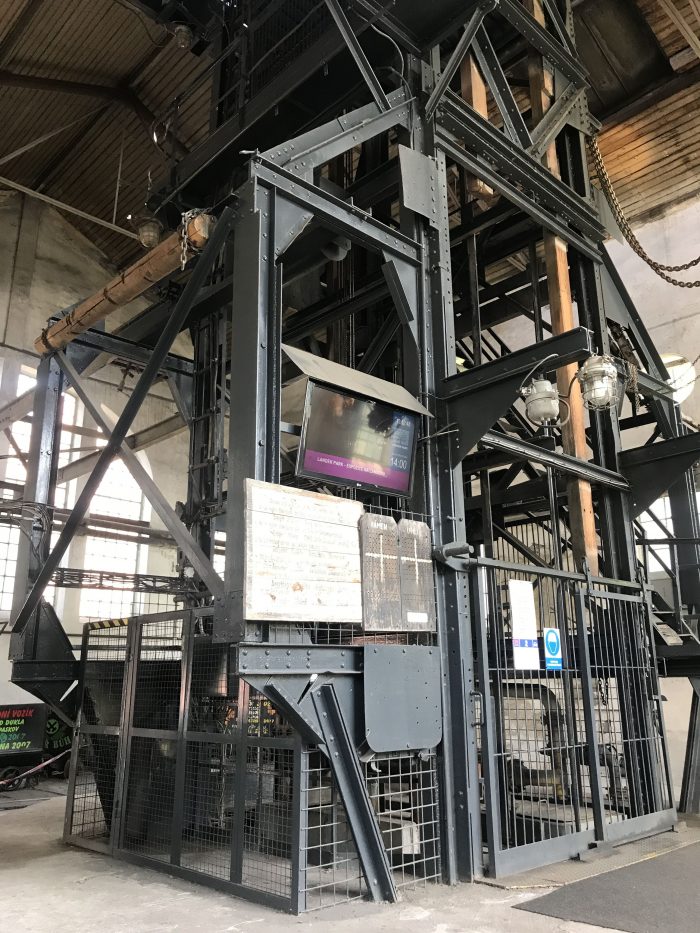 Our next stop was the Museum of Rescue Equipment. The building is dedicated to rescuers who died attempting to save miners. As you go through the exhibits, once again you realize just how dangerous work this was, and how important it was to have this equipment ready for action. 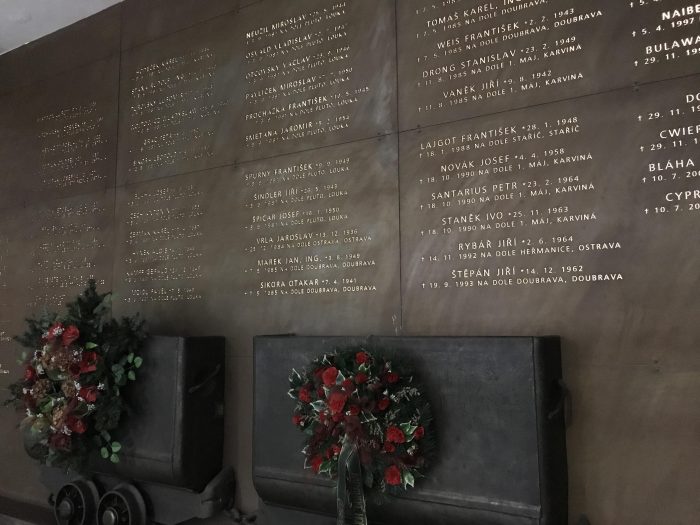 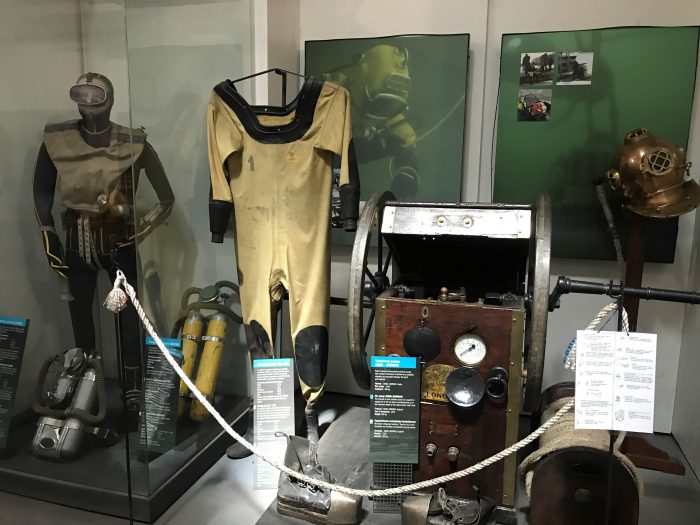 There was a massive fire extinguisher, which was the size of a jet engine. The goal of the machine would be to deny oxygen to any fire that broke out underground. We also watched a video of rescues while in an example of a rescue room where such missions would be launched. 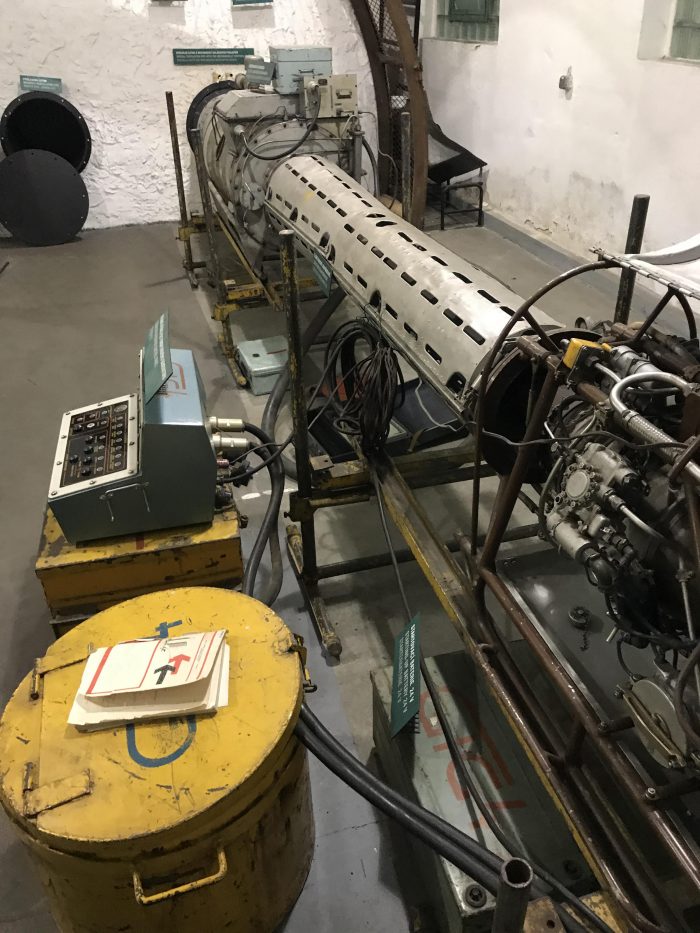 One of the more fun aspects of the visit to the Museum of Rescue Equipment at Landek Park was the training chamber room. Here, you could practice moving through tight quarters in darkness, just as rescuers might have to do in the case of a mine collapse. 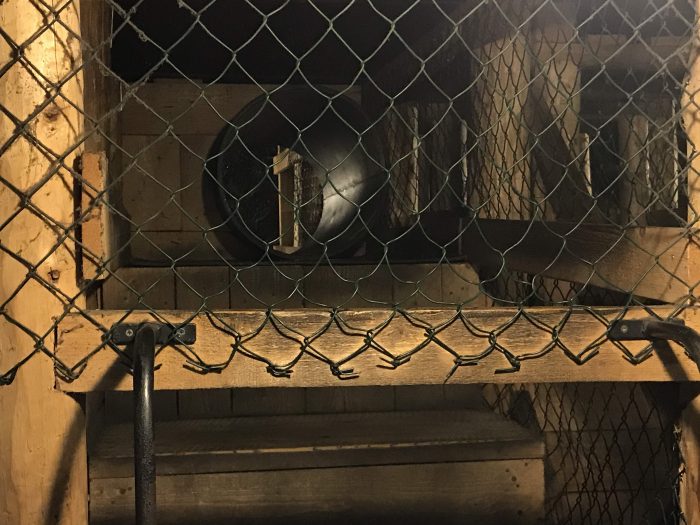 Finally, we had sandwiches & another Miner’s Flag at the on-site restaurant. 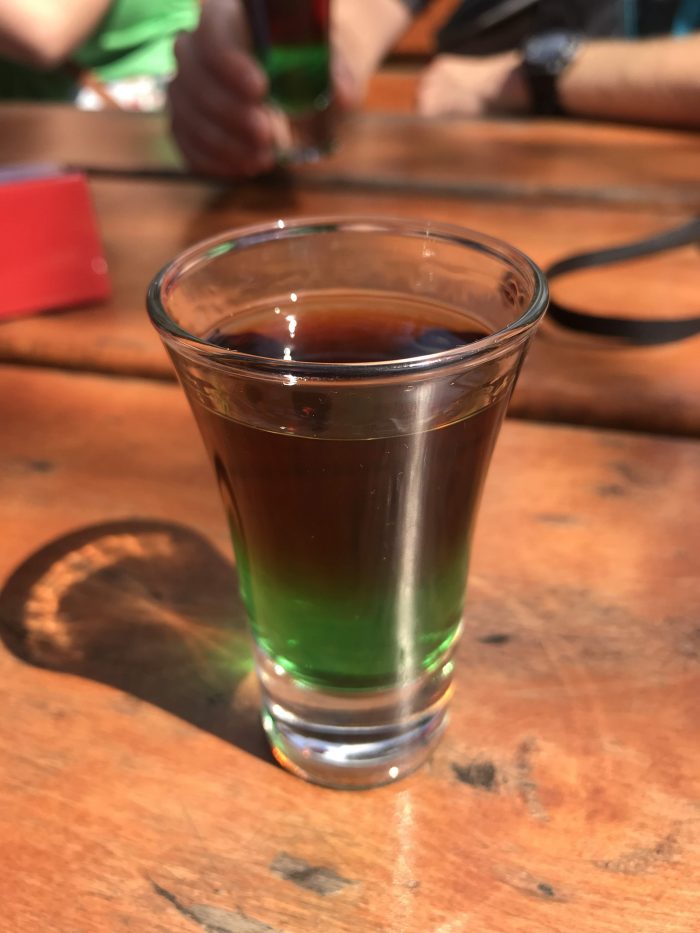 The mines of Ostrava are an important part of Czech history. By visiting both the Michal Mine & Landek Park, you can get a fuller picture of what life was like for the miners. Each site covers unique aspects of the job, from above surface preparation to below ground work to what would happen if something went wrong. Coal mining powered the economy around Ostrava for centuries. Nowadays, in a sense it still does for visitors who are interested in this industrial history.

Disclosure: I visited Michal Mine & Landek Park on free tours as part of TBEX Ostrava. All thoughts are 100% my own. 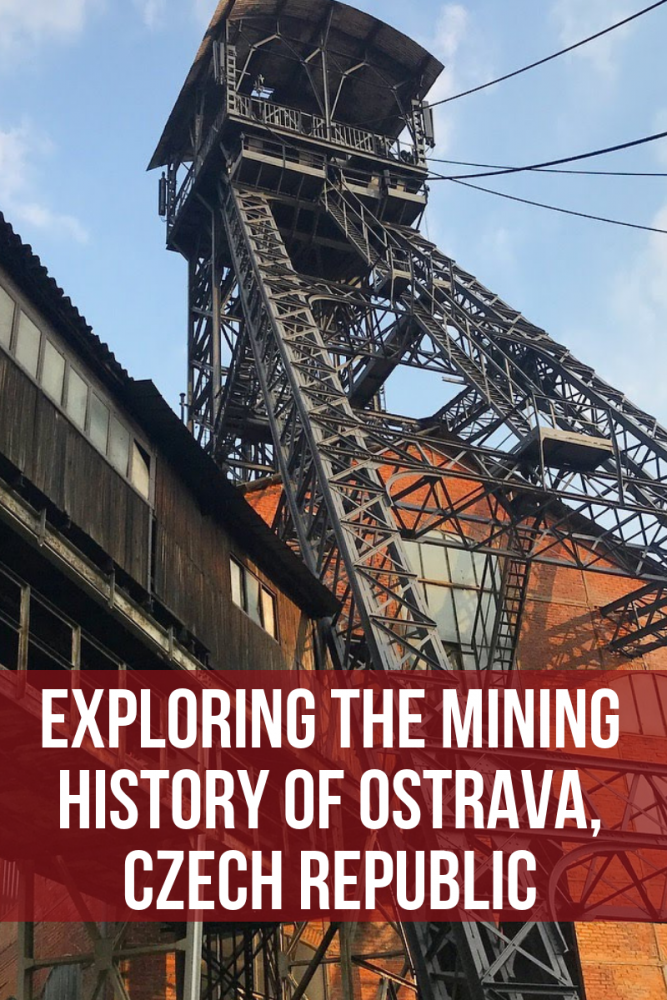