As you walk around Valencia, it’s impossible not to notice just how many orange trees line the streets of the city. If you visit during the winter months, you’ll find the trees are filled with oranges. Given that they’re an iconic symbol of the city & vital to the economy of the Valencian Community, it’s not surprising that oranges have been incorporated into local cocktails. No visit to Valencia is complete without drinking Agua de Valencia, and there’s no better bar to try it at than Café de las Horas. 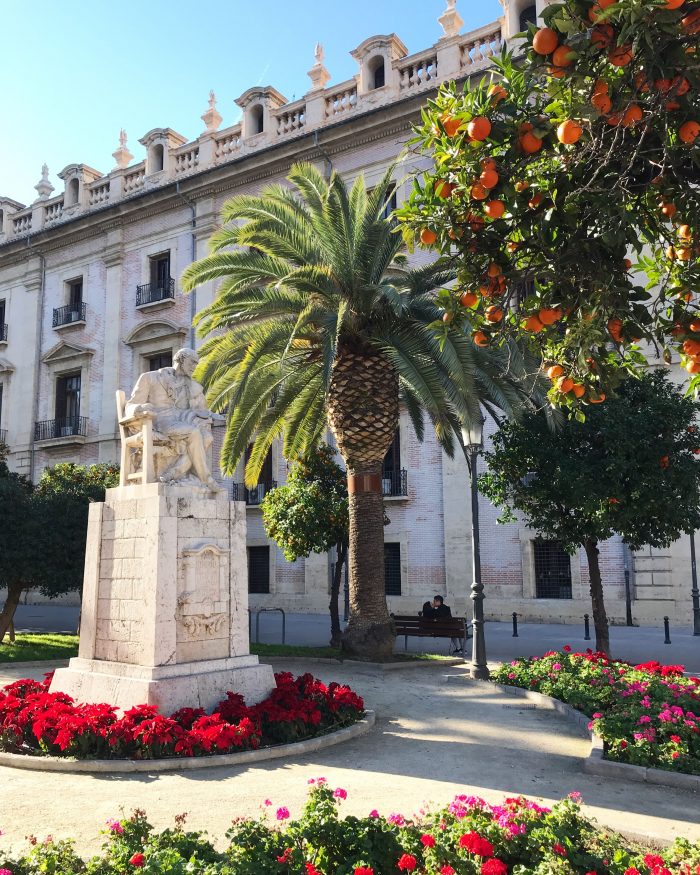 The guide to Agua de Valencia

Valencia oranges are a well-known orange, but Valencia oranges aren’t actually from Valencia, they were created in Southern California and named for Valencia. However, that doesn’t mean that Valencia oranges haven’t found their way to Valencia, as they’re one of several orange varieties now grown in the region. Juicing machines can be found in shops all around Valencia. I even encountered a juicer making fresh orange juice in a museum. There’s nothing better than freshly squeezed local juice during orange season in Valencia. Well, maybe if it has some alcohol in it.

Orange you glad to see more of sunny Valencia?

The history of Agua de Valencia

That brings us to the history of the cocktail. Agua de Valencia (Water of Valencia) is a drink made from cava or champagne, vodka, gin, some secret ingredients perhaps, and of course, orange juice. The drink was first created by a man named Constante Gil at Café Madrid de Valencia in 1959. Legend has it that the drink was created for a group of travelers who kept requesting “Agua de Bilbao”, which was cava. The drinkers challenged Gil to create something different than the cava they had been drinking, and thus, Agua de Valencia was born. 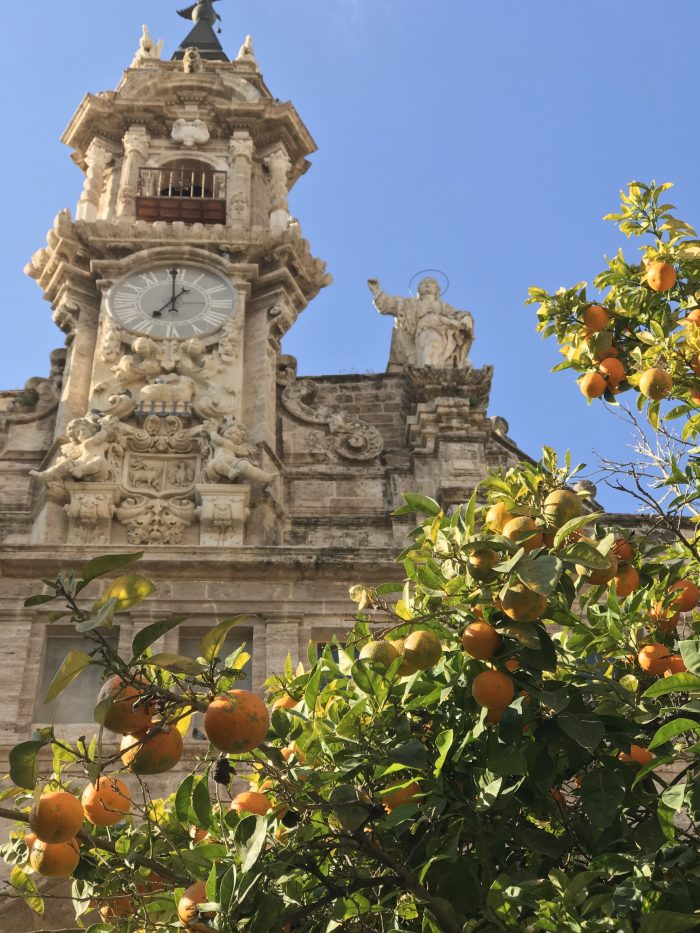 You can find Agua de Valencia all over the city. The original Café Madrid in Valencia was closed for a long time, but it has now reopened as a bit more of a boutique establishment. According to many, the best Agua de Valencia in Valencia can be found at Café de las Horas (official site), which is located in the center of the old city. 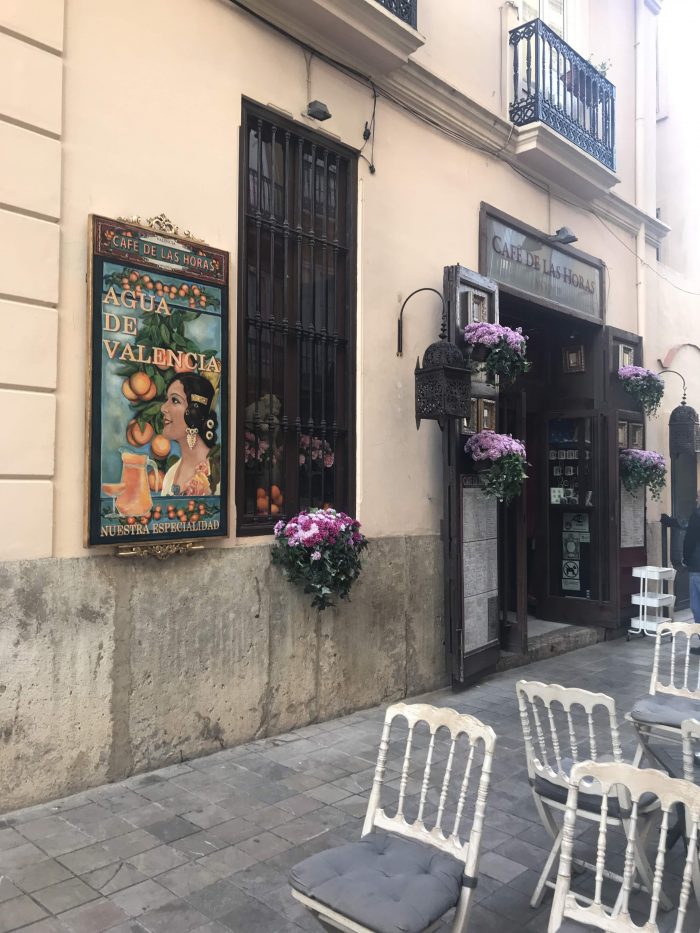 Before you’ve even entered Café de las Horas, there’s a clear sign that you’re at a good bar for Agua de Valencia. 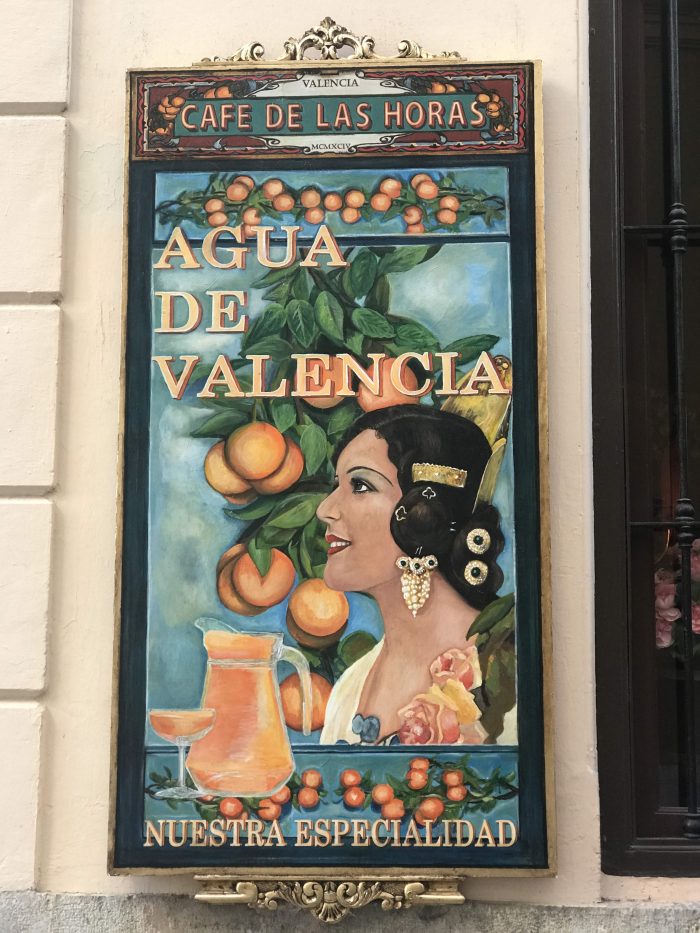 Inside, you’ll find an ornate bohemian café that feels like it’s dropped into Valencia from a bygone era. Even if you’re not looking for a cocktail, Café de las Horas is still a nice place to drop in for a coffee or tea. 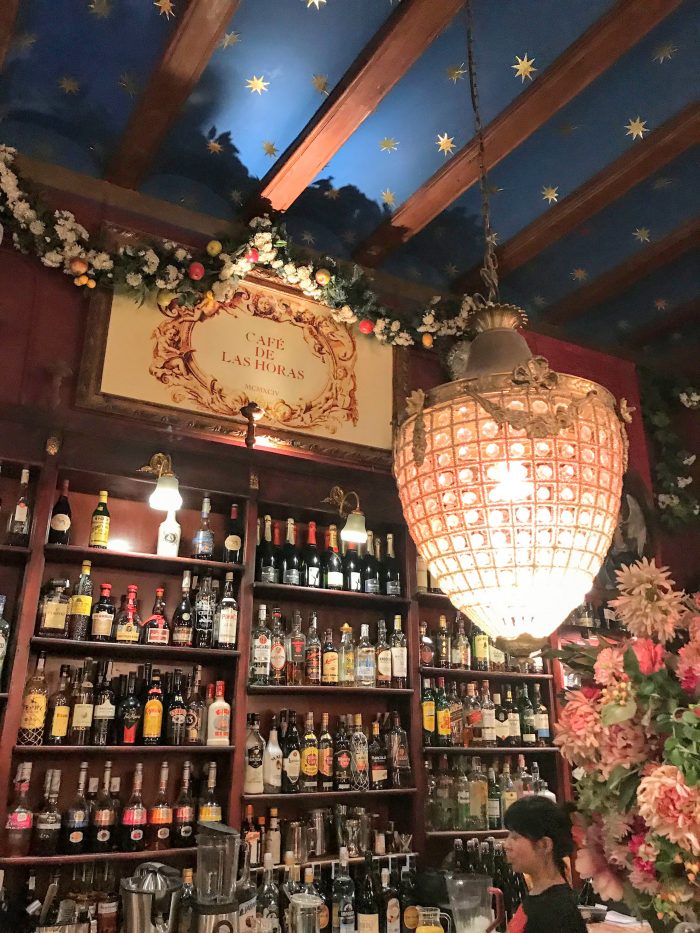 The Agua de Valencia at Café de las Horas is served in a pitcher that’s described as being for 2/4/6/8 people & is priced accordingly. However, as a solo traveler, I had no problems finishing off a small 2 person pitcher.

I had imagined that the drink would be just like a mimosa, but it was so much better than that. The Café de las Horas Agua de Valencia was blended so well that it was frothy & thick, almost like a boozy smoothie. 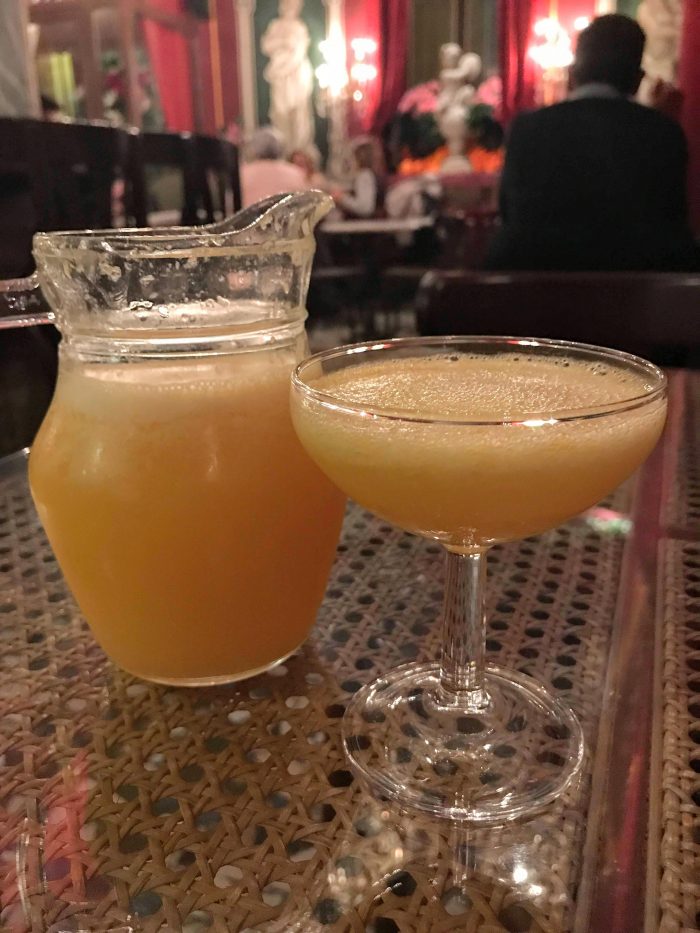 The fantastic fresh local orange juice that I had been enjoying for days on its own was perfect in the cocktail as well. Given how good the local fresh OJ was & the overall ambiance of drinking an Agua de Valencia in the city where it was created, you might be hard-pressed to completely replicate it, but you can get pretty close.

Each local bar has their own closely-guarded recipe for Agua de Valencia, but the gist of the drink is as follows:

So to make a 1 liter pitcher of Agua de Valencia, you can use:

Mix the orange juice, cava or sparkling wine, gin, & vodka to your liking. This isn’t rocket science. Depending on the quality of the orange juice you have & your personal preferences, you may want to add a couple of tablespoons of sugar, to taste. You can start with smaller measures of all of the above ingredients in the above ratio & see what works for you before you make an entire pitcher, as some people may want to use less orange juice & more cava. The cocktail is not normally served with ice, so chill all of your Agua de Valencia ingredients beforehand. The Agua de Valencia at Café de las Horas was not served with an orange garnish, but it would not be an unwelcome addition. Go ahead, enjoy life.

If you’re visiting Valencia & looking for a food & drink tour, here are some options:

Have you had Agua de Valencia before? What did you think of it?