One of the goals of this trip was to get to all of the tiny European countries that I had missed on previous trips. The first on the list was the tiny, incredibly rich, Principality of Monaco. 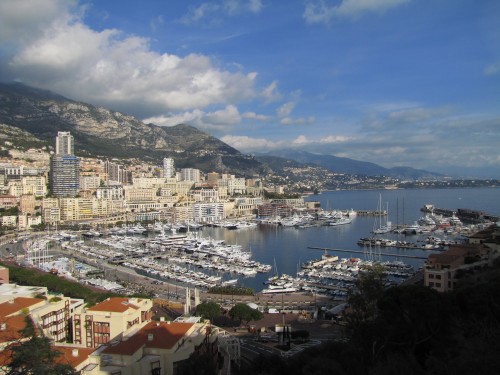 I had originally intended to get off at the train stop before Monaco, Cap d’Ail, and then walk along the coast. Unfortunately, I forgot about this plan until the train had left the station and passed a guy who was walking along the coastal path. Someone should go back there and let me know how that walk is. Supposedly, it’s nice.

Monaco is everything you would expect it to be. There’s clearly a lot of money there. Everything is clean and new. I felt like I was going to be thrown out at any moment once they figured out I didn’t have enough money to be hanging out. Luckily, that wasn’t the case. The weather was sunny, and it ended up being a nice day out for the most part.

From the train station, I walked around the upper parts of the city, then headed toward the hill that houses the Prince’s Palace of Monaco. Once I got to the old city, I was hungry, so I stopped at a place that had a nice outdoor patio, Fredy’s International.

Before I could be seated, I got to experience the sort of attitude I assume one gets from living in a tax haven. There weren’t many open tables, but there was a set of tables for 2 that were pushed together, with two men sitting at one of them. They had their jackets on the two chairs of the other table. The host asked them to move their precious jackets so he could seat me at that table and they refused. Eventually he seated me at another table that had just opened up but needed to be cleaned. I hope their meal gave them diarrhea.

On the bright side, by sitting at the other table, and because the two men still refused to let the staff seat anyone else at the table next to them, I ended up sharing my table with a friendly woman from New York who had been living in France for 25 years. She was a sculptor as well as an art teacher at a school in Monaco. It seems like everywhere I go, I meet at least one nice New Yorker, thus proving that we are the best people on the planet.

I had a fantastic crab, shrimp and avocado salad to start, which was the first time I’d had any vegetables in a few days, followed by seafood pasta. Then it was time to head back down the hill to explore the rest of Monaco.

Monaco is best known in some circles for the annual Monaco Grand Prix Formula 1 race. The course runs through the heart of Monaco, circling the harbor and the casino areas. It’s not difficult to follow the route if you have a rough idea of where it runs. Just look for the red and white curbs on street corners. Here’s a site that gives a bit more detail of how to find the track. Before the day was over, I would end up walking almost all of the course, including the famous tunnel. The route was filled with people driving expensive cars, many of whom were clearly circling with the intent of driving the course. I was almost tempted to find a car to rent myself, but I realized driving the track in a Ford Focus would not be nearly as fun as a Ferrari. 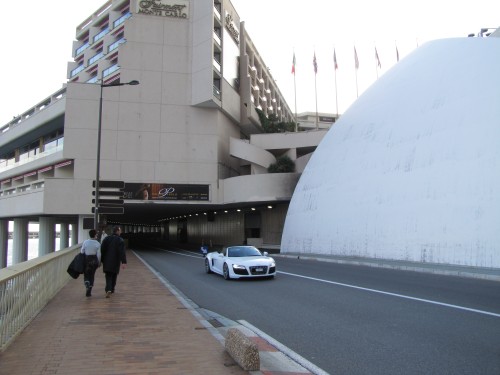 Eventually I ended up at the famous Monte Carlo Casino, which sits up a hill in, you guessed it, the Monte Carlo area of Monaco. My understanding of the casino’s rules was that they would never let me even go in to clean the toilets, never mind gamble. I decided I would try walking in anyway, preparing myself to be beaten mercilessly by guards. I walked in the door, and got stopped by two men. Instead of throwing me out though, they just told me I needed to check my bag at the coat check. Well then.

Not only did I get to go in, they have machines and tables set up just inside the entrance. They do have more formal gaming rooms, where I assume James Bond & Archer play against supervillains, but anyone can play on the main floor. I figured I’d probably only get one chance to play blackjack in Monte Carlo, so I did. I would like to say that the reason why I haven’t posted any more updates from this trip in a long time is because I have been figuring out how to spend the millions of dollars Euros I won, but that was most definitely not the case. I managed to make my money last for a little while, but of course lost in the end. 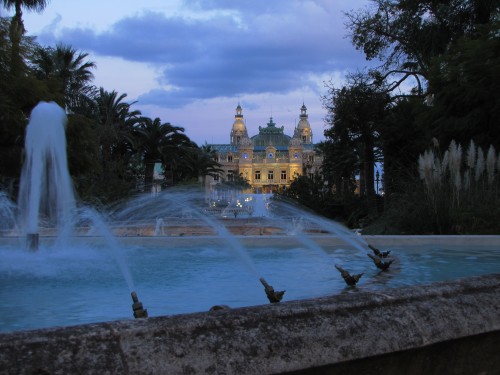 At this point, the sun was setting, so I took some photos, then headed for the train station to go back to Nice for the night. 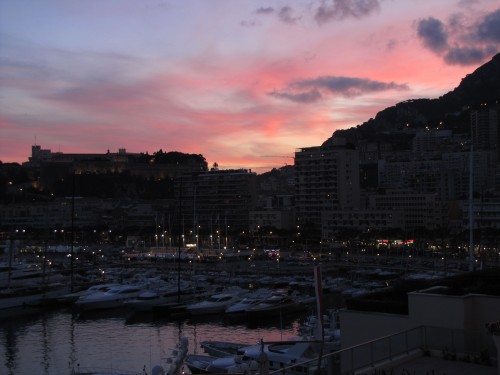 Song of the Day: The Arcade Fire Keep the Car Running