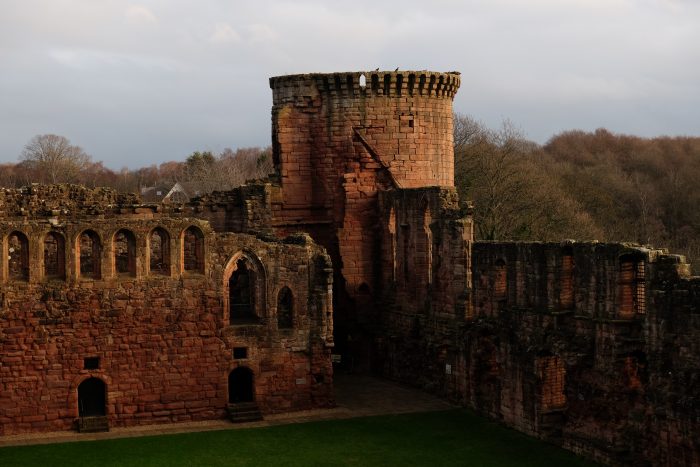 Bothwell Castle is located near Uddingston, a smaller town centre outside Glasgow. A cheap day return train ticket from Glasgow Central Station to Uddingston is just £3.80. The journey takes just 13 minutes if you are on a train bound for Edinburgh, and only a little bit longer if it’s a local train. 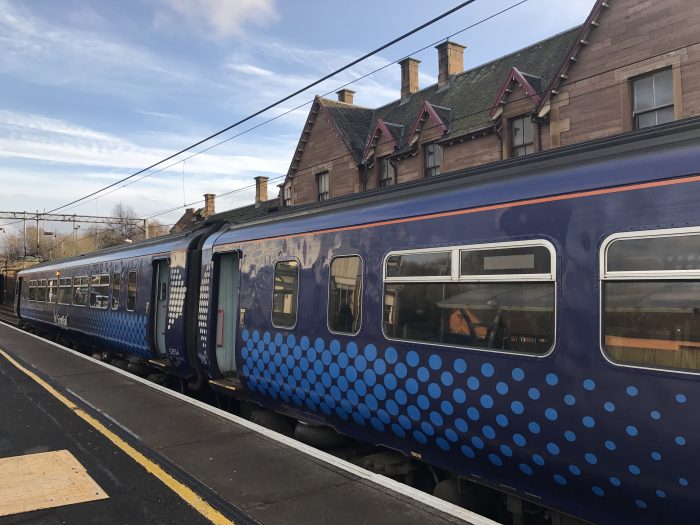 The centre of Uddingston has a main street filled with shops, restaurants, & pubs. As you walk through the town centre, turn at Bellshill Road, which becomes Castle Avenue just a couple of seconds later.

The city quickly gives way to suburbs, then to parks & fields. You can continue to follow the road, or there is a shortcut through a park. I followed the road since the other path looked muddy. The walk to Bothwell Castle takes about 25 minutes each way longer than the train ride itself. Glasgow is a large, busy city, so it’s remarkable that you are in the countryside within minutes by train. 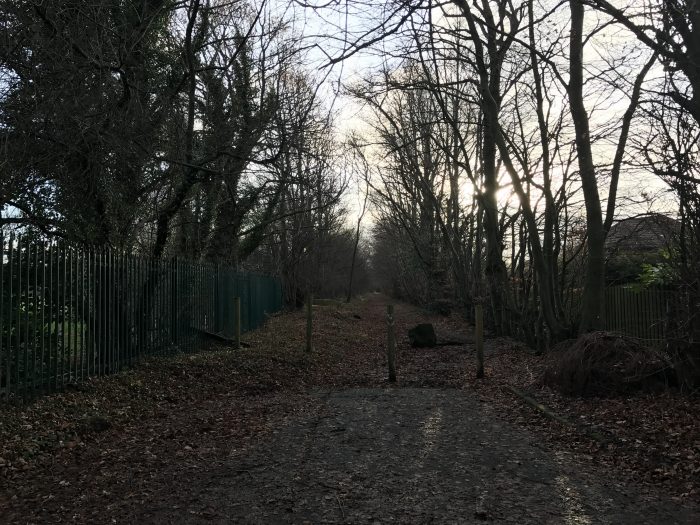 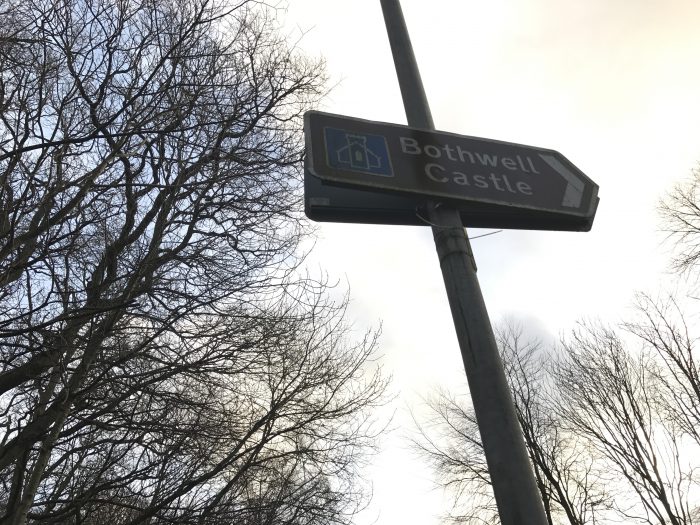 Bothwell Castle is just off Castle Road. Cross the road at the sign to the castle, then head down the street into the car park. Entry to the castle is £4.50. There is a small gift shop at the entrance where the fees are collected. 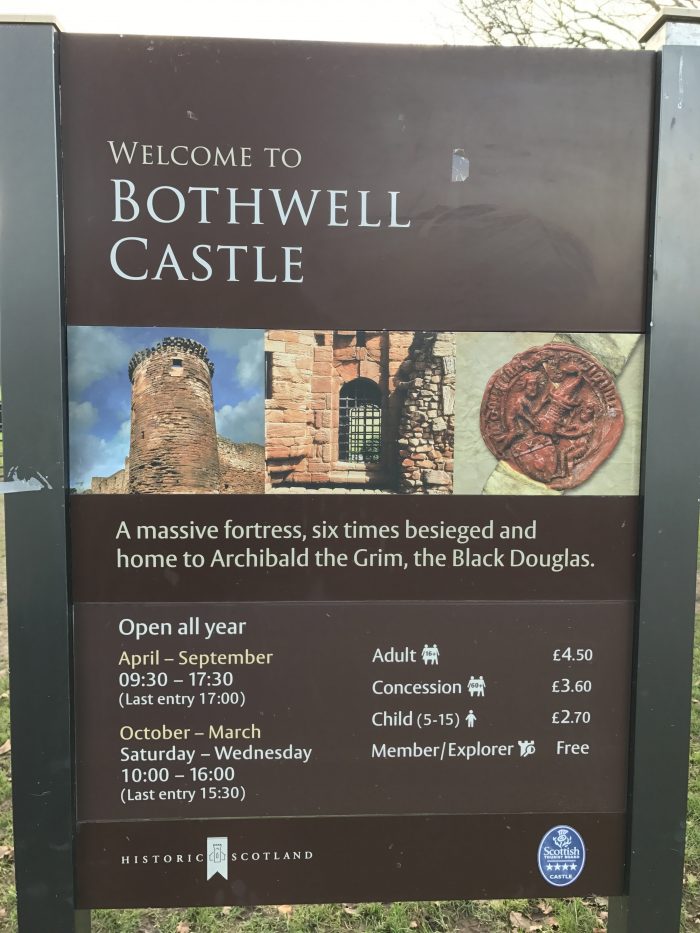 Considering it was January in Scotland, it was a rather nice & sunny day. Really, anything other than miserable cold & wind is pleasant this time of year. 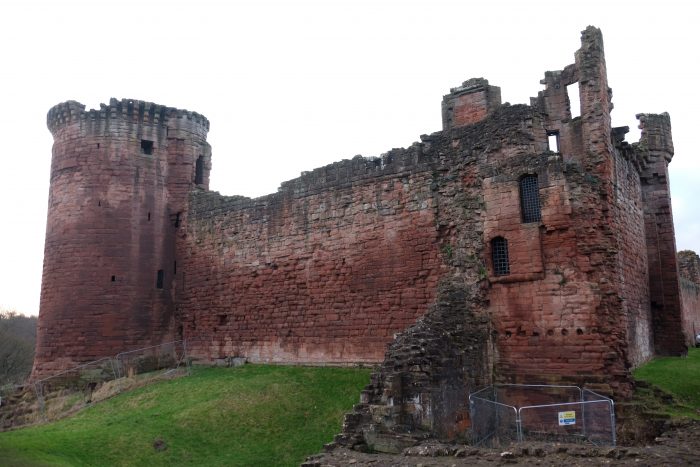 Bothwell Castle isn’t the biggest castle in the world, but it’s in decent condition for its age (aside from the one wall that was closed for repair due to falling masonry). It’s situated with a nice view of the River Clyde as it winds its way toward Glasgow. 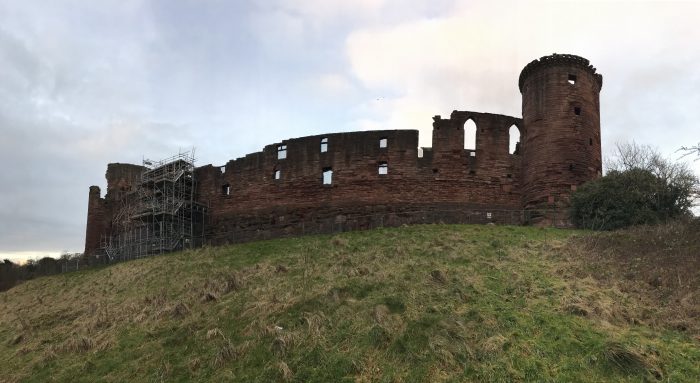 The castle is actually comprised of two sections. The older section was built around 1260 by the Murray family, and saw several battles during the Wars of Independence. Due to these conflicts, it was never actually completed. 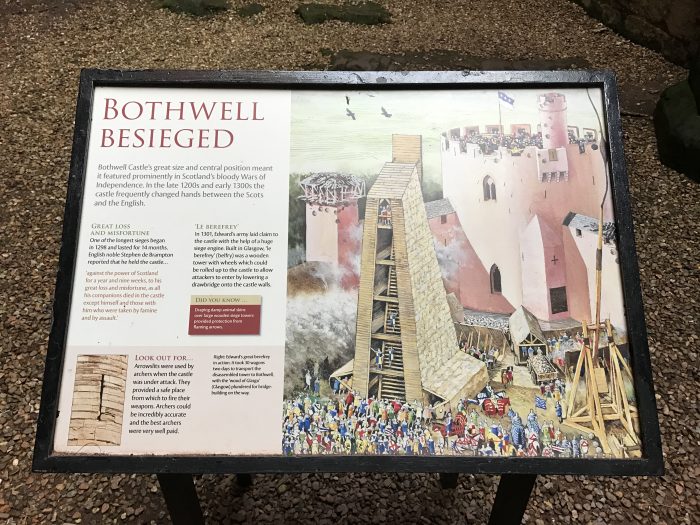 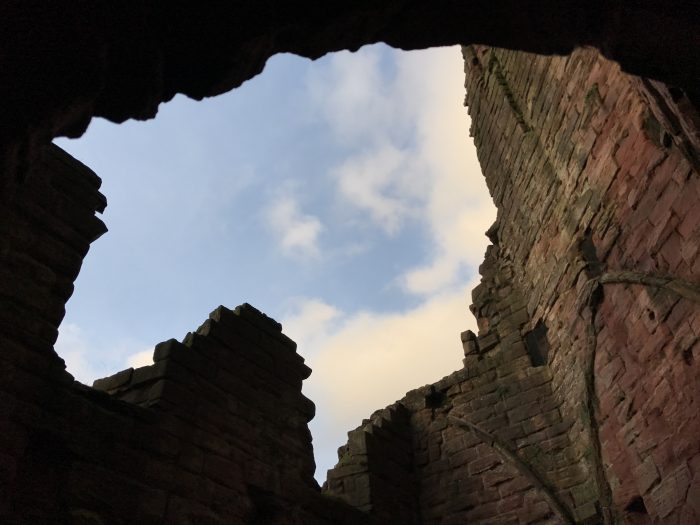 The second part of Bothwell Castle lies to the south, though the two sections are connected by an outer wall. This southern part was constructed by the Douglas family in the late 1300s and early 1400s.

This newer section is in better condition. Down below, you can see an exhibit about warfare in the cellar, and up above, there is the Great Hall. 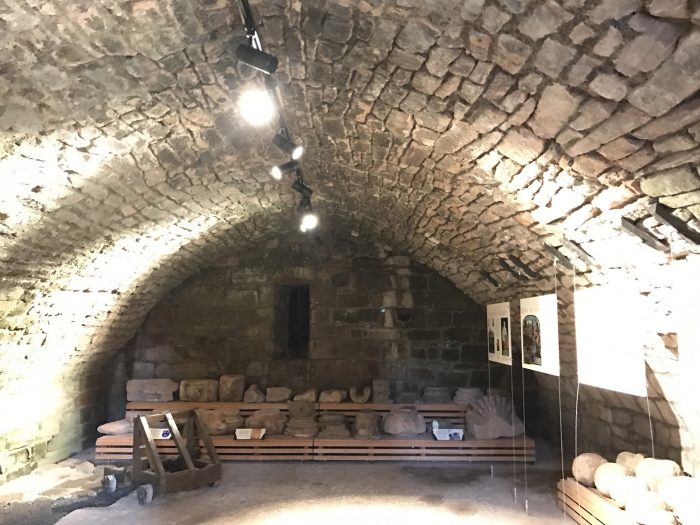 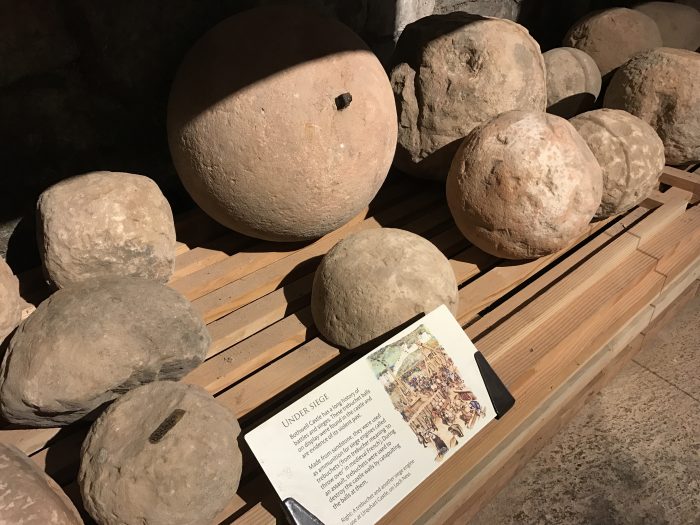 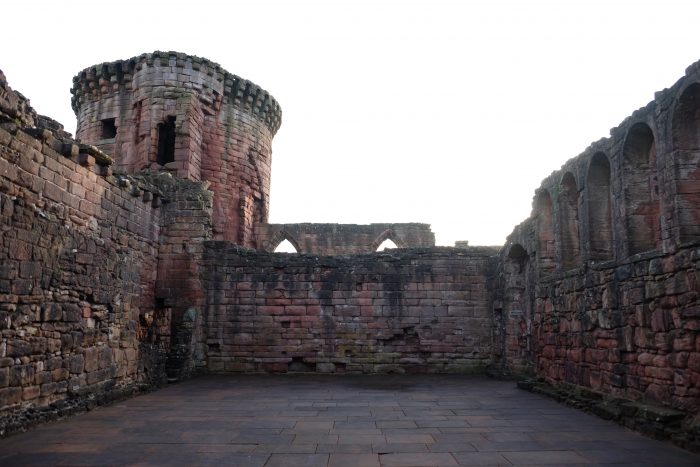 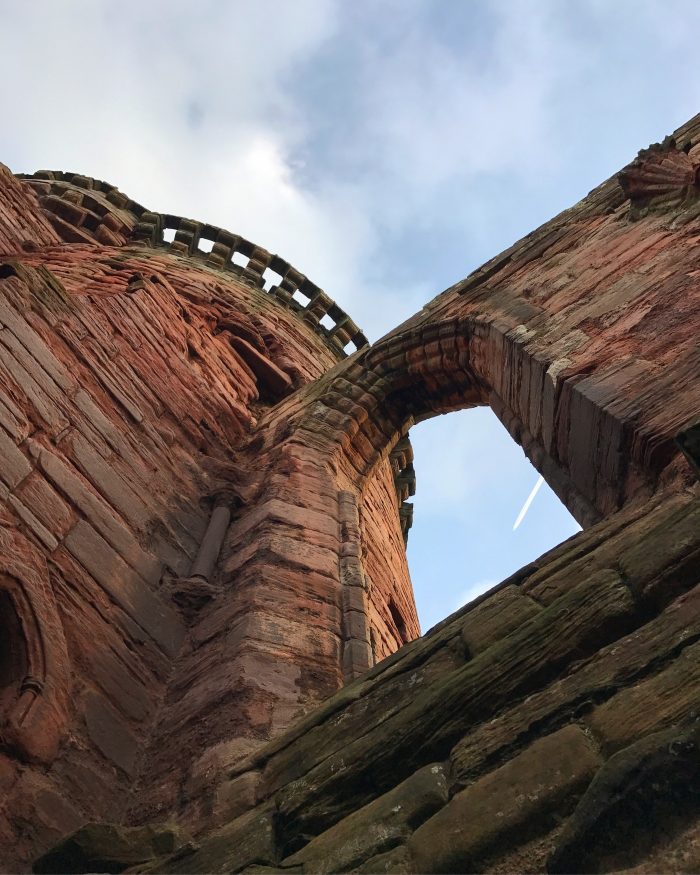 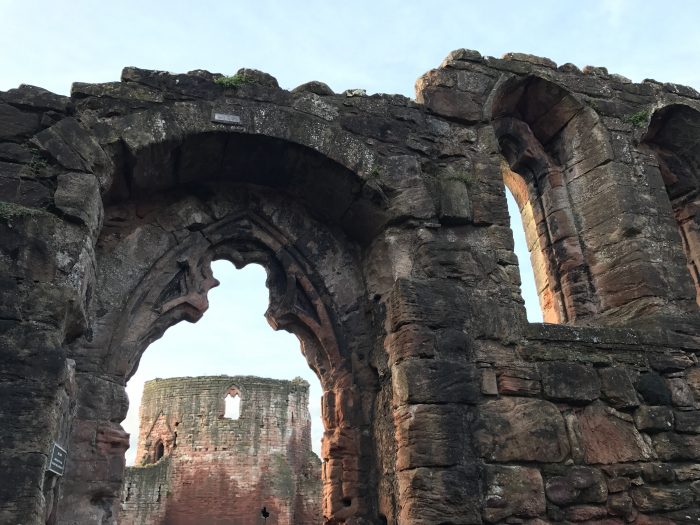 Heading back to the older section of Bothwell Castle, I climbed the stone stairs to the top of the donjon for amazing views across the Clyde. 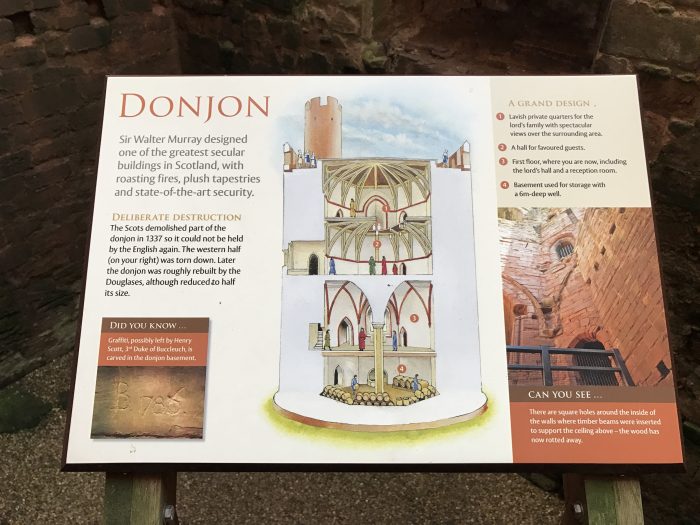 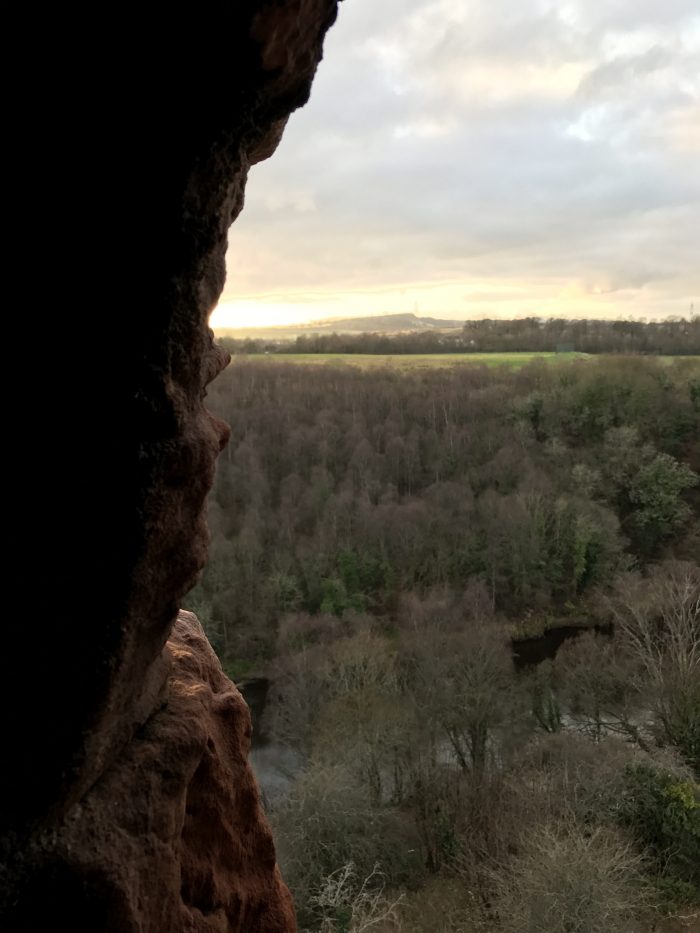 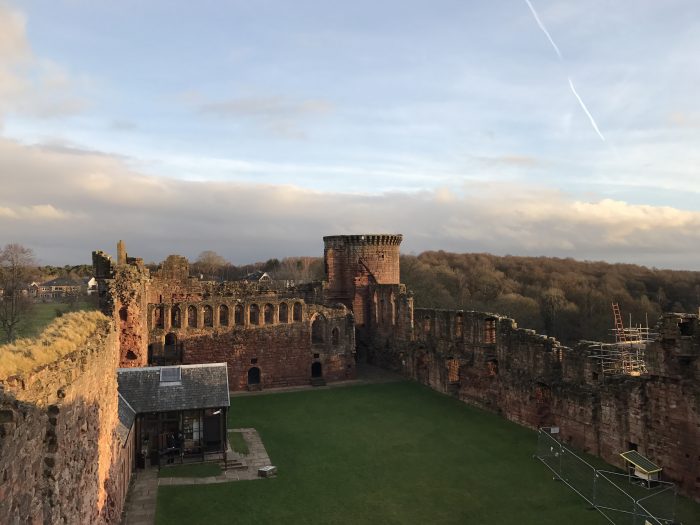 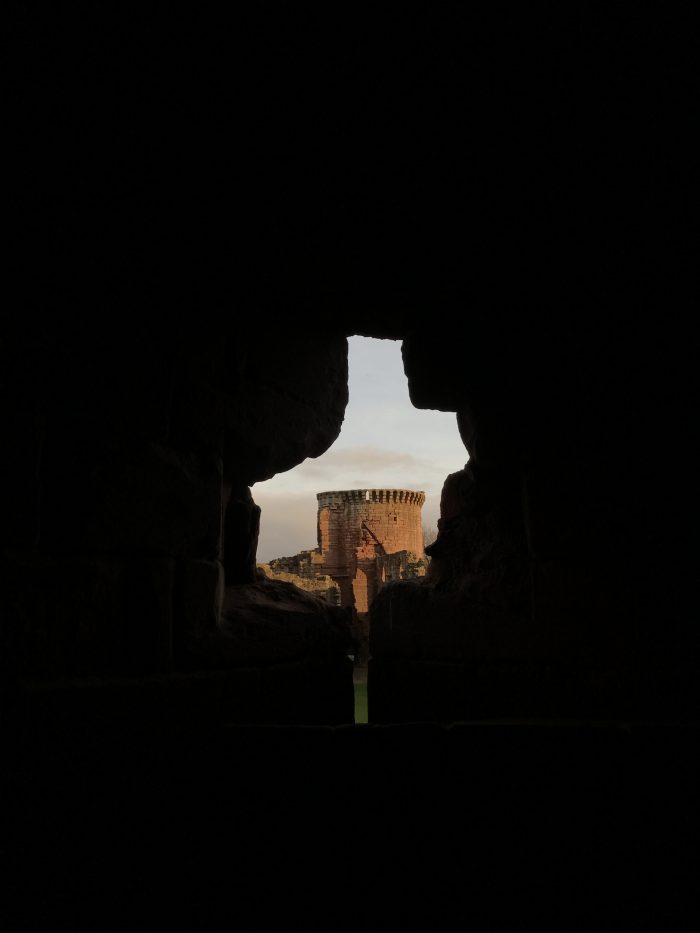 After exploring all the hidden areas of Bothwell Castle, it was time to head back to the train station. Rather than following the road, I followed the River Clyde along the Clyde Walkway. The paths to the trail along the river aren’t quite marked, but the lovely staff at the castle will be more than happy to point you in the right direction. 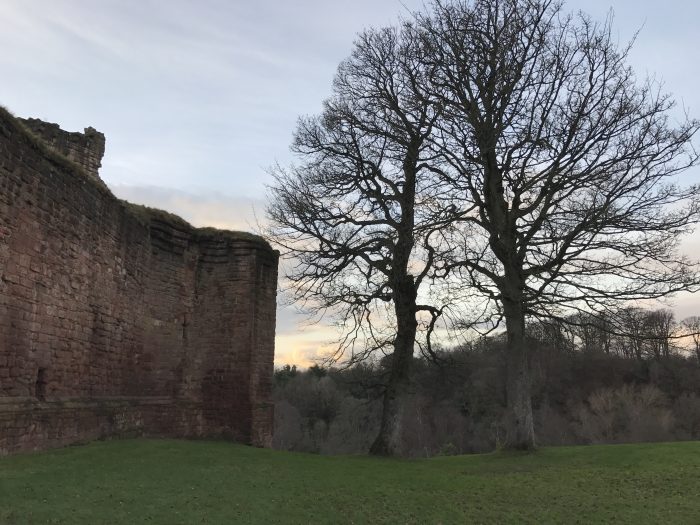 It took a bit longer to get back to Uddingston along the Clyde, but it’s a pleasant walk. There were plenty of people out jogging & walking their dogs as the low winter sun was beginning to set. Plus there was also this mysterious little door. 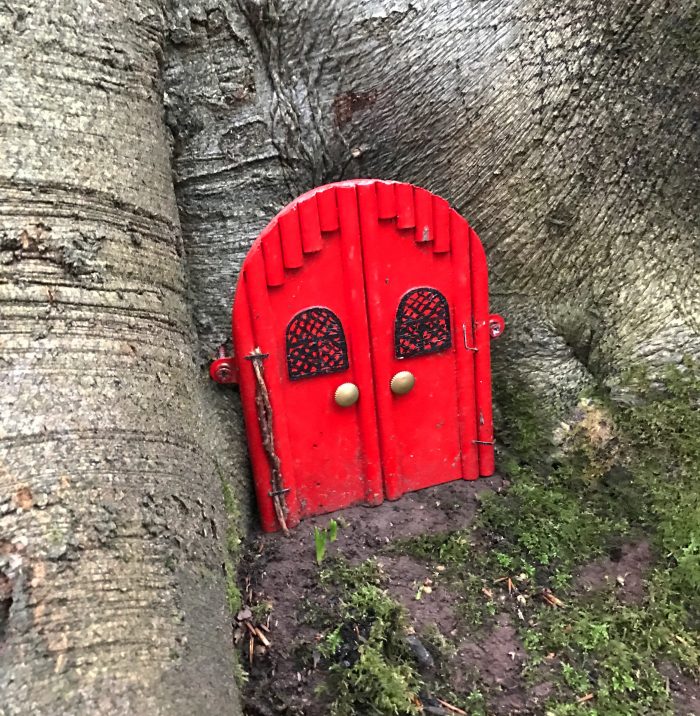 Back at Uddingston Station, I didn’t have to wait long for a train. Another perk of Bothwell Castle being so close to Glasgow is that the trains there and back run every 15-30 minutes.

While visiting cities like Glasgow is fun, sometimes it’s nice to escape for a bit. One of the best things about Glasgow is that it has a variety of quick day trips outside the city. A day trip from Glasgow to Bothwell Castle can be for as short as a few hours if you’d just like to get out for a little while to see some history in a nice landscape. 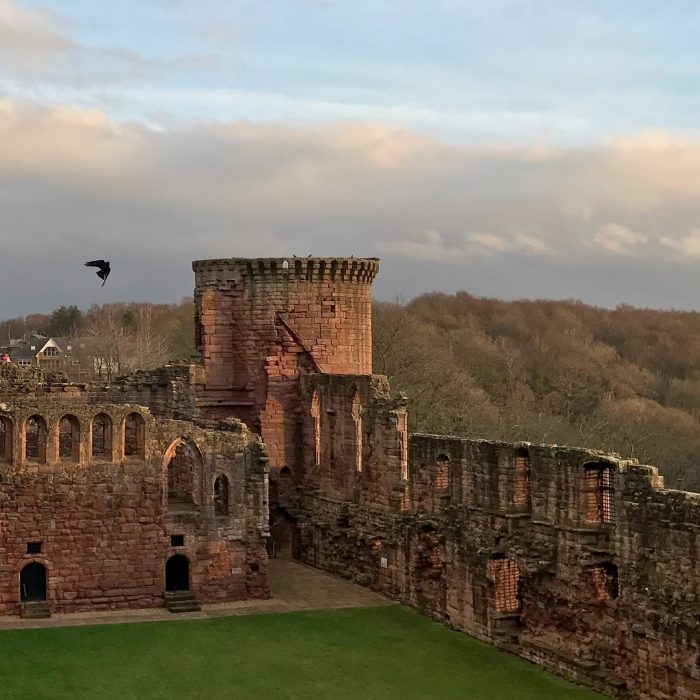