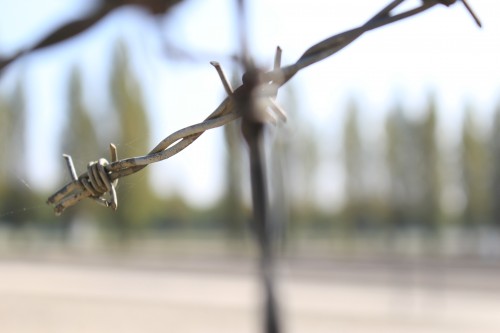 The first time I visited Germany, I was 15. I’d never been away from home before without my parents, much less to another continent. I went with a high school summer trip. While I gradually became accustomed to traveling, and by the end of the trip in London, I had found a country I had would wanted to repeatedly visit in the future, the beginning of the trip was rough. To be honest, I don’t remember a lot about that first trip to Munich.

I had set off on my most recent trip to Germany wanting to have new experiences, so I debated how much I wanted to go to places I had been when I was 15. One of these places was Dachau, home of the first Nazi concentration camp.

Eventually I realized that Dachau was a place I needed to revisit because my memories of the first trip had faded. It’s not an easy trip to make, but it should be on the list for anyone who is visiting Munich for at least a few days, as it’s an important marker of history, especially for Jews.

How to get to Dachau Concentration Camp

Dachau is easy to reach from Munich by suburban train. Once you exit the Dachau station, there are signs marking a path (called the Path of Remembrance) toward the Dachau Concentration Camp, or you can also take a bus. I chose to walk along the path, as this is the same path that many of the prisoners took as they arrived at Dachau train station. There are 11 signs marking the way, each with information and photographs. The entire walk takes about 45 minutes. 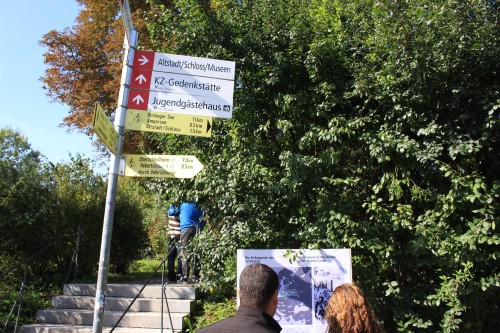 The most remarkable part of this walk is thinking about how this is just a regular residential neighborhood, much as it was during World War II. Were it not for the signs, you’d have no idea that a place that caused so many people so much pain was located so close by.

Some of the signs along the way address how close the camps were to the town. In fact, when Dachau was liberated in 1945, the liberating soldiers forced the townspeople to bury the dead Jewish prisoners who had arrived on a train from Buchenwald, as they considered the townspeople to be complicit with the atrocities.

All of this comes to mind as you walk toward the camp. I passed a few elderly people, and I couldn’t help but wonder their stories. Had they lived here their entire lives? Were they children during the war? Were their parents involved in some way? I almost wanted to talk to them just to hear about what their lives had been like. Not out of judgement, but just out of the curiosity you might have when meeting anyone who has lived a long time, especially in a place of historical note.

I don’t mean any of this in a way that paints Dachau today in a negative light. The town today seems like a nice quiet place that is respectful of its history. I know that not everyone during the time period was a Nazi and everything has changed since then. Most people had no idea what was actually going on inside the camp. Just as some Americans might be happy today if their state announced there would be a new prison in their town, residents of Dachau were happy that a camp was located near them, as it provided jobs & brought along workers with disposable incomes. Some people did indeed resist. In fact, one sign along the walk describes how on April 28th, 1945, citizens of Dachau, along with escaped prisoners, took control of the city hall in a revolt. The revolt was quashed by the SS. The camp was liberated the next day.

A visit to Dachau Concentration Camp

I didn’t see a single other tourist along my walk, but I arrived at the Dachau concentration camp to find it was somewhat more crowded with tourists who had taken the bus, as well as several school groups. As I explored the grounds, I noted that nearly all of the tourists were from countries other than Germany. While I was worried that the school groups might not treat everything with the respect it deserves, as some kids in school groups all over the world are wont to do, everyone on the grounds was respectful & quiet.

All visitors to the main portion of the Dachau camp enter through the iron gates, beneath the “Arbeit Macht Frei” (“Work Makes You Free”) sign. 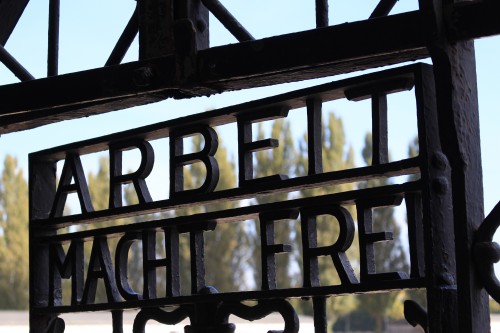 This sign was stolen a couple of months later, possibly by neo-Nazis, which was the case in a similar theft from Auschwitz in 2009. The sign was found a couple of years later.

Dachau was the first camp opened by Adolf Hitler in 1933. While it was not an extermination camp like Auschwitz, thousands of people still died at the site during the 12 years it was open, and thousands more who died in other camps first passed through Dachau. Still others perished on their forced journeys. Many groups were imprisoned at Dachau including Jews, Catholics, clergy members, gypsies, homosexuals, Jehovah’s Witnesses, and political prisoners. 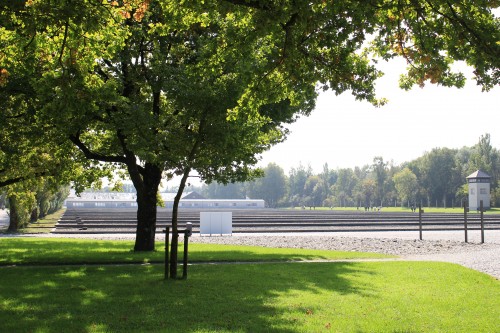 I walked through the grounds in the reverse order of how most people do it. I probably should have started by visiting the museum. I realized my mistake when I eventually went to it as my last stop, found myself at the very end of the exhibits, then had to walk all the way through them to get to the beginning.

The museum features individual stories of some of the people who were housed in the concentration camp, along with photos, videos, and other artifacts. Along with the stories of prisoners, there are also more stories of resistance. Plan on spending at least an hour inside the museum, if not more. I recommend also watching the documentary video that plays on a loop in the theater. As moving as the entire experience is, it’s particularly angering at the end when you read about the prosecutions (or lack thereof) of those who were responsible. While there were indeed many men who were punished for their crimes at Dachau and other camps, there must have been hundreds if not thousands more who were able to return home after the war with no sentence beyond having to live with what they had done. Such is unfortunately the case in most wars, still to this day.

The history of Dachau concentration camp after the war is an interesting one. While many might think the story ended 1945, the site continued to hold refugees as well the U.S. military for years after. As a result of usage, most of the original buildings were demolished. It was not until 1965 that the memorial site was officially established. The foundations are recreations, as are the 2 barracks and the watchtowers. The crematoriums were preserved. 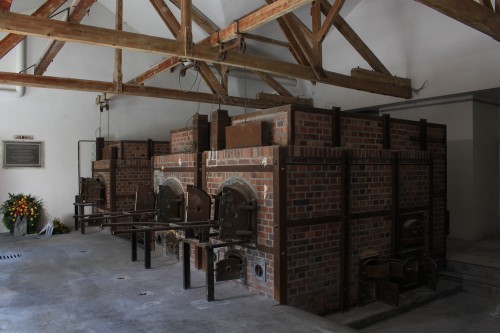 A moment of dark humor here: I found it amusing that the only place I saw a no smoking sign posted was near the entrance to the crematorium area. 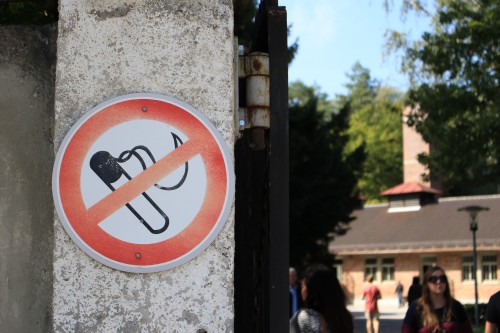 Other more recent additions to the Dachau site are memorials to the various groups who were imprisoned there, as well as a church of reconciliation, which is open to everyone and contains documents and art relating to the camp and human rights. 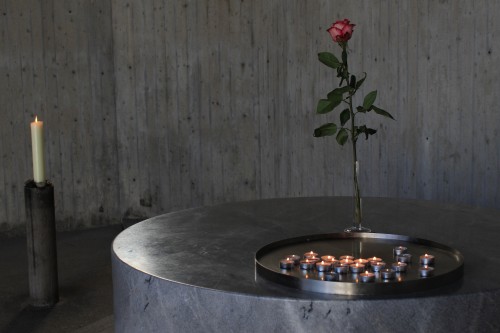 One thing to note if you are looking for information about the Dachau concentration camp online is that there appear to be many sites out there of dubious bias. While I was doing more research about events and historical sites relating to some parts of my experience, I came across several websites that appear to be written by Nazi-sympathizers and Holocaust-deniers. I will not link to any of these sites of course, but just know that if you find some resources on random sites out there that seem a bit “off”, your suspicions might be right. Some of these sites tried to diminish death counts, while others compared Nazi actions to other war crimes committed throughout history by the British & Americans, as if “other countries do it too!” is any justification for the criminal actions that occurred in places such as Dachau. To those who run the sites in question, I will say that if you spend your time defending the actions of the Nazis & trying to minimize their atrocities, then you may want to re-think what you are doing with your life & do something other than attempting to defend war criminals.

With the misinformation being spread online, and the rise of right wing, anti-immigrant, anti-Semitic feelings once again in Europe as a whole, the Dachau concentration camp is an important reminder that there is still a long way to go until we can all live in a tolerant world without fear.

Edited: 1/28/17 Today, the White House said that they did not mention Jews as part of yesterday’s Holocaust Remembrance Day statement because others were killed too. It’s just like how I referenced above. The minimizing of history begins with eroding the edges. It’s up to us to remember the truth, and to not let white supremacists write alternative facts.