Glasgow is a city that is near and dear to my heart. I lived there for a couple of years in college, so I go back every year or so. Over the years, my friends there have introduced me to the Scottish craft beer scene. It’s interesting to go back now, knowing that my first experiences drinking beer there were fueled entirely by the local mass-produced lager, Tennent’s. Nowadays, we check out the latest places to drink good beer. Based on these experiences, here is my guide to the best craft beer in Glasgow.

I have to start with the bar where I first had Scottish craft beer, Brewdog Glasgow. Located across from the Kelvingrove Museum in the West End, this was one of Brewdog’s first bars. The company’s headquarters is located further north near Aberdeen, but they now have bars all over the United Kingdom. 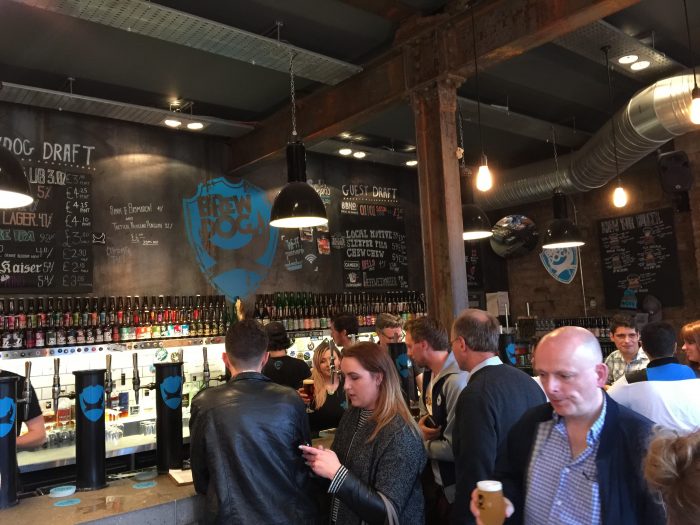 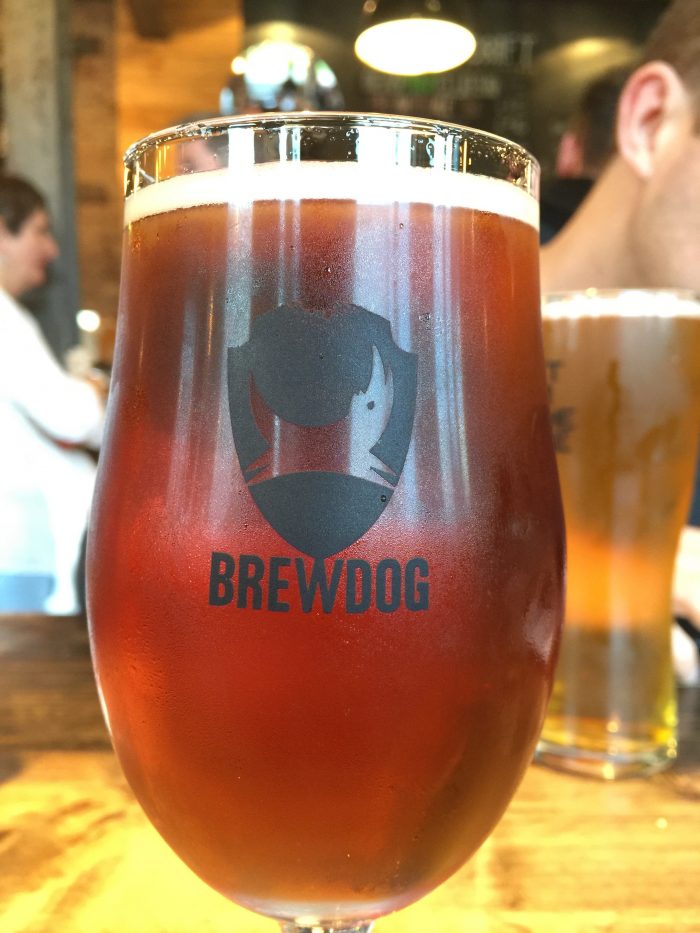 While this may now be one of the smaller Brewdog locations, I’ll always remember it as the place where I first learned that Scotland was now making decent beer. It has around 15 taps, plus dozens of bottles, including both Brewdog’s own as well as guests. Due to its location near the University of Glasgow, the crowds tend to be younger, but not in a shouty student sort of way thanks to the price.

A couple of years ago, Brewdog opened a new bar, bottle shop, and restaurant in the Merchant City area of Glasgow. This bar can get more crowded, especially on weekends, but it has one of the best selections of craft beer in Glasgow. 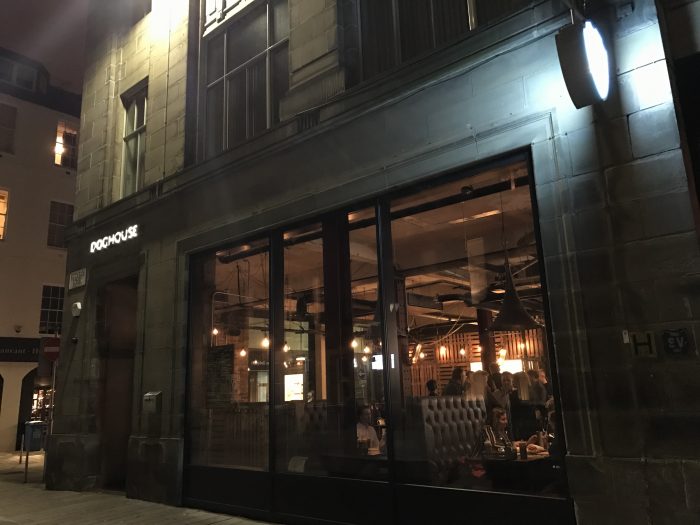 If you don’t see something you like among the 25 or so taps, go to the bottle shop in the back, where you’re sure to find something special amongst the 250+ bottles. 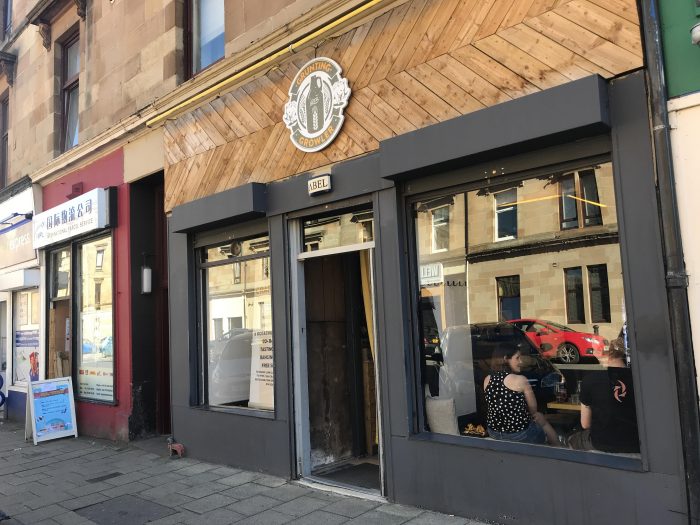 The Grunting Growler is one of my favorite craft beer bars in Glasgow. While it does specialize in growler fills (hence the name) & take-away bottles & cans, there’s also space for a few tables where you can sit and enjoy a beer. They have probably the best overall beer selection in the city, with a wide variety from across the UK. 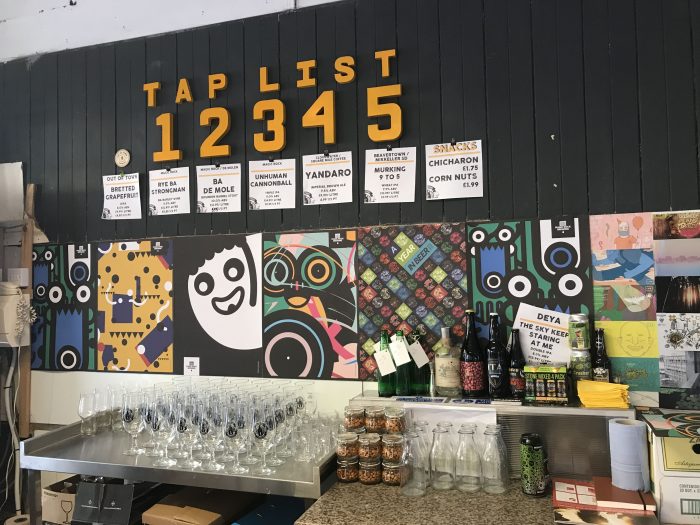 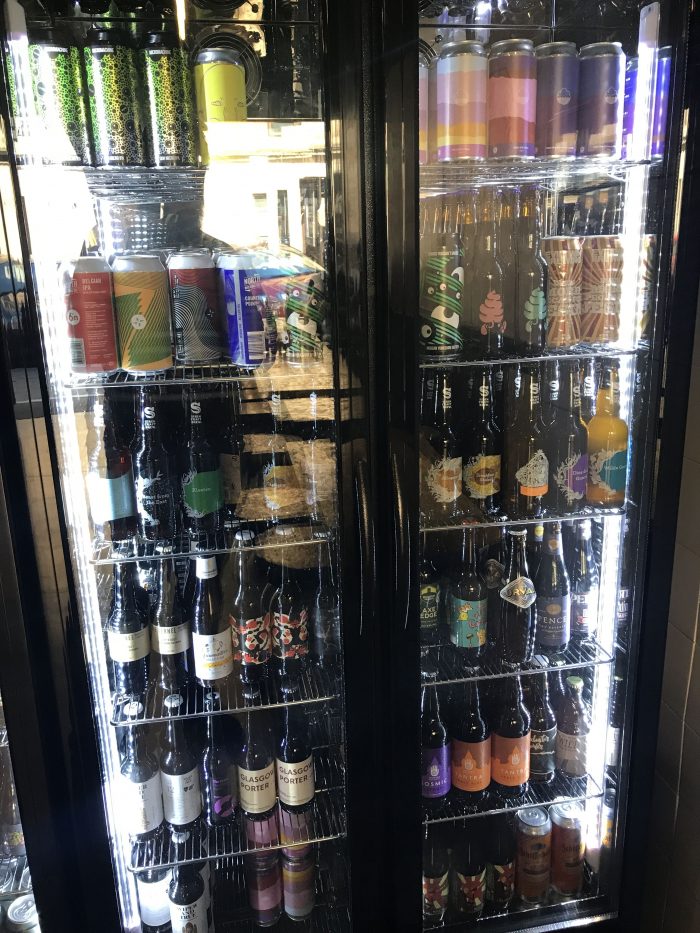 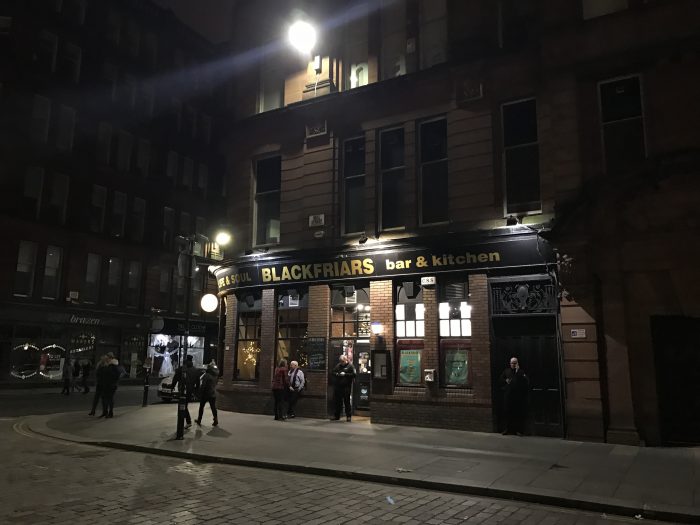 Blackfriars is located a couple of blocks away from Doghouse in Merchant City. It’s a fun place that skews on the older side. They have lots of cask ales and macros, but look in the side fridges and you’ll spot a small, but quality selection of bottles and cans from around the U.K., as well as the United States and Europe. 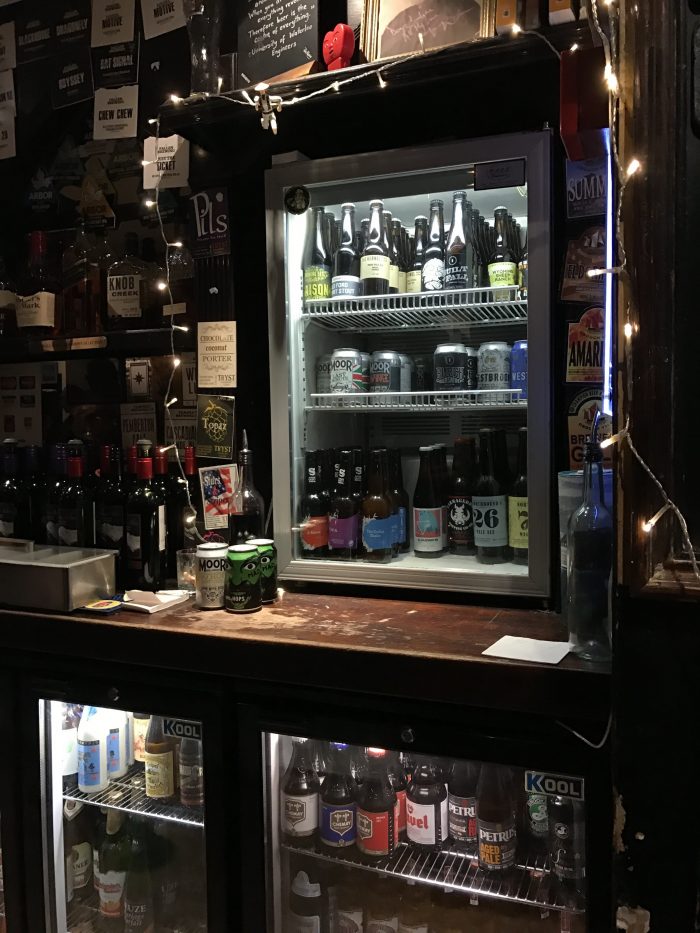 Drygate is located near Glasgow Cathedral, in an area with a rich brewing tradition. Breweries have existed in this neighborhood for hundreds of years. Drygate’s brewery & brewpub is located just next to the massive Tennent’s complex. If it seems surprising that they would build in the shadow of a large producer, it makes more sense when you learn that Drygate is actually a joint venture of the owner of Tennent’s & Williams Bros Brewing. 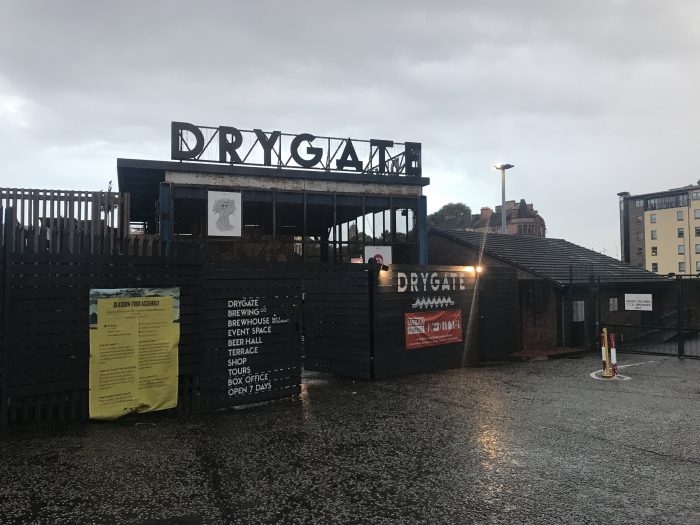 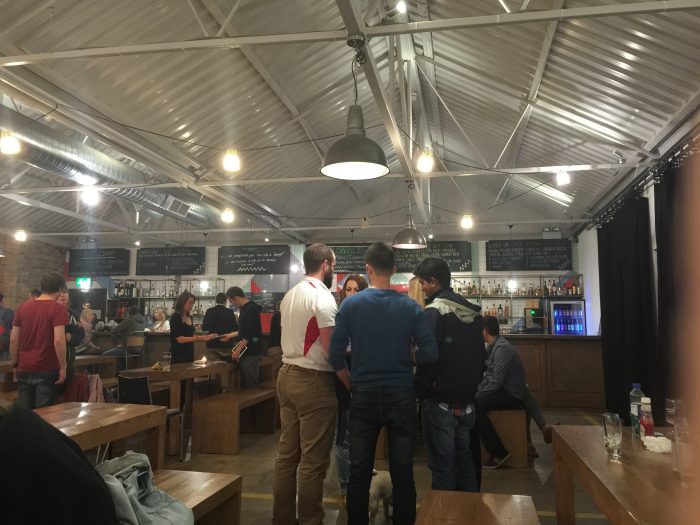 The brewpub is sprawling, with some outdoor areas to enjoy on those rare days where Scotland’s weather cooperates. Had Drygate existed back when I was at the nearby University of Strathclyde, I would have spent a lot of time and money there.

Shilling Brewing Company is one of the newest entrants to Glasgow’s craft beer scene. Thanks to it being the most central craft beer bar in Glasgow, it has quickly become popular. I visited during the holiday period, and it was very crowded. It’s not the place to come for a quiet pint, but it’s definitely the place to come for a wide selection of beer. There is also a full bar & pizza available. 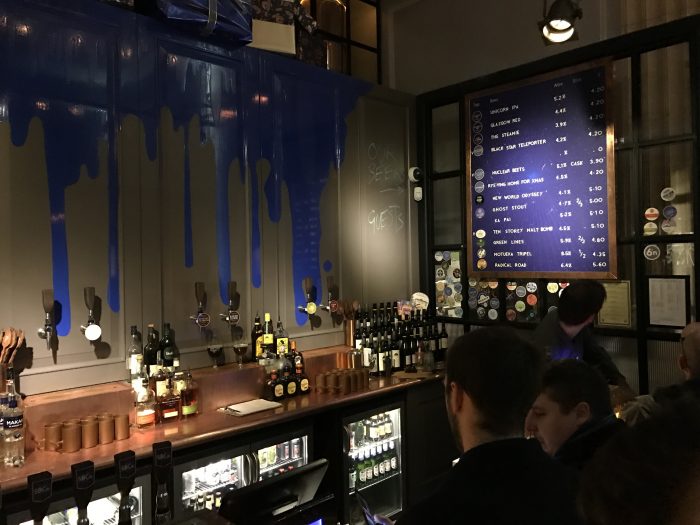 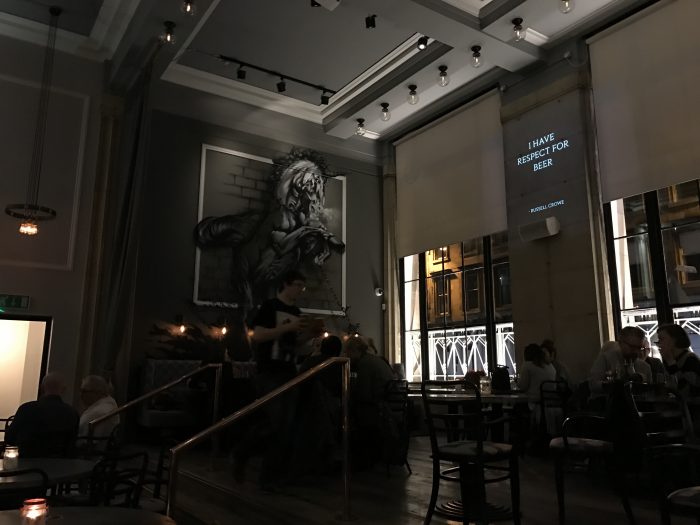 With brewing done on the premises, Shilling offers around 6-7 of their own beers on tap directly from tanks. An additional set of over a dozen guest taps rounds out the lineup. The bar has 31 lines in total. The guest beers tend to be mostly from very small breweries around Scotland & England.

There are a few other spots for craft beer in Glasgow that I haven’t had a chance to visit yet since I tend to end up at bars rather than take-away shops, but I have heard good things about Valhalla’s Goat & Wee Beer Shop, both of which have an outstanding selection of bottles & cans. There are also places such as Inn Deep & Bon Accord that specialize in craft ales.

For better or worse, Glasgow is a city with a great reputation for drinking. While much of this takes place in the mindset of drinking what’s cheap & convenient, it has been good to see everyone embrace craft beer in Glasgow more and more through the years.

Have you spotted any other great Glasgow beer bars or breweries? Let me know in the comments!