After landing at London Heathrow from Helsinki, I had a bit of a transit to make before I could relax for a couple of hours. London Heathrow is quite possibly one of the worst places on the planet.

Security in London is understandably tight, but the airport seems to go out of its way to make the whole process far more painful than it should be. After landing, I had to go through security again, even though I was staying in Terminal 3. This isn’t a huge deal, except the baggage scanning machines seemed to be malfunctioning. I’m used to bags being selected for extra screening every now and then, but the machines were signaling for nearly every bag to be subjected to additional testing. The problem was that there were only a few people available to do these tests, so there was a queue to get through the initial screen, then a second queue of people waiting to have their bags examined further.

Then, once I’d finally had my bag swabbed, picked apart, and repacked, I was then faced with another massive queue. Here, the staff were once again not particularly helpful. There were no signs stating what the queue was even for, so I went up to the guy who was managing it. I began to ask him where I should go while showing him my boarding pass, but he didn’t listen or look and only pointed me into the long line, which looked like it was going to take hours to move. At first I did go to the line, but I then realized there was no way that there wasn’t another line which was completely the case. Since I was going to be flying in first class, I was able to skip that entire queue and instead go straight to a counter. I get that a queue like that is hard to manage, but it would be nice if the staff at London Heathrow would do a better job of guiding passengers to the proper area for their ticket.

Once I had my passport checked, I was off to the American Airlines Flagship Lounge. 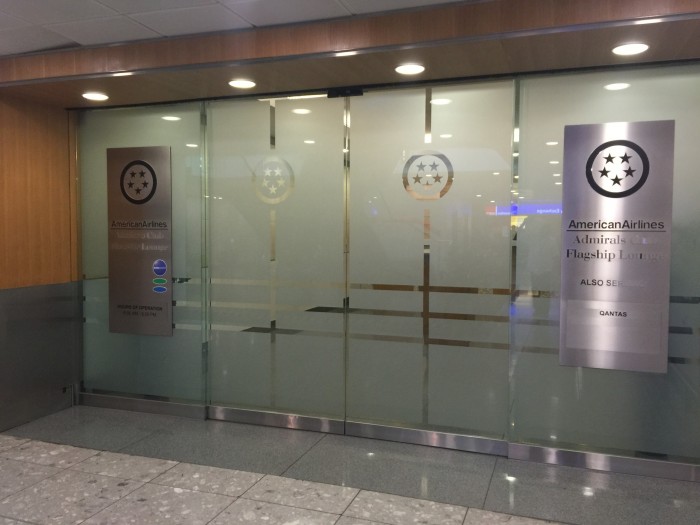 For most airlines, a Flagship Lounge would be a place for the airline to put out their best effort forward to give a good first impression. Of course, American Airlines doesn’t quite seem to grasp this, especially not in London.

The lounge clearly could use a refurbishment. It resembles a basic American lounge that you’d find in a regular airport, and not even one of the nicer Admirals Club lounges like in San Francisco. While the lounge does have nice flooring and decent furnishings, they still somehow feel dated. The low ceiling certainly doesn’t help. It almost feels claustrophobic. 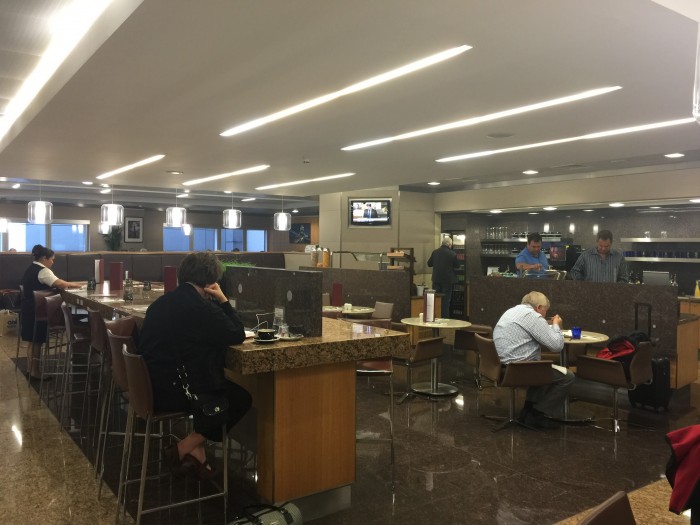 Part of the problem is that there aren’t many windows in the lounge, and the few that exist don’t let a lot of light in, especially on a grey English morning. Here is the sad view. 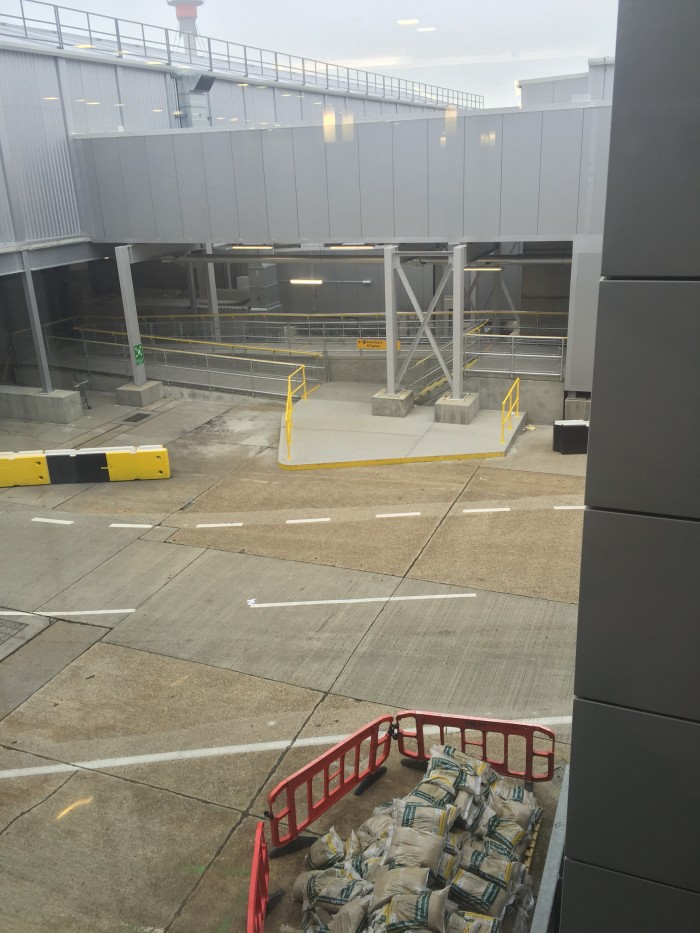 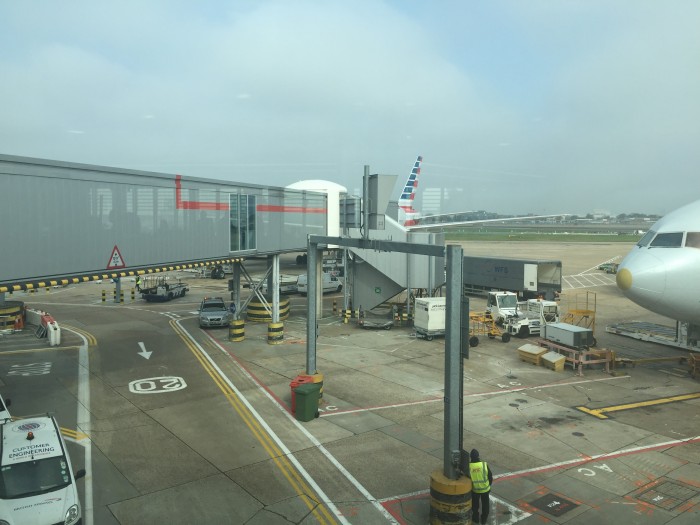 AA’s London Flagship Lounge does have solid service at least. The employees were all friendly, and in addition to hot dishes, there were also made-to-order meals available. The food was decent, though I did get caught a bit in between the breakfast and lunch meal services. 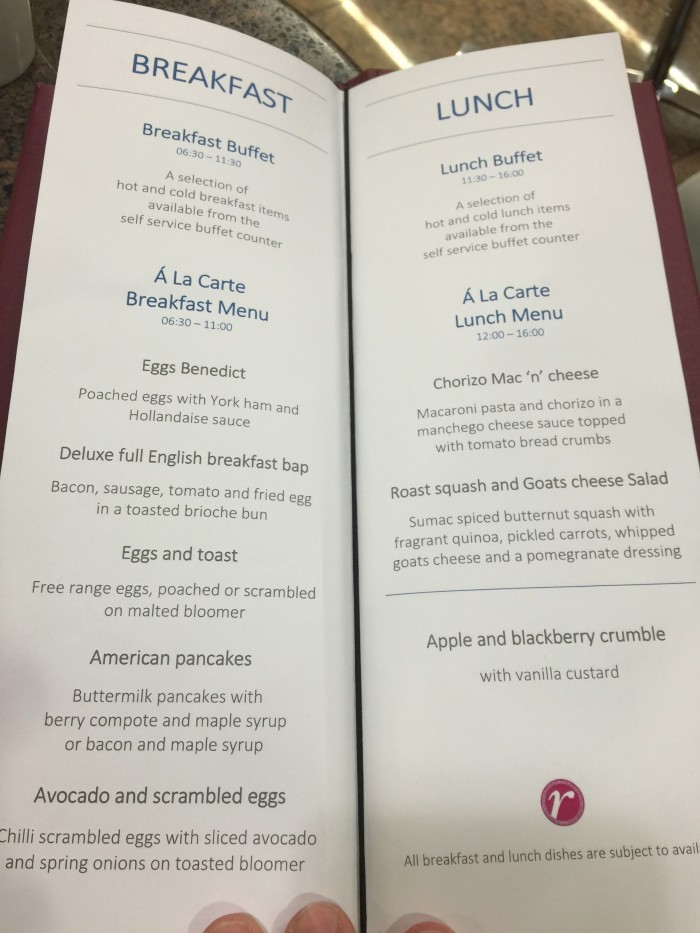 While the lounge is a bit bleak, at least there is plenty of space. The seating was adequate, but there were only three nice recliners available. I have no idea why some lounges do this. I don’t see the point of having so few seats that are going to be in high demand, as once people get one, they are understandably going to park their ass in one for as long as possible. 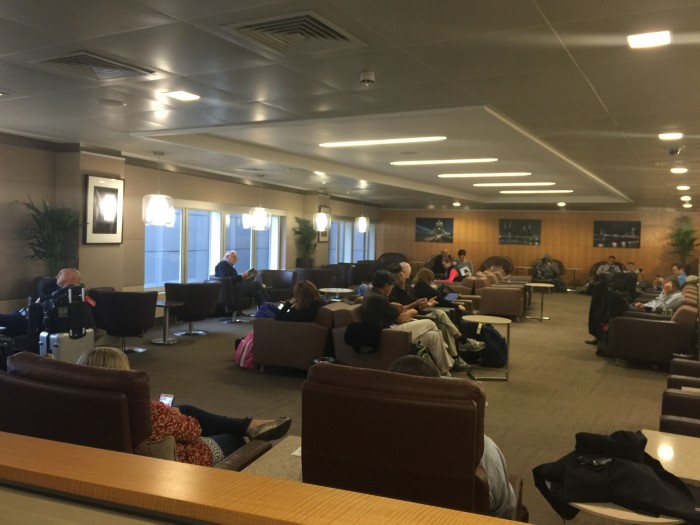 In addition to the regular seating, there are also a couple of TV lounges and a business center. 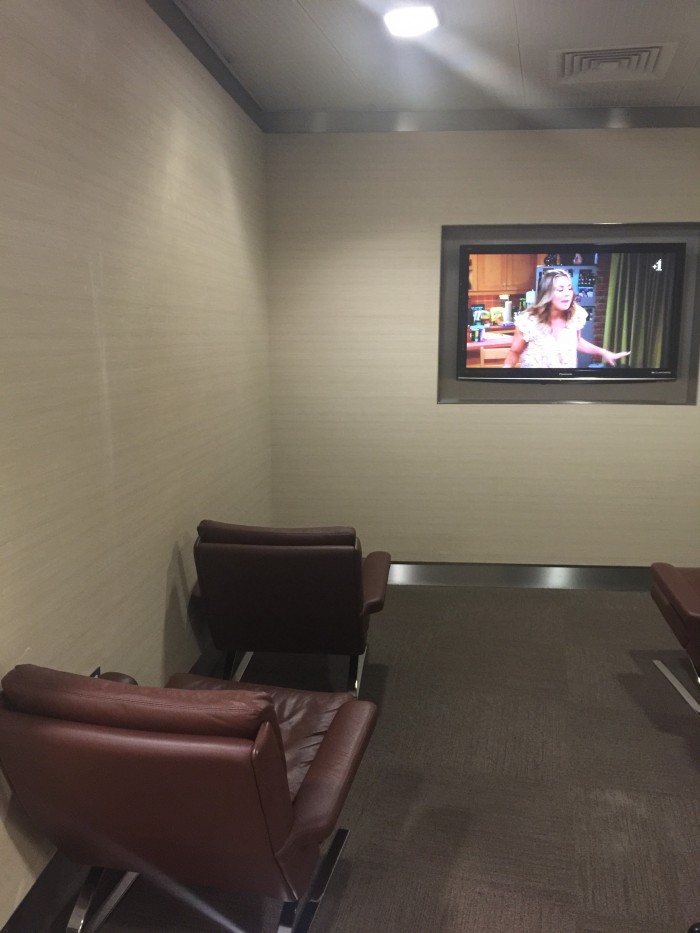 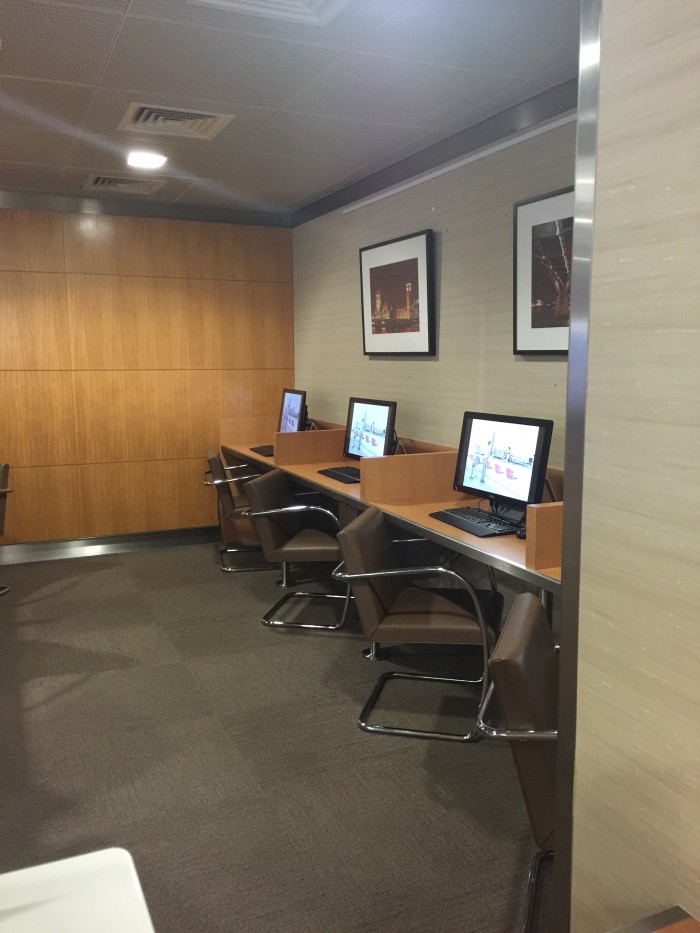 I sat in the dining area while I had some made-to-order eggs benedict, along with a bit of additional breakfast before it was cleared away. 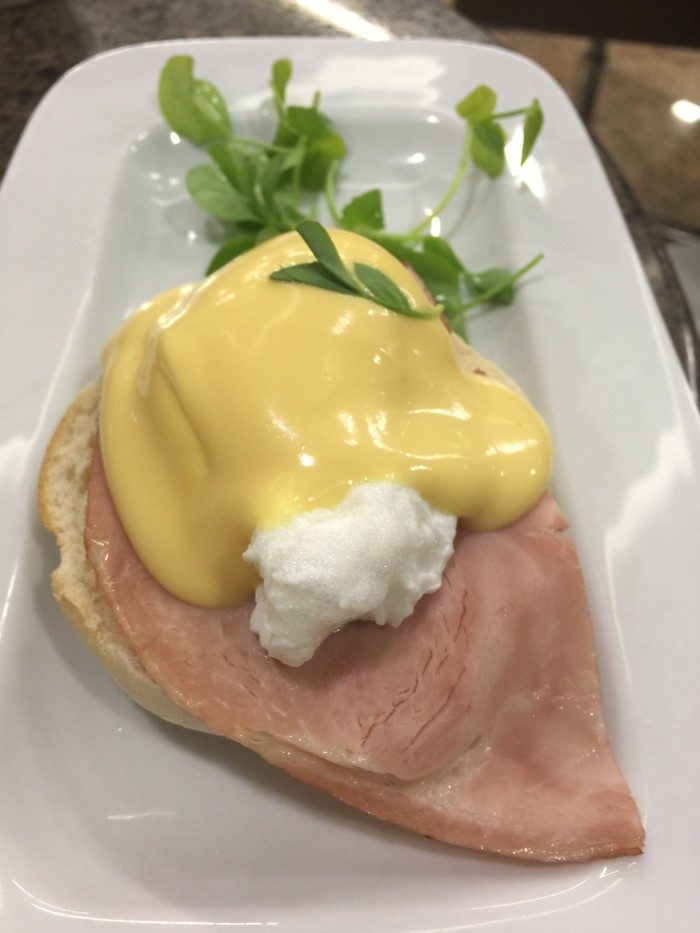 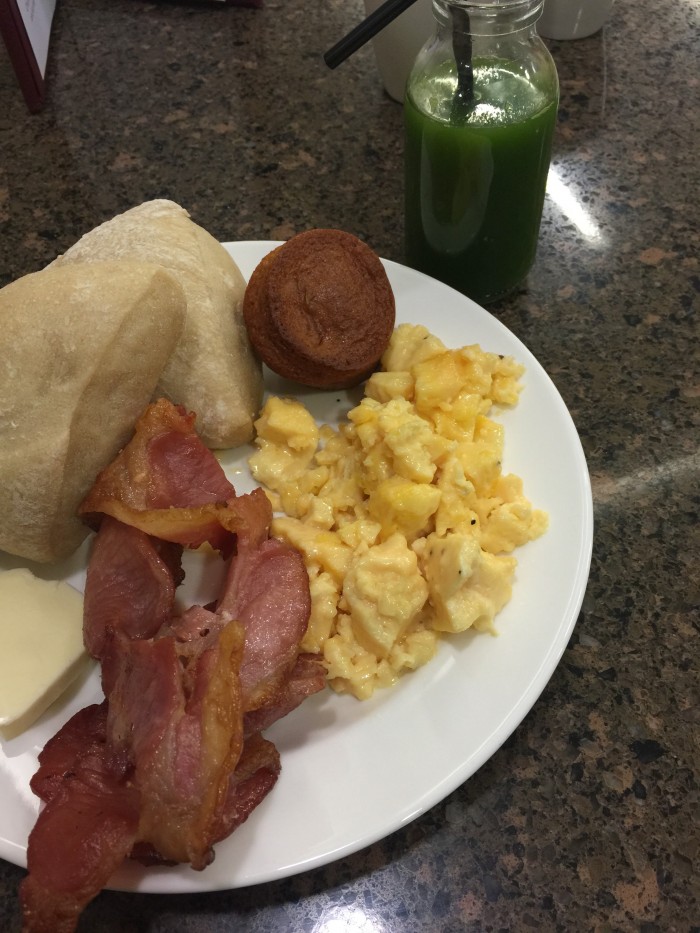 The tiny Diet Cokes made me feel like a giant, which is always nice. 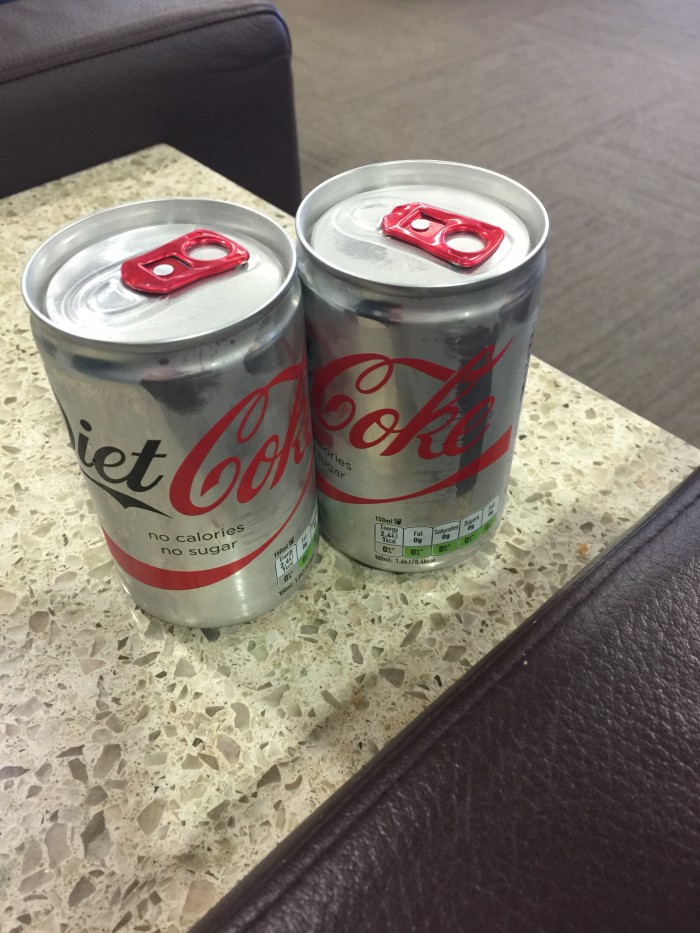 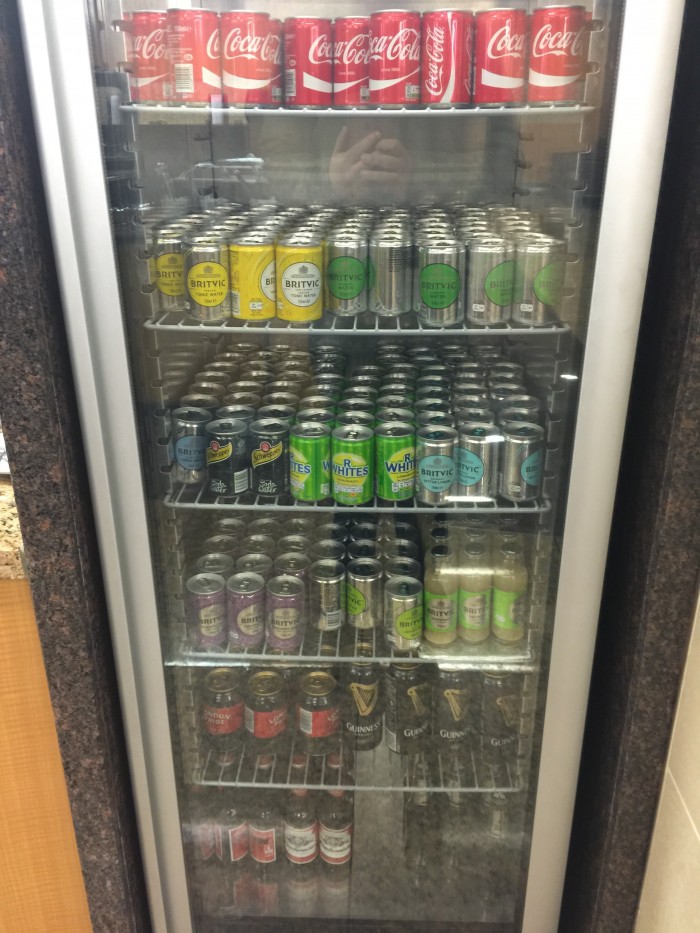 What the self-service bar may have lacked in quality, it made up for in breadth of selection. I don’t believe I’ve seen such a variety of liquors in a lounge like this. 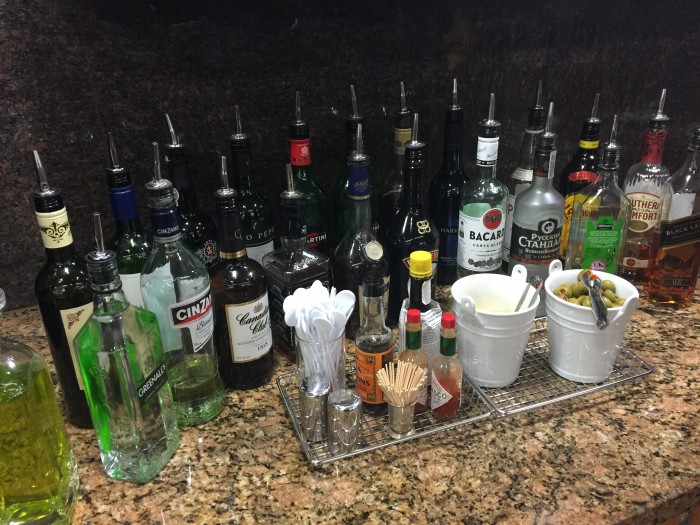 There were also plenty of different snacks available. 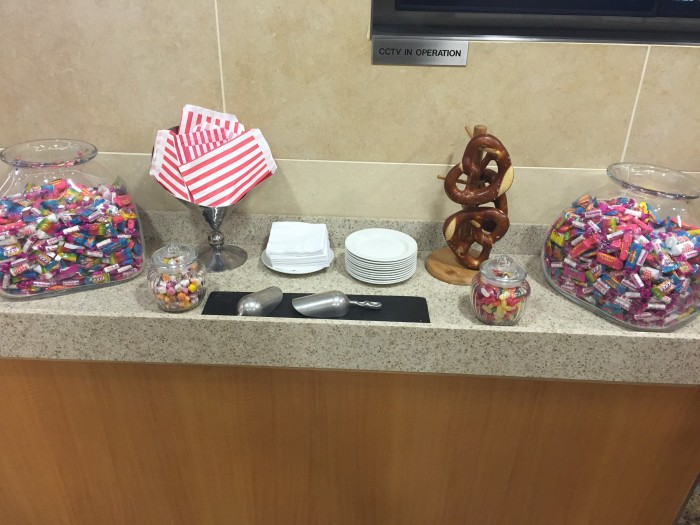 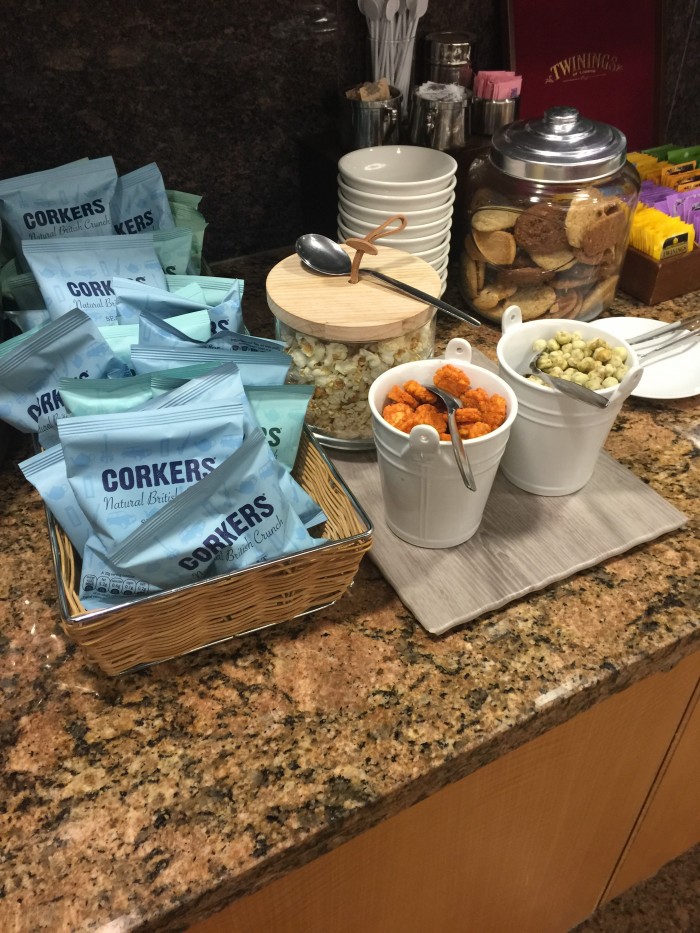 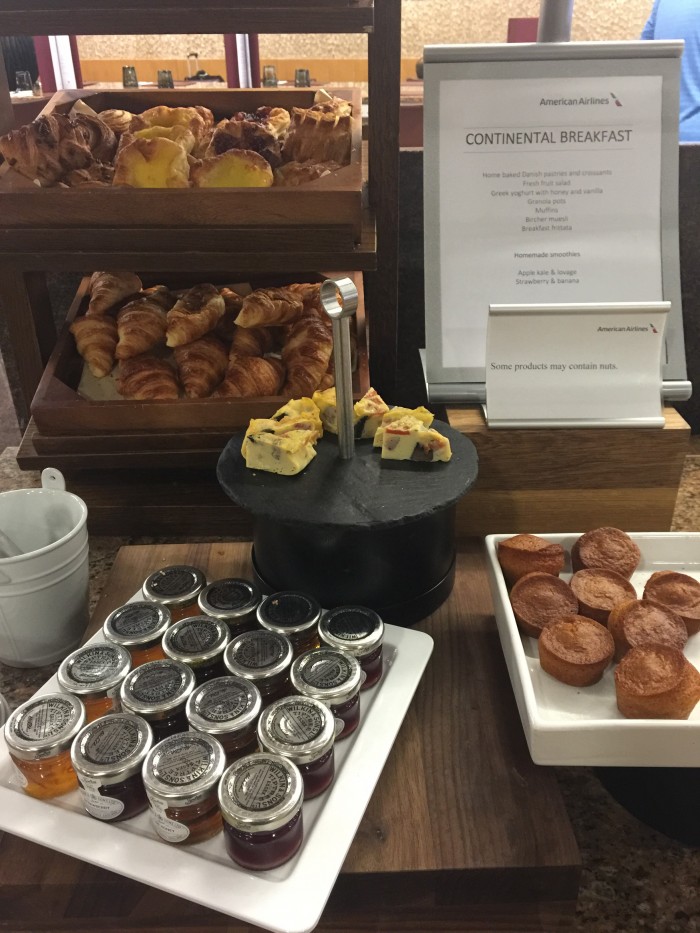 The selection of healthy items such as yogurt and fresh smoothies & juices was especially nice. 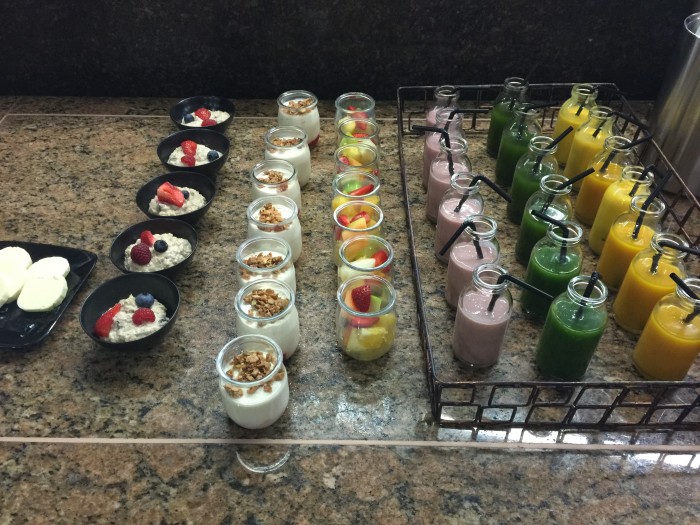 One of the pleasant aspects of the American Flagship Lounge at London Heathrow is that there were plenty of power outlets that didn’t even need plug adapters. On the other hand, wifi service was dismal, so it’s not like you’d be accomplishing much in the lounge anyway. 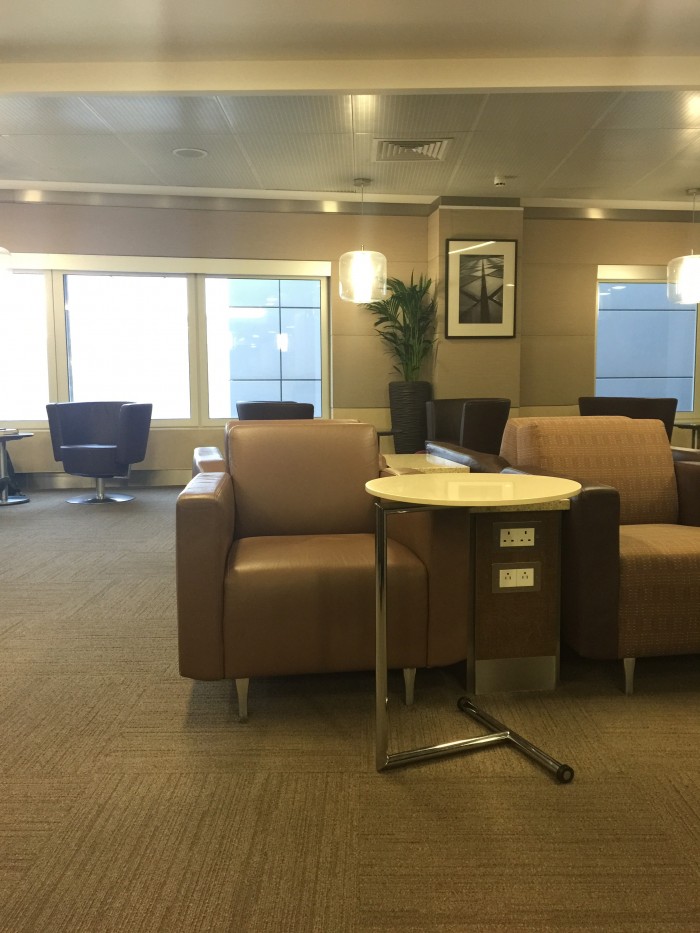 Adding to the weird atmosphere of the lounge was a constant whirring that was coming from some machine somewhere. I don’t know if it was the HVAC system, or something relating to airport operations, but whatever it was, it was constant.

Between that, the lack of sunlight, and the dated feeling of some of the decor, American Airlines has a long way to go to make their Flagship Lounge at London Heathrow a place that they can be proud of. The food and service are just fine, but considering how much of a hellscape the rest of Heathrow can be, American should be striving to create a space that can be a refuge for weary passengers. If you have access to the lounge, chances are you have access to one of the other Oneworld lounges in Terminal 3, which I have heard are nicer, but it’s disappointing that when flying first class on American, passengers are not treated to an experience that consistently feels like it is first class.