Portugal is filled with beautiful historic towns & cities. Thanks to being a small country, it’s easy to access many of them on a day trip if you are staying in major city. The medieval town of Évora is located less than two hours away from Lisbon, making it perfect for quick visit. Here’s my guide to taking a day trip from Lisbon to Évora.

How to get to Évora from Lisbon

I began my day trip from Lisbon to Évora by taking a local bus to Sete Rios bus station, which is on the north side of the city. You can actually pre-book bus tickets through the Rede Expressos app (MyRNE). This guarantees that you get a seat, plus you can even select a seat through the app. This didn’t really matter, since the bus wasn’t even half full. At the time of my trip, a round trip ticket from Lisbon to Évora was €21.30. It is also possible to travel by train, but there are far more buses than trains, so the bus is a better option. Plus, at 1 hour 45 minutes by bus, it’s not a long trip. If you don’t want to figure out transportation, here are some Évora tour options:

The Évora bus station is located just outside of the city center, so your welcome to the town will be unimpressive. After walking about 10-15 minutes through a nondescript area, you’ll suddenly begin to see what makes Évora a special destination.

Évora is a preserved medieval town circled by a city wall. Outside, it’s regular modern Portugal. Step inside the gates, and you’ll be taken back in time. This is the UNESCO World Heritage Site of Évora. 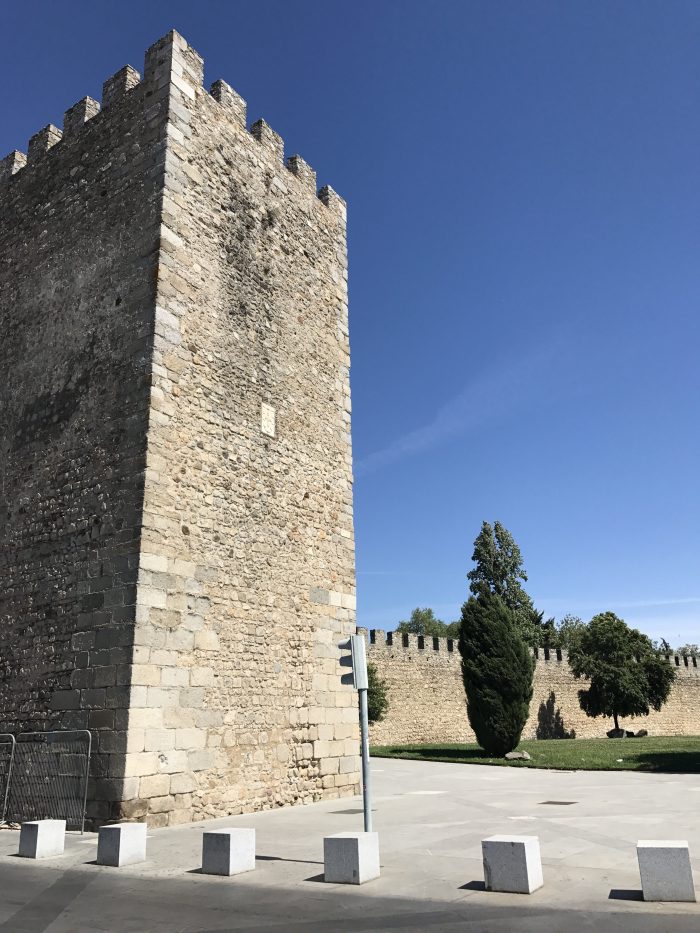 Where to eat in Évora

Before exploring the town, I wanted to get some food. Just inside the city wall there is an excellent restaurant called Restaurante Dom Joachim. This Michelin Bib Gourmand restaurant uses local ingredients in their Portuguese cuisine. It’s the sort of place where locals go for big Sunday lunches.

Dom Joachim was an excellent start to my day trip to Évora. I had the quail eggs in olive oil along with local warm sheep cheese for a starter, then squid, prawn, and monkfish skewers. Everything was of good quality and of good value. 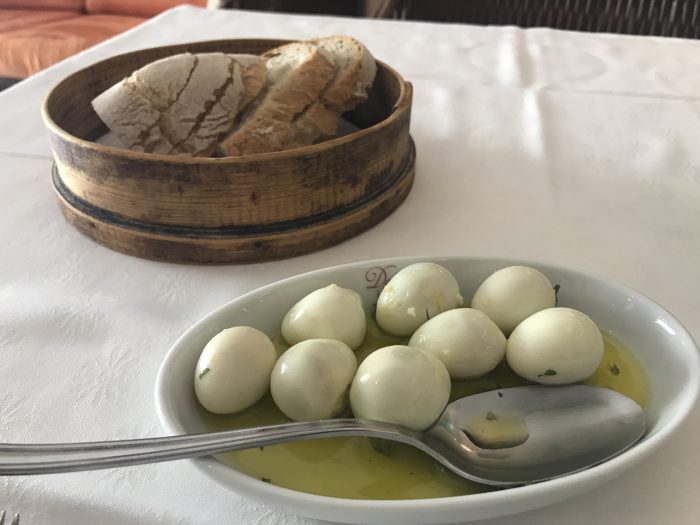 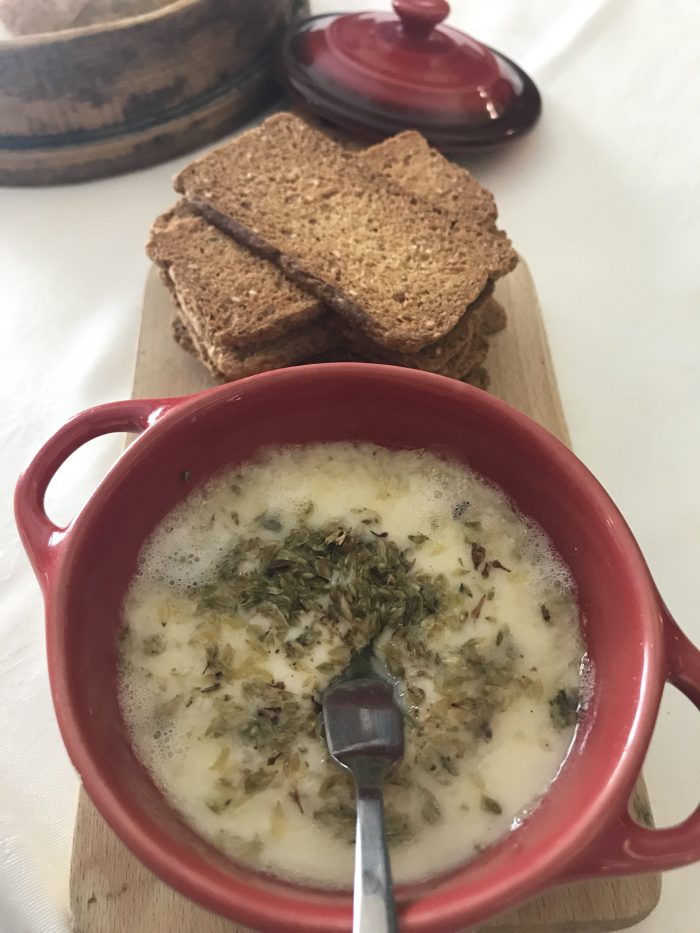 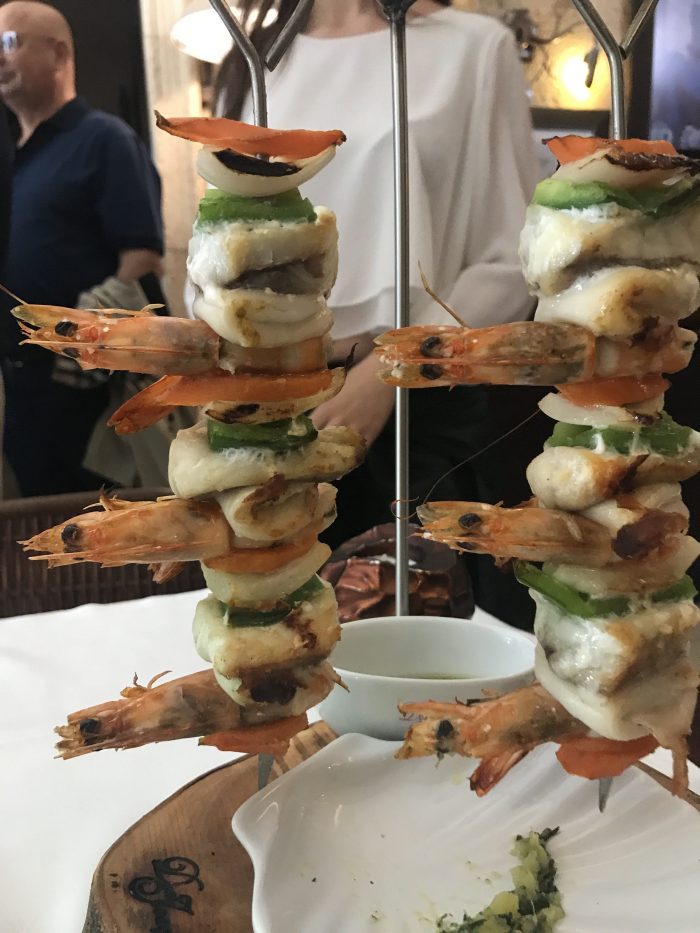 After lunch, it was time to explore Évora. It was a bright, sunny day, which was perfect for seeing the town. All of the buildings in Évora are white, with red tile roofs and yellow highlights. The midday sun shone brilliantly on them, almost blindingly so. 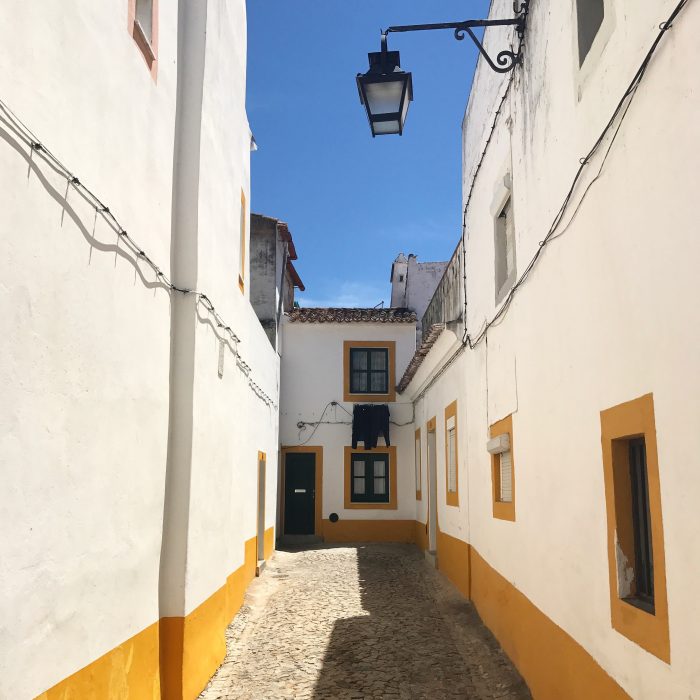 Despite it being a weekend in early June, the town was quiet. There were very few tourists around in the initial areas I walked. Later I would see a few tour buses, but even those were generally unobtrusive. Sintra is by far the most popular day trip from Lisbon, but I expected that another pretty UNESCO World Heritage Site like Évora would also draw in visitors. Instead, I had the town’s narrow alleys to myself. 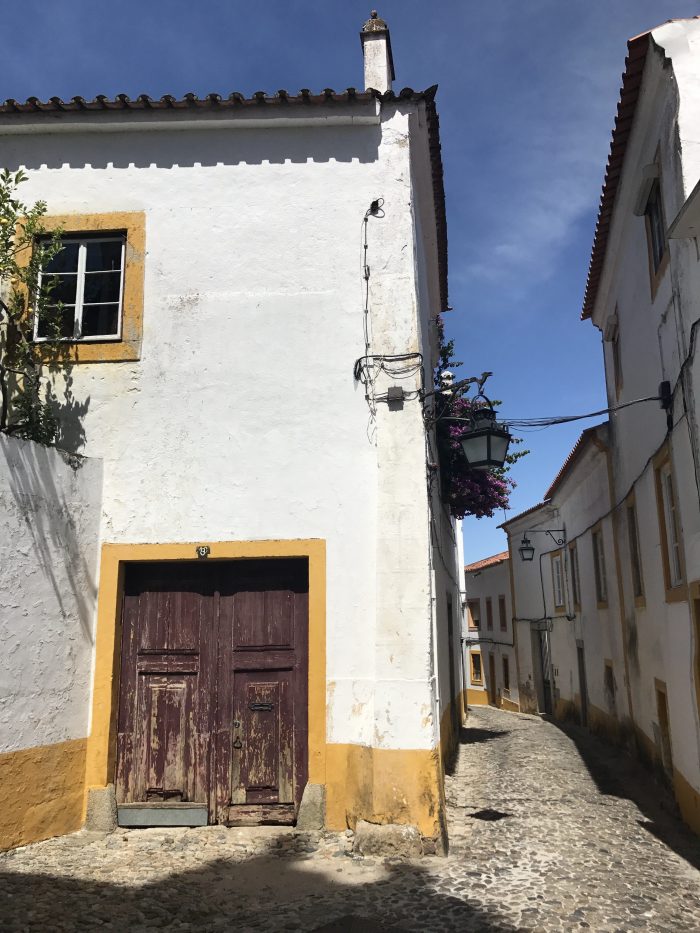 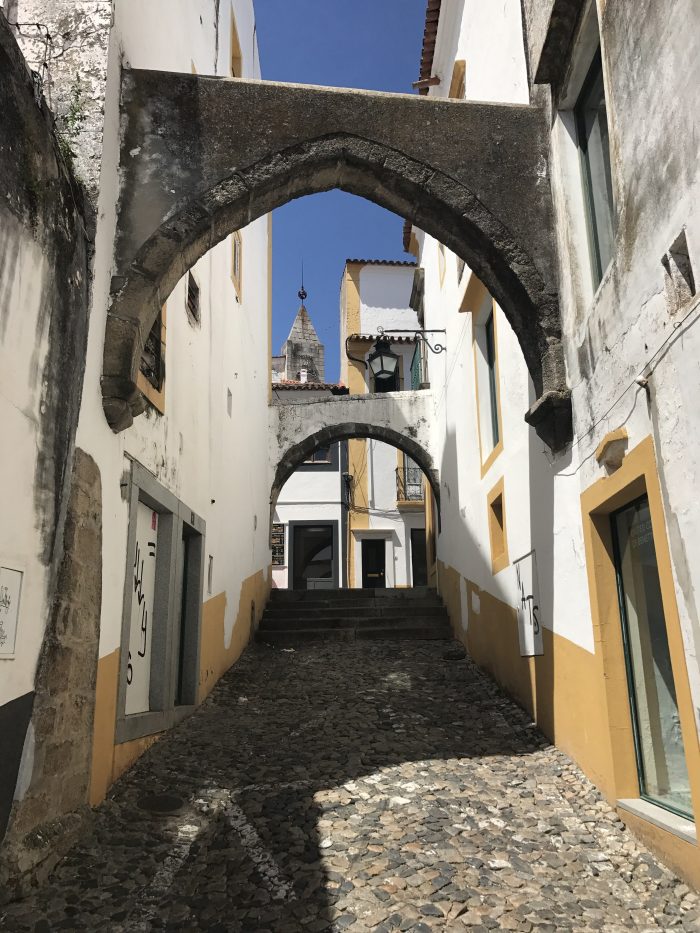 I passed the Palacio of Dom Manuel, which was closed since it was a Sunday, but the surrounding public gardens were still open. Springtime flowers were in full bloom. There were also some ruins inside the park. 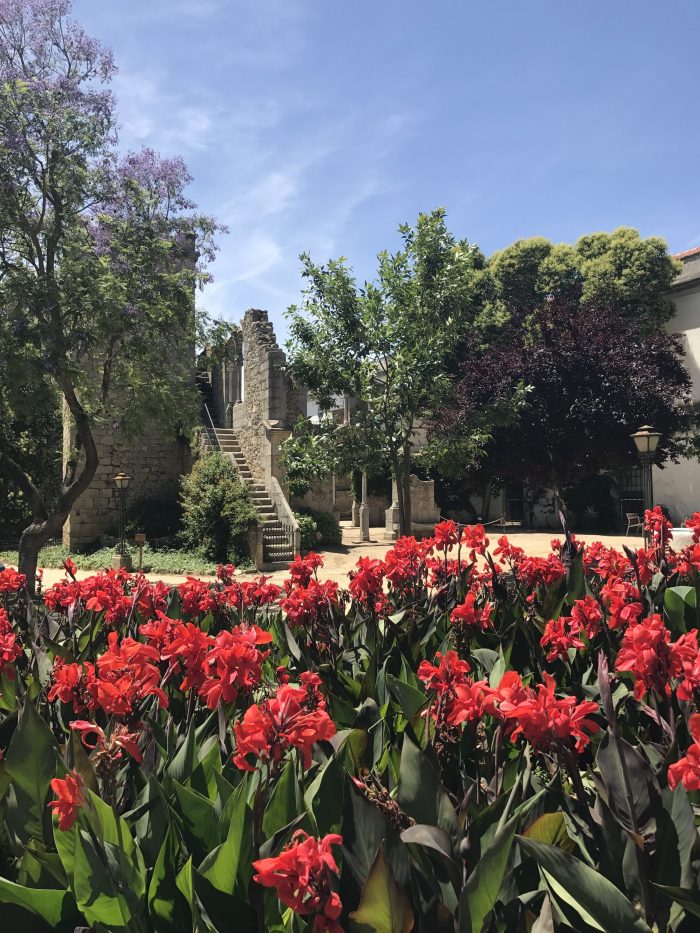 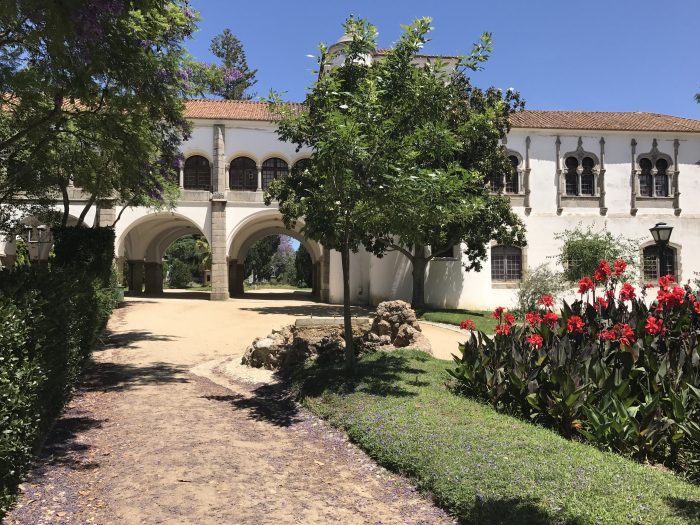 One of the highlights of Évora is the Capela dos Ossos (Chapel of Bones) in Igreja de São Francisco (Church of St. Francis). This 16th century chapel is lined with human bones. The bones were taken from local cemeteries in order to free up land for the living. Thousands of remains were relocated in order to create this chilling chapel. 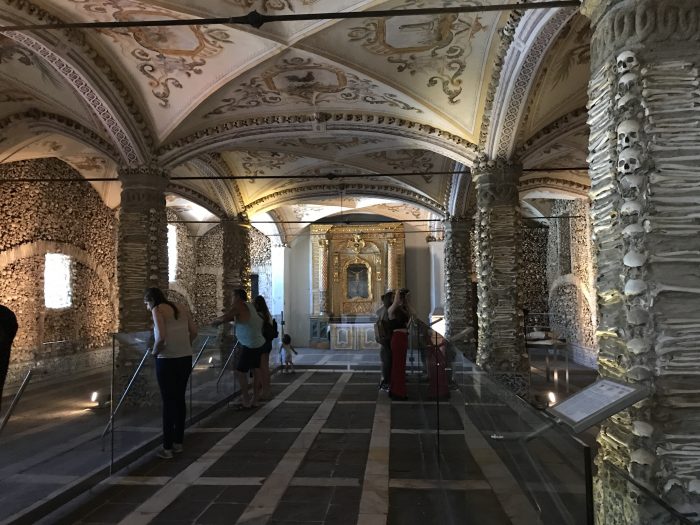 I had visited a similar Chapel of Bones in Faro, Portugal, but the Capela dos Ossos in Évora is much larger. It also draws in far more visitors, so it’s not possible to walk right up to the bones. Theft, breakage, and graffiti risks keep the church from being able to allow anyone to walk up too close. Still, it’s a fascinating place, albeit on the creepy side. 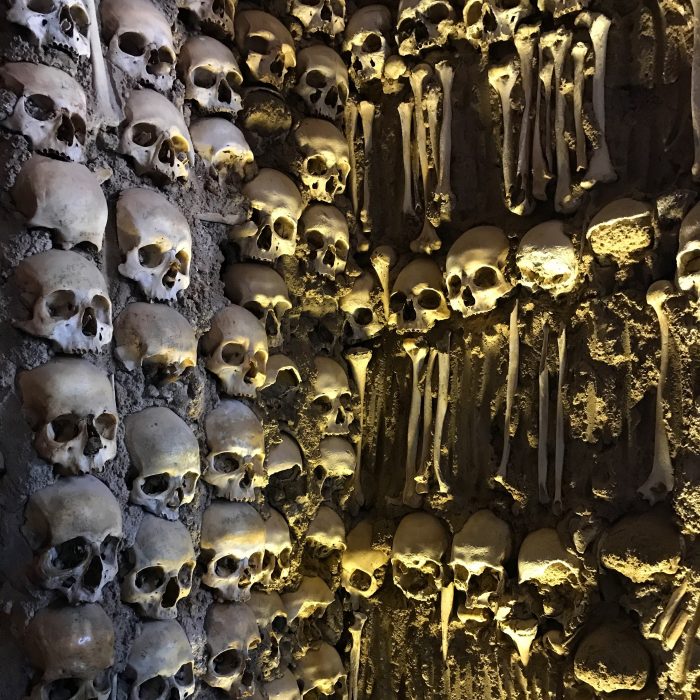 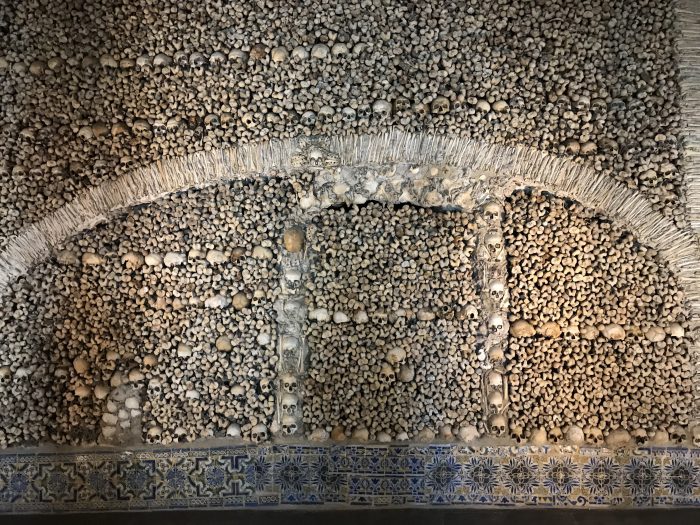 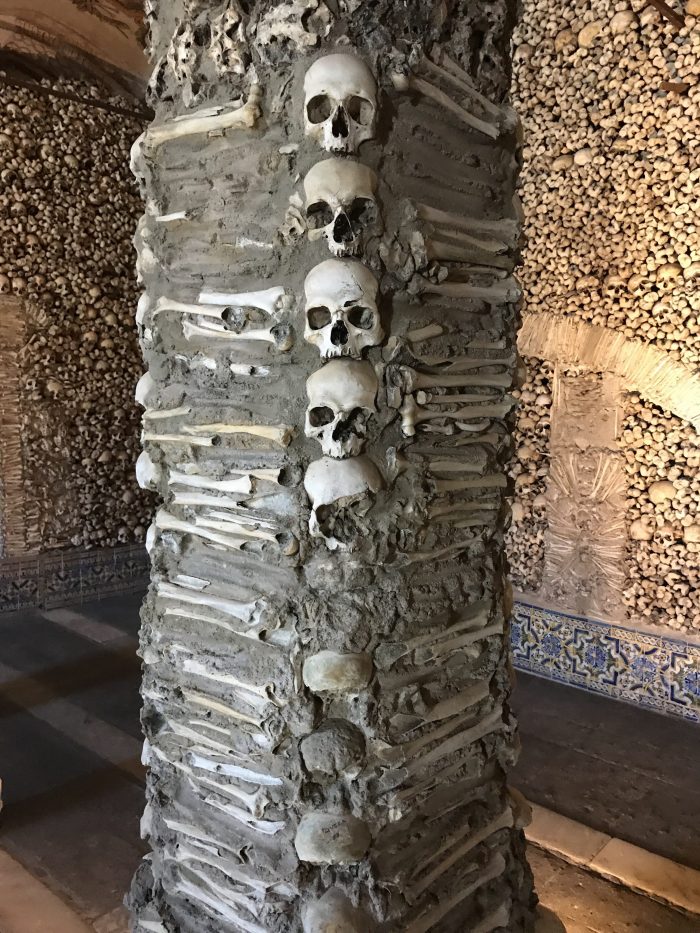 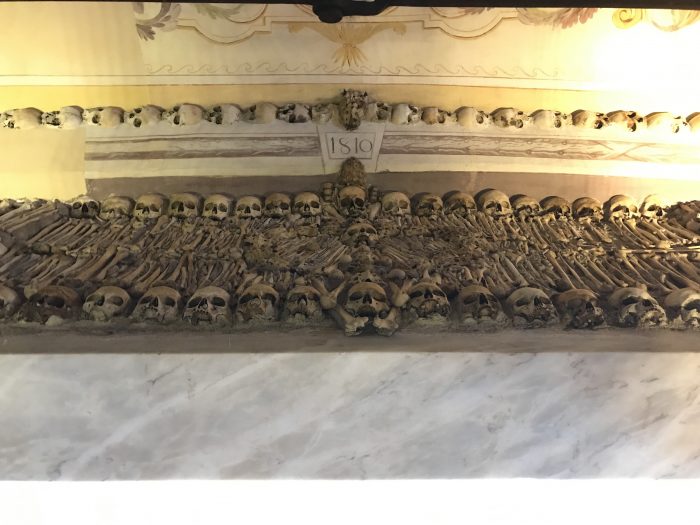 Above the entrance, a sign reads “Nós ossos que aqui estamos pelos vossos esperamos”, which translates to “We bones that here are, for yours await.” 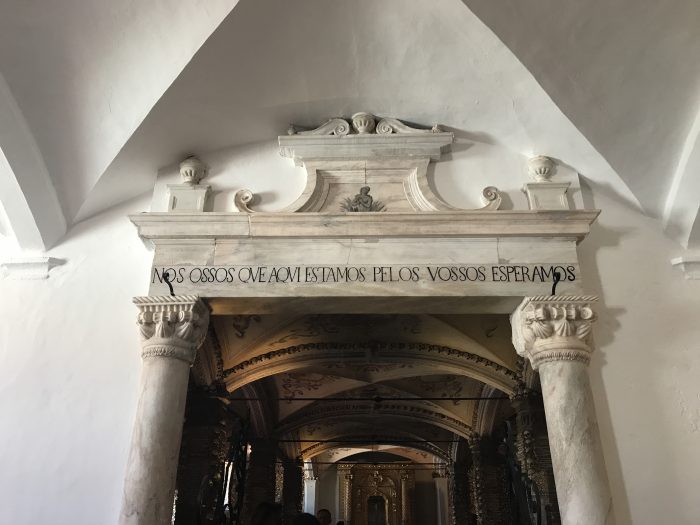 The idea of the Capela dos Ossos is to make visitors consider their own mortality & finite time on Earth. Someday, we will all be reduced to these bones.

With that positive thought in your mind, let’s move on.

In addition to the Chapel of Bones, the church also has a terrace with a view over part of the town, along with a nativity scene museum. I expected to race through the latter, but it was actually quite interesting to see the various creations from around the world. 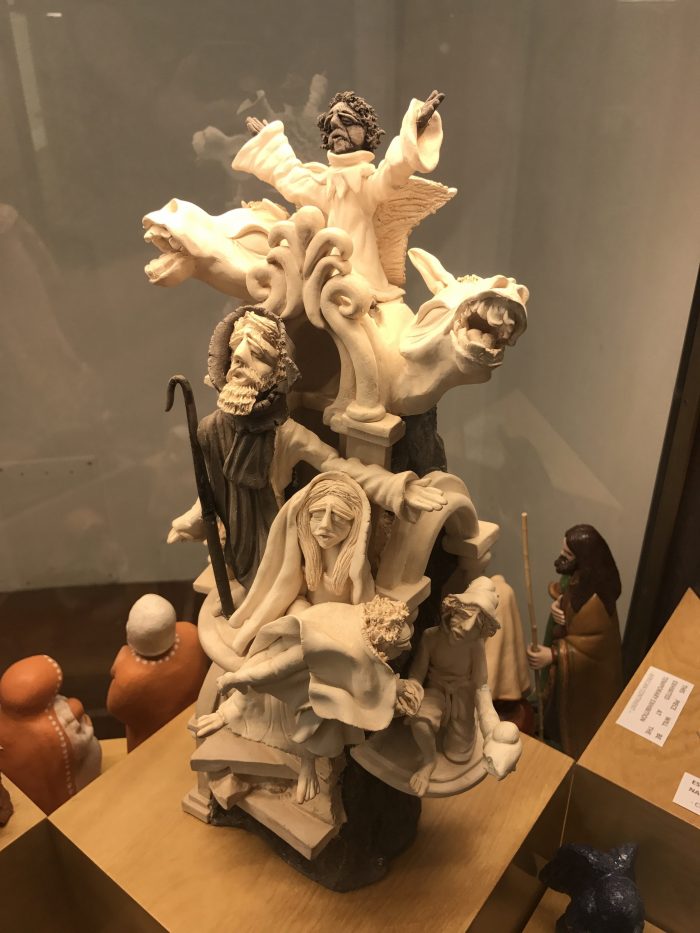 Back outside, I headed toward Évora Cathedral. The town was still quiet, save for the occasional church bells & chirping of birds. The pink & purple flowers of jacaranda trees and other plants filled the sky above. 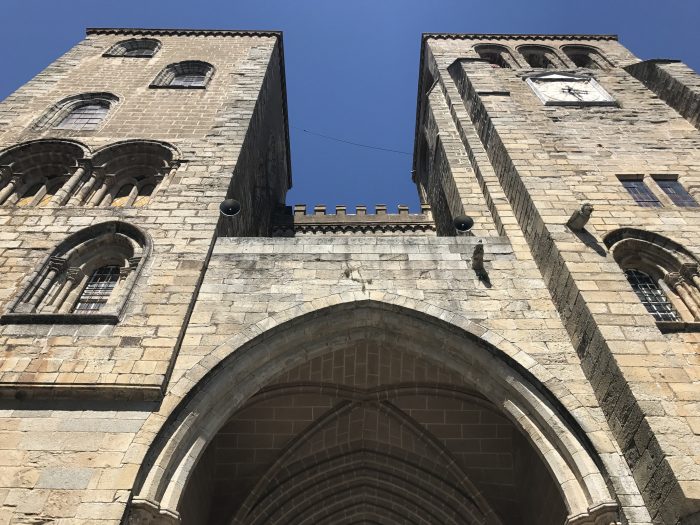 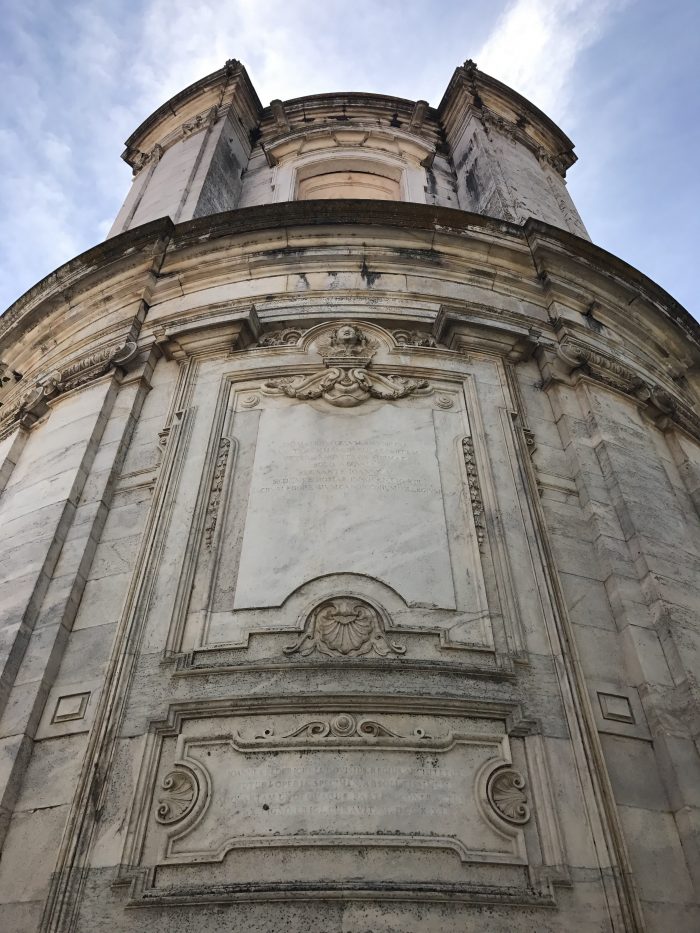 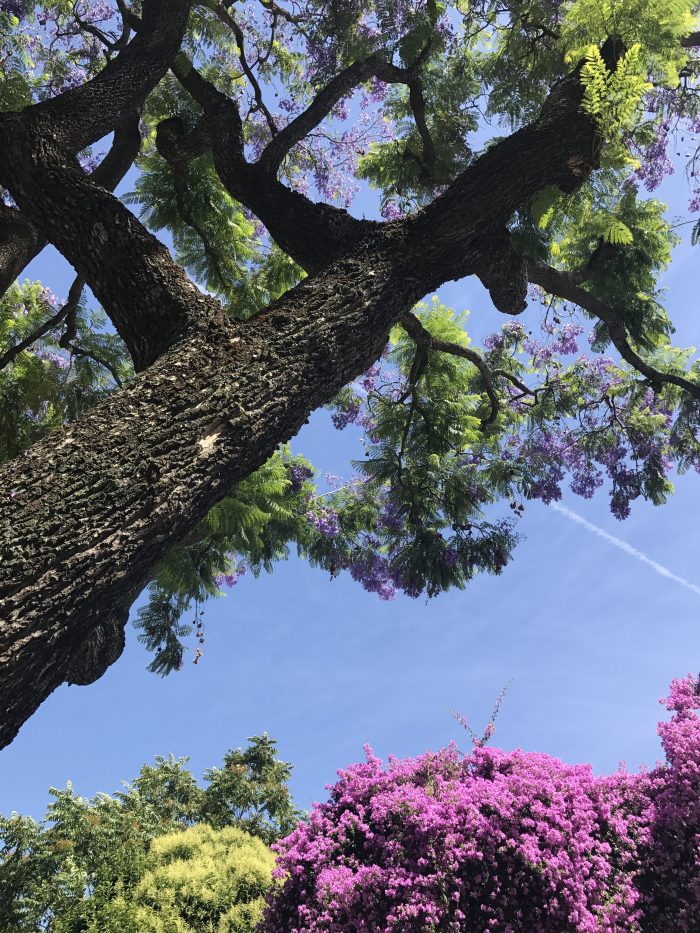 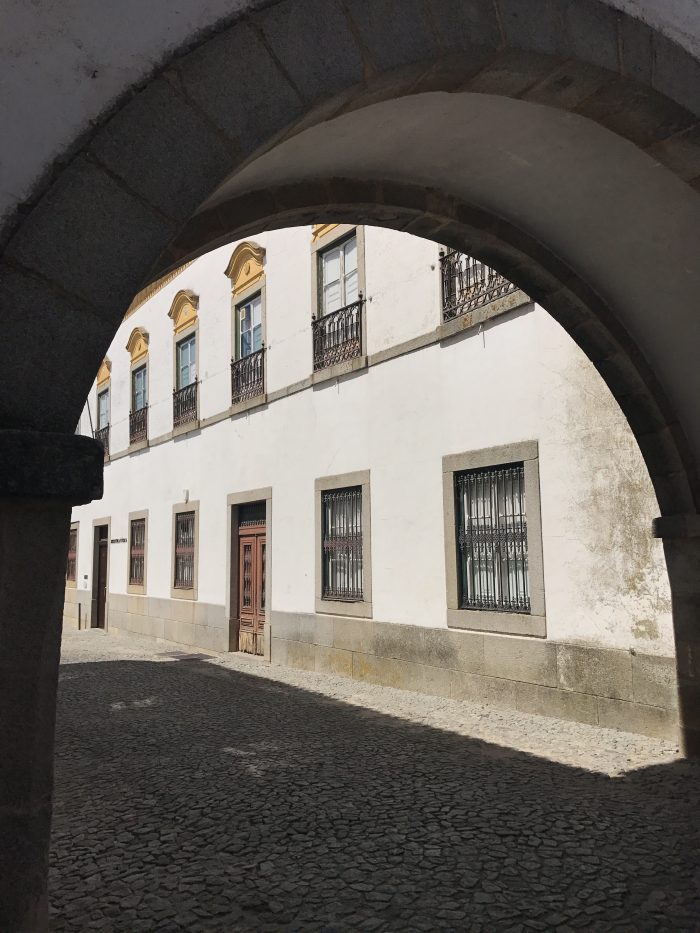 On the other side of the Cathedral sits one of the prettiest areas of Évora, which is saying a lot given the pretty alleys I’ve shown above. In this large plaza, you’ll find the ruins of a Roman Temple. 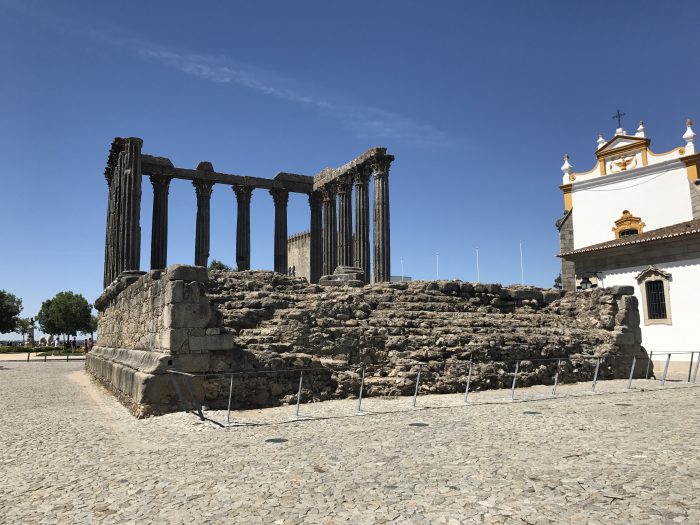 This Roman Temple was first built around the 1st Century. A series of alterations and restorations throughout the ensuing centuries has brought it to its current state. 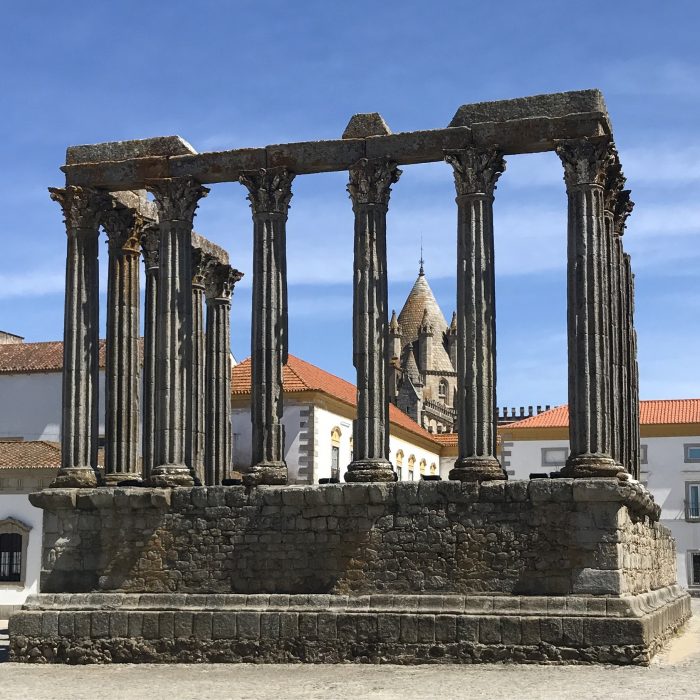 Beyond the Roman Temple, there is the rest of the plaza, including some statues and gardens. 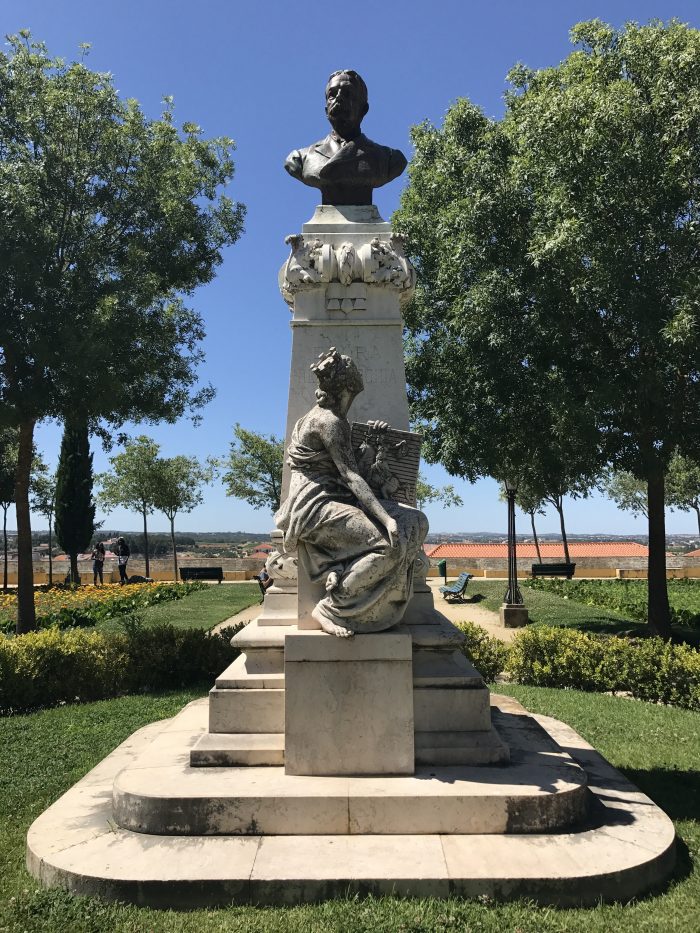 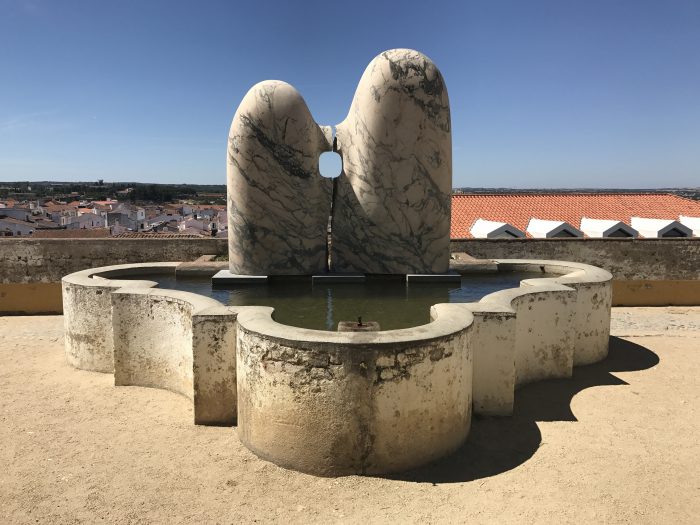 At the edge of this plaza there is a drop-off, which allows for magnificent views across the rest of Évora. 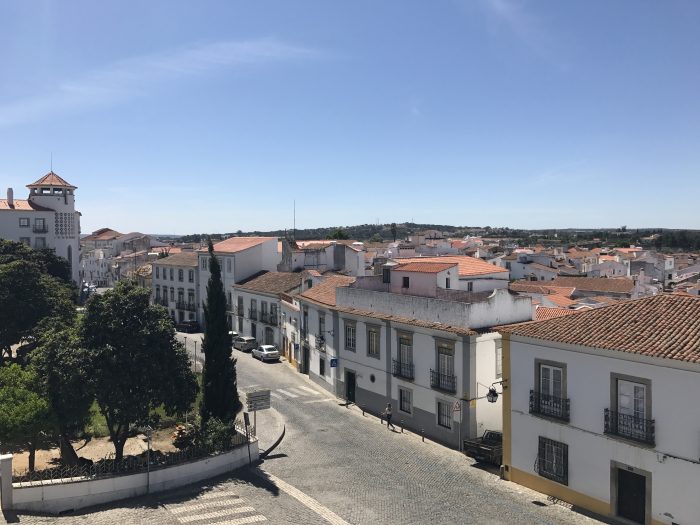 After walking around this highest point in the town, it was time to slowly make my way back to the bus station so I could get back to Lisbon. Earlier in the day, I had seen posters for a wine festival that was going on in the town. I figured a couple of glasses of local wine would be the perfect ending to my day trip to Évora. Unfortunately, this wasn’t the case. The festival area was quiet, with empty booths lining the street. Either the festival was all done, or it somehow wasn’t starting until late. I’m guessing the former, as 4pm on a Sunday would be a late start to a wine festival. At any rate, it was a bit of a disappointment to have missed out on it. I got back to the bus station with plenty of time as a result. 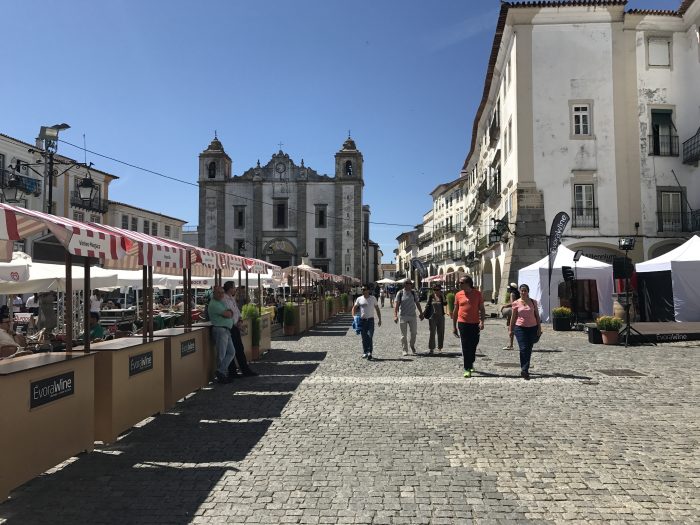 Évora is a beautiful little town. I highly recommend visiting it as a day trip from Lisbon. There’s plenty to see and do in a few hours, and unlike Lisbon & Sintra, it’s not yet overrun by tourists. Between the food, the architecture, and the unique sights like the Chapel of Bones & Roman Temple, a day trip to Évora is the perfect escape from Lisbon.