If you’ve seen photos of Rotterdam, chances are you’ve seen Erasmusbrug, the bridge spanning the Nieuwe Maas river. Just across Erasmusbrug to the south of the Rotterdam city center is an area called Kop van Zuid, which is primarily comprised of Wilhelminapier. This port district & cruise terminal has historic roots, but its recent rebirth showcases modern Rotterdam. Here is my guide to a great day out in Kop van Zuid & Wilhelminapier.

Things to do in Kop van Zuid & Wilhelminapier

If you’re planning on spending a day in Kop van Zuid & Wilhelminapier, you’ll likely arrive in one of two ways. Either you’ve traveled here on one of the cruise ships that arrives at the Rotterdam Cruise Terminal, or you’ll cross the Erasmusbrug. There’s also public transportation available, but walking across the Erasmusbrug gives you a chance to take some great photos of the bridge & the Wilhelminapier skyline. 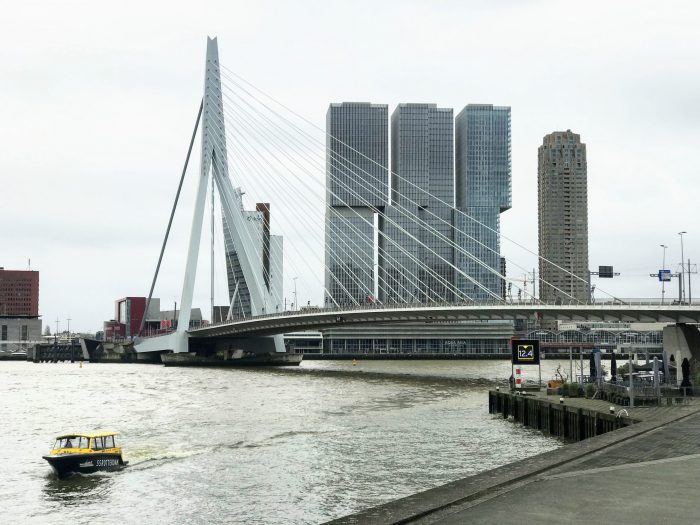 Named after Dutch philosopher Desiderius Erasmus, AKA Erasmus of Rotterdam, the Erasmusbrug is a combined cable-stayed & bascule bridge. It opened in 1996. While the Erasmusbrug hasn’t been around for a very long time, it has quickly become the most iconic view of Rotterdam. 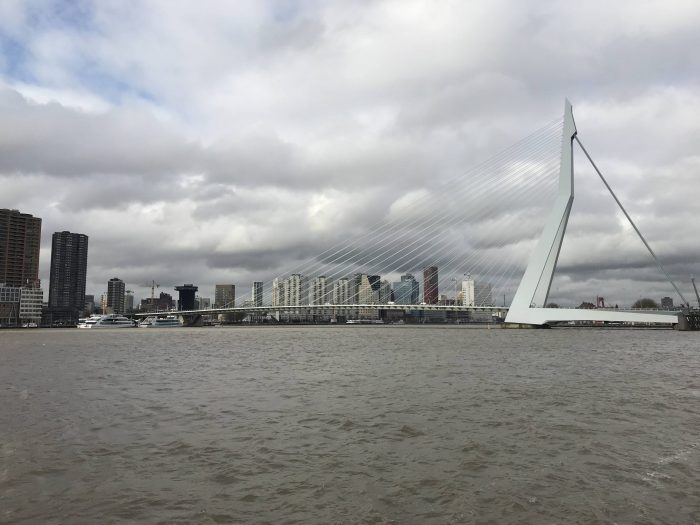 Just behind the Erasmusbrug, the skyline of Wilhelminapier looms high above. De Rotterdam building, which opened in 2013, dominates the view, along with the Renzo Piano KPN Tower, & the residential New Orleans tower, which is the 2nd tallest building in the Netherlands. The offices for the Port of Rotterdam also tower above the pier. 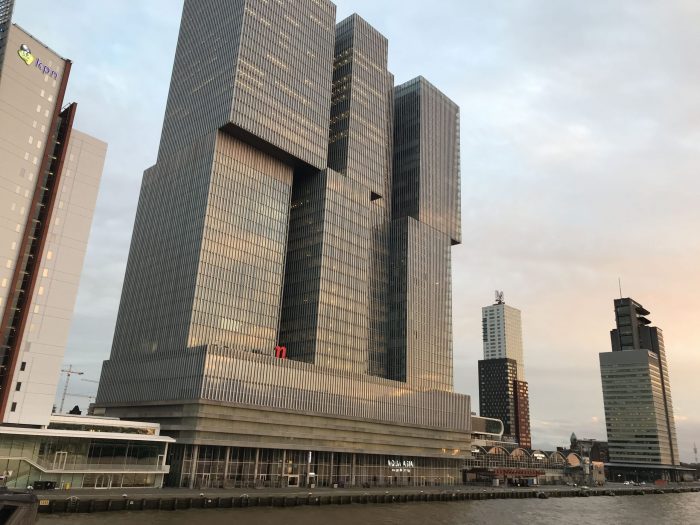 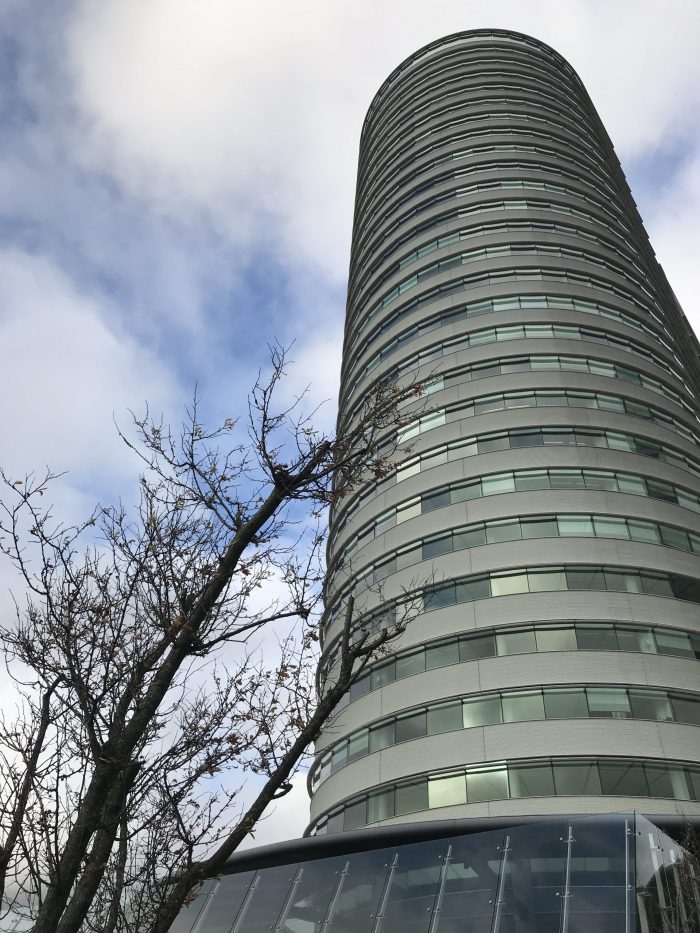 Not all of the architecture of Wilhelminapier is new, as there are also some older buildings in the area, such as the former Holland America line offices that now house the Hotel New York, as well as the old Pakhuismeesteren warehouse. 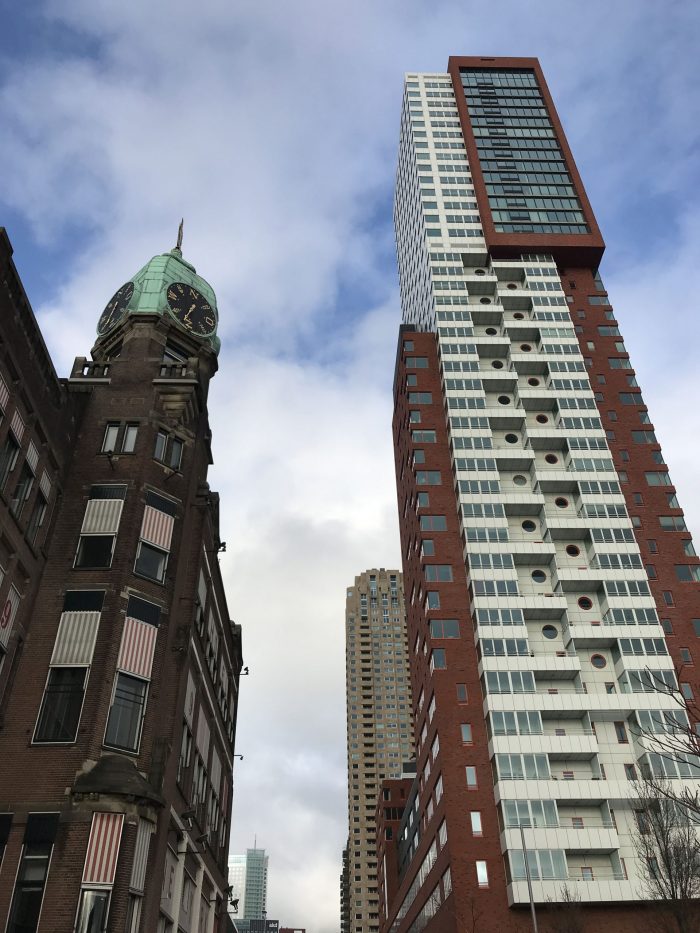 Toward the southern tip of Wilheminapier, there are open plazas that provide panoramic views of the port of Rotterdam & the city center. There is also a sculpture by Jeff Wall called “Lost Luggage Depot.” 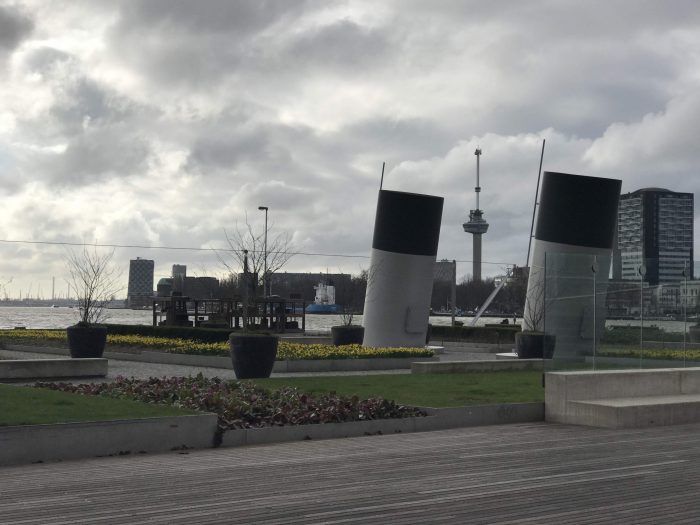 This mix of old & new architecture ties the historic past of Wilhelminapier & Kop van Zuid to the optimistic future of the city, which is the 2nd largest in the Netherlands.

The Nederlands Fotomuseum is a photography museum with rotating galleries, with a predominant focus on Dutch photography.

One recent exhibit that was worth the price of admission alone was called “De Migrant” by Anaïs López. 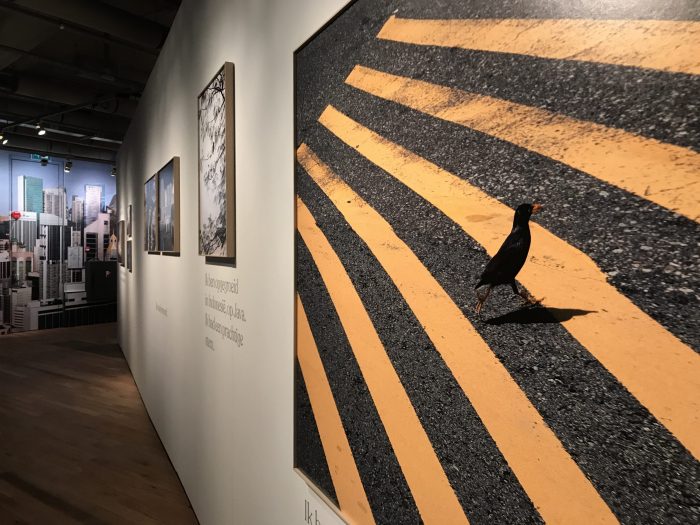 This multimedia gallery tells the story of the photographer’s encounter with mynah birds, which were brought from Java to Singapore, but are now seen as an annoyance by some. Words can’t convey how moving it all was, especially the comic section. 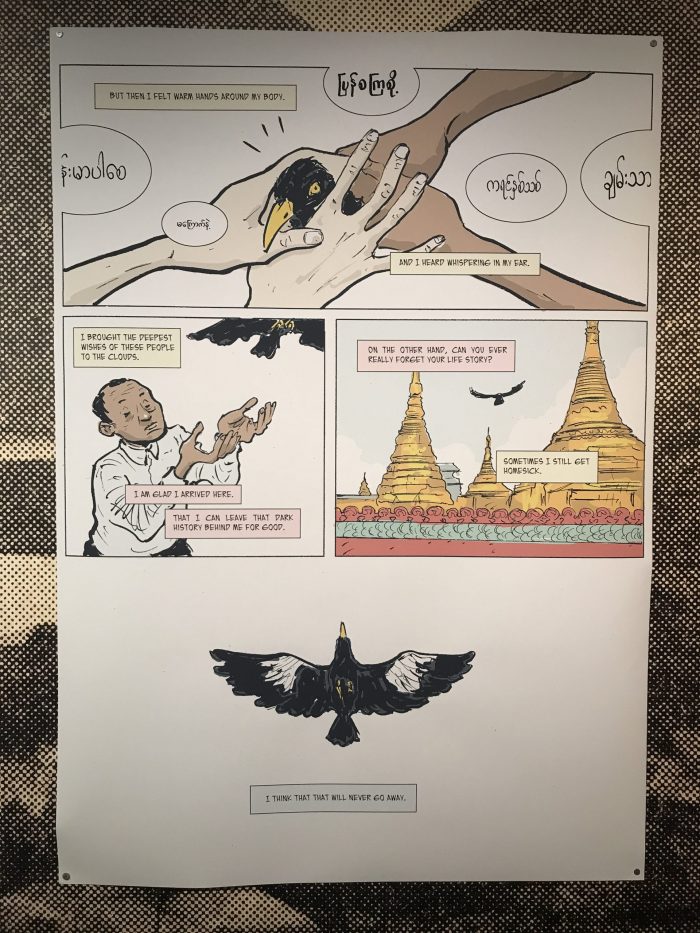 The addition of the quiet music playing and sounds of birds chirping & singing nearly moved me to tears. There’s a website for “De Migrant” where you can get a taste of the experience for yourself.

Other recent exhibitions have included photos of migration & a changing Rotterdam by Marwan Magroun, Tall Stories, and a gallery of Nudes.

Just across the Rijnhavenbrug from Wilhelminapier is an up-and-coming neighborhood called Katendrecht. In this area, you’ll find bars & restaurants, as well as the newly relocated Fenix Food Market & De Kaapse Brouwers. 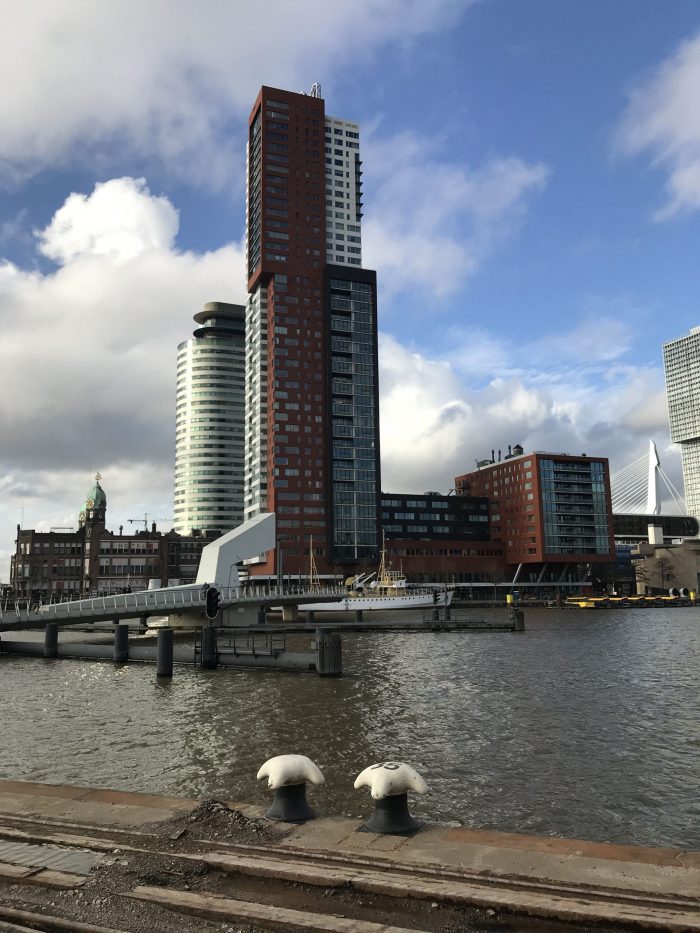 Where to eat & drink in Kop van Zuid & Wilhelminapier

Foodhalllen Rotterdam is a huge food hall located in the center of Wilhelminapier.  The food hall inhabits the Pakhuismeesteren, a former tea warehouse of the Dutch East India Company. It’s home to 15 food stands, as well as a full bar that also serves local craft beer.

Whatever food you’re craving, you can find it at Foodhallen Rotterdam. There are cuisines from all over the world, including BBQ, burgers, Spanish, Indonesian, Vietnamese, Mexican, Latin American, seafood, dim sum, a bakery, and more.

This is a pulled pork sandwich from Roffa, along with a local Rotterdam craft beer. 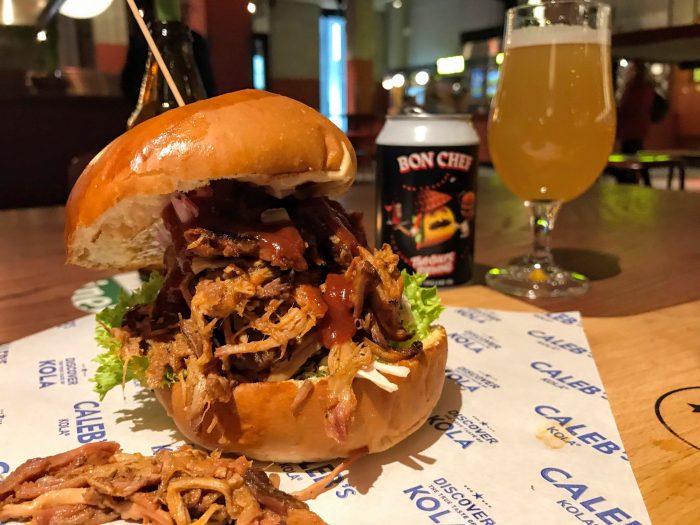 For dessert, try a salted caramel cupcake from Ten to Three. 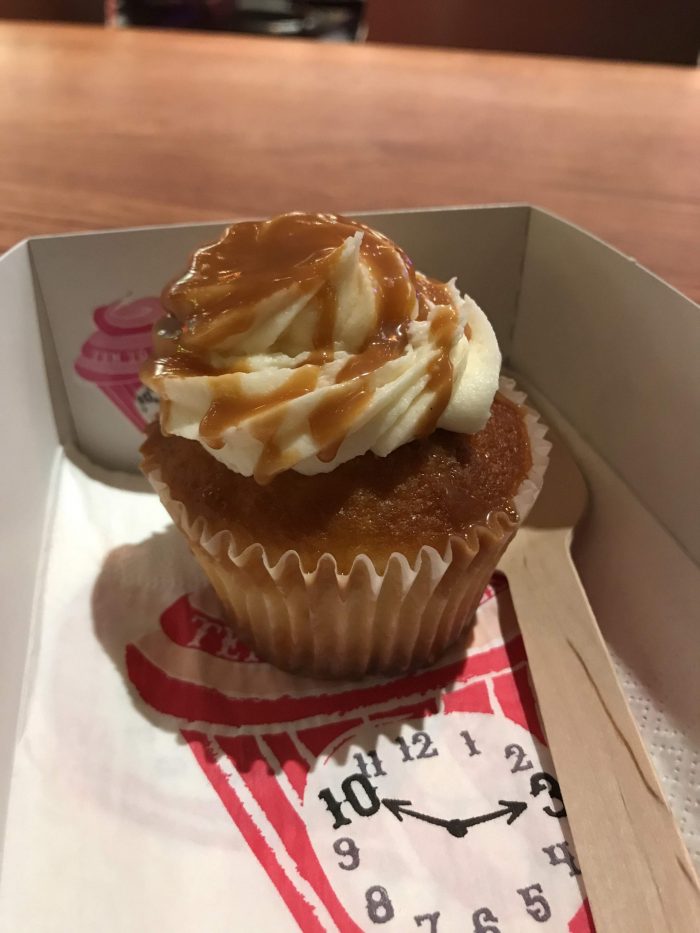 NY Basement is a fantastic cocktail bar & restaurant located in the basement of the Hotel New York. It features some of the best cocktails in Rotterdam, served in an atmosphere that takes you back to the heyday of the old Holland America port. 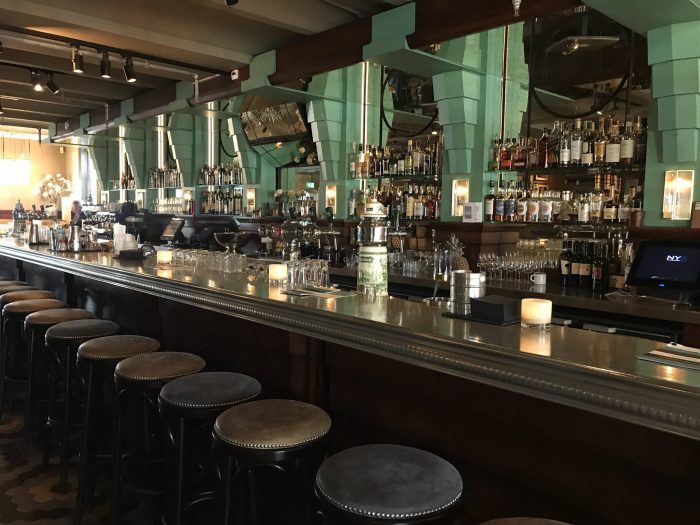 On the 7th floor of the nhow Rotterdam Hotel, there is a balcony bar that provides gorgeous views of Kop van Zuid & Wilhelminapier, as well as central Rotterdam.

Where to stay in Kop van Zuid & Wilhelminapier

Hotel New York is located in a gorgeous old building that used to be the offices of the Holland America line. This is the place to stay if you want to step back into history while still treating yourself to a 4-star hotel experience.

The nhow Rotterdam is impossible to miss as you enter Wilhelminapier. The massive De Rotterdam building that houses it dominates the skyline. Inside, there’s a hip, modern hotel with some of the best views of the city, along with the aforementioned rooftop bar.

The Room Mate Bruno Hotel is a luxury boutique hotel located in the Pakhuismeesteren, right next to Foodhallen.

Interested in a tour of Rotterdam? Here are some options: 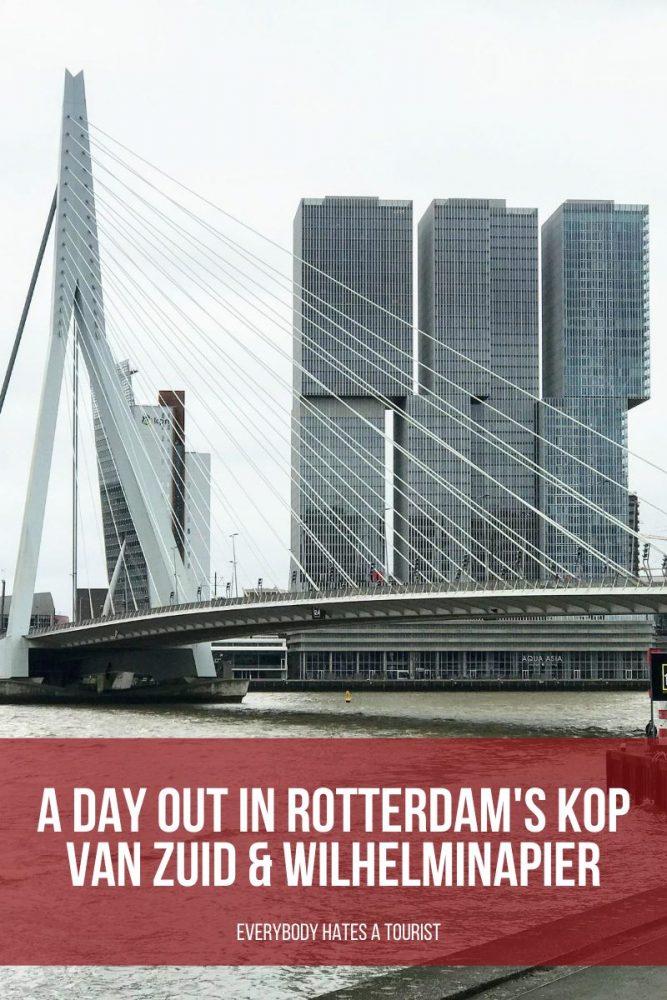