At some point, most travelers will end up making a connection in Frankfurt. But beyond the airport, what is there to see and do? On my way back home from Portugal, I decided to spend a couple of nights in Frankfurt to see what the city had to offer.

The Guide to a 24 Hour Layover in Frankfurt

Where to stay during a layover in Frankfurt

Alternatively, you can stay in central Frankfurt. Trains between there and the airport are quick and frequent. When I visited, tickets cost €4.80 each way. You’ll likely want to go into the Frankfurt city center during your layover anyway, so these hotels are attractive options to save some money. I found cheaper hotel deals in the city center when I had my layover. I actually stayed in two different hotels, the Comfort Hotel Frankfurt Central Station, and the Clarion Collection Frankfurt Central Station, since Choice Hotels was running a promotion that rewarded per stay. Both were similarly priced, though I found the Clarion Collection hotel to be much nicer.

What to do on a layover in Frankfurt

One thing to note is that the area of the Frankfurt city center near the train station is seedy as hell. It’s one of the largest red light districts in the world. While the area is undergoing some change for the better, keep this in mind. For some, this could be a positive. For most others, it could be a big turn-off. I spent as little time as possible around my hotel because the area was just sad. 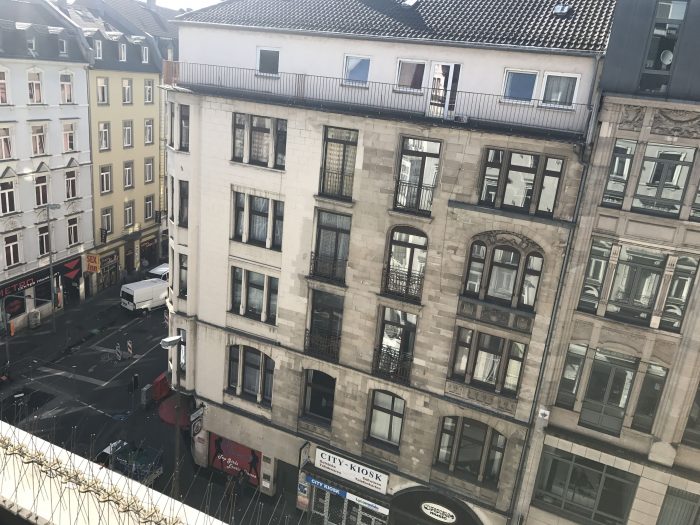 On my first afternoon & evening in Frankfurt, I explored the city’s small craft beer scene, which is scattered throughout. Read more about my experience with craft beer in Frankfurt here. Frankfurt has more skyscrapers than most other cities in Europe, so it felt more like an American city in some places. The area around the opera house was the prettiest I found in Frankfurt. 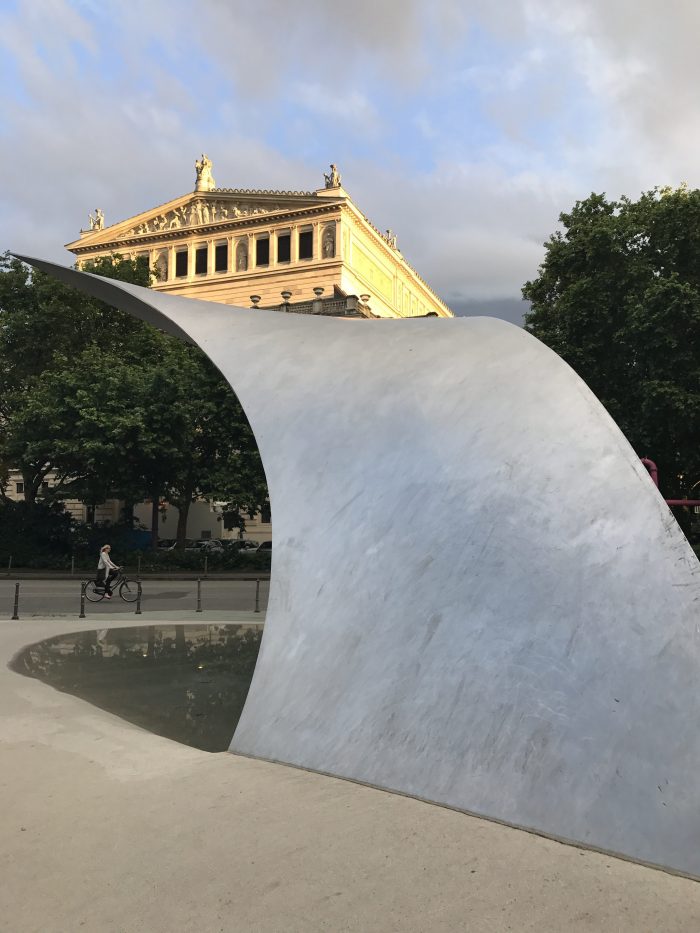 The next morning, I woke up early, since there were a few more areas of Frankfurt that I wanted to visit on my layover before I had to return to the airport early the following morning.

My morning started by heading across the Main River. There are a couple of pedestrian bridges that lead over to the south bank which is known as the Museum Embankment. 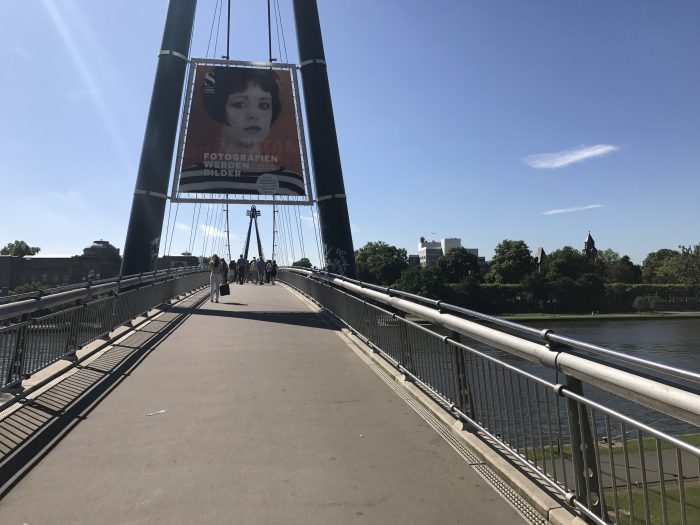 There are several interesting museums on the south side of the Main in Frankfurt, including the Städel Museum, the Museum Giersch, the Liebieghaus sculpture museum, the Museum for Communication, the Deutsches Filmmuseum, the Museum of Applied Art, the Museum of World Cultures and the Deutsches Architekturmuseum. It’s one of the most impressive concentrations of museums that you’ll find anywhere in the world. The museums aren’t necessarily huge, but there’s a good variety to suit any visitor on a layover. This was my favorite area of the city for getting an experience that was uniquely Frankfurt.

It was a gorgeous day, and I didn’t want to spend all of it indoors, so I chose to only visit the Städel Museum. The Städel Museum features European art ranging from the Middle Ages all the way to the modern day. The collection predominantly had Flemish & German works. Entry is a bit steep at €14, but it’s a huge place. Given the breadth of the collections, you can choose to view it as 3 museums in one, if that makes it easier. 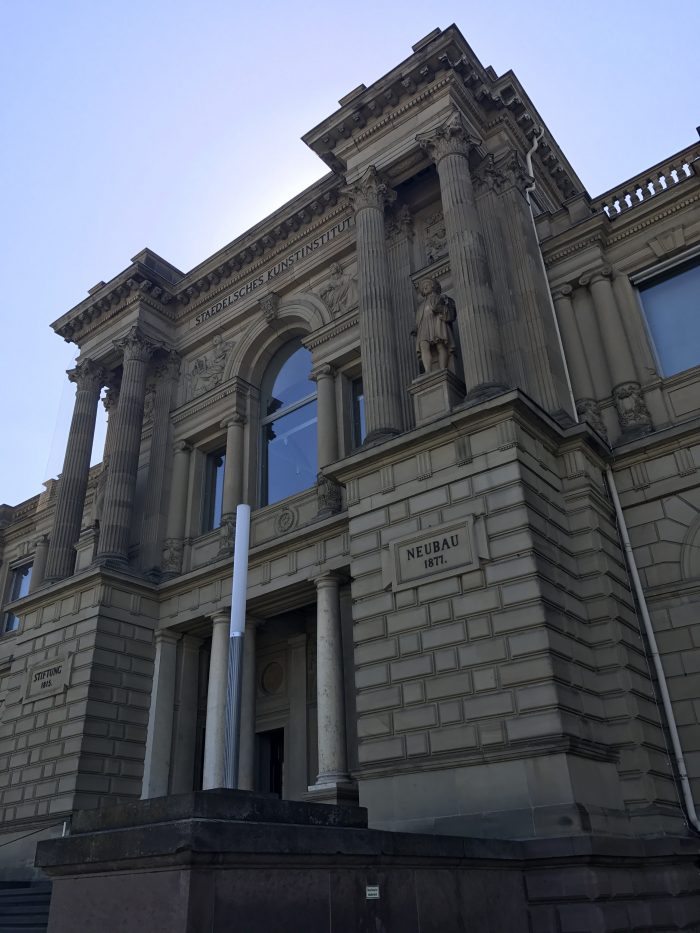 I didn’t spend much time looking at the older works, since that period doesn’t do much for me. However, there was one particularly interesting room in this gallery that showed the backs of paintings. It’s not something you normally get to see in a museum, so that was cool. 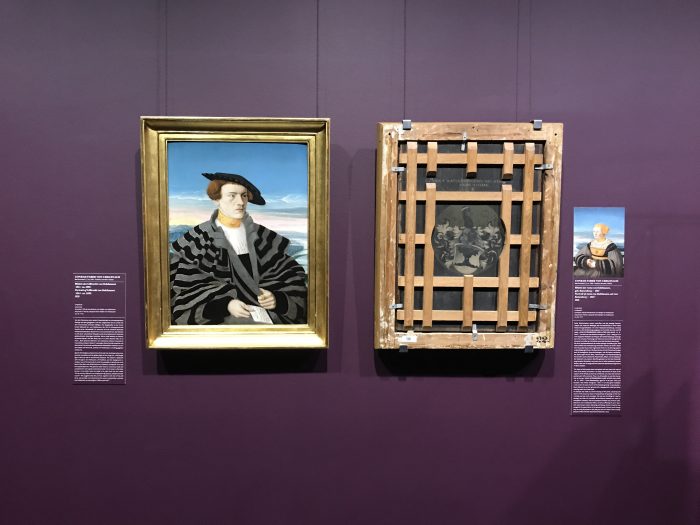 The contemporary portion of the Städel Museum consisted of a couple of massive rooms, one of which had a mirror wall. This reflected the colorful other pieces, tying everything together. 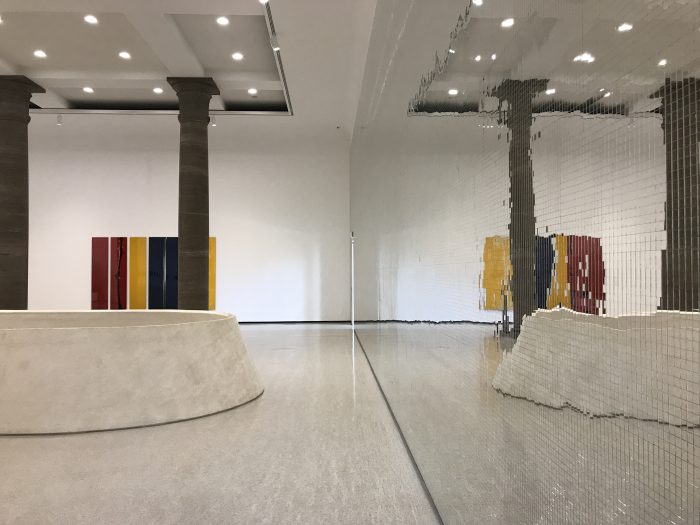 After visiting the Städel Museum, I walked along the Main River for a while. Along with the museums, it’s the loveliest part of Frankfurt. Once you’re away from the red light district, there are some nice parts of Frankfurt. 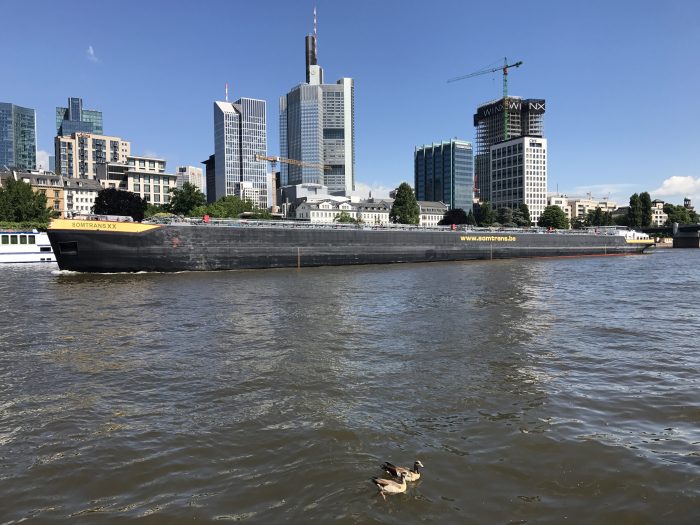 Lots of people were out enjoying the sunshine, since it was a warm Saturday. There are plenty of grassy areas along the water, plus a few beer gardens. Of course there are, it’s Germany. 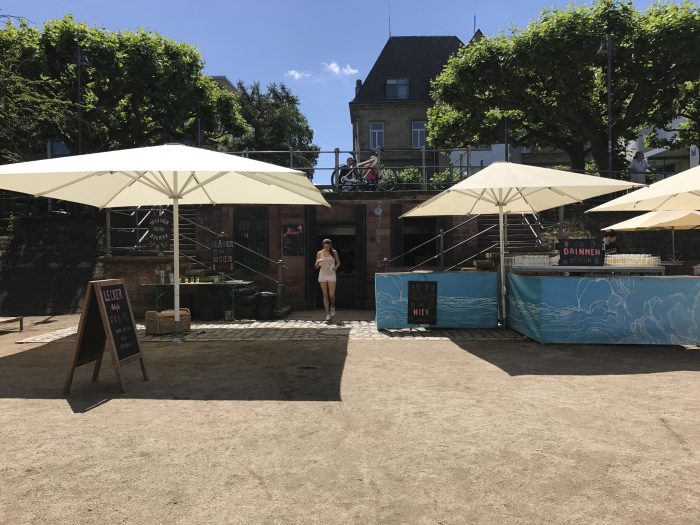 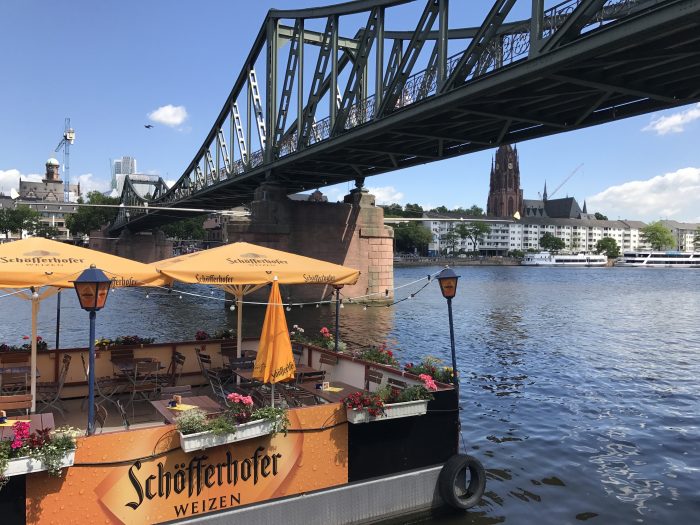 I then crossed the Iron Bridge (Eiserner Steg) and headed for another popular area of Frankfurt, Römerberg. In this historic square you’ll find reconstructed buildings, as well as the Frankfurt Town Hall. It’s the most “traditional” German area you’ll find in Frankfurt, which otherwise feels more generically modern. 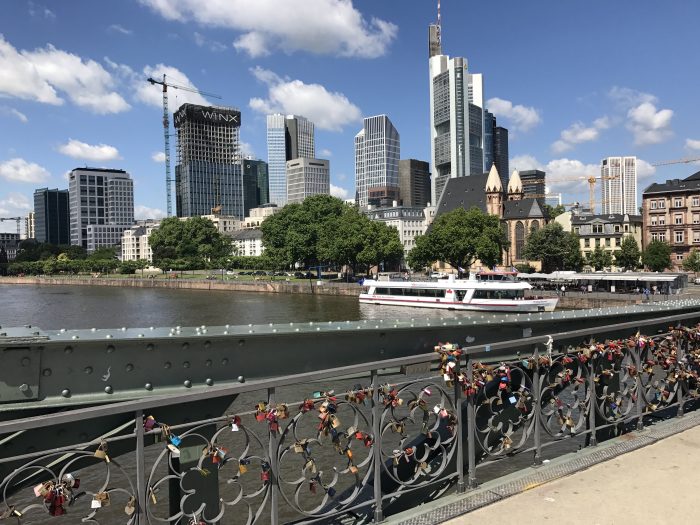 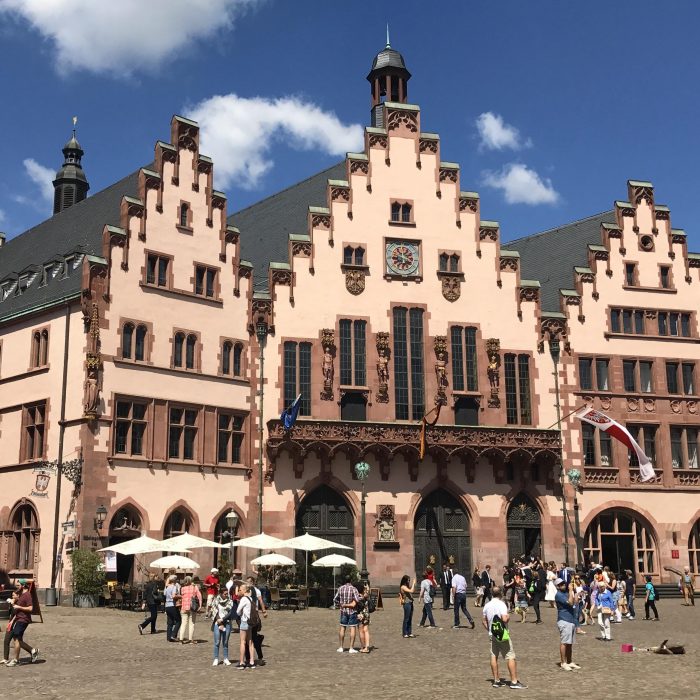 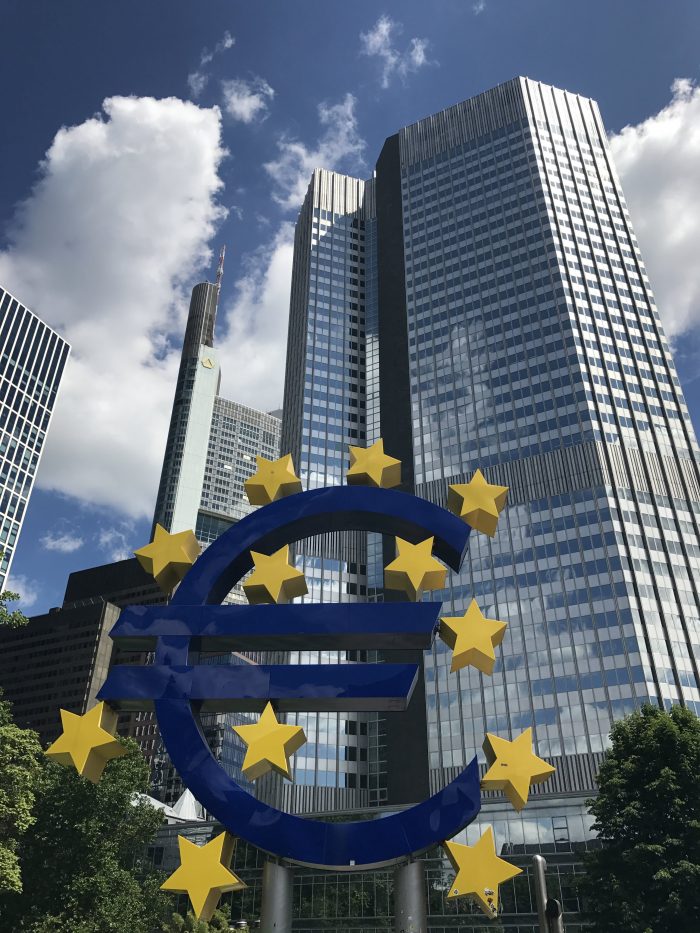 After spending the morning and early afternoon at the museum and walking around, I then spent the rest of the day finding more craft beer. I also had a great burger at naïv, a beer spot with a nice outdoor patio. 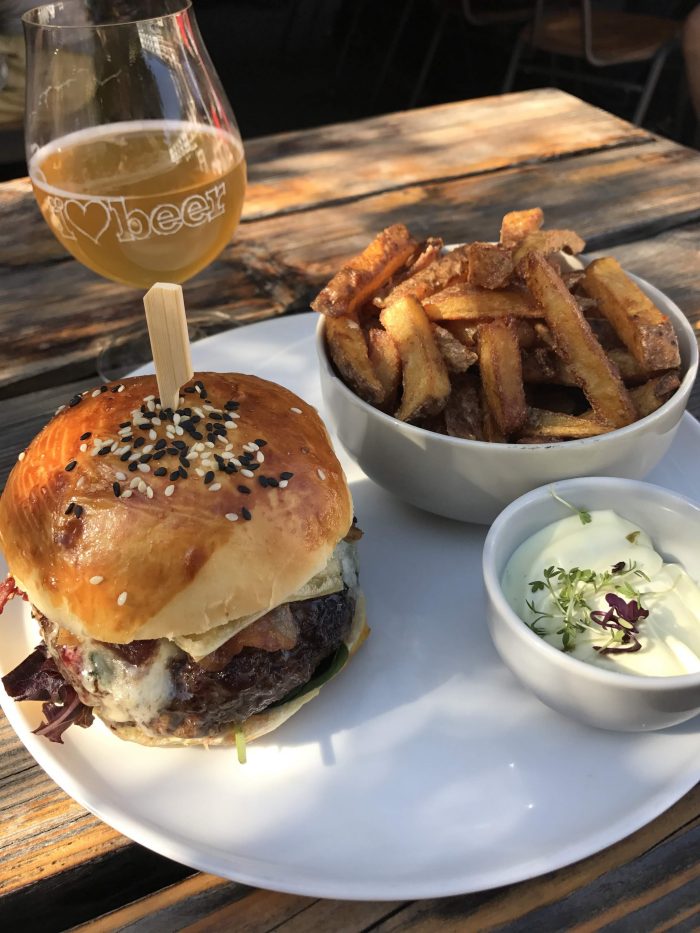 Central Frankfurt might not immediately seem like the most exciting place for a layover, but there are enough things to do that it’s a pleasant enough place to spend a day or two, especially if the weather is nice. If the weather isn’t good, then you can just spend more time in all of the museums. Thanks to convenient access to and from the airport, a layover in Frankfurt is easy, whether you just have a few hours, or an entire day or two. 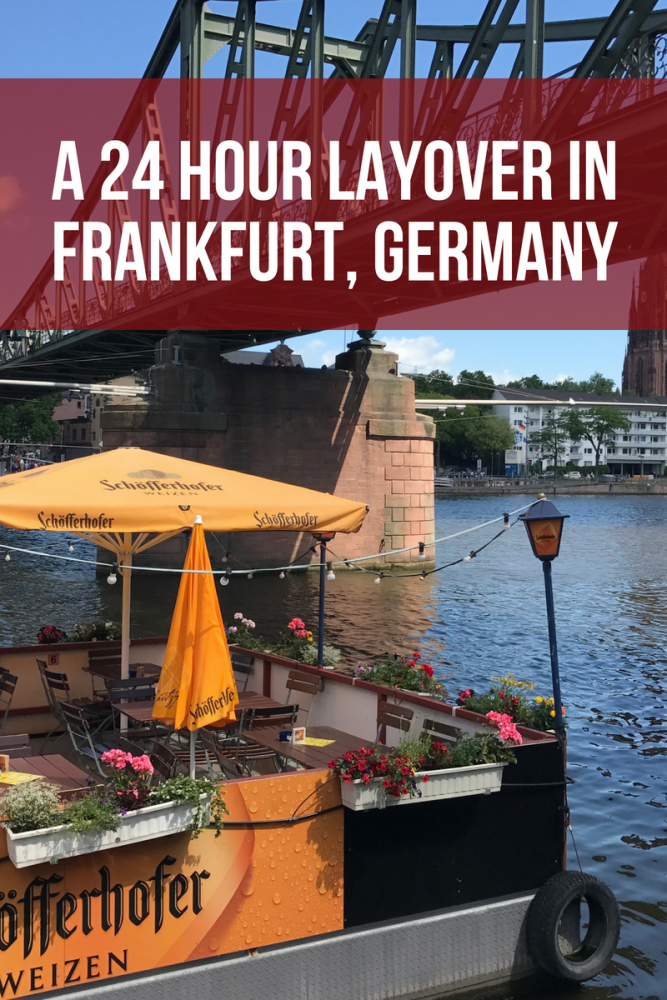