Ever since I was a little kid, I always wanted to fly in the “bubble” of the Boeing 747. It’s the most iconic plane ever built; a majestic feat of engineering. Yes, the 747 is not the newest or the best plane, but it will always hold an important place in aviation history. Thanks to a business class award ticket booked through United, I was able to fly in Lufthansa business class on a Boeing 747-400 from Denver to Frankfurt. 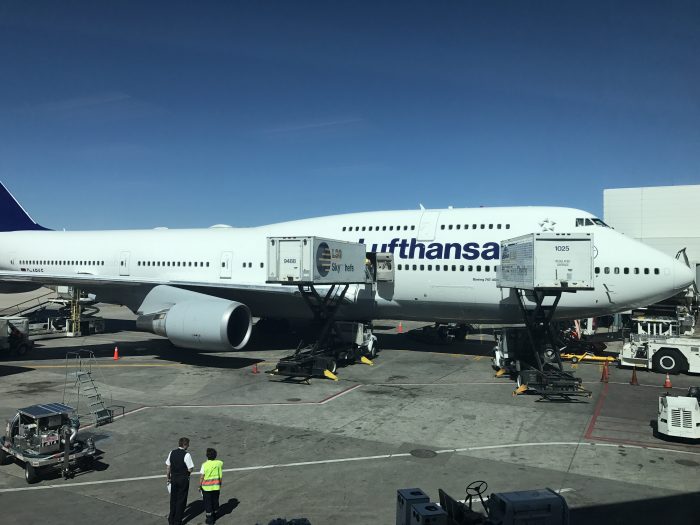 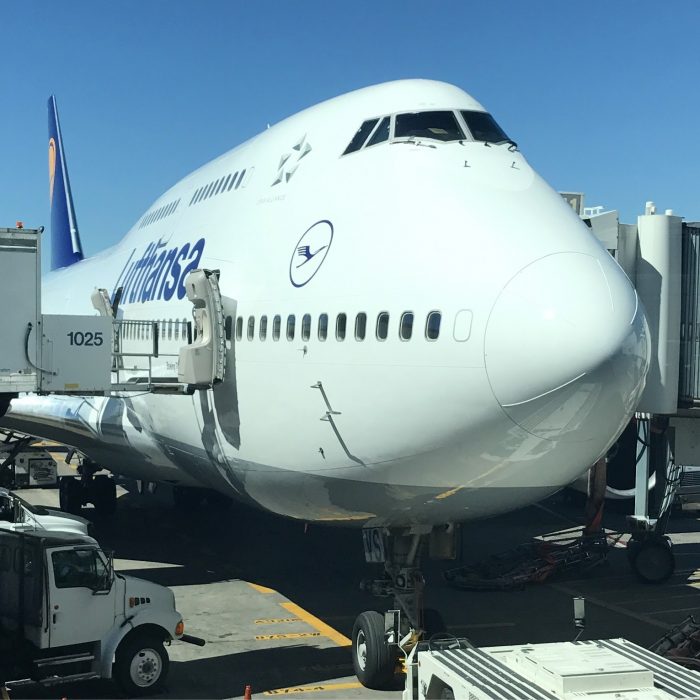 My seat was 81A, which is the first row of the upper deck. The business class bubble on Lufthansa is in a 2-2 configuration. 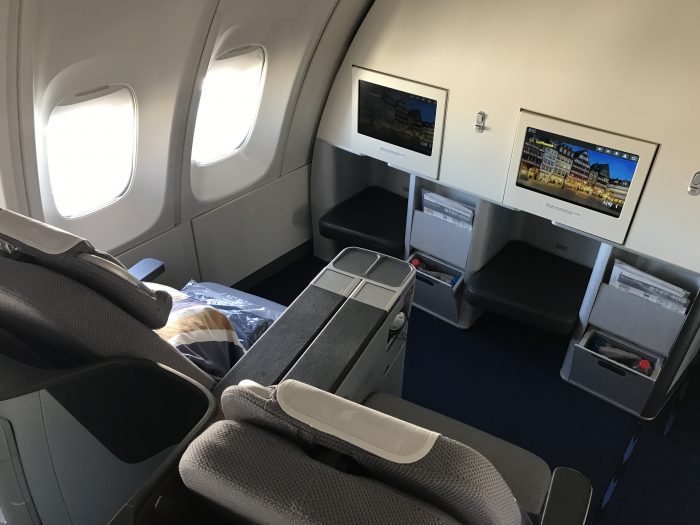 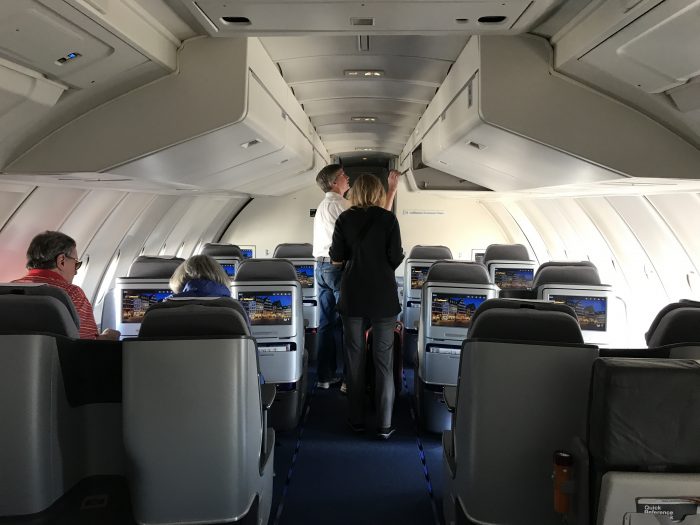 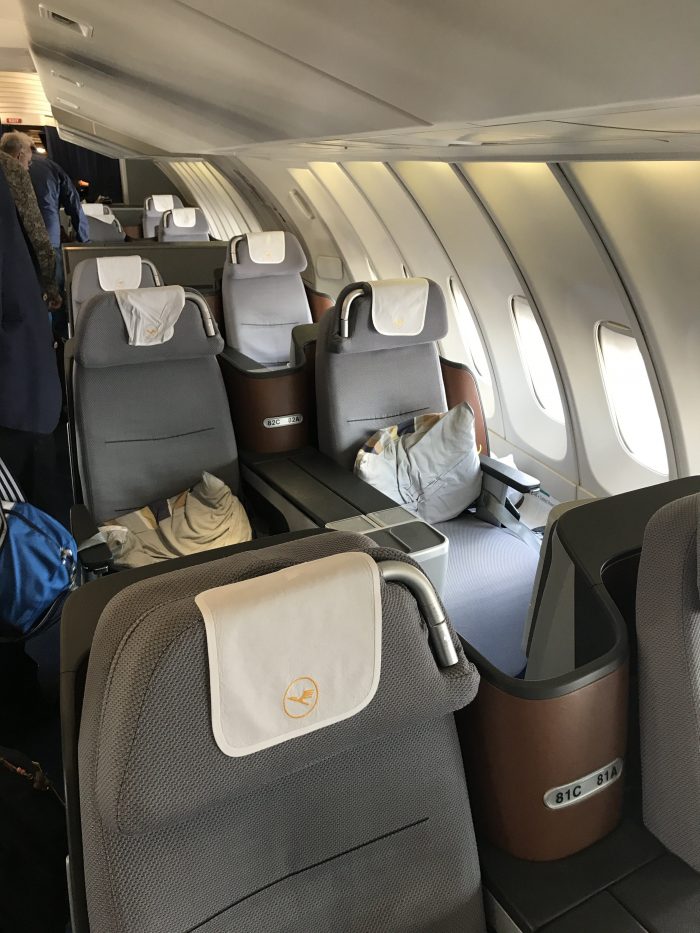 The Lufthansa business class seats are lie flat, but you do have to climb over someone if you have the window seat. It’s not a huge deal, but it’s not always an easy maneuver. 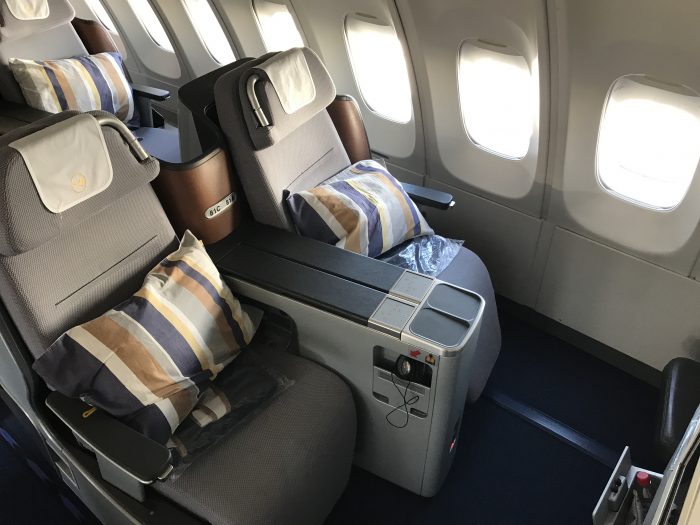 The top of the seat moves up, which is an underrated element. Perhaps this might seem cheap on a business class seat, but I like being able to customize my comfort. 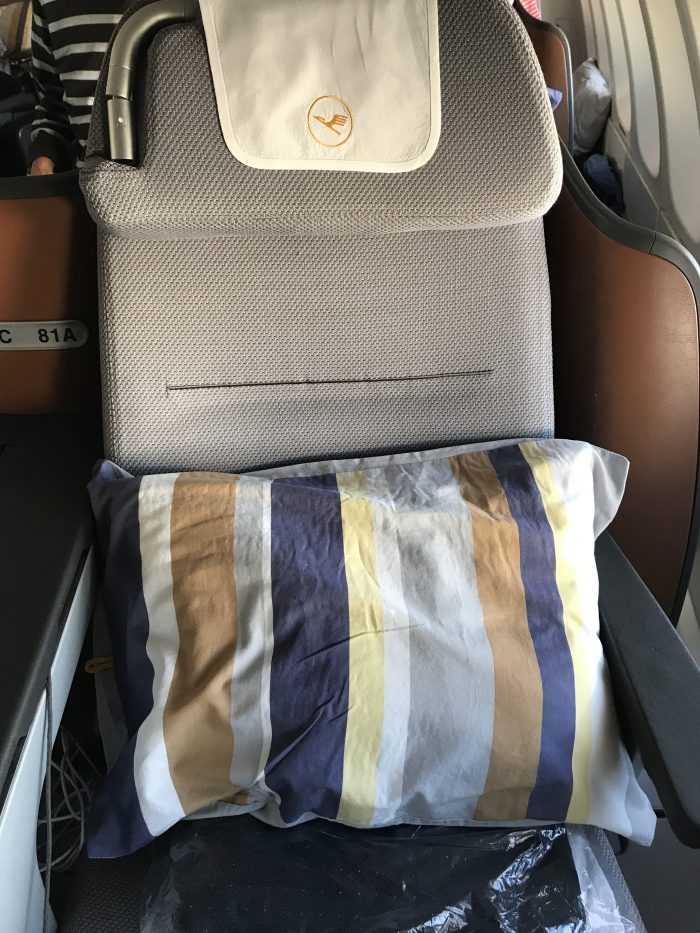 A bottle of water & an amenity kit were waiting at the seat when I boarded. The amenity kit was in a nice Jilsander Navy bag, which was waterproof. I rarely take amenity kits these days, but this was a nice bag to grab. Inside there wasn’t anything special, but the basics were covered. 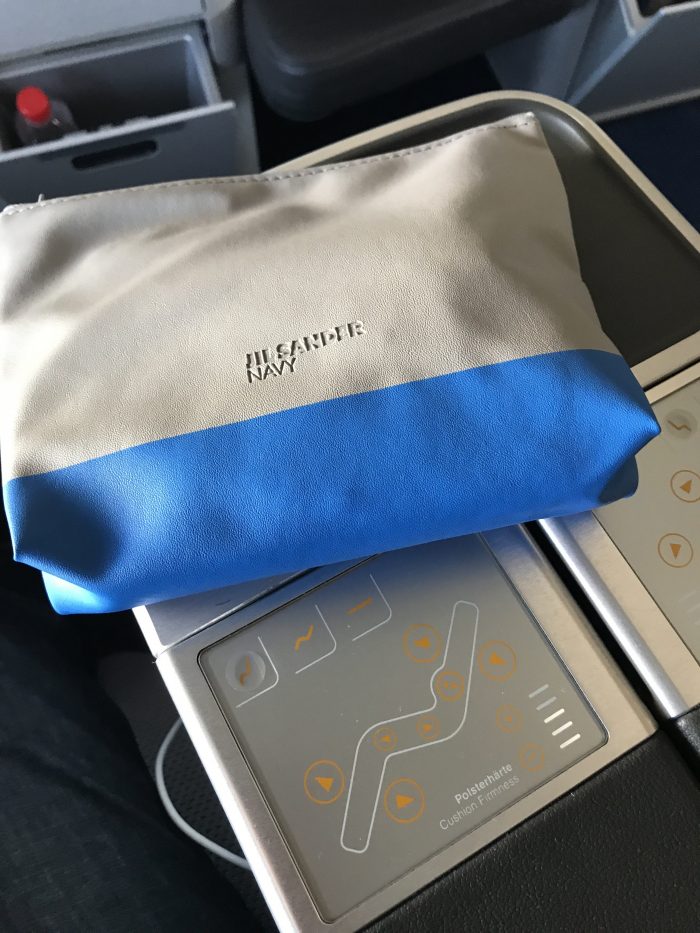 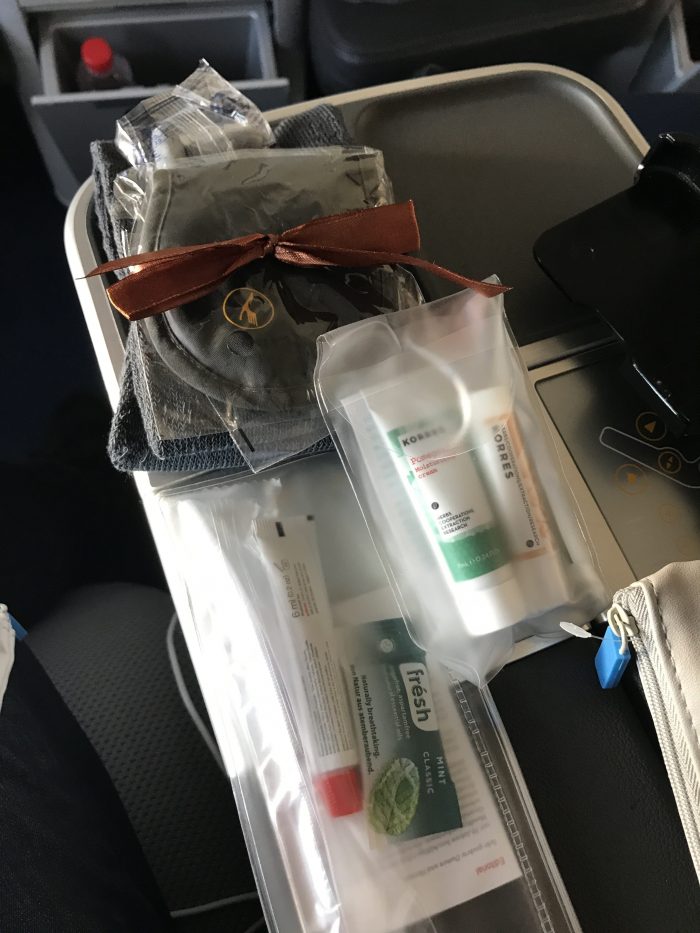 There was also a Bose headset at the seat. It wasn’t over-the-ear like on American, but it’s still better than some generic headphones. While boarding was continuing, I started watching Hidden Figures. I enjoy movies that tell historical stories that might not be well-known. The inflight entertainment screen was adequately sized, though not huge, especially given that it was not moveable. 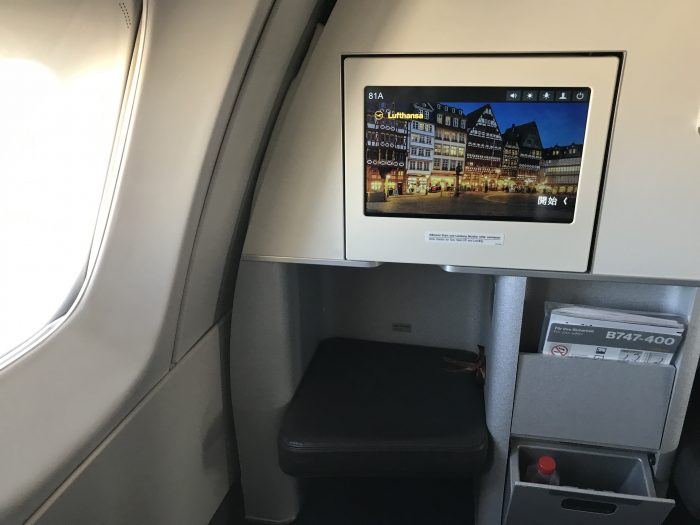 I also drank a glass of pre-departure champagne. It was Heidsieck Monopole Blue Top Brut. 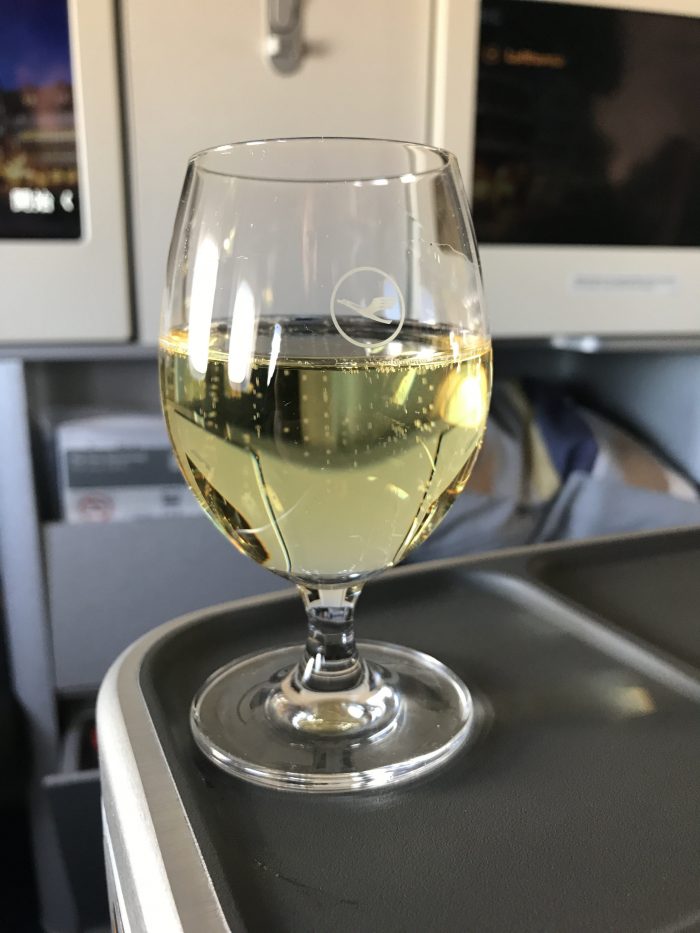 Eventually, we pushed back about 25 minutes late. Our scheduled flight time from Denver to Frankfurt was 9 hours, 5 minutes.

Service began about 30 minutes after takeoff. The nuts were not warm, but they were pretty tasty. They had lots of cashews, which I like. I ate them with a glass of red wine. A bit oddly, rather than to start things off, the typical warm towel wasn’t given until after the nut service. Errr… that’s probably not the best way to refer to this. 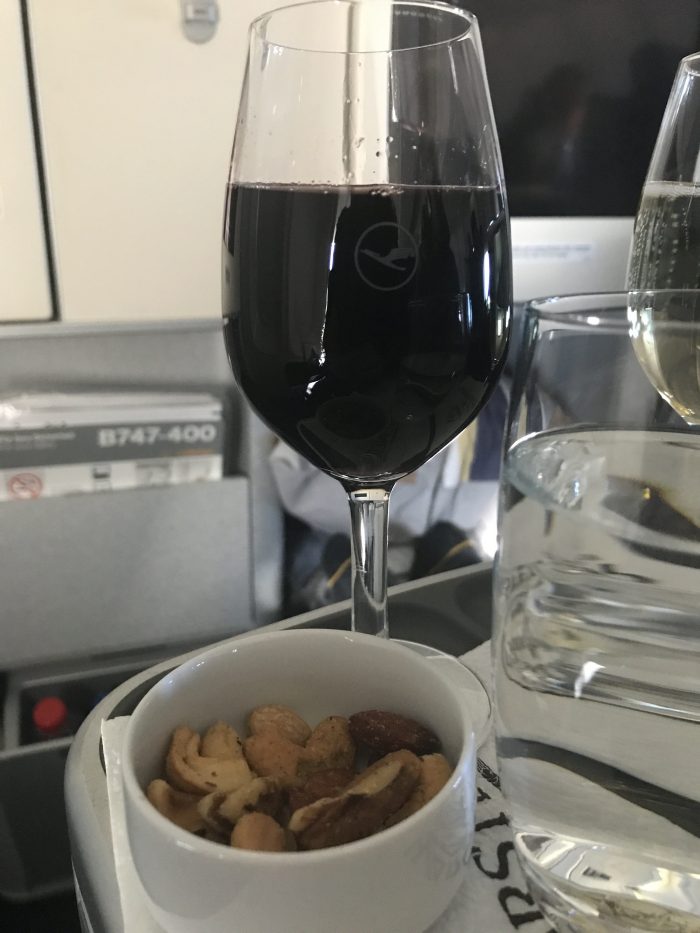 Here are the Lufthansa Business Class menus for my flight from Denver to Frankfurt: 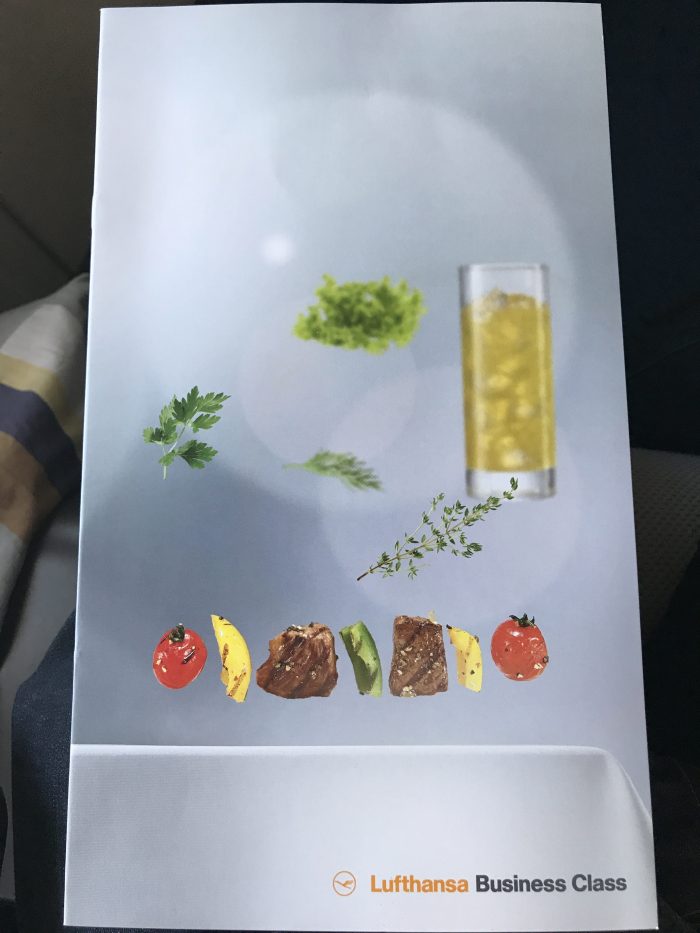 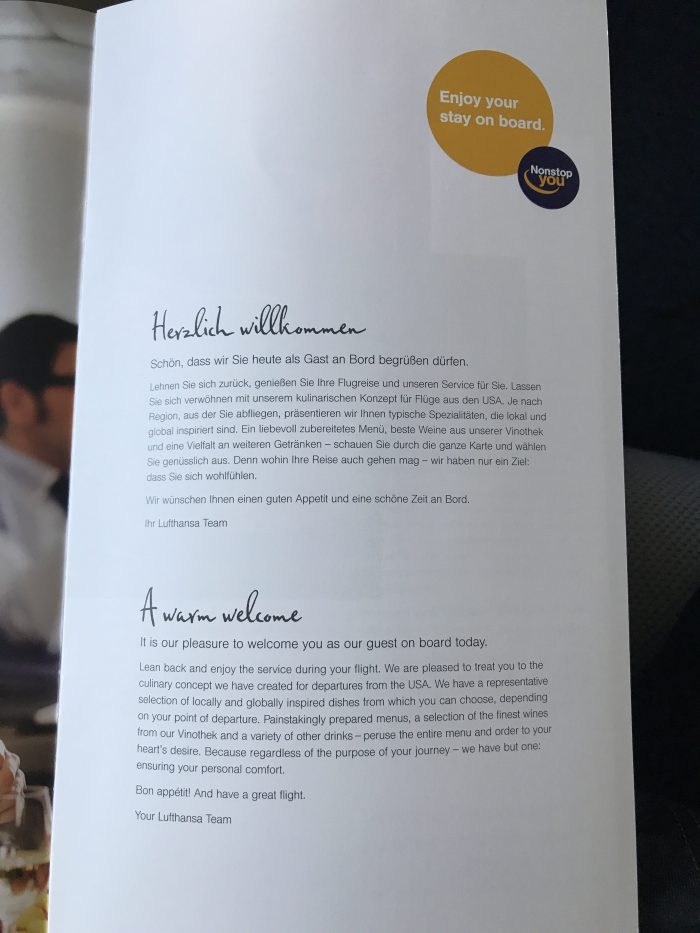 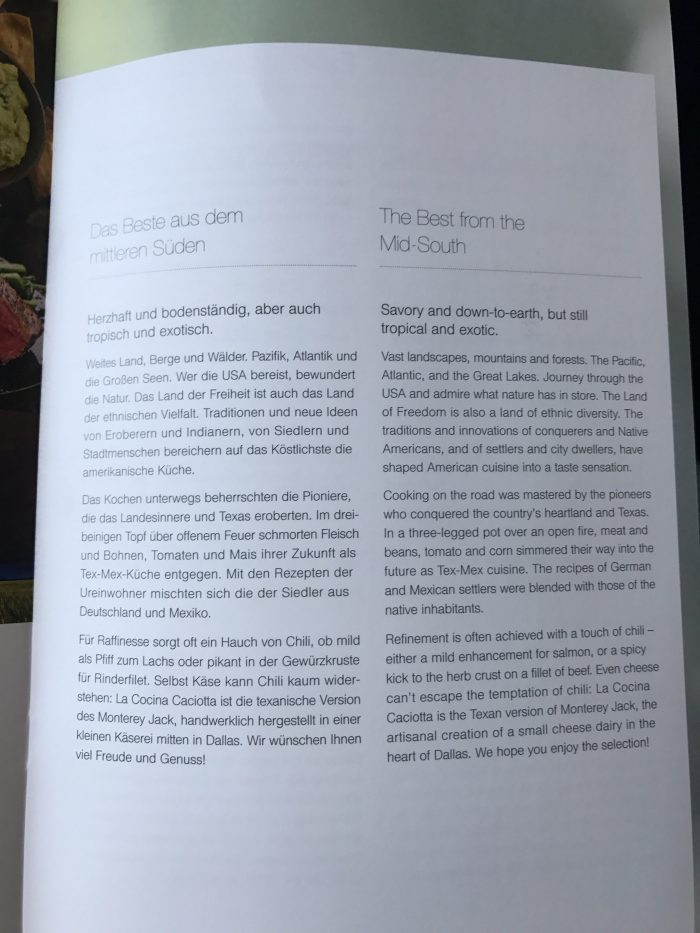 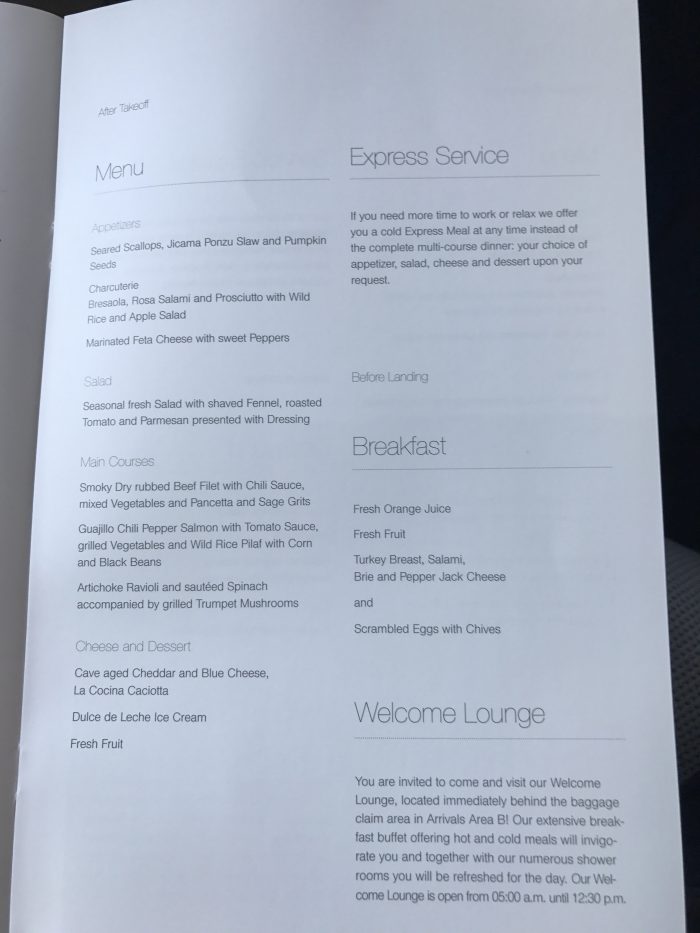 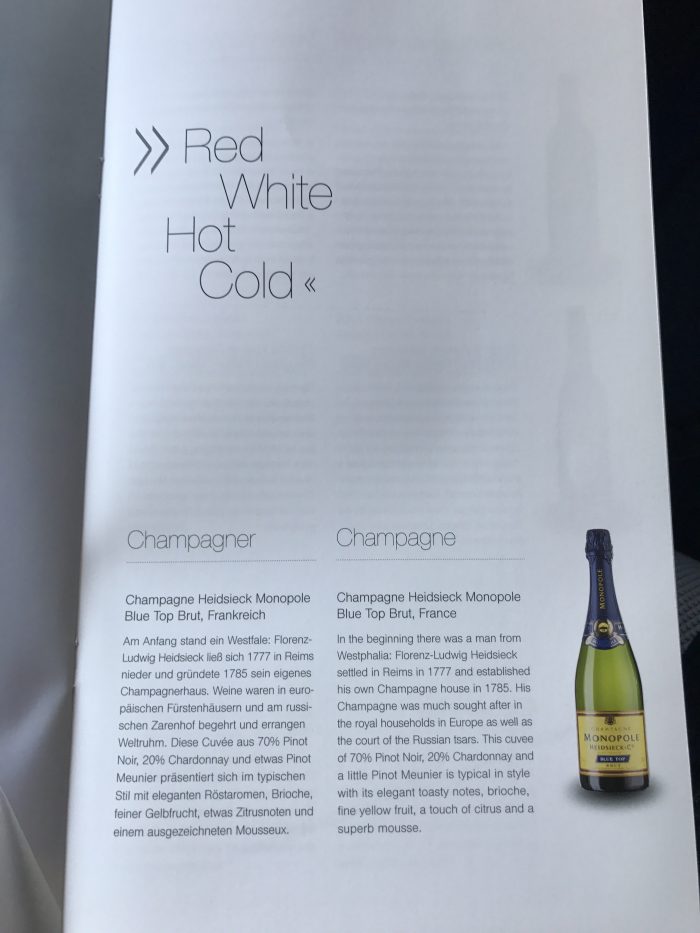 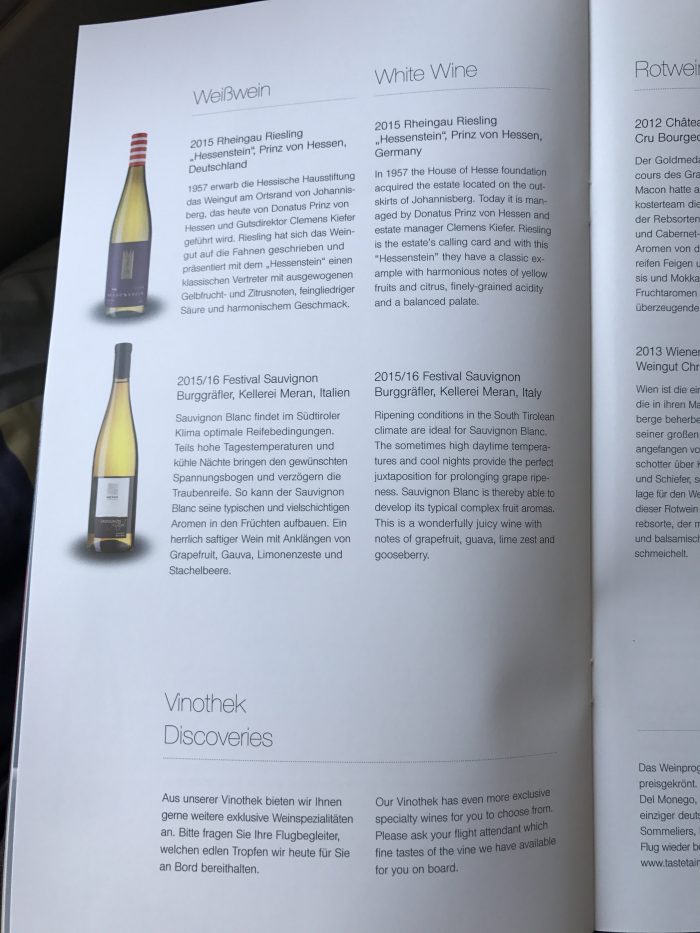 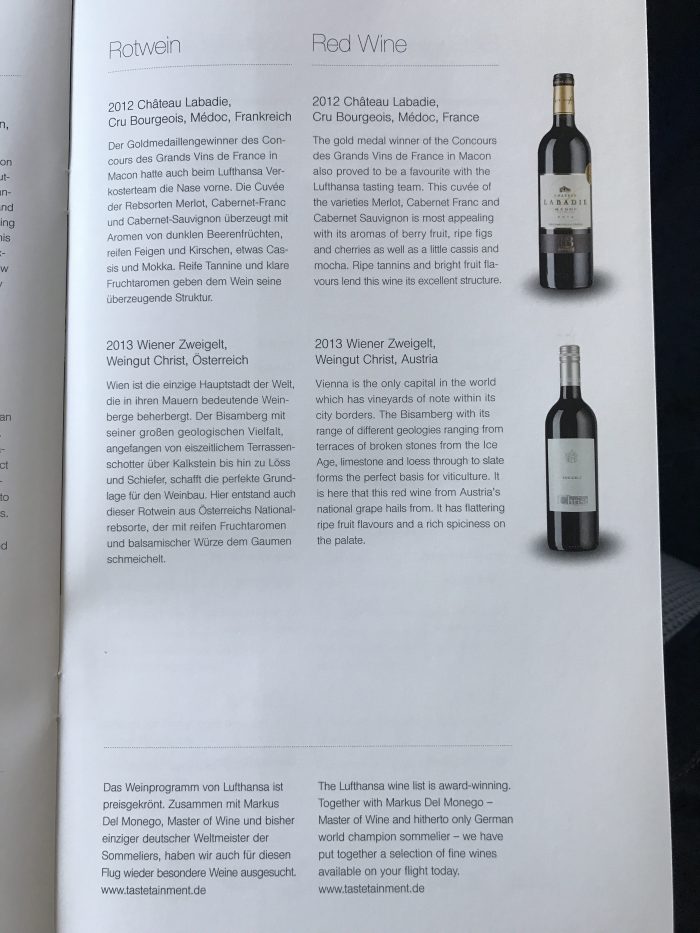 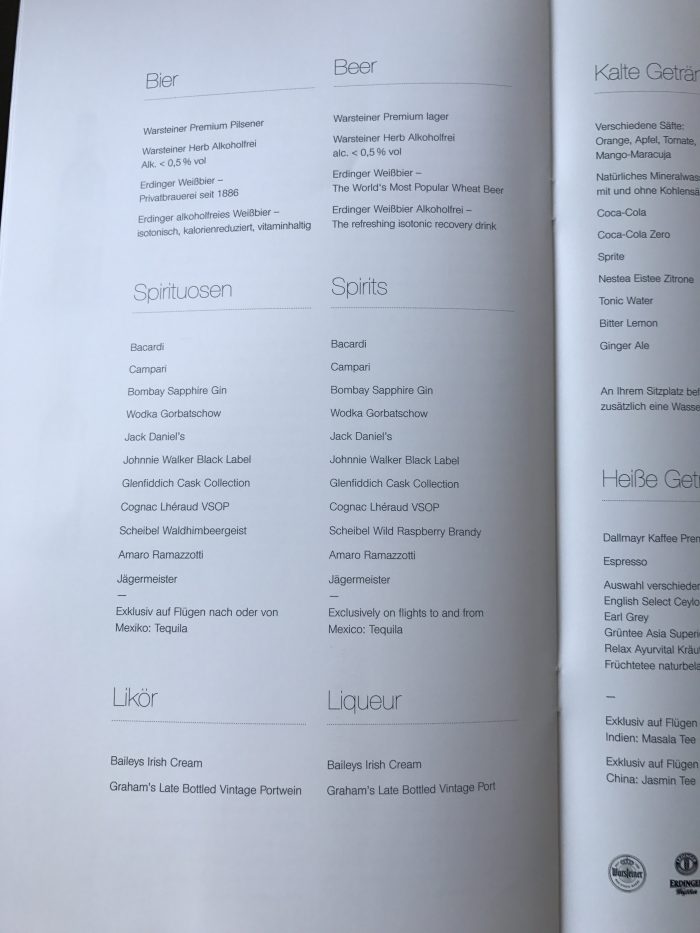 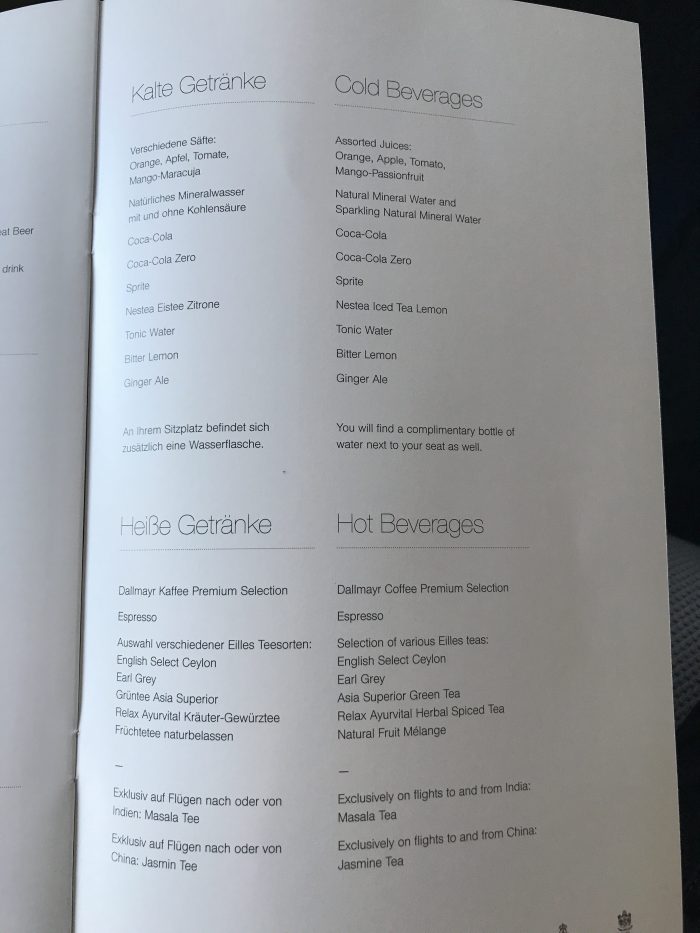 I opted for the charcuterie to start. It was a simple selection, but it was nice. It was served with a pretzel roll & garlic bread. 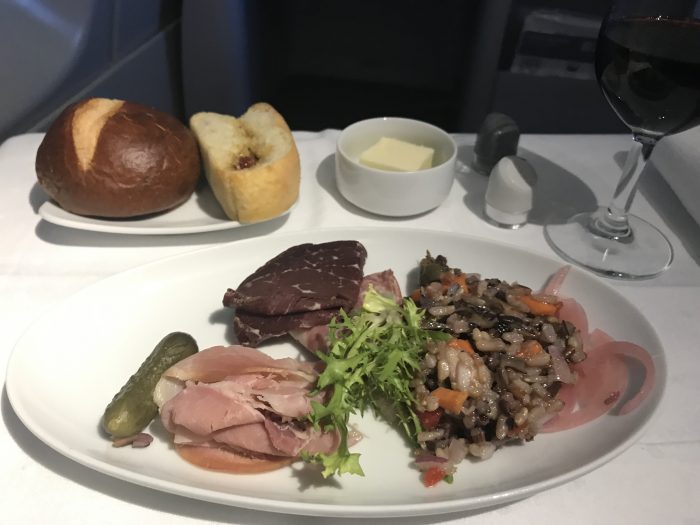 After that, there was a salad. 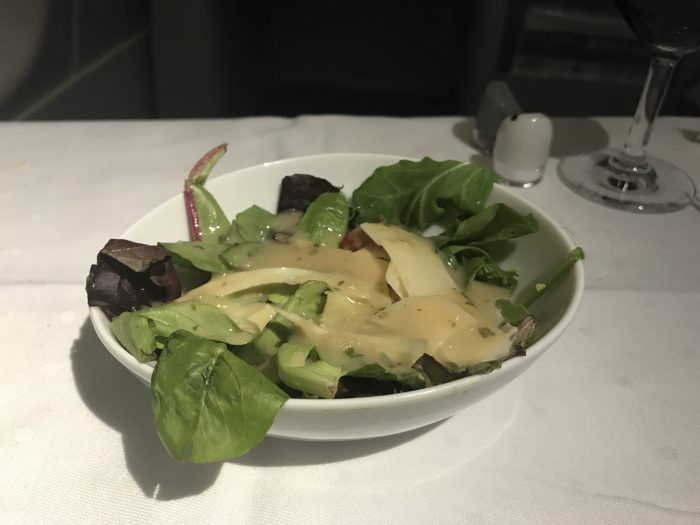 Between the delay & the fairly slow start to service, I had already finished a movie by the time my main course was served. I opted to put on Rogue One, since I had seen it & loved it, but didn’t want to get only part way through a movie if I wanted to sleep.

For my main course, I had the beef filet. It wasn’t bad at all, and the grits were quite good. 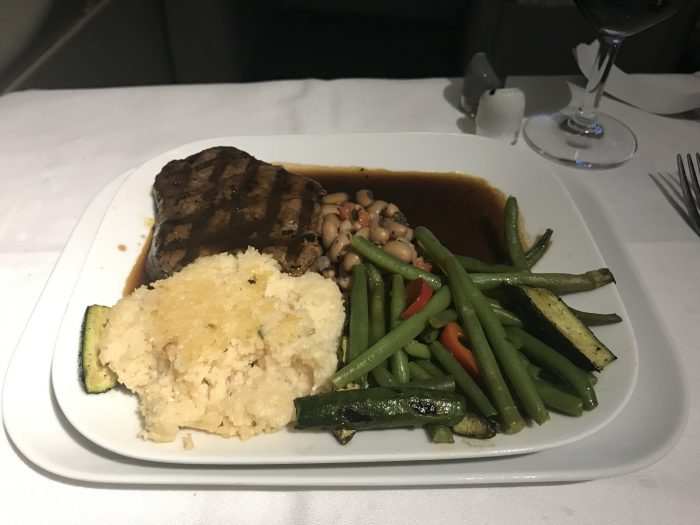 For dessert, I had a cheese plate and a glass of port. 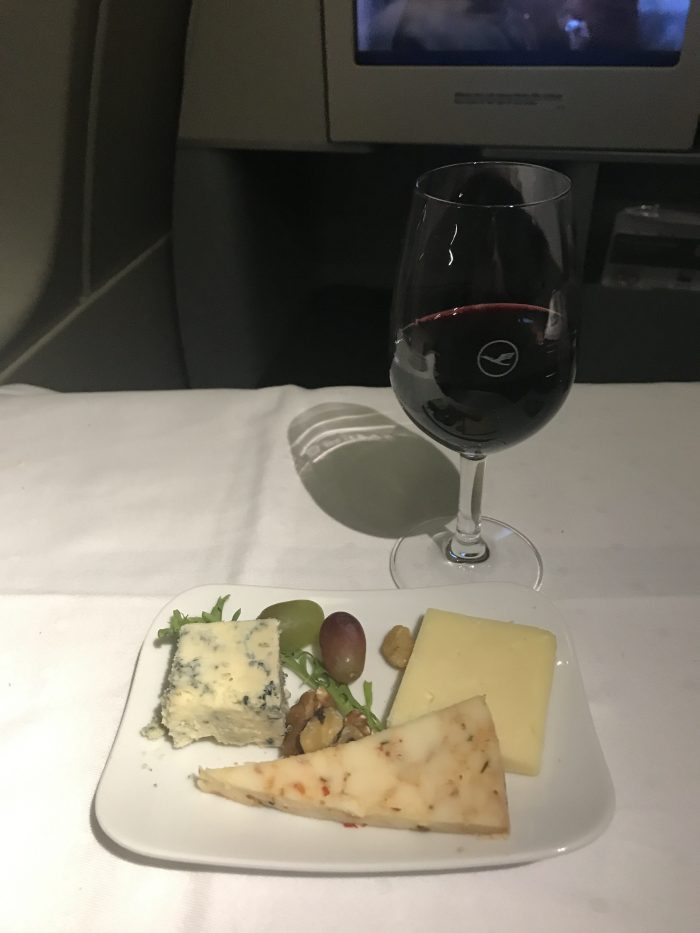 It was all wrapped up with a couple of Hachez chocolates. 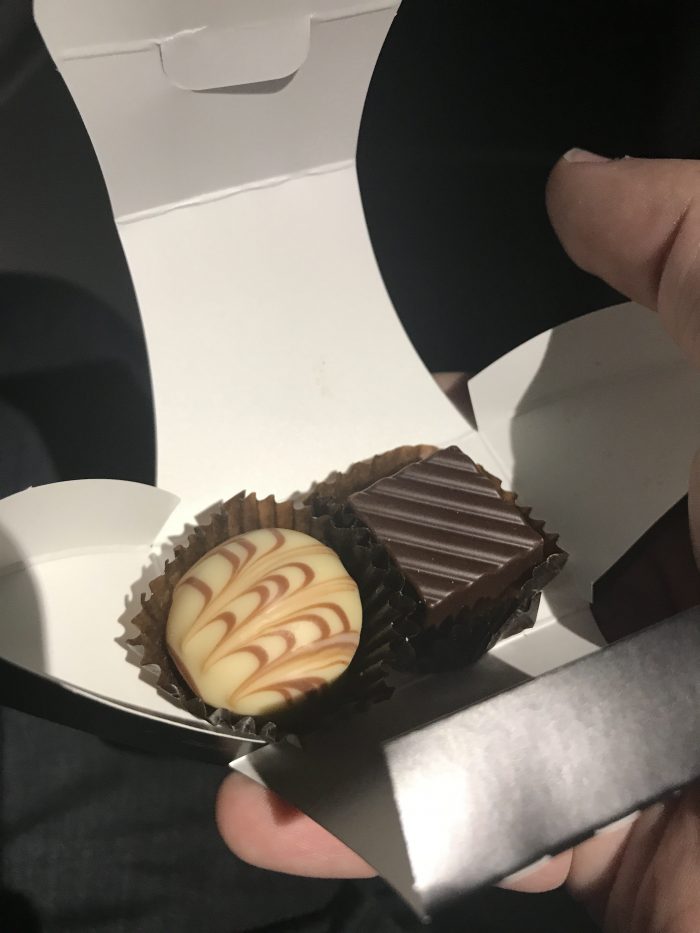 Meal service finished about 2.5 hours into the flight. I wasn’t in any particular hurry to get through it, but I’ve certainly had faster service on other flights & airlines.

With about 6 hours left in the flight from Denver to Frankfurt, I decide to try and get some sleep. The Lufthansa business class seat had a decent amount of space, though it was slightly tight at the shoulders. The bulkhead seats do have a bit more room than the other seats when it comes to space for your feet, as they aren’t limited to the space below another seat.

I managed to doze off, only to then have one of the weirdest inflight experiences I’ve ever had. I woke up to find someone touching my face.

It took me a few seconds to figure out what was happening. In his sleep, the guy next to me was dangling his arm across the center console into my seat area, and his hand had landed on my face. It wasn’t intentional (I don’t think), but it was creepy as hell.

I had trouble sleeping for the rest of the flight, since every time I started to doze, I’d start to feel a phantom hand on my face. The cabin was also quite warm. I don’t understand why airlines would not have fans at every seat. If you want to set your cabins to be warmer, fine, but at least give people an option if they want some air circulation.

Breakfast was served with about an hour and 15 minutes left in the flight. There were eggs, meat, cheese, and a fruit salad. I watched some Mr. Robot while the rest of the flight from Denver to Frankfurt completed uneventfully. At least nobody else touched my face. 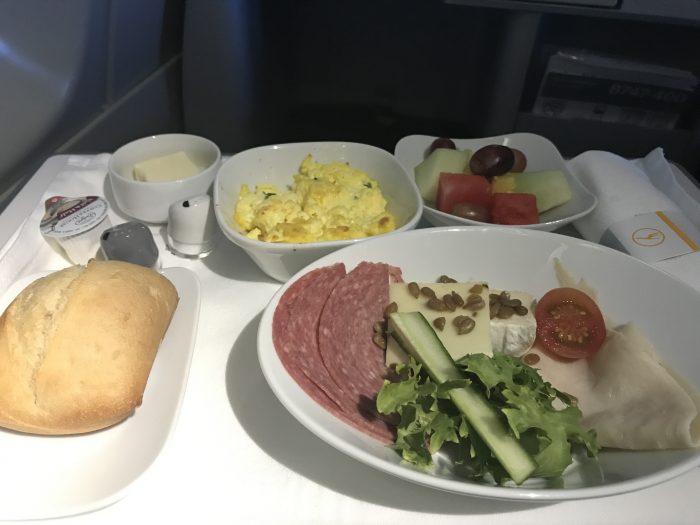 The last Boeing 747s are slowly being retired by most airlines. Smaller, more fuel efficient planes are the future of transoceanic travel. This is a good thing. But if you’re an AvGeek, and you’ve never managed to fly in the bubble, get a flight booked as soon as you can so you can cross it off your bucket list before the 747 is just a memory of the past. 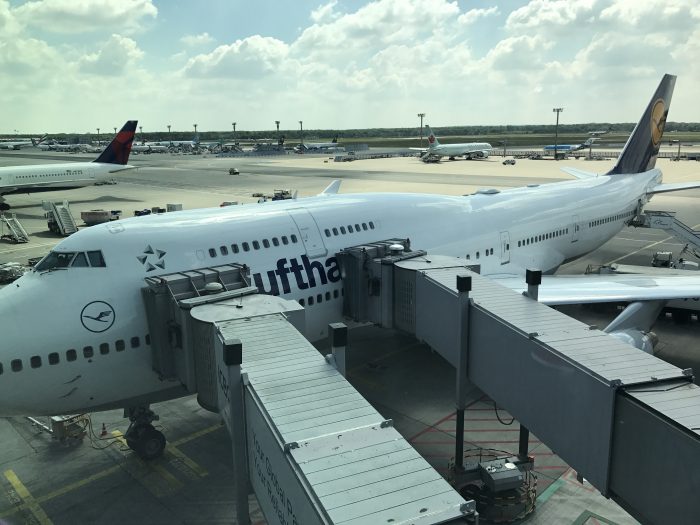 If you’re looking for things to do when you get to Frankfurt, check out my guide to a layover in Frankfurt or these tours below.